In light of all the ongoing debate about gentrification and decay and poor use of space along with the Truman Waterfront Park plans on on and on, I have decided to post a column from the venerable New York Times, quoted in a blog I read from my former home town in California. Bruce Bratton on Santa Cruz writes about the issues he sees plaguing his home town's main street... 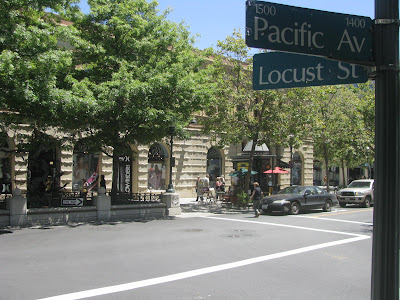 ... which has been suffering from identity issues that anyone in Key West could sympathize with. His subjects cover local-versus-chain stores, bums, dirt and encouraging locals to mingle with tourists...Duval Street? No, Pacific Avenue: 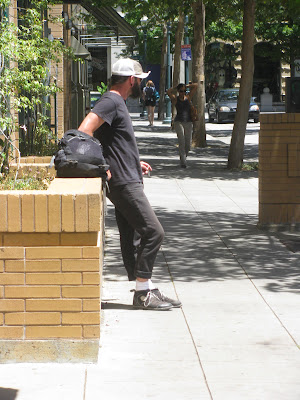 And now it seems New York is wondering how to handle Times Square which  when used  as a pedestrian zone has become a social free-for-all. The ideas contained within appeal strongly to me especially as tentative plans to prohibit traffic on two blocks of Duval were once mooted and then abandoned as merchants outside the zone feared it might be too successful. 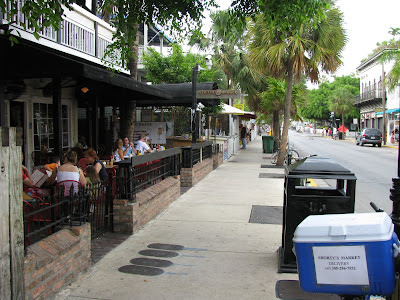 It sounds crazy doesn't it? Let me quote a snippet from an article published in the Key West Citizen of Thursday May 30th, 2013 b Gwen Filosa, quoting city Commissioners Bob Yaniz and Jimmy Weekley among others:
Duval Street could become a "festival street configuration," giving Key West the option to close it off to cars for an event, such as the upcoming Pridefest.
Without a price tag or a specific timeline, EDSA's designers laid out what they called a vision for Duval Street, one that keeps its unique character intact but opens up the city's economic engine to greater use.
Yaniz resurrected the idea of some type of pedestrian-only option for Duval in December, where a 6-1 vote set the designing in motion. Only Commissioner Billy Wardlow dissented, saying a prior traffic study showed the idea would create traffic congestion.
Last year, the commission killed an idea backed by Weekley for a "cafe district" along several blocks of Duval.
But that idea didn't die because of local critics, Weekley said Wednesday. Instead, some Duval Street business owners and restaurateurs were annoyed at not being part of it, to the point where the threat of a lawsuit against the city arose, he said.
"This entire corridor is important to Key West, not just a piece of it," said Kissinger. "We are now talking about the entire corridor, from end to end."
Well, that never happened nor will it I dare say, and that's a shame because now we get around to the New York Times and its haunting discussion of Key West's greatest "Third Place",  Duval Street. 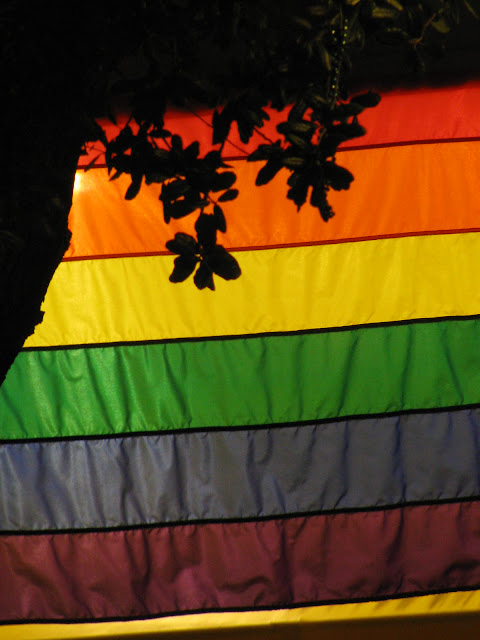 COPENHAGEN — PUBLIC controversy has returned to haunt Times Square. This time, it is the presence of body-painted, topless women, who call themselves “desnudas,” and are accused of polluting the public space by “aggressive panhandling.”

Heeding calls from his police chief to tear up New York’s new pedestrian plazas, Mayor Bill de Blasio responded by announcing a review of the entire project of pedestrianizing Times Square. That might seem an extreme reaction to a couple of street performers’ shaking down tourists for cash, but it’s because the affair has touched a nerve — a sense that somehow the plaza has made Times Square only more sleazy and vulgar than ever. 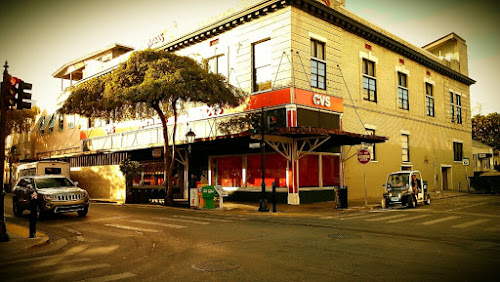 The kneejerk reaction of some city officials — to tackle the issue by returning Times Square to its old car-centric, traffic-first self — is unsurprising: We know how to manage traffic, with curbs, signals, crosswalks and signposting. But the answer to this topless crisis is not to act in haste and go back to a Times Square gridlocked with yellow cabs and black S.U.V.s.

Instead, the lesson is that painting the pavement blue and closing it to cars is a start, but reclaiming space alone is not sufficient to create the sort of vibrant public plaza we’d all like. That requires real stewardship. Civic culture needs cultivating and curating. Unless we do so, public space can become a public nuisance. 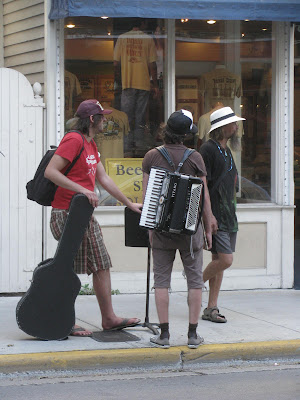 Many of the city’s parks and plazas are in far better shape today than they were 10 years ago. The pedestrianization of Times Square was the flagship, but the NYC Plaza program that began under the administration of Mayor Michael R. Bloomberg (and which our architectural consultancy helped initiate) has created more than 50 new plazas, in all five boroughs. Along Broadway alone, five sites opened up an area equivalent in size to Bryant Park — space that is free for everyone to enjoy. 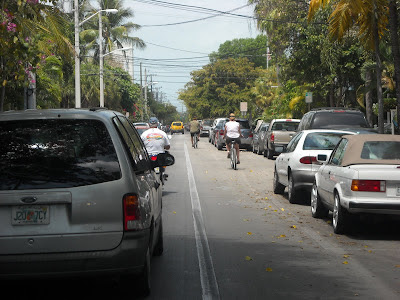 Like bike lanes, these innovations attracted some criticism at first, but today they have largely been accepted. 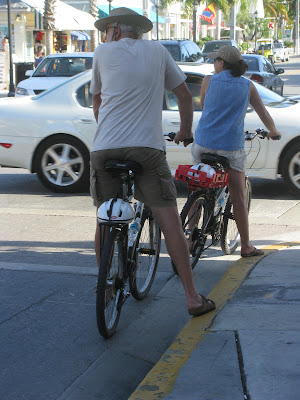 Before the changes, Times Square had no square — even though, for decades, pedestrians vastly outnumbered motorists passing through the area: 90 percent of the users were being squished into just over 10 percent of the area. After the changes, the rate of injuries went down (for pedestrians, but even more so for motorists), traffic flow in Midtown improved, and local businesses thrived — a fact reflected in steeply rising values of retail space. 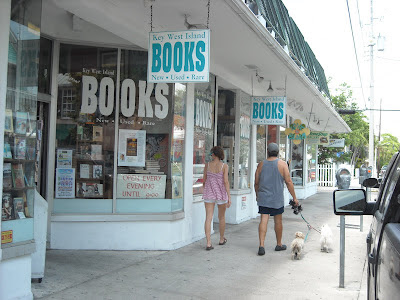 It is a measure of that success that Times Square is now such a bustling place, walked by up to 480,000 people — tourists and locals — every day. The plaza program has made New York a leader in the international movement to make cities more people-friendly, while remaining pragmatic about cars. Mr. de Blasio has carried through his election campaign theme of a “tale of two cities” into the OneNYC plan, an equitable vision for ensuring access for all residents to everything New York has to offer. 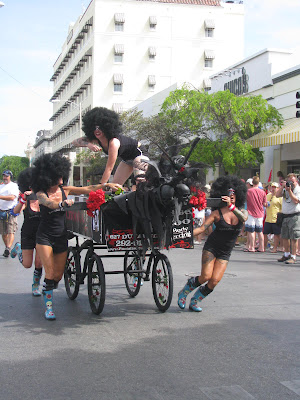 That so many people are clamoring to spend time in Times Square means the city faces a new challenge of managing this vitality — one that’s very recognizable from the experience of cities across the world. Here in Copenhagen, the process has been evolving for more than five decades since the city first pedestrianized a street in 1962. Urban space develops organically and in sync with a city’s communities if it’s nurtured properly, but we’ve learned that this requires cities to keep reviewing how that space is designed and regulated. 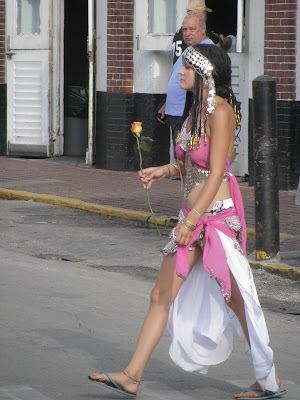 There must be mechanisms for maintaining a balance of activities, to avoid one particular group of users, like panhandling performers, dominating. Sometimes, that means regulating activities that are a nuisance or offensive. But imposing conditions or constraints is only part of the solution.

Cities can designate certain areas for street performances and restrict them to specific times of day. They can also require performers to be registered or licensed. Many cities already do this: In London’s Covent Garden, for example, performers audition before they can use the former market’s pedestrian plazas, and a nonprofit street performers’ association works with local managers and government to maintain standards and keep things running smoothly.

The city could invite cultural institutions to curate exhibits and shows in Times Square. This spring, the city government in San Francisco opened up Market Street to a three-day festival curated by the Yerba Buena Center for the Arts. Installations designed by local people invited passers-by to interact with them and participate in the street life. Some exhibits will become permanent features of the downtown area. 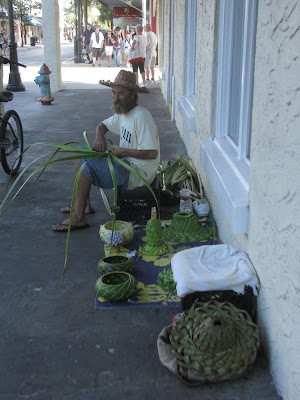 Another imaginative example of how city space can be transformed is the “Paris Plages” project in France. Promenades along the Seine are turned into beaches with tons of sand and palm trees — the scene complete with deck chairs, umbrellas and ice cream vendors. The city even sponsors sand castle-building classes for children.
Public spaces like Times Square are the great equalizer in cities: Improvements in the public realm benefit everyone. The city should view the challenge of Times Square’s pedestrian plaza not as a reason for retreat, but as a call to create a diverse, dense, intense experience of public life that we can all enjoy.
Posted by Conchscooter at 12:00 AM No comments: