Meeting Of The Minds

It is a very odd thing but there are people who dip into this blog from time to time and excoriate me for not knowing stuff they think is important - plant names for instance, this despite the fact that I admit freely and publicly I am useless as a botanist among my many other failings. Just because I live here doesn't mean that magically I will become well versed in the details of life that interest other people. I can't fish, no actually I won't fish, nor will I kite surf or scuba dive (though I am qualified oddly enough). Nor will I ever become a parrot head. Apologies all round but I have but one life to live and the path I stumbled down led me in a different direction. 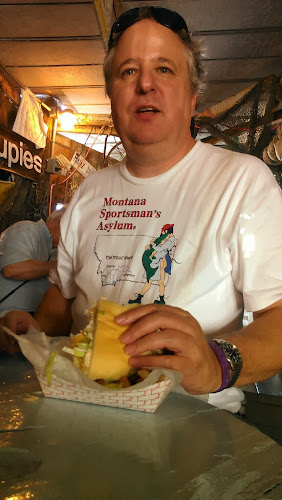 Bob is a parrot head and he lives in Montana where he is a third generation Conch. His grandfather jumped a German ship in the late 19th century and for reasons known only to himself made a beeline for the most mountainous least hospitable climate he could find. Well, as Bob says at least he didn't choose North Dakota or Minnesota whose winters make Montana's look positively tropical by comparison. That's his story and he's sticking to it. 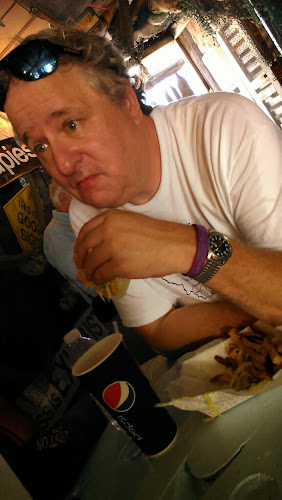 He bought me a fish sandwich (special) at Buddy Owen's Fish Wagon and regaled me with stories of the frozen north. Livingston has been discovered apparently and Hollywood decamps there for the summer. Like Key West winter is for locals. Bob told me about his winter chore of leaving work at lunch to cross the street to his parked car where he ran the engine long enough to warm it up to prevent it freezing solid before it was time to go home in the evening. Of course he could have walked the five blocks to his house but the first time he tried that it took half an hour of King Wenceslas style trail breaking through enormous snow drifts. I find these sorts of conversations rather startling as I wonder how I plan to cope with the first severe cold front of winter. The one that drops temperatures below sixty degrees... 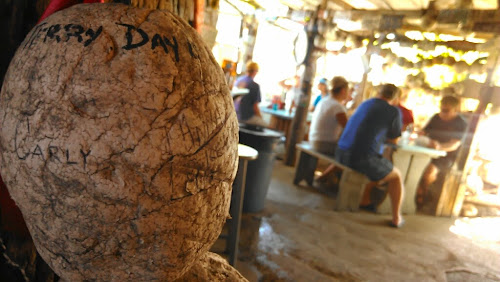 Luckily I wasn't alone in my parrot head incomprehension. Gene and Nancy had been having lunch at the table next door and came over to say hello. Well bugger, I was trapped. Gene said he thought it was me glancing down at my racy Croc footwear (half price sale on unmanly colors in extra large sizes) and he summoned up the nerve to introduce himself. He put me well in my place noting I was rather sarkywheel he dropped a comment five years ago and he never bothered to again. I herewith publicly flagellate myself and beg forgiveness and encourage commenting. I just don't know what to say back (my wife hits me over the head repeating "just say thank you, dolt!"). 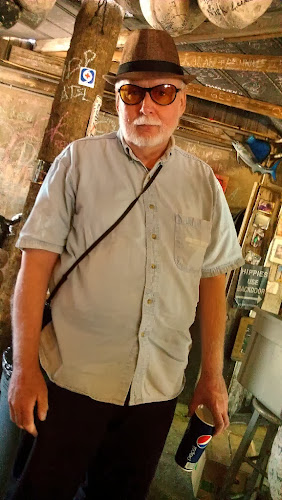 His wife Nancy was very sweet putting up with the duffers in the corner chuntering on without her. They're in town for a month so God knows what mischief they will get up to. It turns out Gene isn't actually a parrot head though he was delighted to learn from Bob that the Duval Street gathering tonight is a free street concert. It's a crappy picture but meeting people gives me nerves... What can I say? 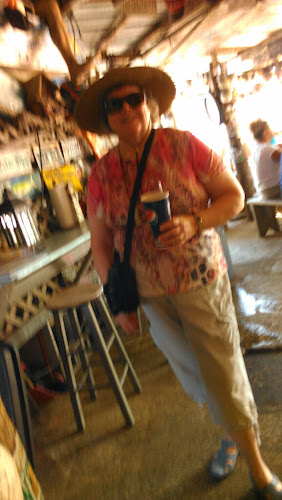 We took a walk along the waterfront as Bob reveled in the October sunshine. His journey from Livingston took twelve hours such is the miracle of flight, transporting him from a full Montana blizzard to this: 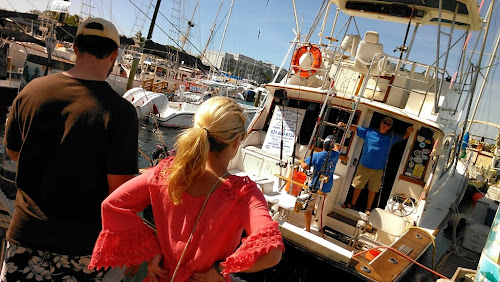 It turns out that being a parrot head has nothing much to do with Jimmy Buffett these days according to Bob, so I asked him to pose in front of the former guru's last little piece of old Key West, Shrimp Sound recording studio. Bob's conversation was peppered with far more references to Howard Livingston and other bands that hold the interest these days of the parrot heads. Supporting up and coming talent and raising money for charity is the name of the game. Jimmy Buffett's rather condescending attitude seems to have driven him out of their camp. Personally I've never understood the fascination with him but like so many things Key West my tastes tend to run wide of the local mark. 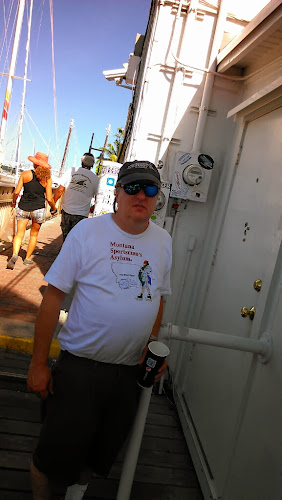 At least on that score I could be a parrot head apparently. However my natural shyness precludes me from the notion that traveling to distant places to meet a roomful of strangers and thus turning them into friends could ever be at all appealing. Indeed it holds about the same appeal for me as having an amateur appendectomy on my kitchen counter. Yet for Bob the extrovert, his label, parrot head gatherings are a chance for him to leave his beloved Montana for a few days and get together with his widely scattered friends. Brave man. 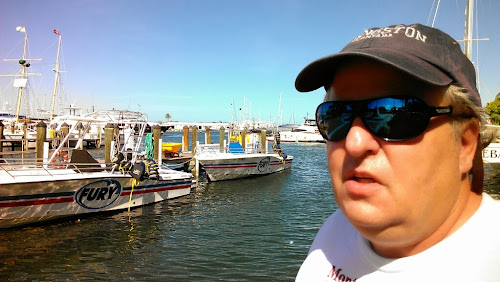 He recently retired from a life working as a political aide and campaign worker in his home state and he looks forward to more of the same kinds of gatherings on his terms now. Look out New Orleans, Bob has you in his sights...Meanwhile he will live it up for a few days in Key West, "I'm not much of a drinker," he mentioned in passing, thus neatly skewering another parrot head myth, before going home to a snow drift, several cords of wood and a crate full of books which have been waiting patiently for his retirement. Have you thought about renting a room here for a couple of months? I asked appalled at the image in my mind of some kind of Jack London survival experience in the ironically named Paradise Valley outside Livingston where bears hibernate and snow gets so deep four wheel drive Subarus can't travel. Oh no he said I want to keep an eye on my parents and I'll get into town every couple of weeks. He really did say that. You can imagine what I was thinking. I mean really, people think I am rugged because I like living at Mile Marker 27 and I have a forty minute commute to my job and the fleshpots of Key West. I am about as likely to get hypothermia on my Bonneville even in a rain storm as I am likely to encounter a bear. Never mind snow. 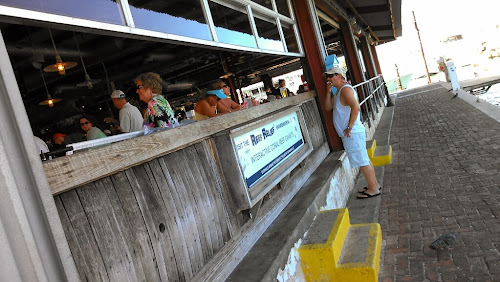 Bob would have it no other way. He has friends in Livingston and they must be magnetic people indeed. I have never had such a sense of place and it makes my attachment to the Lower Keys feel rather fraudulent honestly. I'd flee this joint if things were a tenth as rugged as life in Livingston. All Bob says is they have it a lot worse in North Dakota. I can hardly imagine. I drove from Fargo to Bismark once in a blizzard with my crazy sister in law for someone's grossly mis-timed wedding, and the next day the sun was out and it was twenty degrees. I was under dressed (of course) in everything I owned, but the locals, I swear this is true, were out and about in t shirts enjoying the break in the weather. For the first time in my life I was actually looking forward to getting on a plane to escape the lunatic asylum. And I still married her sister, in Santa Cruz California, in August, in shirtsleeves, outdoors thank you very much. 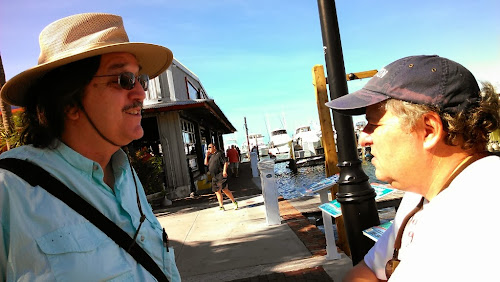 Lauren is from San Francisco where he works with electrons and plays with a guitar. He and Bob are friends in this weird and wonderful network from hither and yon. For them Key West is a myth, a dream, not a place at all. It's a wonderful thing and I admit there is a wistfulness lurking somewhere that I can't let myself in. Unfortunately I live here in reality and like a television show set in a place you know, the writer's imagination keeps butting up against the hard reality that kicks you in the posterior daily, the reality of high rents low wages, drunks, overcrowding and lack of amenity. Hmm...

Shit, let's be honest here for a minute, I'd much rather live here with all the daily nuisances of reality than live in a place where I have to plug my car into a socket to keep it alive and only dream of Key West from inside an igloo. Forget that, I'm just not tough enough, though I am entirely tough enough to ride 27 glorious miles each way to work on a road that went to sea, in a way unlike any other.