I was standing leaning against my car enjoying the night view of the stars overhead, while a cool winter Florida breeze blew through the mangroves, over the salt ponds and over  my bare skin. I wasn't quite sure if I was cold yet but I knew it was too soon to rein Rusty in as he snuffled through hurricane debris and sniffed the mangroves and chased his tail. Three o'clock in the morning on an apparently empty back road in the Lower Keys means you don't expect anyone to be around to run into your dog. Except that as I stood there looking at the stars and listening to the leaves rattle I heard a weird puffing sound accompanied by a  flat series of thumps.  What could that be? I asked myself as it got louder and closer in the pitch dark... 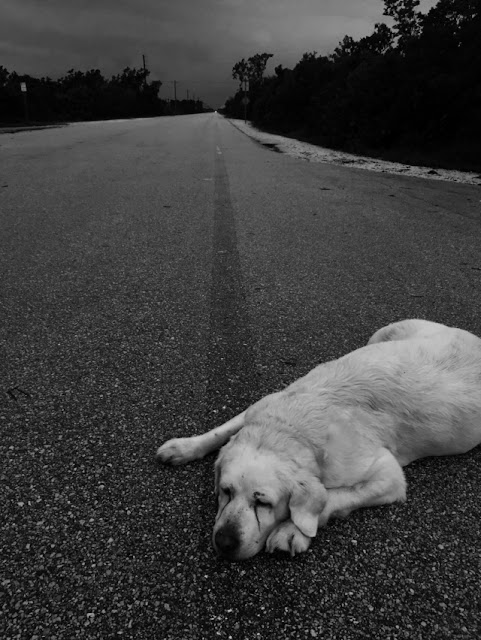 The reason I found myself on the road at that dark lonely hour was that I have been forced to do lots of overtime shifts this holiday season. I come home in the early hours to the usual rapturous welcome from my small brown dog, wide awake after several quiet hours of refreshing sleep alone at home and now ready to go for a walk. My old Labrador pictured above liked her twelve hours and Cheyenne was not much given to middle of the night walks but young Rusty is always ready. My current stretch of overtime shifts ending at 2 am is a tonic for him. So when I pull up under the house on the Vespa a small shadow detaches itself and we pile into the car and off we go. I enjoy star gazing at night and Rusty runs up and down some deserted piece of road which I have chosen with an eye to finding as little light pollution as possible, thus far from human habitation. 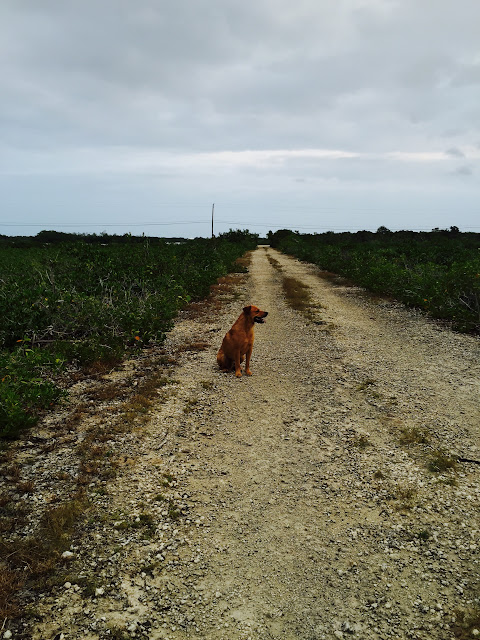 The back country of the Keys is pretty unvarying, a mixture of shrubs and salt water ponds bisected by a few roads, miles of darkness at night and distant lights scattered here and there, the only sound the wind and sometimes a delivery truck grinding down the Overseas Highway which is never more than a few miles away. In these flat lands sound carries on the southeast wind. So the other night  I drove out into the wilderness followed to my surprise by another car. Even more surprising was when a spot light came on and illuminated my car, and the inquiry as to whether I was OK? Actually I was not drunk, I wasn't speeding and I was simply walking my dog in the middle of the night. Odd but not illegal. Take care he said as he sped off to fight crime elsewhere in the county. 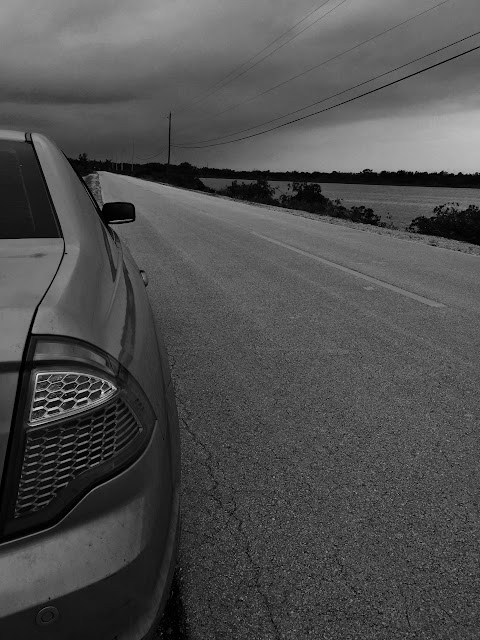 Unlike about everyone I know I have no opinion on the second amendment, neither for nor against. As far as I am concerned feel free to own as may guns as you like though I choose not to so do. I prefer to go about my business not in fear of my neighbors and the idea of shooting someone is beyond my ability to imagine. I prefer to live by my wits. Equally  Rusty is a gentle dog though he does carry war wounds from his time on the streets of Homestead. He is missing a  tooth and he has a permanent scratch in his fur on his head. When I rescued him he had a terrible fear of large dogs and he always slept with one eye open. He'd have carried a  gun if he could, I have no doubt as he was a nervous wreck. He was irresistible in the ad for his adoption: 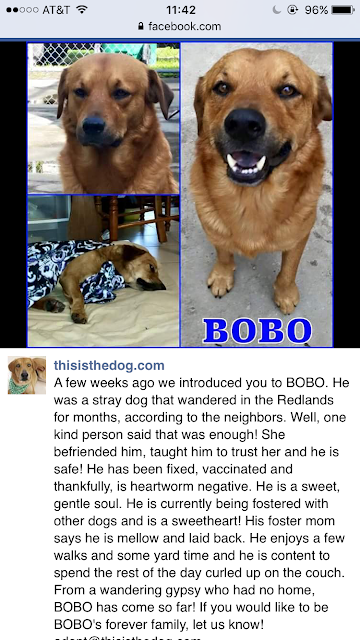 These days young Bobo has turned into Rusty a confident and outgoing dog who loves long walks and is much more self assured than you might expect from his miserable early life before thisisthedog plucked him off the streets of Homestead. Early on he developed a bond with me that he showed off one day when I was working outwith my trainer Sean. I had tied him outside the gym on his leash while I got on with sweating. Sean brought out some straps and was illustrating an exercise that involved me pulling against him  using heavy rubber straps. Rusty was having none of  it and he chewed through his leash and in an instant was at my side to protect me. Sean was impressed by his willingness to defend me and I was quite surprised, but he's done the same sort of thing when my wife is home alone with utility people and the like. He always puts himself between them and keeps an eye on her. 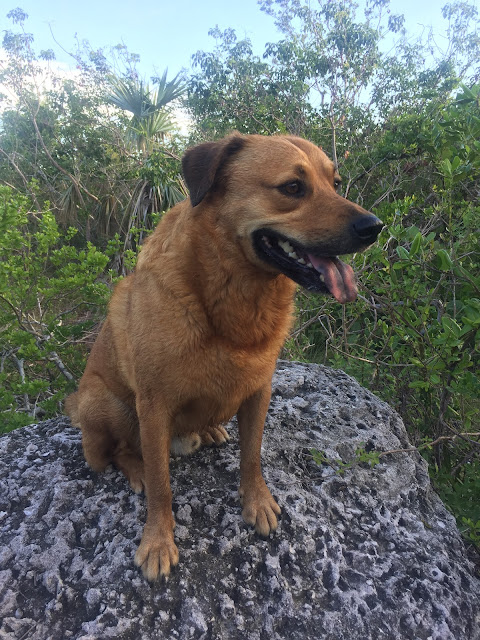 So there I was in the dark unarmed and without my bodyguard listening to the sound of some approaching thing, a bear perhaps or a zombie or some other being that threatened to harm me approaching with rasping breath and heavy footfalls. The stars were extraordinary especially as the moon has been in its new phase this past week and the sky has been a canopy of twinkling lights. I'm not an astronomer but I can see the Great Bear and thus find the North Star and off to the west I am pretty sure the line of Orion's Belt is lurking. One night recently I thought I saw the International Space Station flying across the sky, a fast moving unblinking spot of light, distinct from twinkling aircraft and stationary stars. All that stuff going on overhead and  hardly any light at ground level. 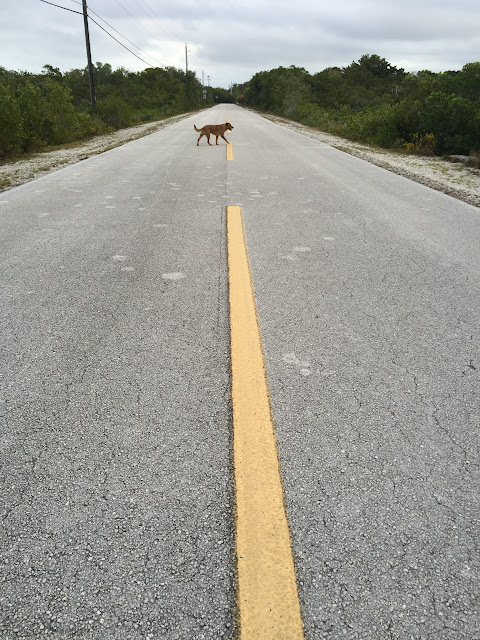 Finally in the cone of my flashlight I saw a man speed walking up the road. I apologized for blinding him and he apologized for not carrying a  light and he was gone past me back into the darkness the other side of me. He was an African American in a light colored shirt speed walking as though on an exercise program. He was gone before I had time to wish him a pleasant evening or morning. Weird, I thought, what an odd time of night to be getting exercise. Mind you I was out walking my dog...after a  fashion. Actually Rusty was off walking himself checking smelly hurricane damage. 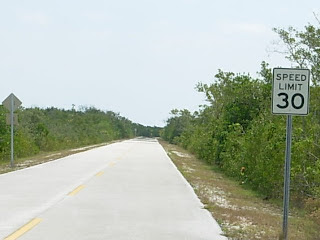 After about forty minutes the no-see-ums had woken up and were giving my ankles hell. I am told gin is an excellent way to discourage the little bastards from attacking but I had no gin and I was ready for bed. Rusty apparently was not. I whistled and he ignored me.  Except I suddenly heard the huffing and puffing again, as though summoned by my call. The exerciser was back! Sure enough in the cone of my flashlight there appeared the fast walker and I had time to see he was a young-ish black man, sweating, but this time he was followed by two yellow eyes.
"Hullo" I said. "I see you found my dog..."
"Your dog? he replied puzzled, "I don't like dogs." Good I thought, so much the better I'll have no fear of you kidnapping him then. I assured him Rusty was there right behind him and indeed my little protector was silently stalking the perceived threat. I opened the rear  car door and Rusty came up close still watching the walker before he jumped obediently into the car. It was oddly reassuring in the middle of the dark empty road to have my bodyguard there alongside me. 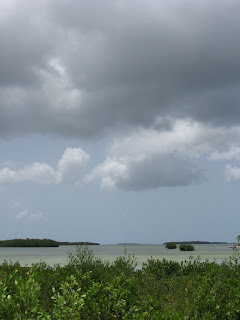 The negative stereotypes of young African Americans are legion, and frankly I find them embarrassing. I suppose I should have been afraid of the young man but he was panting heavily from his forced march and I felt bad for him when he explained he wasn't actually exercising but he was out looking.
"Can you give me a ride home?" he asked panting. I laughed "Of course I can, but you have ride with my dog..." I put Rusty on the back seat and the panting man and I shook hands and exchanged names as you do. I asked what on earth he was doing out here in the wilderness without even a flashlight. He said he was looking for his girlfriend.
"I thought she might be up the road" he said. "At the boat ramp. But she wasn't." We sat in silence as I watched the road and Rusty sat up watching my passenger. My passenger looked out the side window which he'd opened no doubt to dissipate the smell of dog. 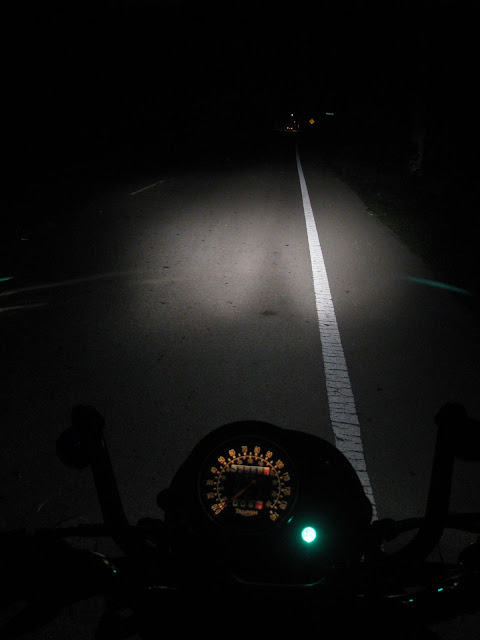 It was awkward of course but with all my time in a 911 center I know where people go when they walk off in a  huff and in a town like Key West filled with lonely people and hotel rooms revenge sex is a big part of the domestic calls we get. Out here in the middle of more or less nowhere I wondered what on earth my passenger thought was going on. He was sweating heavily and tired, partly I suspect from emotion. Wherever she was he had no clue but we both knew to suspect the worst. I was glad when I arrived at his front door and dropped him off. Good luck I said sharing his pain for one short moment. 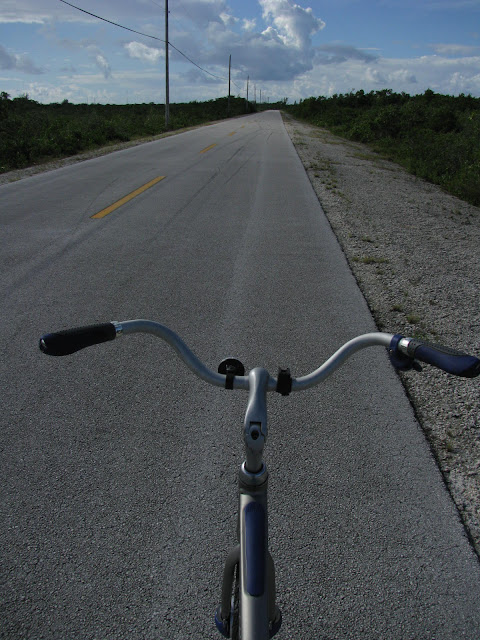 When I told the story to my colleagues at work they looked at me as though I was crazy. I talked to a guy in the middle of the night and gave him a ride!  Never in life - they looked appalled. Actually the guy was perfectly pleasant and very worried and I was glad to help him out. But on the back seat I had my furry brown bodyguard so I think I was neither brave nor crazy to pick up a hitch hiker. Of more interest to me is what innocent explanation the missing girlfriend might have come up with to explain her disappearance. I bet it was an excellent version of events and I shall never know what it was. Maybe if Rusty and I go back some night she will walk by and tell us the other half of the story. Maybe.
Posted by Conchscooter at 12:00 AM No comments: