I do believe the Avenues of Stock Island will be exempt from the development plans being enacted for the rest of this working class island. I was out early one morning, after yet another downpour that filled low lying land, seen here at Bernstein Park looking more like Bernstein Lake. 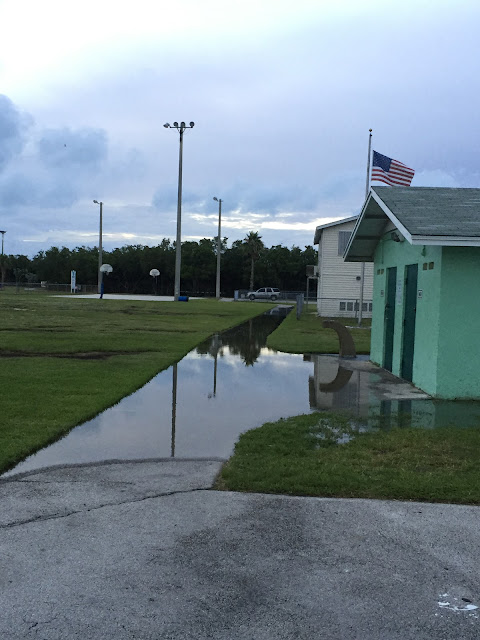 The Avenues are where people buy own and hold private homes on actual lots unlike much of the housing on Stock Island which tends to be a mixture of apartments, public and private and trailer parks where the land is currently slated for development. 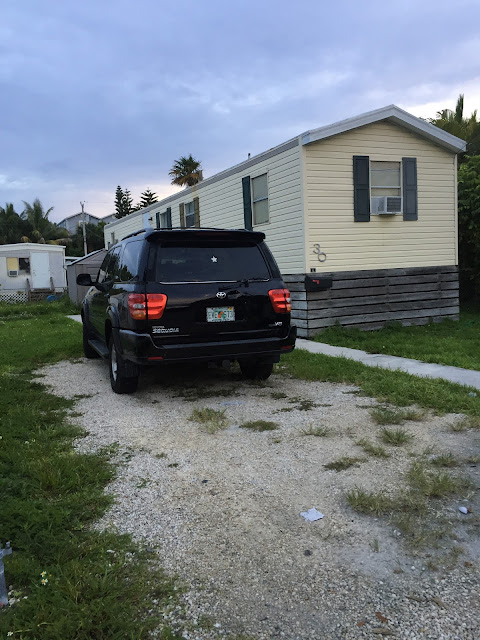 There are of course lots of trailers here with some concrete block houses and manufactured homes on stilts as well. 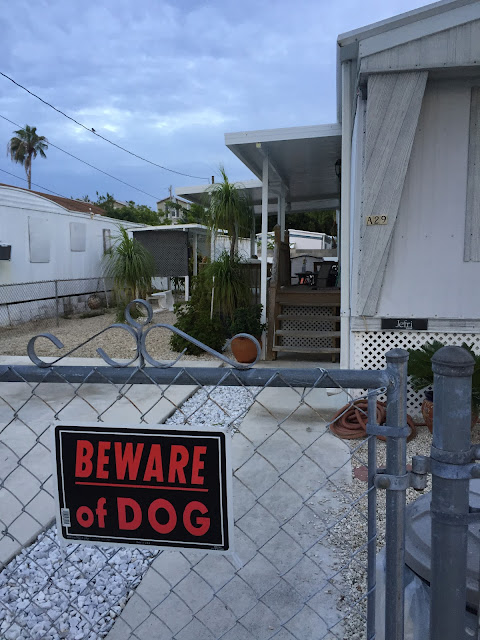 Its quite an urban setting for all that Stock Island is unincorporated, lots of homes packed into the street. 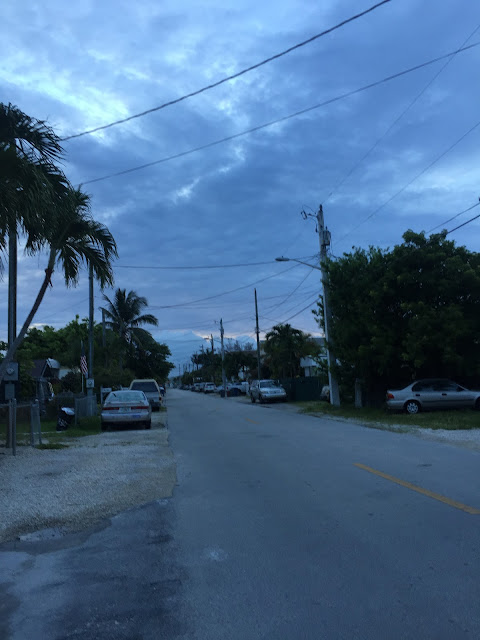 There are dogs on chains on Stock Island and I have seen them outside some homes much to my discomfort but I saw none this day (Yay!). However I did see this which gave me a shiver imagining its former occupant: 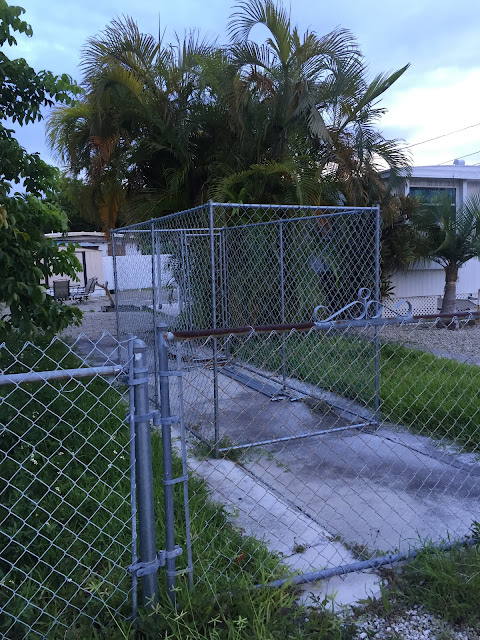 Mind you, not all humans live a whole lot better which is worth remembering when animal cruelty crosses your path. To me this rates as a hutch with air conditioning: There are newer homes here and a few years ago you'd be hard pressed to but one for less than half a million dollars. 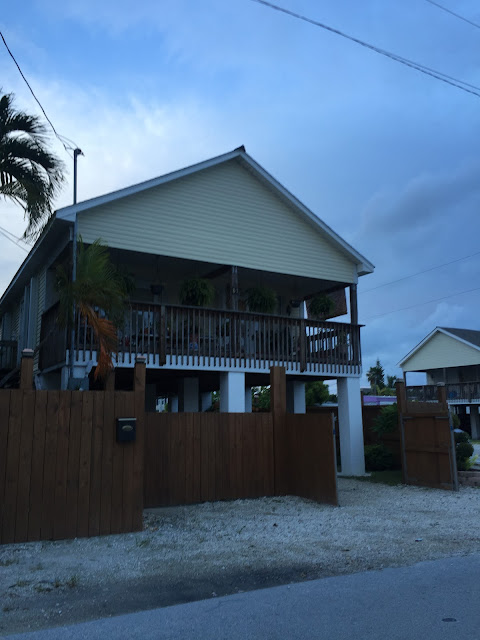 The neighborhood in question is shown in this screen capture: 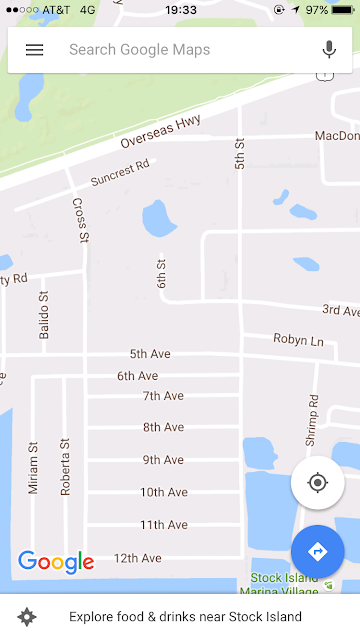 Address that are numerical streets, 1 through 20 are in New Town in Key West. Numbered avenues are on Stock Island. 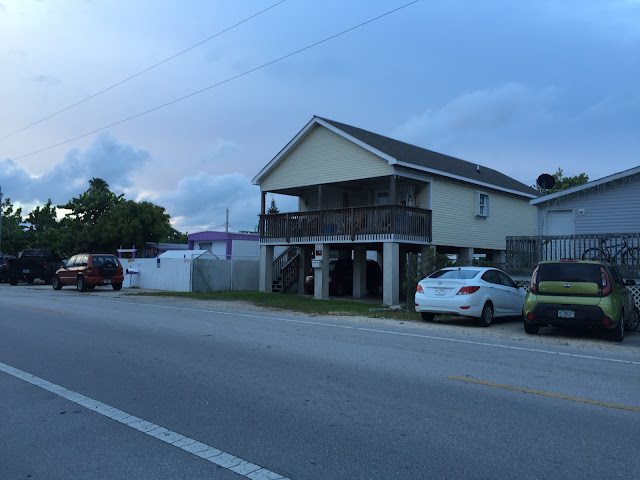 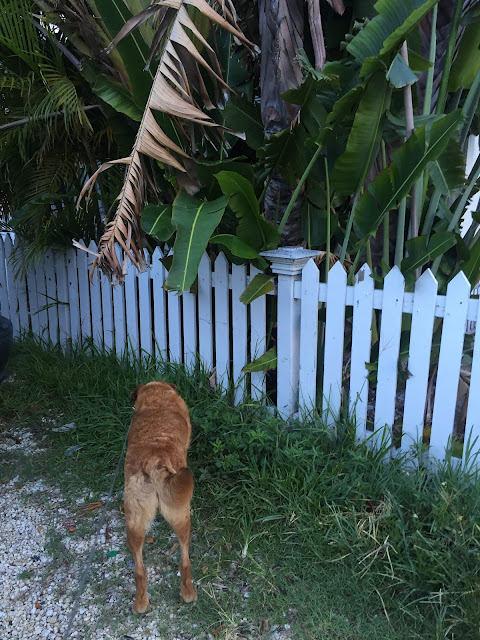 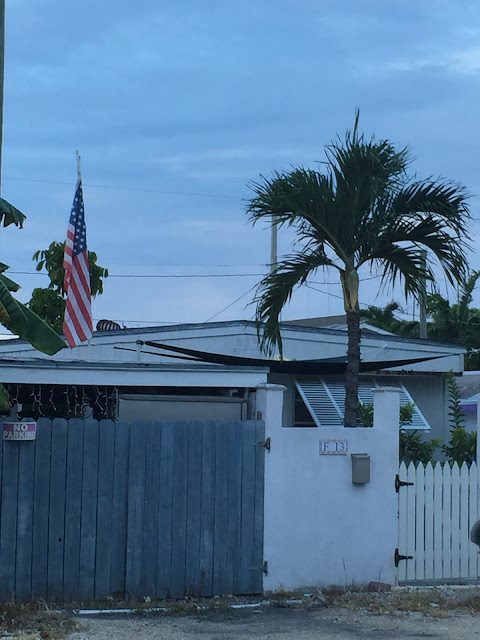 And then we find the picket fence delineating the aerial manufactured home. 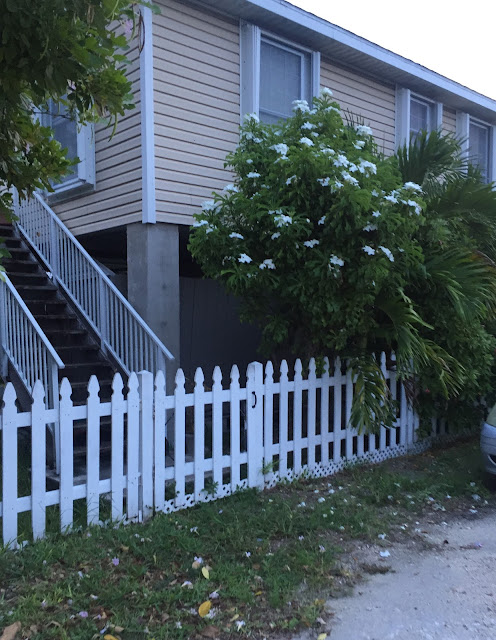 The wing mirror dilemma as shown below. I ask myself why wing mirrors that get knocked about are absolutely impossible to re-rig onto the car. Clearly this owner gave it the old college try to no avail: 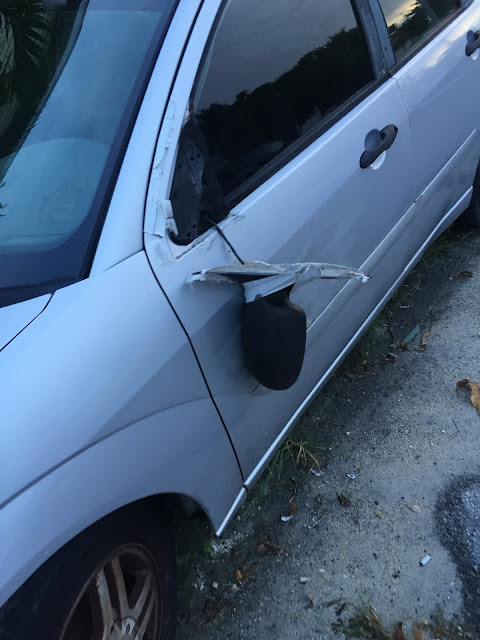 I like wandering the avenues especially early in the morning before the Le Mans style Grand Prix starts up with everyone launching theirs cars into the street for their commute. 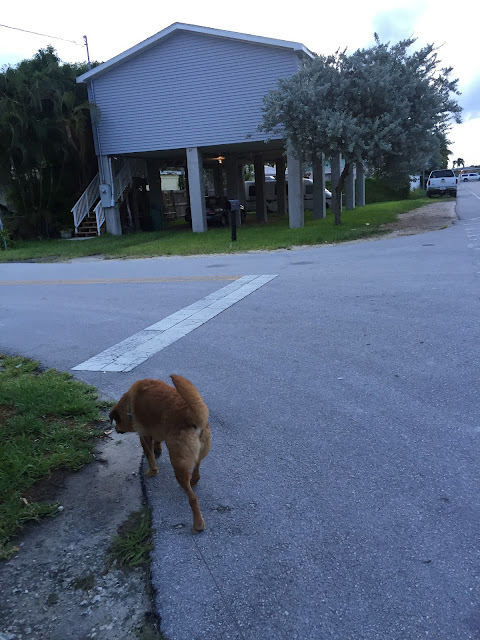 It is a place of eccentricity and personal style, outdoor living and letting it all hang out. It's way too intimate for me. 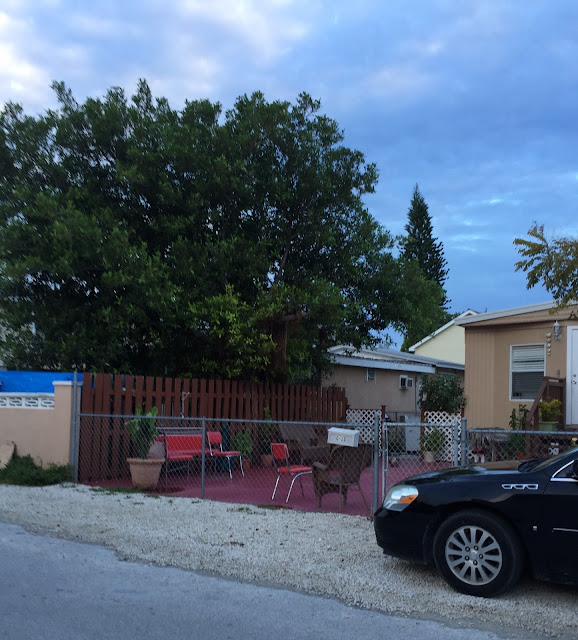 I have a friend who lives here and in the six months since they moved in their dogs found some kids breaking into their back yard over a tall fence. Another friend says her boyfriend won't allow them to live here for fear of what fate worse than death might befall her. 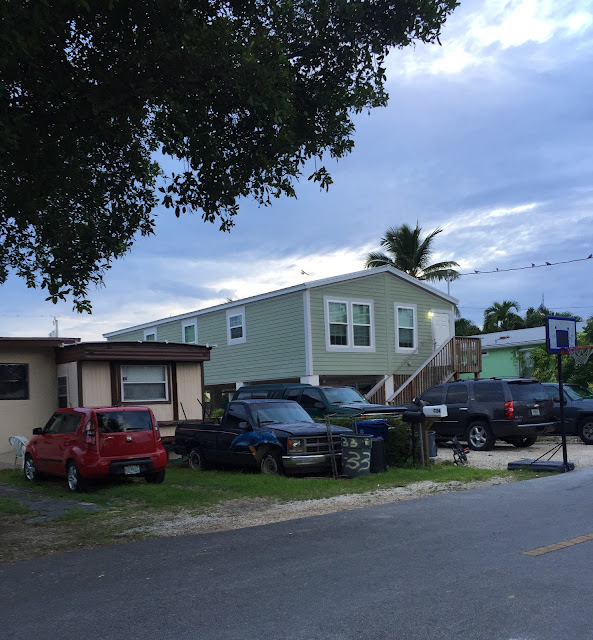 To me it's noisy vibrant diverse and annoying in the Avenues in equal measure. I love walking around here but the idea of living her fills me with dread. 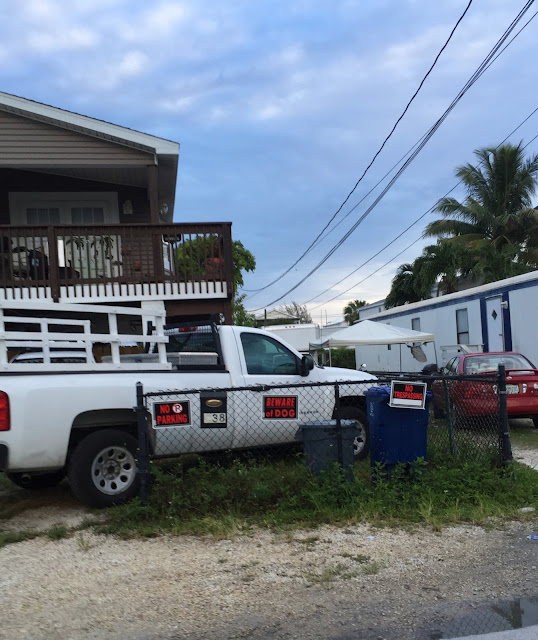 Dogs barking, engines revving, furniture being abandoned, its a real life West Side story or Eastenders played out in Spanish and English Creole and Spanglish. 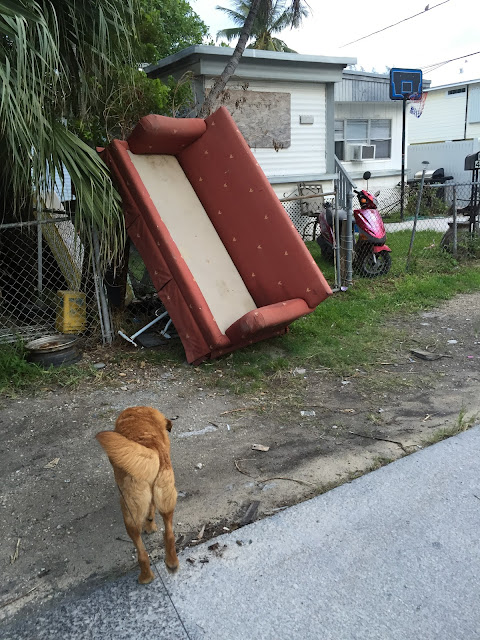 My idea of gardening is hiring a landscaper but I am also a keen transporter to the dump of my outmoded unconsidered trifles. When I see a few too many bits and bobs piling up I start twitching, hitch up the trailer and haul them off to the dump where they relieve me of eleven dollars and I go home feeling it was money well spent. Not everyone shares my enthusiasm for lightening the clutter. 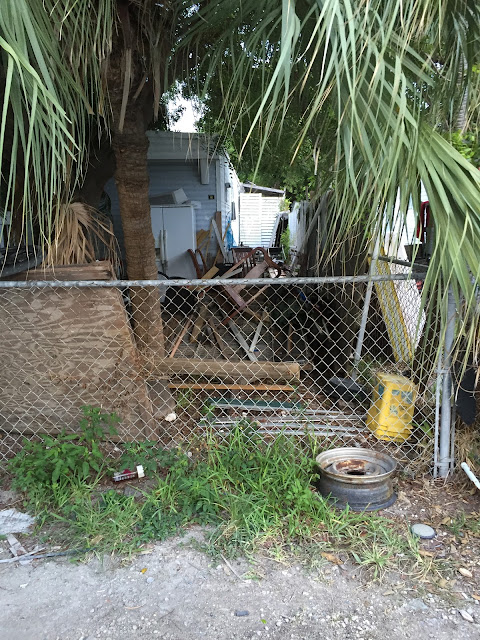 If Rusty were to tell the story he'd point out this is a neighborhood filled with smells. 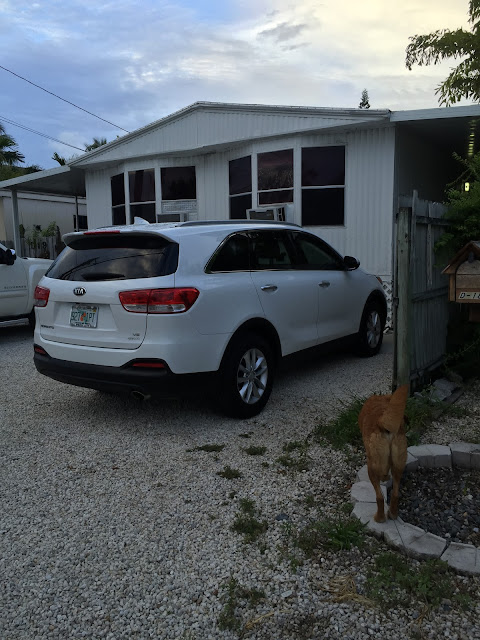 Because I'm human I smell nothing but I see cars everywhere, like used car lots. 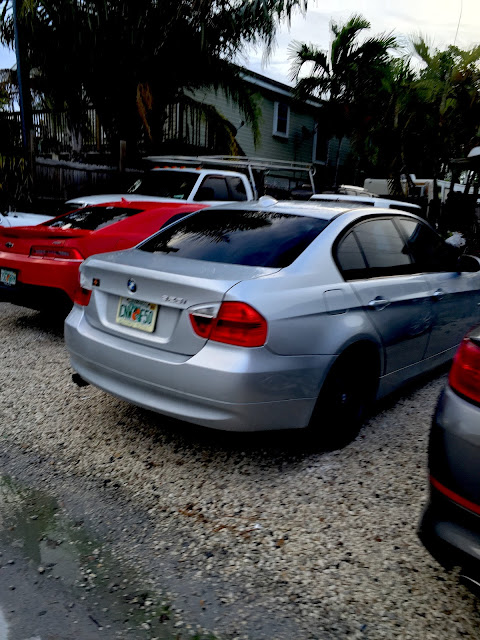 I just don't see how even the most hardcore of developers could buy up all these lots and turn this into something hotel or resort-like. Perhaps its wishful thinking but I hope the chaotic run down avenues will be a thorn in the side of gentrification for years to come. 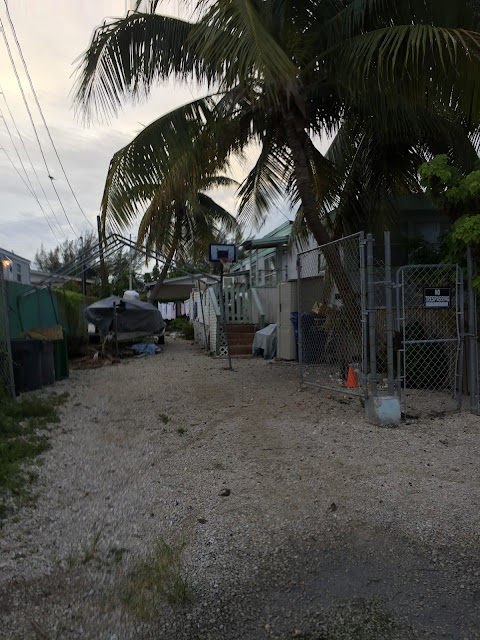 I will continue to walk here from time to time and enjoy the sometimes astonishing view of life as it is lived on Stock Island.
Posted by Conchscooter at 12:00 AM No comments: