A Short Walk Off A Bridge

Yesterday morning was cloudy and muggy and somewhat unpleasant. Granted it was a change from the recent spell of cold breezy sunlit days, but change isn't always for the better. It was clear to me a cold front was on the way, and so it proved to be. 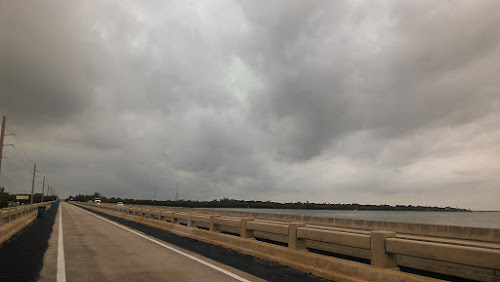 Cheyenne's early afternoon walk, after I got up, was on the bridge connecting Sugarloaf to Cudjoe as I was on my way to pick up our organic vegetables delivered every other Tuesday by Annie's. Cheyenne as usual went nuts chasing fish smells left behind by eager anglers. I read a magazine and admired the views across steel gray, still waters. 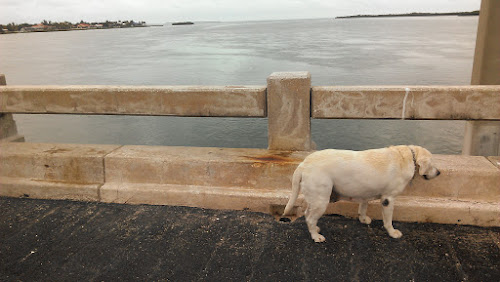 For some reason unknown to me there was a ton of traffic going both directions on Highway One and I wondered if perhaps I had forgotten some event or spectacle going on in town. Other than the James Bond movie at the grossly mismanaged Regal Cinema and the homeless exhibit at the Studios there was nothing going on that I knew or cared much about. Yet people were traveling. 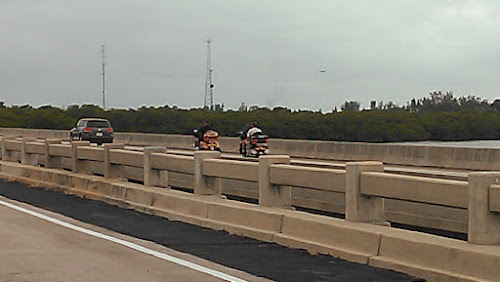 There was no one fishing on the bridge at the start of our walk but half an hour later I could see a couple casting about on the Cudjoe end of the bridge, she cheerful and enthusiastic, he silent and apparently morose, perhaps put off by my pink Crocs. So my happy dog, full of sun baked bait fish ambled by leashed momentarily to prevent her stealing their delicious rank calamari bait. I walked with my eyes averted as I dislike the anglers' habit of leaving their prey to suffocate, flopping hopelessly to death in an empty plastic bucket as impersonal and thoughtless a death as any I could imagine. It takes so little to dispatch a fish quickly and humanely, yet so few fish killers take the time to be merciful. 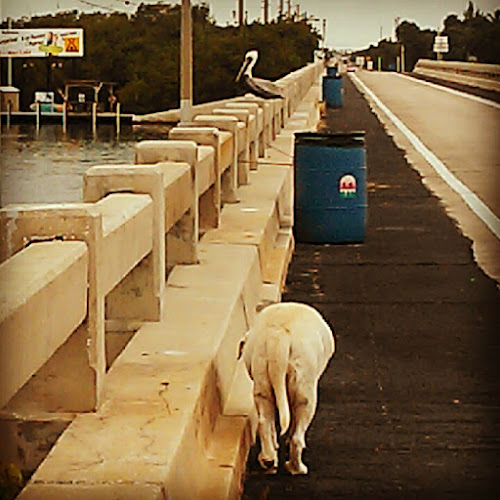 The only other living creature I saw was a pelican sitting and waiting for all I know for Godot, or perhaps wondering why his ship hadn't come in. Cheyenne adhers to her own rigid policy of ignoring wildlife and in this case she stuck to her pursuit of long dead fish and discarded fish scraps on the pavement. The pelican, eschewing conversation with us, the only other living beings on the bridge took off, in that way birds have, of making you wish you had wings and could change your mode of locomotion so easily and swiftly. 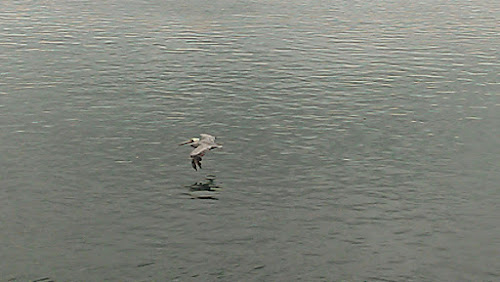 I am one who likes sunshine, and I could live with sunshine every single day and not complain. I like my world to be illuminated in primary colors, shiny green palms, big white puffy clouds, a cerulean sky suits me just fine. All the nonsense people, talk about seasons and brown leaves and trees that look like dead twigs, Nature's winter renewal etc... leaves me cold. Of course I too have to suffer the occasional gray day in the Keys with some weather drama of wind and clouds and rain, which is a refreshment that only goes to prove that daily sunshine is best. Faced with a glowering day like ester day the only thing I could think was that at least it was warmth enough to be in shirtsleeves. 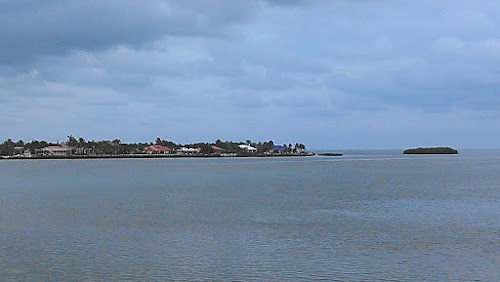 Yet I think I am not alone in preferring sun to heavy cloud cover, at least in these seaside communities where people come to swim and play and be outdoors. I checked the artificial little beach at the Sugarloaf KOA campground and there was not a soul to be seen. Not even a pelican in residence on the beach. 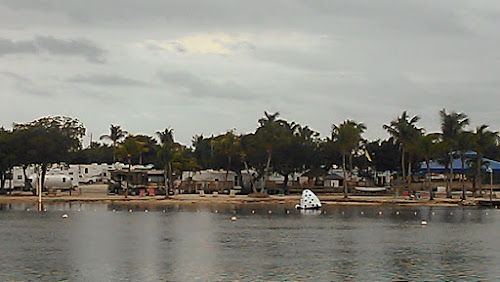 We made off the end of the bridge Cheyenne and I onto Sugaloaf across the Highway from Mangrove Mama's restaurant. Cheyenne checked the gumbo limbo trees and sniffed the grass, a spot where thick grass ears to grow naturally, an unlikely occurrence on limestone rocks like these and I hoped for a pause where I could read and watch the world go by. She was having none of it. She turned, as resolutely as only Cheyenne knows how and started stumping back toward distant Cudjoe Key. By the time we had made it past the middle aged angling couple, Northerners, no doubt judging by their refusal to acknowledge a fellow human met in passing my Labrador was ready to blend her yellow coat into the limestone rock of the heavily trafficked parking area. 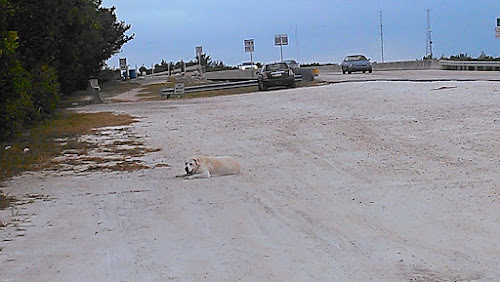 I let her lounge for a while until I got completely bored, the newspaper read and my desire to return home overcame my reluctance to twist Cheyenne's arm, as it were. We stopped to pick up the vegetables delivered from the mainland to Cudjoe Key for us and a few of our neighbors, then it was on to home and an afternoon of movies ad exercise and some plant watering in an effort to encourage rain. 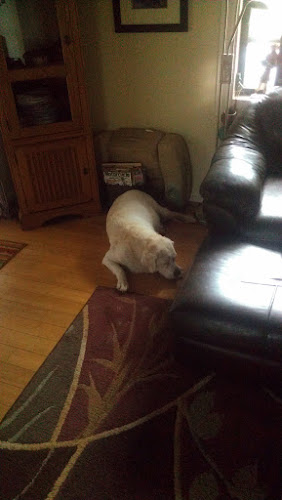 As darkness descended last night the rain came on as expected. I stood on the porch and listened to the raindrops bouncing off the palm fronds and a smell of rotting tropical vegetation filled the air as the rain moistened up the ground. The trees shook as the breeze rustled the wetted leaves and I stood and wondered what it would feel like to be standing on a porch watching snow fallen fall, as he season requires. Nothing good came of those thoughts so I hitched my shorts and went indoors to listen to the air conditioner rumble as it sucked the warm damp air out of the house. A good night to read a book on the couch and pretend it was snowing. Pretence is as close as I want to get.

Posted with Blogsy
Posted by Conchscooter at 3:00 PM 1 comment:

It happened that I was looking at the map planning a day trip north of St Augustine and I wanted to avoid the freeway for the journey north, so I eyeballed the state highway that skips along the beach throughout Florida's east coast. It's called A1A and it is not generally a fast drive as it meanders along barrier islands connecting coastal subdivisions and clusters of condos that typically fester along Florida's mainland waterfronts. Then I saw a little dotted line connecting the highway arose the St Johns's river. Aha! A ferry...that's always interesting. The route was thus enshrined in my Thanksgiving Day excursion. 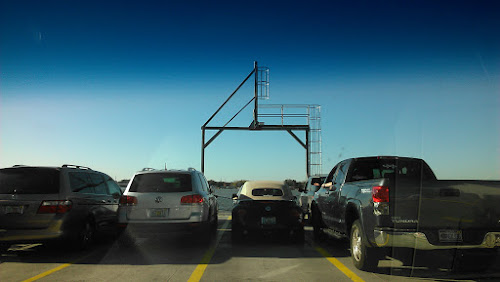 The St Johns's river ferry in Mayport faces extinction if the city subsidy of $200,000 matched by a similar amount from the state were to expire the private corporation running the service says it will close which would not be good for the residents as there is no other way across the river if they don't pay the six dollar vehicle fee to ride the boat. It's a nice boat too, leaving the southern shore at the top and bottom of the hour for the five minute ride, the loading up on the northern shore and returning across the river at fifteen and forty five. Every hour every day from early morning to early evening the ferry runs with room for a couple of dozen cars or more. My wife wanted to take the coast road back even though it was after dark, and she was right because it was very lovely as we waited for the ferry to come back to the north shore of the St John's river. 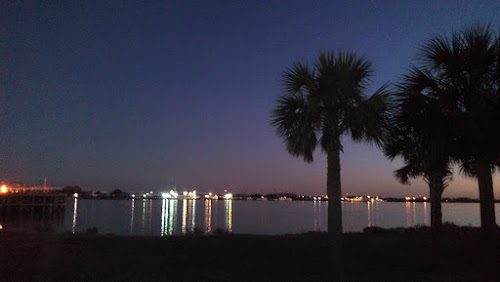 We were the front car in the line to board and as there was nothing much to see and it was cold out, below sixty degrees with a breeze, we sat in the car on the front of the ferry... 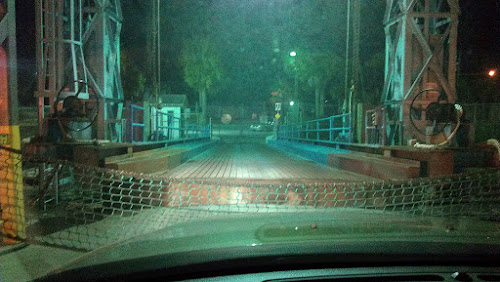 ...and these two dudes strolled up the rail and started chatting. At first I thought they were deckhands but as I listened, and they weren't whispering so I couldn't help but listen, I understood they were passengers. 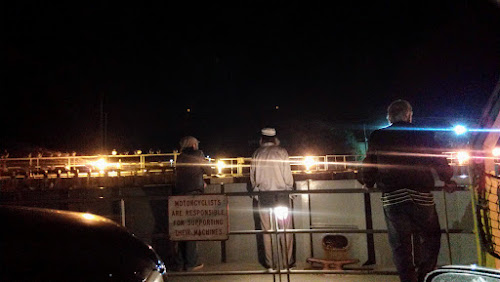 "I counted thirty five pelicans," Guy Number One in the knitted cap said to Guy Number Two in the other knitted cap. He was looking at the pelicans roosting on the sea wall next to the ferry landing. "I haben't been over to the other side to count them," he added.

"I'm surprised they stay around with that guy being all animated and such" said Guy Number One. 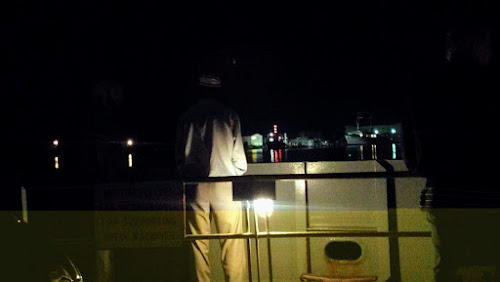 "Yeah," Guy Number Two said, and I knew immediately who was the subject of that remark. At first we thought it was some by-product of working Thanksgiving Day, but apparently the deckhand is always as animated as we saw him. He directed traffic onto the boat at one end and rode over the river proceeding to then direct traffic off the boat. He danced, waved his arms, twirled, hopped and cackled loudly while directing the drivers. 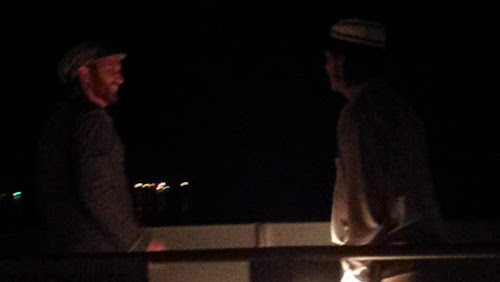 "He's been like that ever since I can remember," Number One said, "ever since I rode the ferry as a kid," which means a long time as he looked to be in his late thirties the guy on the left in the photo above. Apparently the deck hand is quite the character amongst locals. "Never have talked to him," Number atwo replied. Then Number Aone changed the subject. "I saw a dolphin out here," he remarked looking over the side into the black waters. "I wonder if they sleep" he pondered as Guy Number Two hunched his back against the cold breeze. "I wonder how they sleep" Guy Number Aone went on, musing as if to himself. There was no answer because by now the ferry had arrived and nudged up to the dock on the Mayport side of the river. The animated deckhand, subject of the conversation, danced I to view to remove the netting blocking the nose of the ferry. 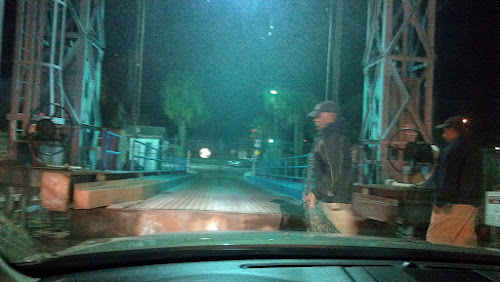 He spun the wheel behind him in the photo below which lowered the ramp onto the deck of the boat to allow the vehicles to get off. He grinned at us as I lurched the car into gear prematurely. You want to kill me on Thanksgiving Day?" he said with a grin. I apologized unable to explain I was anxious about being ready to lead the parade off the boat. On our trip north I had been at the back of the line which position I preferred. 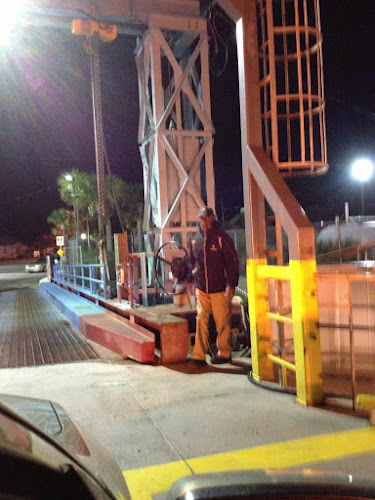 We drove off finally and as unlikely as we are to go this way again I was glad I had overheard that snippet of conversation about the boat and the crew member startling in his open hearted innocence and a local's musing as we made our way by that imperiled ferry connection across the water.