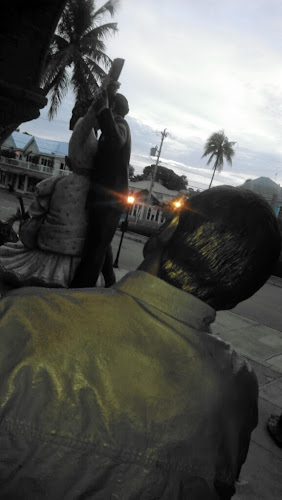 You might think the Customs House is an oddity of its own in Key West. In the 19th Century it was standard issue Federal design for Customs House, US, for the use of. The fact that it was built of brick, heavy to import to Key West, that the pitch of its roof was designed to shed snow, had nothing to do with it. Canada, Mexico or Cuba, Federal trade revenues were collected in the same style of building. 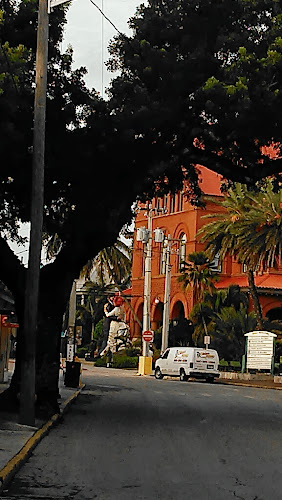 Now whether or not the bizarre orange folly is improved by Johnson's sculptures is for ypu to decide. You can't miss the embrace at the front, engaged in by a couple slightly larger than life size. The figure to the right is an unremarkable image of a youthful fishing Hemingway while the one in the middle is my dog. 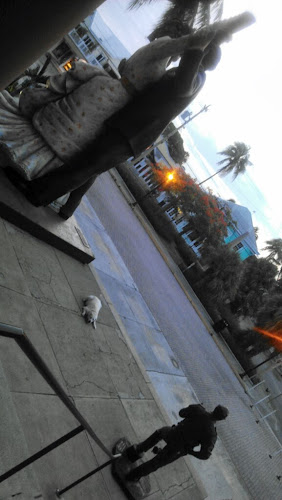 There's the cruise ship in the background and here's the sad tearful farewell in the foreground. One is real, the other isn't. 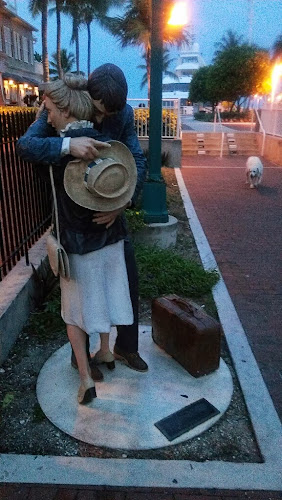 This guy, in expensive foul weather gear carrying a coil of rope and dragging a sail bag is called "Wharf Rat" a very decorous and proper New England style of sailor. A Key West wharf rat has salty spiky hair, a dazed look in his eye from the weight of his hangover and an a lean leathery tanned body clad only in ragged shorts and weathered flip flops. 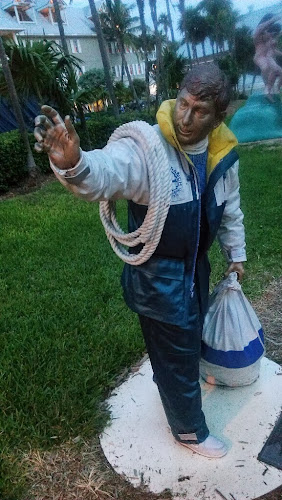 Johnson has his own sense of humor, and he exhibits it from time to time in his titles. This next is "Copyright Violator" which you might suppose is a title he might apply to himself. He specializes in making three dimensional representations of famous works of Art while adding his own impish details. 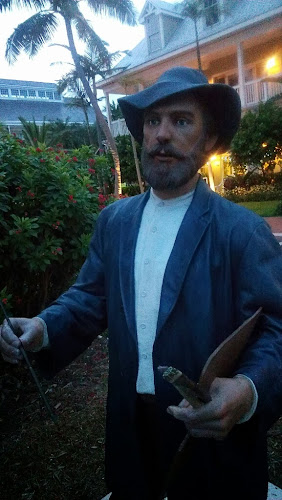 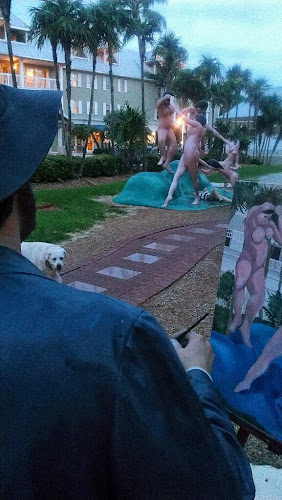 For corn fed cruise ship visitors this kind of scene has got to confirm, upon their arrival in "exotic Key West" that this town is different. In a country where a few years ago the US Attorney General ordered classical statues covered up as their aesthetic offended his private prudery, it has to come as a shock to be greeted by nekkid wimmins cavorting around a happy lad. I'd have been smiling too had this happened to me at that age, but there we are. Parents cover your children's eyes as you stream off the Disney Magic. 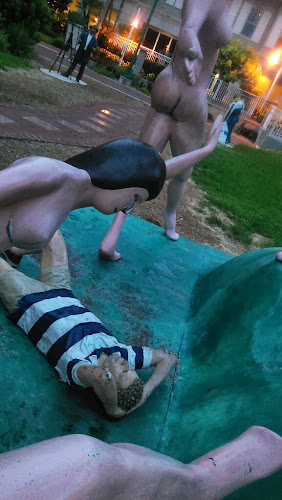 Seward Johnson was born into the tycoon family that sells you baby powder so I'm not completely sure he has much of a clue how the rest of us live. I sort of doubt he worries about getting fired, losing his home or figuring how to pay for a new transmission. His "Lunch Break" sculpture seems to reflect a bygone era, a time when Americans built things and worked in a time when wives stayed home and filled thermos flasks and lunch boxes for their men to take to the mines or factories or railroad. A modern cubicle lunch break never looked like this. 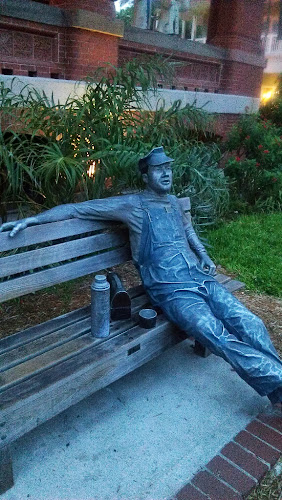 Nor did most break room views look like this: 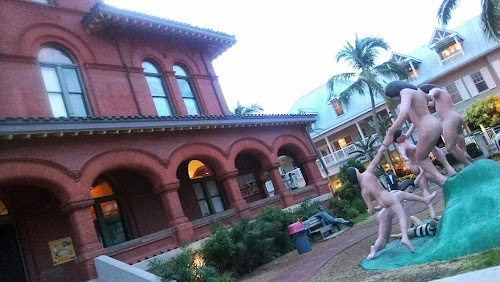 If you explore his website you may be surprised not only how far flung his works are, but also how Seward Johnson and his work are always out front and in the public eye. Statues that look unique to Key West may not necessarily be precisely that. But they do look like they belong. 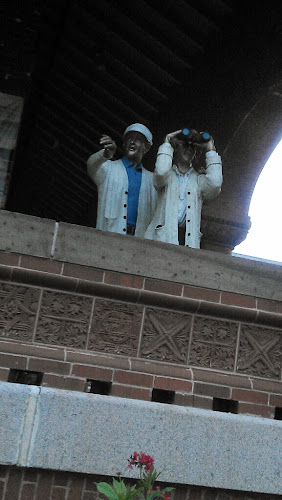 He first came to local attention when some of his life sized statues started crowding the southernmost point and that raised some local hackles (including mine, I must admit). Southernmost point | Flickr - Photo Sharing! from javajem's website in 2007. They've now put the simpering family above the entrance to the airport for people walking off their planes to enjoy. 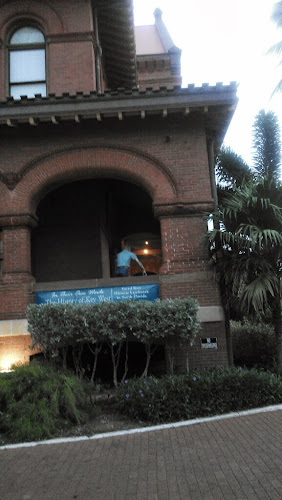 The Customs House has the proper title of Art and History Museum and I like it very much. I go there frequently to enjoy the ambiance of wooden floors and quiet reflection in the high cielinged rooms. I can check up on the real history of Hemingway in Key West, the works of Mario Sanchez and I can also remember the Maine. 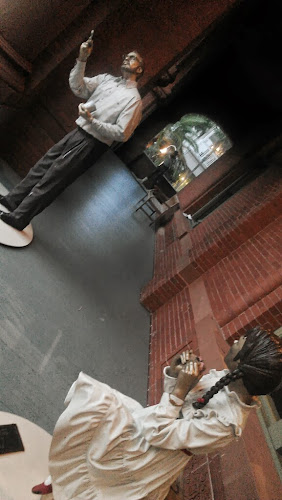 That I have to dodge the "Weekend Painter" and little Miss "Yum Yum" always eating her sandwich is no problem when I want to visit the Customs House. 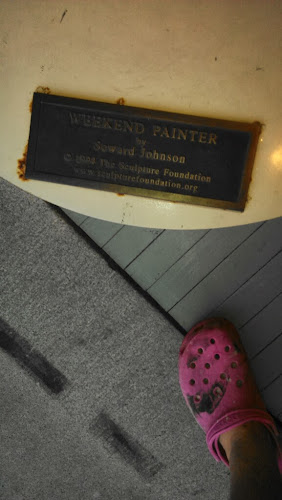 Reflecting on all this statuary and then photographing them takes time and my dog got bored. Time to go, she said by standing up. 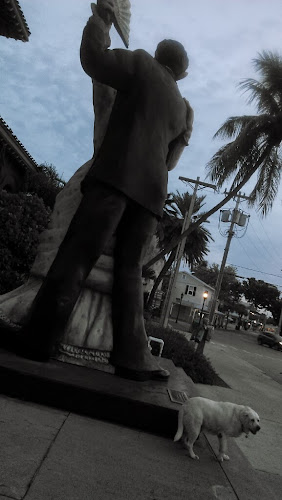 One last picture I pleaded, "Holding Out" an elderly shopper not driving but walking. 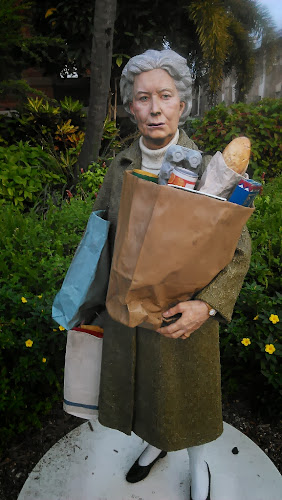 Yup, no hardship at all to enjoy these eccentric pieces of public art. It was about time I stopped to take a proper look at them and if you decide you ever want to they will be there, stuck in time, glued to the ground, and according to their owners they are to make us think. Hmm!

Posted with Blogsy
Posted by Conchscooter at 2:07 PM 7 comments: