When people ask where they can find Key Deer, the locally produced small white tailed deer now native to the Lower Keys, I send them to No Name Key. And here they are: 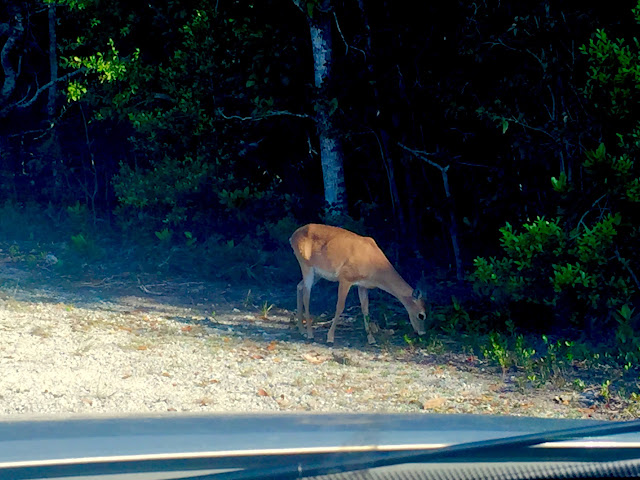 They caused a  bit of a road block  as cars stopped to enjoy the view. 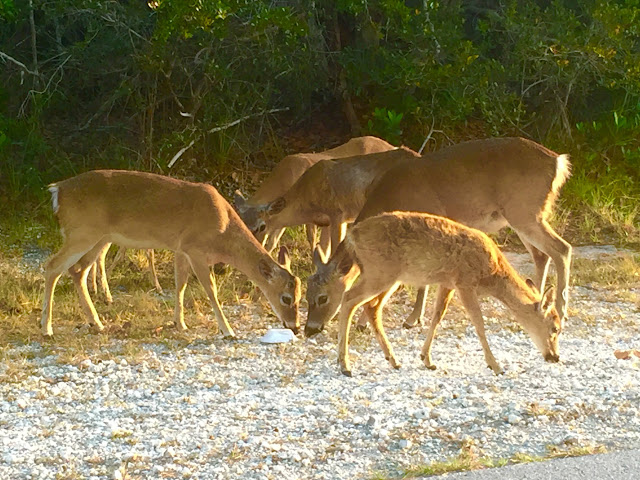 Let's face it: watching deer, even small ones, graze is a bit like watching paint dry but one feels a certain obligation to stop and stare so I did and here are my pictures: 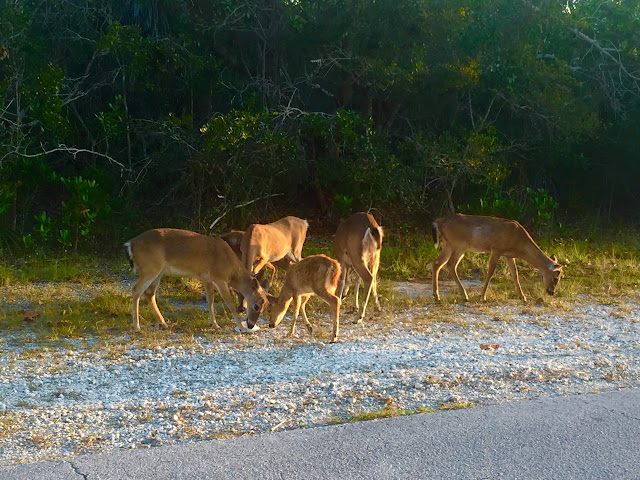 You aren't supposed to feed them or molest  them or run them over with your car. The Key Deer refuge people keep score and you will see notices about how many they have found dead. Occasionally people decide to shoot them and even eat them but for the most part they are essentially outdoor pets. 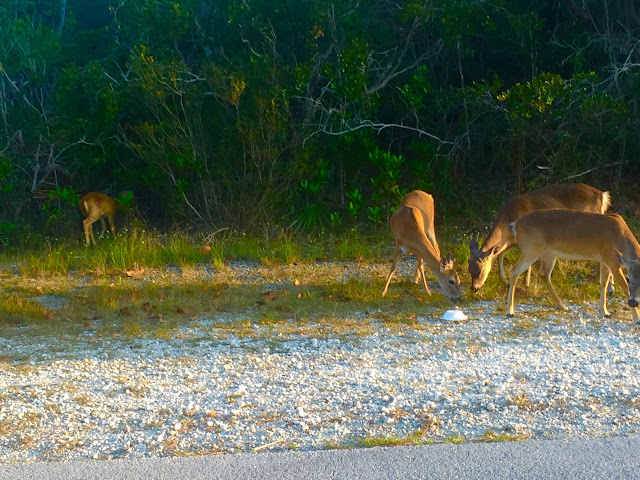 People whose gardens they wreck tend to dislike them and refer to them disparagingly as stunted white tailed deer and they were nearly wiped out sixty years ago but thanks to endangered status and the institution of a refuge they are now doing quite well and some can be seen even on Cudjoe Key occasionally. They can swim and they do sometimes to establish themselves on islands away from Big Pine Key. 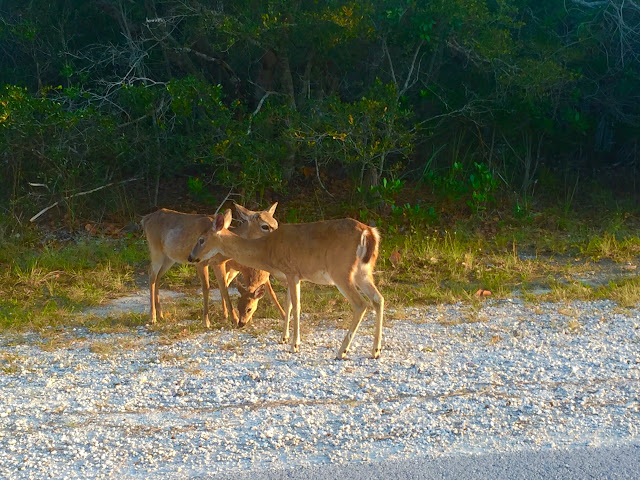 The best story I've read of how Jack Watson saved the Key Deer I have linked here. Much funnier a story than you might expect: LINK 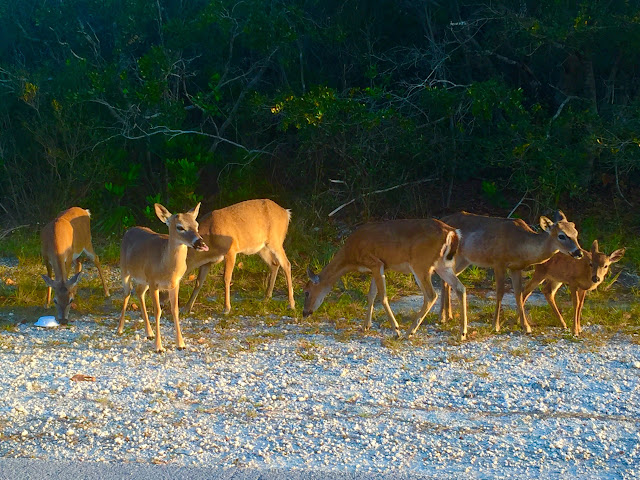 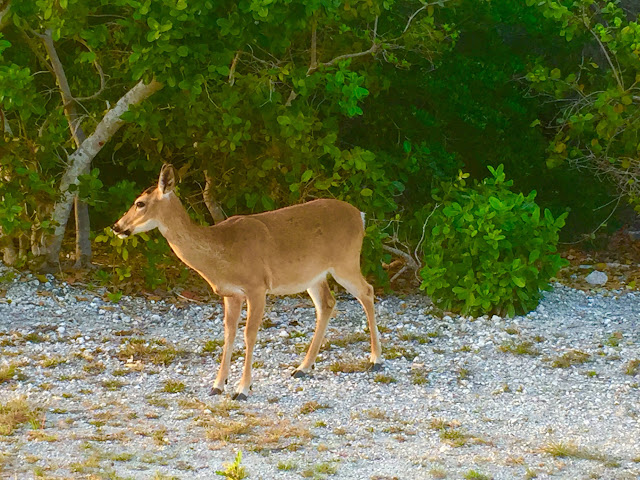 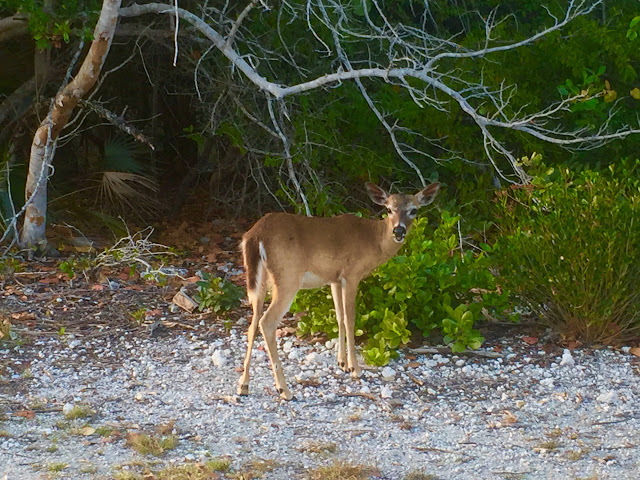 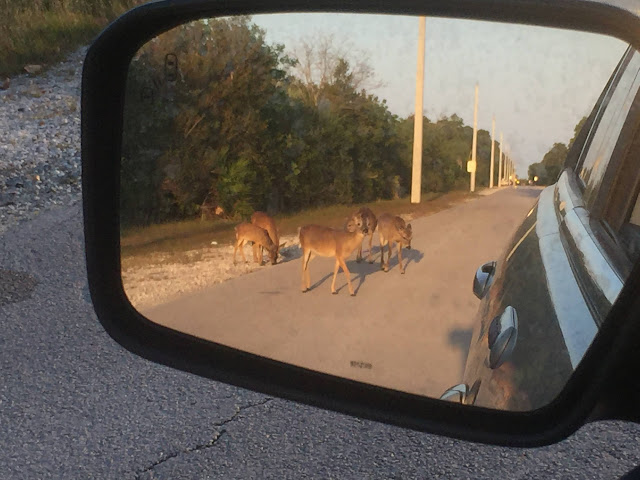 Crossing the bridge back to Big Pine Key under a blazing evening sun. The bridge leads to No Name Pub a place to drink beer, eat pizza and reflect on Key Deer if you feel so inclined. 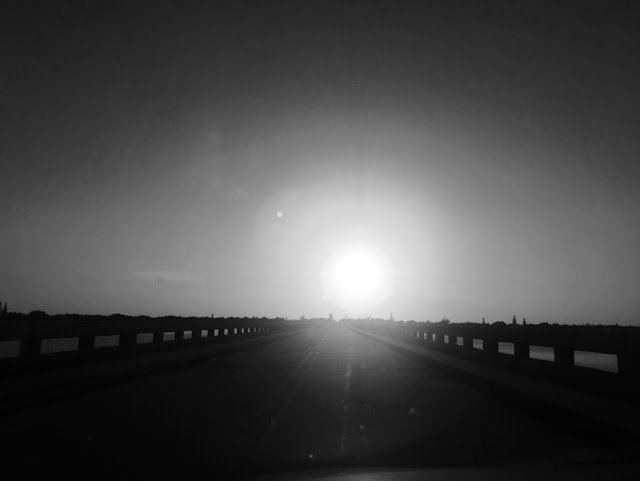 Posted by Conchscooter at 2:00 AM 4 comments:

From The Intercept the political investigative magazine always worth reading this article by David Dayen who looks at the campaign of the chair of the Democratic National Committee who happens to be based in South Florida and whose Congressional campaign is coming under fire. She faces a particularly tough opponent and for that I am glad as Wasserman Schultz has been guilty of anti-Sanders dirty tricks this year worthy of a Republican campaign. 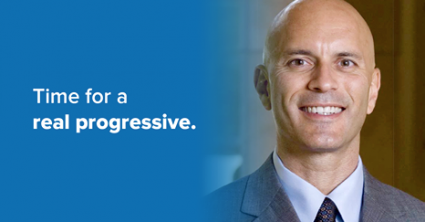 Debbie Wasserman Schultz, the incumbent
PRESIDENT OBAMA on Monday endorsed Debbie Wasserman Schultz, his handpicked Democratic National Committee chair, in her congressional race. What’s stunning about that is that Obama felt the need to endorse a six-term congresswoman running in a heavily Democratic district at all.
Tim Canova, a law professor and Federal Reserve expert, jumped into the Democratic primary in January, challenging Wasserman Schultz from the left. At that time, my Intercept colleague Glenn Greenwald interviewed Canova, revealing multiple contrasts between his opposition to bank bailouts, corporate-written free trade agreements, and the Patriot Act and Wasserman Schultz’s support of those policies.
Populist primaries of entrenched incumbents don’t usually get the attention of the White House, because success for the challenger is so remote. Obama very rarely involves himself in House primaries. That he felt the need to endorse Wasserman Schultz suggests that Canova’s message is gaining traction in her district.
The endorsement comes fully five months before the primary — and days before the end-of-the-quarter deadline for Federal Election Commission reporting. While Wasserman Schultz has never needed help solicitingcampaign contributions from wealthy donors, the presidential endorsement has the appearance of a vote of confidence to ensure the continued flow of money.
“Debbie has been a strong, progressive leader in Congress and a hardworking, committed chair of our national party since I proudly nominated her to the role in 2011,” Obama said in his endorsement statement. “She always stands up and fights for what is right for her district while passionately supporting middle-class families.”
But Wasserman Schultz is more than anything a creature of the pro-corporate Democratic Party establishment. She has been accused of using her position as DNC chair to favor Hillary Clinton in the presidential primary, including by scheduling low-profile debates on weekend nights. Her opposition to a medical marijuana initiative in Florida and sponsorshipof a failed internet censorship bill in Congress have angered progressives, as have her ties to corporate money.
More recently, Wasserman Schultz sponsored a bill that would severely hamper the Consumer Financial Protection Bureau’s proposed regulations for payday lenders. The bill would pre-empt the CFPB rule in favor of state laws like Florida’s, an industry-backed model that permits borrowers to take out an average of nine payday loans a year at an interest rate of 278 percent.
Payday lenders have cost Floridians $2.5 billion in fees over the last decade,according to a recent report, which has fallen disproportionately on African-Americans and Latinos. Wasserman Schultz also voted for a bill that would have gutted CFPB rules prohibiting racial discrimination by auto lenders.
Activist groups in Florida have run ads against Wasserman Schultz over her support for payday lenders. Canova has made the payday lending legislation a key talking point of his campaign, noting that Wasserman Schultz has taken over $68,000 in contributions from the industry.
The Florida Democratic Party initially denied Canova access to the party’s voter information file, but after pressure from the state’s progressive caucus, it reversed course, allowing Canova to use the data. The situation was reminiscent of Wasserman Schultz’s DNC temporarily denying voter-file access to Bernie Sanders’s presidential campaign after Sanders staffers improperly accessed Clinton campaign data.
Canova, who recently announced support from the National Nurses United union, reacted to Obama endorsing his opponent on Twitter, saying, “Our grassroots movement is undeterred and this is our best fundraising day yet. Thank you @DWStweets,” referring to Wasserman Schultz’s Twitter handle. David Dayen is a contributor to The Intercept, and also writes for Salon,
the Fiscal Times, the New Republic, and more.
His first book, Chain of Title, about three ordinary Americans who uncover
Wall Street’s foreclosure fraud, will be released in May 2016.