Hunting Cyclists On The Boulevard

It looks good doesn't it? After more than two years of traffic chaos the Boulevard is done. Totally cool. 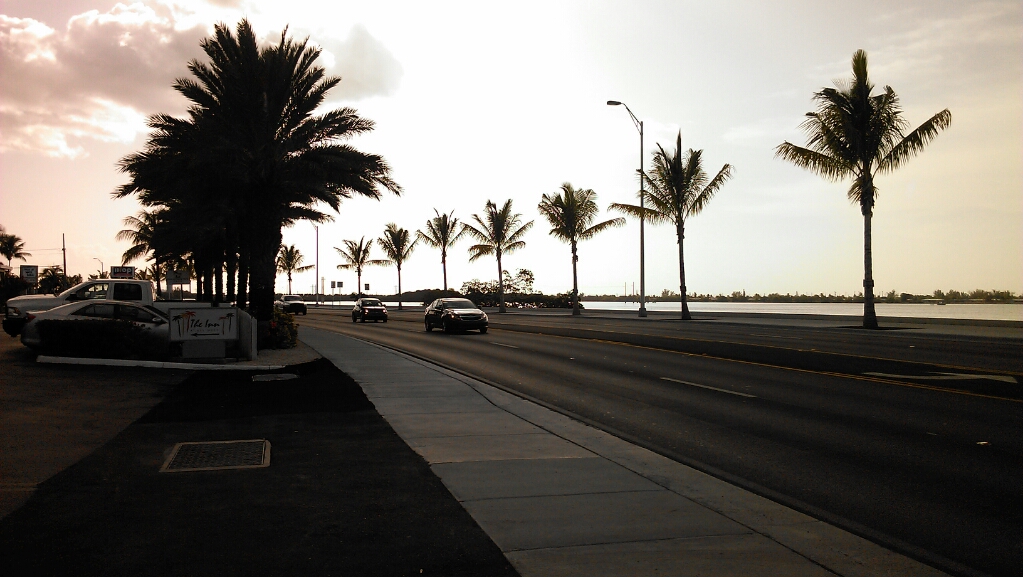 Well, not quite. Not quite done and not quite cool. This right turn lane at the Triangle where one drives onto the island of Key West is still boasting large numbers of orange barrels. One feature of this two mile long reconstruction has been the inertia of the contractor, who walked away for several months and was nowhere to be seen after the job began. The other thing has been the most aggravating of all has been the total destruction of the right of way from one end to the other. Businesses have suffered horribly, traffic has snarled and not one piece of the roadway was completed. Everything was torn up everywhere all the time. You'd think they could have done it a stretch at a  time but not a bit of it. 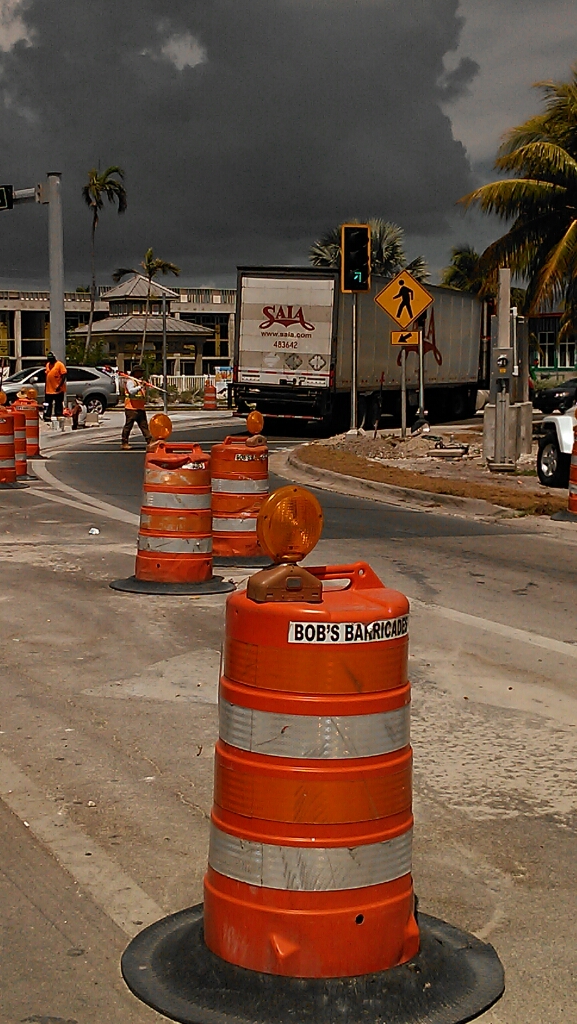 Above we see a good traffic light where the idea used to be "just get on with it" a concept that freaked a lot of drivers out and they would stall, fearful of making a move and thus backing traffic up to Stock Island. Like this: 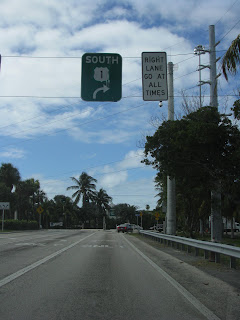 Now the green arrow says "go" in no uncertain terms and only turns red on demand from a crossing pedestrian. Brilliant, yet the mopes pretending to be motorists still stop, pause hesitate and tremble at the thought of merging into their own lane on North Roosevelt. Traffic back ups are still popular for some reason I find inexplicable. This simplicity wasn't good enough: 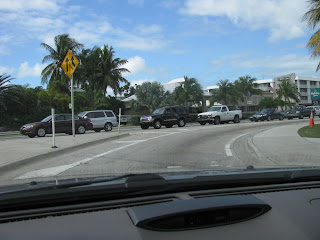 Meanwhile the left turn at the Triangle has become a source of irritation and confusion. The State of Florida says an invisible traffic light is the only way to go because the lights must be perpendicular to traffic. Which is as may be but the lights indicating a left turn here are hidden behind the trees. I'm guessing the trees will be decimated before the state department of transportation will admit they laid an egg. Meanwhile the lame contractors are still busy tearing up the asphalt they recently put down in this area...45 million dollars later... 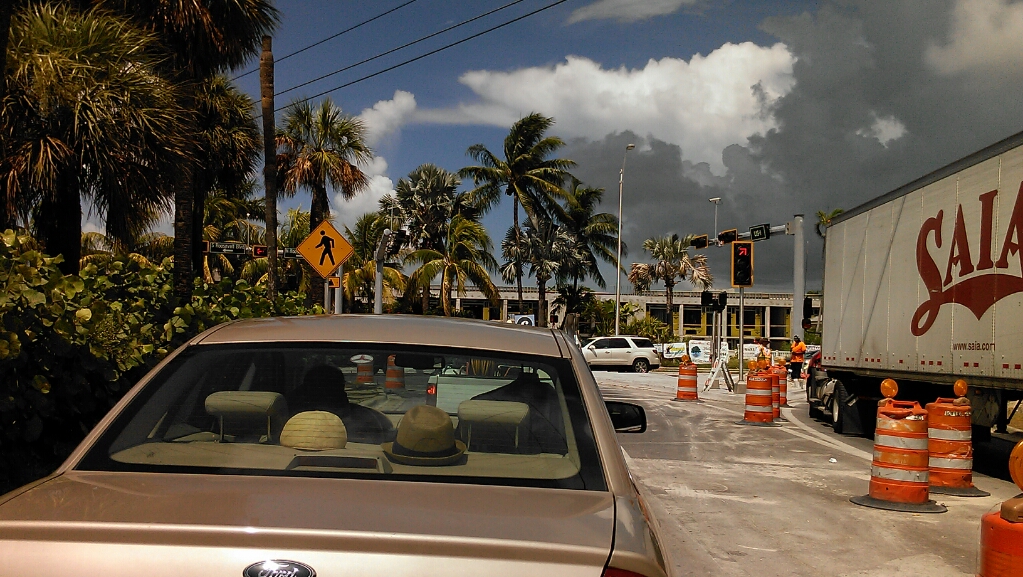 The best part is the notion that cyclists should be encouraged to ride in the traffic lanes on North Roosevelt. 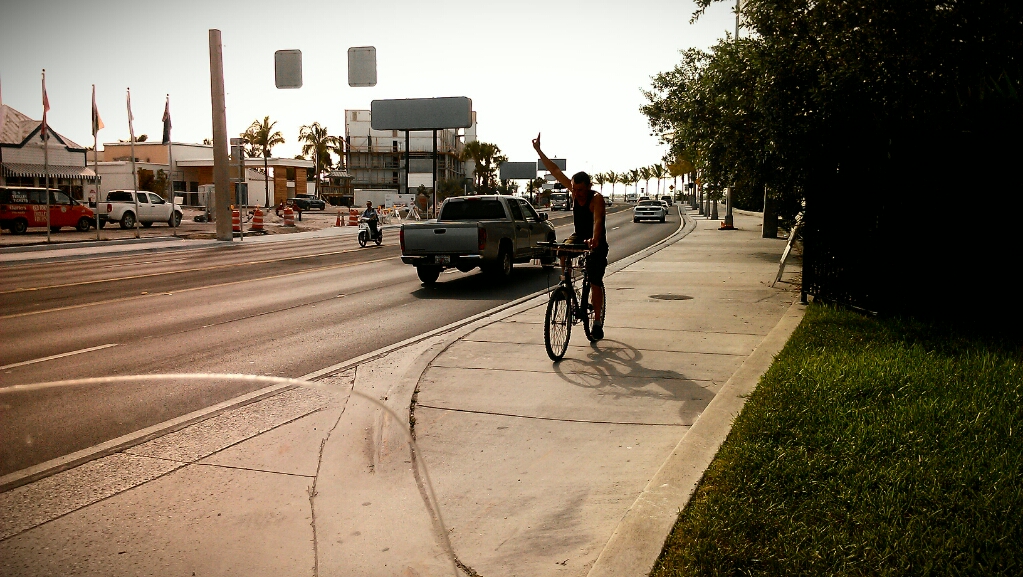 Apparently the newly constructed  cement bike/pedestrian path is inadequate and cyclists are being told they can occupy the entire right lane of North Roosevelt coming and going. Check it out, is this enough sidewalk? 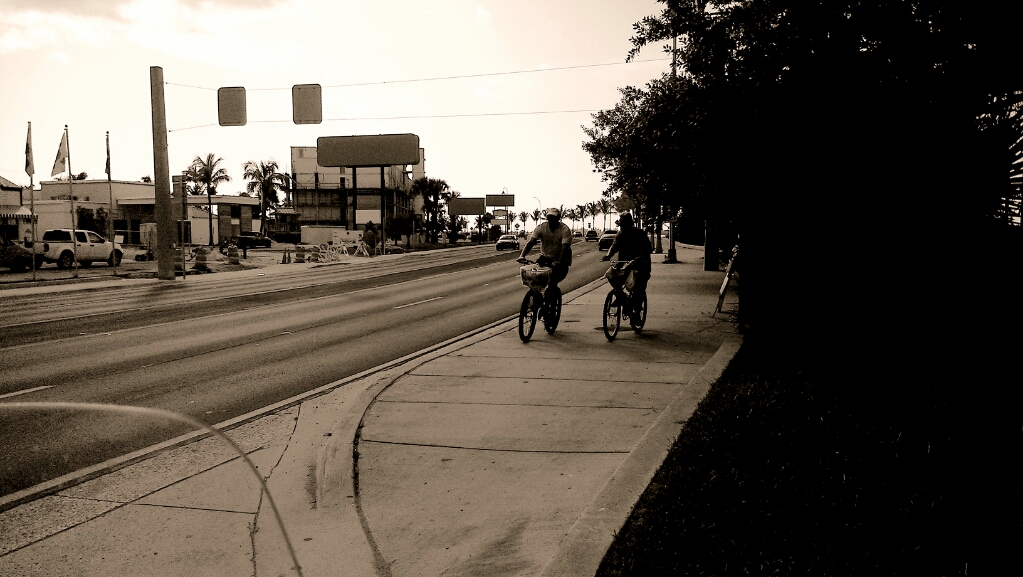 I kid you not, look at this sign. Now I ask you, when I write "cyclist" are you imagining one of those high power spandex covered freaks pedaling smoothly at 25 miles per hour, tight butt in the air, head over the handlebars not giving a toss about anything or anyone else? Well, yes there are a few of those in Key West mostly in winter but I can't remember the last time I saw them pulling that stunt here. When I think of a "cyclist" I imagine more of the type you see here, locals using bikes as station wagons to get where they are going with minimum fuss. There's the third type of cyclist I dread seeing wobble down the Boulevard: happy tourists, people who never ride bikes and are here to have a good time, not to get mown down by traffic where the speed limit is scheduled to go to 35mph. 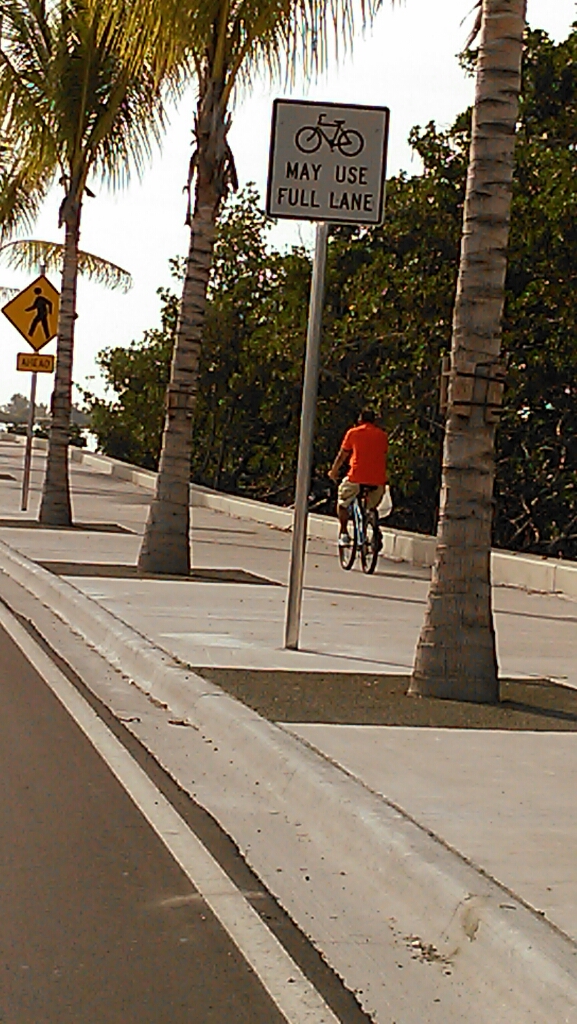 So there they are, the official designations that this is a bike lane. The people who authorized this nonsense must  be mad. 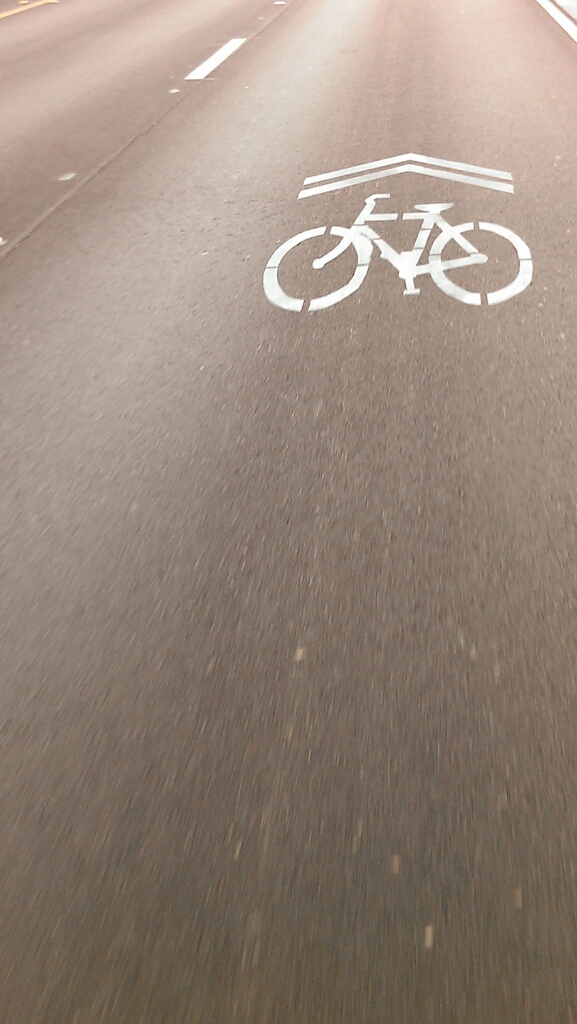 I read in the newspaper that the idea is to slow traffic down, which to me sounds more like a method that might be employed in the Islamic State. Hate cyclists? Make them convert to gasoline power or if they continue in their apostasy, kill 'em all. 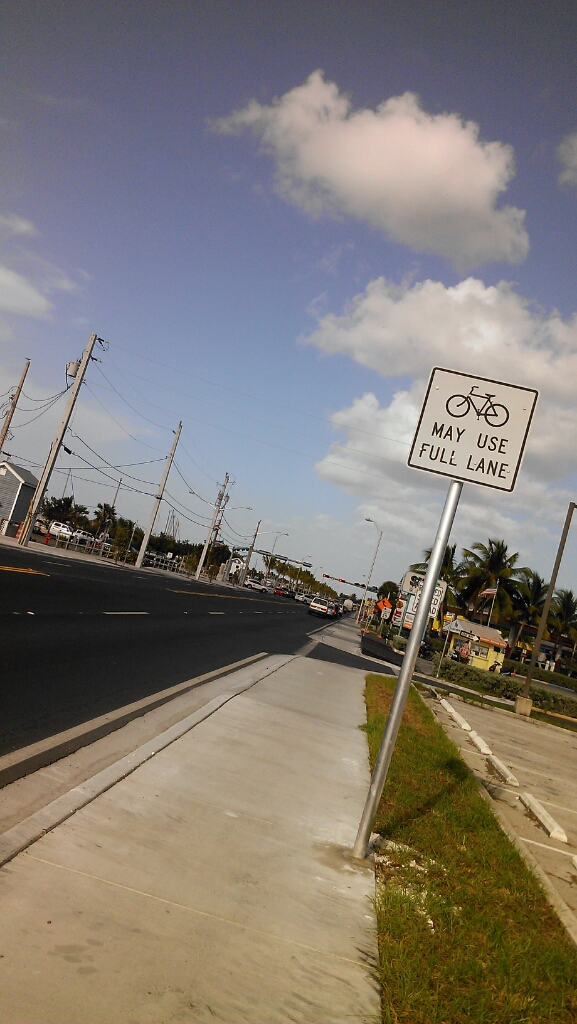 And its not like there isn't room on the sidewalks to ride. Indeed in Florida it is legal to ride on the sidewalk. Cyclists are required to yield to pedestrians and have an "audible means of approach" but other than that there is no reason not ride in safety on the sidewalks. 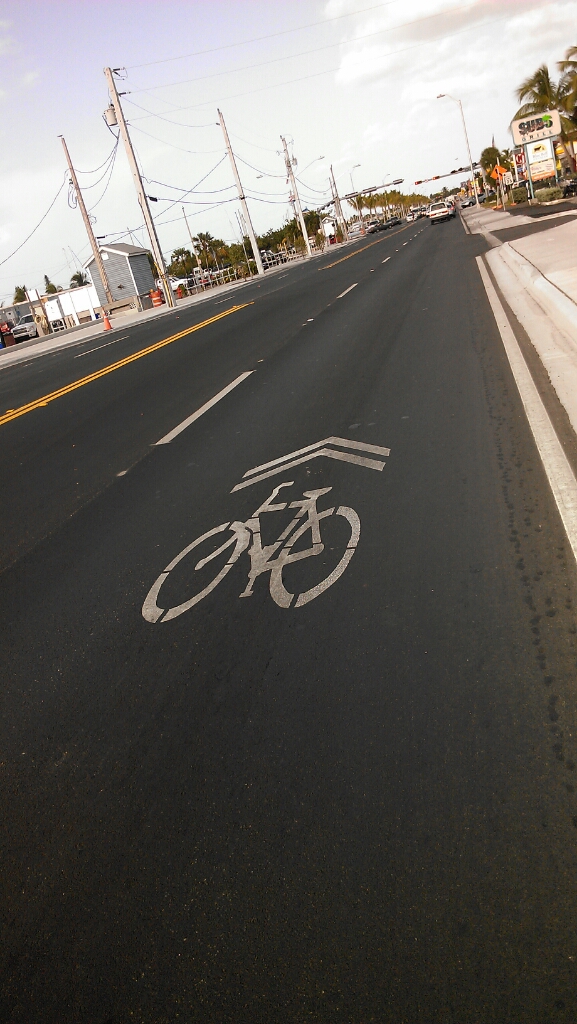 Take another look at the Boulevard, five lanes, two sidewalks, 35mph is barely ever observed but that's where they wants cyclists to ride...to slow the traffic down! 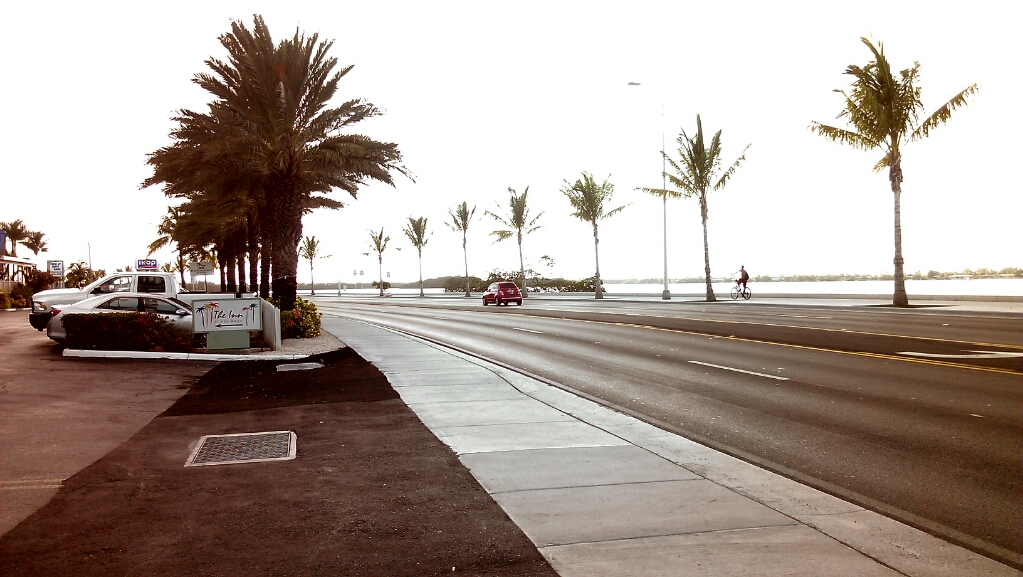 Despite the fact the eminently smart folks at deMoya are nowhere to be seen they've left behind their construction speed limit signs. Why? God knows. 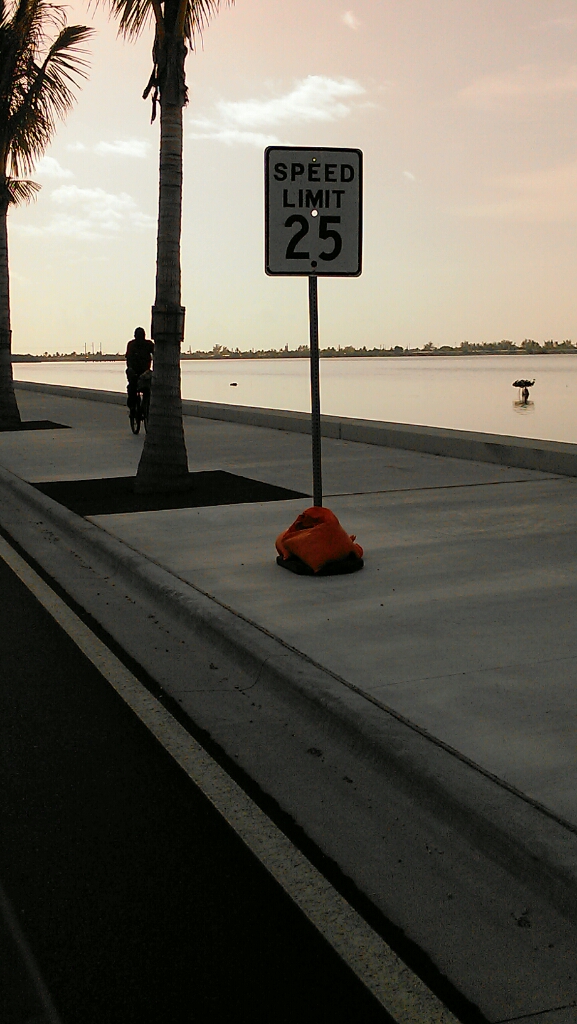 Then there was this little fiasco reported in the newspaper, a stretch of sidewalk where the owner, a free market capitalist has decided not to cooperate with the state and give permission to pave this stretch of sidewalk. You'd think someone at the state DOT might have heard of eminent domain (look it up) but the paper quoted them as shrugging their shoulders and saying there was nothing they could do unless the idiot changes his mind and signs off on the paving. Meanwhile the gravel pit lies in wait...for the unwary. Lawsuit anyone? 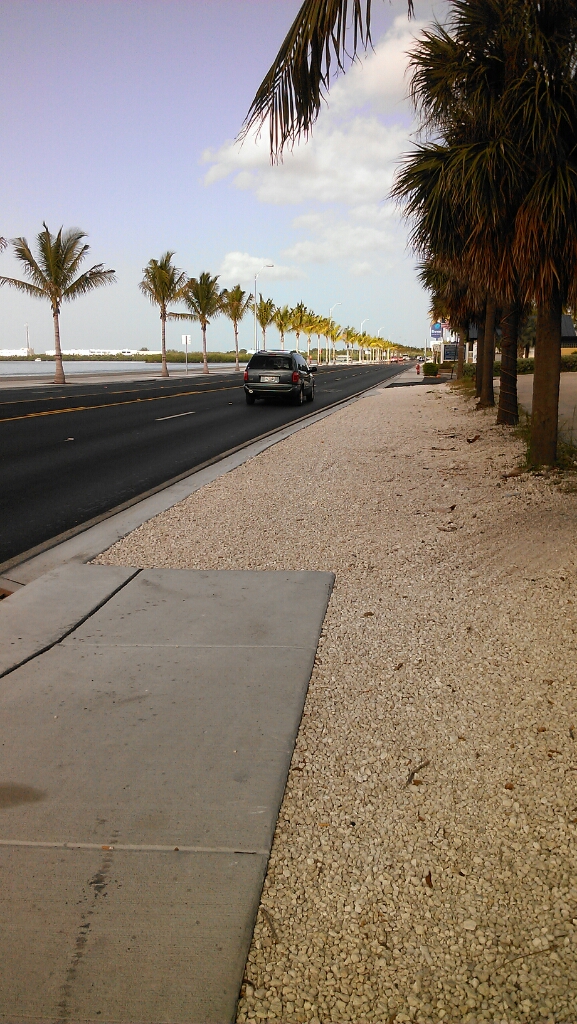 Ah, yes this construction has been a tribulation for everyone and the loss of stores attests to that. The original plan called for flooding impacts to be minimized. Whether the drainage improvements will actually work we shall have to wait and see and if they do work that would be wonderful as the old boulevard flooded after the least rain. 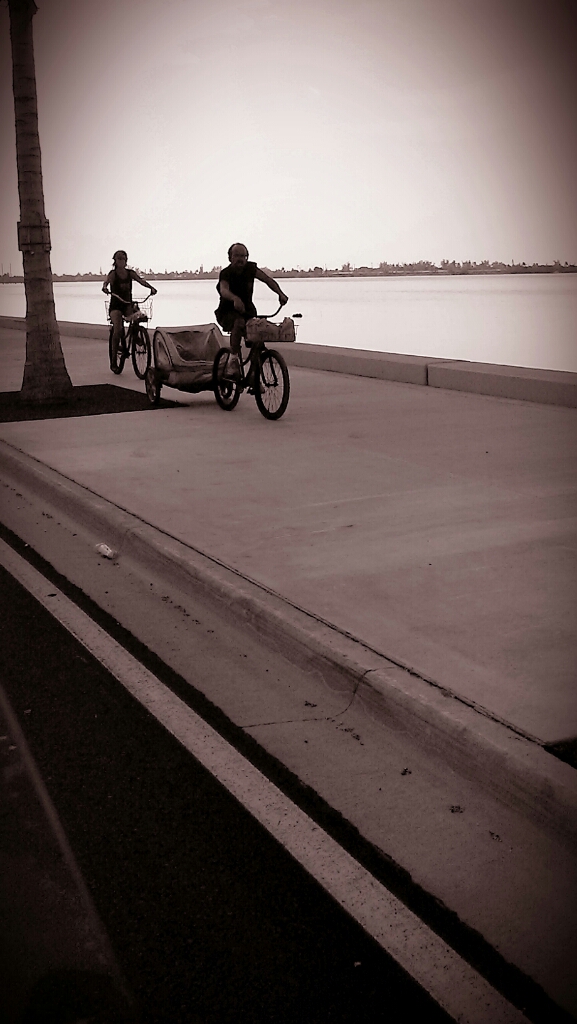 The newspaper in its rather critical essay on the new Boulevard did note a lot of complaints, much to my surprise, at the spelling on the new sign at 5th Street. A few alert readers had noticed the gaffe. It happened a good few decades ago that the British Prime Minister Harold Macmillan, known to his electors as "Super Mac" came to Key West to be entertained by President Kennedy. They took in the sights and all that stuff...
...and the city decided to name a cross street in New Town after the man who had once told the British people "You've never had it so good!" Not a bad election slogan at that. Anyway the name never stuck and most people call it Fifth Street though if you are giving directions to a tourist you have to remember to call it Macmillan as it it's posted that way, actually now its posted as Mac Millan on the Boulevard. Bummer. 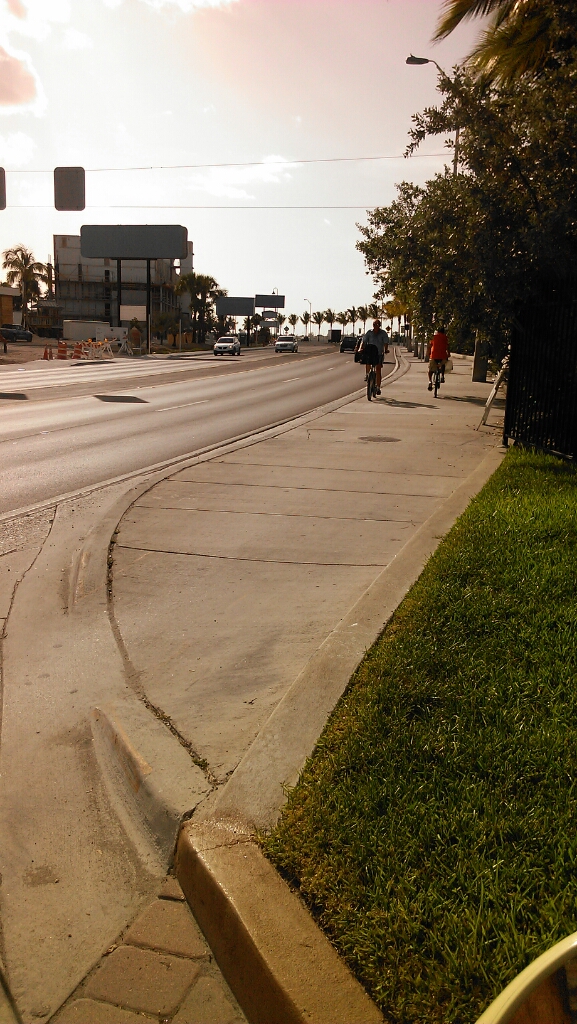 Miss-spellings are everywhere and I like to think its due in part to the amount of words that get written, thanks to the ease of technology, and the ubiquitous spell check function that makes everything written subject to robotic review, but in any event the bicycle thing is even more dangerous than the traffic light thing, and at the price of sparing us some flooding someone is going to get killed this winter, if not sooner by the crazy people at the state DOT. Ain't Florida great?
Posted by Conchscooter at 12:00 AM 6 comments: