I took these pictures a month ago, and as they came just before my vacation. I held them over until now but I remember that strange day quite fondly. It started as so many of mine do with an alarm at 4:25 in the morning followed by a  leap out of bed and a short walk with Rusty to check the mail. I do this before I go to work as Rusty likes to keep up with the urine messages left by neighborhood dogs before he settles down to wait for a proper walk when my wife gets up. 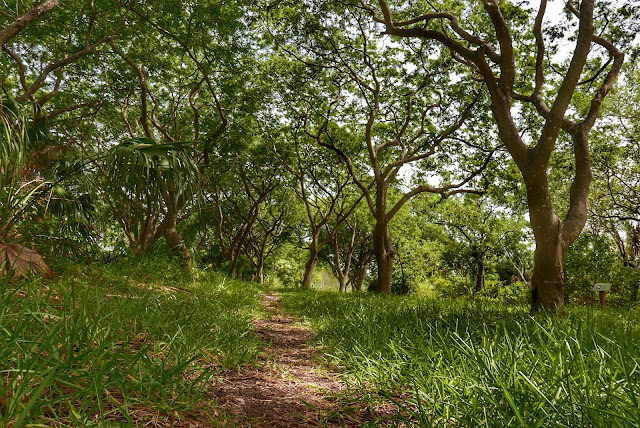 These photos were taken in Miami in early July when I drove the van up for an undercoat job to seal the bottom of the van against corrosion. The voice at Andy's Truck asked me to be there at eight  and expect to wait several hours so I was on the road heading north before five. You get used to this if you live in the Keys and have doctors or mechanics or big shops you want to visit in the city. Some people find it odd that my wife and I routinely drive up, shop and come back in one day but we wouldn't be retiring into a van if driving bothered us. 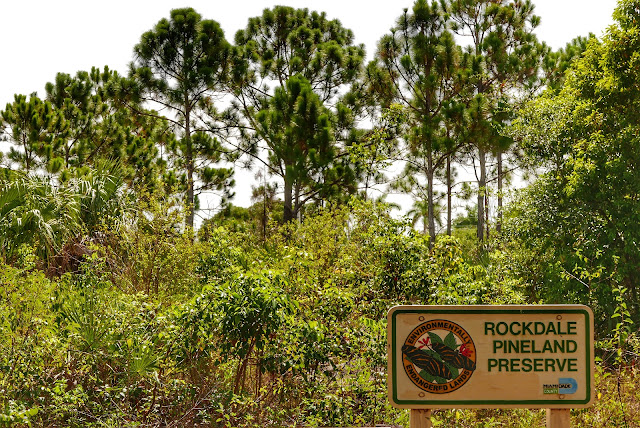 So as I prepared for a morning in South Miami I checked the area behind The Falls shopping mall to look for points of interest. Using Google satellite and street view I spotted a triangular wedge of greenery 22 minutes away on foot from the Undercoat shop. Further investigation found reviews describing a sylvan spot with few visitors, my favorite being "A waste of taxpayers' money!" with no evidence at all that money was being spent on the half mile long park. 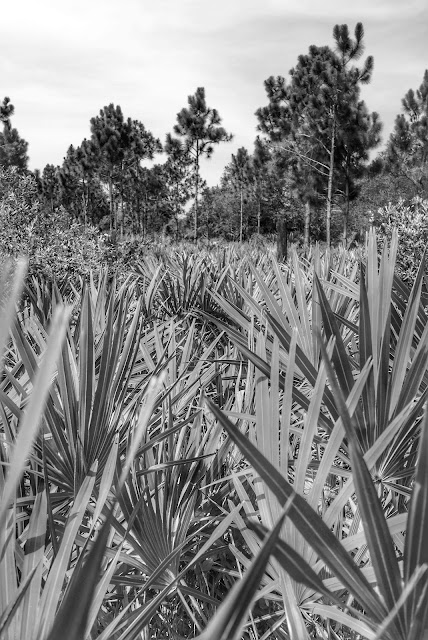 I had chosen to leave Rusty at home as the day was forecast to be blistering hot and there was no point in subjecting him to the life of a homeless man and a stray dog in Miami in summer so I was on my own -come back at one the undercoat shop said cheerfully - with a camera and no obligations at all. I walked to the grocery store, masks required and social distancing enforced, where I got a sandwich and a drink and set off for the scrubby park on the map. 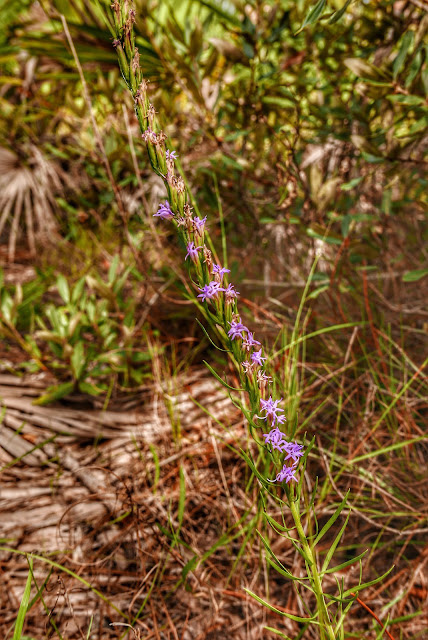 It was hot as you like so I stopped on the way and sat like a street dweller under a tree and had brunch while watching people bicycle, catch the bus and stay well away from each other. People actually in Miami defy all stereotypes about visitors from Miami who come to the Keys. The stories are of aggressive people who dump trash and have all the social graces of  wild cats on catnip. In Miami itself I found people very socially conscious and aware of the need to keep apart. 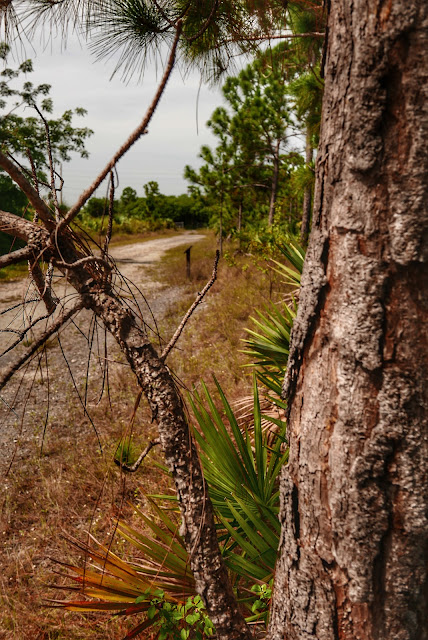 There was no need of that in the inferno that was Rockdale Pineland Preserve....Like I said money is not much in evidence here, it is just a wooded open space with a few signs and a trail down the middle. And many of the signs I saw were quite elderly. 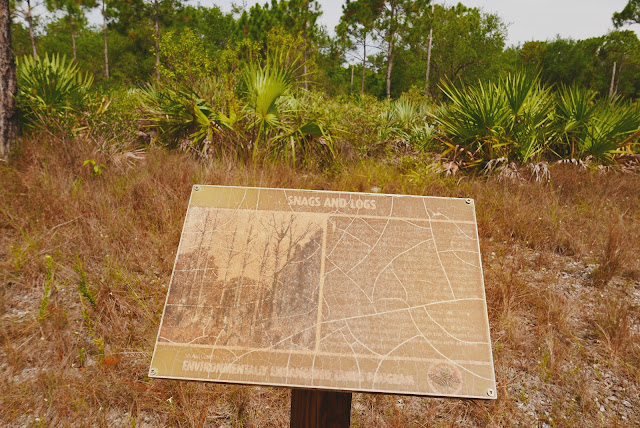 It doesn't look like much  but the 39 acre woodland is part of the ecosystem you find in the Keys and the Bahamas and it is a valuable stopping off point for birds in migration. It's called Rockland because that is what it is. Most of the Florida peninsula is sand or sandy, and I'm going to generalize a bit, but the Keys survive as they are rocks in the ocean which is why they don't have sandy beaches unless the sand is imported. The Bahamas are similar but they have huge undersea deserts of sand that used long ago to be dry until sea levels rose. 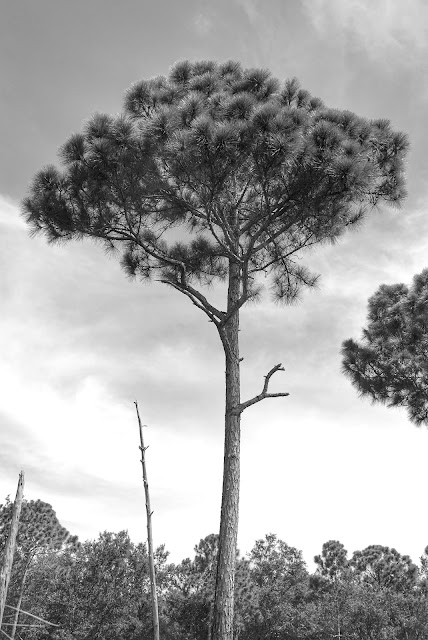 Thus this tiny piece of south Florida woodlands strongly resembles what you will find in the open spaces of the bigger Keys like Big Pine. And there isn't much sand. 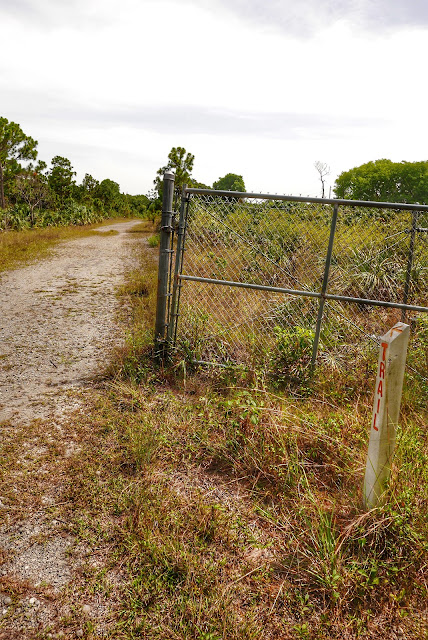 I saw to my consternation dogs aren't allowed which seems a shame.  I did spot this little guy making a life relaxing in the shade. He seemed in good shape and unafraid of me. I noticed a can nearby so I suspect some kind hearted soul is keeping him nourished. I hate seeing animals abandoned, but sometimes people can be the worst thing to happen to helpless animals. 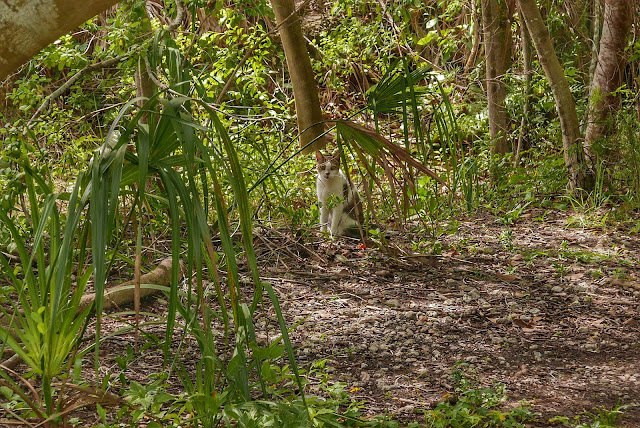 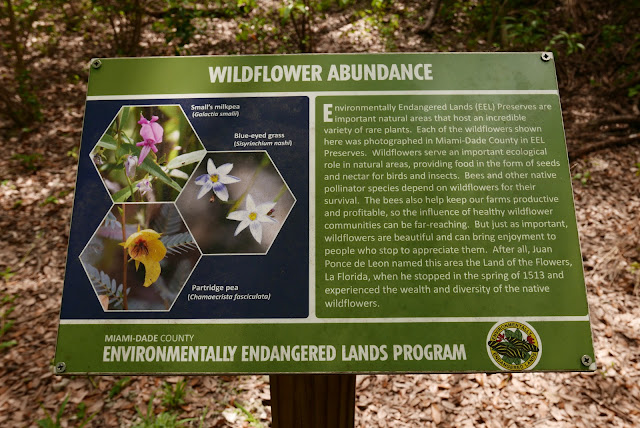 The shade was welcome at the very tip of the triangle, the southernmost point of the park, the proper entrance had I but known it. I found my way in by walking along a low wooden post and rails fence and hopping over when I saw an informal trail leading in the palmettos. The trail fizzled out of course where some homeless people had been camping but I pressed on thanks to the satellite view I had that showed me a wide roadway ahead. 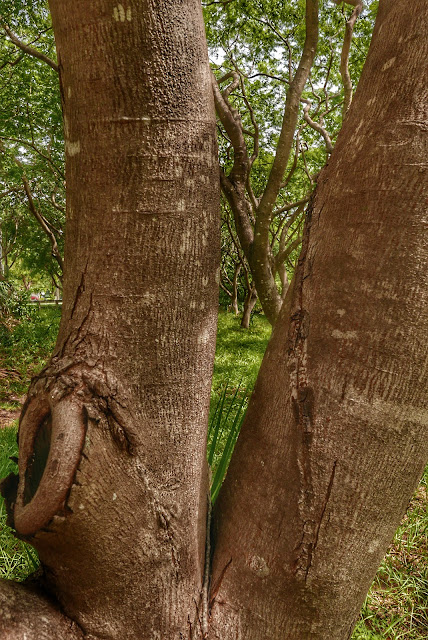 The funny thing is this park is a block away from the hospital where I spent some quality time in ICU and my mind was focused on things other than going for a walk in the woods. It was odd walking out and seeing Jackson South right there, now reporting numerous coronavirus cases in treatment. I was lucky I was run down when I was all things considered. To be recovering from a  road traffic accident now seems about as bad as anything could be. 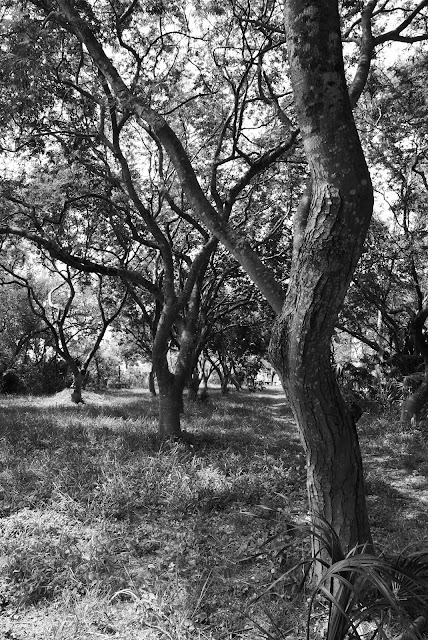 Another well worn sign explaining how much open space and woodland has been lost.  The Rockdale Story as told on the Dade County page devoted to this place:
"Pine Rockland is a designated globally imperiled habitat that occurs only in southern Miami-Dade County, the Florida Keys, and some islands of the Bahamas. Over 225 types of native plants occur here and more than 20% of the plant species are found here and nowhere else in the world. Five of these plant species are federally listed as threatened or endangered. These pinelands, interspersed with hardwood hammocks, once covered 180,000 acres of Miami-Dade County. By the time the city of Miami celebrated its 100th anniversary in 1996, only 2% of the pine forest remained, most of it within the protective border of Everglades National Park and within a few state and county preserves. From the air, remaining pineland fragments appear scattered across Miami-Dade's industrial, residential, and agricultural landscape, looking less like a forest than like islands of trees in a sea of urbanization." 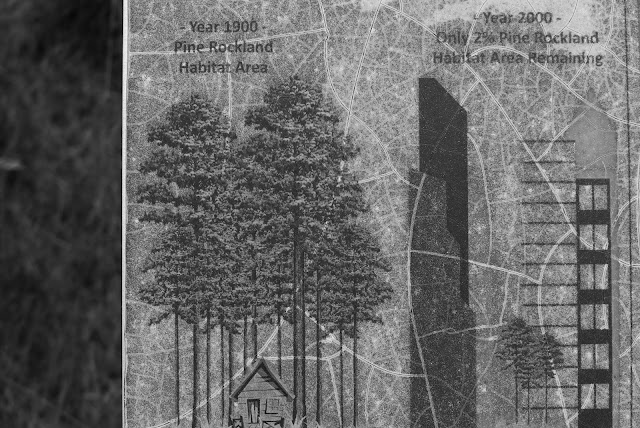 As you can tell most likely I enjoyed my walk  here all by myself. Early on I saw a head in a purple bandana moving purposefully through the brush and then swooped away on a bicycle down the trail never to be seen again. Fair enough. I was carrying my little camera, a Lumix LX100 if you care which is light and unobtrusive and easy to walk with in the blazing sun. I figured I would probably not be back so I took a bunch of pictures and I hope you enjoy them. I had fun taking them. 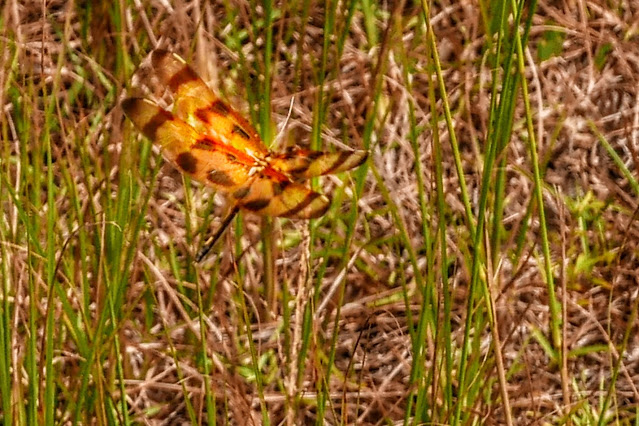 If you look online as I did for pictures of this place you won't find much while street view circles the park but never goes inside. 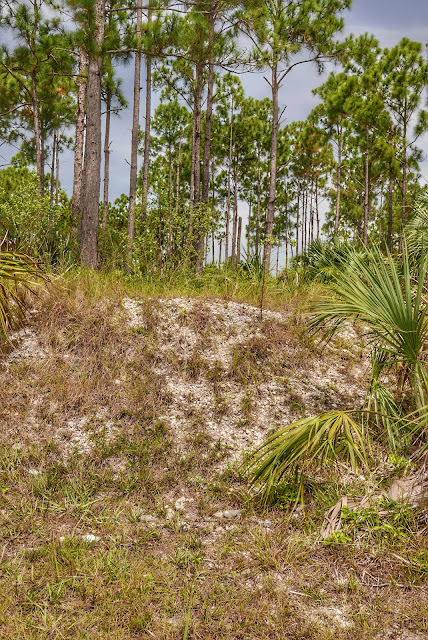 I don't know how well I illustrated it but there is a rocky ridge running through the park here, where the limestone is five or six feet high. I know that doesn't sound like much but in a state whose highest point in the peninsula is barely 300 feet in Lake Wales, an elevation of six feet is quite unusual. 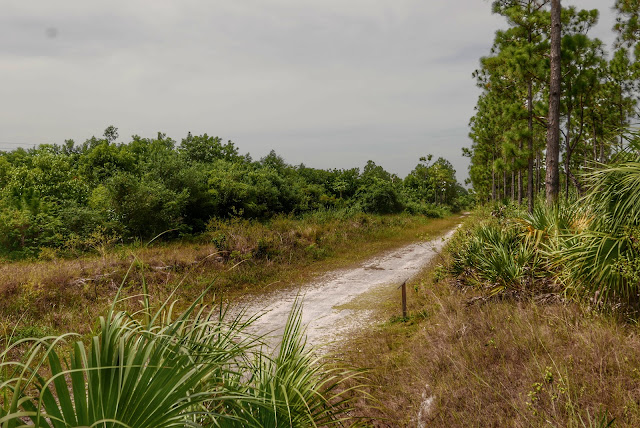 I took this picture looking down at the trail sign below me,  in an effort to give you an appreciation of the elevation, though I find it may be too subtle to notice. I guess you had to be there. 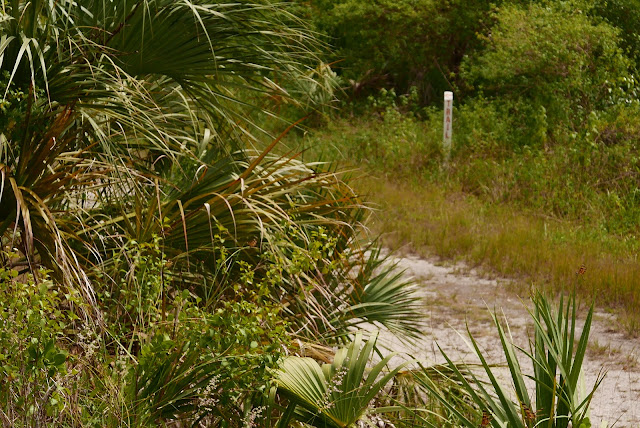 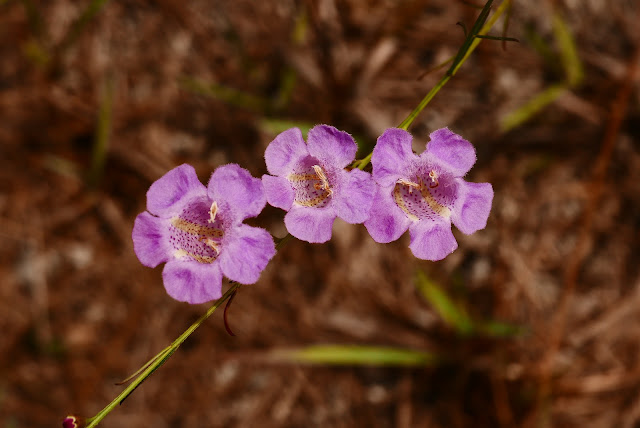 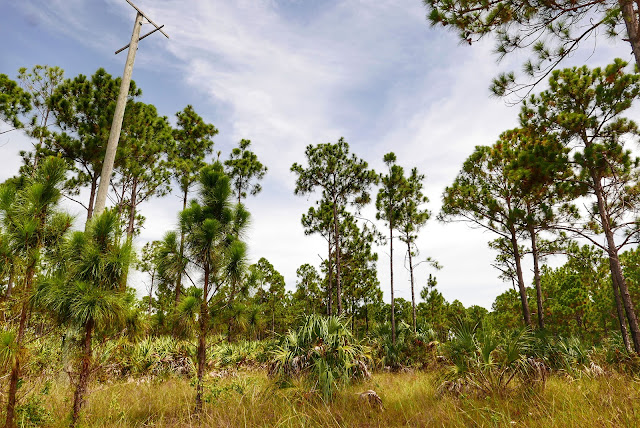 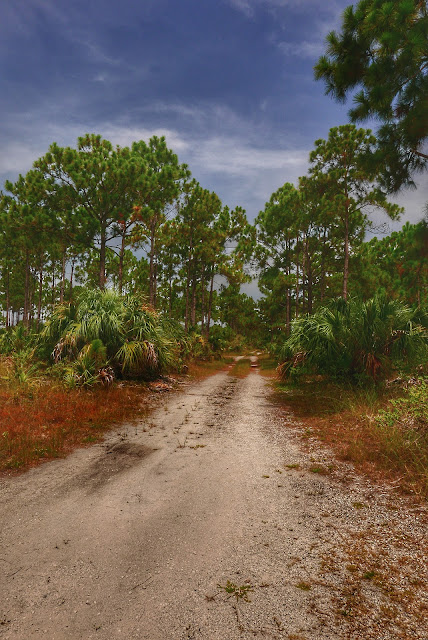 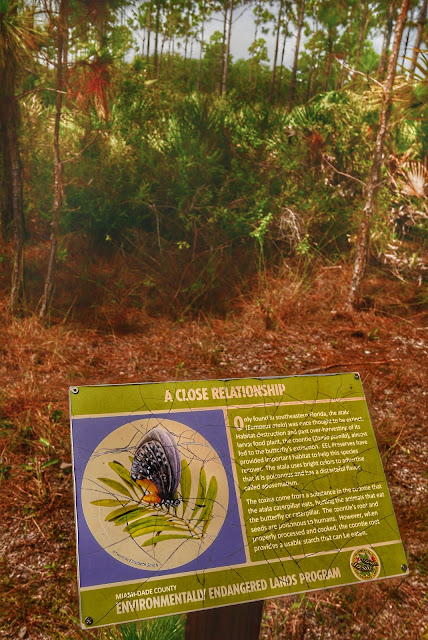 Pets are not allowed.  Grrr... But I did walk the red line, all of it. Ha! In that heat. I went masked to the library afterwards just up the street and cooled off with a book at a socially isolated table. 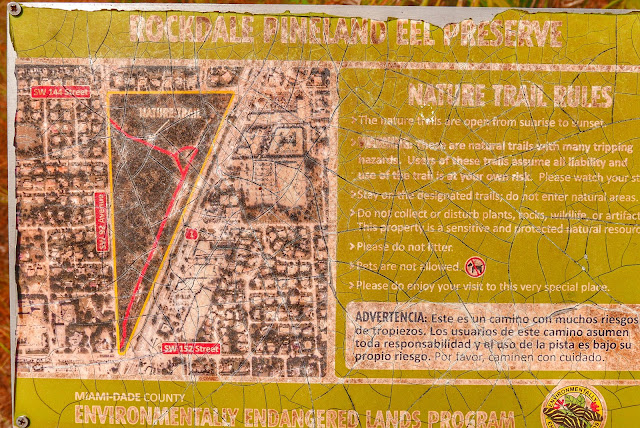 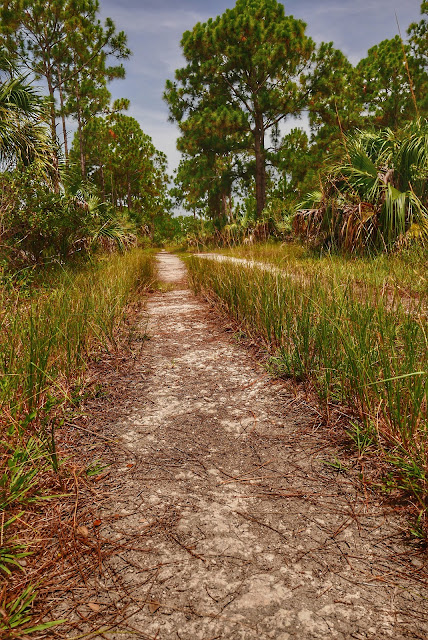 The other main entrance for pedestrians and bicycles. 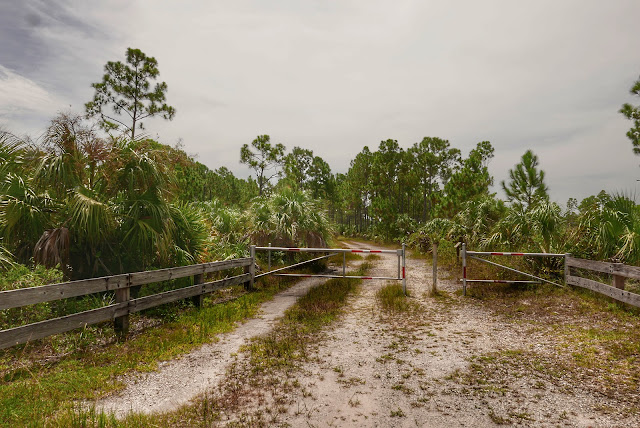 The world outside, beyond the post and rail wooden fence that surrounds much of the park: 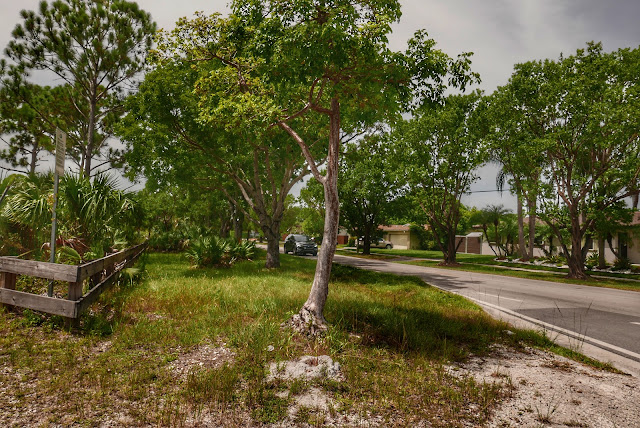 The library was excellent, a quiet serene cool spot to read for a while. Had I brought a cable I could have charged my phone from the USB port in the table. Nice! 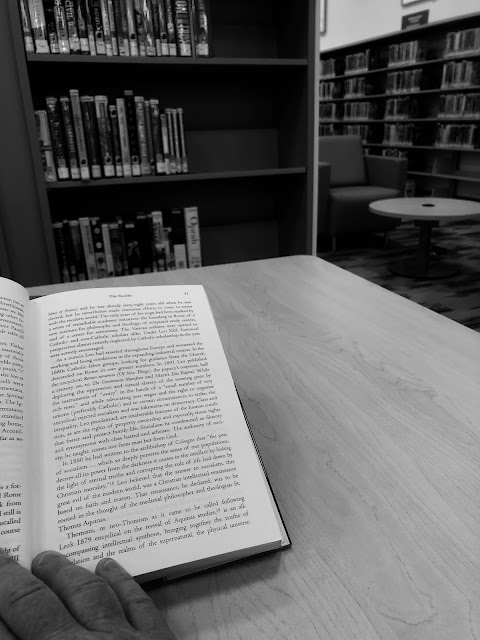 The van  was finished by one o'clock and I got the grand tour so they could show me the gleaming black under coat now protecting the vehicle from salt and grit and whatever else I throw at it. 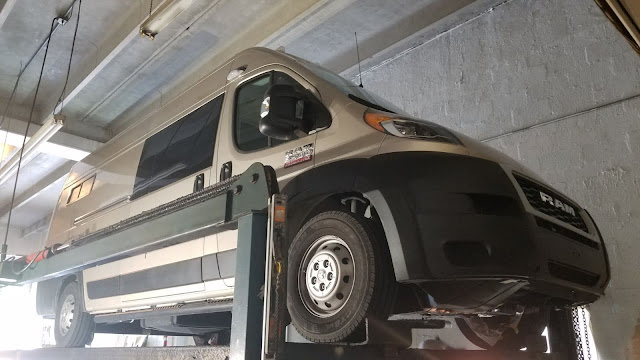 I got out of the city and raided the fridge for the lunch my wife had prepared. I parked in an empty lot in Homestead and picnicked under the roof air conditioner as one should in these overheated times. 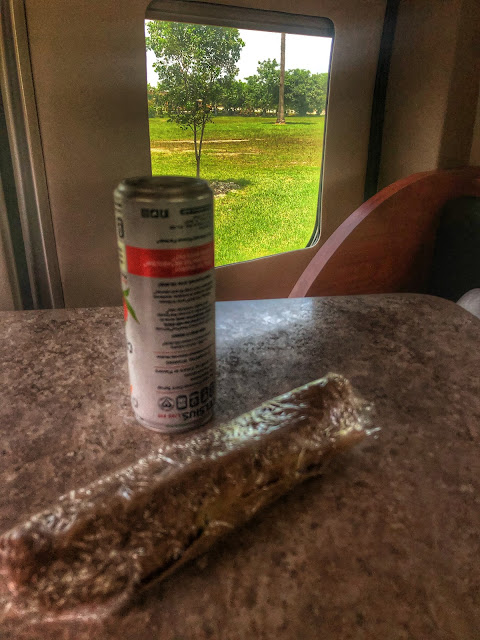 Travel by van is proving to be just too civilized. I could get used to this. I got Jamaican food at Yardie Spice for dinner and bolted for home. Not a bad day even though Rusty wasn't part of it. Gratuitous dog picture to prove he hates being left home to suffer: 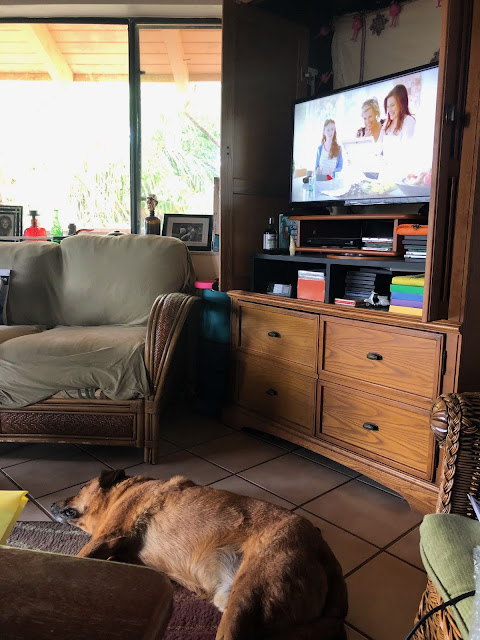 Posted by Conchscooter at 1:00 AM No comments: