I read that winter is closing in Up North and by all accounts it seems we face the prospect of a more severe cold season this year than in years past. Snow is falling, skies are gray and more of the same is predicted for the weeks ahead. Not in Key West, where it is an endless summer. And for that I am grateful. Seasons are appreciated by people other than me. Here's a reminder why: 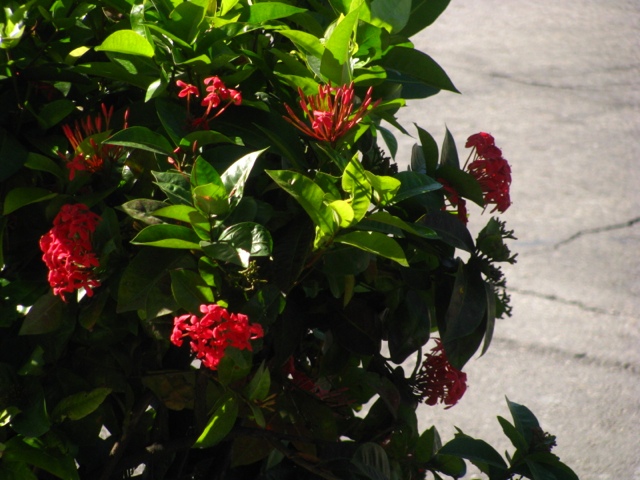 Posted by Conchscooter at 9:00 PM No comments:

I like the way these mobile homes get the color treatment on Big Pine Key. 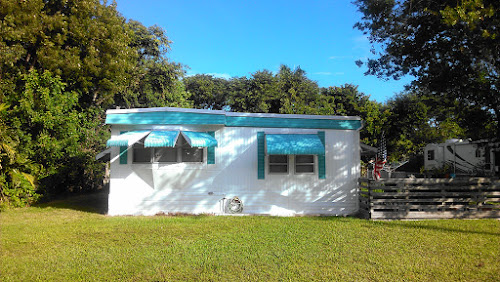 I lived for years on boats, a way of living the is frequently viewed with (misplaced) romanticism. I liken it to life in a trailer which gives the romantics pause. 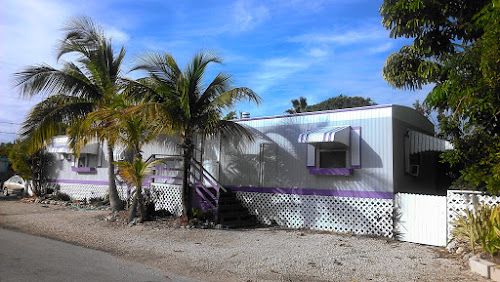 That's because living in a mobile home or the like is viewed with disdain in this country. To me it seems like efficient living. 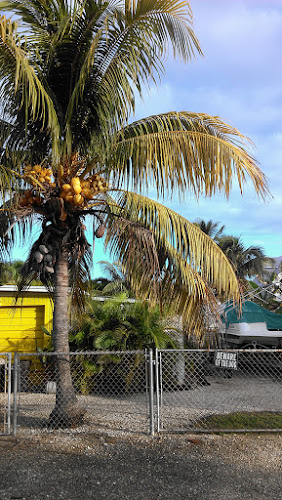 Put a coconut palm up, paint the house a bright shade of tropical and call it good. Looks good to me. 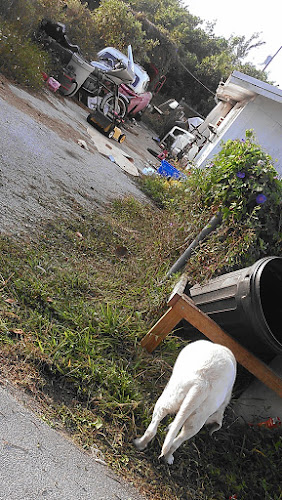 There is always the chaotic pack rat in an neighborhood ready to live down to the stereotype. And if you've got a nice vintage BMW rusting in your yard for God's sake get on with it and get it running, or give to someone (not me!) who can and will get it on the road.

The Monroe County Commission last week took some steps to move forward the process of gentrification of the waterfront on Stock Island. Big plans are in the works for the commercial waterfront tbthat will soon enough become home to recreational marina dockage with suitable support services ashore. The nature of the southern shore on the island will change, little by little and the modest homes built here for the Key West workforce will undoubtedly face changes in their own right. 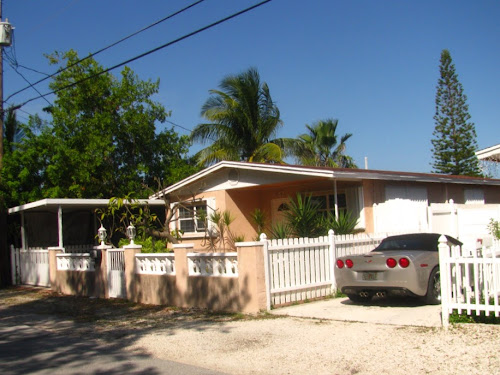 The Avenues is one area of concentrated residential building, a dozen streets laid parallel on the western side of the island, a place where homes sit cheek by jowl on small lots, a mixture of mobile homes and houses set down in neat rows. I took Cheyenne by for a walk and enjoyed a cool Fall afternoon under the sun. 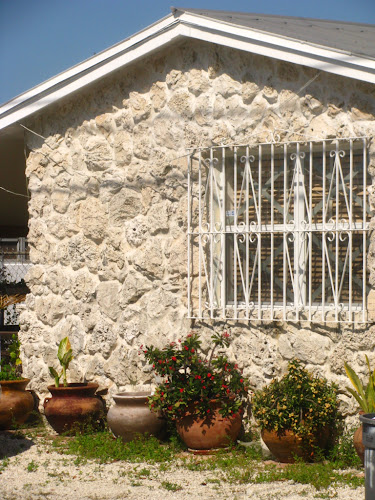 Srock Island is just east of the Big Tourist Kahuna called Key West and has for all recorded history played second fiddle to the seat of Monroe County. Stock Island is not a city and is unincorporated though that too may change in a few years if a referendum can be organized. Key West wants to add wealthy Key Haven, Mile Marker 5, to the tax rolls. However working class south Stock Island is another matter. 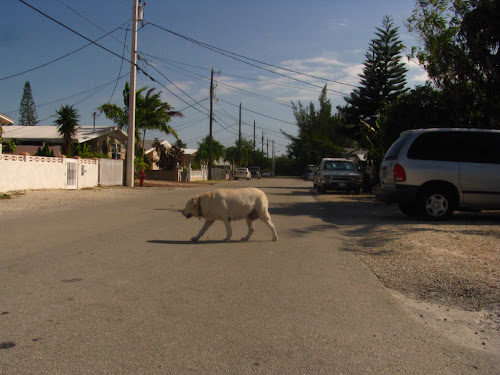 Stock Island, Mile Marker 4, got its name from the practice of keeping cows on the hoof here for use by the Key West population as needed. The unfortunate bovine victims were taken to Rest Beach alive, killed and dismemebered there and served on plates to the city residents. key West has restrictions on boat and trailer parking that would be hard to enforce in these parts. I am convinced city regulations as much as city taxes will prevent incorporation. 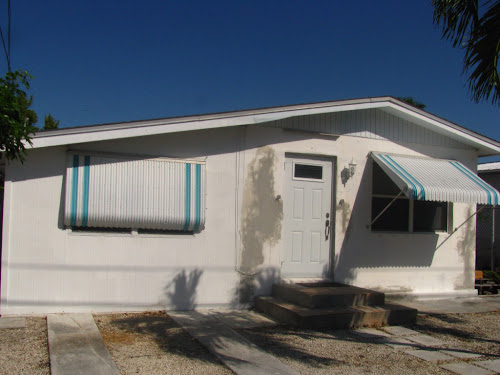 Stock Island's role in support of Key West remains today except that these are the homes of people who work in the city and commute from these more affordable homes. 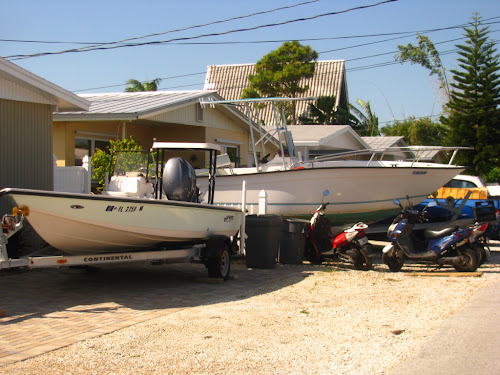 In the middle of the afternoon this is a peaceful spot to walk your dog as everyone else is away at work. Another reason to enjoy working nights! 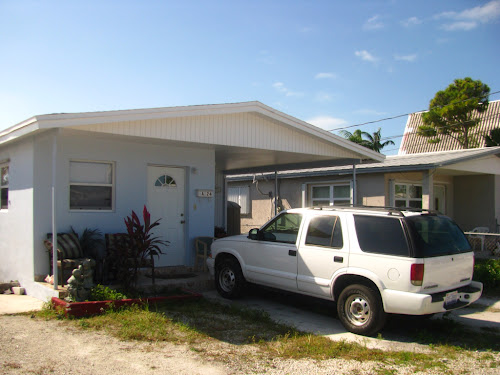 During the boom years some of the larger more solid homes commanded prices close to half a million dollars which seems astonishing now. 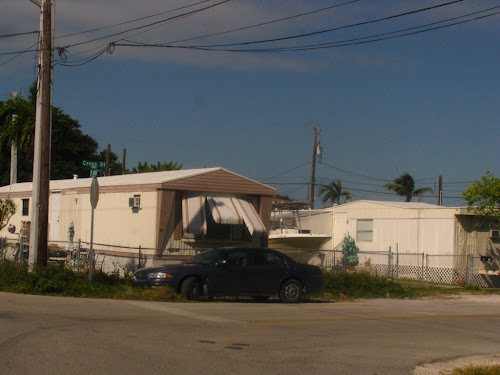 Stock Island may not be a city but it is urban. Around the corner on the streets and avenues to the east there are all sorts of businesses, once again of a type that couldn't make it on the expensive, densely populated soil of Key West. This is where body shops, carpenters welders and plumbers keep their offices and supplies. 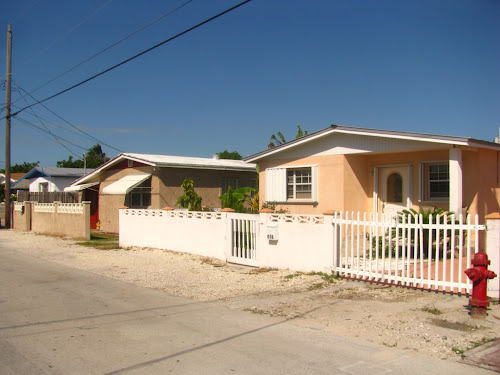 This is not an area of great beauty and I've remarked previously on my surprise at how only wealthy neighborhoods get greenery. It's as though the wealthier you are the more trees your street gets, which seems weird to me. 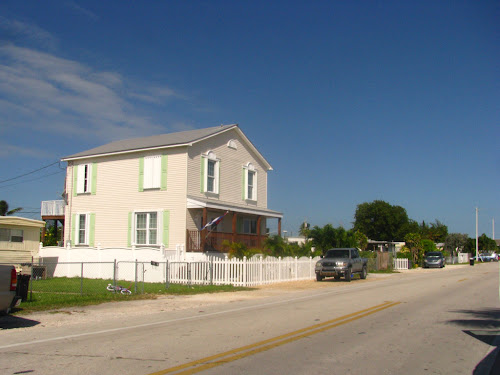 And those few bushes that do exist often support a threat as well. 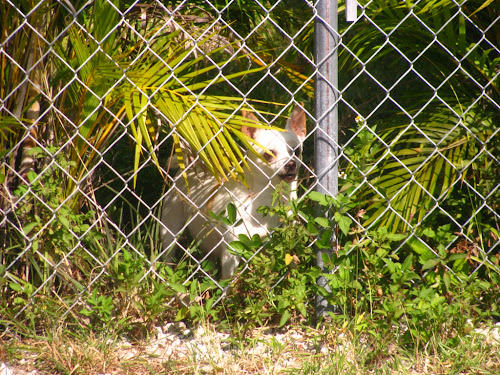 My Labrador ignored the frenzied barking and kept plodding stolidly along as usual. She found a pile of bread crumbs in the street. An indignant homeowner stepped out a d said "I didn't know dogs ate bread," which if true labels her as a prime idiot. What she actually meant was she put the bread out for the birds. There were no birds in the street when we approached but I guess the sight of a fat Labrador eating avian scraps was too much. We kept going and I even managed to tear Cheyenne away from the found deliciousness. 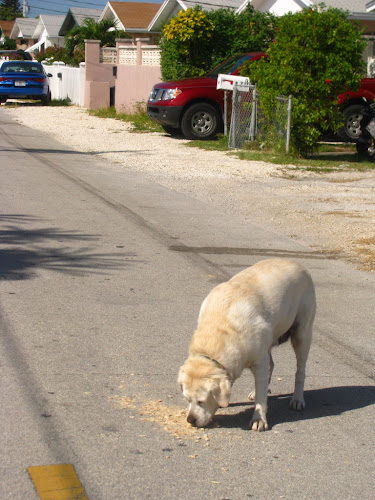 I saw this line of roofs, these wires all laid out geometrically and I wondered why there are no trees here. And no sidewalks either. City services wouldn't be all bad though I don't suppose the residents will ever know. 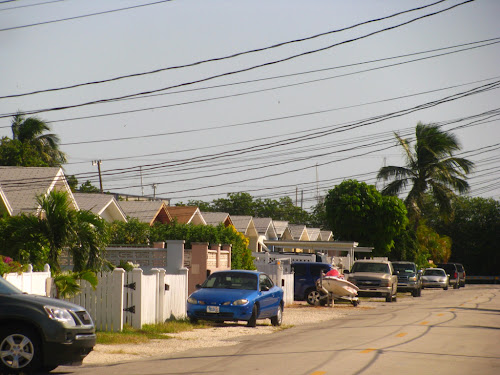 Funny place the avenue but it was fun finding it cool enough to walk in the noonday sun at last. It's been a long summer.