It has not been a very wet year so far this year. There have been sporadic thunderstorms but heavy drenching rain has come and then all too quickly gone. Anecdotal evidence says it wasn't always so. One anecdote could be this essay I wrote in September 2008. This blog has been around a long time I guess.

So, here you are, finally in Key West, your vacation has begun, your worries are few and you are all set for some sunshine and blue skies. Until that is, a monstrous large black cloud, half the size of Greenland heaves into view over the northern horizon, and vacation plans get interrupted. What does a a visitor do? What so many of them do anyway, rain or shine: 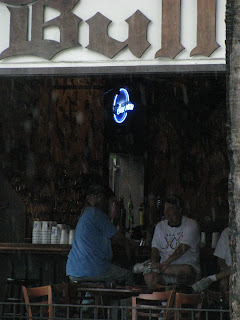 Talking bull isn't limited to the corner of Duval and Caroline. No prizes for guessing this is Sloppy Joe's: 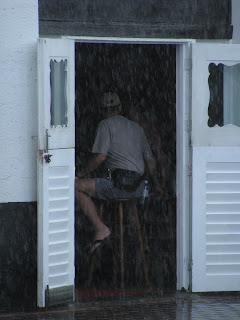 Or somewhere on Greene, Guy Harvey I think but I could be wrong. I don't frequent the bars, as must be obvious: 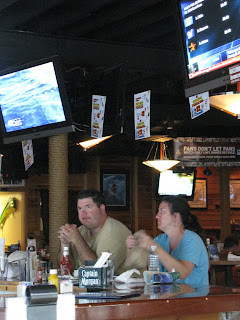 Or at whatsits name on Duval, Fogarty's perhaps? I could see someone was not making the most of a bad thing, with that body language. Pity the poor people depending on his tips to make ends meet: 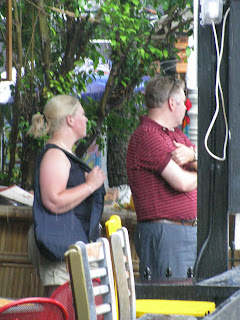 Those are the better known watering holes where I saw people stranded by a typical summer downpour. Locals have their own hangouts, for instance a beer never tasted better than at the Hilltop Laundry on Elizabeth: 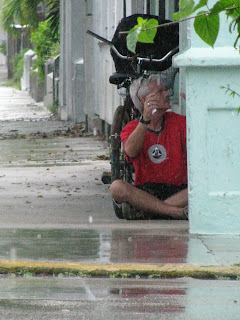 Or just hanging with a bud at the Arab's store on Caroline. That the owner is actually from Bangladesh doesn't mean much in a culture devoted to the easy pigeonhole. If you dial 9-1-1 from the 700 block of Caroline and tell me you are at the Aay-rabb's this is where I'll send the cops, and I won't even plague you with a short history of the partition of India either. We'll just agree that this place is run by an Arab... 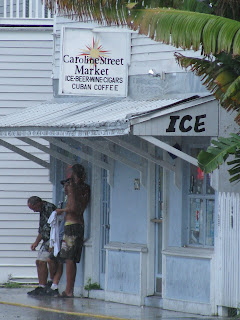 Talking of Caroline Street the red Humvee is back, and I read in the paper that the Coffee Plantation is for sale if you feel like running your own business here: 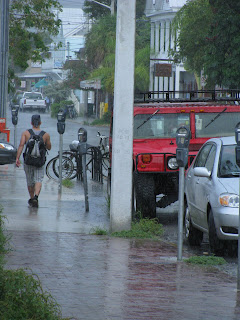 Rain storms come and go in Key West mostly between June and October more or less depending on droughts and the moods of the gods. They lower temperatures to a brisk 75 degrees (24c), they wash off the dust and leave the air sparkling and fresh after half an hour's downpour. Locals keep working during the rain: 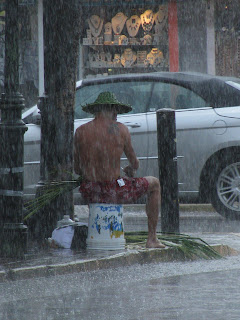 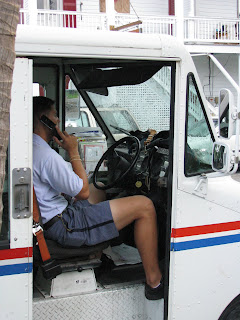 Or, if there are no customers they shoot the breeze while the raindrops fall like snow flakes all around: 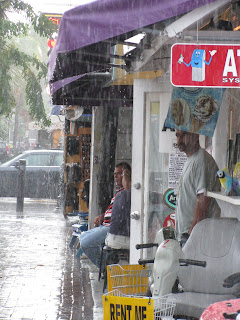 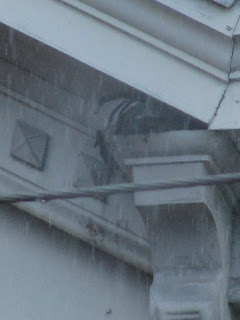 While others don't bother: 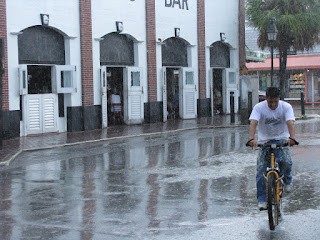 Some take advantage of overhangs as they go: 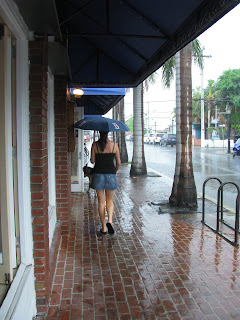 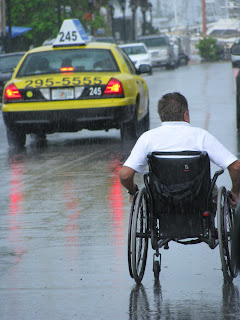 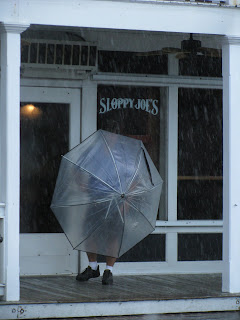 Others don't have the patience for that folderol: 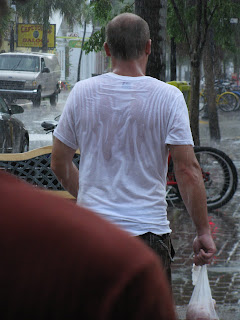 Others wrap themselves in plastic while some people just take their clothes off. Duval can start to look like a wet t-shirt contest but I am not bold enough to shoot blatant close up pictures of the wet bold young women striding down the street: 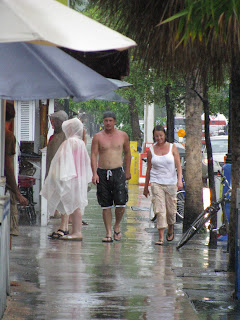 People who ride the Conch Train get free body condoms in bright yellow: 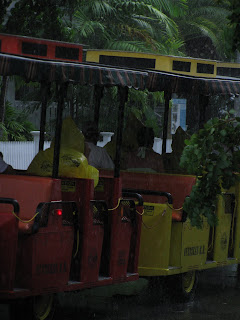 The tourists who choose to take the Trolley Bus on a rainy day get the benefit of modern technology, called windows: 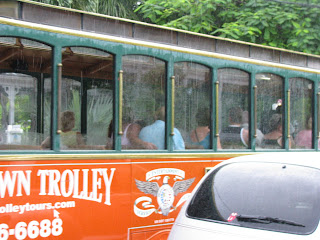 One of the pleasant things about choosing to live in Old Town that is often touted as a blessing is the ability to live without a car, an advantage touted only in Key West and Manhattan (in the US) as far as I know. The advantage Key West holds is the mild climate, nevertheless it's a climate that can lull some riders into a false sense of security and they neglect the simplest of weather precautions: 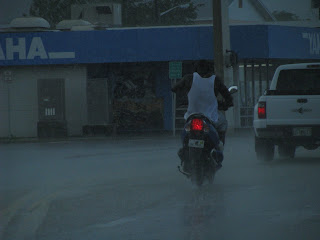 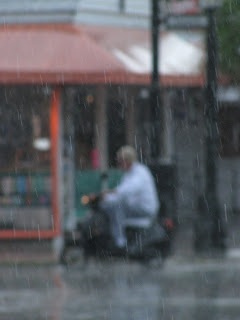 Some two wheelers come prepared to fight the blizzard of rain: 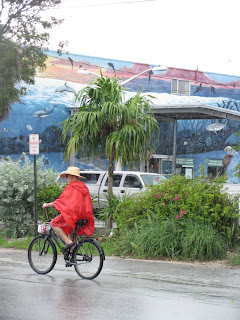 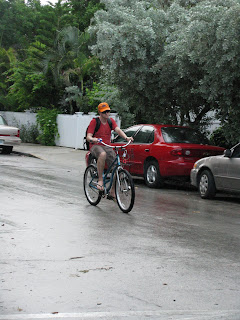 In the end it doesn't matter much. I got to the Tropic absolutely soaked, for I was surprised by the intensity and duration of the downpour as I strolled across town taking pictures. I sipped my coffee and and watched Bottle Shock as my clothes steamed gently in the darkness. What a pleasure to live where rain bothers one so little.
Posted by Conchscooter at 12:00 AM 1 comment: