Van By The Sea

As picnic plans go I thought it was pretty slick. Take the van go and sit by the ocean, walk the dog, enjoy the breeze and spend a few hours reading and napping. It was my one day off in ten days and I planned on enjoying the view on a lovely sunny day of low humidity and, hard to believe, no rain in the forecast. 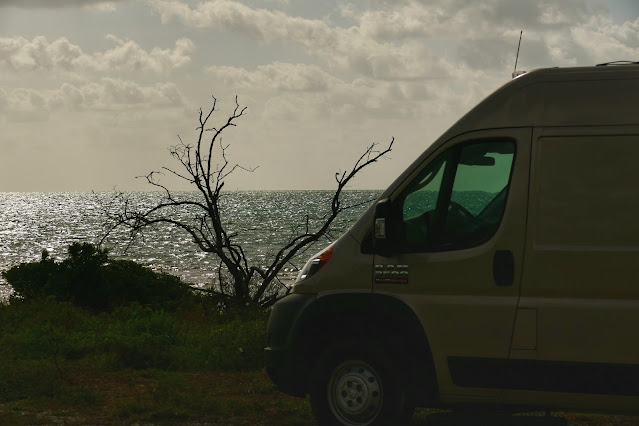 The text from my boss set me back. Emergency overtime with two people calling out sick. It's that time of year when people like to escape the September heat by taking vacation, so even had I not wanted the extra money I would have had to go in because someone has to be there to answer 911.  I had to leave for work at eleven o'clock so I rushed Rusty downstairs, remembered to unplug the power cord and took off. 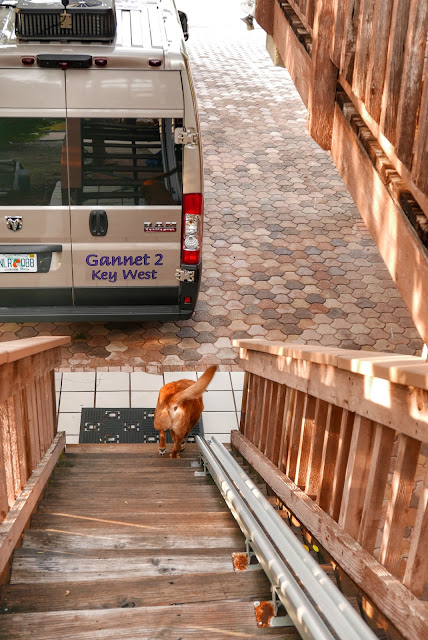 Before hurricane irma wrecked this stretch of waterfront I used to come here every chance I could with a book and a chair and take my ease in the shade. The waterfront isn't very good for swimming as it's rocky and exceeding shallow but the breeze blows straight off the water and on the warmest days its not a bad place to be. 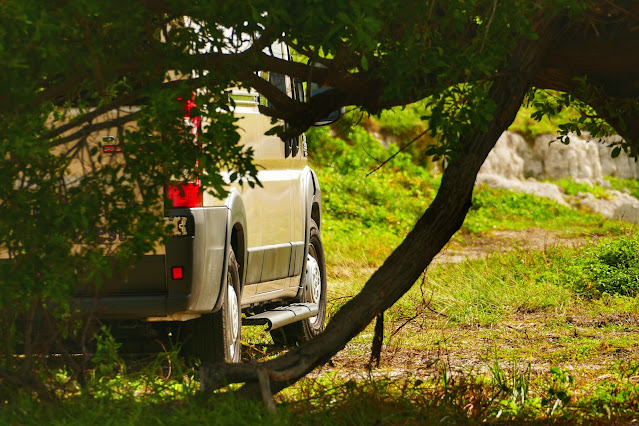 They've rebuilt the bridge supports and the seawall and cleared the bike path and the gumbo limbo trees are growing back. I was surprised to see the state even paid to have the paved access ramp rebuilt after the hurricane tore it up and threw it into the ocean.  So it was the work of a moment to steer the tank down the hill into the gravel and grass.  Rusty hopped out and gave the place the usual once over. 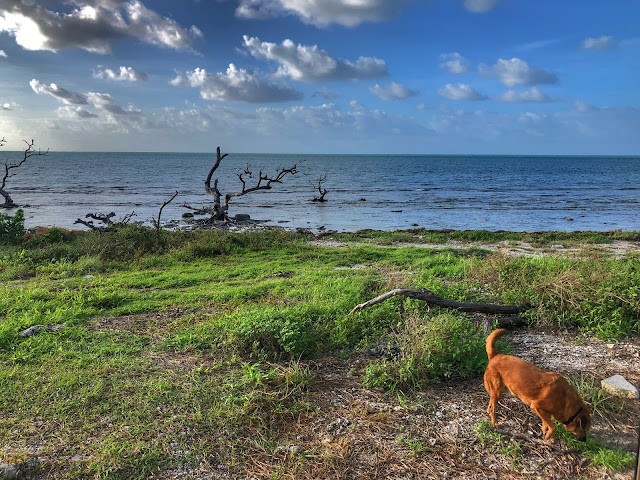 However I had a cunning plan. I had previously observed the gravel laid down along the seawall was compressed thoughtfully by some other people and I had walked it with an eye to maneuvering a 21 foot camper van on the track. 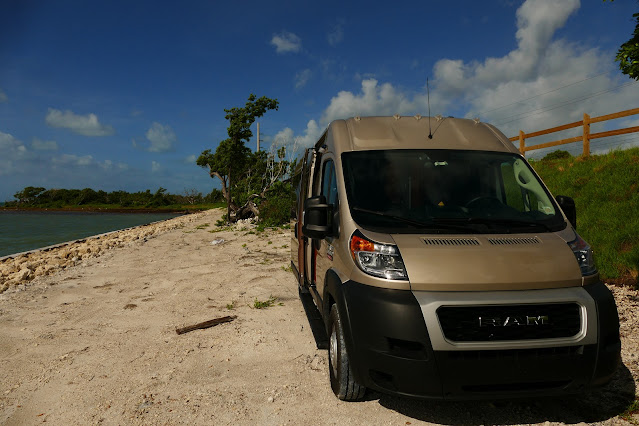 When Rusty was ready we got back in the van and we drove down the dirt track into the dead end at the end of the seawall. Compared to more experienced truck drivers I worked with many years ago I was not great at backing an 18 wheeler into a loading bay but compared to non professional drivers I have a pretty good grasp of how to go backwards. 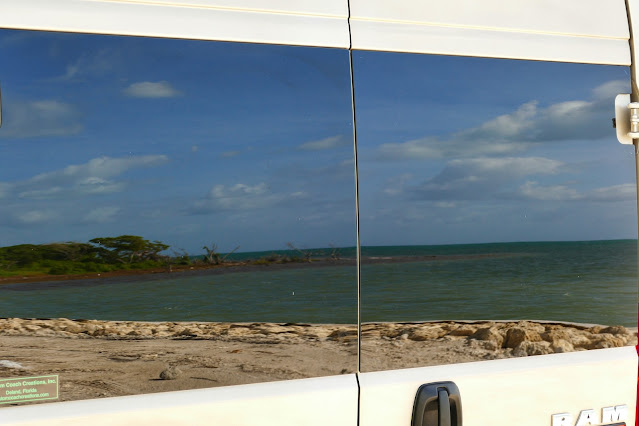 The Promaster has an excellent (optional) reversing camera which makes it easy and I was confident we could back down if I had miscalculated and the van, all 21 feet of it, couldn't make the turn around. However I backed and frothed a few times, ignoring Rusty's impatience to descend, and got Gannet 2 facing the way we had come. 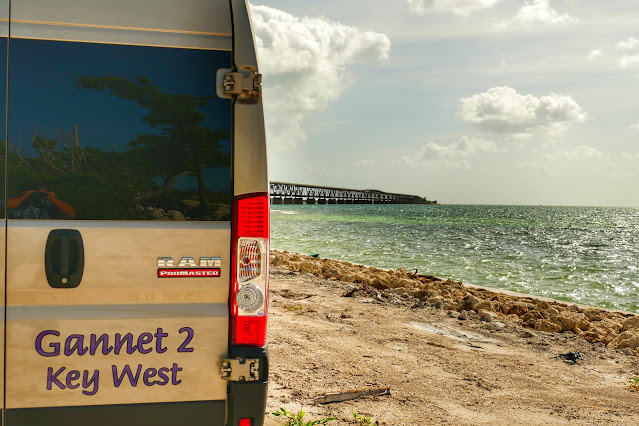 It's a lumpy track but we took it slowly and aside from some swaying (all cupboards were locked) it was no problem at all and here we are facing the way we had come: 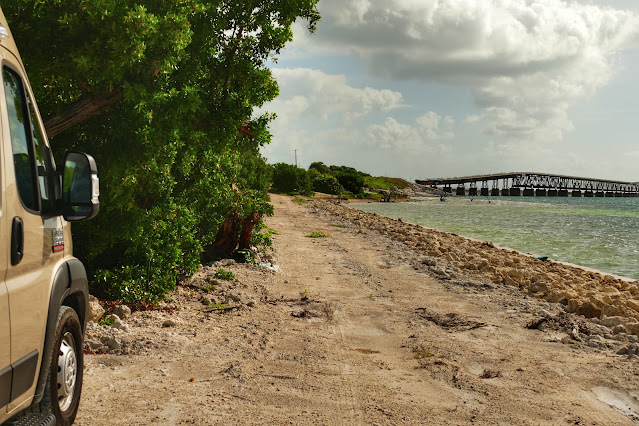 I released the hound from hell and threw the side door open. 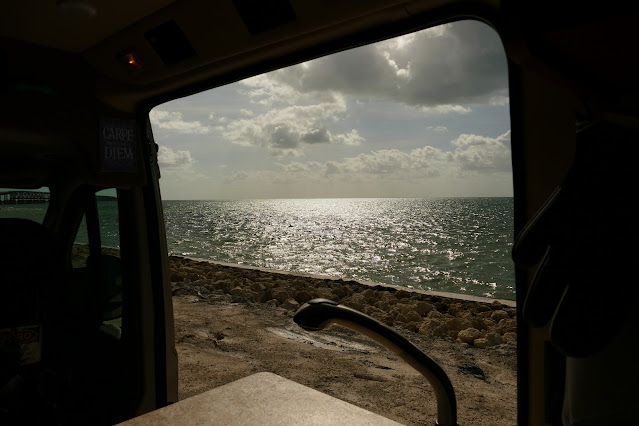 The hurricane that blew in only increased after I got the back doors open and the cabin became a wind tunnel. Fans, air conditioning and all that were absolutely not necessary. I got my book out and left Rusty to root around outside. 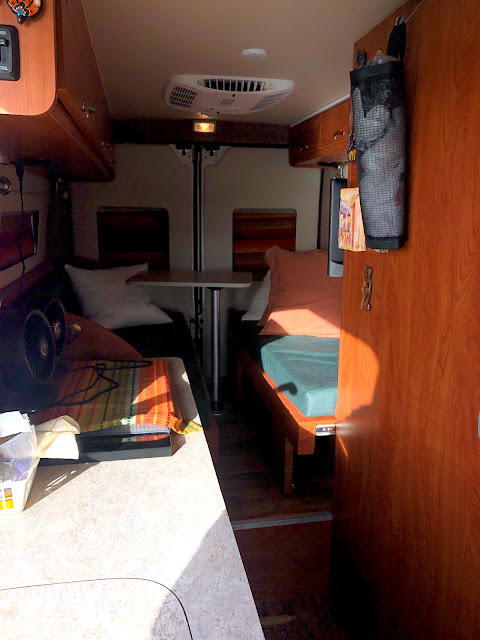 It would have been an excellent spot to spend the afternoon and watch the sun set even though most of the view is looking south. A couple of chairs, a table all of which we carry in the basement of the van and we would have been set to have a dinner by the ocean's edge. Not bad. 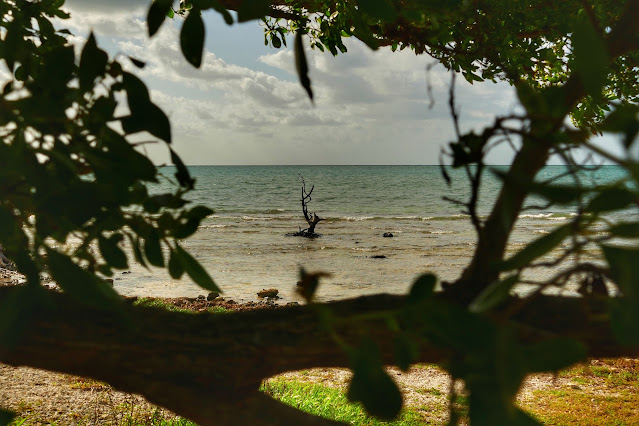 I have 620 days to go until I retire but this is a way and a place to remind myself why I am looking forward to hitting the road. 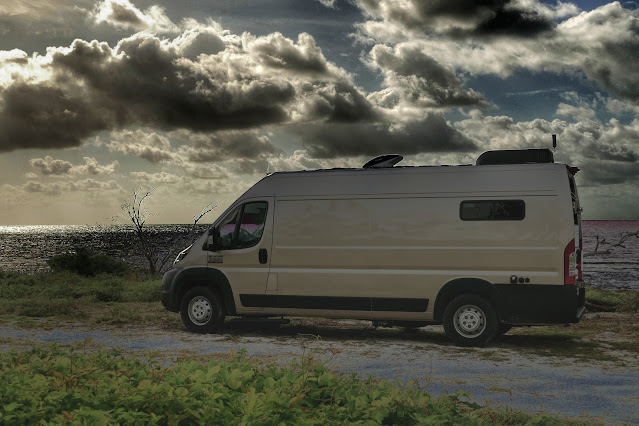 I am not fond of aphorisms that are thrown out online all the time, "Today is the first day of the rest of your life." Or "Live your best life" or some other platitude. Portentously stating the obvious. However there is always the exception and I have no idea why I stopped to read this one but it fits with how my wife and Rusty and I are starting to adapt to van life. A little at a time, shifting our perception as we go is how we did it when we moved onto a boat prior to boating away and now we are doing the same as we prepare to go vanning. I found the advice good for life changes putting into words what I have got in the habit of doing over the decades. Its framed for "behaviors" but for me it works for lifestyle changes too! 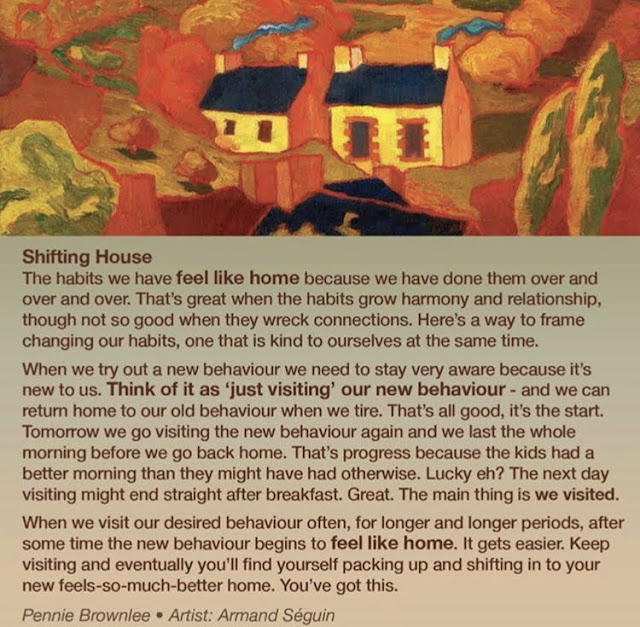 Slowly the van will start to feel like home if we get this right.
Posted by Conchscooter at 12:00 AM 1 comment: