Cheyenne liked early mornings on Ocracoke, a brisk 48 degrees worked for her, and once the sun was out and the rain had stopped I found it bearable though I was bundled up as though in swaddling clothes pretending I was an under dressed arctic explorer. 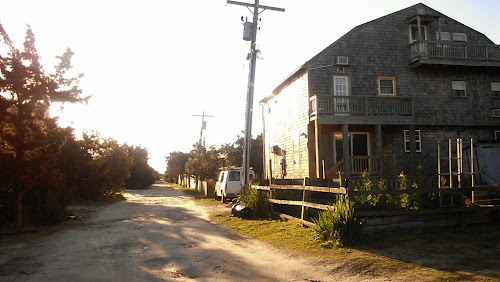 We stayed at Pam's Pelican, a charming B and B though as it was housed in the large tall building you see above, the flights of stairs to our room were steep and Cheyenne suffered as a result, developing a stiffness in her legs on our last morning that prompted a stop at a mainland vet's office. 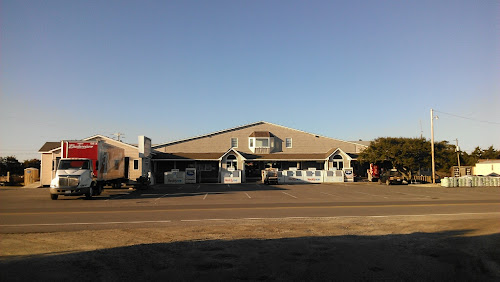 Above we see the island grocery store preparing for Easter as only a tourist destination knows how: with a visit from the Budweiser truck. Looking south, the sun was clearly low on the eastern horizon to the left in the picture. The Hatteras ferry starts early in the day, around 5am weather permitting, so deliveries take place at mainland hours. Cheyenne was still walking well and she was leading the direction of travel so we didn't pause long before she took off up a side street. 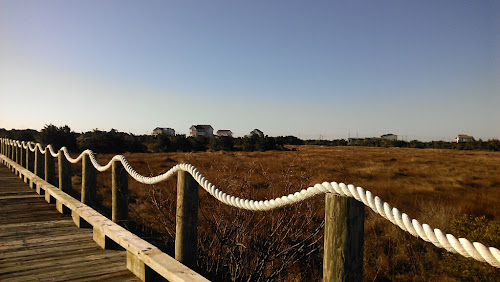 Breakfast was at nine and a text message from my wife reminded me in no uncertain terms of the immutable deadline. Cheyenne was oblivious sniffing every errant blade of grass, trotting back and forth and having the time of her life. I decided to try my mapping function in my phone and miraculously it showed me exactly where we were. I thought I saw a footpath, a short cut across the back of the island to breakfast... Off we went. We passed Horse Pen Road and came to a magnificent bridge leading to...nothing. A failed development apparently and it's known by derisive locals as the Bridge to Nowhere. We plunged on into the marsh beyond. Cheyenne was in her element still, and becoming girlishly puppyish, prancing rather than walking sedately. 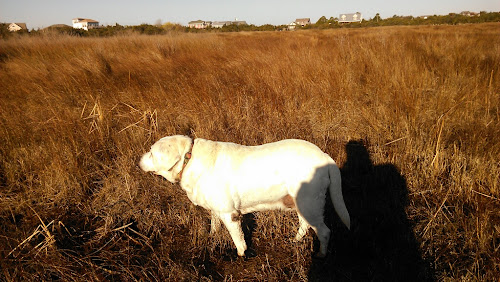 I don't suppose I have to point out the map was a little optimistic and the path beyond the Bridge to Nowhere petered out into the boggy morass between the two spits of dry land. Cheynne got black boots and I got some muck on my sneakers but we burst through the pine trees onto a construction site. The carpenter showed no surprise as we strolled through his workplace under the half finished house. He made friendly noises at Cheyenne as she inspected his handiwork and laughed with me as I told of our marsh crossing adventure. In a mainland situation we would have got looks of incomprehension from an imported central American laborer or howls of indignation from construction workers fearing lawsuits. In delightful Ocracoke we got to share a laugh. Nice place. 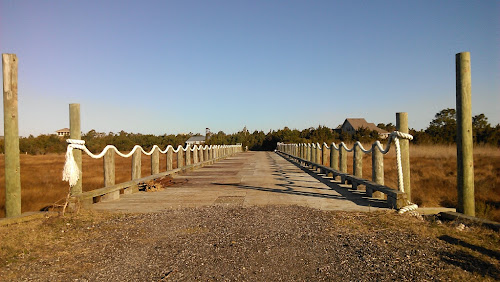 There was no one else around as we plodded back to the breakfast table. The backside of Ocracoke village looks huge with wide open marshland and pine woods. 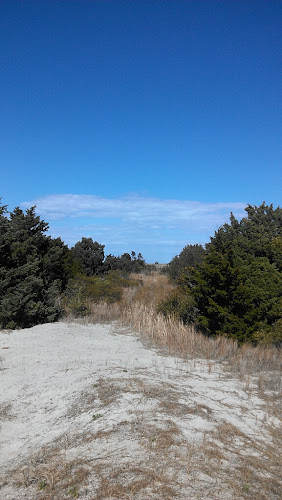 We made it back to breakfast In time for my wife in our room to text "Where are you?" and for me to reply with some satisfaction: "At table." Modern electronics will be the death of us all. 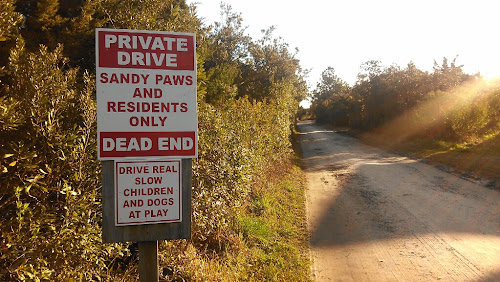 They built the lighthouse on Ocracoke in the mid 18th century for half the $20,000 budgeted, but within twenty years it became less strategically useful as storms had moved the sands but it still operates today, a fixed light maintained by the National Parks Service. We hoped to climb it but the tower was locked reducing the stubby little thing to a mere photo opportunity. 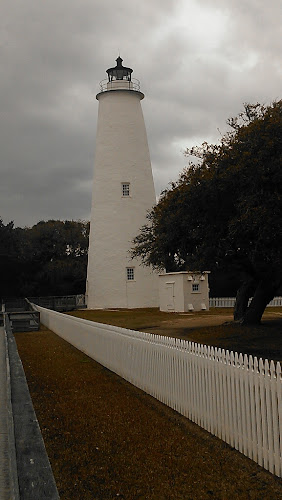 The other main tourist attraction, always mentioned in guides, is the so called British Cemetery, another product of World War Two. A British armed trawler on submarine patrol sank and 33 sailors lost their lives. Four bodies washed ashore on Ocracoke, only two of them identifiable. They are buried here in a cemetery maintained by the US Coastguard and supervised by the Commonwealth Graves Commission which helps maintain British, Canadian and Australasian war graves around the world, 500 of them apparently. 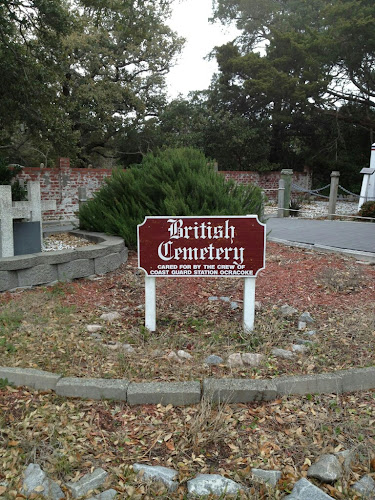 It is a rather more melancholy site than the USS Maine cemetery in Key West, probably because it was a gloomy moment when we arrived under gray threatening skies. It is a modest spot, an odd thing to promote so heavily as a tourist attraction, this minature cemetery marking a forgottren incident in a distant conflict. 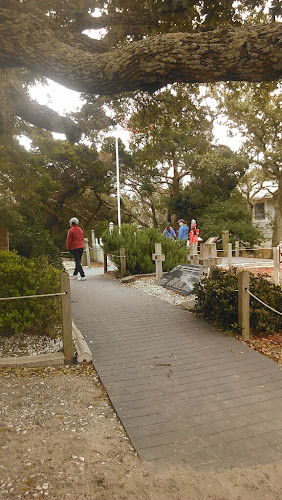 Lunch was the Mexican Food cart one more time with a retreat to our heated room to eat the tacos. For some people the "quaintness" of Ocracoke is overwhelmed by the absence of glitz glamor and activity. For us there was plenty to see and with only two full days at our disposal we determined to leave no tourist site unvisited. Long languid lunches were out of the question! 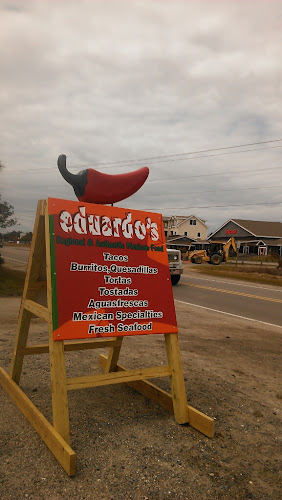 In many respects there are similarities between this tiny village of 750 and Key West. There is one of everything on this island, and the 21st century has intruded quite successfully so there are a wide range of services. The Internet is high speed, cell phone coverage is good and the ferry connections make travel almost seamless. Residents learn that the weather can be a true source of interference with their plans, from broken roads, closed bridges or stalled ferries. Hurricanes flood the island from time to time and we traded storm stories. Winter winds close ferry services and that gets "annoying" as one resident put it. Yet the good bits include winter gatherings at the community hall or the social building of the Methodist church where people share food and music to keep the loneliness of winter at bay. The nearest movie theater is in Nags Head more than an hour, plus a 60 minute ferry ride, away. 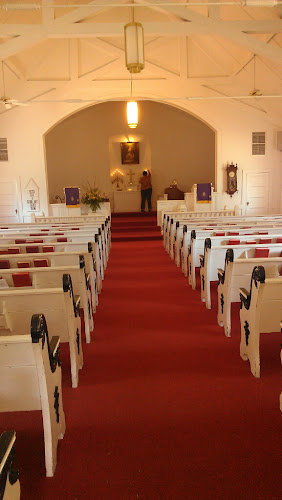 It is emblematic of island life in a small village that one space serves many purposes: 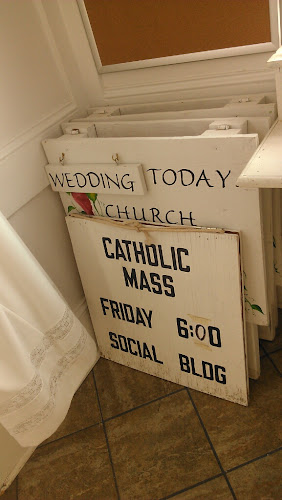 Story telling is a big part of the island's culture, unlike the island chain to the north where the pace is a good bit faster. O'Cockers appreciate a good story well told. In the NPS visitor center these two photos tell the story of encroaching development in the village, and even though modernity has arrived the old ways are not entirely forgotten. Like Key West and many other small communities, there is a wistfulness among long term residents, a sense that the best may be behind them, that the Good Old Days are lost and irrecoverable and an element of ruin has crept into the village along with modern conveniences. 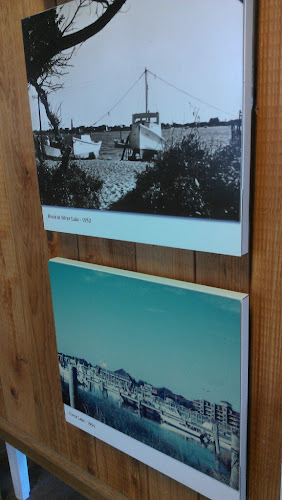 Springer's Point Preserve is also on the tourist list, a small wooded area preserved for ever and a delightful spot it is too. The trail runs through woodlands down to a beach on the north shore of the island. Bicycles are prohibited which did not prevent a group of dingbatters (mainlanders in the Brogue) from riding hell for leather along the trail forcing us to step smartly aside to let them through. They apologized as I clutched Cheyenne's collar and we stepped into the bushes. Lawlessness is part of the historic fabric of Ocracoke I suppose. 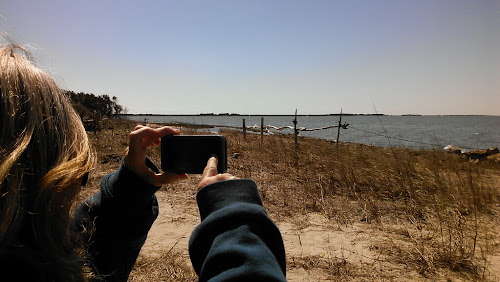 It was here that Blackbeard was finally caught and killed by Lieutenant Robert Maynard after he broke lose from his amnesty and took to piracy again  after settling in Bath up the island chain. They say his headless corpse (the head was severed for proof of death to claim the 400 pound reward), circled the ship three times before sinking forever beneath the waves after his death. Mind you a character like that will inspire all sorts of nonsense no doubt. It was a lovely spot in which to die, but all three of us made it out alive. 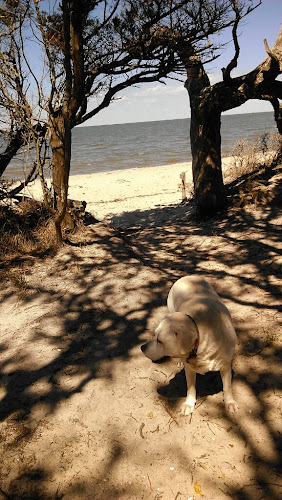 The walk isn't very long, a steady pace will complete it from street to beach and back again in twenty minutes but the fact that the wooded walk exists at all, far from human civilization in such a small community seems like a miracle. It's a bit like visiting the old secret garden off Simonton Street in Key West, lush greenery in an unexpected spot. I could imagine coming out here with my Kermit chair on a warm Spring day with a book and a dog and enjoying a day at the beach, or in the woods. 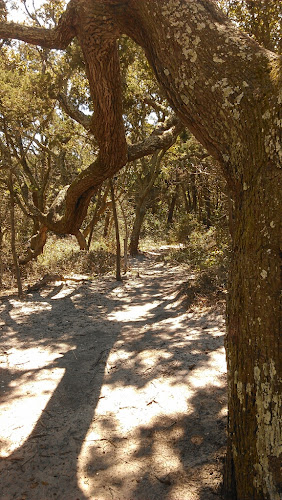 As you can see there is no sign of the bustling village just over the hill. 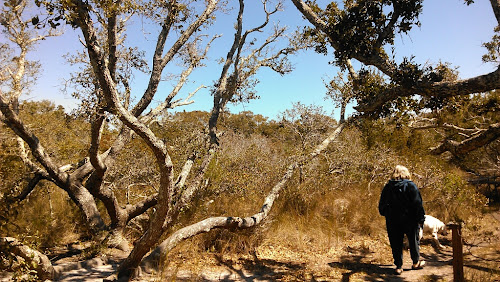 It was sunny but not at all hot, yet the modern preoccupation with water was evident everywhere. Nowadays one doesn't get thirsty, one hydrates and one hydrates even if one isn't feeling thirsty. I blame television but common sense is decidedly on the wane, as though "feeling thirsty" is too old fashioned a sentiment to be considered reliable in our microchipped and transistorized world... 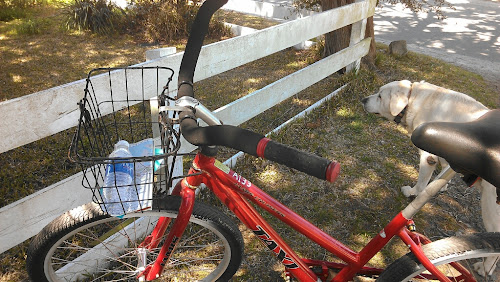 Drinking water is available everywhere in Ocracoke with vending machines and stores competing for your hydration dollar. I watched these visitors struggle to wobble their bicycles, read their maps and not get run over, just like their counterparts in the Southernmost City, though motorized traffic was negligible here. 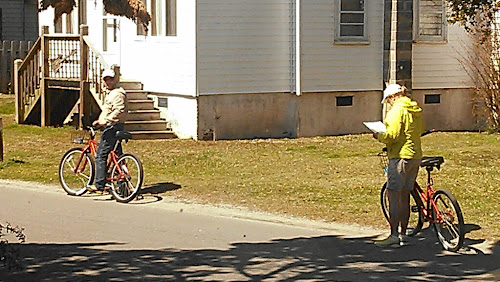 In order to prevent claustrophobia from forming in the confines of the village we drove the thirteen miles back to the north ferry landing. Most of the road is straight as a die but there are a couple of curves through a small pine forest. There is an airstrip and a campground on the way out of the village, both run by the Parks Service, there are the pony pens a few miles out of town but most of the road is a stright srip of black tarmac bisecting the sand dunes. We parked in the empty lot next to the Hatteras ferry terminal, a dock with no homes next to it, just a toilet and a vending machine and went for a walk on an almost deserted beach facing distant Hatteras across the sand and water. 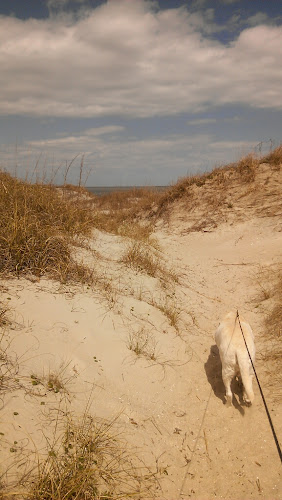 There was a breeze, the tide was out and the sand was firm and we were alone, and it was lovely. Even Cheyenne found stuff to hold her interest. What it was I know not and none of us looked too closely at the animal remains. There are other problems with these beaches apparently:
http://villagecraftsmen.blogspot.com/2013/04/barefeet.html 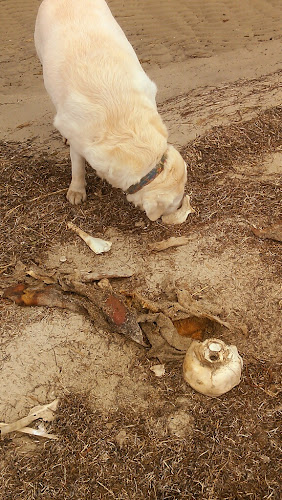 Of course the Park Service prevented me from attaining my ambition of standing next to a sea marker on dry land. They were out there, stark little eiffel towers waiting for the tide to return and wet their feet. 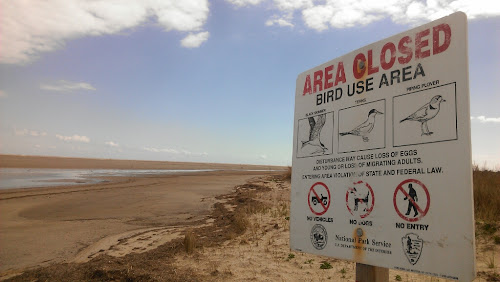 When I got home on Saturday to the Keys I was seized by an unfamiliar sensation. Usually a trip to the mainland produces the feeling of relief that I am back in my small town surroundings. This time the trip to Ocracoke had me comparing the Lower Keys as though they were the vast metropolitan agglomeration by comparison. Granted it was low season but the absence of cars, the long empty beaches and the cheerful greetings from islanders after only two days in their midst made me wonder waht is so laid back about my home town. 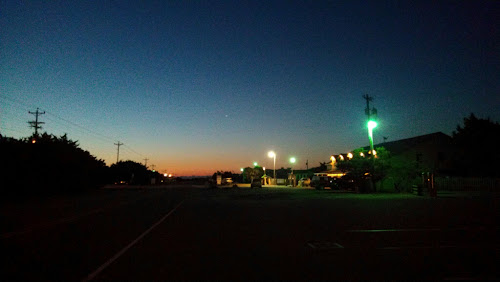 Our last morning on Ocracoke as we packed the car with bags and a stiff legged dog and I watched the sun come up one last time. I felt like I was leaving Shangri La. How odd.