The Week Of Weird

It's finally here, the week when clothes come off, inhibitions are cast to the wind and Duval Street becomes the Party Zone. I don't like Fantasy Fest but I put up with it because it's here. Historically it was needed to fill an economic void in a city that had no income from May to December, nowadays I would just like to have some quiet time in the two months of the year when visitors are few. Instead we get this madness and I plan to show as much of it as I can with as few irritated comments as I can on this page. This year, for the first time in years I am not working the night of the Grand Parade so that might actually be fun if the floats are political and relevant to the past year's worth of happenings in the Conch Republic. 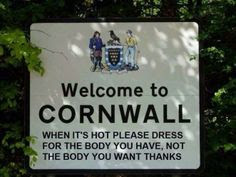 The above sign has made the rounds on Facebook, but I first saw it here, on a blog based in the English county of Cornwall. One of the things I don't much like about Fantasy Fest is that observers seek eroticism and find a bunch of elderly out-of-shape naturists parading around Duval Street and those people take this badly. I won't strip in public thanks, but I admire the fortitude, or perhaps the lack of self awareness of those that do, especially when they aren't erotic in the flesh. I still like the sign though, as undemocratic as it may be...
My own week has started out odd, by my standards. I spent the weekend in bed nurturing a horrendous head cold brought on I believe by stress. My life is stressful at the moment, I'm testing the prototype of 911buddy and it works but we need a few bugs sorted out before it goes on sale next month. I am training a new dispatcher at work and he is good so my expectations are high and I have to work hard to keep him interested. Traffic on Highway One is packed with party goers. I'm grumpy. I need a change of  attitude.

So I come out of the house and there's this guy ambling out of a house across the street, a house with bunches of odd people coming and going all year round. They show up in loud  cars, some appear to live in their vehicles, its a constant round of humanity though they do keep to themselves and don't make noise or anything. He took the biscuit in the oddness stakes carrying what appeared to be his worldly possessions ( or someone else's ) on his back in a pillowcase. I'm buggered if I know what that was about. Fantasy Fest related or just a bit odd generally..thrown out perhaps by those less odd than himself?  Who knows. 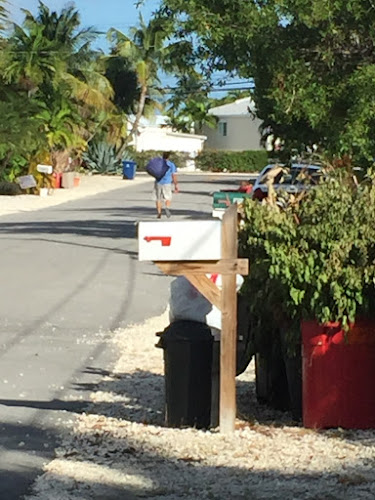 Then we had the shooting of the Sheriff's Deputy on a traffic stop, hit in the chest at point blank range and given a huge bruise only, thanks to his impact vest. The manhunt that followed was a nightmare and I was glad not to be working. The photograph below is from the Key West Citizen as police surrounded a house where a suspect was holed up. If we had this kind of crap every day as some big cities do, there is no way I would be a dispatcher. As it is I am sick and tired of guns and shootings. Freedom for me is measured in different terms, perhaps the ability to live alongside strangers without the need for an arsenal. I anticipate no change in gun laws, I plan not to give a toss about them and presume that somebody other than me will be the next victim of the next inevitable shooting. That my wife works with the deputy's wife is just a measure of how small this community is. 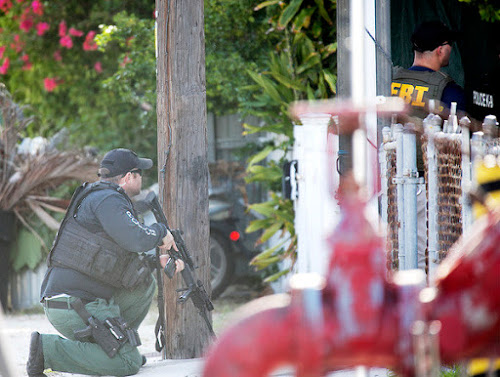 Given a choice I'd rather look at nude people, which you can do as well on Duval Street webcams. Do you feel the need to see this? It's yours for the viewing: 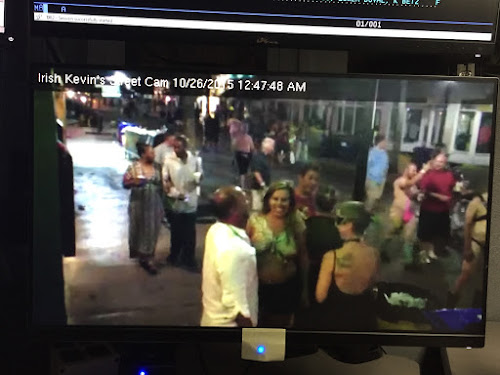 I was on Big Pine yesterday filling up the car with gas after walking Cheyenne and minding my own business when this stranger strode up to me waving a gas can at me and barking: "How do you open this?" over and over again. I looked around but it was definitely me she had mistaken for a gas can opening expert and she thrust it into my chest. "Good morning," I said "You're pretty single minded aren't you?" and she stared at me. It took a small twist to release the cap and she strode away. I finished filling my car, reminded once again why people piss me off. Thanks again she said as I prepared to leave...again? I asked myself - how can you thank me again if you never did in the first place?  What happened to manners while I was growing old? 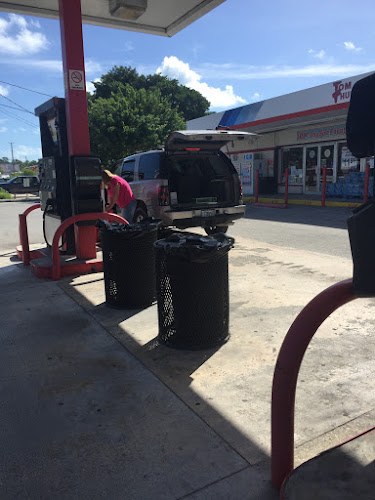 The calls at work have started already and I had one drunk young woman insult me for being a foreigner when I couldn't help her. "Don't talk to him,"she said dismissively to someone in her party before she disconnected. "He's got a British accent."Like he was too stupid to get her point. I explained to my startled trainee that people tend to be rude when under stress or drunk and picking on immigrants is open season with Trump running for office.  Then there was the woman who had just arrived "...on island," like the Shah of Iran and his entourage descending on Contadora. Did she take a ferry from Marathon? I wanted to ask her Importantness because this island is actually a peninsula. She was staying at a hotel on Duval and the Zombie Bike Ride had blocked her way. What was she to do? Park and walk I said trying not to sound like I was talking to a person not qualified to operate heavy machinery. Why do I still get surprised that people treat the police as an information bureau? There was the best call so far this Fantasy Fest when some drunk called to say his cab driver robbed him. The cab drove away with his money. I intervened and asked my trainee to find out how much money was involved. One twenty five he said. A hundred and twenty five bucks? I was surprised at the large amount. No a buck twenty five cents the drunk corrected me. The cab driver got mad when he didn't tip him and drove off with his change. You want an officer for a whole dollar and twenty five cents I asked packing my voice with as much incredulity as I could. We agreed it wasn't worth it after the drunk pondered ponderously the waste of time he was incurring all round to locate him, investigate cab companies and find proof that indeed some long suffering cab driver had had the gall to purloin the price of a very small Cuban coffee. I saved the taxpayers at least a little wasted police time with some mutual head scratching with the drunk. At least no one got shot on my shift and for that I was profoundly grateful. I went home happy to my dog who, like me, does not care for crowds. 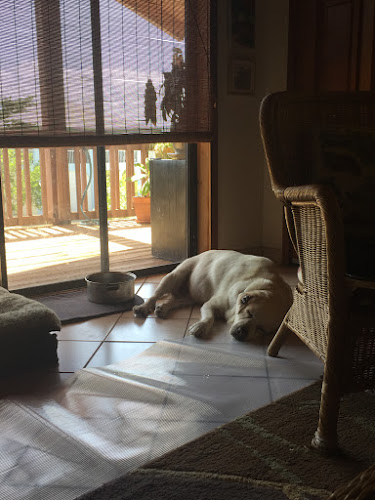 Yeah. Fantasy Fest sucks. It would be great if it wasn't for the people.