I had taken the time to memorize the route to Niagara, which isn't as hard as it sounds. To leave the Keys to go North you take the Florida Turnpike in Homestead and switch to I-95  at Vero Beach. The Turnpike turns northwest to Orlando and Ocala where it joins I-75 to Atlanta. I-95 notoriously goes up the East Coast to Maine. So for me I was on familiar ground all the way to I-26 at Charleston where you trun inland for Asheville where my sister in law lives. At Columbia you take I-77 to Charlotte, Fancy Gap and Wytheville Virgini. So I didn't really need the mapping on the Iron Butt. Home and fresh: 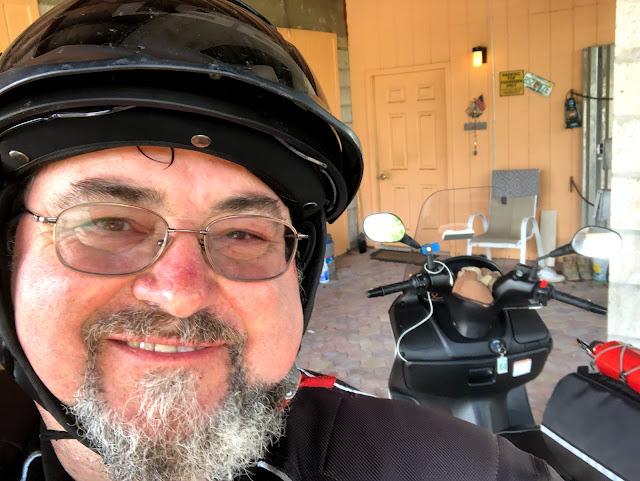 Vero Beach. The Iron Btt doesn't encourage good photography. You stop get gas zero out the A trip and get back on and keep going. They says the time spent stationary kills your average. With 200cc I couldn't afford dawdling. 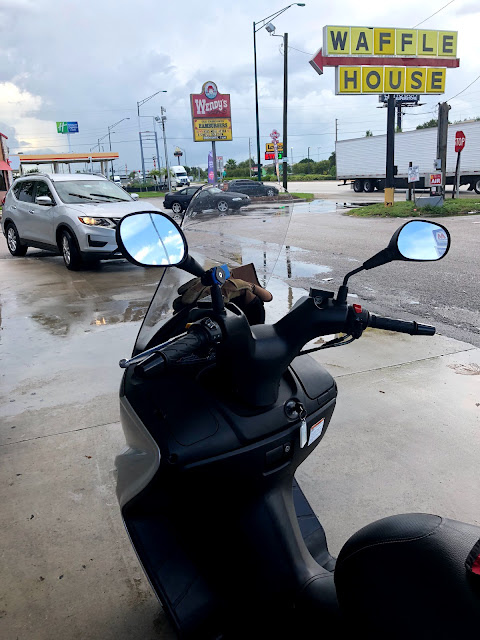 The scooter ran perfectly, and all speed will given as GPS, as the speedometer though quite accurate over reads by 5mph when indicating 80 mph. Along I-95 I was running between 65 and 70 mph  with the tachometer on 8500 rpm about a thousand below red line. Fuel consumption dropped from 180 miles from the 2.8 gallon tank on my commute to around 150 safe miles. The fuel gauge is accurate and helpful and when it gets down to the last bar you can still do thirty miles befroe the bar started flashing and then you start puckering if you dont know where the next gas station is... 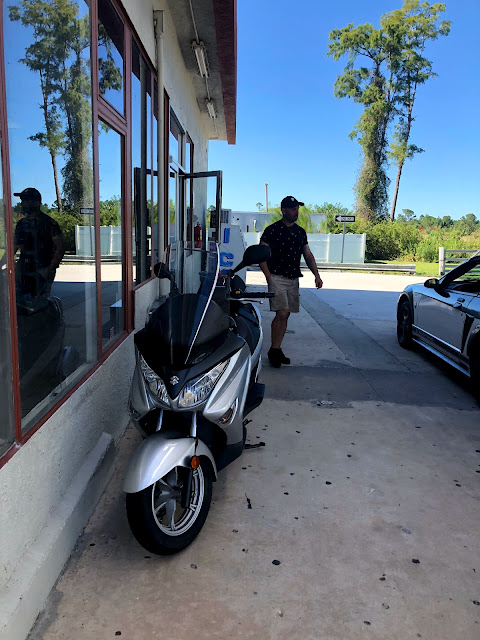 I thought I had done a brilliant job of avoiding rain by leaving mid morning. The afternoon storms were pounding Central Florida and though my freeway was wet I was going great. Then the rain started a few miles from Georgia. Stop. ON with Frogg Toggs over my mesh jacket. Thank God for waterproof boots and keep riding. 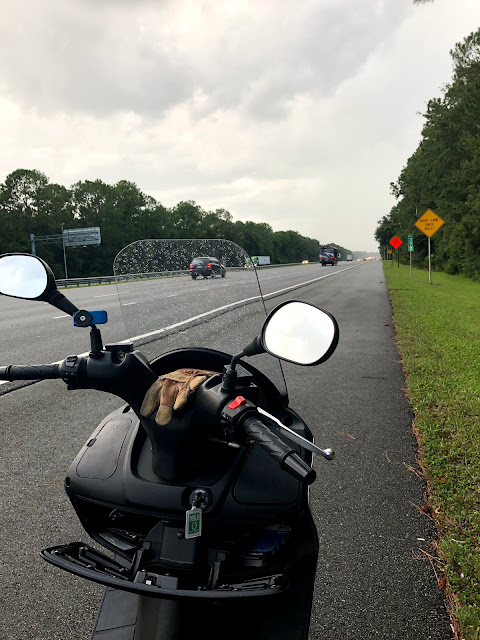 At  the Georgia gas station at exit 6 the civilians made a few cheerful remarks about rain and riding  and I replied cheerfully something about being tough to be stupid. It was a nice little boost as was the orange monster and egg salad sandwich I ate at a table waiting for the rain to ease. 500 miles and not yet dark, in ten hours or so. 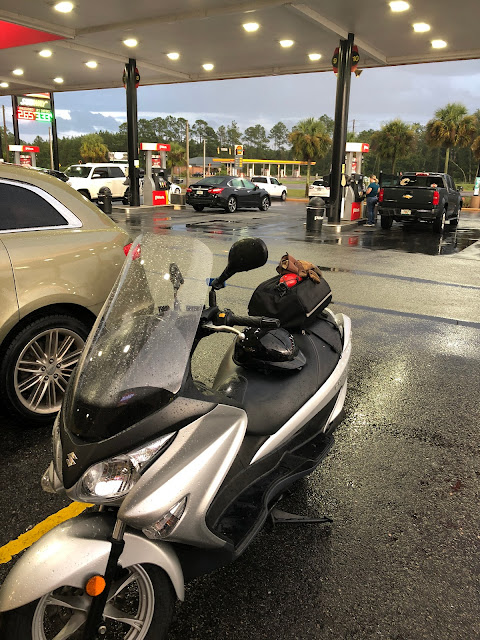 I had used up my freshness crossing Florida  and now our  60 year old hero is tsrating not only to lose his ears but to show signs of wear. 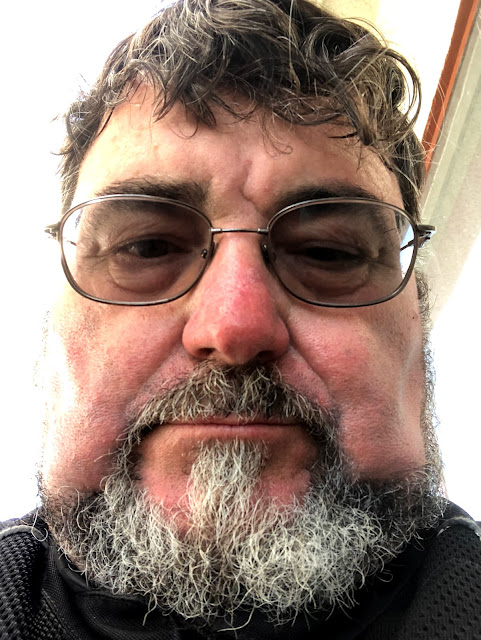 The idea was to cross the plains of Georgia and South Carolina and North Carolina in the dark and arrive at the top of Fancy Gap and Wytheville Virginia at dawn. It seemed ambitious, a thousand miles in 20 hours... and me getting tired. 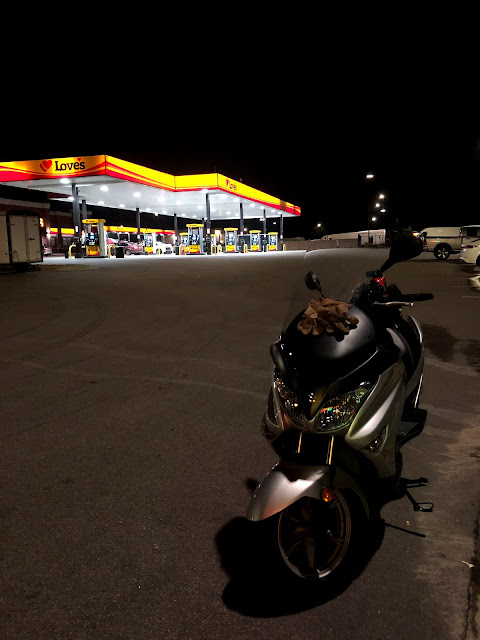 This was where the ride turned to shit, not to put too fine a point on it. The heavens opened and I found myself riding through the woods of Georgia and  South Carolina in pitch darkness with what my fiend Eric describes as a toad strangler dumping quantities of rain. The surface was worn out, the striping also and I had droplets all over my visor. As I slowed down the Eco light shone a bright green on the dash to advise me of what a good job I was doing saving gas. Si I sped up a bit to restore minimal vision and every time I slowed down the water droplets in front of my face went a bright bilious green I nearly gave up and looked for a motel. I was genuinely scared but what kept me going was the respectful distance the cars kept from me and I never felt likely to get run over. I would be very grateful if South Carolina could see its way to spending more money on the roads. 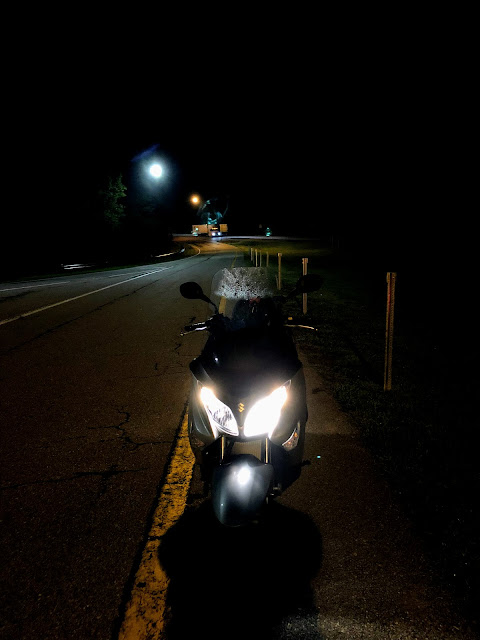 I pressed on i the night, turning onto I-77 from I-26  and by passing Columbia the capital of South Carolina. I was stopping for gas about every two hours, about 130 miles and riding on one buttock and then the other other. At the Columbia gas station Trip B told me I had covered 767 miles from my home/ Iron Butt doesn't accept instrument mileages but it was comforting for me to know I had done it in about 14 hours. I pressed on in drying conditions.and started climbing. I like heat and as temperatures dropped to 65 I was not excited.I pressed on glad to see the mild hills didn't phase the Burgman. I was still doing 65 mph trying not to drift down or up as exhaustion overtook me. 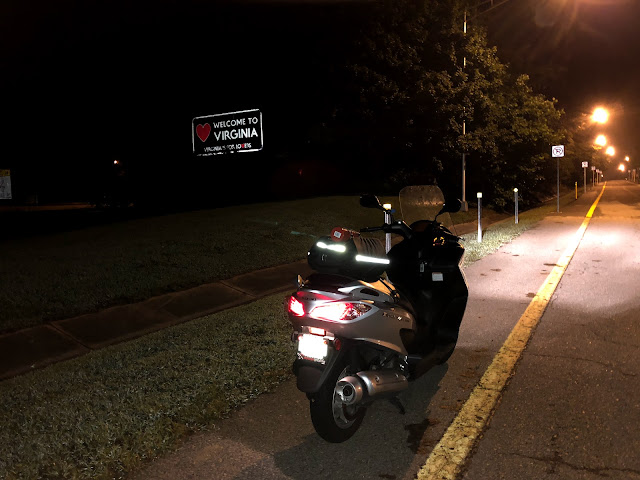 At the Virginia State line my eyelids opened and the crushing need to sleep left me, once and for all. Once again I had contemplated abandoning I-77 in all the miles of roadworks around Charlotte and I fought through my exhaustion. During the day Charlotte always looks like a parking lot on it's freeways and one reason I left when I did was to go through here at 3 am. Brilliant. 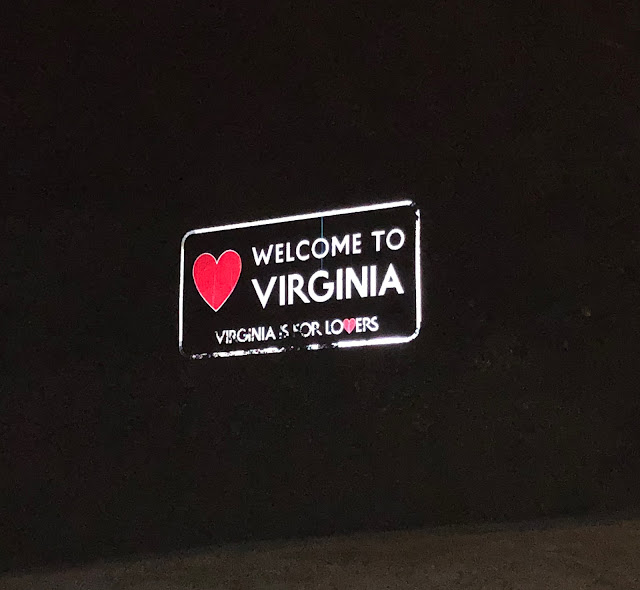 The Virginia State Line is at the bottom on he escarpment that climbs to the plateau that leads to Fort Chiswell and the intersection of I-77 (north west bound more or less) and I -81 (north east bound through Virginia). Fancy Gap was a big test for the Burgman a series of long grades that test the brakes on 18 wheelers and kept my little scooter down around a full 60 mph. A couple of 18 wheelers passed me (!) but not one single car.I was astonished. There was a message at the top saying back ups could be expected in the tunnels to West Virginia for roadworks but I figured at 7 am on a Sunday it would be fine and so it was. When I stopped at Wytheville to call home and enjoy the dawn that banished my droopy eyelids I did some quick calculations. I had done 1,000 miles almost exactly from home in 20 hours. I had 500 left to do in 16 hours. Suddenly the Bun Burner looked doable. Color me astonished. 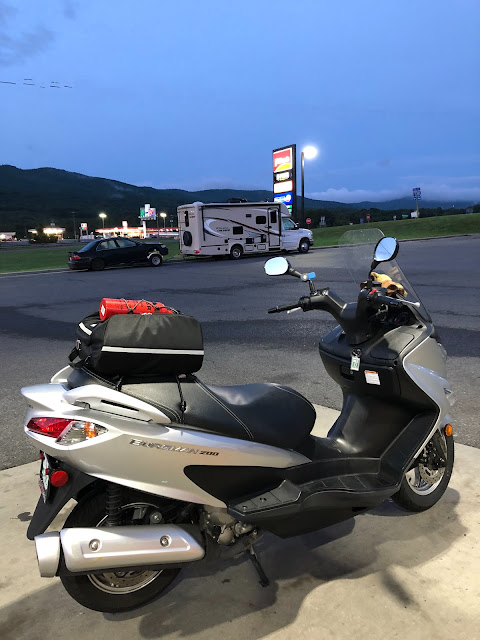 Everything was in perfect working order. All I had to do was keep on keeping on. Easier said than done through the wild roller coaster ride of West Virginia mountains ahead.

The sun never appeared at first, wisps of fog hung low and the road was wet though it only started raining later. I had to use a sling shot technique to get up the slopes as fast as possible, downhill at 75 mph and on the reverse slope watching the speedometer drop back to 60 mph, 55 on pretty steep hills and 50 on the really long ones.  I had to use the downhill to stay ahead of the trucks who seemed less than thrilled to be passed by a Hobbit on a moped but I was having fun in my own weird way. 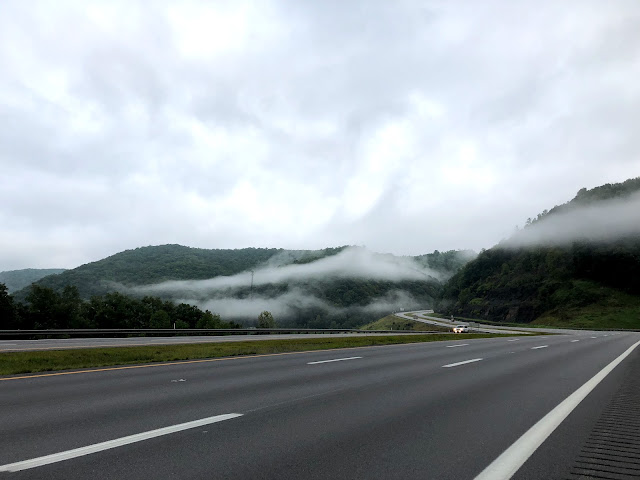 At Beckley I took US Highway 19 and per instructions from an ADVRider inmate I stayed close to the speed limit letting the locals go ahead and make way for me. MY wife hates tickets as she views them as a waste of money ad she likes my Burgman because she thinks its slower than the Triumph. Which it is but its a damned sight more comfortable which allows more consistent saddle time. 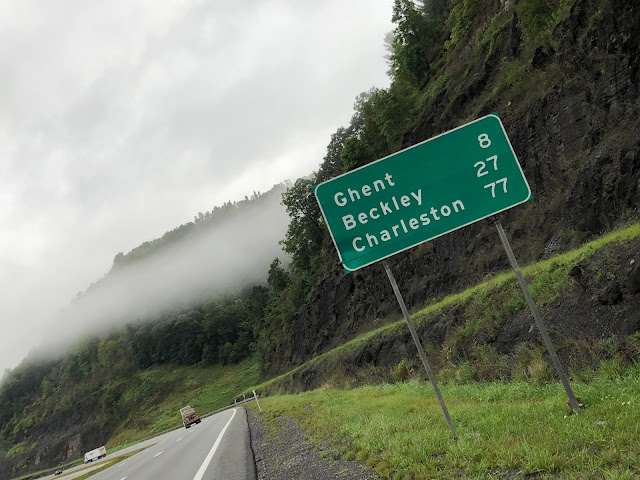 I was clearly no longer in Florida. In 24 hours I had covered 1200 miles. Twelve more hours to go and only 300 miles to do. Piece of cake I thought and started to relax. 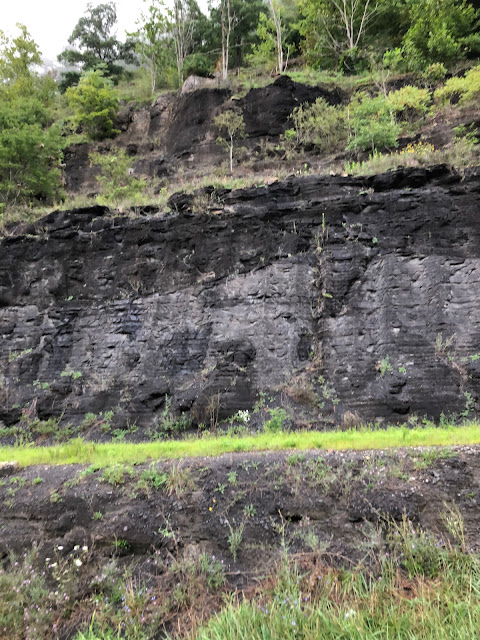 Yeah then the rain started up again. so I put the Frogg Toggs back on and kept pressing on. 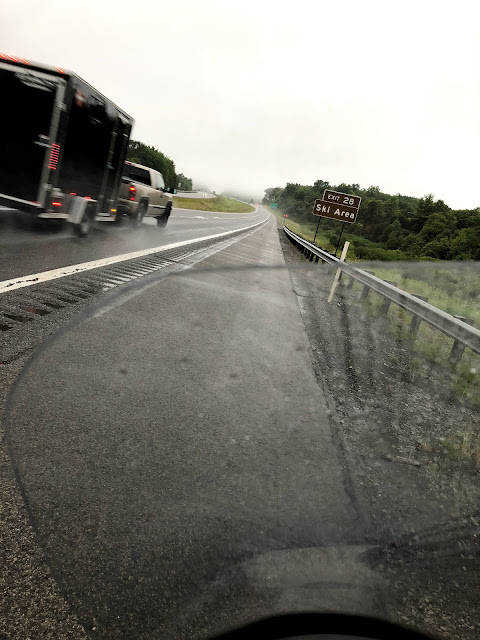 I hit a massive pot hole which managed to pop open a little cubby hole where I kept my EZ Pass which flew out and the baffles on my muffler shattered leaving me riding a scooter sounding like it was trying to be a Harley. Very annoying. The wheel rims and tires were fine luckily and I retrieved the EZ Pass intact dodging between cars and so all was well. I kept on keeping on. 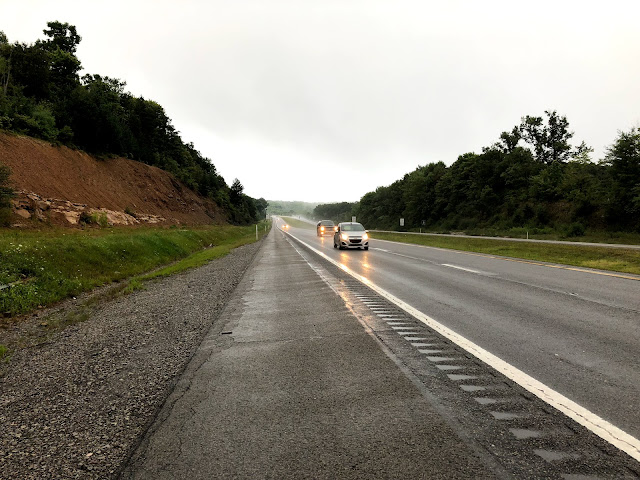 Eventually the sun came out and I stopped for a few minutes to enjoy the view. And the silence. The loud muffler really annoyed me as I hate noisy bikes. This was beautiful country and I got to see a lot of it at 55/60 mph. It occurred to me if I lived in Appalachia I'd probably need something larger to ride than a valiant Baby Burgman. A man likes  a little oomph from time to time. As a visitor I was having  a blast. 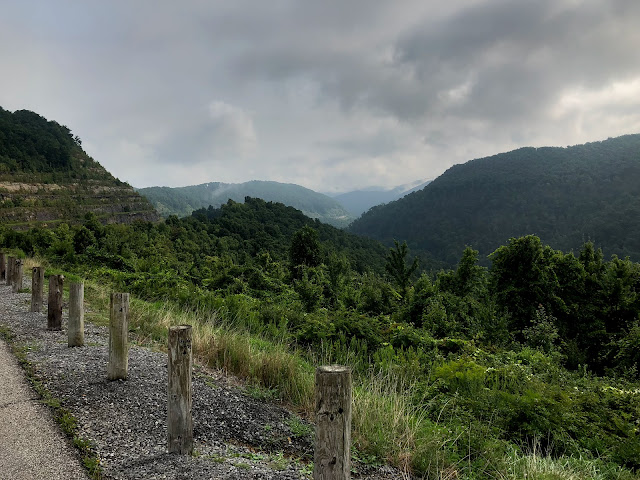 I got tired I will confess dodging rain and sun. I forgot to get gas and thanks to Google maps found a gas station where I put 2.6 gallons of 89 grade in a 2.8 tank. I realized I was functioning but barely when a nice man came into the Subway with my helmet and gloves which I had absentmindedly left on the pump. The sooner this ride was over the better. 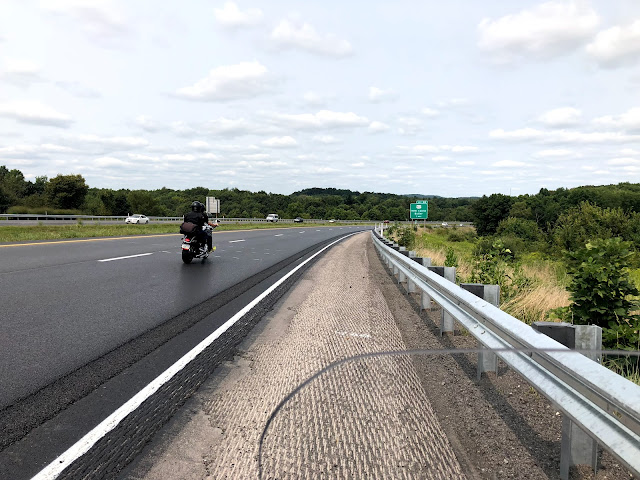 It devolved into an urban race with traffic along the shore of Lake Erie on the toll road. Pennsylvania and New York don't mark their state lines so at some point I crossed from one state to the other. I reached for my EZ Pass and it slipped through my gloved fingers to disappear forever in the road. I had failed to figure a way to secure it and my idea of holding it my hand, clearly a non starter failed. The Florida Sunpass comes with stickers so you can move it  easily from vehicle to vehicle. Oh well. I pressed on through some mysterious Google back road through Buffalo, passing heaps of rusting factories sitting incongruously next to lakeside parks packed with people on a Sunday evening. 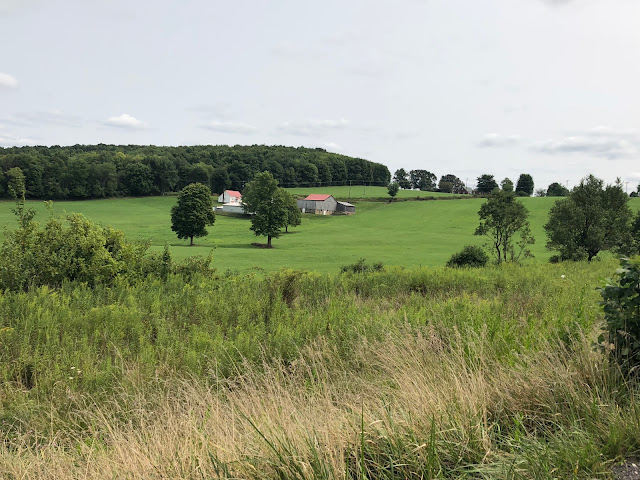 I Just kept riding, no pictures ( I think this one below is from the last gas station in West Virginia) and took no pictures. 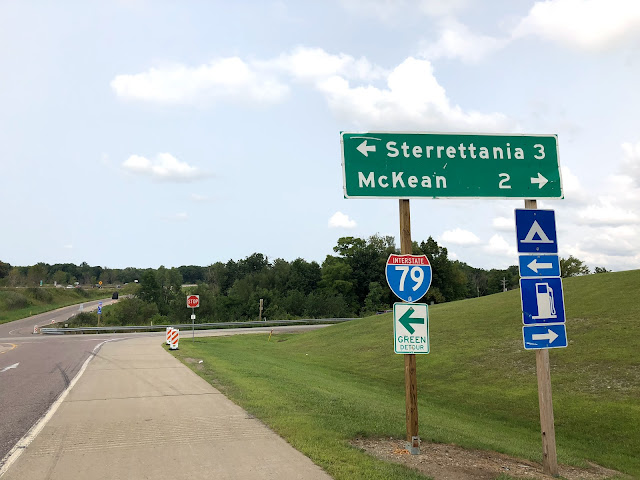 The clerk at the Motel 6 witnessed my arrival and gave me a receipt showing the ride took 32 hours. 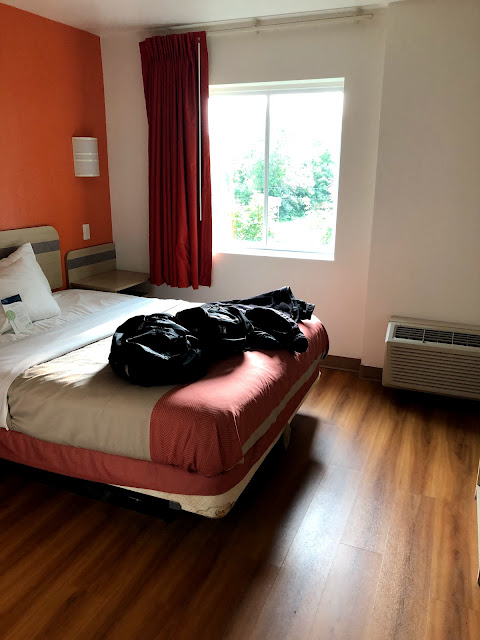 My emotions were a strange mixture of elation doing what I thought was impossible and at the same time I was alone with a box of Popeye's chicken my first hot food in two days, white walls and utter exhaustion for company. 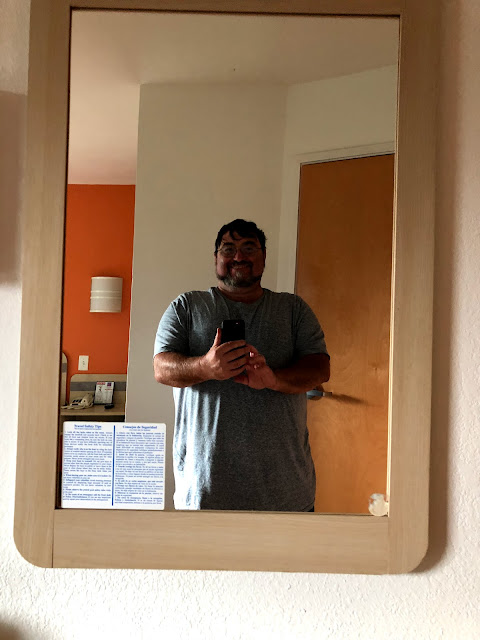 I passed out.
Posted by Conchscooter at 12:00 AM 6 comments: