It was apparent our trip was coming to an end as we were turned toward home at last, first east then south. As we left Birmingham we promptly got stuck in a monstrous traffic jam on the freeway into Atlanta though it was mostly idiots pausing to stare at some poor unfortunate who wrecked, thus holding us all up. Eventually the I-20 parking lot released it's grip and we rolled into the city, home to Coca Cola and CNN. I must say every time I get stuck I traffic I appreciate a water cooled engine and an air conditioning cooled interior as we sit and watch motorcyclists stuck in line unable to lane split to get ahead. 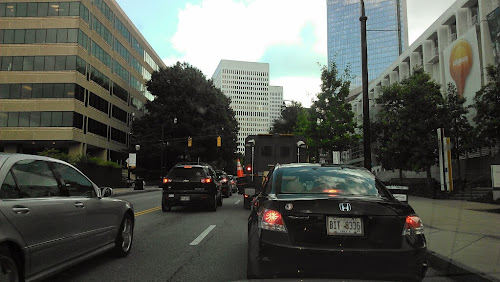 Atlanta is Atlanta and you either like big cities or you don't. I love the HOV lane on I-75 through the city, as it also allows motorcycles and it cuts down the log jam of traffic. I've visited Atlanta and its suburbs in a previous life, a friend lived in a brick house in a leafy suburban street and I got a tour of the city. It is everything a city should be and if you like that sort of thing it will do nicely I'm sure, modern and sophisticated and full of energy. My wife and I had a goal which was annoying while we were stuck in traffic but I got my wife to the classroom with twenty minutes to spare. Her iPhone GPS and my driving- a fearsome urban combination! 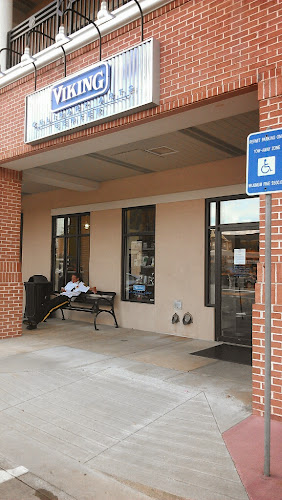 The Viking school is an offshoot of a corporation that makes kitchen equipment apparently and they have schools all over the place. We actually got the idea from a travel magazine and my wife was very enthusiastic so this stop in Atlanta was our final goal. I dropped her off and being as how I am the bottle washer in our family, and kitchen ant killer, Cheyenne and I buggered off to find dinner and the La Quinta which my phone said was twenty minutes away. Far by Key West standards, close in Atlanta, a city where even cyclists apparently wait patiently (and insanely) in line... 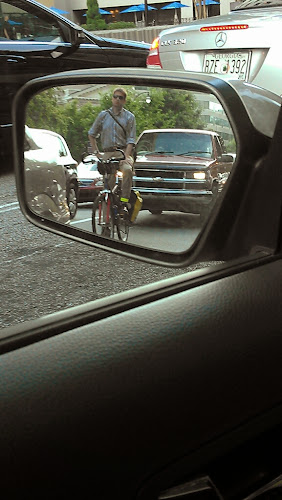 The traffic jam had one good outcome. While stopped I got a text message asking if I was interested in overtime...anyway we got into conversation among the night dispatchers and when he learned where I was, Fred who knows everything gastronomical, had a dinner suggestion. He claimed they had the best chicken and pancakes in the South....so when my phone told me they were but ten minutes away what could I do? 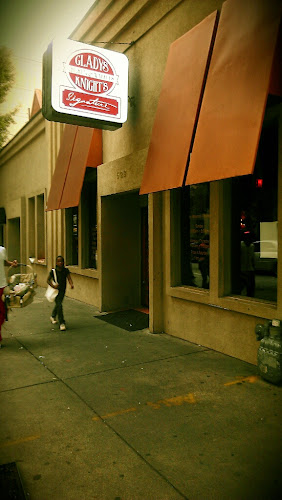 Gladys Knight & Ron's Chicken and Waffles Restaurant Downtown Atlanta Famous Southern Soul Food Restaurant Open Late is quite a mouthful, but this stop filled a cultural void for me. I'd never heard of the soul singer and certainly I had no idea she liked chicken and waffles, the relatively new food fad. Many others apparently have heard of the place and they lined up to get in. Cheyenne ended up in the line of photography fire. 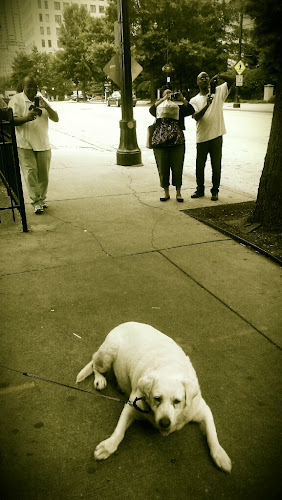 I don't know if I was there early or what but there was no line to speak of and they promised my food in ten minutes, which gave me time to walk Cheyenne round the block. Apparently at popular times the wait can last two hours, and call me shallow but I think that's insane to wait for food that long. 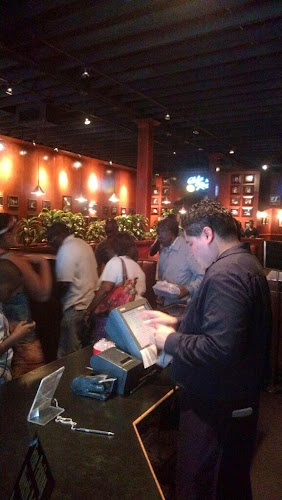 The food was fine but there's only so much you can do with the ingredients. I once suggested to my wife we make chicken and waffles my way, my first culinary suggestion to my wife who likes to cook. I said lets buy some Dions chicken and get some frozen waffles as a) we don't have a waffle maker and b) waffles are pretty much waffles outside of Belgium (I guess). And you know what? They didn't taste like these chicken wings fried in cornmeal (I think that's what they were), but we did fine with "my" waffles and chicken at home in the Keys. The hunt, as in so many things, was the fun in Atlanta and I enjoyed tracking the place down. My other alternative was a solo dinner with a sandwich from Publix next to the hotel. 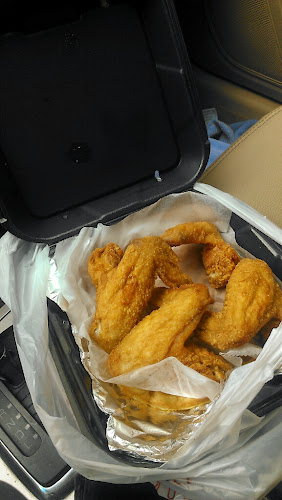 I don't habitually travel with a weapon, who does? And my pants weren't sagging so food pick up went uneventfully. The parking instructions were too complicated for me so I parked on the street. 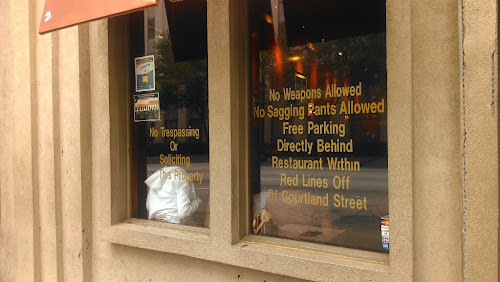 For Cheyenne dinner was just another opportunity to check out the scene which she did. 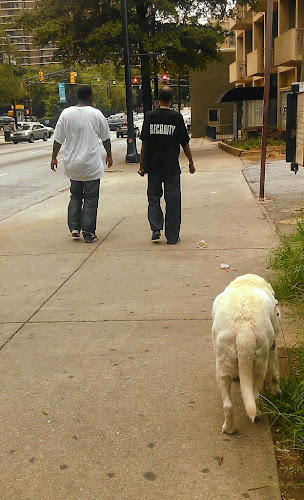 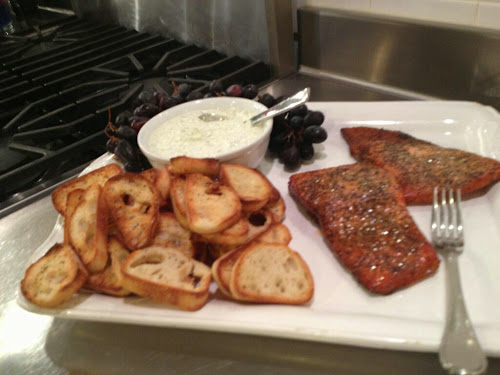 She sent me this picture remarking how some husbands were attending class with their wives. Hmm, I know I don't have the patience to cook but I do enjoy washing up. 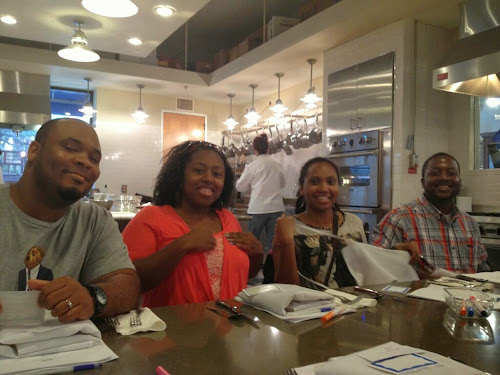 Apparently the class was worth it. Of course the food was not allowed to leave the premises, liability or one of those obscure corporate lines of reasoning, so we can only guess how the students did. It looked pretty good to me and she enjoyed it while she learned some tricks new to her. 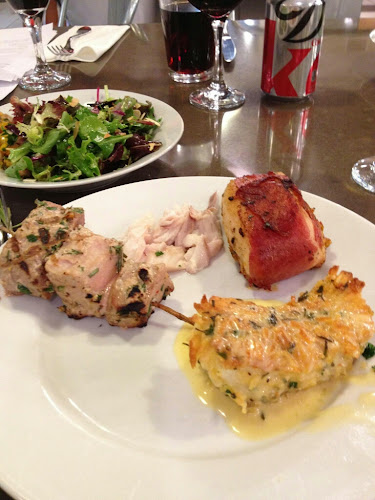 A stray Atlanta cat. Not impressed by Cheyenne. I wish I had a home for every animal. 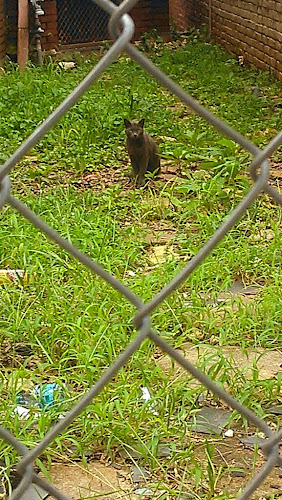 But this is the only one I get to torture this time around. She was ready to be done with the car. 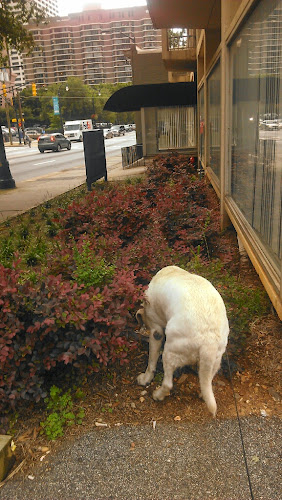 We got home close to midnight, driving the Keys when all the good tourists were tucked up in bars drinking, or in bed asleep, leaving Ighway One wide open. It was a thirteen hour day but well worth it to avoid the weekend jams on the only reading the Keys. A fitting end to an excellent road trip.