Moisture laden air is not unknown in the Florida Keys though usually we see it as oxidation on metal surfaces as salt air eats everything in sight. Every now and again we see actual fog, and when I out the word fog into the search function at the top of this page I got back half a dozen photo essays on the subject dating back to 2008. Like this one: Fog 2011  I got some rather decent photos I think, though I say so myself on my half a mega pixel android phone. I mention all this because fog has descended once again onto the Keys to the usual chorus of shock horror  and "this never happens here!" 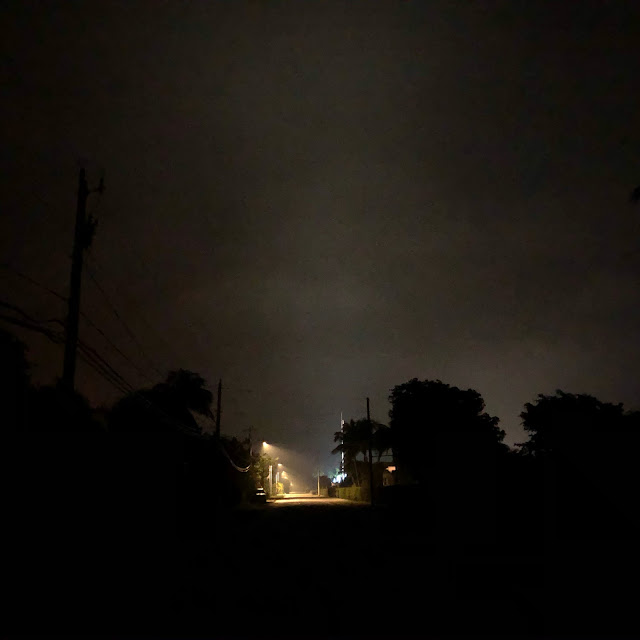 It was warm yesterday morning and humid when I stepped out of the house at four in the morning to "check the mail" with Rusty. On my work days he likes to walk to the end of the street and poke around where the dogs from Venture Out trailer park have been walked the previous day. It is a lovely peaceful start to the day after the jangling of the alarm clock has been forgotten. Spanish Main is a major side street a mile long pointing due north at Highway One in the distance. Turn left and it's 23 miles to Key West and  turn right to drive 27 miles west  to Marathon. My decision to pull over at the Sugarloaf Lodge (Mile Marker 17) was prompted by the fact that fog was still hanging around and I hoped for some atmospheric pictures in the low light conditions at the lodge, a pool of street lights on a darkened highway. 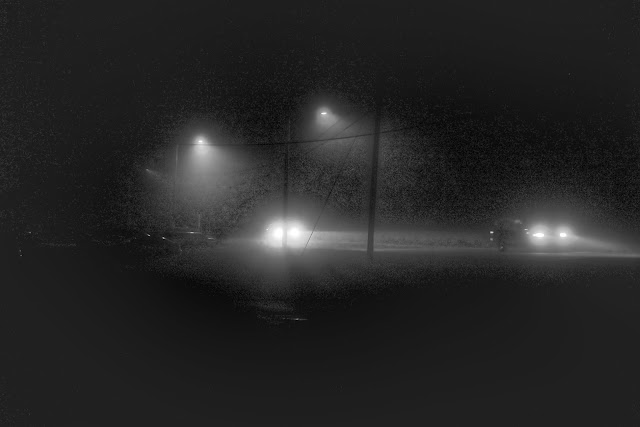 This one below I liked as it looked like a film set, moisture laden air swirling under exotic palm fronds....Yes I know it's just the marina at Sugarloaf but I did allow myself to use my imagination just a bit. There was a vacancy at the lodge but I had to be at work in 40 minutes and I wanted to stop on North Roosevelt and get a few more pictures of the fog in the city. That never happened. I got stuck behind a long line of cars that decided they were unable to manage the hairy driving conditions and we crawled across the mangroves at a stately 45 miles per hour which put my arival time at the police station dead on ten to six when I like to be sitting down already.  I barely had time to put the kettle on before I took over from night shift. 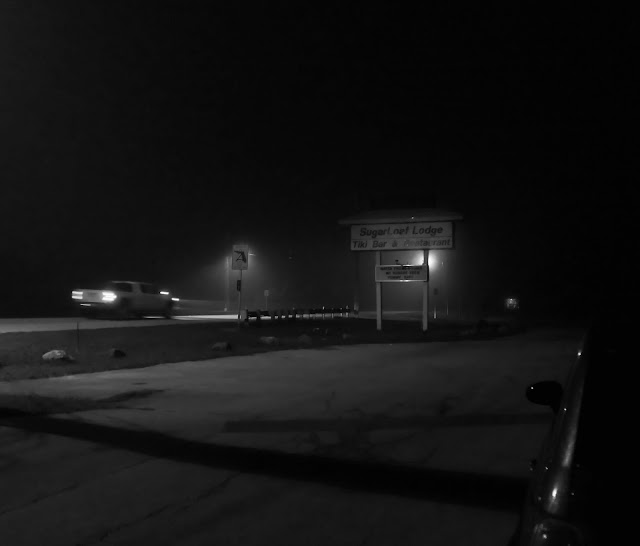 Well I suppose that's all the fog excitement we shall see for the next year or two in the keys. That being the case I might not see it again, so I'm glad I stopped when I did. It was all gone by the time the sun came up around 6:30 and I had my first cup of tea.
Posted by Conchscooter at 12:00 AM 2 comments: