The new sexton's  building at the cemetery is coming along in spanking style. Doric Columns support a roof projecting over an impressive entrance. Never did the cemetery known such elegance in years past. 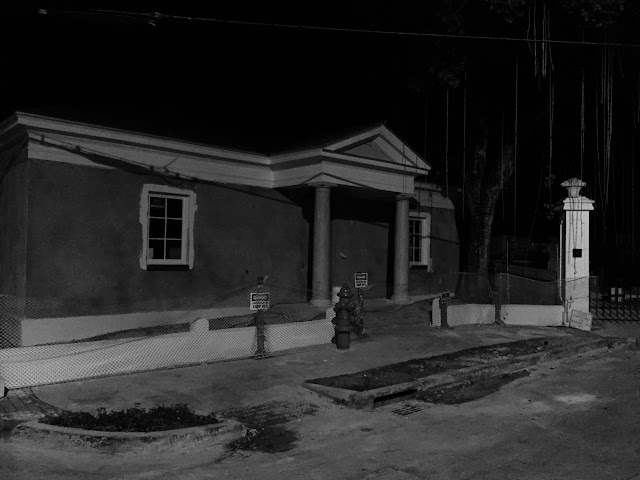 Across the street Carolyn Gorton Fuller's house is still protected by her mirror wall.  The Citizen still has her particular obituary available for those who want to know more about that home on Angela:
Carolyn Gorton Fuller, aka "the Bottle Wall Lady," passed away peacefully in her home at 905 Angela St. on Saturday, Aug. 7, 2010. She was born on Dec. 31, 1921, in Utica, N.Y., and grew up in Miami, Fla. Carolyn traveled extensively as a child, spending six months traveling with her family in Europe when she was a teenager. As an adult, she led multiple group tours to Europe, lecturing on art history, and spent a year in India just before settling in 1967 in Key West, where she became a long-standing member of the arts community.
Carolyn graduated from Syracuse University in 1944 with a BFA in painting and earned her MFA in painting and sculpture from the University of Oregon in 1949. Her works are included in collections and museums across the country. 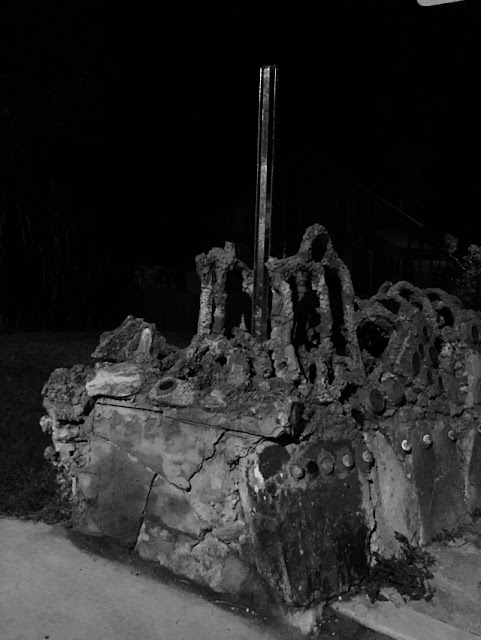 Bottle wall made artist a Key West icon
BY MANDY MILES Citizen Staff
mmiles@keysnews.com
Carolyn Fuller dismantled her legendary bottle wall on Angela Street more than 15 years ago, and replaced the colored jars with small mirrors, yet the "Bottle Wall Lady" moniker persisted until Fuller's death on Saturday at the age of 88.
The corner house at 905 Angela St., across from the Key West Cemetery, and the handmade wall that surrounds it is one of the most photographed properties in Key West, while the woman who lived inside the plain-looking structure remained somewhat of a mystery to peering passersby.
"She was a recluse, but she was a wonderfully creative person," said Wendy Coles, who spent a great deal of time with Fuller over the past five years.

Fuller, one of the first women to earn a master's degree from Syracuse University, bought her house in 1964 and spent summers in it until her daughter, Becca, graduated from high school in 1969. At that point, Fuller made Key West her permanent island home.
The home's location next to the cemetery was prone to flooding, and Fuller's property became an island itself after heavy rains, prompting pedestrians to trudge across her porch and peer inside her windows while trying to avoid the floodwaters.
"I planted a hedge that they knocked down, so I decided to build something they couldn't knock down," Fuller told The Citizen in 2005.
A painter and sculptor by trade and education, Fuller found inspiration in an old mustard jar.
"I thought I could clean the jars and seal them, and here was the making of a wall," she said, recalling how the neighborhood children became eager collectors of bottles they brought to an appreciative Fuller.
She used mortar mix to cement the colorful bottles together, creating a 5-foot-tall wall around the corner of her property.
The tight corner off Windsor Lane was tough on the bottle wall, and errant vehicles regularly damaged parts of it until 1992, when Fuller, tired of mending the fence and cleaning up broken glass, decided to dismantle it.
It did not take long for pedestrians to once again cross her porch, so Fuller found a use for the small, round mirrors that are scraps from Monroe Glass. The reflective circles are the result of holes cut in mirrors for bathroom fixtures.

She embedded the mirrors into the mortar and added delicate arches on top until the mirror wall was born.
Fuller, with a floppy sun hat, was a familiar sight in her neighborhood, and at the bar at Pepe's Cafe, where she enjoyed a frequent martini, her daughter said.
She was a regular at the Key West branch library on Fleming Street, and a skilled bridge player, Becca Fuller said.
"But everything was black and white with my mom, so she'd get mad at one bridge group and say she was never going back," Becca Fuller said. "But then she'd eventually go back."
There was no television in Fuller's house, and Becca remembers clearly when her mother dismissed it.
" 'I've never liked TV,' she'd say," Becca recalled. "'I've never liked it since they just kept showing that JFK assassination.' "
Nevertheless, world events fascinated Fuller, who realized after 9/11 that she knew nothing about Islam.
"So she read the whole Quran and then read the whole Bible, and then decided it was all poppycock," Becca Fuller said.
The family plans to keep the property -- and the wall -- intact, though they likely will move some of the sculptures that fill the hedge-shrouded yard, Becca Fuller said, thanking her mother's Key West friends, who became a life-support network in her final months.
Coles remembers swimming with Fuller every morning at 6 a.m., while local artist Rick Worth would play his guitar with Fuller, whose eyesight was failing.
She drove her white car around the island until a year ago, told her pastor when she hated his sermons, and filled her home with colorful works made from glass, paint or any other material.
"This woman was crazy, but in a really beautiful way," Coles said. 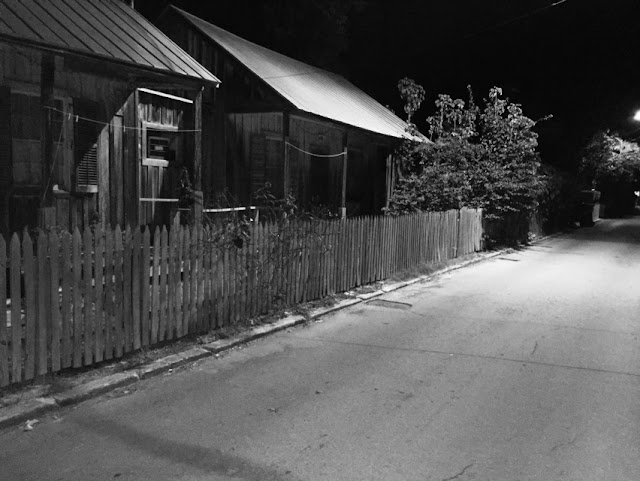 It's a lovely spot in the silence of the middle of the night. 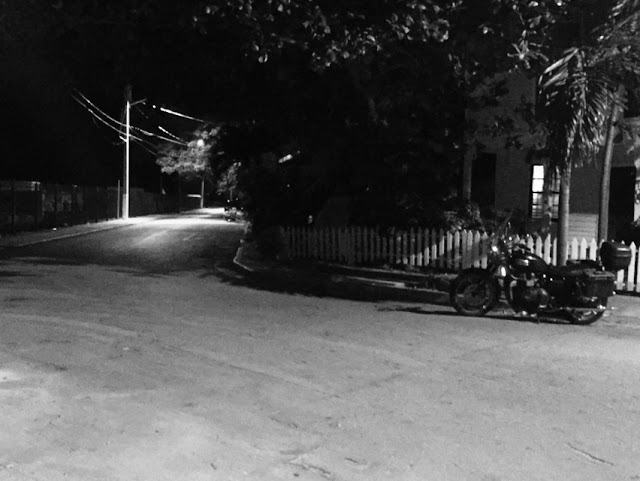 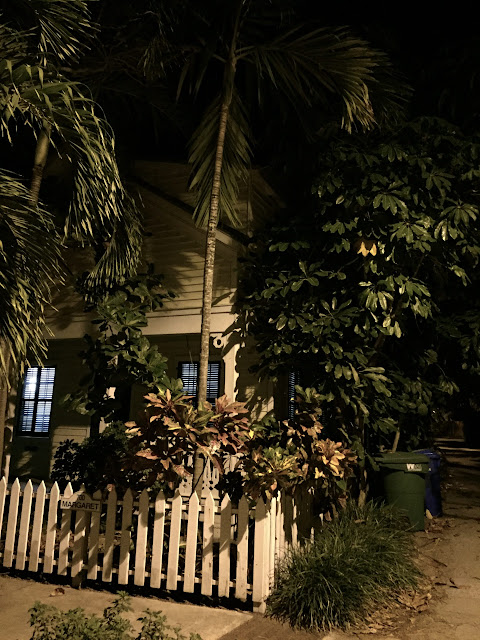 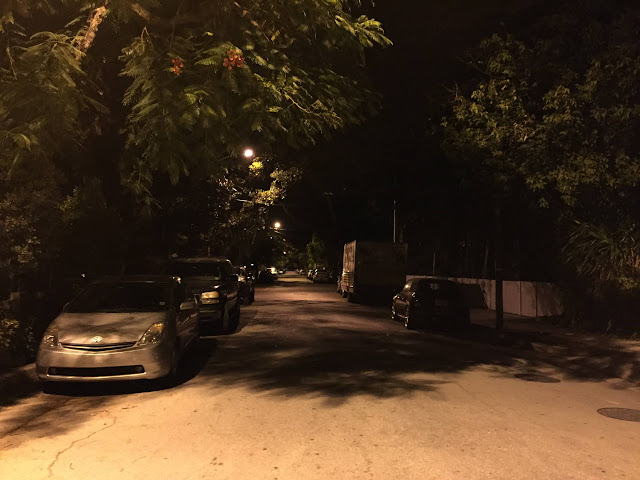