I was told there is this cool new gas station from Up North which is starting to penetrate Florida. I went to a Wawa when I rented an Indian motorcycle on the last day of last year and I found the sandwich okay and the lines inside daunting. While traveling through the Tampa area after visiting the Dali museum on Easter Saturday we decided to to let my critical gourmet wife make her own judgement. 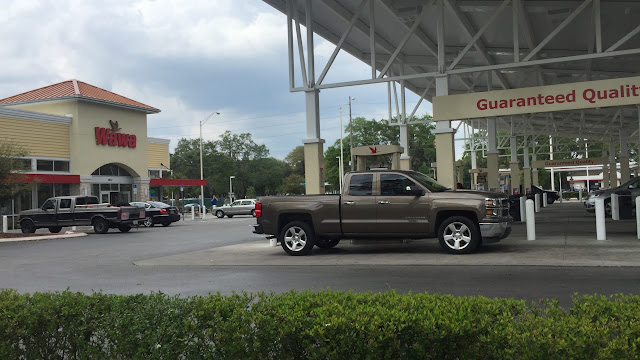 Wawa is a family enterprise from Pennsylvania and the rather absurd name comes from the village where the chain was founded, though why any English speaker would name their home town after the sound of the squawk of a newborn infant is beyond me. Be that as it may, Wawa has decided to enter the Florida market and they have got this far south so far as I can tell. Like Yuengling they are a prized institution in Pennsylvania and apparently they are to be appreciated now in the Sunshine State. Yuengling is my cheap beer of choice and I quite like it. Wawa is okay but not as special as people will tell you. 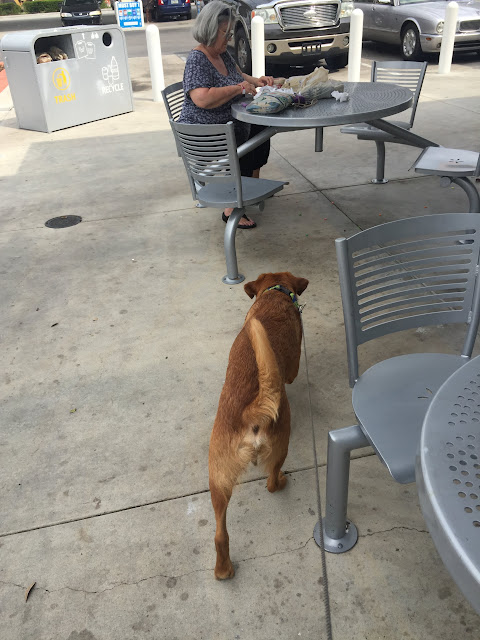 I walked Rusty to the place where my wife brought food and we sampled the hot menu. Philly cheese steak got a thumbs up with decent bread but the mac and cheese with sriracha poured over it was not satisfactory. The cheese was not flavored like cheddar and the thing was  glop in a plate. The potato soup was okay but not particularly flavorful. Had it been 50 degrees not 87 it might have done more for us. 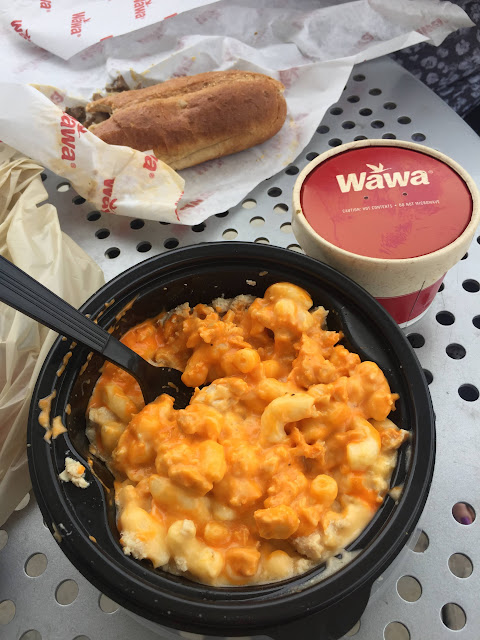 My wife said she liked the look of the fresh salads and we agreed that salad and a cold sandwich might be our go-to items for Wawa in future if looking for road food. We do that at Wendy's where they make a decent Asian salad and you can get a topping-free baked potato if you have a hankering for a spud. 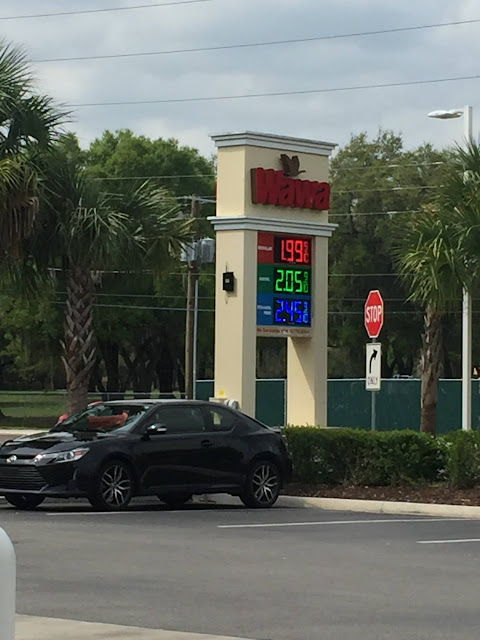 My mind still boggles at the sight of gas that costs less than two bucks a gallon. I fear the consequences of this inexplicable dive in the cost of energy but we have lives to live and filling up the car for twenty bucks seems a luxury in a world of increasing prices. Rusty just enjoyed watching the world go by. 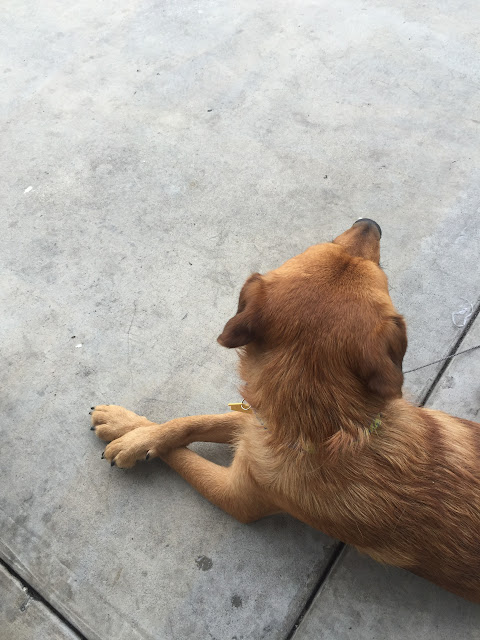 Wawa is an odd place. It reminds me partly of the Italian Autogrill freeway restaurants, fast food done well: 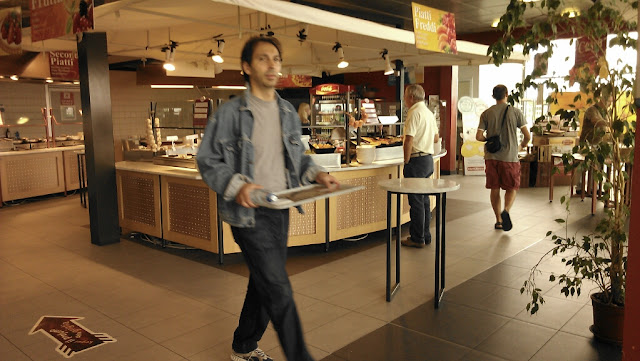 The man in black below is looking up the menu on a display and ordering his items through the touch screen. The workers behind the counter fill the order and bring it to you. 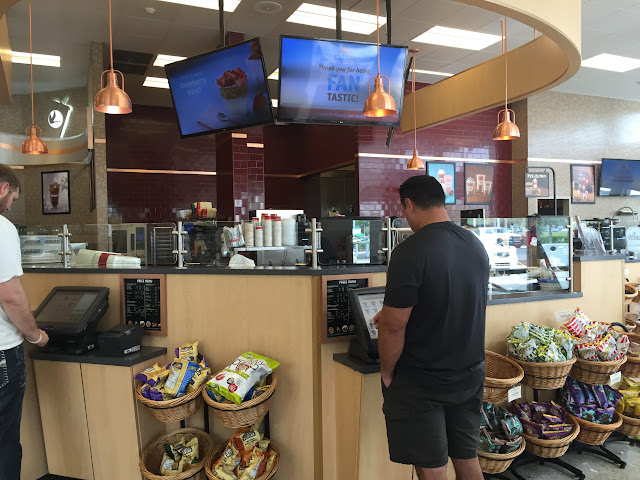 You select drinks and accessories, or pick up cold items from the displays. 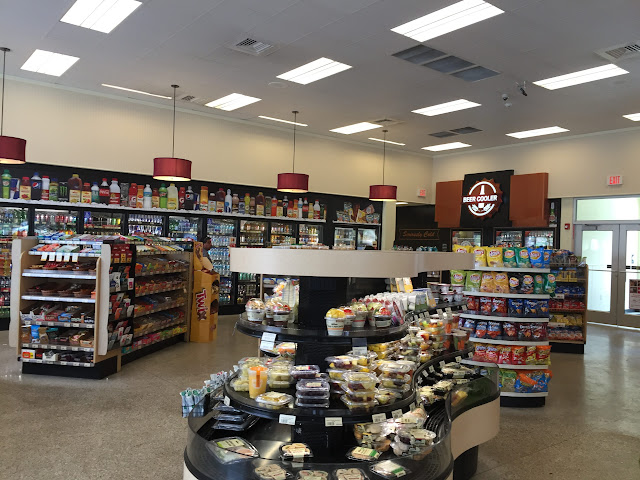 And go to the pick up window to pay and there you are. 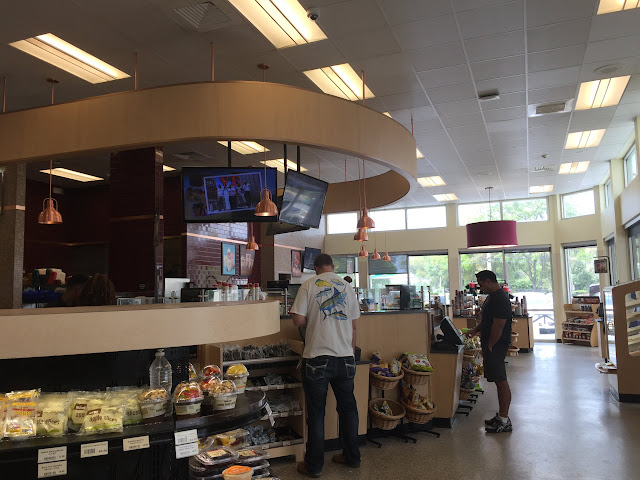 And copious quantities of alcohol are also available. One odd note is they don't carry a full line of sodas in cans so coke zero is only available in a bottle which I find less cold than when the fizzy sugar water is wrapped in aluminum. 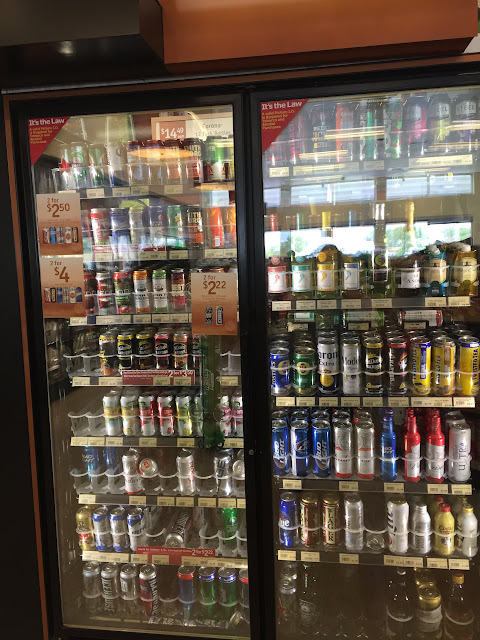 We cut across country driving state and federal highways across Florida. We have made it a point to see as much of the state as we can as we enjoy road trip so there weren't surprises in store for us along these roads. Having said that Robert Wilson introduced me to a new place to visit, this time in Lakeland, close by where we  passed: Frank Lloyd Wright For now I contented myself with photographing more typical Florida architecture which I labeled as Rusty and rusty houses on my Facebook page. 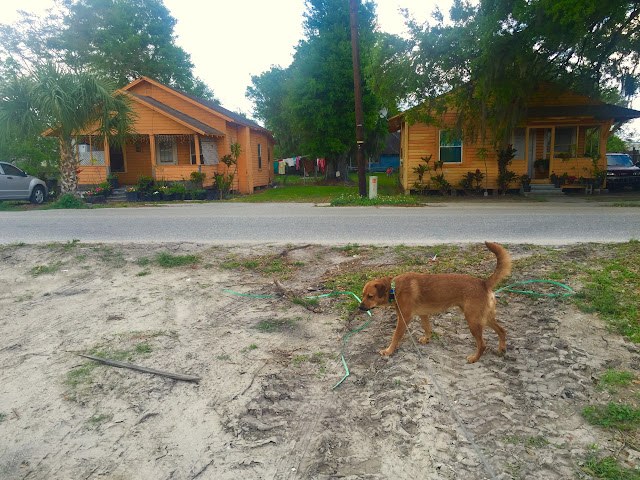 We stood around with some Mexican men who were roasting peppers and cutting up fruit and ate chunks of out of a cup with lime juice and hot peppers scattered over the fruit. We shared a roasted corn cob smeared with queso fresco  and more pepper flakes and were reminded of journeys to Mexico, and we were rendered nostalgic. It was a bit of a contrast to our lunch. 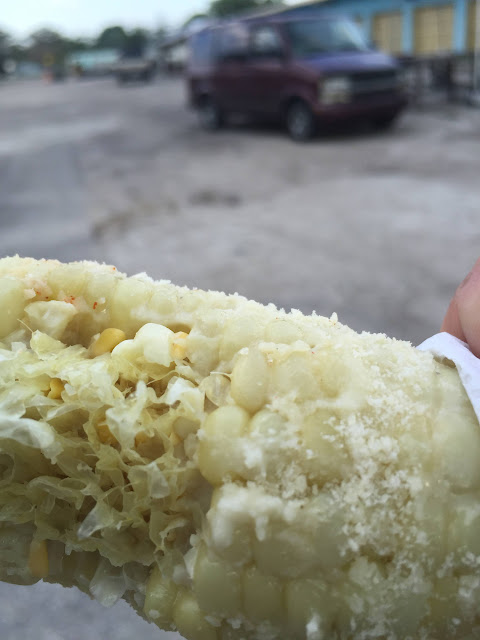 Rusty is a superb car traveler curled up like a little red fox on the back seat but ready with a  stretch and a yawn to come out into the world for the occasional walk. He had been rendering the car fragrant with his farts for some tens of miles which naturally came as the highway was bordered by fences and no place to walk. At last we found a spot and I backed up to the opening. He ran and romped and gamboled and fell into a rather full ditch. I dreaded the smell but he shook off the water, rolled in the grass and loped up to me with his tongue hanging and a big grin on his face. He smelled of water  and dead leaves and we went back to the car where he had a proper drink and a treat and composed himself for sleep. 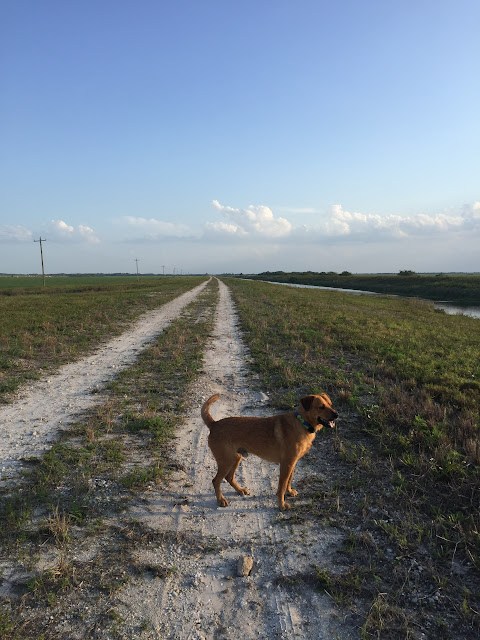 We entered the Keys in the dark as planned when traffic had subsided and had a swift trouble free drive home. We had a snack and a glass of wine while Rusty passed out, not on his couch but in his crate for which he seems to be developing a fondness. Strange dog. I think he was relieved to be home and ready to sleep off the effects of his first long road trip. 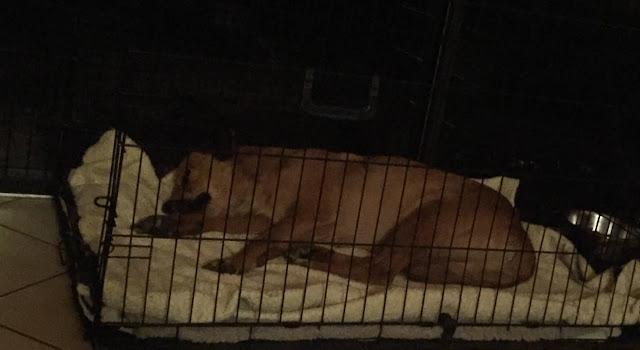