This is the blogger application for iPad. A brilliantly dysfunctional way to blog. Whoever dreamed this page up gets a gold star for not having a clue. Because here I cannot post a picture and then write a paragraph. All the words have to go at the top of the page and all the pictures at the bottom. Geniuses at work at Blogger, for very high pay I expect! 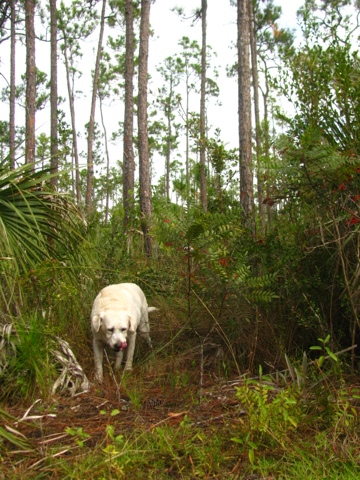 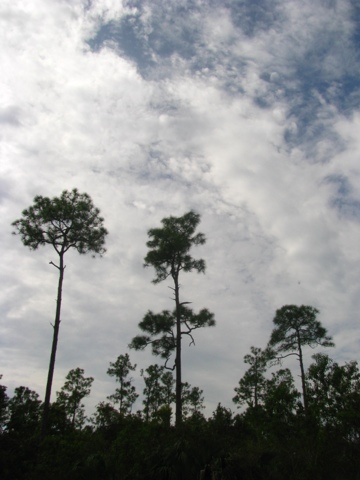 We had ourselves a brunch yesterday, on a tropical island which happens to lie not in the south seas as may appear to be the case judging from the palms lining the beaches around the resort.

It's a fifteen minute ferry ride from Little Torch Key at Mile Marker 28 and that's the only way you can get to the rather exotic brunch offered at Little Palm Island. Only overnight guests can tie up their own boats at the Little Palm docks. 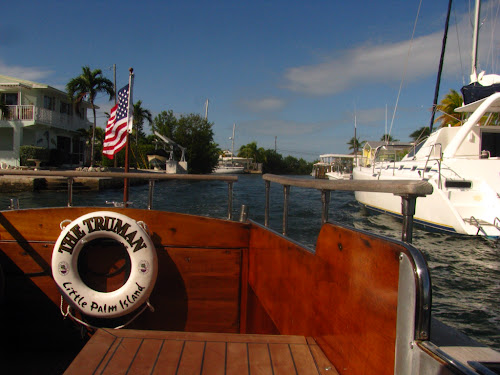 We ate our meal on the outside deck overlooking the water, after we were greeted atthe dock by a young shapely hostess wins fixed smile. The is something of the Stepford Wives about the staff who are used to waiting on the one percent and thus act subservient to a degree that is unnerving to ordinary mortals. 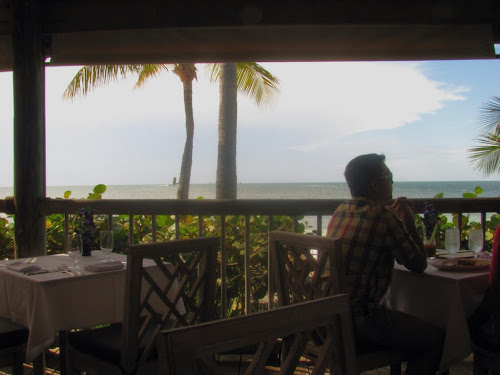 They offer a champagne and vodka bar with all the fixings needed to mix your own cocktails.

And there are several cold buffets around the indoor dining room, including seafood, meats, cheeses, fruit and pastries. A Falstaffian abundance of oysters! 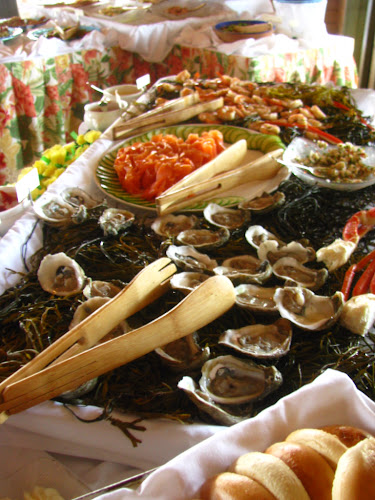 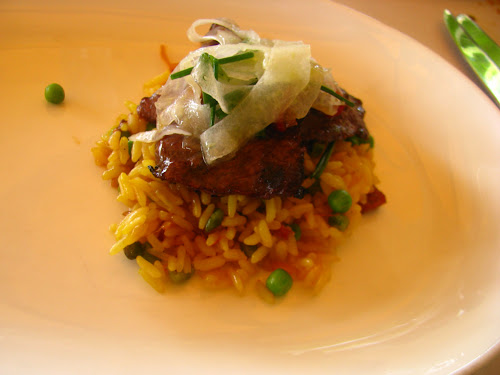 My wife liked the shrimp wonton better than I did, while I preferred the beef benedict seen in the background. 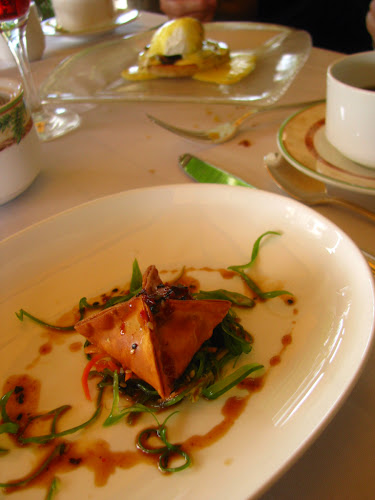 we both liked the only vegetarian offering on the menu, a delicious French toast of unique appearance. 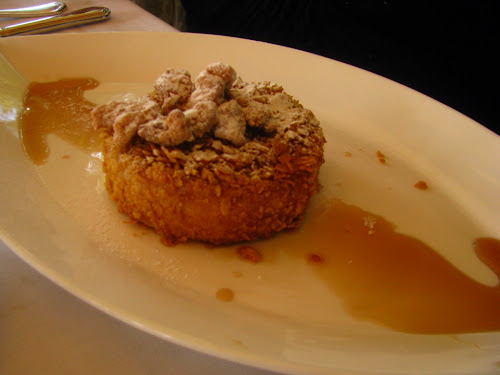 Our buddy Phil has been tickling the ivories for twenty years at Little Palm. 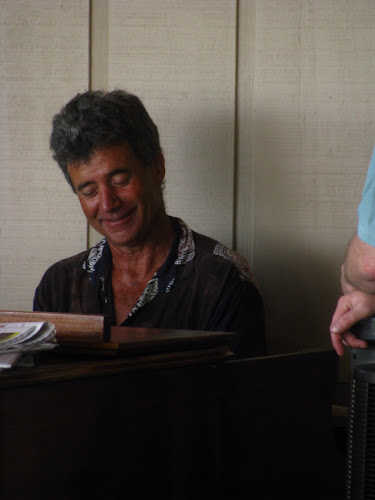 We ate with the lovely view you would expect from such a dining room, recorded for posterity in lots of home albums no doubt. 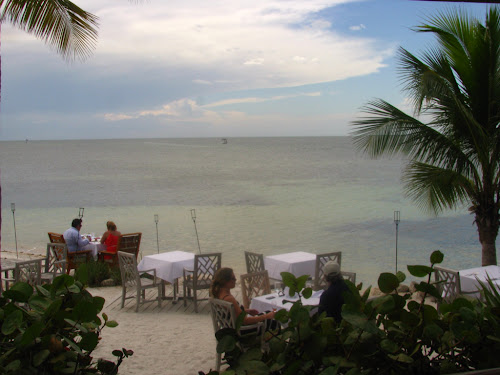 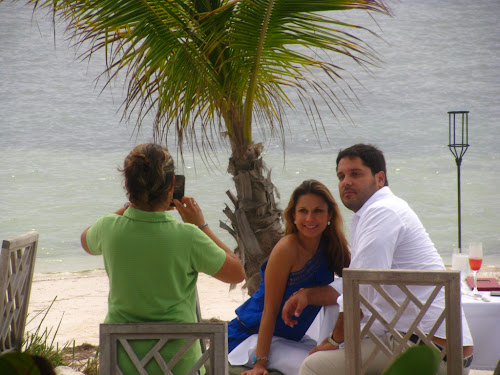 And then we caught the two o'clock ferry back home to the real world. 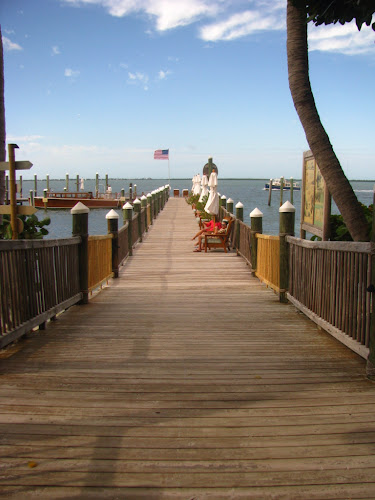 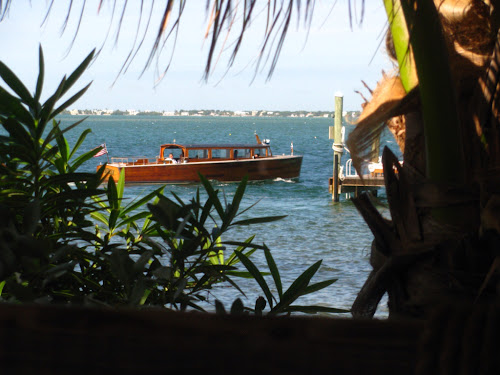 I think the full price for the brunch is around a hundred bucks, but we ate with a local's discount which was nice for us. On top of that my wife had a voucher from a local charity auction and so our meal was actually quite reasonable for the three of us, $140 including the obligatory twenty percent tip after all the discounting and stuff. Great fun and a great day out.

Posted with Blogsy
Posted by Conchscooter at 10:00 PM No comments:

I went to Schooner Wharf. I was at a loose end and wasn't ready to ride home so I thought: how about a drink in the last little piece of old Key West. 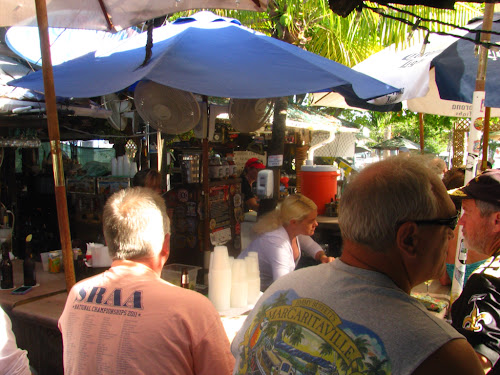 So there I was squeezing myself between sweating drinking patrons asking myself why is it that I don't much like bars when so many other people love them... I remember a comment on a TV show I used to like (Northern Exposure for the record) wherein the character Chris in the Morning muses on his lifetime appreciation for bars that some people are destined to own and other people just to drink in them. A few are us were genetically modified to sit on the sidelines and wonder about bars. 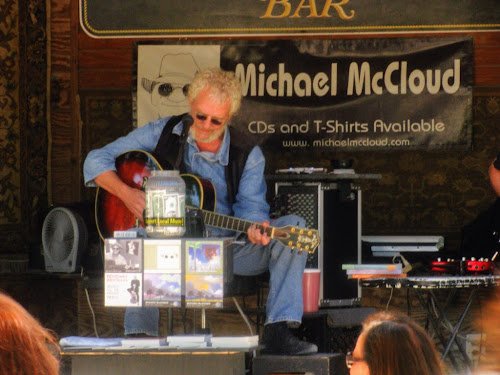 I like this picture of the musician so near and dear to the hearts of patrons of Schooner Wharf. Feel free of course to use it. His music was okay but I wanted to see the view so I climbed the stairs to the deck overlooking Key West Bight. Okay so the crowds below freaked me out but this was lovely. 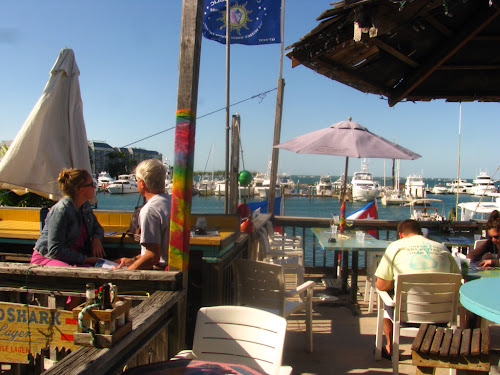 The big gray lump is GarytheTourist's home from home, the Galleon Resort, whence one presumably enjoys a similar view across the open water as well. Schooner Wharf's beer selection is a bit behind the times frankly. The best of the draughts was Samuel Adams and the best of the bottled was Red Stripe which is frankly inadequate in the age of craft brewing. 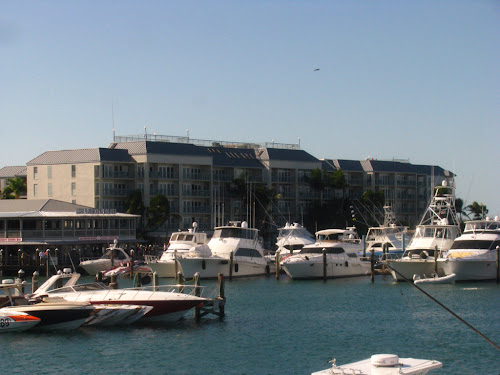 People watching was okay if you enjoy watching people crane their necks looking for fish swimming. 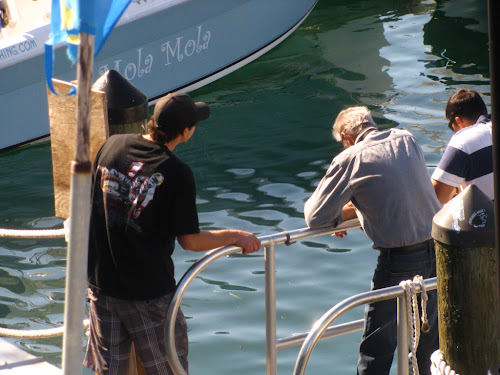 They do a lot of this sort of thing. 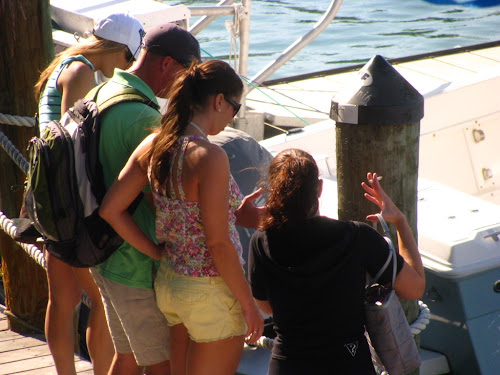 The helicopter flying over the power boat races was noisy. But so were the boats, so I guess they were even. 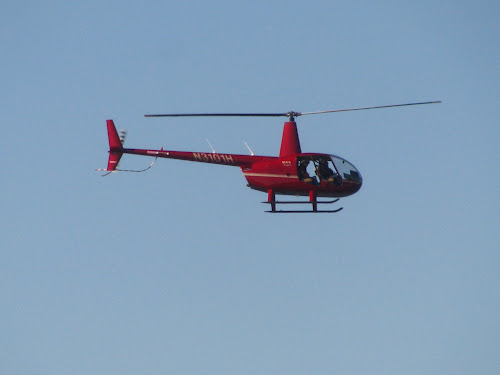 It was a pretty afternoon on top of the bar, made bright by Haiti's flag on the left and Cuba's on the right. 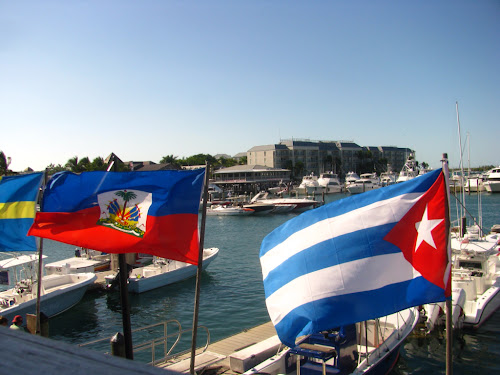 Lots of big boats cruised through the harbor for a while. The racers have inboard engines, the local boat had outboards. 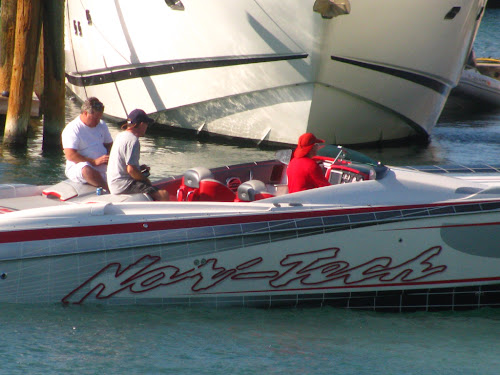 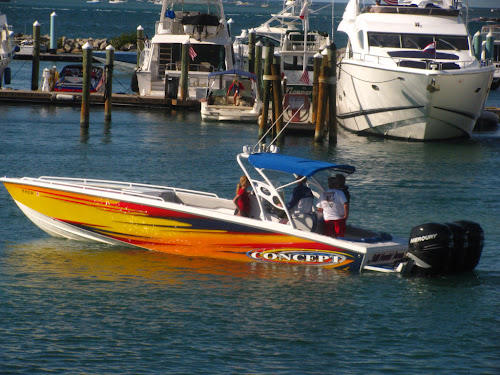 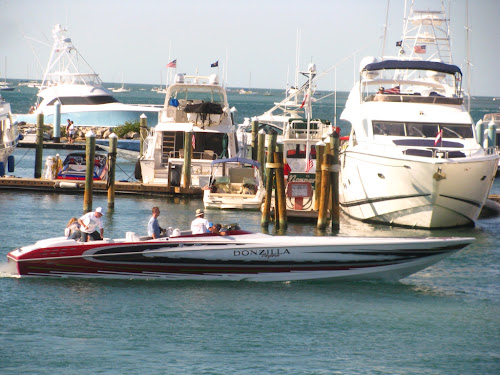 These strange vessels draw aficionados to sit and stare. I guess I look as weirdly absorbed whe presented witna. Parade of interesting motorcycles, of all things. I just got to look at a friend's collection of pictures of an exotic car show Up North. Internal combustion rules. 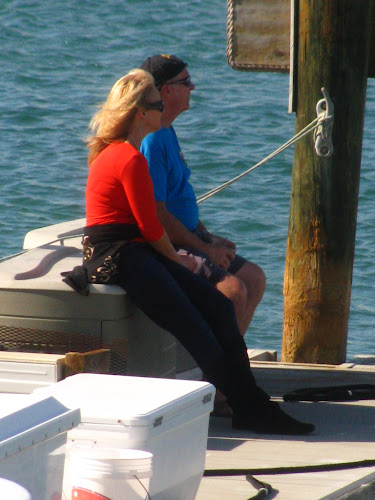 But then reality intervenes and we are reminded that we live In a cool little resort town with lots of water sports possibilities even though I think the waters are too cold for swimming in November. I like watching the oat loads of eager tourists going out on these beautiful waters. I have had a crappy year for bowing this past summer but I will be here next summer, if I'm spared, and 2013 will be my year to go boating, perhaps. 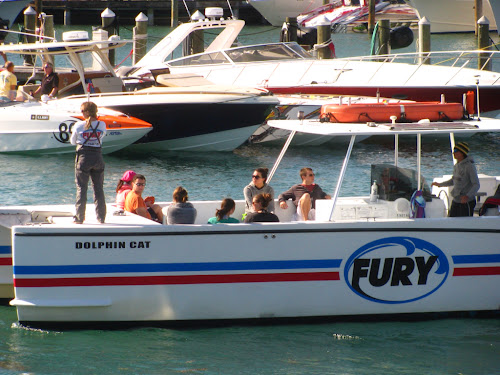 The deck started to fill up and felt like a proper bar so I thought perhaps it was time to beat a retreat, before the pigeons let loose. 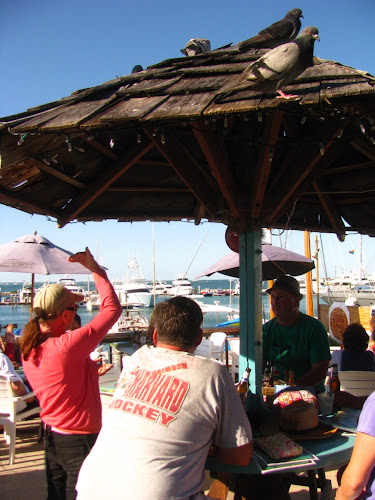 They do love their bar, don't they? 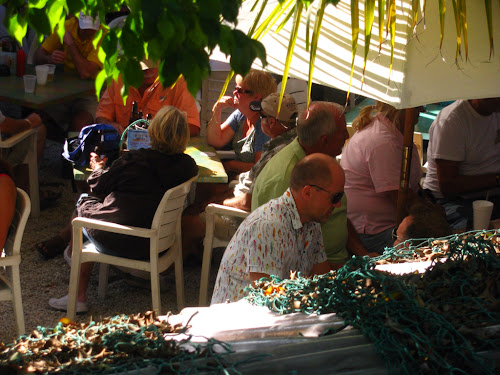 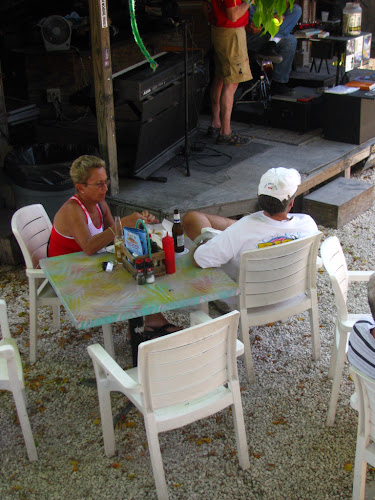