I have mentioned previously that I am a planner, and what seems like sudden, chaotic changes of direction in my life are actually worked out ahead of time. For the first time in my 63 years of life I am doing this quite openly for anyone who wishes to watch though I don't flatter myself that anyone would want to follow my example. I do recommend that if you can plan you should, and if you can't thanks to unemployment a death or some other unforeseen catastrophe brace yourself as change is very hard. 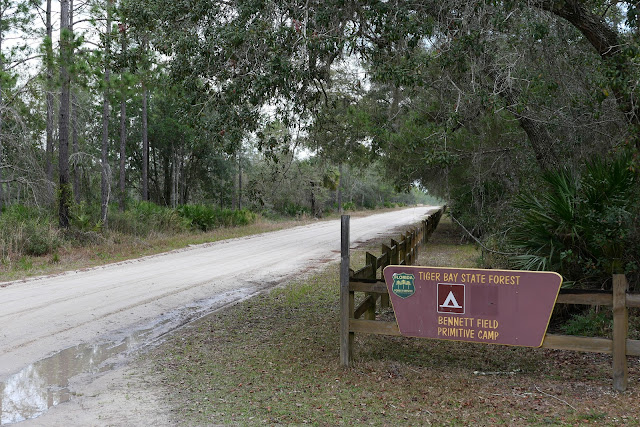 I mention all that by way of explanation that our desire to spend a night in a Florida Forest Service campground was one more step in the planning process. This was the first time in a year of van ownership we spent actual cash money to spend the night. The charge online was $8 per night with a one time administrative fee to pay the company managing the reservations, and that was another $8. Even for a single night fees were nothing compared to commercial campgrounds of course. 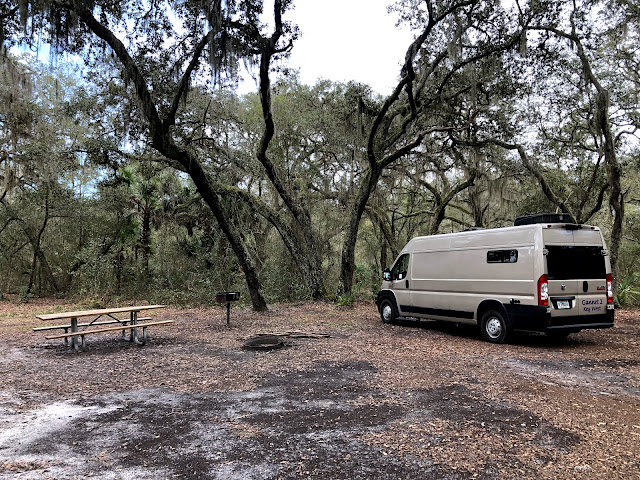 Bennett Field has half a dozen spots so we knew mingling and virus spreading wasn't going to be on the cards but the size of each space was astonishing. Our 21 foot Promaster van was lost in the acreage. We had a fire pit with left over wood, a grill and a sturdy picnic table set in our private patch of deep woods. It was as serene as being alone and we very nearly were. 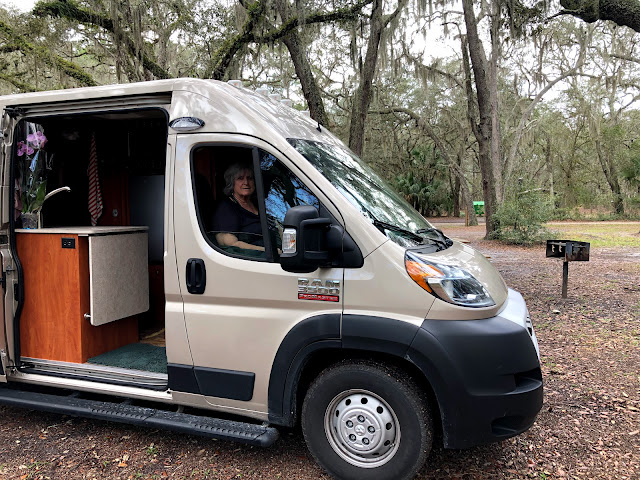 The reservation system said this spot was occupied Saturday night so we showed up for one night on Sunday but all we could see through the woods was a giant fifth wheel trailer and some blue tarps giving added protection to a tent camp, protection they were going to need as the night ramped up. 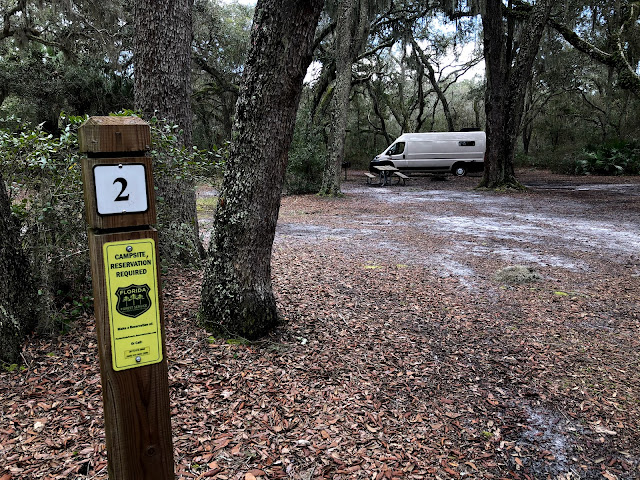 Warning, Toilet Talk, skip the paragraph as needed.
The single toilet and the wildlife proof green trash cans took care of everything we needed and our ability to pour out our porta potty makes a night in a  place like this extra useful on longer trips. I like the versatility of the glorified bucket as I can empty it everywhere and don't have to seek out specific holes in the ground to drain a  fixed tank through a hose. I am not bothered by the contents and we keep it clean and smell-free in its own shower compartment in the van.  I pursue simplicity as much as I can which is why we went all electric with no propane and  a massive 35 gallon water tank so we can live off grid without hook ups with the greatest of  ease and comfort. I hate to say it out loud but we planned the exact right van for us. 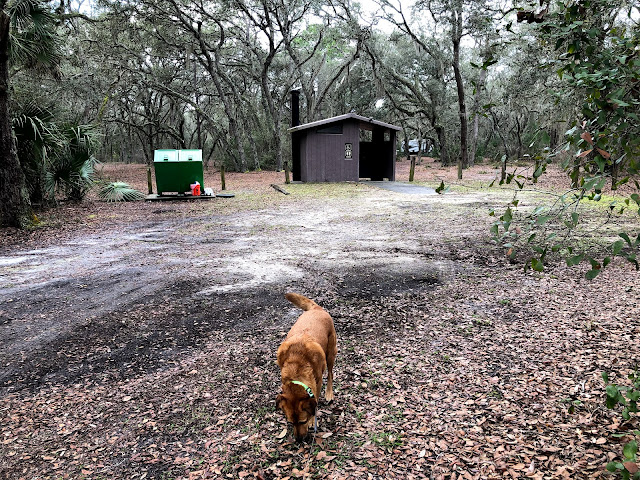 We based our retirement vehicle on our boat experiences traveling from California to key West in Gemini catamaran another long trip together that took six months to plan, but had us buy the boat two years before the trip. By the time we left the boat was bedded down and we had a vague idea how to sail it as San Francisco Bay is full of challenges for unwary sailors with currents, winds, lack of wind and untested anchorages. Consequently sailing down the coast of Baja Mexico was exciting not terrifying. 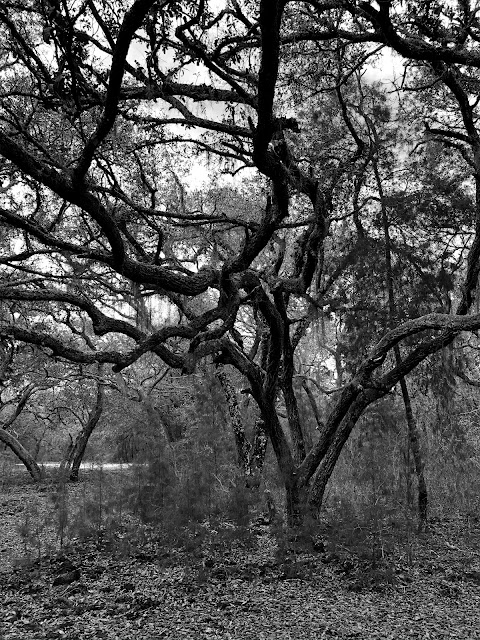 Having given ourselves two years to come to terms with living and traveling in a van which is a very small space we are happy to note that it is getting easier. I actually look forward to our trips and I know my wife does and she loves cooking in the van and surprising me with her versatility. Van travel exhausts Rusty but he has learned to cope and now when we arrive I throw open the door, he finds a patch of shady grass and sits there, and given time topples over and sleeps there. Practice makes perfect as they used to tell me. 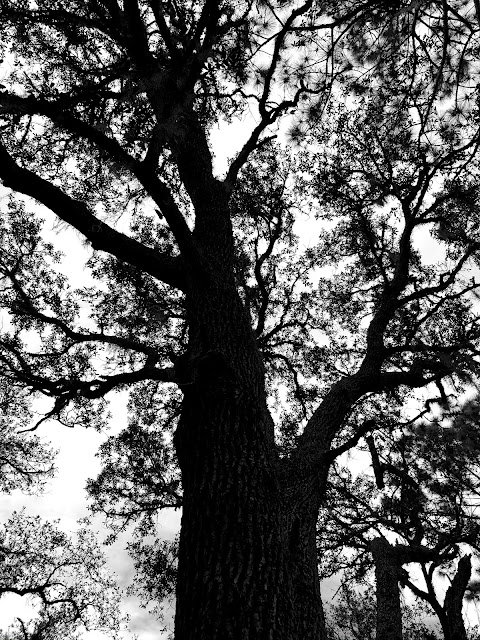 This idea of paying to camp in a "primitive" site seemed rather overwhelming to me, requiring me to go online and create one more sign on name and password and select dates and make a commitment etc... etc...but I got through it. I am not keen to sit in a campground plugged in to water sewer and electricity and cable TV cheek by jowl with other campers but this was very different. They may not all be as expansive as this but we got a taste for primitive camping here. 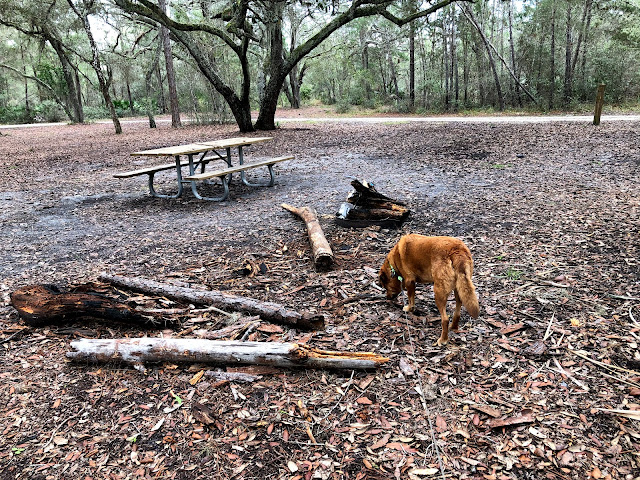 We organized ourselves at the picnic table, my wife with her watercolors and me with my paperback and predictably when the gods realized I was off duty they heavens opened and it rained. And thundered and rained hard and though we the humans enjoyed the sound of water and the elements outside as accompaniment to our indoor recreation Rusty hated the sound of thunder and demanded some attention. 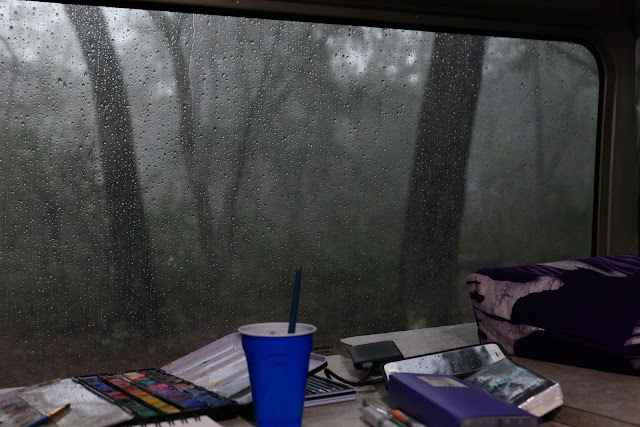 My dreams of sunset hikes in big trees, long shadows and sitting outdoors to the sound of a proper mainland forest settling down for the night evaporated, or rather drowned. 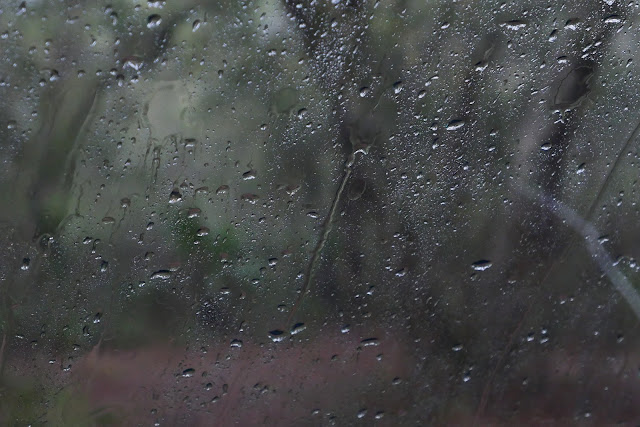 Bennett Field lies about five miles from the paved road that connects the forest to Highway 92 which is the main road from  DeLand to Daytona Beach. Bennett Field is the camping symbol middle right of the free map we picked up. We entered from the paved Indian Lake Road at the bottom of the map. 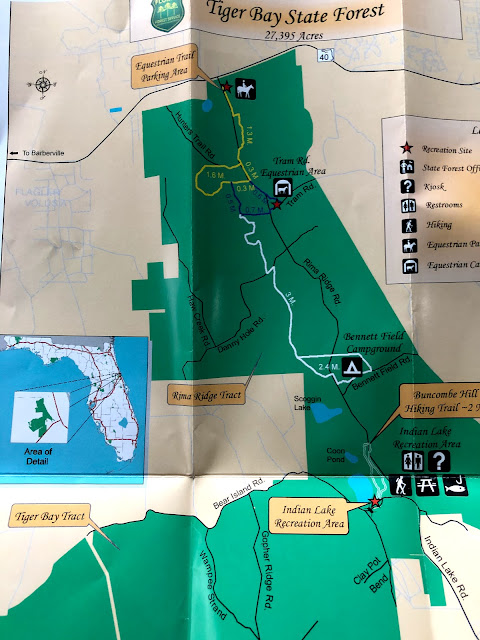 As we left the campground to take the van for an electrical adjustment at Custom Coach Creations in DeLand I snapped a few pictures through the campground: 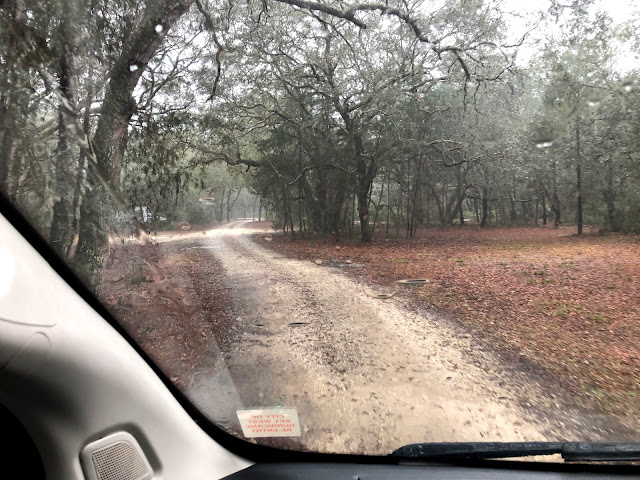 Our neighbors barely visible from our van in the fifth wheel and beyond them a tent covered in a  blue tarp for the hard core campers: 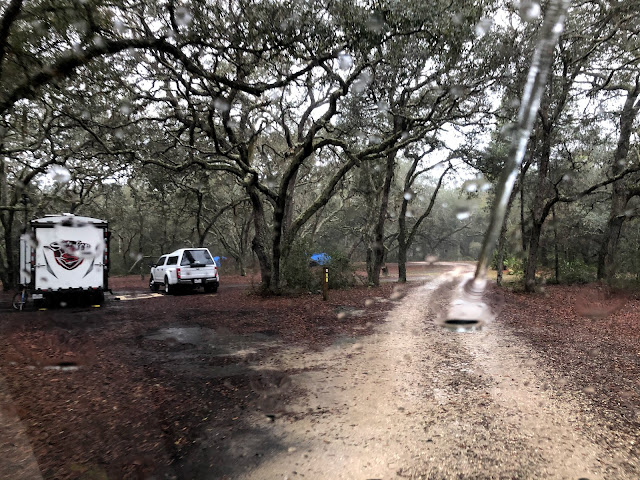 After we visited the factory and they spent the morning improving air circulation for our 3000 watt inverter before we  drove eight hours home. The inverter is the brains of the van, monitoring electricity whether it comes from a 110 volt line or from the solar panels or the engine as we drive. It had been overheating and shutting off when we plugged the van into a power outlet and also if we ran the air conditioning constantly which is our heaviest load by far for our 600 amp lithium batteries. Apparently it needed better air circulation to stop overheating and the factory made the adjustment for free as part of our year long warranty. Custom Coach has been brilliant to deal with and we highly recommend them. 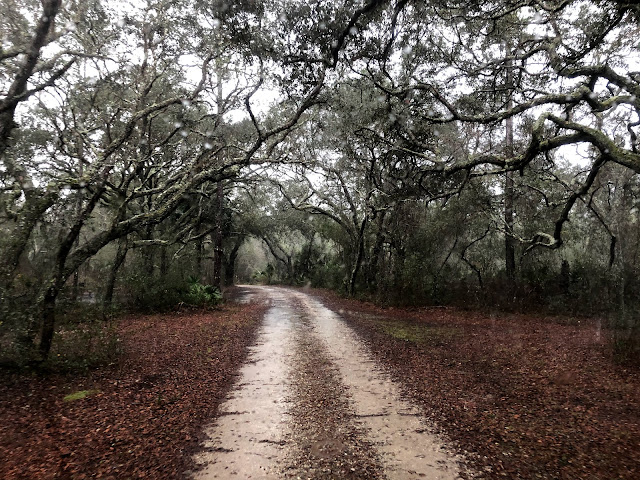 Getting out of Bennett Field down Rima Ridge was a slippery sandy affair but we did fine with careful steady driving. Next month I am taking the van to Jacksonville to get a front winch installed from FreedomVanGo, a dealer installing $3,000 Van Compass option that should give me the confidence to take my front wheel drive van into lonely sandy beaches in Mexico and points south. I am not a fan of four wheel drive as I much prefer paved roads to dirt but the winch is a Hail Mary addition designed to prevent us being stranded if deflating tires or sand planks (already onboard) don't work to get us out of mud or sand. Like I said I spend a lot of time figuring what makes sense to me and what doesn't. Rock hopping doesn't, soft sand  en route to a lonely isolated beach does. 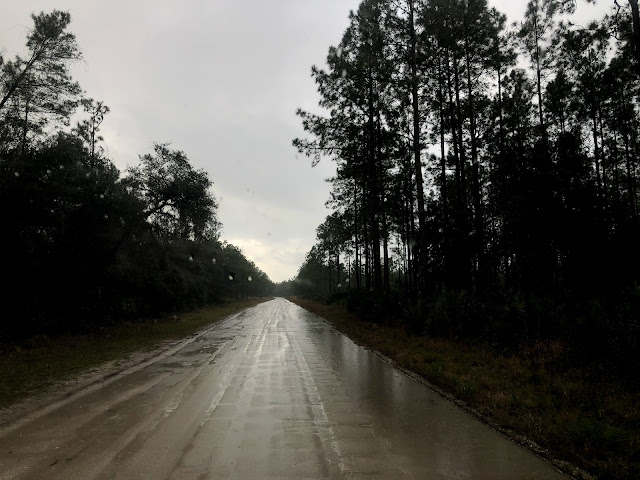 Practice makes perfect and we are well aware Alaska next year will look like this much of the time. Being bummed out about rain or 60 degree temperatures will be an unaffordable luxury. I still prefer palms and sunshine but most of the world isn't like that so here goes...we go where it sometimes snows. I shall complain a little I can promise you that. 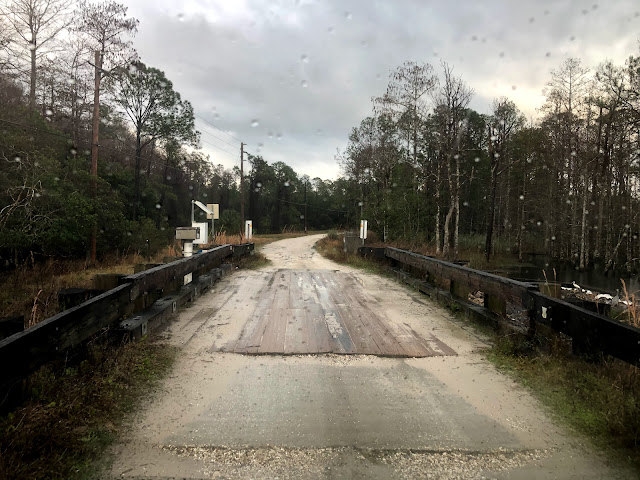 Driving the sandy roads covered our running boards which is actually pretty cool for a van that some people think is not overland material. I know it was hardly a test of it's capabilities driving wet sand, but for me the idea that I can take the van places where it is not expected to go will be part of the fun of retirement. I remember we anchored of an island on Panama's Caribbean coast having negotiated the infamous canal and a sailor in a heavy traditional looking boat rowed over to say hello and when he found out we had sailed our flimsy catamaran from San Francisco he looked astonished  and blurted:  "They aren't supposed to be able to do that are they?" A lightweight catamaran has since been proved to be a very capable voyager. Perhaps the humble Promaster can do the same. 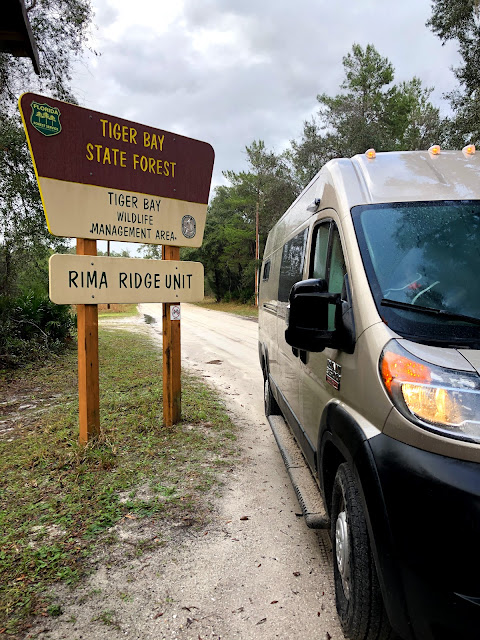 It was a fun weekend and we practiced a couple of new skills, spending a discreet night in a  bank parking lot after our planned stop in a freeway rest area was nixxed by construction and then dealing with rain and wind in Flagler Beach and practicing converting our bed into two couches to use as a day sitting area in the rain. 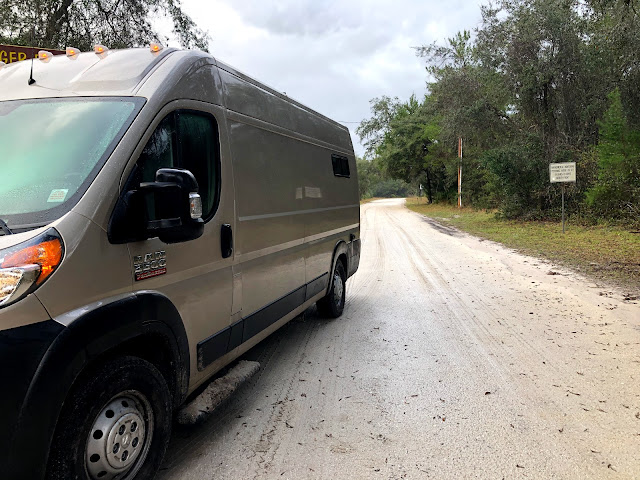 The factory workers saw the sand caked in the van and they approved because the comfortable interior they built for us nether creaks nor breaks, at least not so far and we are testing everything. 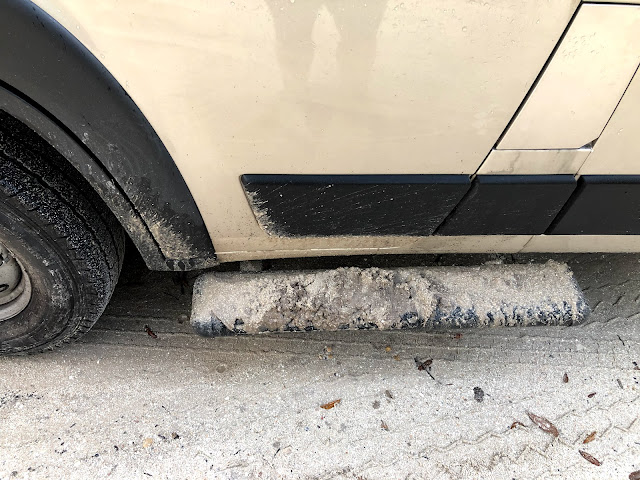 The van as kennel, fridge/freezer on the right with toilet compartment behind it, sink with drain tank, and electrical induction stove on the left next to it. The bed in the back occupied by Rusty converts electrically into a settee (couch) on either side with a table that can be set up between them. We store the bedding in a compression bag when it isn't deployed as a very comfortable queen sized bed across the back of the van. Only the Promaster van is wide enough to accommodate a 6'2" sideways across the van. That saves a ton of space. 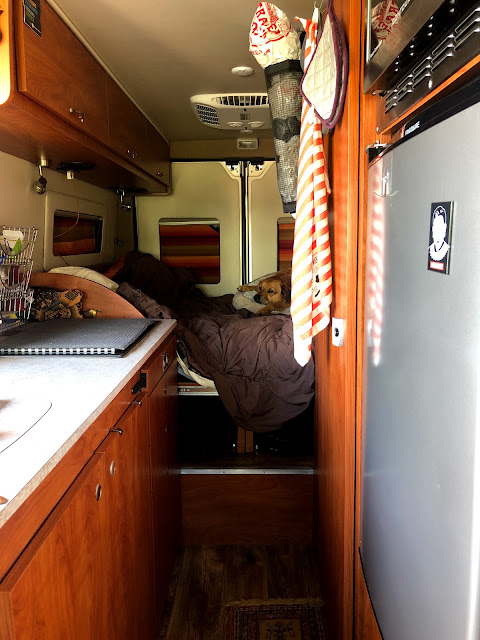 At 70 square feet it has everything except a ton of room. So far so good.
Posted by Conchscooter at 12:00 AM 9 comments: