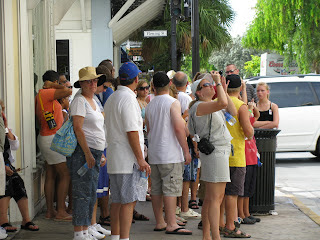 Duval Street, hotbed of iniquity and vice, home of unbridled drinking and wild street parties, fights, vomit and rivers of spilled beer and islands of abandoned plastic Dixie cups. If there is a heaven and a hell I expect my hell will be Duval Street at 2am for the rest of eternity. However at 9 am filled with Blue Heaven's pancakes and buzzing from several cups of strong coffee Duval Street looks almost human to me. 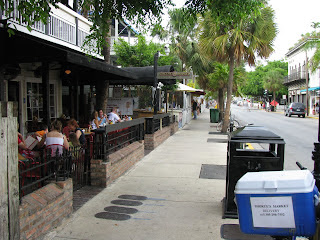 I went to Blue Heaven but many people looked happy enough breakfasting at the scene of last night's debauchery while these two fine specimens of vacationing womanhood were enjoying their private terrace at La Concha, ignoring the toiling masses in the street below their hotel: 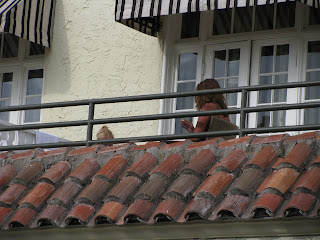 The cab driver saving gas by keeping his windows open while he waits for a fare: 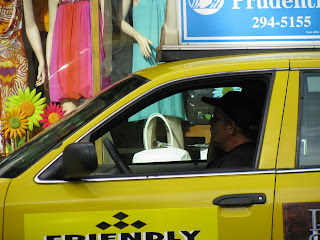 The street sweeper cleaning up the debris in the gutters: 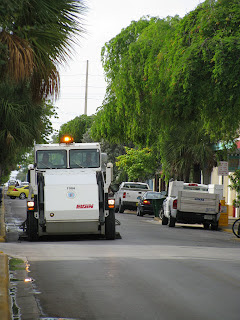 Then there is the city employee hosing down the sidewalks to prepare the street for fussy visitors who prefer not to wade through trash on their way to get toasted: 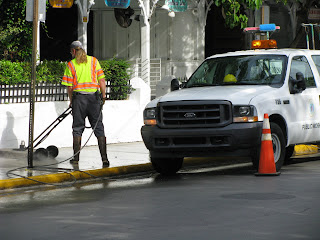 Some are already busy at the bar in Sloppy Joe's at 9:19am (I checked my watch): 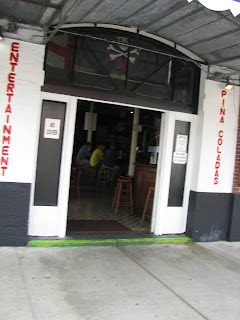 And I am forced to wonder how many tourists in Key West have ever seen The Bull looking like this: 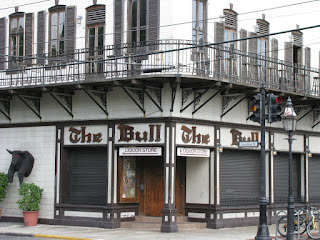 Nothing quite so forlorn as a bar all closed up. I caught this guy, an advertisement for a real living wage if ever I saw one, toiling up Rose Lane: 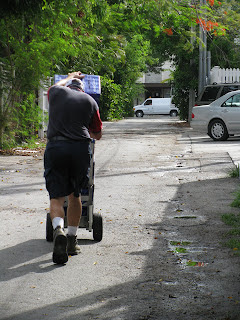 All those beer bottles that get thrown away empty, not recycled, arrive on Duval by human power, even in the early 21st century. And there is the vendor at Duval and Eaton who will spend the day getting toasted on his own (by the sun) selling Key West made trinkets. He starts his long day hauling his cart into position by hand: 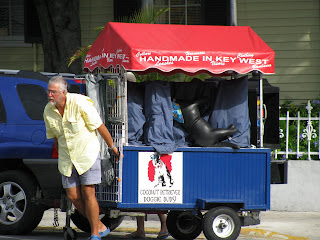 While across the street at St Paul's relief is at hand if only one has the patience: 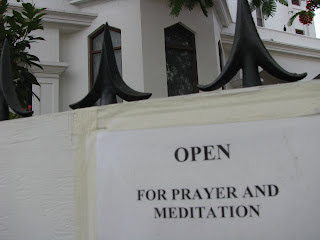 And don't forget the lunch time organ recitals which are delightful and free and start at 12:10pm and last about half an hour, in the cool recesses of the church.

One line at the end of the essay persuaded me to include this page in my occasional retrospective of seven years of blogging about the Lower Keys. That was the mention of the Top at La Concha now gone and no more suicides will be coming from there unless they decide to get a spa treatment first. I didn't know Roger back then and his Made in Key West cart, but he is still there and I get my colorful dog collars from him (for my dog, not for me). But Duval is Duval and I expect in another six years it will be similar if not exactly the same.

Even at breakfast time Duval Street has its share of tourists, if you want the main drag to yourself its best to get here well after 4 am, which is when the last bars close though the crowds will take a little time to disperse. Or show up sometime before 8 am when the street is almost empty except for the early workers buying coffee and cycling to their places of employment along the street. By 9:30 Duval is waking up: 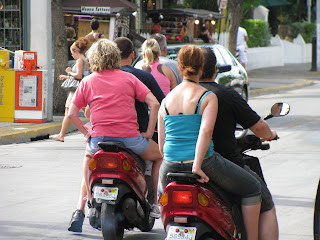 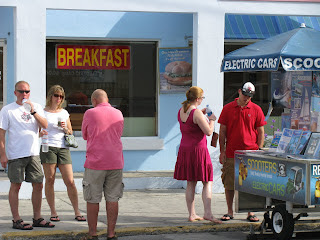 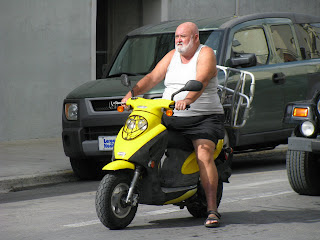 The operator at the Hyatt booth was kind enough to help out some faceless visitors seeking directions: 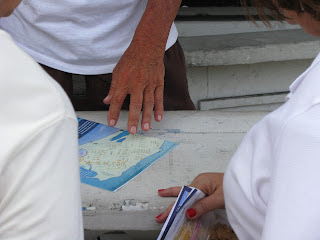 Some other early birds on Caroline Street were getting last minute instructions on bicycle riding, as they wheeled off their rentals: 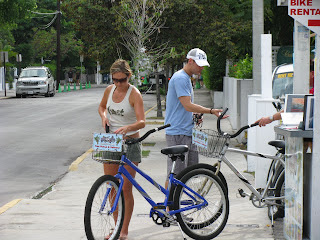 Bicycles are an excellent low stress way to get around town, especially if you're on vacation and it doesn't matter if you show up sweaty and hot. Mopeds are a close second and for those who rent cars I found these next two pictures, shot on Charles Street, to illustrate an obvious parking point: 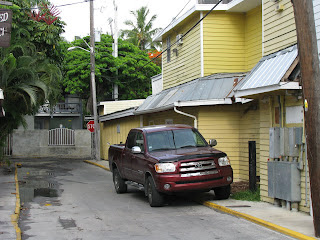 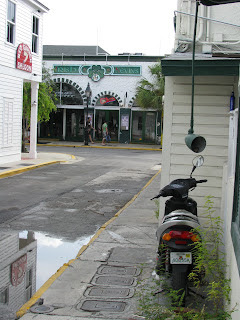 Bear in mind these are likely locals vehicles and it usually doesn't pay to park like a local in Key West as parking enforcement and property owners usually know and recognize vehicles that belong in outlandish spots. Technically its not legal to lock a bike to city sign or street lamp but it would be an unlucky tourist that got her bike removed by Public Works during a brief stop. Riding the wrong way down a one way, even on a bicycle can get you a ticket, especially if you have a shitty attitude. As far as parking goes you can't beat a bicycle. And, by the way, if you have a few extra bar stools you don't need this is where you can dump them apparently: 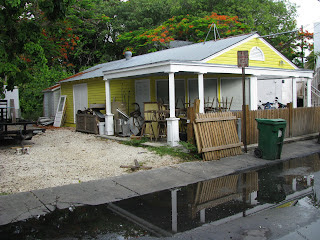 Telegraph Lane is not quite as neat as Duval, because this is the tacky back side of Duval Street the place where the work gets done that keeps the illusions whole on the front side. It's also a short cut to Front Street and a place where rain puddles making it even more disreputable after a summer thunderstorm.

Back on Duval I walked past these family types and I could have sworn I heard one of them remark on the similarity of a bong in the window to one they had at home. I must have imagined it: 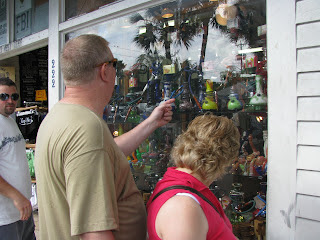 I've remarked previously on the rather poor taste of many of the t-shirts displayed on Duval Street and some people think bongs, typically used to smoke marijuana shouldn't be on sale either. But there they are all lined up for inspection. Rather more prosaically there is a small grocery store on Duval Street and goes by the name of Shorty's, and I've never even stopped off to buy water here, but for some reason, probably because the air conditioning beckoned, I stepped in. 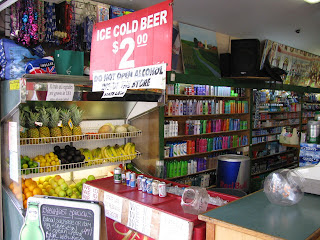 It was quite the revelation actually, like a real grocery store with all sorts of useful items for the forgetful tourist. I ended up spending $13 on stuff that looked pretty good to me. I got the Turkish coffee as a taste test for my wife who has a trip planned there (Turkey, not Shorty's) with some girlfriends in September, and I'm quite partial to Patak's curries so I bought a couple of meals in a box I'd never seen before. I've since eaten one and they are quite decent too, hurricane food or for a quick dinner at work: 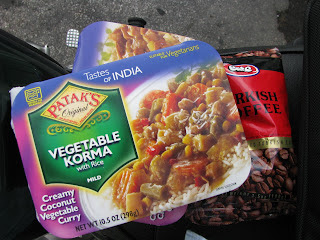 My final tour de tourist was to tag a group of cruise ship visitors who were getting a guided walk around downtown. I missed most of the speech on La Concha but I think he was going on about suicides from the top of the hotel

Most tour guides tell the story that people who jump always leave behind a glass of chardonnay at the top of Key West's tallest building. Don't ask me I've never checked. And with that crowd shuffling off I found Duval starting to wake up with both eyes open and thus it was time for me to go home and enjoy the last hours of my "weekend" off.