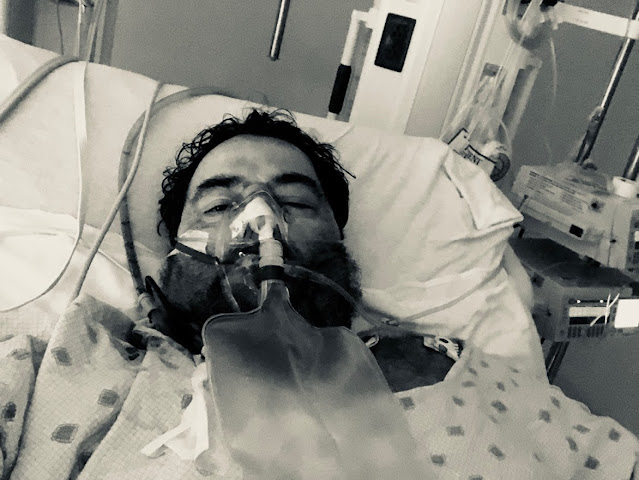 Three years ago a woman with a child in the back of her white Sebring pulled out of Cutthroat Drive across from the Square Grouper restaurant a mile from my home. She and her husband had no assets as they were already under a quarter million dollar court judgment and she carried ten thousand dollars of third party insurance, the bare minimum under Florida law. I was following a large pick up truck on my Suzuki Burgman 200 and ploughed at 40 miles per hour into the front wheel well of her car which stopped in front of me after it tried to dart through commuter traffic to get across the highway. I had full insurance coverage with a $4,000 deductible  from my job with the city and I was wearing my crash helmet which was the first in a series of fortunate steps that saved my life. 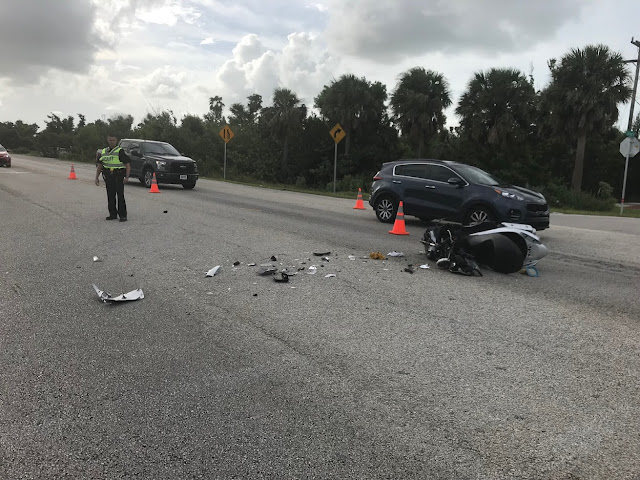 I remember the white car wheeling in my vision as my pelvis crunched into the handlebars then my head and shoulder hit the windshield scratching my helmet and breaking my shoulder, before I cartwheeled again. a massive kaleidoscope in slow motion in my head  as I hit the ground on my feet further damaging my pelvis and breaking my right thigh bone in two places. I was conscious the entire time and found myself lying on back looking up at a blue sky filled with puffy white clouds. 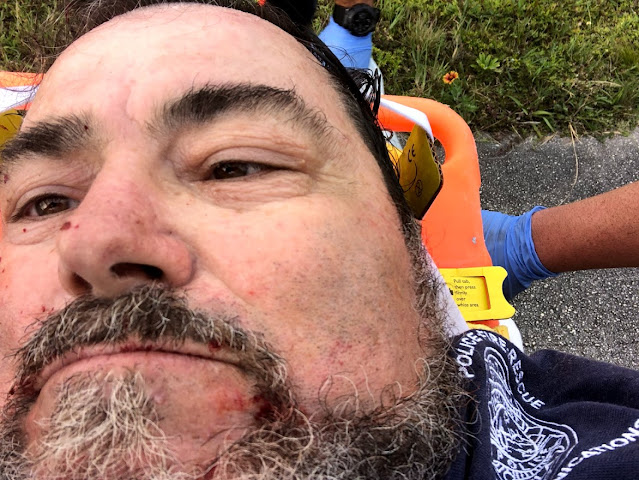 I lay there unable to move and I could feel my right leg felt spongy as though sticking up in the air and I wondered if I had amputated it. A man appeared looking freaked out and i asked him if my leg was in place. He looked down and stuttered it looked okay ( I was wearing long pants) and I saw over his shoulder a  woman holding her hands to her face. 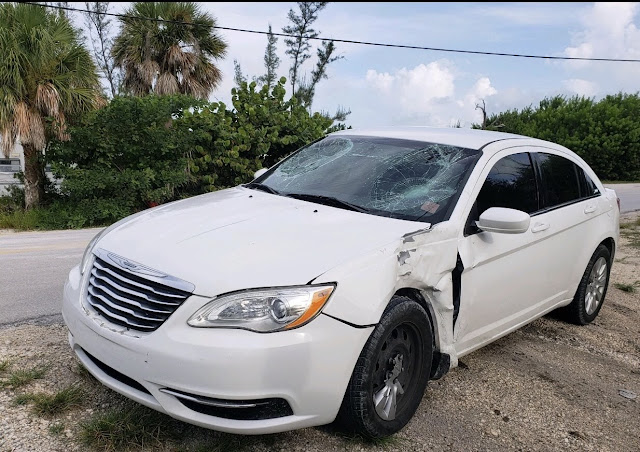 You've fucking killed me I said looking into her eyes and she backed away. Does anyone know where we are I called out from my prone position on the road. Someone said yes so I told them to call 911. It seems absurd now but this sort of accident was my job and I suppose I had an automatic response. I yelled out my wife's phone number and told someone to call her. She was actually in Miami on a trip and ended up with a  short drive to the hospital. Lying in the road immobile I was really worried about being late for work, because when one dispatcher doesn't show up another one can't go home. Such are the thoughts of a dying man. 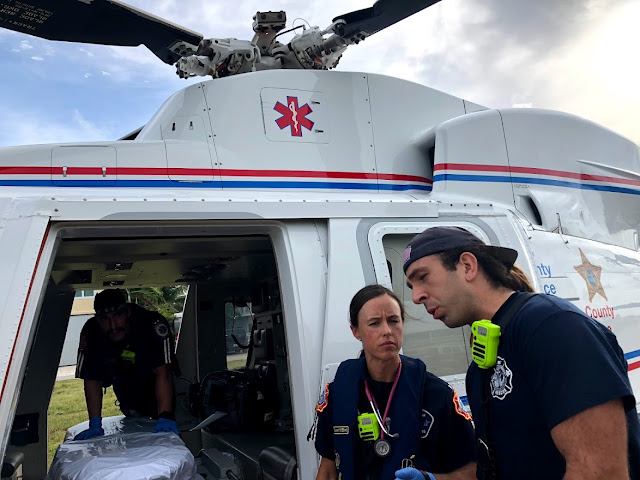 I knew I was dying, I could feel myself getting cold and I had the frequently described out of body experience floating up to the clouds and away from the noise and the commotion of the rather spectacular accident scene I had left behind. It went quiet and I rather hoped I was going to meet the dogs of my life who had gone before me. You may have seen that meme of a circle of dogs looking down through a  hole in the clouds and I wondered if I would get to see Bobby and Sandy and Emma and Debs and Cheyenne again. The prospect pleased me. What I didn't know was a woman had knelt down beside me and was holding my hand talking to me apparently. She wrote to me later and told me. My peaceful ascent was stopped by a paramedic who had arrived and woke me back up. Someone gave me my cellphone which survived the wreck perfectly in it's Otter case and which I only recently traded in for a new iPhone. I took the selfie  (above) as I lay on the backboard. I only had the use of my right arm (I'm left handed) and that phone held over my face was my only entertainment for the next few weeks.  I wanted my wife to have a last picture of me, and looking back I was disappointed I wasn't smiling. The surgeon said he'd never seen someone take a selfie at their crash site before so I suppose the badly angled picture of me staring away has some historical value! 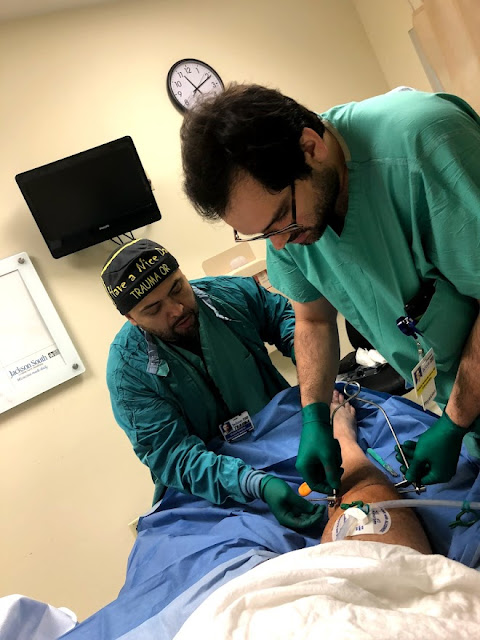 They put me into an ambulance and drove me a couple of miles to the airstrip on Summerland because I was lucky Trauma Star was available and the weather was good for flying. The nearby ambulance station on Cudjoe and the helicopter were the next steps in keeping me alive that day.  The flight was horrible, and as the shock wore off I felt every blow of the rotors overhead shaking my pulverized bones. I lay on the slab in the middle of the tiny cabin counting the rivets claustrophobically as we flew. My condition was deteriorating so instead of flying to the main hospital further north they took me to Jackson South and they kindly called my wife on my phone so she could get there quickly. I was wheeled out onto the roof landing pad and I could see the sun and the blue sky behind the doctor's flapping white coat as he walked alongside the stretcher. 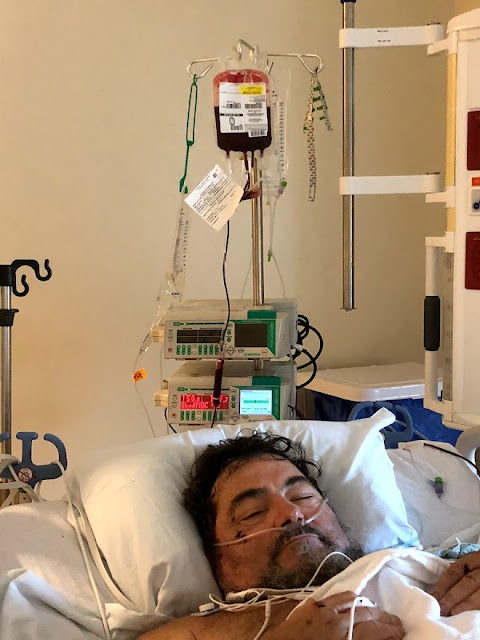 The MRI was funny as I couldn't move anyway and all I had to do was stop breathing  when they asked. I don't mind the confines of the tube but I couldn't stop giggling inside as I thought how this was the perfect condition to be encased in an x-ray tube unable to even twitch. I dare say I was quite off my head at this point. I didn't know it but my wife and a friend were in the waiting room to hear what was going on. Even before Covid I wasn't allowed visitors I guess as she only saw a glimpse of me being wheeled about as they figured out how bad my injuries were. The nurse told her I had a fifty fifty chance of living through the night which didn't do much to cheer her up. I had no idea. Apparently all your nerves and arteries are bundled through your pelvis and any small tear can cause fatal hemorrhaging before you know it. 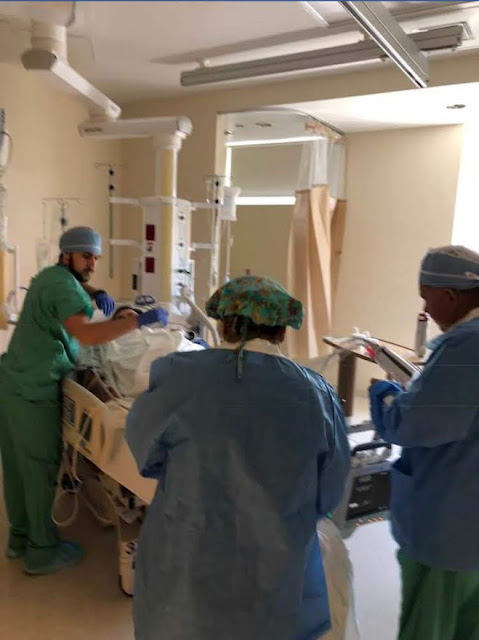 The pain in my leg was excruciating and I guess they decided to do something about it. In a photo above I took a picture as the on duty surgeon came to my room with his team and a drill apparently at 12 minutes after eleven that night (!) and he drilled a hole in my leg. The sensation of the skin being torn by the drill is very vivid in my mind still but the pain of my misaligned thigh bone broken into three pieces overruled all other pain. They lined the bones up, put me in traction pulling the bones apart and settling them back in their places, and miraculously the pain went away.  I came to love Dilaudid a powerful narcotic pain killer which has the unfortunate side effect of bloating you and constipating you in spectacular style. Based on my limited experience drug addiction must be an extremely inconvenient way to live given the problems these very useful drugs bring in their wake. 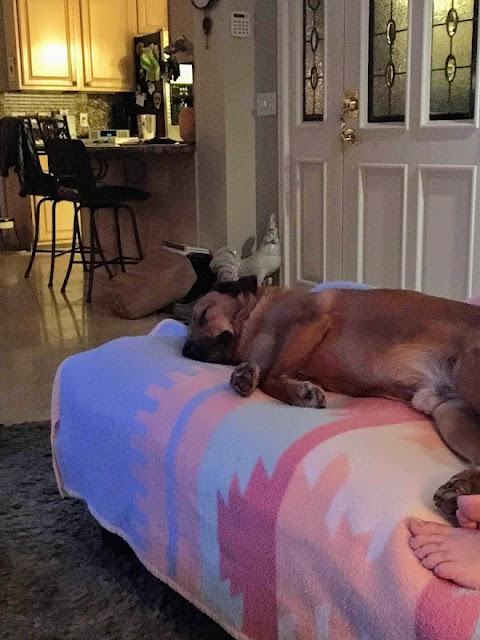 Of course I worried about Rusty who I did not get to see for three weeks until I was transferred to the rehab hospital but Layne had called friends and Wayne and Chuck made sure he was okay while I was away trying to stay alive. He took all the weirdness as it came and was never a bother. A remarkable dog. 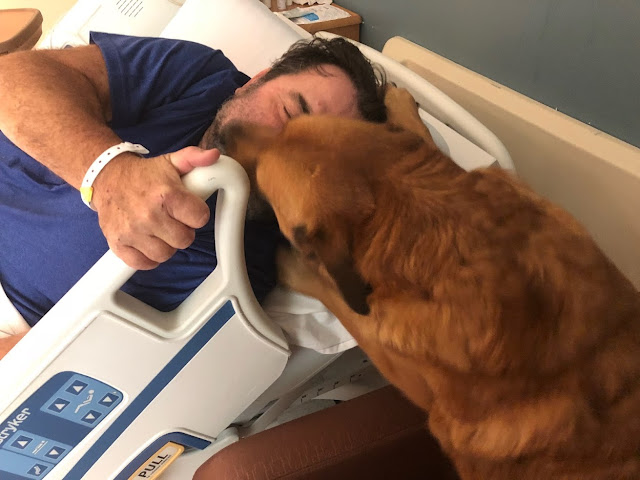 I had four surgeries, one lasting seven hours to rebuild my broken bones and they only started after my condition settled down and they figured I had a chance to live. I got eighty stitches and through it all I spent a day on a ventilator which I had to keep down my throat after I woke up from the pelvic rebuild. 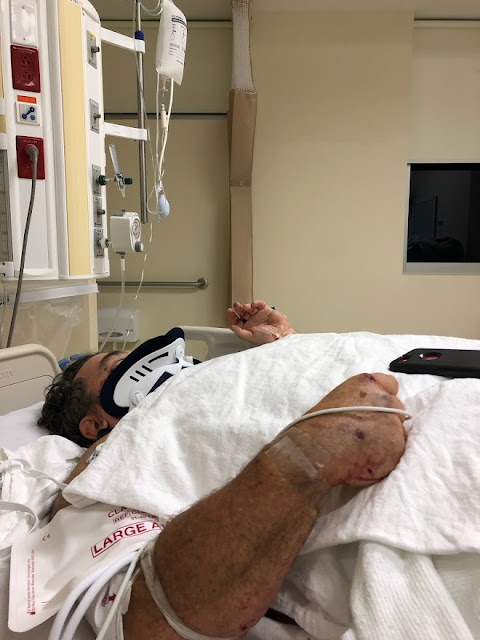 I spend a great deal of time wondering how Covid patients go for days and weeks on that infernal machine. My wife said she never saw me so angry in the hospital as when I woke up with the tube down my throat. If you think dying of Covid is the only measure of misery that disease brings, think again. 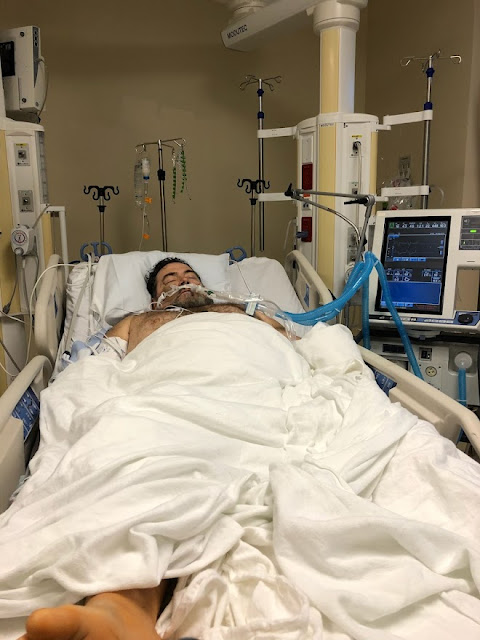 This story had a happy ending for me. My wife suffered in many ways a great deal more trauma than me. I can say that as creepy as it looks from the outside being in a hospital bed and struggling to stay alive is a relatively simple proposition. She was worrying about everything, dealing with the staff managing the bureaucracy handling the expectations. All I had to do was lie in bed, reassure anyone who asked how I was doing  and call the nurse's aide when I thought I might have taken a shit. You really can't feel anything in this condition unfortunately. I couldn't even wear a diaper at first owing to my injuries. That's a pretty basic struggle for anyone who is used to managing their life functions easily and on their own. 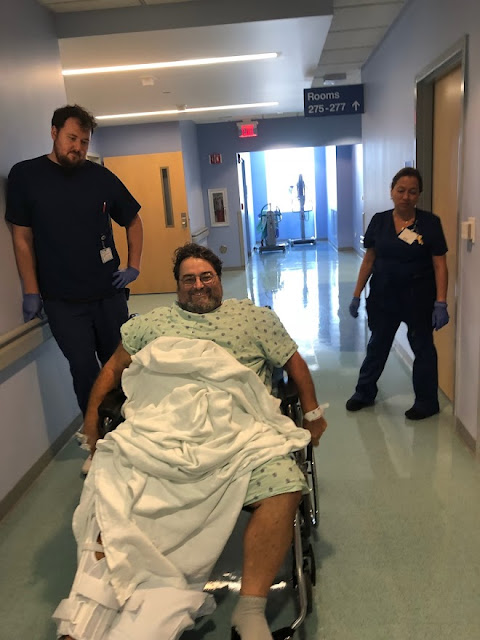 Sean my first Physical Therapist got me going right away. He sat me up in bed like a giant doll unable to hold myself up. He lifted me into a wheelchair and supported my head as my neck muscles tired after a few minutes and my head flopped around like a cartoon character. My broken leg I called my dead sheep as it was wrapped in some scratchy material and held straight by a brace. A nurses aide had to support it whenever I was maneuvering in and out of my chair and when I was in bed my legs, which I couldn't move had an annoying habit of slipping out and I had to get help to put them back in bed. Oh the indignity!  Nowadays aside from having no feeling in my thighs I walk pretty much as normal. My wife says I roll a bit when I'm tired and sometimes I drag a foot, hopefully when no one is looking. But I can walk and almost keep up with Rusty. 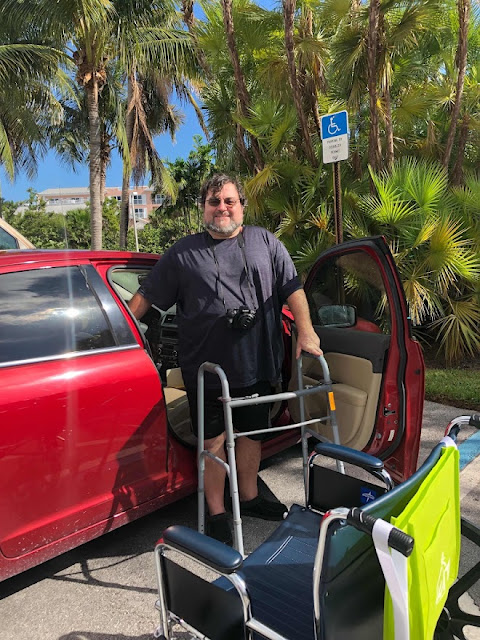 I promised the surgeon before they put me to sleep that if I lived, and no blame to him if I didn't, I would do my best to live a life worthy of his efforts. Three years after all this drama I now want to put it behind me and get on with that very phase of the program.
Posted by Conchscooter at 12:00 AM 7 comments: