Wayne and Chuck mentioned on their blog that they has been making crab traps and the stone crab chase was on. Their most recent attempt to pull dinner from the deep saw me alongside them in their boat, and where I go my pocket Canon, camera that is. is sure to follow. 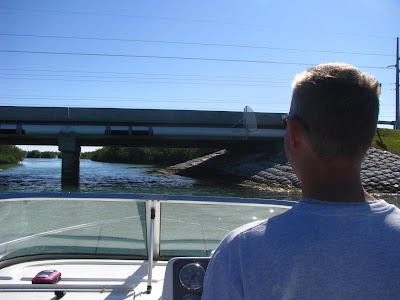 Chuck was driving, Wayne was being the deckhand, as we approached the shallows with crab line tool in hand. 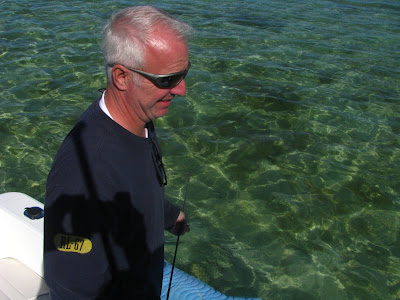 I of course got distracted by the pretty picture a passing boat created, 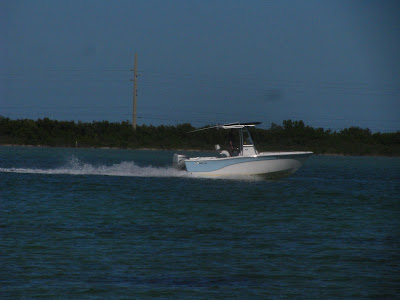 but there was serious lifting to be done. I kept back while Wayne hooked the line and hauled up the first pot. 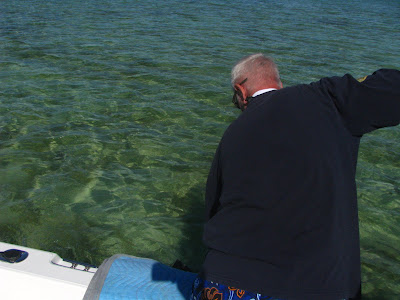 Florida law allows five pots per licensed resident and the boys have one license only so they have five pots strung out in the waters in front of their Sugarloaf home. They tell me (a non angler) that there is some obscure limit on the number of crab claws each license allows, a gallon perhaps, but as they aren't likely to ever get even close we are all a little in the dark on the subject. 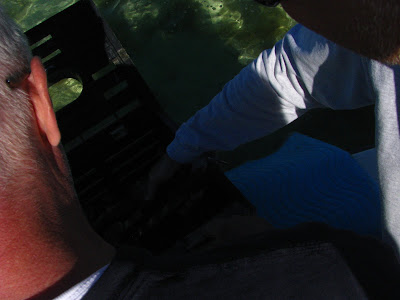 The boys pulled with a will. Cheyenne found the process a lot more fascinating than I did. Crab pots smell fishy and they accumulate slime that gets on your arms and shirt sleeves and leaves gray streaks everywhere. 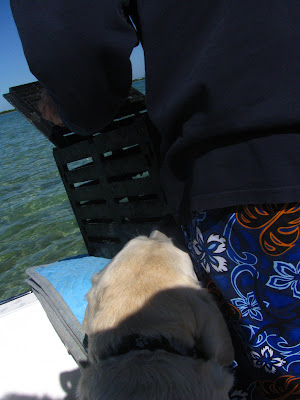 The stone crabs seem quite fond of their own claws but Wayne was merciless, especially after one bloodied him slightly. He wrestled and wrangled the claw until it broke off with a succulent crunching noise. The wounded crab was tossed back as Wayne gloated over his single remaining claw. 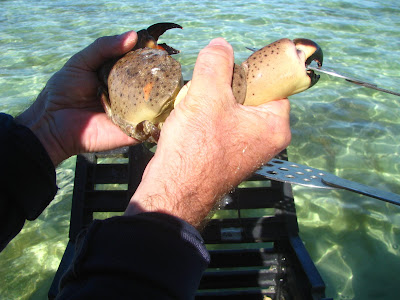 The tongs you see in the pictures were wielded by Chuck though I don't think commercial crabbers routinely put to sea in aprons using kitchen implements to retrieve their catch. 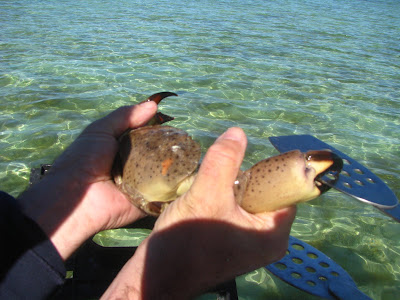 It all reeked rather of the don't ask don't tell approach to hunting food. 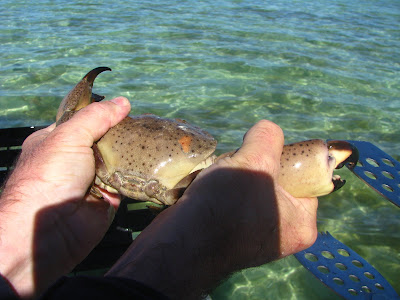 The last putrid pig's trotter lay in the bottom of the pot. 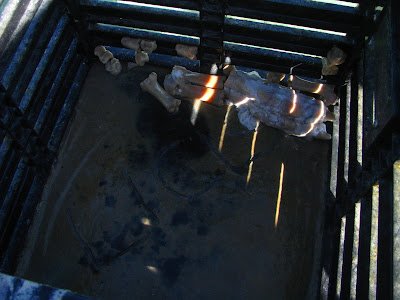 A new frozen pig's foot was added to entice new crabs to the pot and the whole mess was tossed back. Good riddance in my opinion. 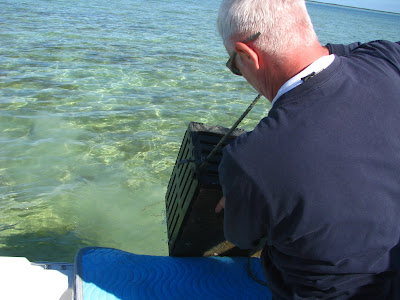 Wayne is enormously proud of his polka dotted floats- the "R" is a Florida requirement to indicate the trap is of the "recreational" variety. Poaching traps is a criminal offense and is treated extremely seriously by the state. 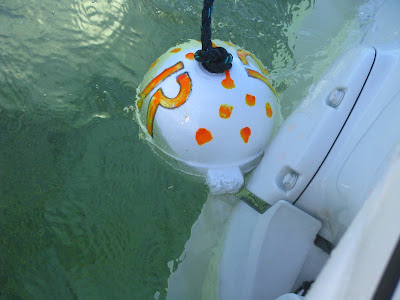 Poaching gets up to a ten thousand dollar fine and you can expect jail time as well. Thus were we to be seen lifting non "R" traps one might be moved to consider us poaching as clearly we weren't remotely like a commercial trapping operation. Especially as we came perilously close to trapping our own buoy in the prop... 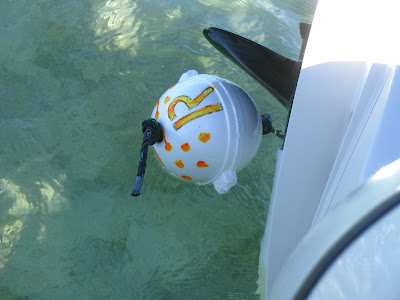 There it was floating in four feet or so of water. 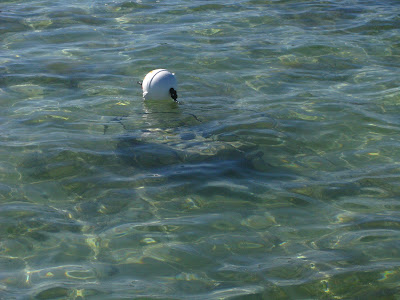 Zuzu and Tootie were also interested, especially as they are the dogs of the blog: http://zuzuandtootie.blogspot.com/2010/11/crab-traps.html 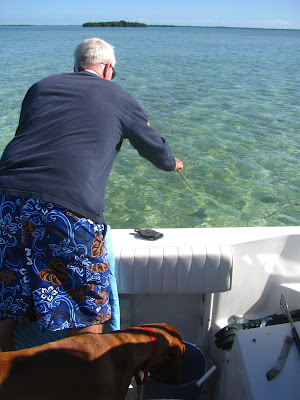 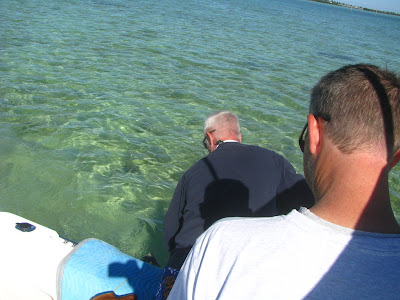 And so on, four more times. 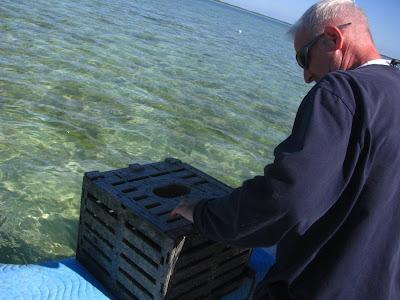 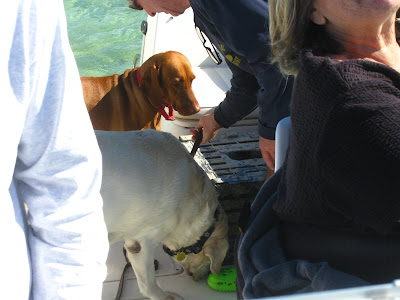 Cheyenne located the true source of happiness on the boat which was the bag of frozen pigs' trotters. 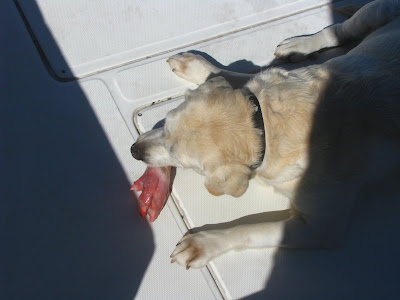 Unfortunately they sell the feet in packs of five to match the number of pots allowed per license...so my dog had to give up her prize. My wife looked rather old fashioned at me when I suggested maybe we should stop at E-Fish on the way home and pick up a package for her. She looked to me like she was a dog that enjoys gnawing on frozen pigs' feet. 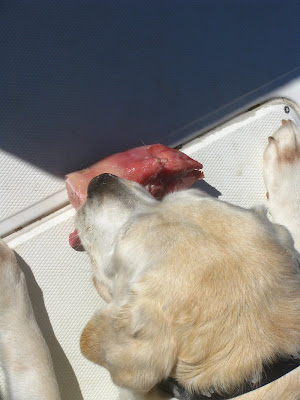 And that black box was where the trotter ultimately went. 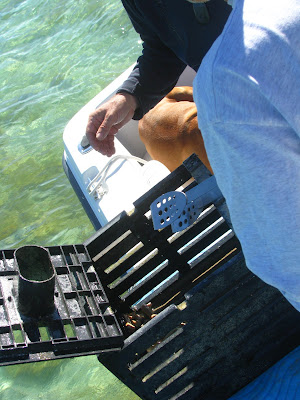 This crab was too small for the pot. 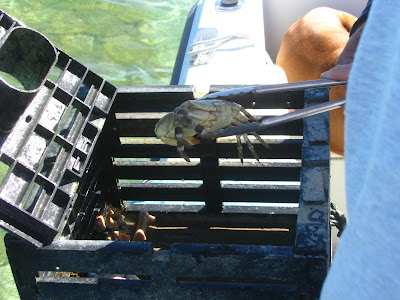 This one was destined for the steamer. 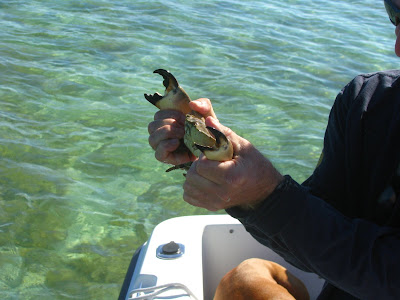 Stone crabs are one of those delicacies I find it hard to wrap my mind around. You tear the flesh from the living crab, boil the shit out of it and then let the meat chill. Then you crack the shell and dip the meat in mustard sauce. It sounds to me like the sort of meal that takes more calories to eat than it produces. As a survival technique I doubt this sort of foraging is worth it. Cheyenne likes crabbing. 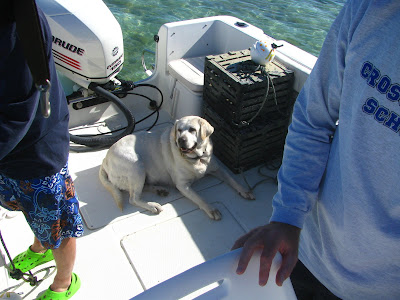 Wayne calls Chuck Captain Crabby when they are out on the boat. Perhaps, considering my disdain for the exercise it should be bestowed on me.
Posted by Conchscooter at 12:01 AM 11 comments: Links to this post