Scooters Originali, Or Four Days On The Road

Last Sunday I left home fairly late, it was close to eight in the morning, a gray cloudy day, with a promise of rain and a twelve hundred mile trip to Allentown, Pennsylvania. City of Allentown - PA - Official Site the third largest city in Pennsylvania they say. Who knew? 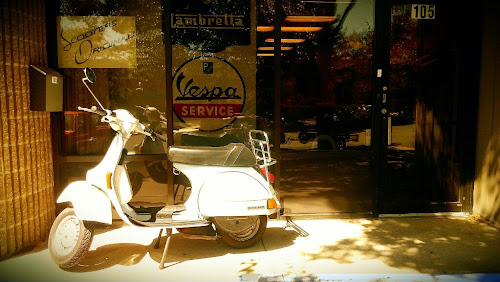 As far as I can tell Allentown is a freeway crossroads not far from Philadelphia, New York and Washington D.C. Which, if you operate a vintage scooter restoration shop probably means you have a wide customer base. Some idiot showing up with a 34 year old Vespa in tow probably is no big surprise to Gene, but I felt quite surprised to have made it after two long days of towing my scooter, and my dog, across eight states and the District of Columbia. 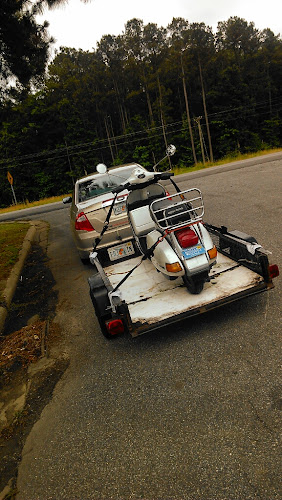 I found out about this shop on the Modern Vespa forum and the reviews were fulsome, a fact that made me nervous and hopeful at the same time. I have the theory that a well sorted vintage Vespa 200 can be like-new factory reliable and would make an excellent low cost commuter. I've tried the Indian equivalent, the Stella built by LML in India, and found it hopelessly badly built. I tried the modern Vespa a high powered super sophisticated 250 GTS and it couldn't hack it, suffering an unendling list of electrical problems. So this 34 year old kick starting, no battery supplied, magneto powered aluminum hum-drum sheet metal two stroke should be capable of giving my ever reliable Triumph Bonneville relief from daily duties? In a word: I hope so, or better yet I think so. Gene, with twenty years experience fixing these things agrees it can be done. It will be done. 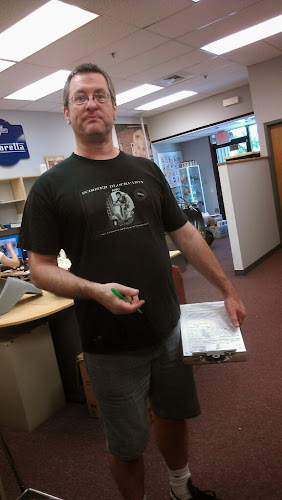 I left home Sunday morning then, towing my scooter, my dog on the back seat and my heart heavy with concerns, despite my wife's support for this crazy unlikely venture. We were to be in Allentown Tuesday morning when the shop opened and hopefully I would be there in one piece and I would like and trust Gene and one more piece of this crazy sight-unseen scooter transaction would fall into place. Travel with trepidation I guess. My dog didn't care, she was on the road with her Dad which made her happy. 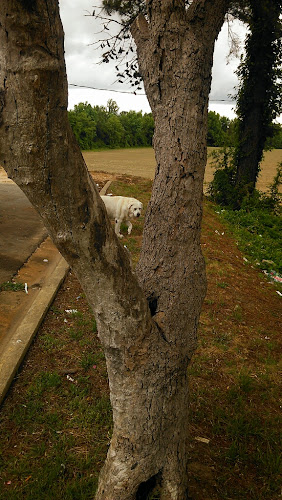 We drove through rain, we listened to Sirius, the glorious satellite service with everything you could want on your car radio, NPR talk, books on tape, every kind of music world news and on and on as the miles rolled under the car at 65 per hour with the trailer trundling behind. Slow and steady wins the race I mumbled as I watched the unencumbered cars whizz by in the fast lane, at least I saw dark shapes flitting by in the thundering summer downpours. 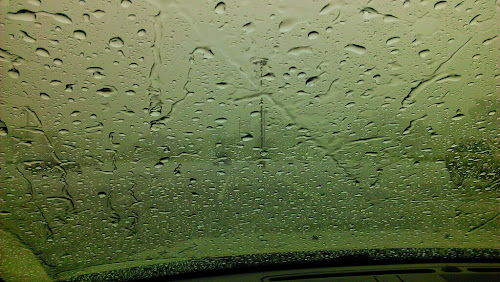 Did I mention my dog was happy? 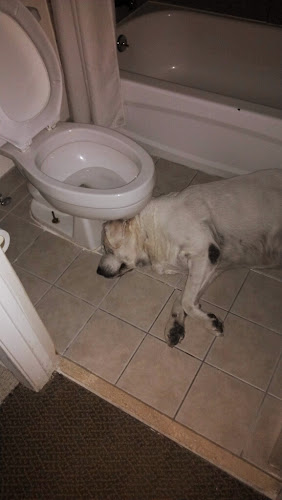 I got goosebumps standing in the brisk morning breeze on a grassy hill outside Allentown on a bright fresh Tuesday morning. We had survived miles of open freeway, horrid bumps on Washington's dire surface streets and ruinously expensive toll booths on "freeways" claimed as turnpikes in Maryland Delaware and Pennsylvania... And here we were, Cheyenne, the Vespa and I in the very same turnpike service area where I met the infamous Jack Riepe a few years ago after I rode my last Iron Butt venture to New York's Catskills. Everyone else was in t-shirts this Tuesday morning, sweating in the sixty degree heat and I got embarrassed enough I took off my padded vest and pretended I too was hot, despite the goose flesh as I shivered while my dog got a new friskiness in the cool morning air and the fresh greenery of the Quaker State. 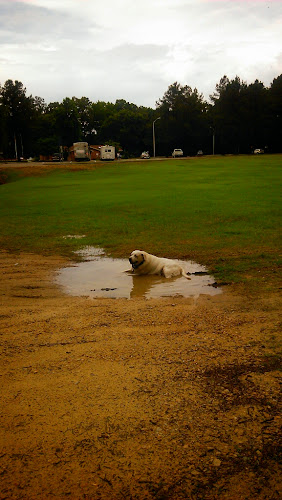 We took a tour of the incredible scooter shop and my fears started to dissipate. Restoring my faded 1979 to factory fresh spec doesn't look much compared to these projects in waiting. 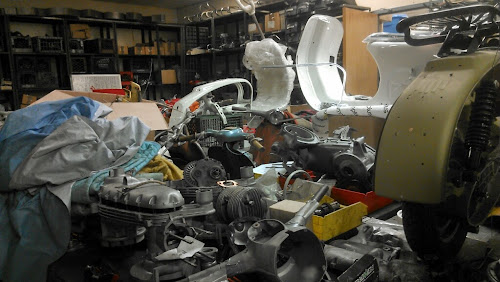 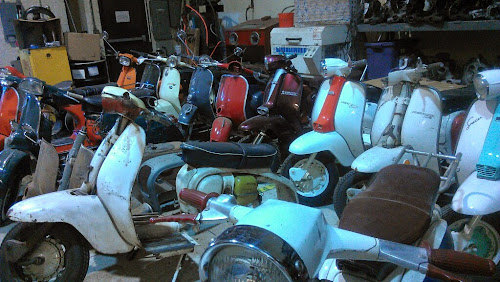 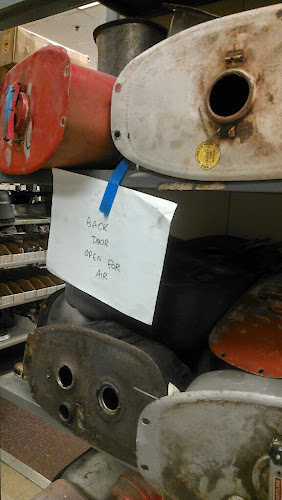 Gene started peering at my Vespa and he got a little restorer's woody, "Hmm," he said. "This doesn't look right. It's not supposed... Hmm, " he puzzled poking a tin box in the ignition system inside the spare wheel well. "Is this a Euro spec..." the thought unfinished as he tried to figure where in the spectrum of the New Line Vespas my metric hybrid fitted. I got the impression he is quite looking forward to unraveling the puzzle of this two wheeled detective tale. 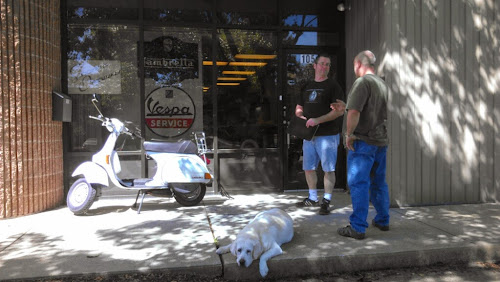 Clearly he knows more about these things than most people, so I gave myself up to enjoying the piles and heaps of scooter things he lives and breathes and fixes. Lambrettas, one found factory new with 300 miles on the clock, perfectly stored in a New Jersey garage for decades and sold for "a pittance." This is the perfect place for it to call home. Scooters Originali. Vintage Vespa and Lambretta Specialists. Mail order Parts and Restoration 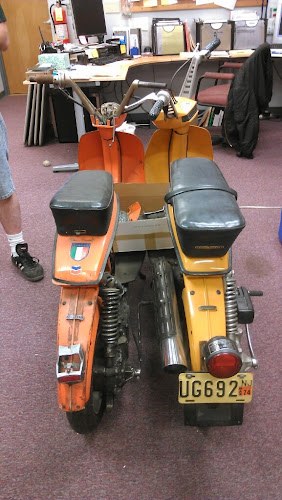 Vespas too. Gene prefers the style and lower seating on older Vespas. He's not wrong but I want my daily rider to have the attributes of the New Line more modern angular Vespas. We pondered for a while the possibilities of a new more powerful engine expensively transplanted into an older prettier Vespa. 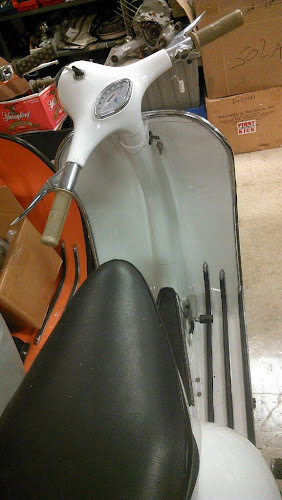 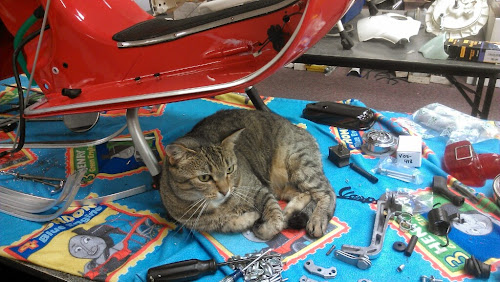 And the office, a family affair. 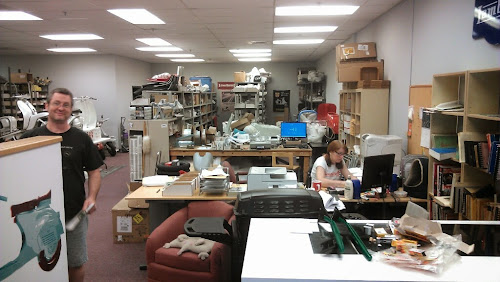 Them and their stray cats, fed, and adopted and none too happy to see my Labrador peering in the door looking for me. 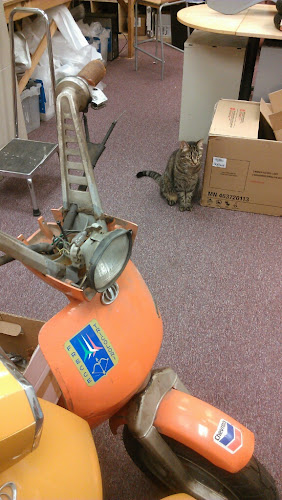 I signed the estimate for new wiring, cables and engine work as needed with a delivery date of "several months" and went off to find a place to store my trailer for an unencumbered return trip. There's a university in Allentown that just got out for summer and students had taken all the space the not terribly interested storage clerks told me until I came across one place where an enterprising dude in Trexlertown said we could give it a shot. So we did though I still have no idea where Trexlertown actually is. Route33 Self Storage, Keystone Self Storage, Trexlertown Self Storage at Pennsylvania. 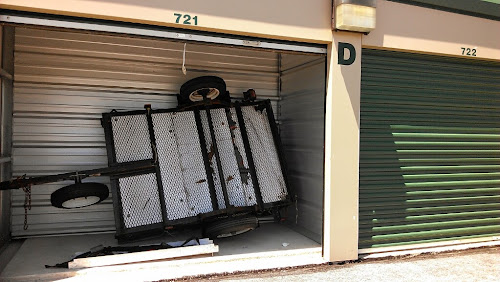 I'd never have found the place except I looked it up on my android phone's web connection then tapped the phone number on the website to get an automatic phone connection (!) then I used the GPS in my phone to navigate straight there through lovely Pennsyvlania countryside. Amazing modern technology! 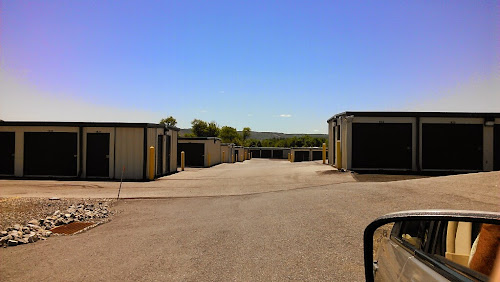 Sixty bucks a month until I return, probably in October. And so we drove off to Florida but first a walk for my long suffering dog. 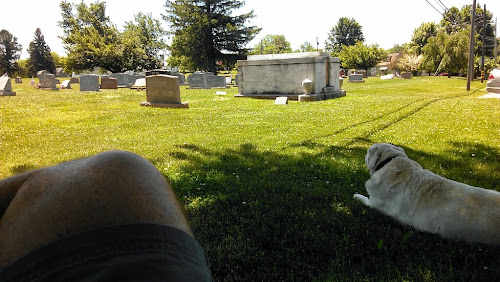 And so home, with more stories to tell at some later date no doubt, back to Florida sunshine just as I had left it four days earlier, loaded back then with scooter, trailer, dog and hope. 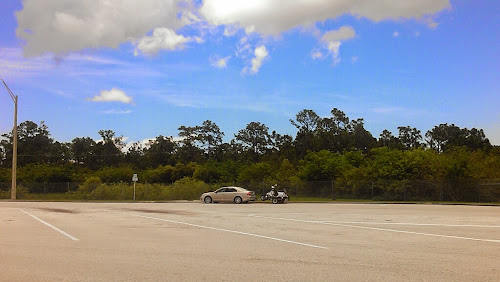 That went well. Now back to work.