Industrial Art on the island of stock, the island through which all traffic to and from Key West drives, home to worker  housing, light industry, warehouses and body shops. 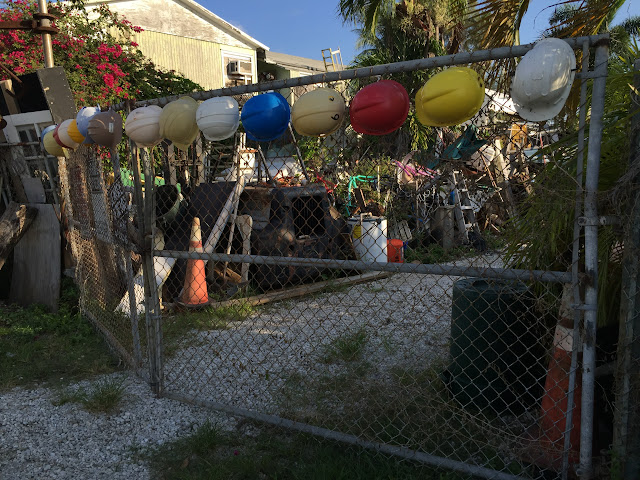 The Rusty Anchor used to be the home away from home of people who grew up around here, the Conchs, natives of key West. 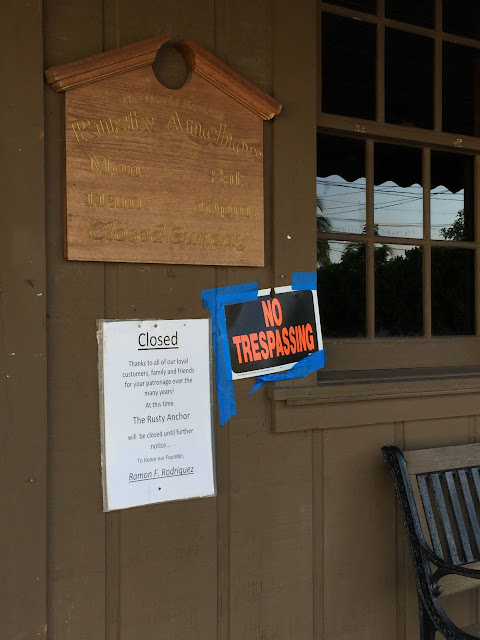 It's closed but it';s sign is still there and there are rumors from time to time that some new entrepreneur may be angling to reopen it. I dare say Roostica has taken over as the preeminent Conch eatery on Stock Island and I for one prefer it. But this was a piece of history that closed. Too bad. 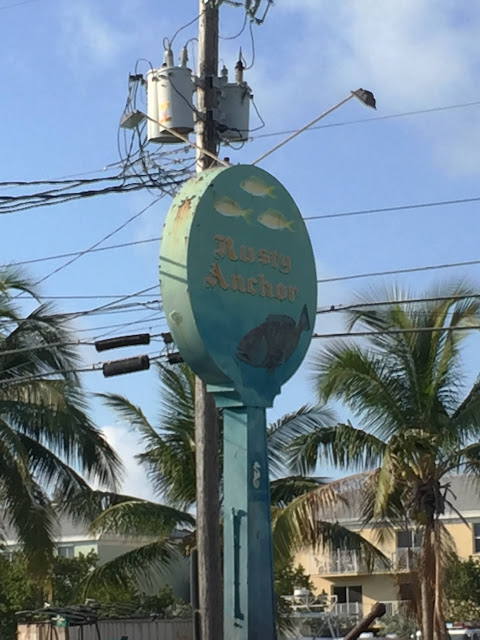 "Pirates Paradise."  People do love their Key West pirates and you will find them everywhere except in the history books. Key West has actually been home to respectability and hard work far more often throughout it's past than modern tourist literature would have you believe.  For the longest time it was the most prosperous city in Florida, thanks to shipping and trade. 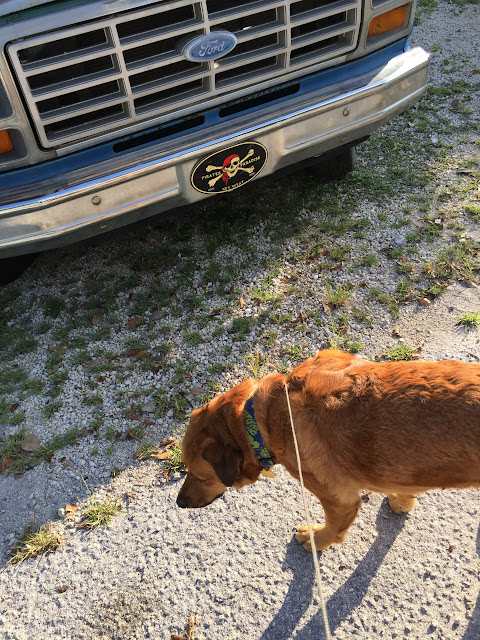 Stock Island is being bought up be developers and for as long as I can remember rumblings of imminent change are always swirling around in the atmosphere. Aside from some shuffling around in the world of marinas two of which are planning hospitality expansion, the rest of the island pretty much stays the same. 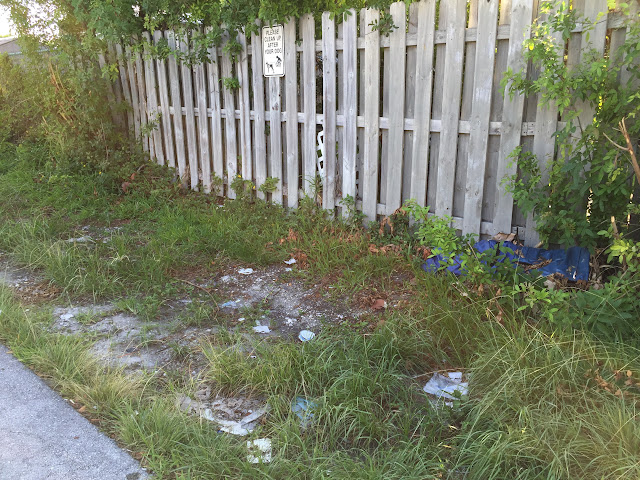 It's unincorporated, a part of Monroe County, only College Road to the north is actually in the city of Key West. Sidewalks are few, puddles, trash and unkempt grass are the order of the day across much of the island. Stock Island generates loyalty as it is the holdout for truly affordable, if not always pleasant housing close to key West. 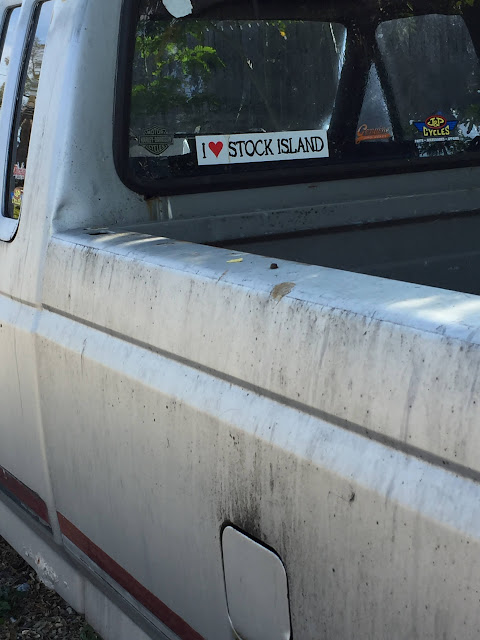 There are expensive houses here on small lots bounded by trailers of all sorts of decrepit vintage. 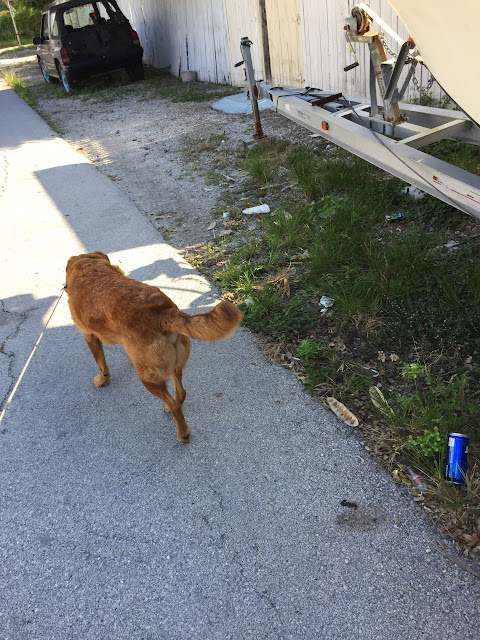 Urban planning is a lost art on this island where they used to graze cows which would be shipped to Rest Beach from time to time and there slaughtered to supply the city of 12,000 inhabitants that was Key West in the 19th century. 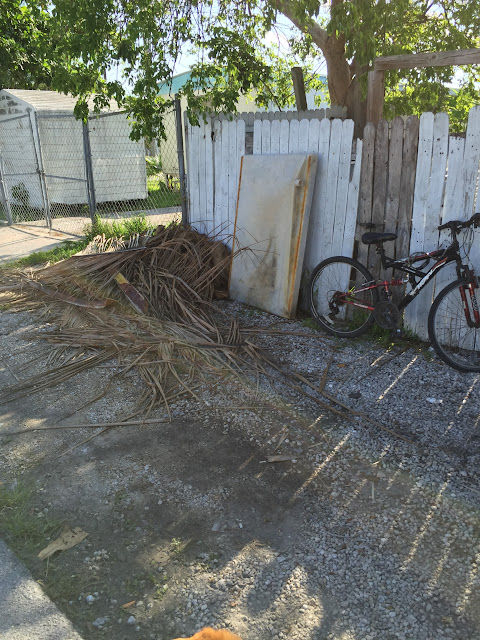 On my gloomy days Stock Island seems to fill that same quota, providing brawn to clean hotels, maintain services and sell food. In the morning you will see fleets of people cycling into Key West alongside the impressive lines of workers displaced by high rents to the outer islands of the Lower Keys. All of them, on the street and on the sidewalks flow into Key West to do the  work that won't pay the astronomical rents in the city. Housekeepers and servers that keep tourist infrastructure going live here: 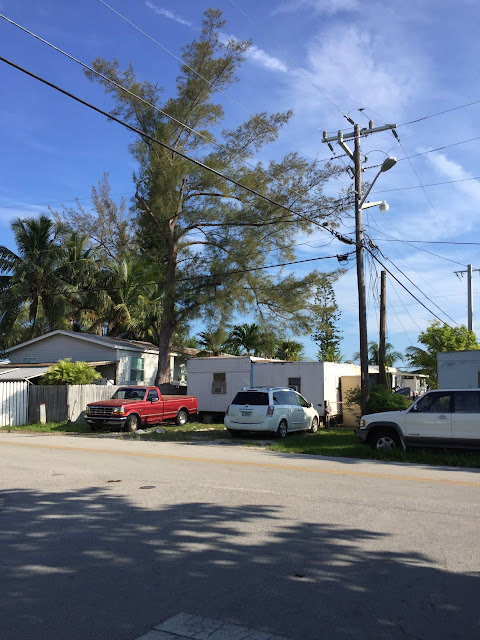 Development plans are always in the air and sometimes in the newspaper. It is counter intuitive when the city keeps proclaiming piously that affordable housing is the biggest challenge. These trailers are vaguely affordable though they too are under threat. 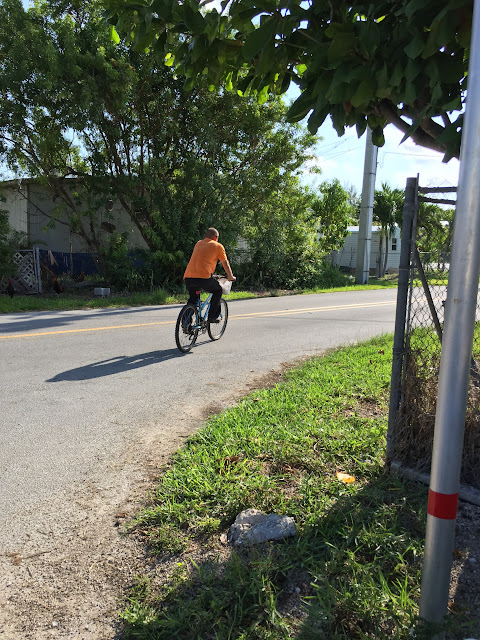 Chickens run loose here, far from the tourist clap trap about them being imported romantically from Cuba. Chicken fighting has long been a  source of gambling and it still goes on, though more or less in secret as torturing birds is considered a bad thing and is thus illegal. Fights have been reported for ever in the Lower Keys but I don't think visitors would like to know why youngsters on mopeds can sometimes been seen scooping up roosters and whisking them away to be mutilated and set to fight. 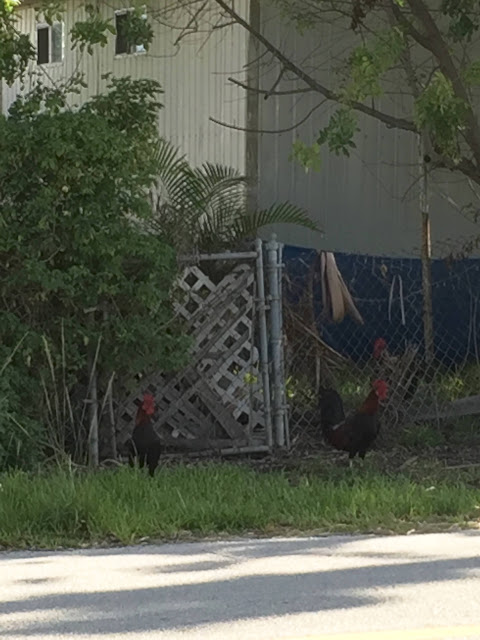 There are more expensive homes here and decent apartments along side the trailers.  Rusty, like Cheyenne before him, enjoys this place filled as it is with smells, some a lot less salubrious than others. 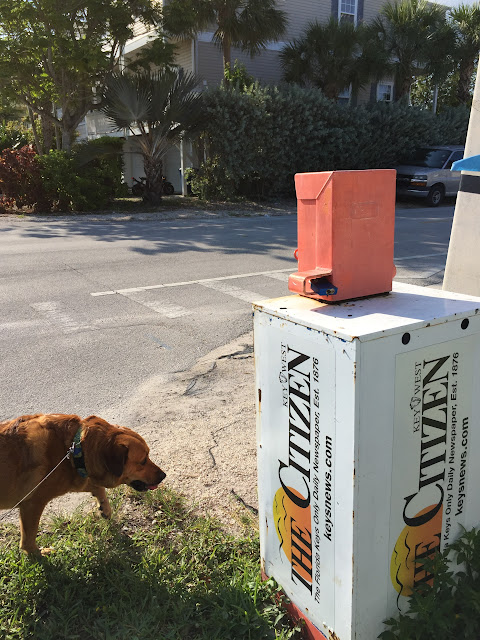 Cheyenne who died of ripe old age four short months ago feels like she has been gone forever. I miss her even as Rusty grows into a great dog in my life. She loved poking around Stock Island and would walk herself into a coma exploring here: 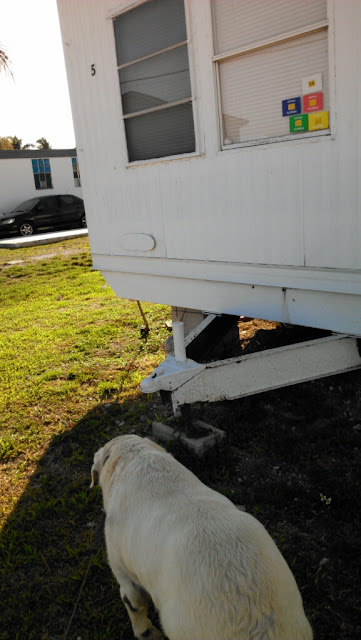 Cars parked apparently with no hope of movement as they lack even basic license plates: 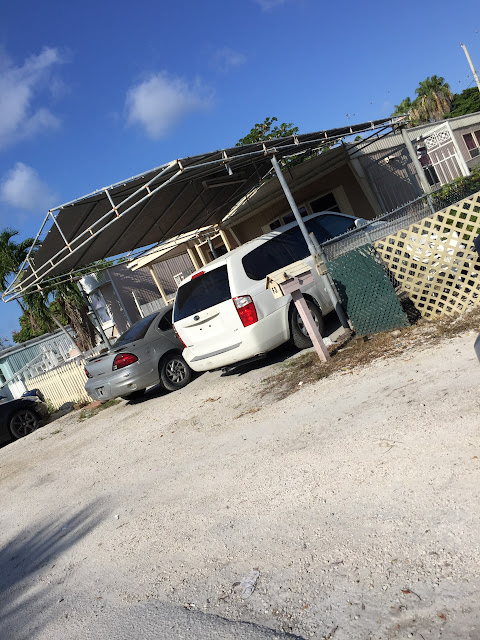 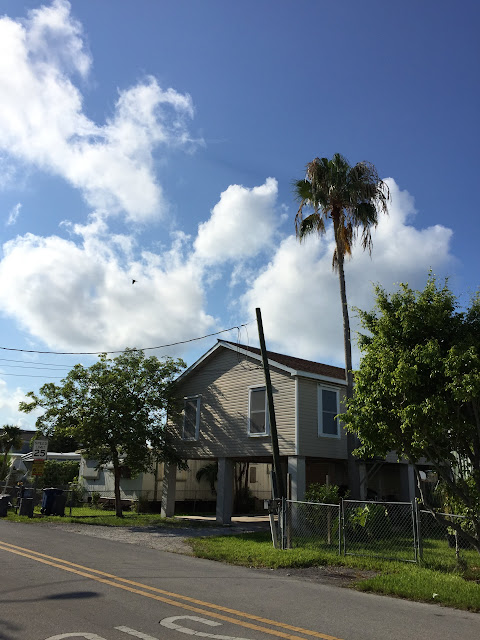 Old fashioned mobile homes, immobilized by the passage of time: 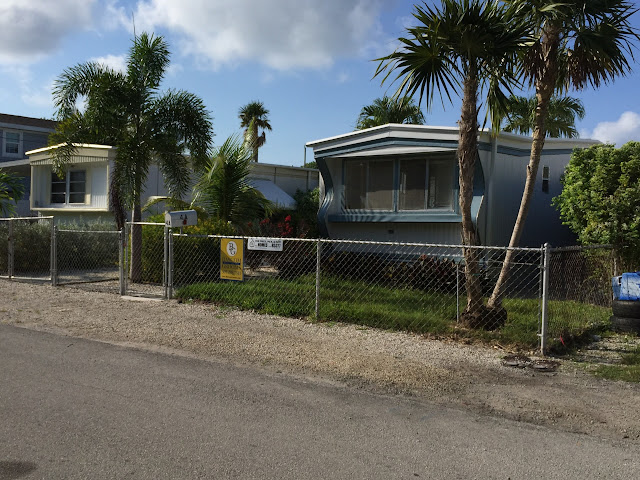 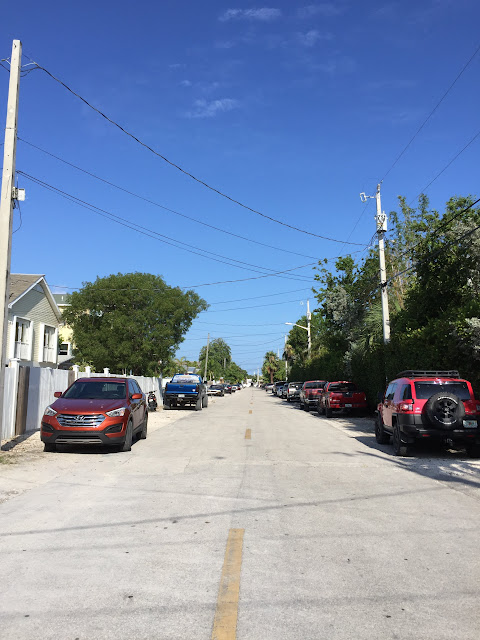 Rusty walked an hour and a half under a blazing sun which produced 90 degree temperatures during breakfast time. My wife was coming to pick us up so I improvised a drinking bowl from a trash can and put water in a plastic bag at a public faucet and he lapped it up: 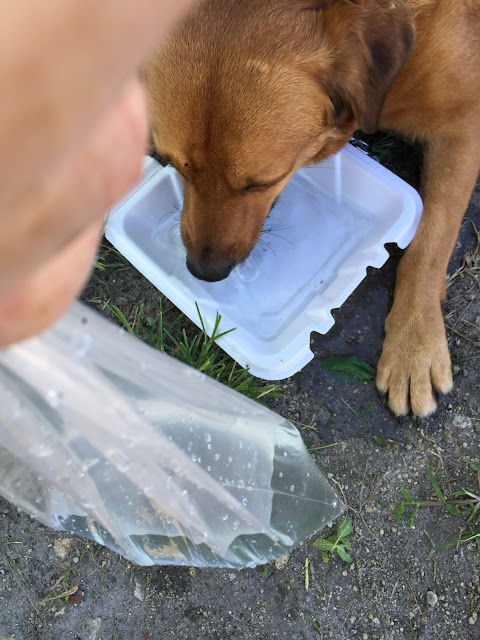 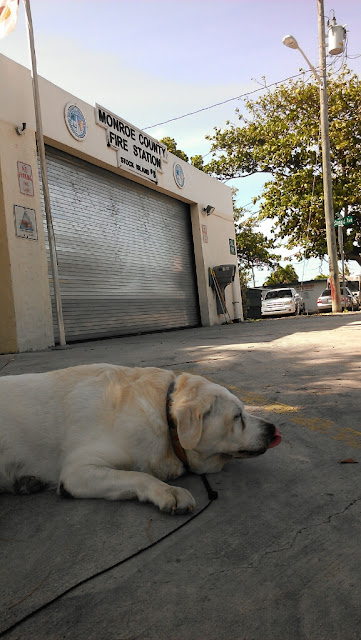