We are on the road tomorrow and I am ready. I have had a grand time hanging out with northern cousins and I'm looking forward to coming back next Fall when we drive south from Alaska, but I have to say the road life suits me as much as I expected it might. More friends to visit but more road miles to mash as well. Excellent. 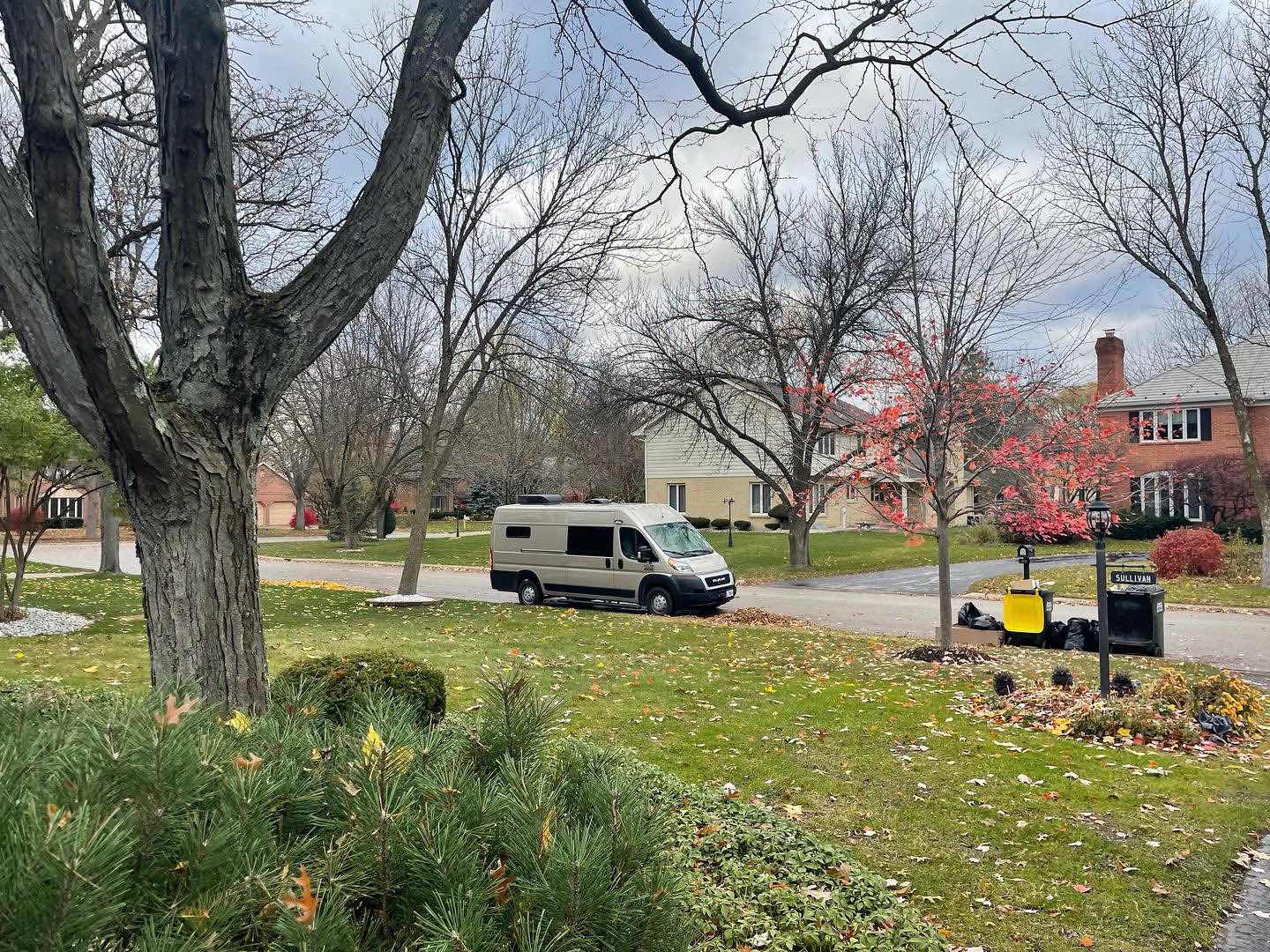 I crept out of the house this Moochdocking Tuesday morning and walked Rusty as far as he wanted to go through this neighborhood where fences and trash cans are not allowed, where leaves are neatly piled in the gutter and lawns are properly mowed. 32 degrees is too cold for me but for a few days its an enjoyable change. 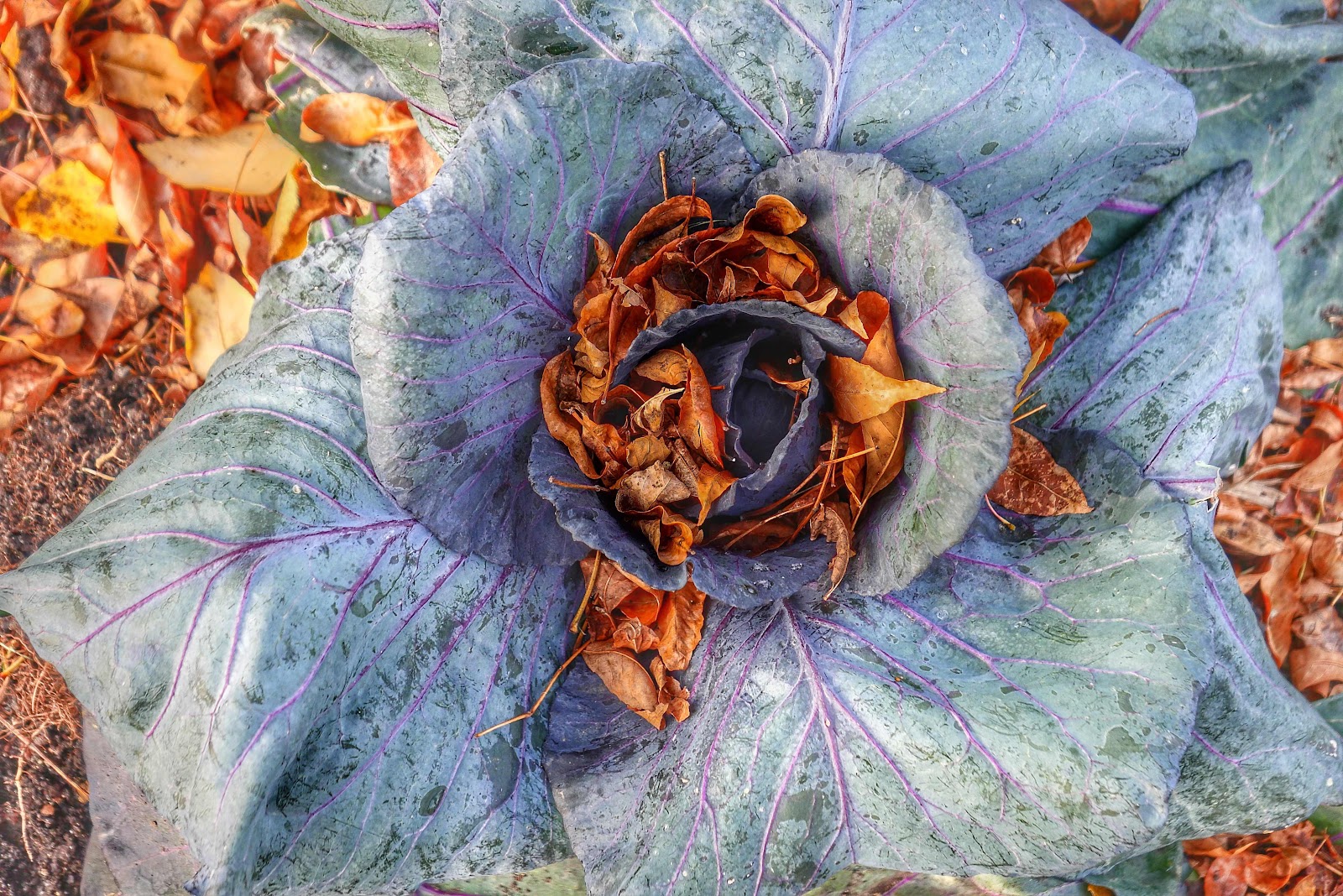 The end of season vibe is strong here with leaves changing color and falling everywhere but I still have the sensation of being on vacation. We are hoping to cross the Mississippi at the beginning of September, breaking new ground as it were aiming for central Texas and later the Big Bend. It will be a return to van life after finishing our last goodbyes. Poignant but necessary goodbyes. 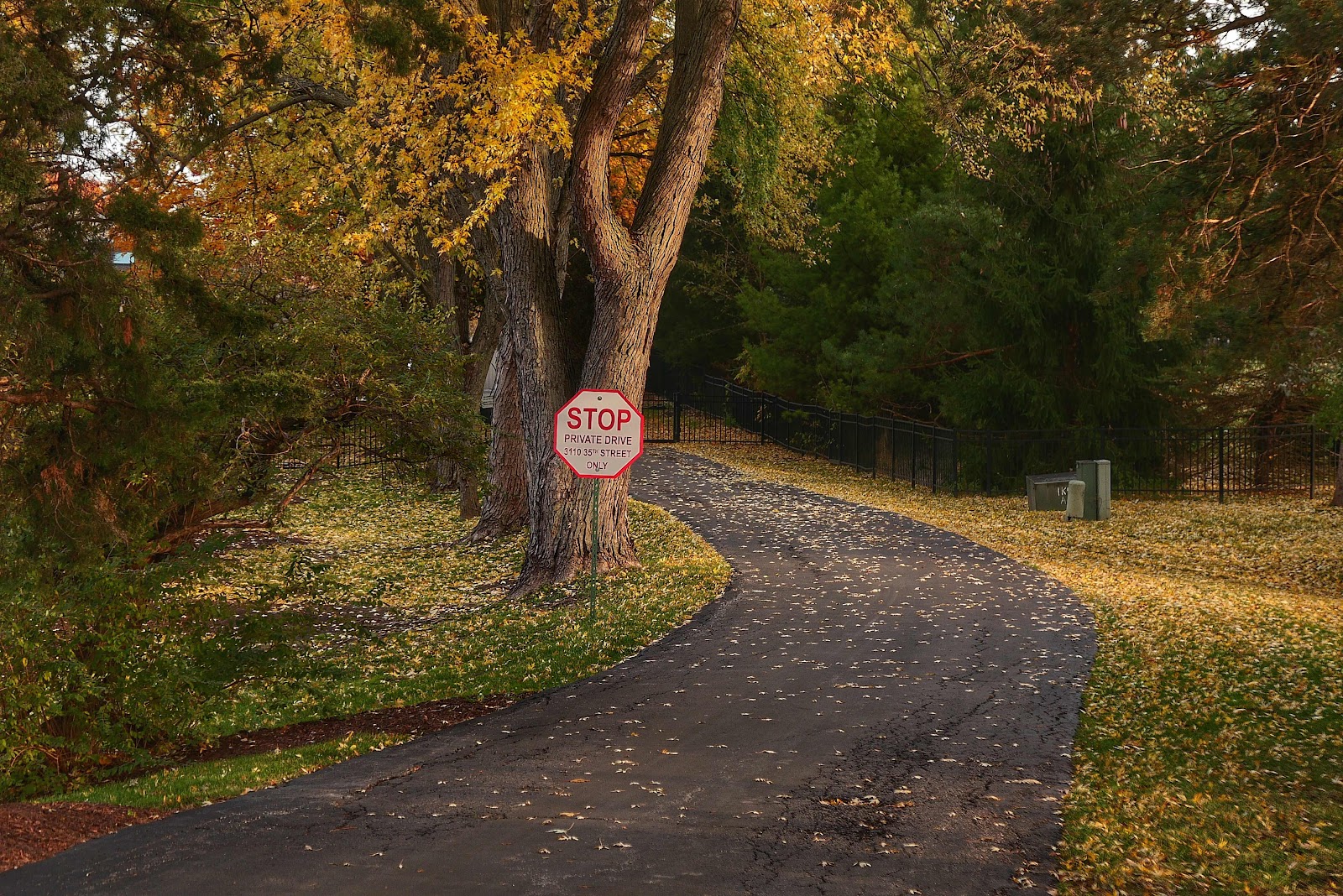 Monday was a work day in the neighborhood chased by a single trash collector in his automated truck, heated closed cab and all. We paid a fair few tips to our trash guy in the last weeks as we piled stuff at the curb in the October heat. 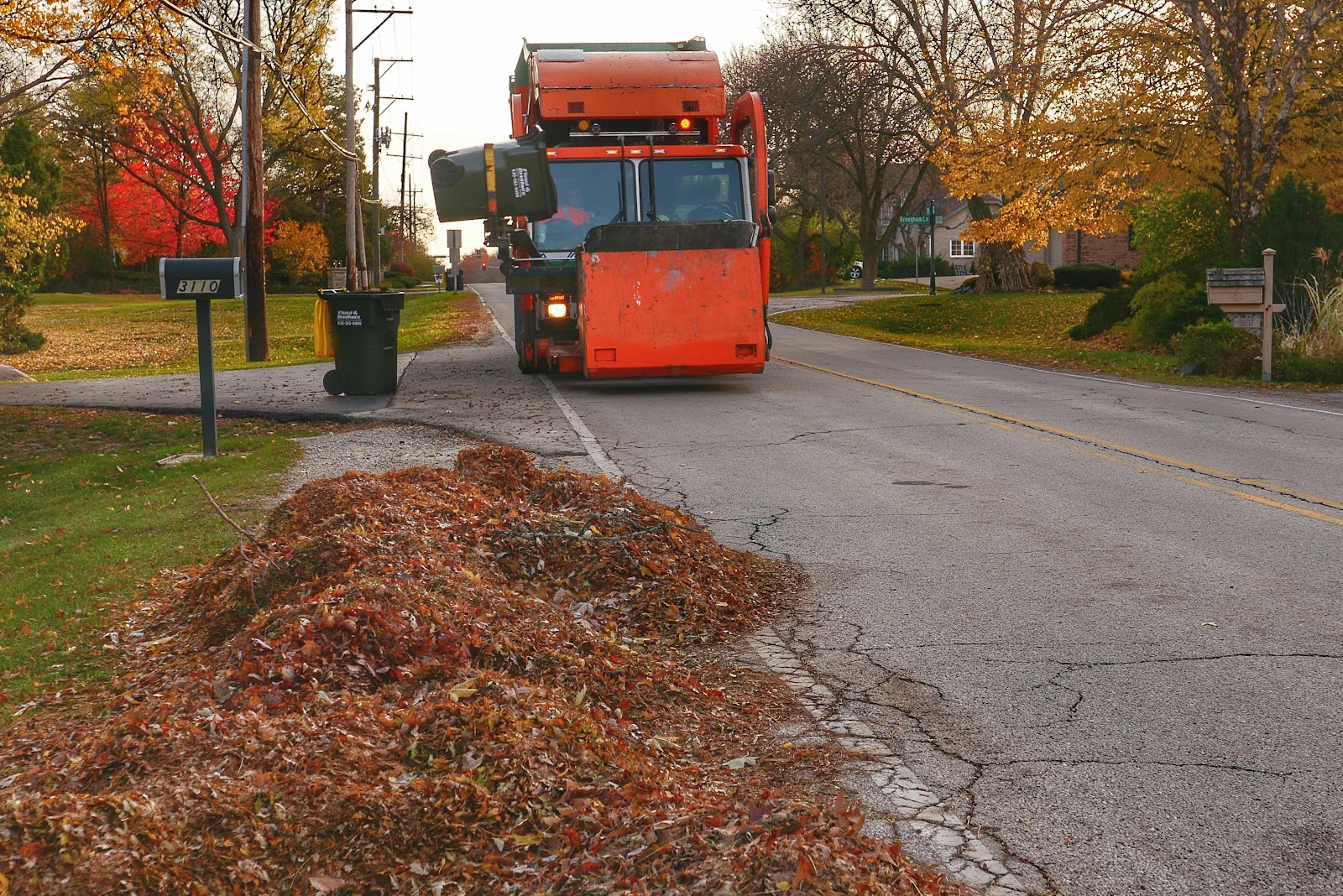 After the collection that recycling cans with yellow lids and the trash with green lids disappear out of sight into garages, by local rule I'm told. 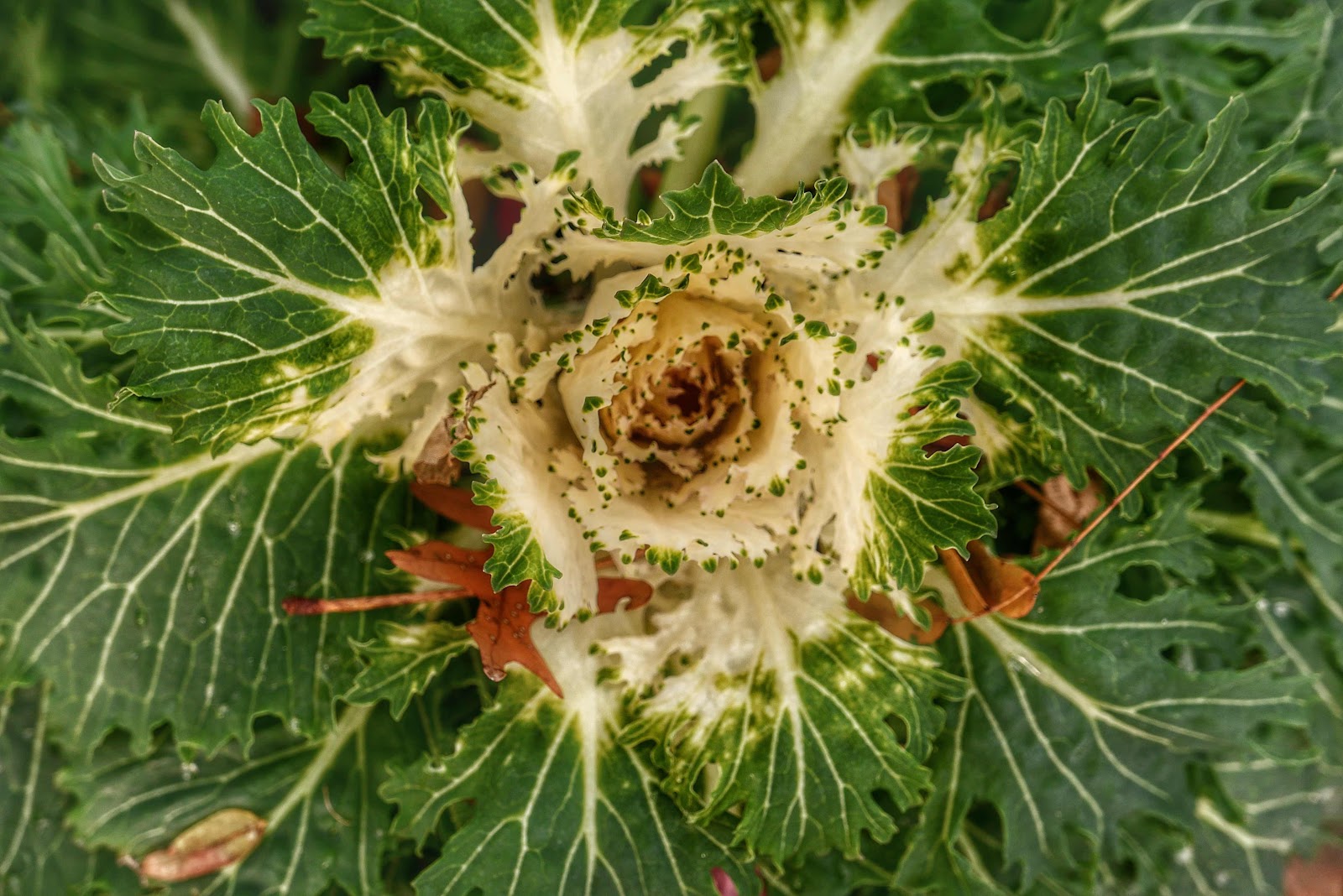 I have read that the best thing to do with the fallen leaves is to mulch them back into the soil as nature intended but around here they follow the modern fate of disappearing in the name of tidiness. One can only suppose they will eventually go back to the soil by some devious path. I hope. 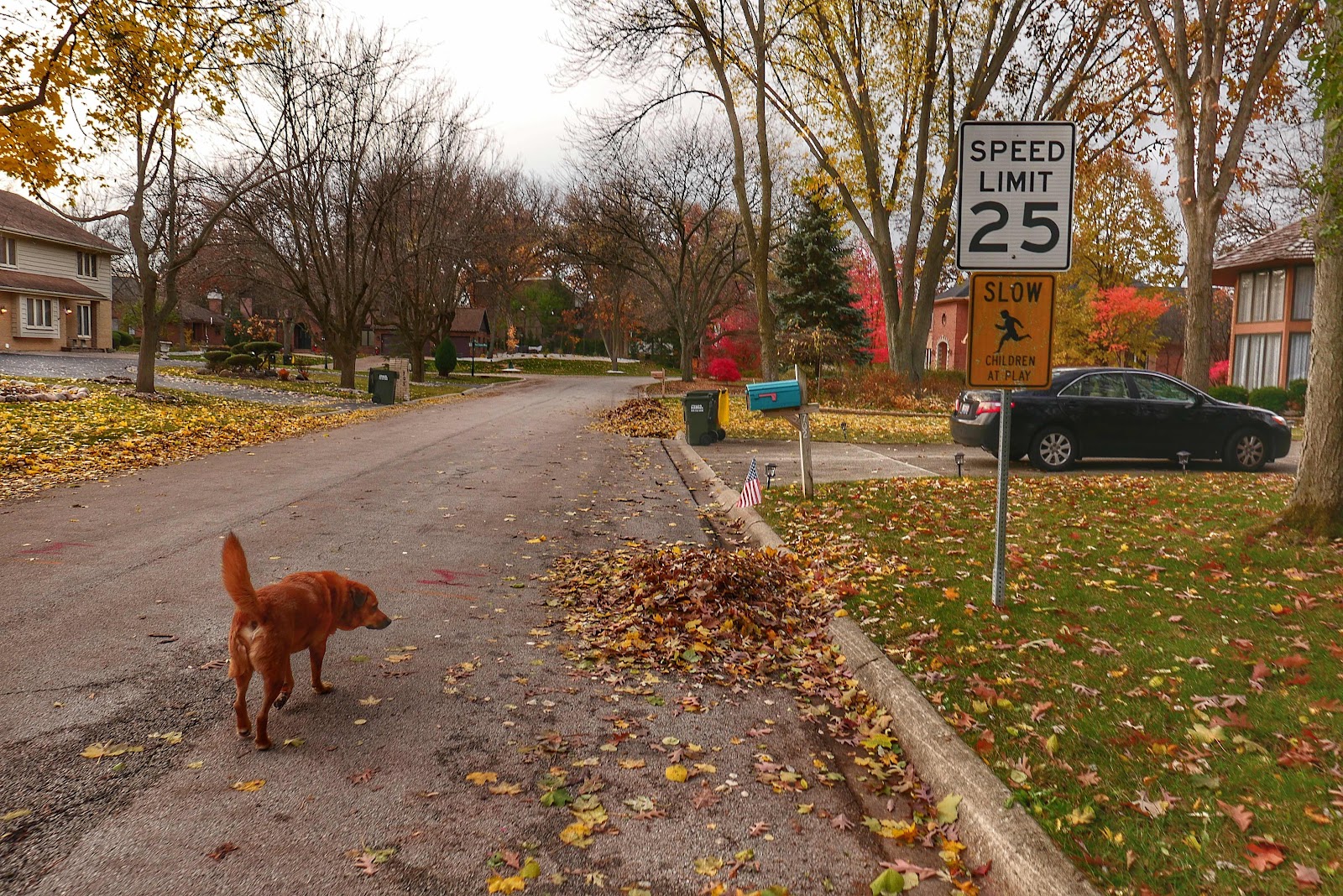 Rusty was walking slowly and carefully eyes wide open in case other dogs might appear.  One loud barker came on a front lawn held at bay by the permitted buried electric fence. Rusty ignores barkers and wanders on in silence. 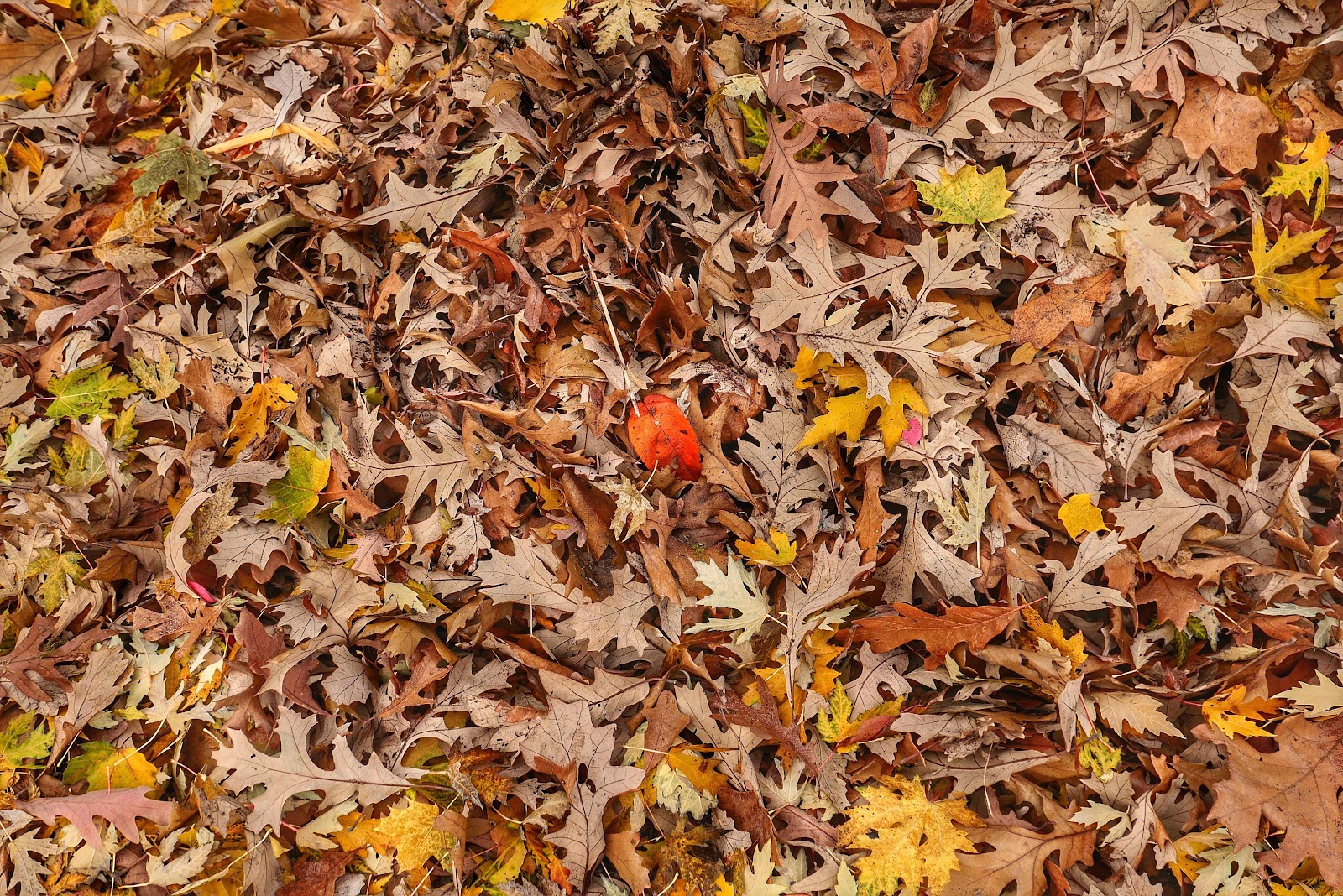 I don't know why, but I was slightly surprised to see a school bus in such an adult oriented community but there it was: 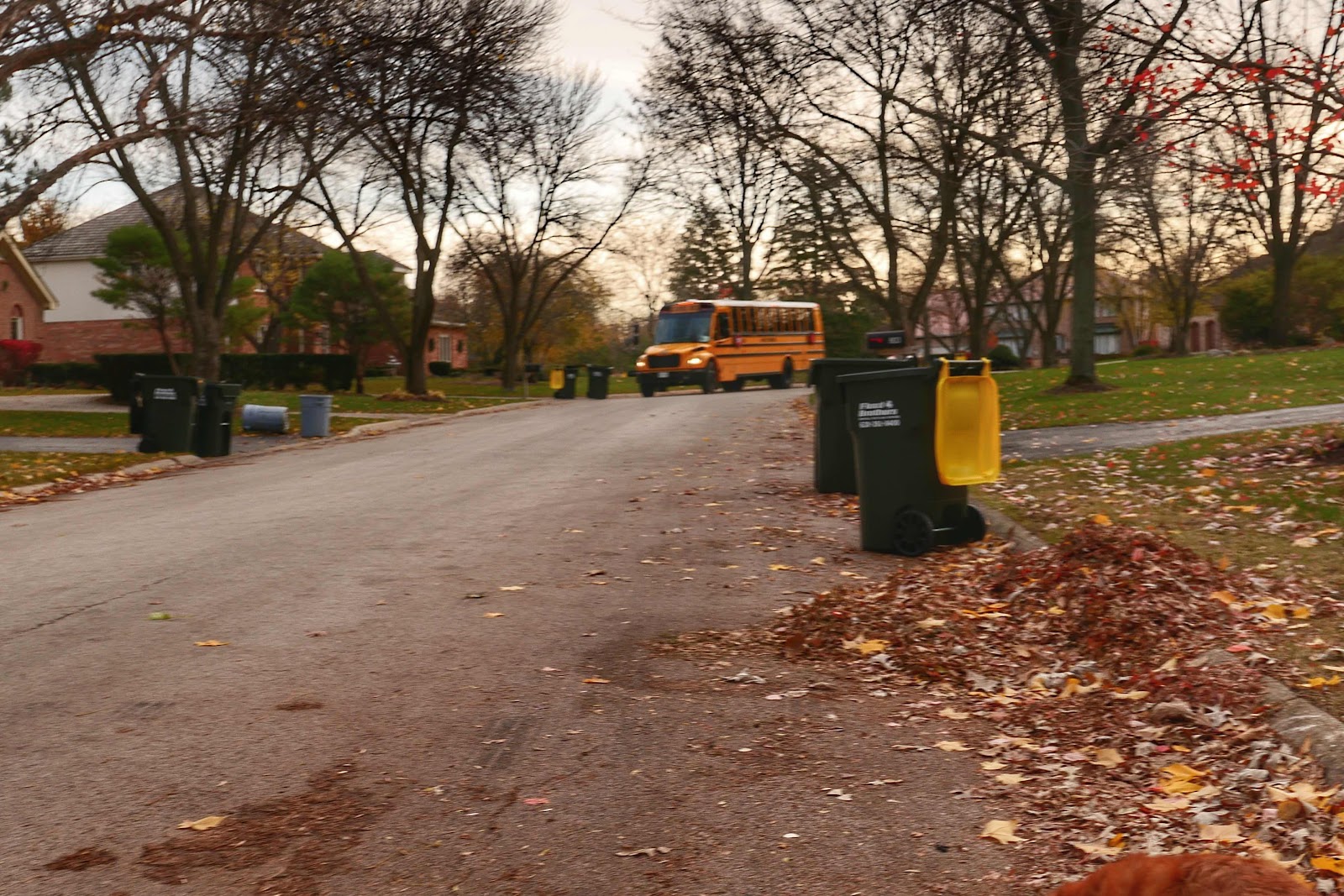 I saw lots of decorative cabbages and I'm not sure what they are but they look just right among the leaves. 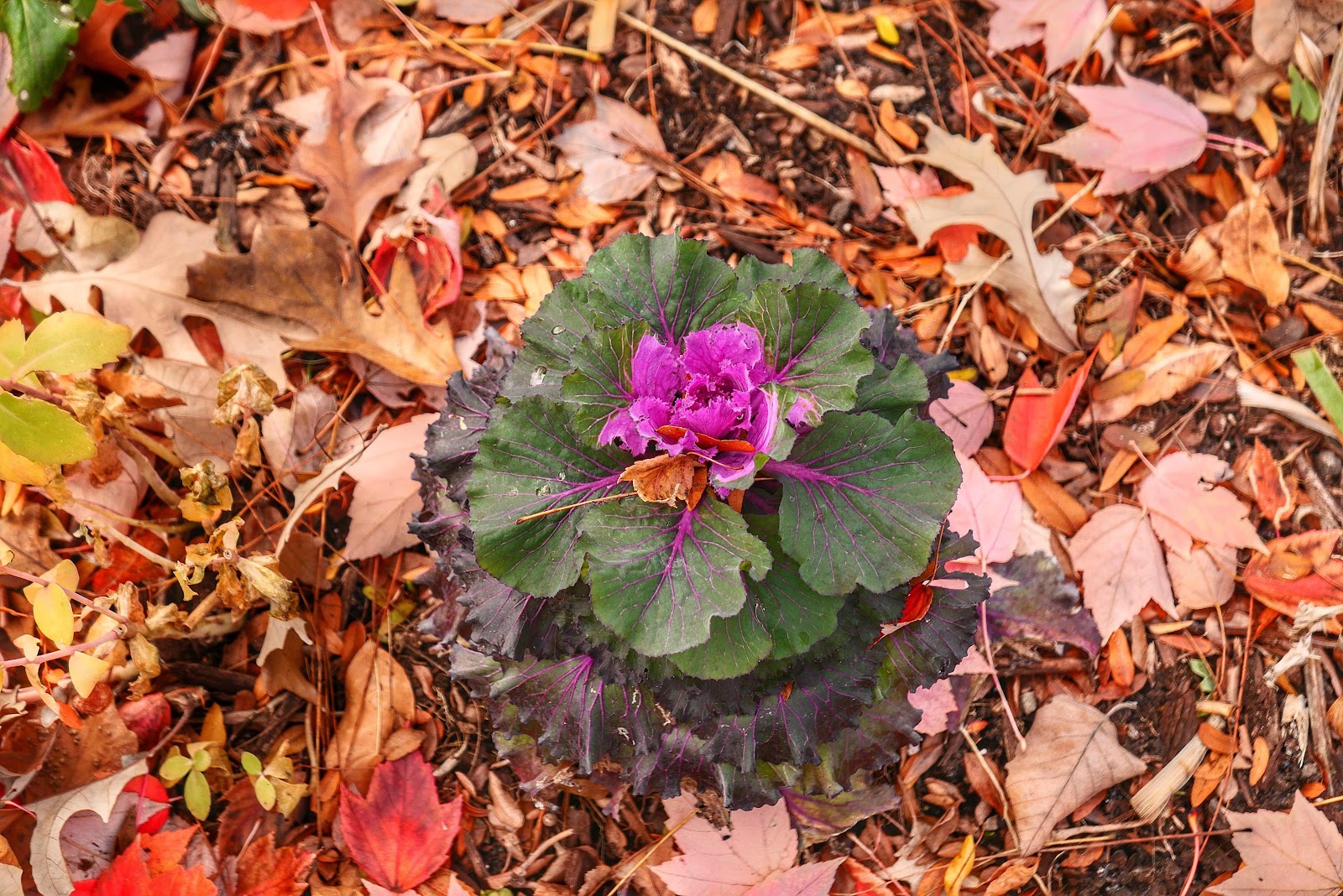 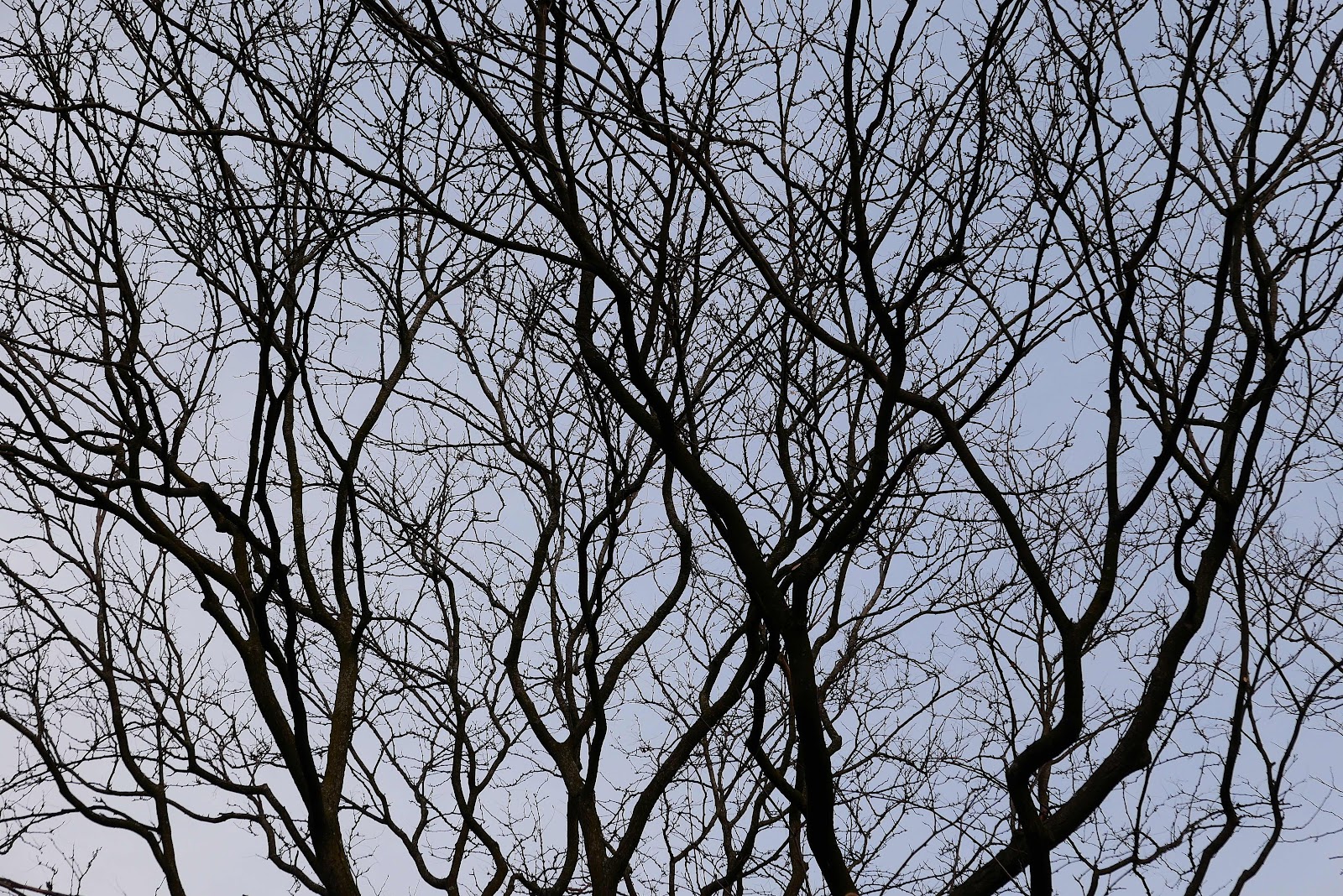 Rusty was ready to get back indoors. He doesn't seem to feel the cold but he loves hanging in Lynn's home. She is completely easy and he has a selection of couches, carpeted rooms, my bed, his bed and so forth. I shall pry him back into the van tomorrow... 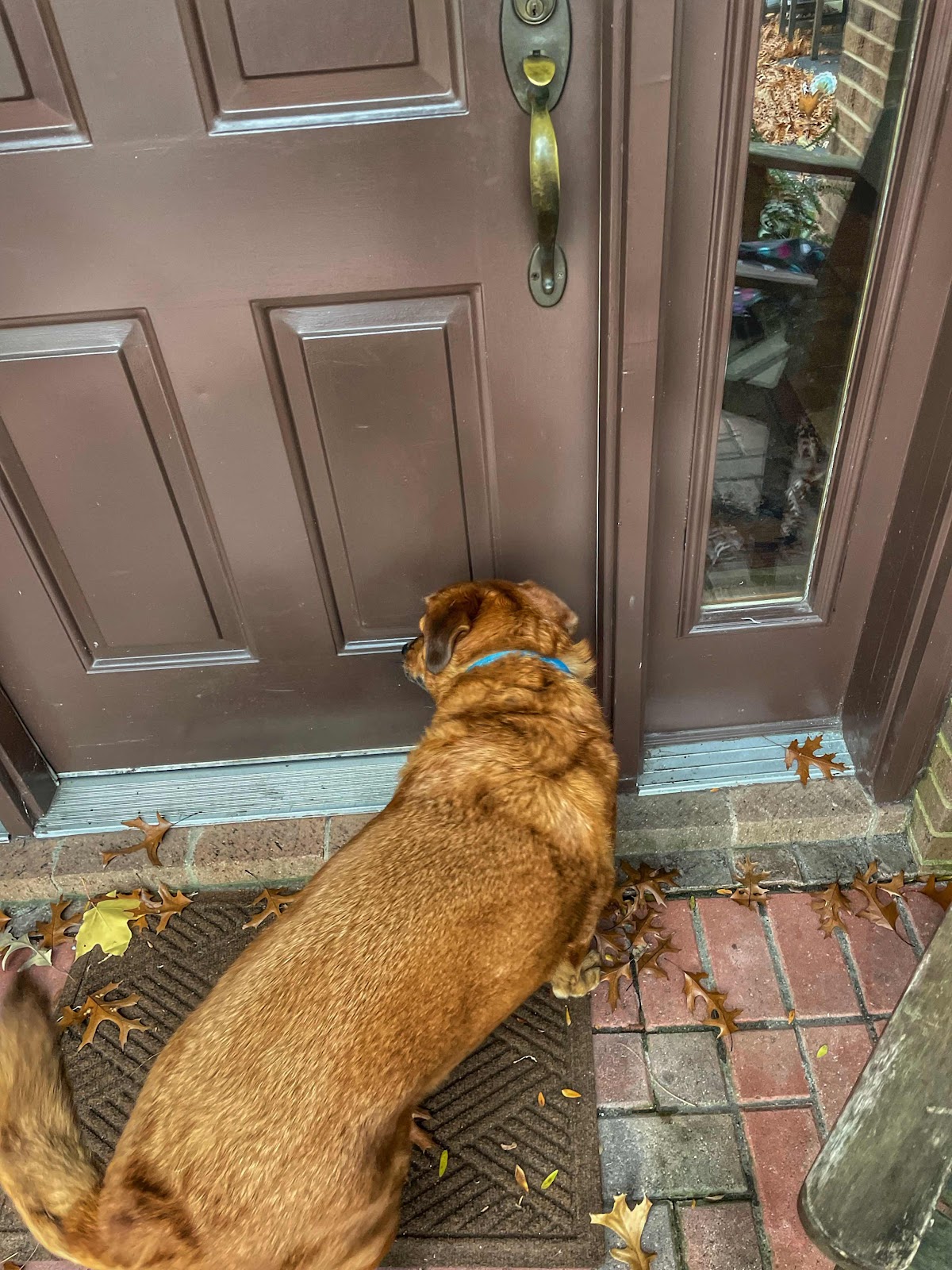 He gets bored by the conversation and ends up doing this, pulling down a cushion and using it as a pillow: 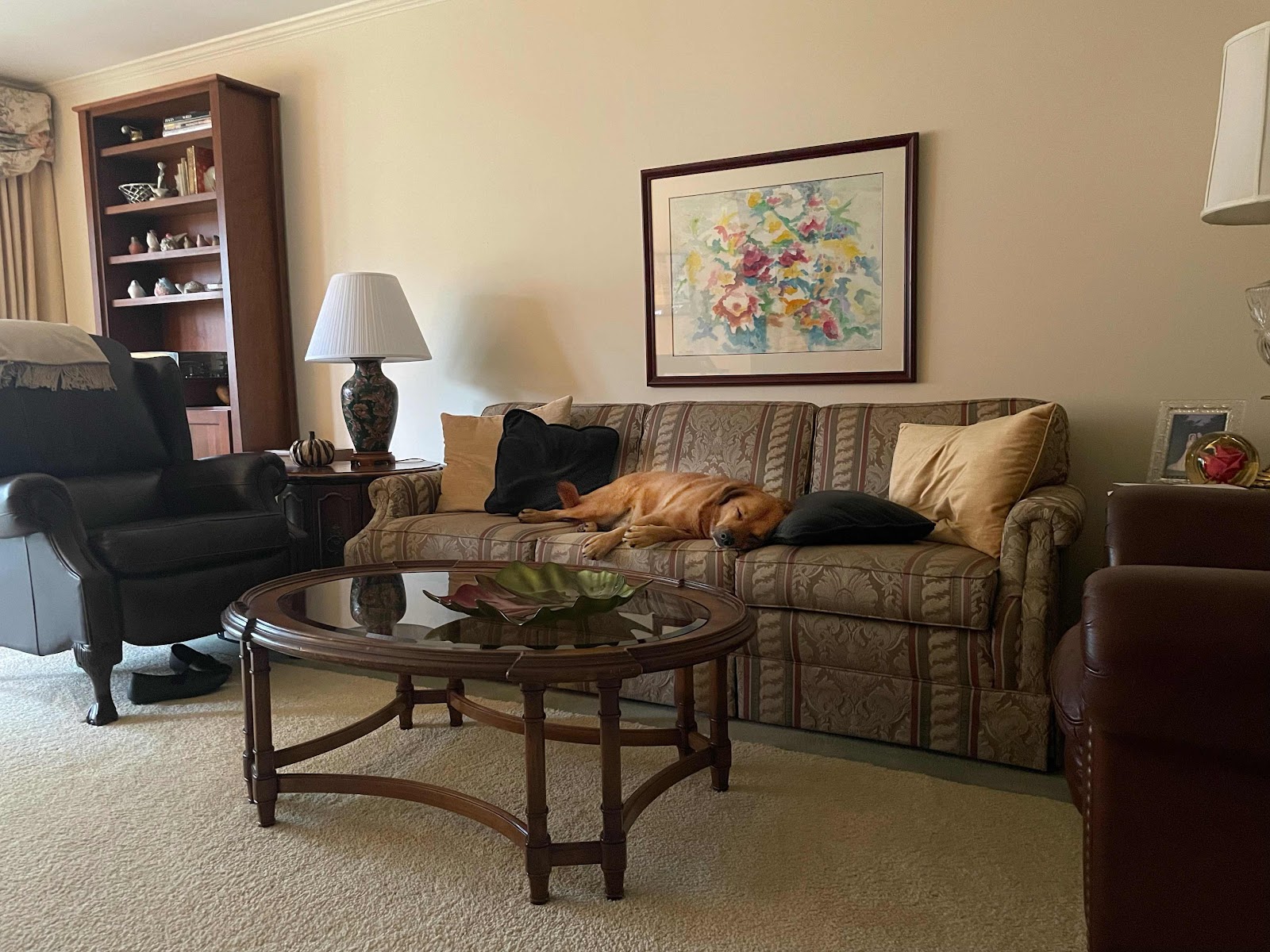 Lynn put us to work helping her manage her extensive list of neighbors and friends at holiday time. She makes rather delicious nut clusters and I was curious to see what was what. 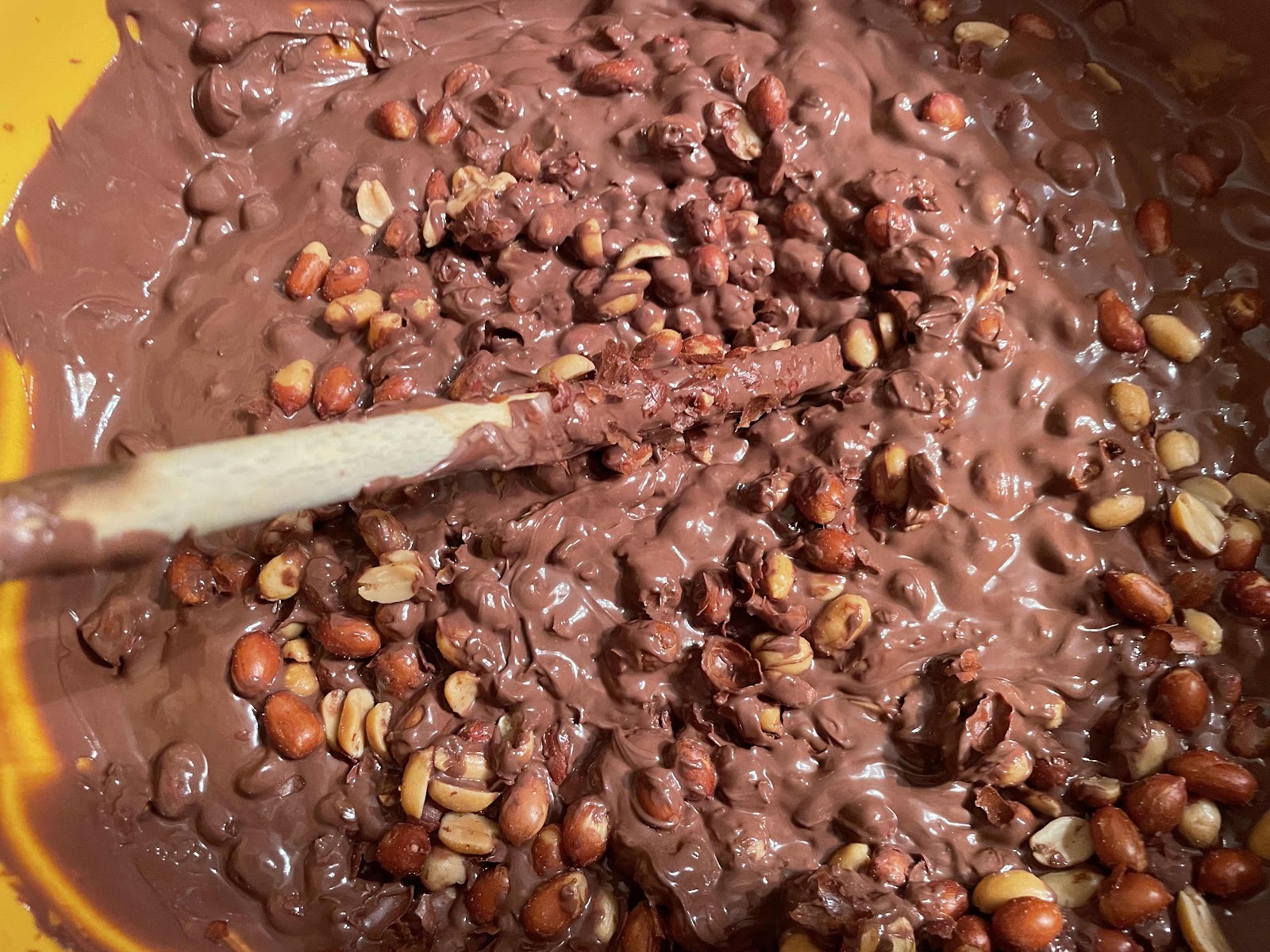 Three chocolates, dark milk and white were heated first and then Mr Muscle mixed them up while Lynn threw some Spanish peanuts into the mix. More heavy stirring...how she does it by herself I don't know because it is a heavy mixture. 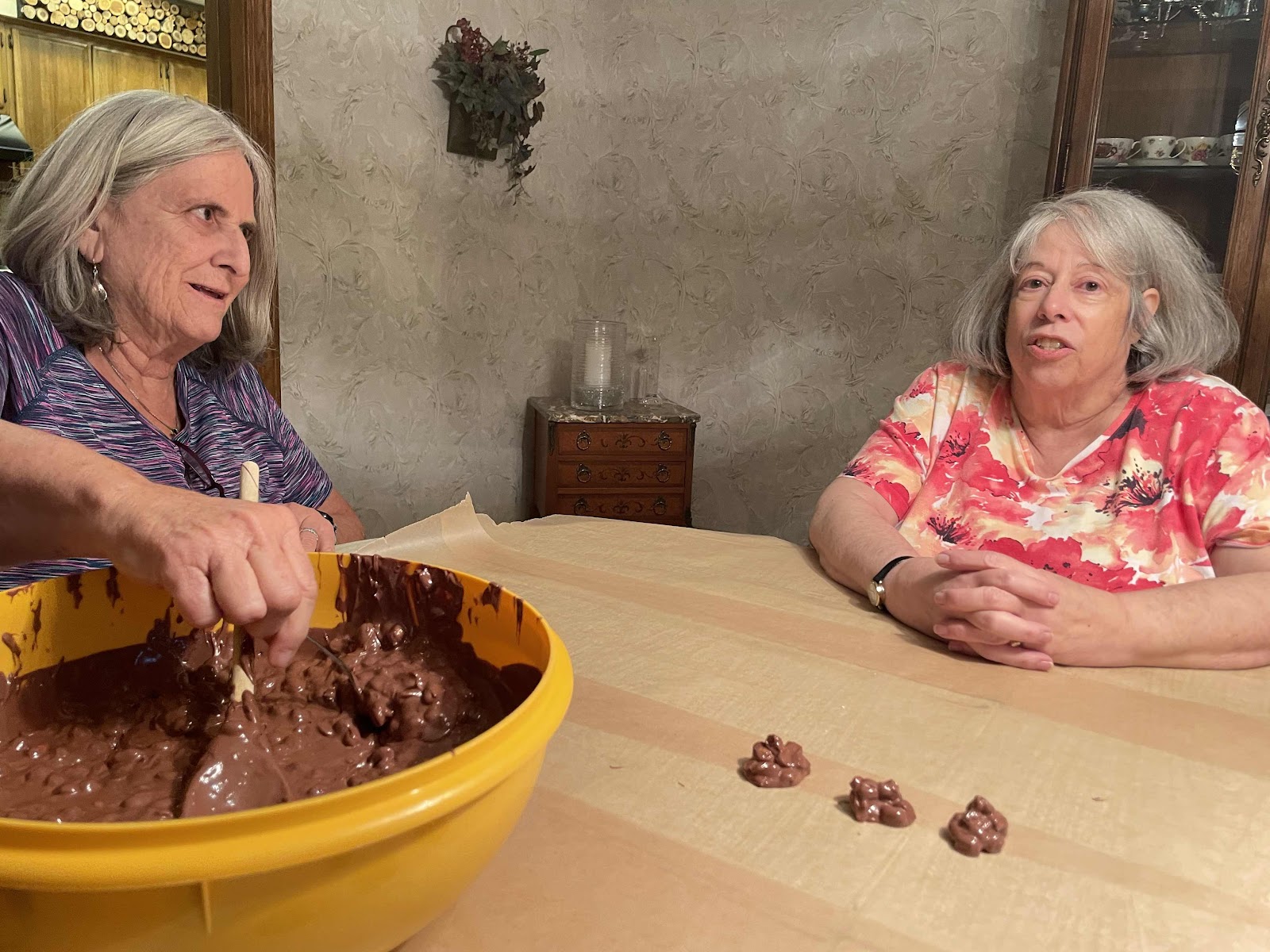 Wax paper covered in chocolate land mines. Quite delicious though you have to wait till morning to allow them to set. In the meantime clean loose chocolate from face hands and clothing if, like my wife you are messy (!). 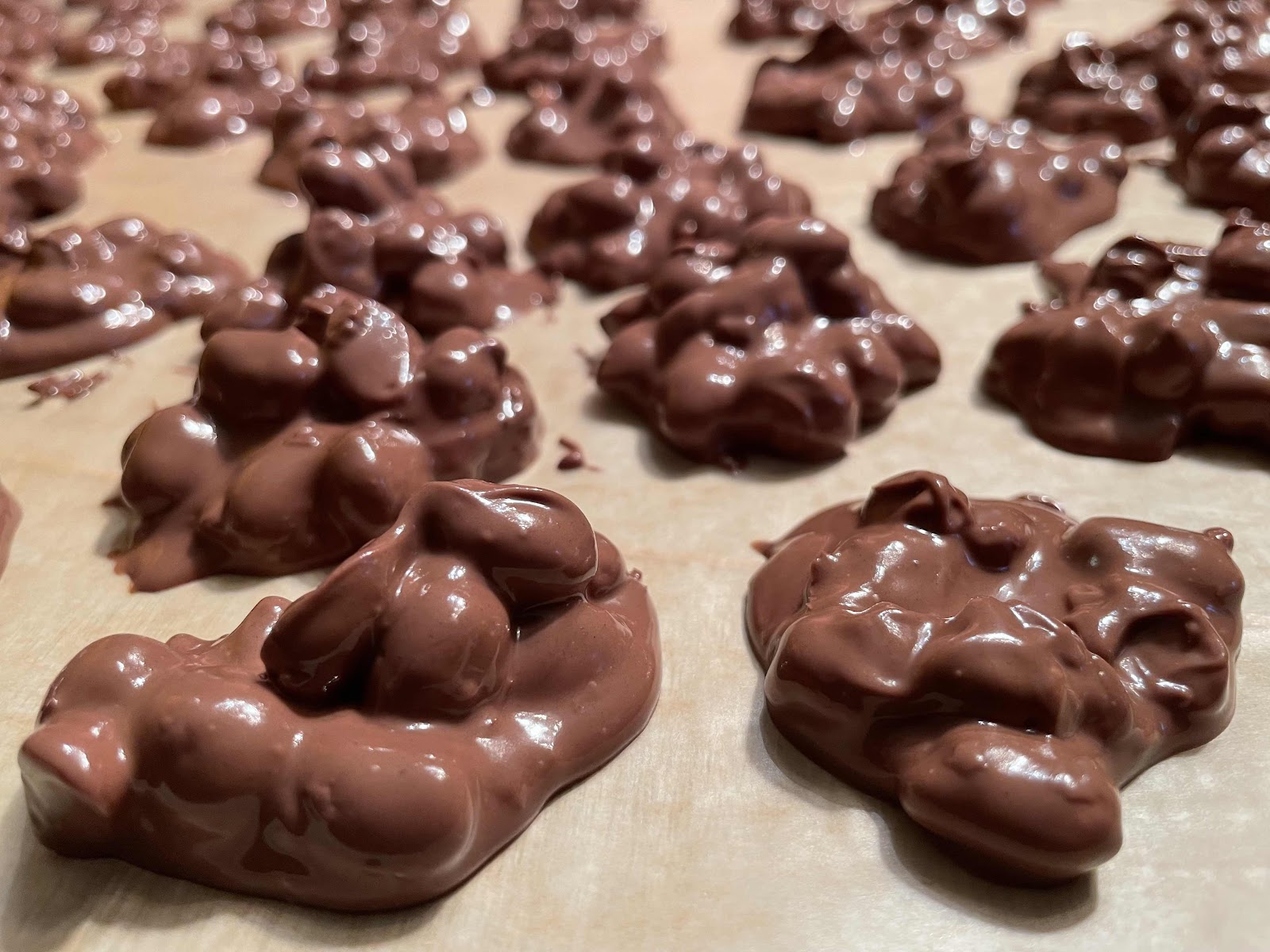 All work and no play makes me a tired boy so David pulled from Kitchen Patrol and we went and drank beer and talked at Yard House. I had Guinness which they seemed to offer in an endless supply so I did my best to make a dent in there overhead stainless tubes supplying the draught pumps. 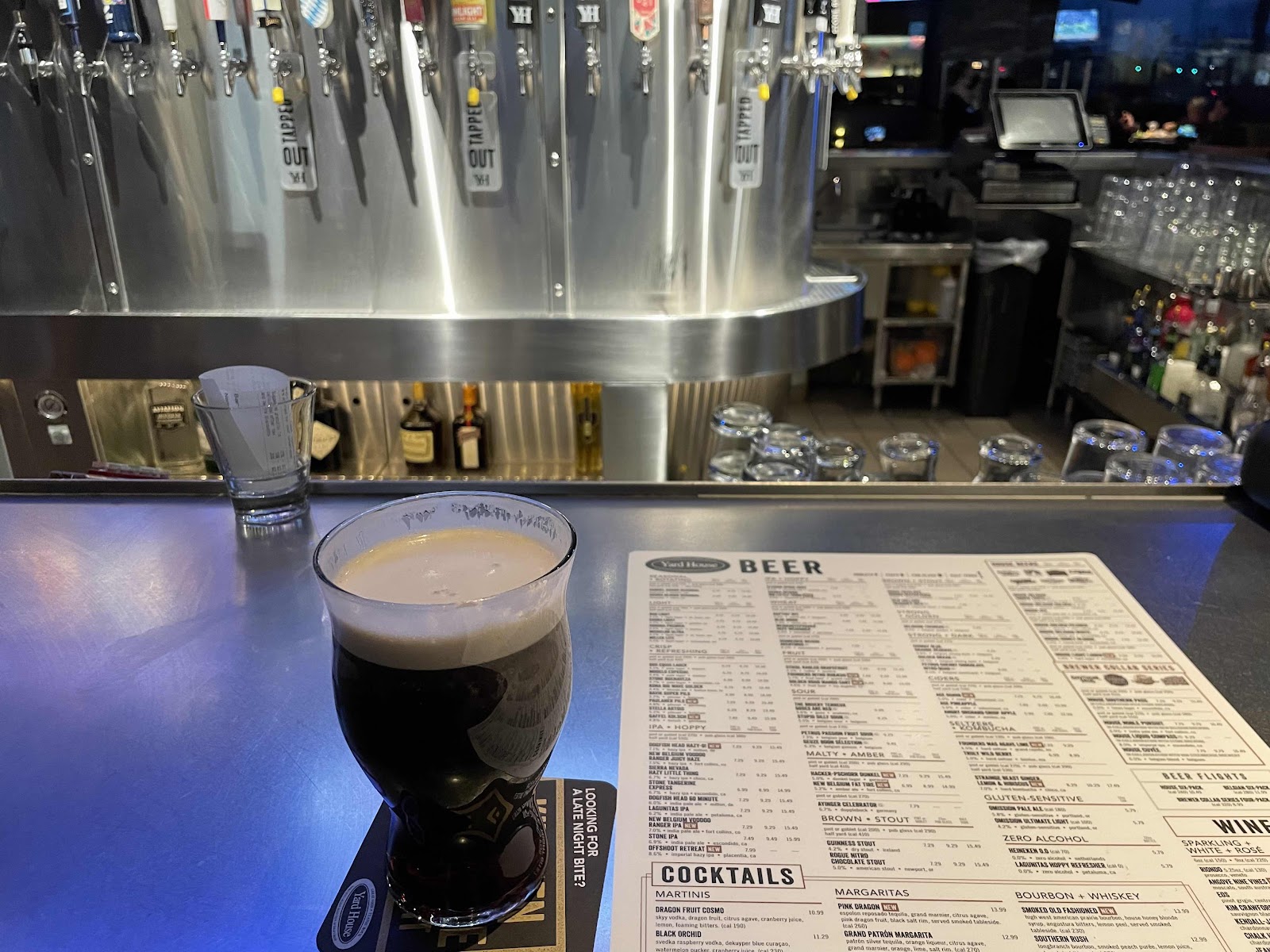 Our instructions were to bring dinner home so David the tech geek got the menu on the phone and we pondered options, sausage salami garlic broccoli (!) olives and so forth split in two halves on the mobile menu. Time meanwhile for yet more Guinness. Yum. 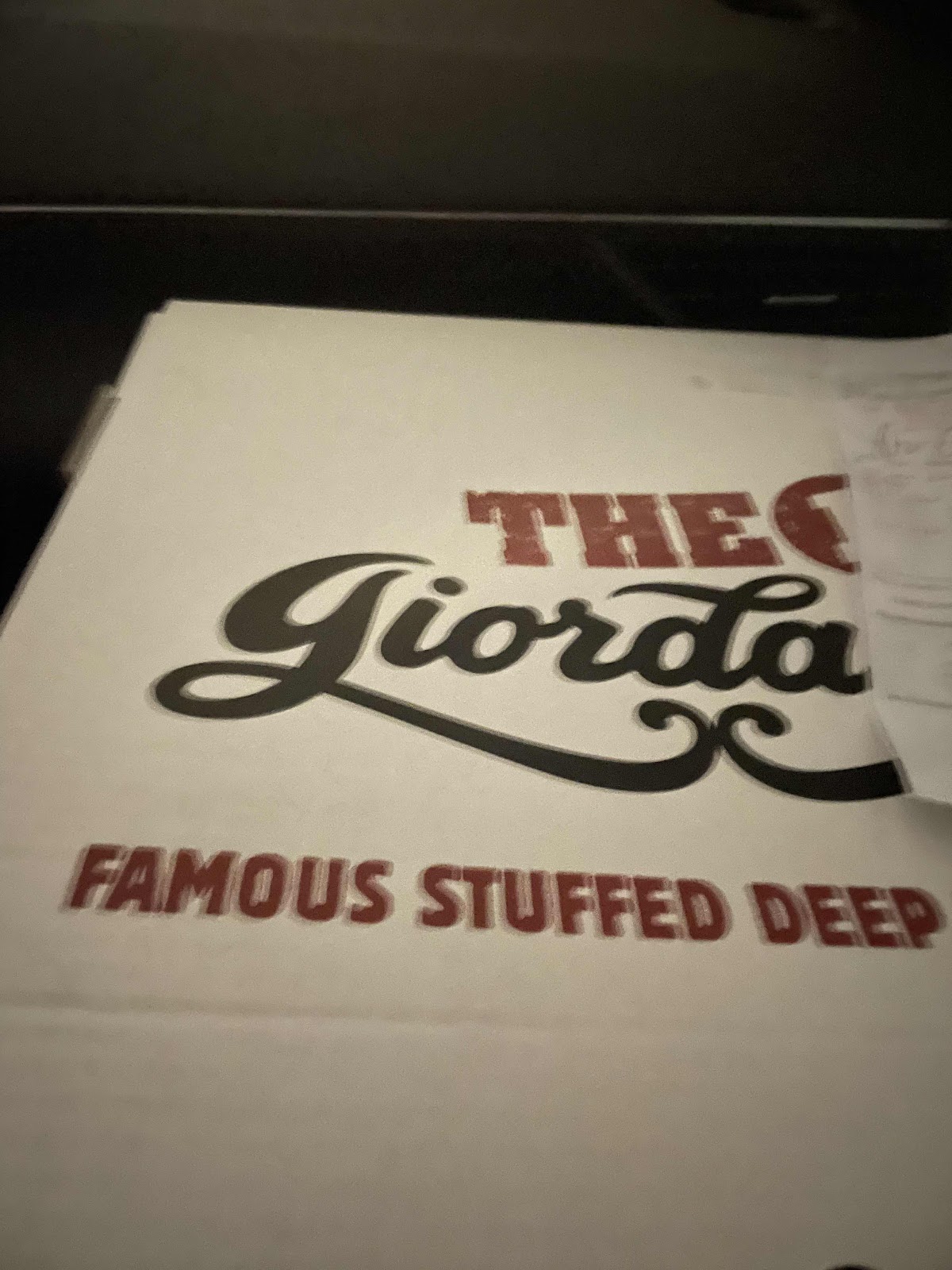 So the fuzzy photo was not helped by two factors: quantities of Guinness as drunk by me the passenger had the predictable effect, and the weight of the damned pizza was the second factor. I have never before picked up a pizza box that nearly upended me. This Chicago deep dish stuff is no joke, thick and as dense as a brick and quite delicious. Well, we got that done. That may also explain the tardy nature of this post. Apologies.