I felt more like sacking out like this portly cat, which was acting like a dog in this land of the back-to-front but we pressed on until a grinning local pointed us to El Pirun a local word for a wine jug apparently. Marco loves wine and bugger me if he didn't look like Jack Riepe's younger brother.

Happily he didn't wait the tables but his pouty young assistant did, bored and in the manner of a teenager who would rather be out getting laid, a worthy occupation no doubt, but still she managed not to spoil our meal.

A prosciutto plate and trofie, local squares of pasta with pesto, Liguria is the originator of this sauce and here they added green beans and potatoes to the sauce.

Then we shared a baked fish in olives, olive oil, lemon slices and potatoes and rosemary.

Washed down with a local dry white before we had a pudding so good my wife ordered her own after tasting mine.

Panna Cotta, a light custard, in this case covered in white chocolate sauce and whipped cream. By now the pouty waitress was smiling and so were we so all that was left was to go downstairs and sit around with an Australian woman and her Italian friend and taste Marco's wines.

Which we did including his five year old local wine called sciàchetrà (pro: sha-kay-trà)

The rest of the Cinque Terre consisted of a train ride to Monterosso, the larger town at then other end of the cliffs which we decided was too busy and too big to worth visiting again.

But it does have the biggest sandy beach,

And I am too old to pay that much to see this.

Swarmed the next train, elbows out, ain't mass transit a joy?

And found Nirvana in the little town of Vernazza.

On a windy afternoon we sat and watched the harbor.

And watched people watching the harbor.

And a little light shopping and so,

- Posted using BlogPress from my iPad
Posted by Conchscooter at 4:08 PM No comments: 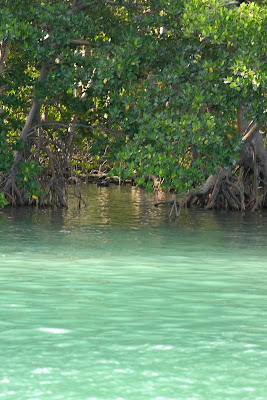 Mangroves by GarytheTourist. I will be back with my trenchant essays revitalized by a vacation this month away from Key West.
Conchscooter.
Posted by Conchscooter at 4:01 PM No comments: 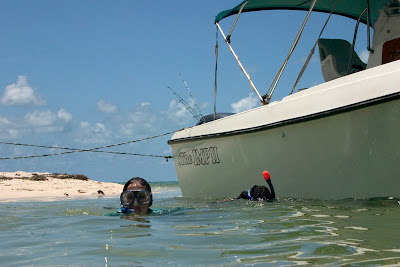 My Family Snorkeling by GarytheTourist.
Posted by Conchscooter at 8:01 AM No comments:

Thanks to the stiff ocean breeze, which kept the village ferries in harbor all day the high walk through the vineyards was not at all hot.

The middle section of the trail was mostly flat and narrow and early on it was right on the edge of the terraces, which played he'll with anyone's fear of heights.

Arrivals on the later trains and late starters generally started to catch up to us as we ambled along enjoying the views.

It was like Disneyland with none of the safety features, Nature not exactly in the raw but pretty close. The flat bits alternated with steep steps, chunks gouged out of the trail and impossible switchbacks.

There were no park rangers or emergency phones or refreshment stations, though we did end up walking through the back yards of a couple of houses clinging to the hillside.

We walked past their rustically roofed shed and found ourselves between two ladies hanging out laundry behind their house.

They had put potted geraniums along the trail and I asked if it got tiresome having strangers trek through their lives. Not at all they said cheerfully, we quite like it. We're not savages. I wanted to say I begged to differ as I couldn't get an espresso in Volastra but I thought such a comment churlish and refrained.

We entered a lovely forested section and wandered through shade and sun on the dappled trail. Here we found the loo, a convenient shrubbery as it turned out, as portaloos are unknown in the Cinque Terre. One gets the feeling there is a lot they don't know about the outside world and we are probably better off if they never find out. I rather liked the lack of safety warnings everywhere.

These trails are not wheel chair accessible.

And on we went stumbling as we walked watching the wife's increasingly painful rheumatic ankles as she dished out the punishment uncomplaining.

Our destination of Corniglia seemed a long way away below us as we met the trail junction.

The views continued lovely but the trail down was in a word absolutely terrible. That was Manarolo far behind us.

We agreed that had the first path up been this bad we'd never have undertaken the five mile hike.

Most of it was steep indeed but filled with gullies and loose rocks and steep roughly defined steps and utterly bloody endless.

Until finally, swearing up a blue streak we arrived in Corniglia for lunch, and what a lunch it was, served up by Jack Riepe's younger brother, it made the appalling trek worthwhile.

All was forgiven, in Part Four.

- Posted using BlogPress from my iPad
Posted by Conchscooter at 4:04 AM 2 comments: 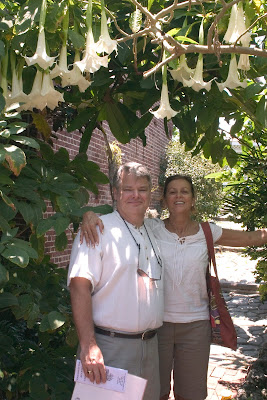 The photographer himself enjoying Key West.
Posted by Conchscooter at 12:01 AM No comments: