I have confirmed something that I already knew and I am pondering how to act on this knowledge. The fact that walking is the best possible way  to spot things worth photographing has been known to me for some time, which was always good news as I love to walk.  Yes yes, I know God has a wicked sense of humor taking away my ability to go for a stroll, but suddenly my electric mobility scooter may have opened a new window of photographic opportunity for me. Let me explain. 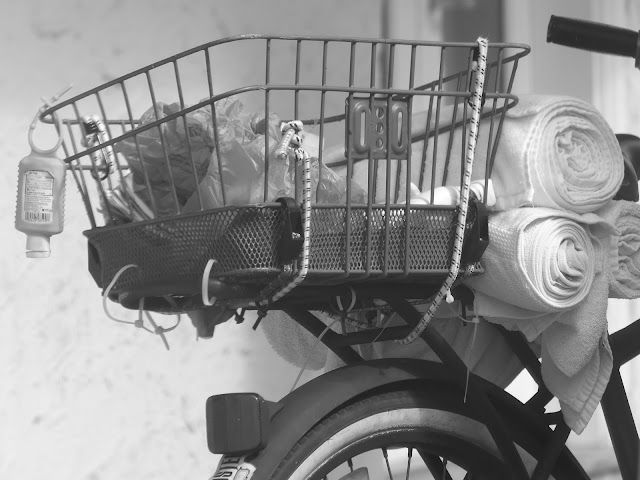 The picture above I took from the car window as my wife fought the walker and tried to pull it from the trunk. I could do nothing but sit and play with my camera. So I did. My wife is a saint, steadfast by my side through all this mess of rehab. Meanwhile for the photo below I was also in the passenger seat taking the picture on the fly. As tempted as I was to touch it up, straighten the horizon and edit out the corner of the car  and so forth, the picture nicely illustrates why Key West has the highest rate of bicycle fatalities in the state. The rider has a perfectly adequate sidewalk to ride but chooses, quite legally, to ride in traffic among cell phones operators and sleepers behind the wheel. Like they say, you've got to die if you want to go to heaven. 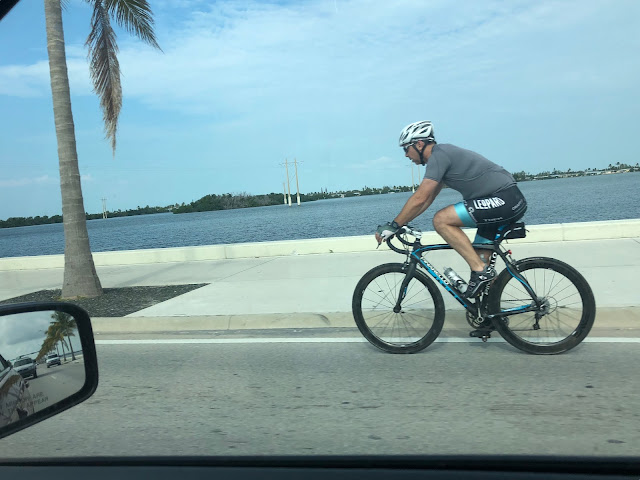 In the picture below we have another spandex enthusiast in traffic though here he has no choice, hence the danger of cycling in what is otherwise an eminently ride-able city. Key West is small and flat and supremely picturesque so bicycles should be perfect. I prefer to walk because I see more and am separated from the traffic flow. 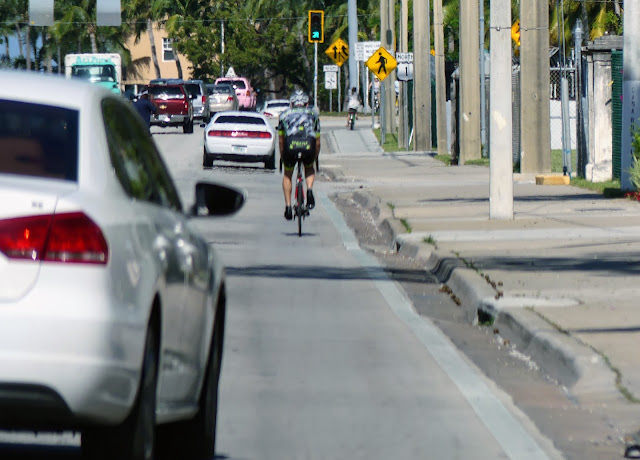 Then you take a 35 mph  golf cart loaded with avid telephonists from some place Up North and cars start to get antsy. Unlike a slimline bicycle these slow moving horrors are much harder to pass and local drivers who spot the tell tale flat roof start to look for passing zones. Mix in a few bicycles and traffic gets weird sometimes in Key West. 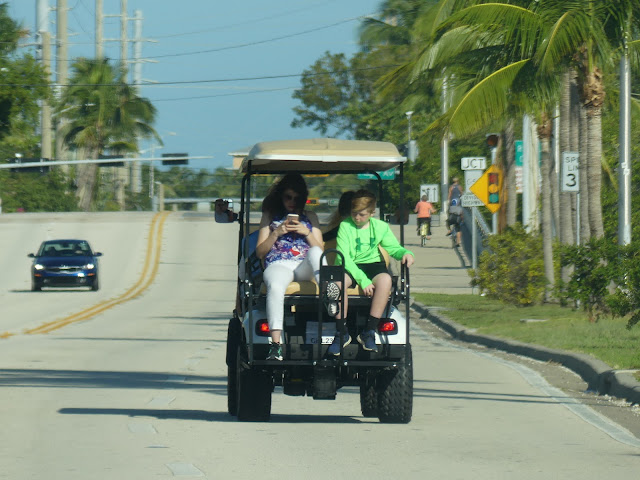 Some people love to ride Highway One which strikes me as a form of torture, no shade for a hundred and ten miles, partial bike paths, distracted drivers, scenery, that varies between wildly lovely ocean views best enjoyed while standing or poorly planned urban deserts for mile after mile and best ignored. Then there are implacable head winds of course to make the spandex sticky with your effort. But look at them pedaling like they are having fun. And some people give me grief for wanting to get back on a motorcycle when I'm healed. 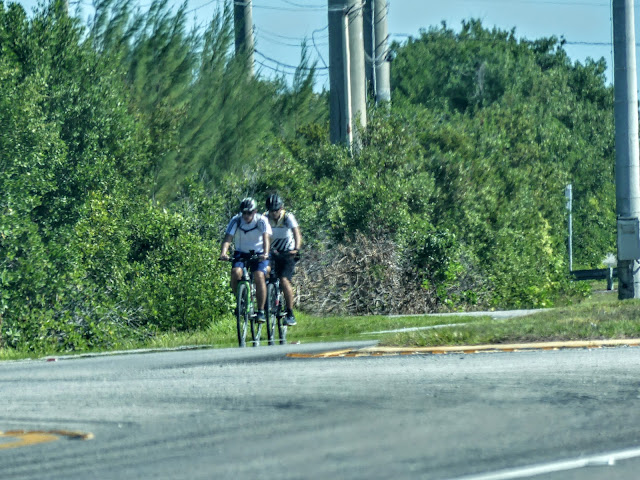 Then there are those who take up pedaling as a lifestyle, and they are tolerated as odd as their appearance may be. If I recall correctly this dude was pedaling around town before Irma struck and he seems to have survived with all his stuff. 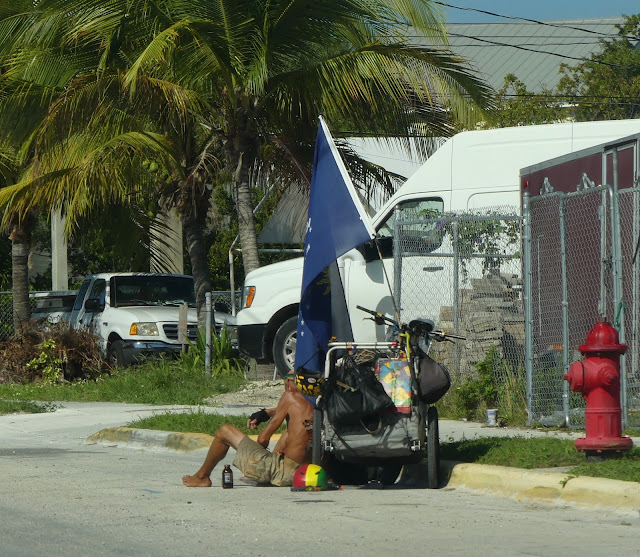 I posted this picture below to no great acclaim on Instagram labeled as low cost waterfront living. Once again illustrating my original point. Life flashes by when you're in a car. On foot you get to really look around and I miss that terribly. Bicycles aren't much better because they still put you in the traffic flow and if you want to live, as I hope I have amply illustrated, they aren't much use as a photography platform. Walking is this photographer's best form of locomotion. It's not the speed, its the ability  to stop and ponder as required that makes walking so blissful. 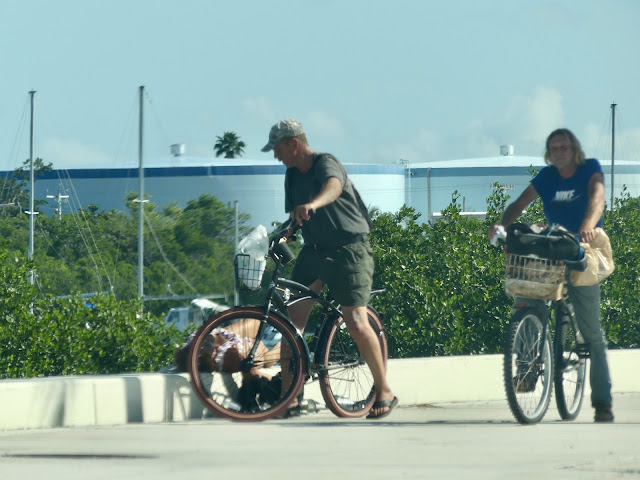 However let me say this: the mobility scooter I have been riding has turned into a quite good platform to see the things and note the angles and observe the spaces I miss when traveling more conventionally. It moves at a fast walk but it puts me close to the edge of the sidewalk, in a position that forces me to look. I am getting quite fond of my mobility scooter. I smile a lot more than the bicyclists I encounter when I'm riding it. 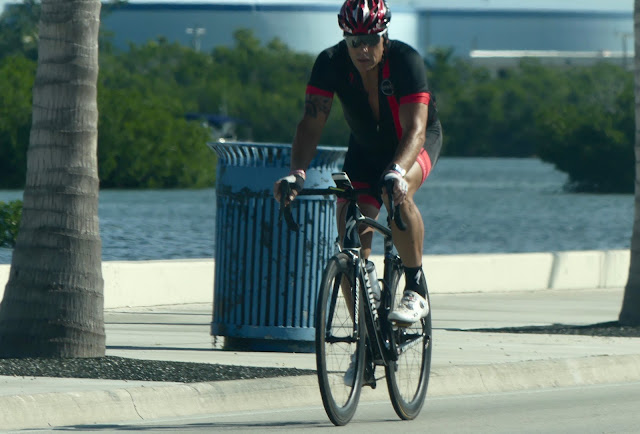 I have indeed been smiling a lot lately and I'm not sure why. Maybe its the Percocet but I prefer to think it's the daily realization I am here and getting better. My legs are stronger though not yet able to support me properly. The days are warm and sunny and I am not alone in having a reason to be standing around grinning; check them out, those happy people! 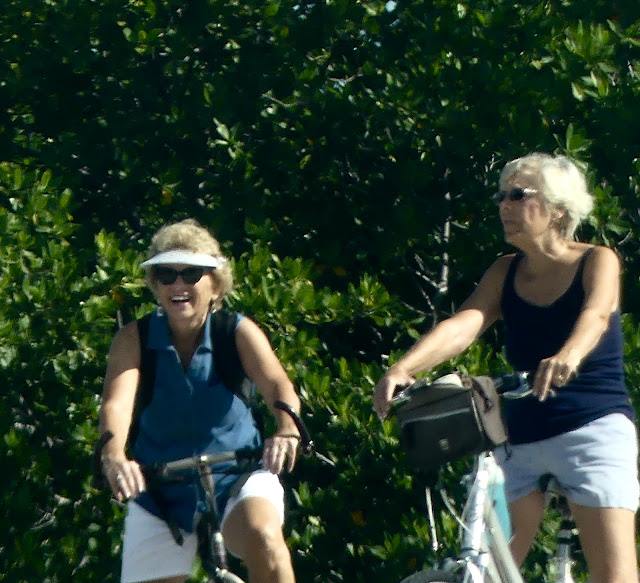 Face it, recovering in Key West in winter is as close to ideal as I can make it. Too bad I can’t walk because I really do miss standing around pondering a picture I’d like to compose. I’m finding it difficult to find the pictures I know are out there. A shot here and there doesn’t make up for considered walks, a happy dog and a camera in hand.  I’m embarrassed to push myself out to be seen complaining in public but dammit I’m annoyed at myself. 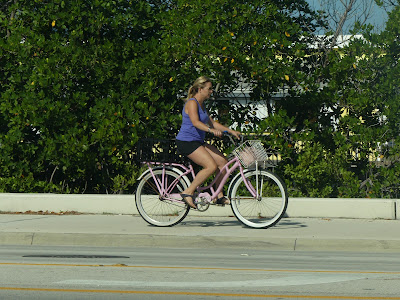 I realised the electric scooter was possibly the answer to my impatience when I first rolled along the sidewalk of South Roosevelt Boulevard and I could peer over the sea wall into the mangroves. I’d never seen these before, the landing craft of the people living on the boats anchored in the channel between Key West and Stock Island. 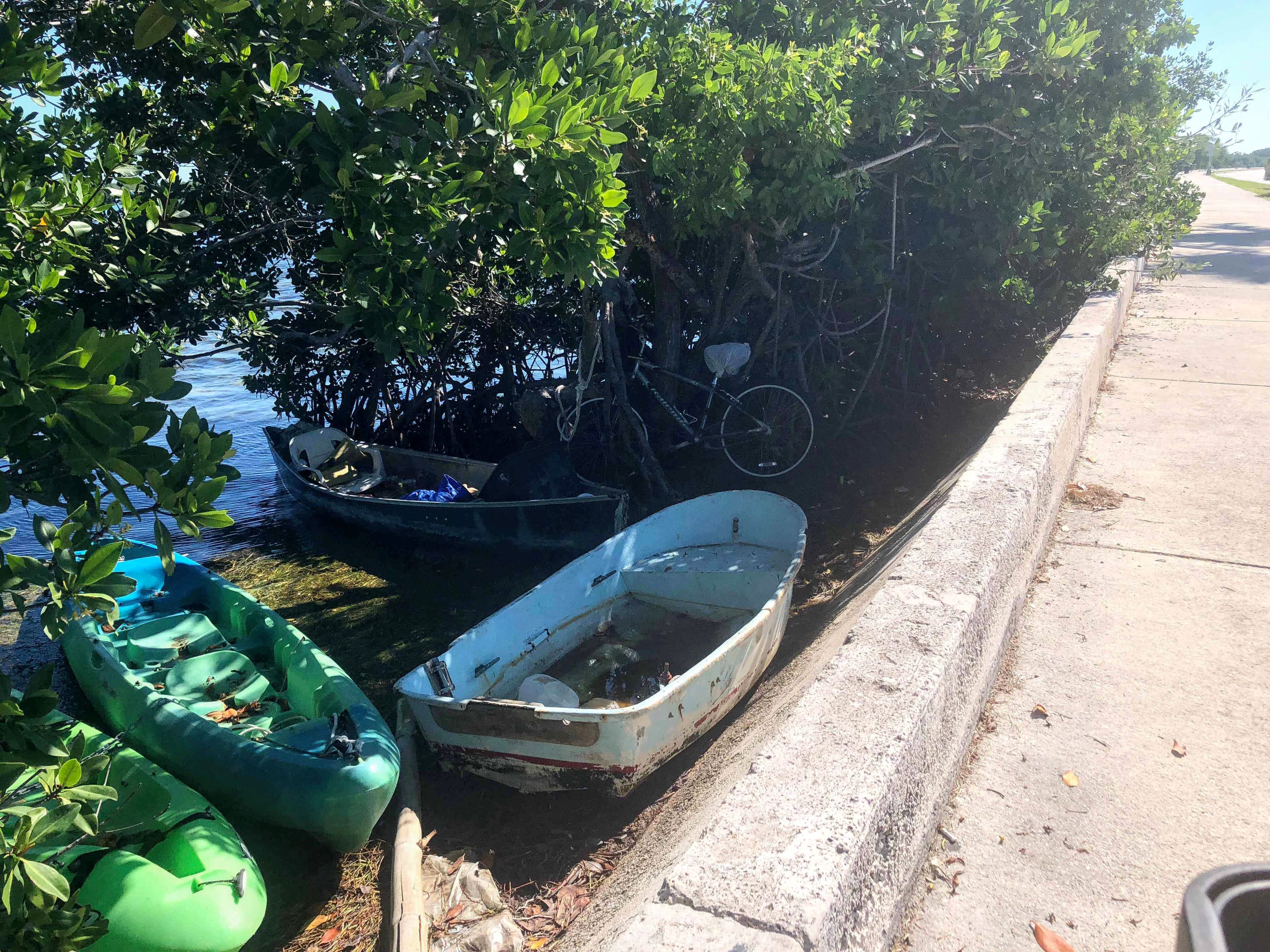 Yes, I thought to myself, I can’t ride a bicycle or drive a car much less walk distances on my own two feet. But I can travel around town, out of the traffic and in my own world. A place where I see things and take pictures because it pleases me. I’m not there yet but I will make time to roll out by myself and do a photographic expedition, not on foot as I’d like but as close as I can get for now. 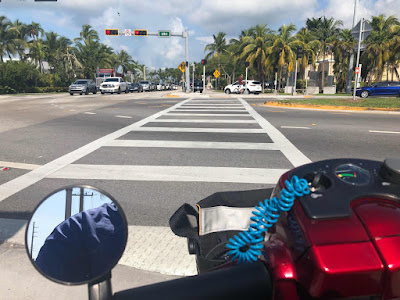 Life in the slow lane, stopping to look and see and think. At my speed. Still a privileged position in this overly hasty world of ours. 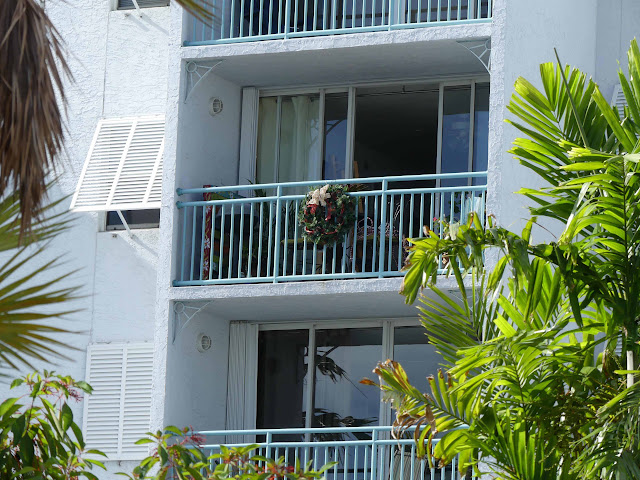 I’ll let the cyclists and the motorists race on by while I work to get my land legs back! 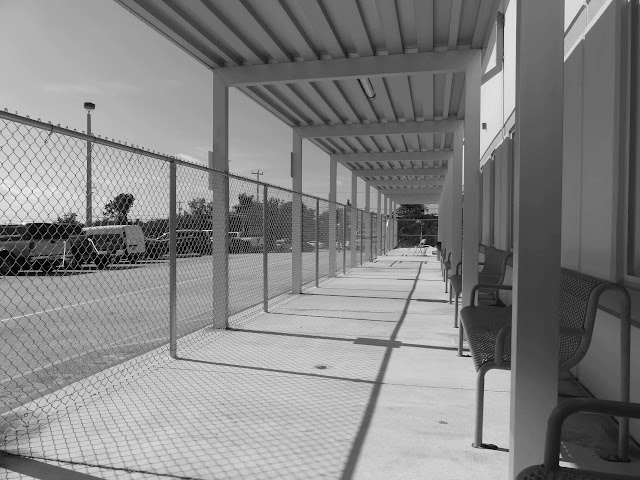