I was at the motorcycle repair shop saying hello to my Bonneville which is waiting for a valve job and on the way in I passed two very similar scooters. One of these two scooters is an Italian job, made by Aprilia and is full of scooter cred. The other is a cheap Chinese knock off which it's proponents argue does the scooter job just fine with no need to pay through the nose for the Italian job. 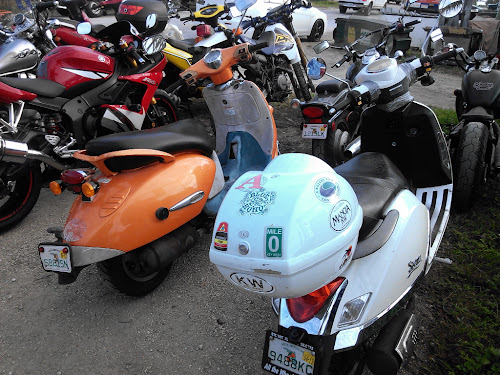 The orange scooter on the left is The Aprilia Mojito (Habana in the embargo-free world) while the other one is a Chinese Baron.

Posted with Blogsy
Posted by Conchscooter at 8:00 PM 5 comments:

When I walk Cheyenne I frequently have her under voice control only. Cheyenne is as pacific and obedient a dog as any I have trained, and I make it easy for her as I give her as much freedom as I reasonably can. She ambles, sniffs and sets the pace and chooses the direction when we come to an intersection. In return I transport her hither and yon each day a different walk within a few miles of home to keep her interested and reduce boredom. It is an amiable partnership between friends. I pick up after her, she comes when I call, she stands by me when a car approaches and I get to read as we stroll in companionable silence. She is a joy to live with, day after day. 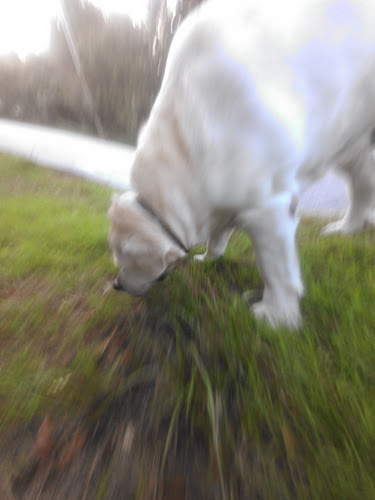 I happen to prefer walking the woods and trails but Cheyenne is an urban hunter, preferring streets and parking lots, trailer parks and trash cans to the delights of trails through the woods in the back country wilderness. So, because walks are her time, I indulge her and seek out urban strolls of varying length on different islands. The warmer the temperatures, the less she likes to walk which is good for me as I like to get to bed after her early morning walk. 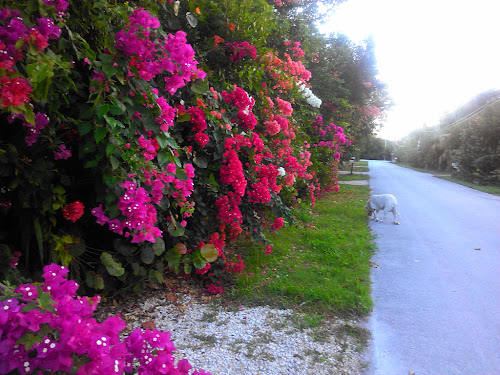 It happened the other morning I finished an overtime shift at four and when I got home Cheyenne was ready for a pre-dawn walk. I figured that would work for me as well as I would get some nice uninterrupted sleep if we were both tired out so I piled my Labrador into the car and off we went to her favorite walk on Big Pine Key. I parked the car outside a strip mall a convenient spot from which to launch a dog walk but before we could step off a curly blonde head popped out from the darkened dog groomers and barked at me, much like an irritated dog. "Is he pissing on my door step?" my response was pure puzzlement. I had met the woman previously and she was quite pleasant. Right now she sounded drunk or hungover and generally pissed off. I said she's a girl, meaning females don't mark territory but the subtlety was excessive for the stupid woman who started snarling at me about dogs pissing on her doorstep and how custowere were coming at 9am ( in four hours!) and why wasn't my dog on a leash? Because... She doesn't need one I said. "Its the law," she screeched and my shrug apparently wasn't a satisfactory reply. Perhaps I should have pointed out what a dim view Code Enforcement takes of living in a commercial premise, but I just put Cheyenne back in the car and drove off. I used to visit the bike shop in the strip but I think I will do my shopping elsewhere from here on. 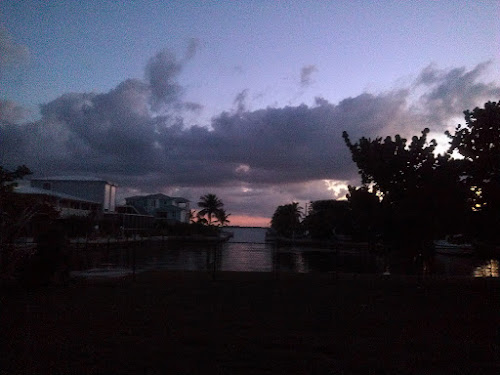 Weird stuff but I figured the woman is probably in bad financial shape to be living in the shop and is likely freaked out and what the hell, there's lots of places to walk a dog on Big Pine Key. We had a good time without the bitch from the grooming store yelling at us. And we slept quite soundly later. 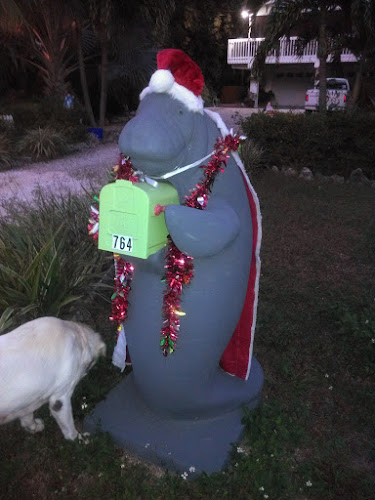 The leash question is an interesting one as I find most dog owners have no clue how to train or discipline their dogs. Cheyenne walks at my side and shows no interest in barking dogs, grazing deer or scratching chickens. She is the most laid back dog in the world and I think she is actually a good example for other dog owners who seem to have no empathy with their animals, on or off the leash. 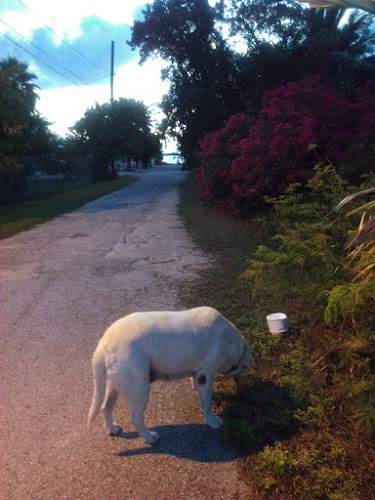 Which brings me to the next nutter I met on my walk with Cheyenne. That afternoon my dog was showing signs of interest in taking another walk so to kill her restlessness I took her out for a quickie before I left for work that evening. I should have stayed home. 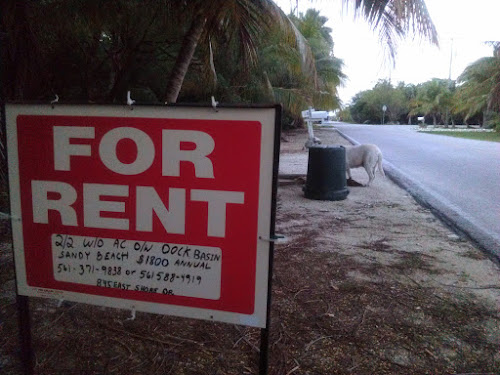 There I was on Ramrod Key and as we got out of the car a woman with two yapping hounds on one leash hove into view up the street between two high hedges of mangroves. There was no one else in sight and Cheyenne was placidly grazing in the grass at the side of the road while I leaned up against the car reading the latest edition of Motorcyclist. The woman got closer with her hounds yapping wildly and tugging at their leash. The woman stated swearing at me, telling me to leash my dog. It's the third time she cursed in exasperation. I looked at her, pointing out how my dog had her back to her as she grazed ignoring the howls of the leashed beasts and how her dogs were baring their fangs at me. She was not the least mollified as I removed the leash from around my next where I carry it while I walk Cheyenne and attached my dog to it. It hung between us like a windsock drooping on a windless afternoon. And as pointless because the woman just started nagging on and on about the leash law and how I was a scofflaw and how she has lived here 27 years as though that has anything to do with the price of beans. That's longer than you she finished triumphantly. Actually I replied, I first came to the Keys in 1981 which didn't stop her tirade at all. She was hanging on to her dogs her stick thin legs braced against their pulling, her parchment like brown skin hanging off her thin frame like a deflated balloon. She was angry as hell and when I tried to empathize with her embarrassment she just got madder. I said I was sorry her dogs were setting such a bad example and I understood how awkward it was to see my perfectly behaved animal not reacting to her dogs and how I was sorry she was having such a hard time, she said her mangy mutt was "protecting her." I shouldn't have laughed. She walked away muttering and at one point threw down her smartphone in some private agony of frustration. When I asked if her phone was okay she rewarded me with a finger over her shoulder. She turned the corner and left Cheyenne and I in peace once again. 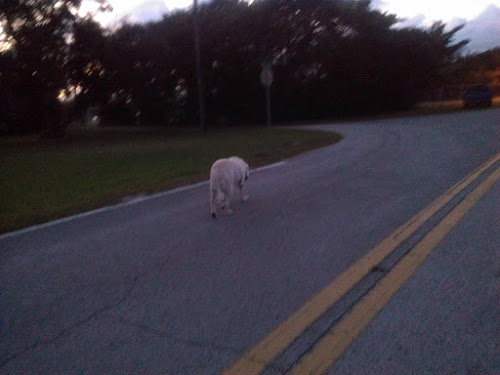 I was answering a 9-1-1 call one night and a woman was calling to ask for a officer to remove a drunk from her porch who was hammering on her front door demanding to be let in as though he lived there. "Why is he being so irrational?" she asked rhetorically. I replied that when people act bizarre it's usually grounded in drugs or alcohol. I think in both of my cases private misery probably also had something to do with it. I am not averse to leash laws but I get tired of disentangling my dog from her leash as we amble along and voice control per the law is my leash. As she sticks close to me anyway and obeys my voice commands I see no reason to be attached by an actual cord unless I am in an area of heavy traffic. Most of the time we stroll back streets at quiet times of the day. I am also convinced dogs are very capable of meeting other animals and not getting into a fight. Dogs typically sniff, say hello and move on. People seem to be rather more aggressive than the average lonely dog. Cheyenne doesn't chase deer or annoy wild chickens, she ignores trapped dogs imprisoned by fences and who beg for some friendly attention as we walk by, their owners indoors and ignoring their pets's pleas for love and affection. I am astonished by how fearful most dog owners are that their pets might actually get to play for a few minutes with a passing dog. Dogs, it has been said, are the Gods of Frolic and I love to see my girl enjoying herself in her own particular way. 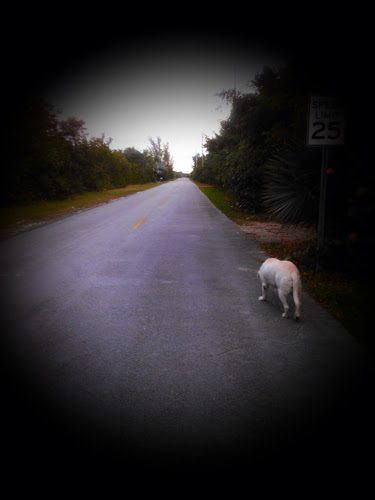 I laugh to myself every time I hear some dork or another talk about the laid back lifestyle of the Fabulous Florida Keys. And I haven't even told you the story of the plumber I hired to replace a leaky outdoor faucet and who came, half finished the job, refused payment as the pipe had a small leak after he replaced it and never returned to finish the job. Sigh. Gorilla glue to the rescue I guess. Luckily we live off our rainwater cistern most of the time and the inconvenience was minimal. Hiring anyone in the Keys to do a professional job will test the limits of your tolerance and patience and general belief in the laid back ...blah... Lifestyle...blah...Fabulous...blah ...etc...Perhaps it was just presaging the End of the World, which the Mayans supposedly estimated was going to happen today. Or not.