Hilton Head, South Carolina
We had time in hand before I had to pull in at Webb's mansion snuggled under the live oaks of typical South Carolina plantation life, so I thought as I usually do on these occasions to walk my dog. 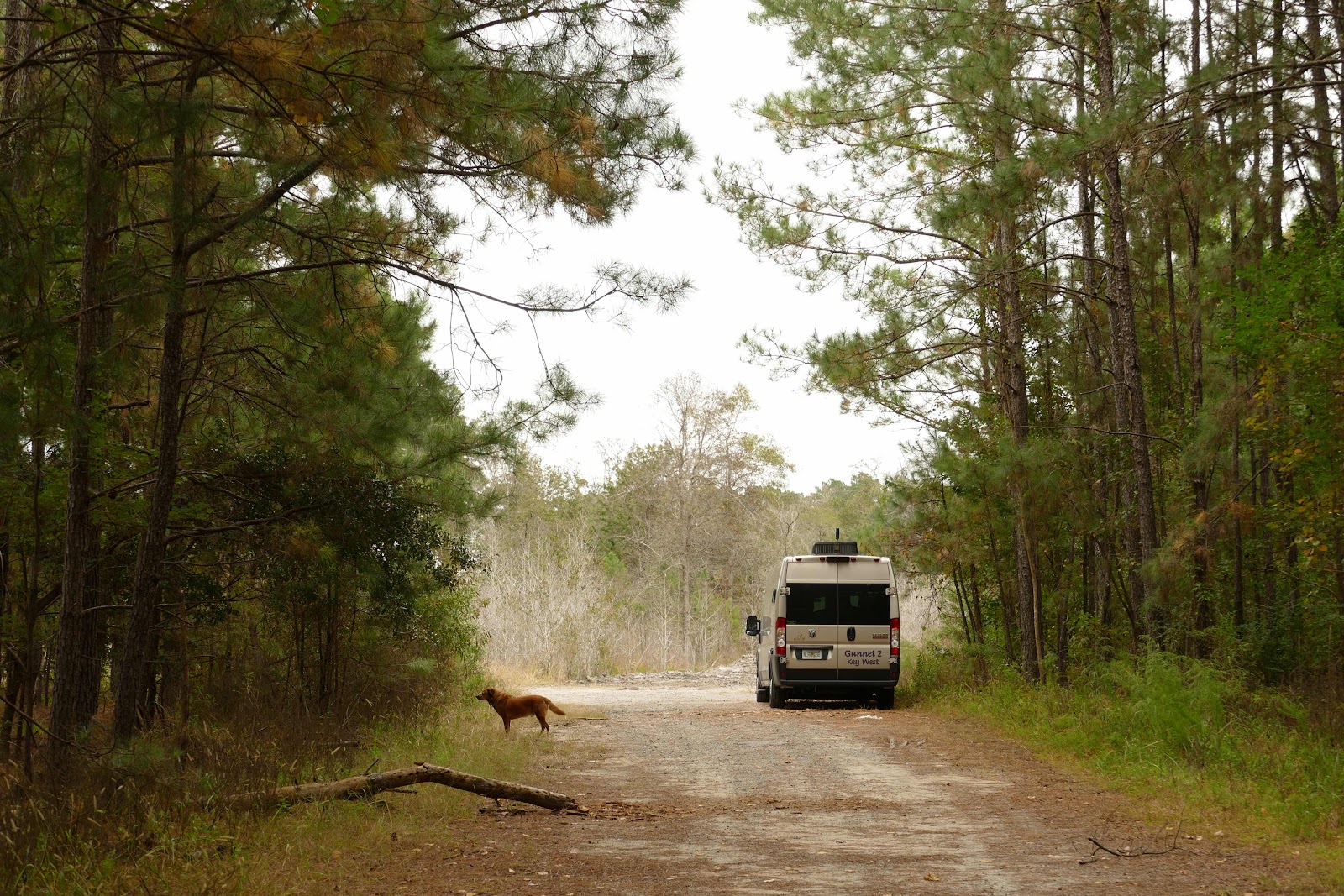 The great inconvenience of travel at 60 miles per hour in a ten thousand pound van is that when a roadside possibility flashes by it takes a while for the brain to process, the mind to decide and the other traffic to get out of the ay as a sudden change of course becomes imperative. Eventually I slid into the left lane, made an uneventful U-turn and reversed course. 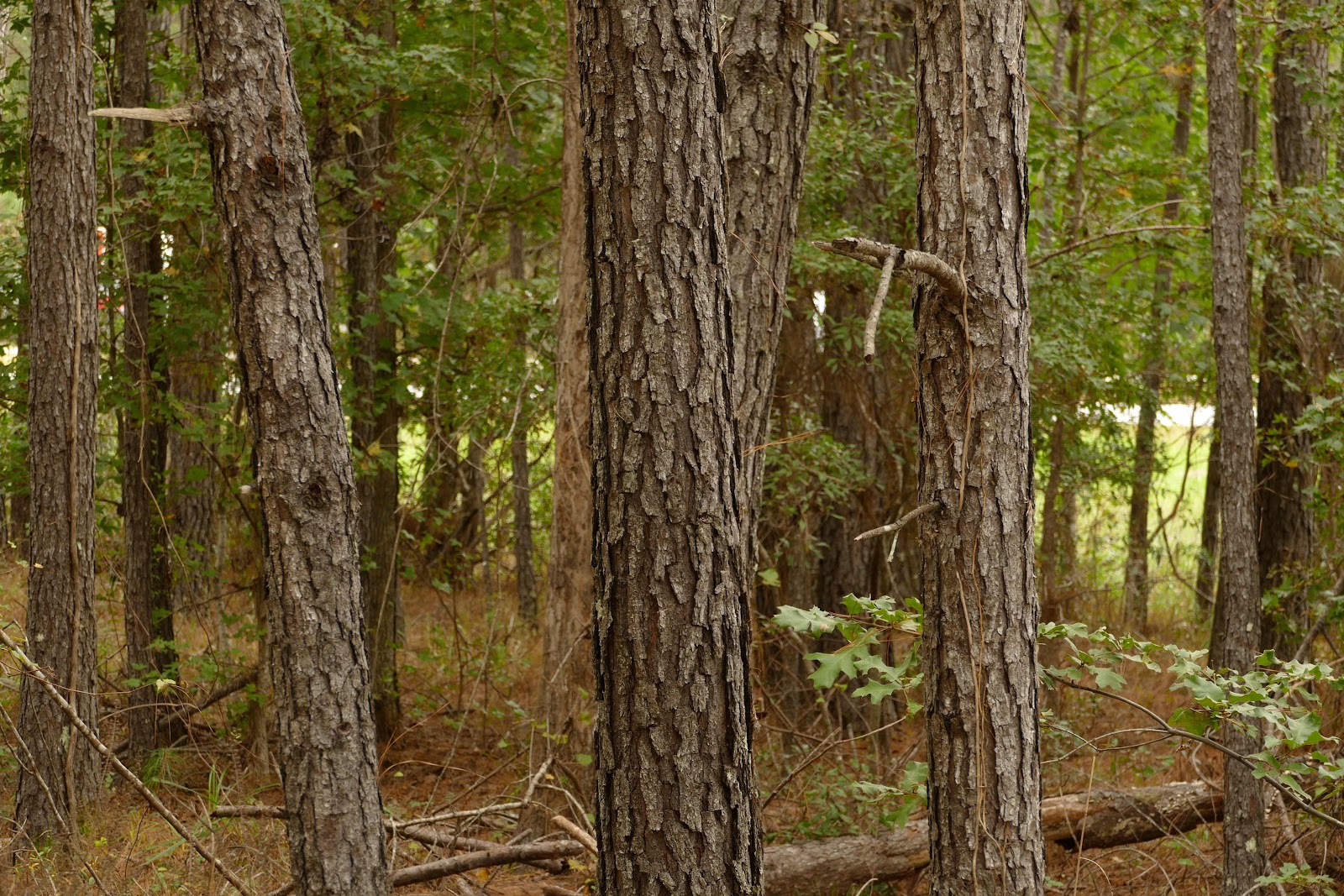 After another unmemorable and therefore successful u-turn I found the intriguing turn off and too to the dirt. Its not Rusty's first visit among out of state pine forests, when he was younger and more entrepreneurial he happily explored the banks of the St Lawrence River in Québec. No stranger to Canada I wondered why he was so leery of exploring these cool sunless woods with me. 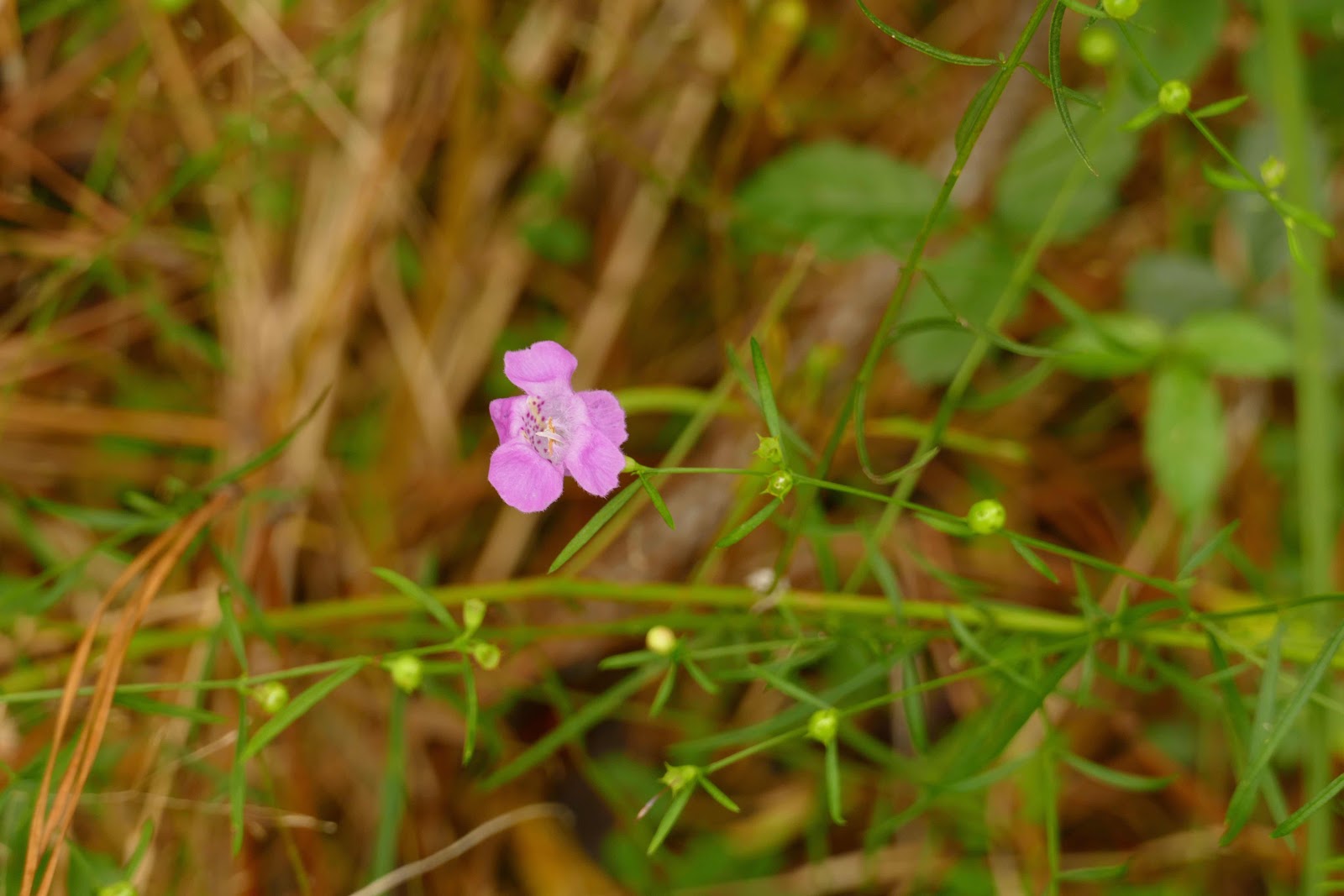 My wife slept badly last night for some reason not disclosed so she took her taco blanket and made like her buddy Al Pastor and took a nap in the 72 degree van (outside temperature was a brisk 59). 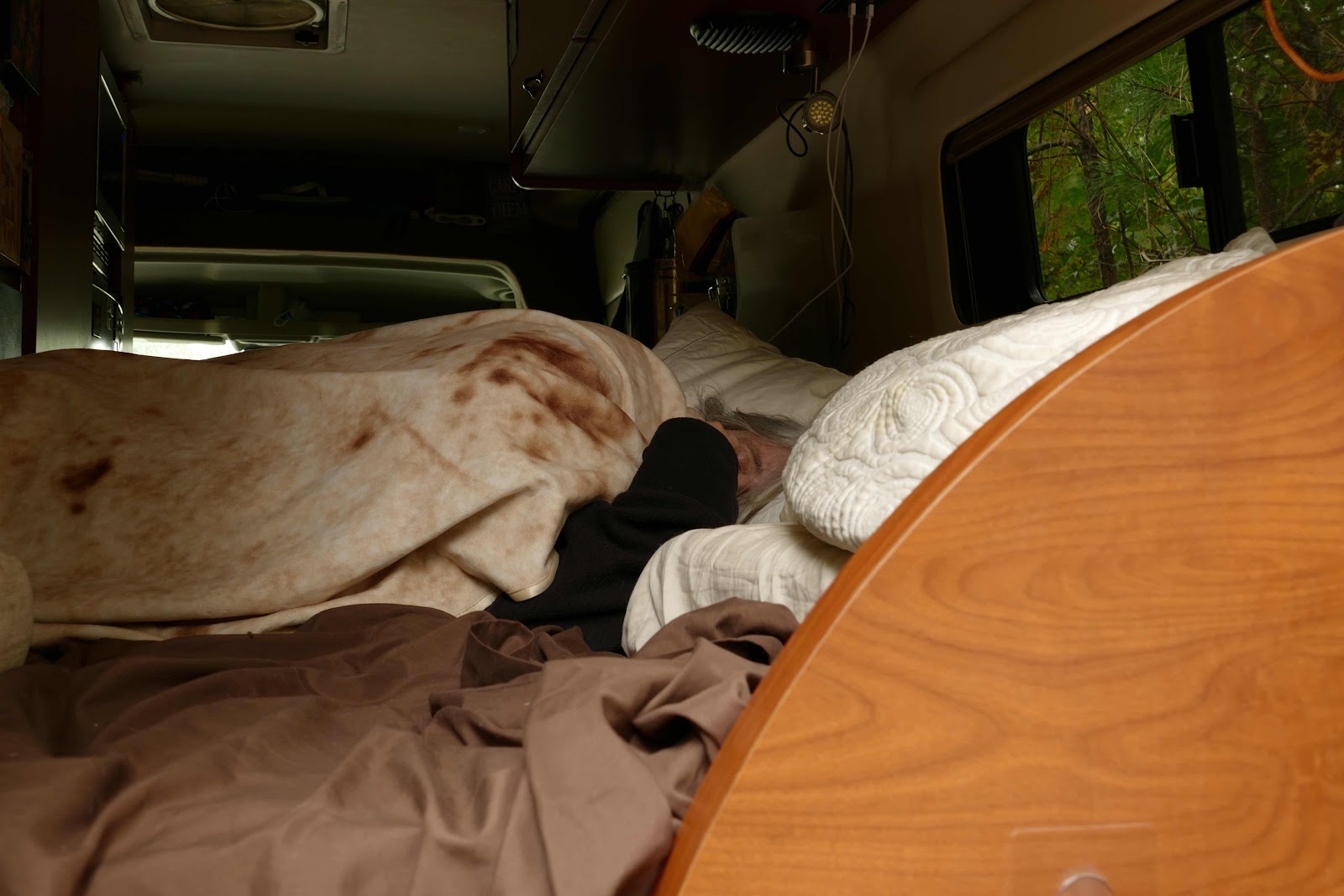 I strolled with my camera not able to find much of interest... 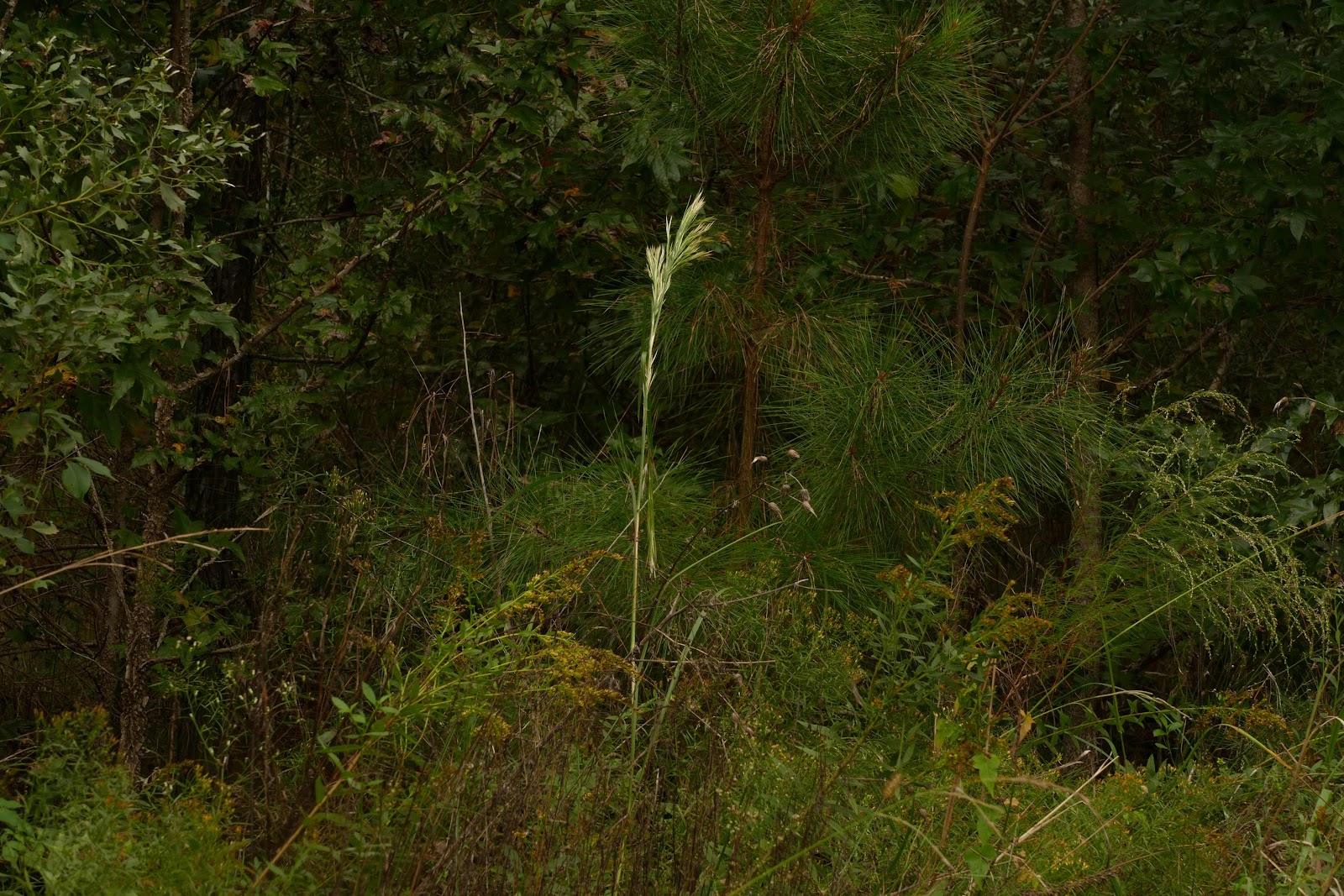 ...listeneing to the sounds of passing traffic, an endless flow... 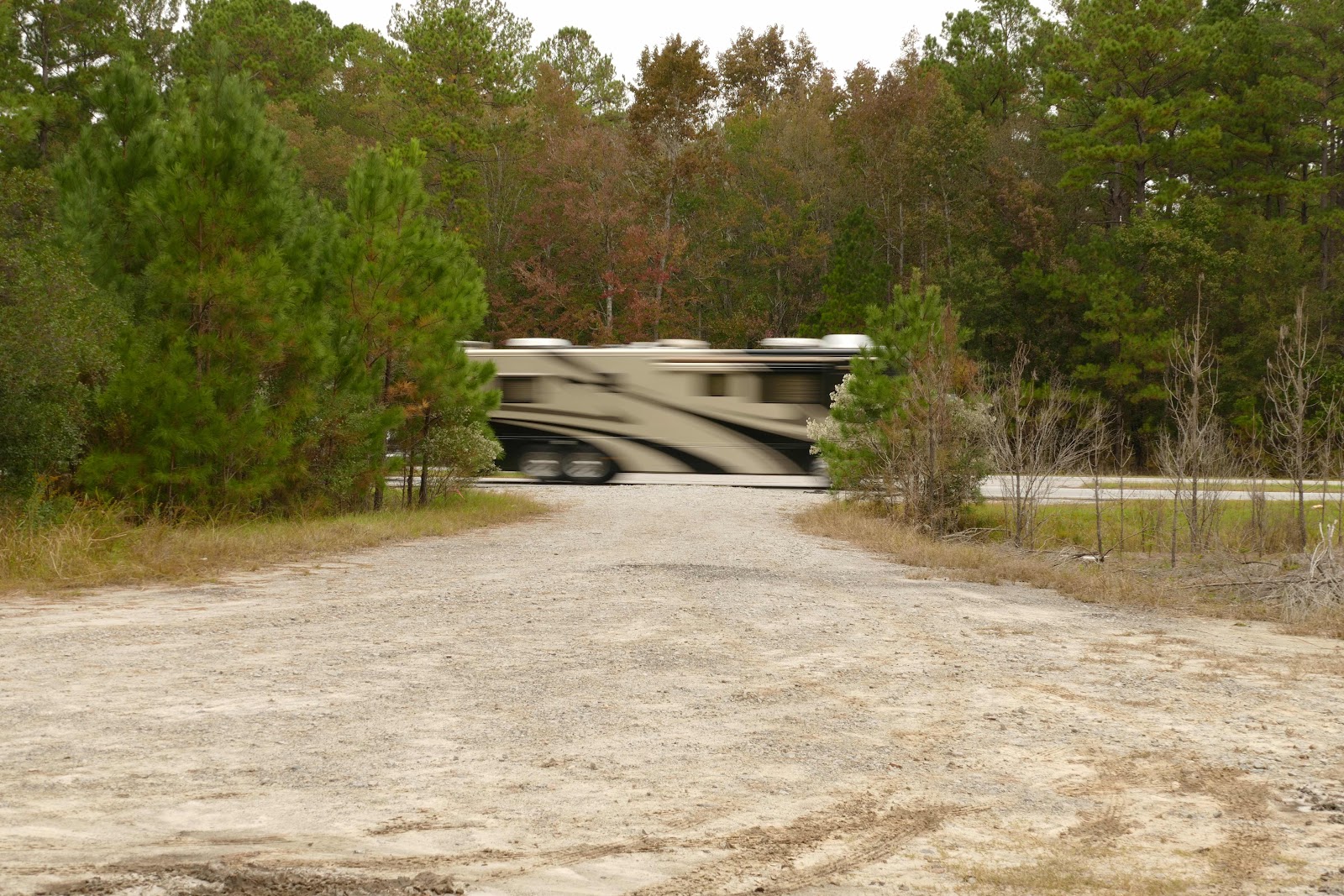 ...as I waited for Rusty to find his nerve and come running. 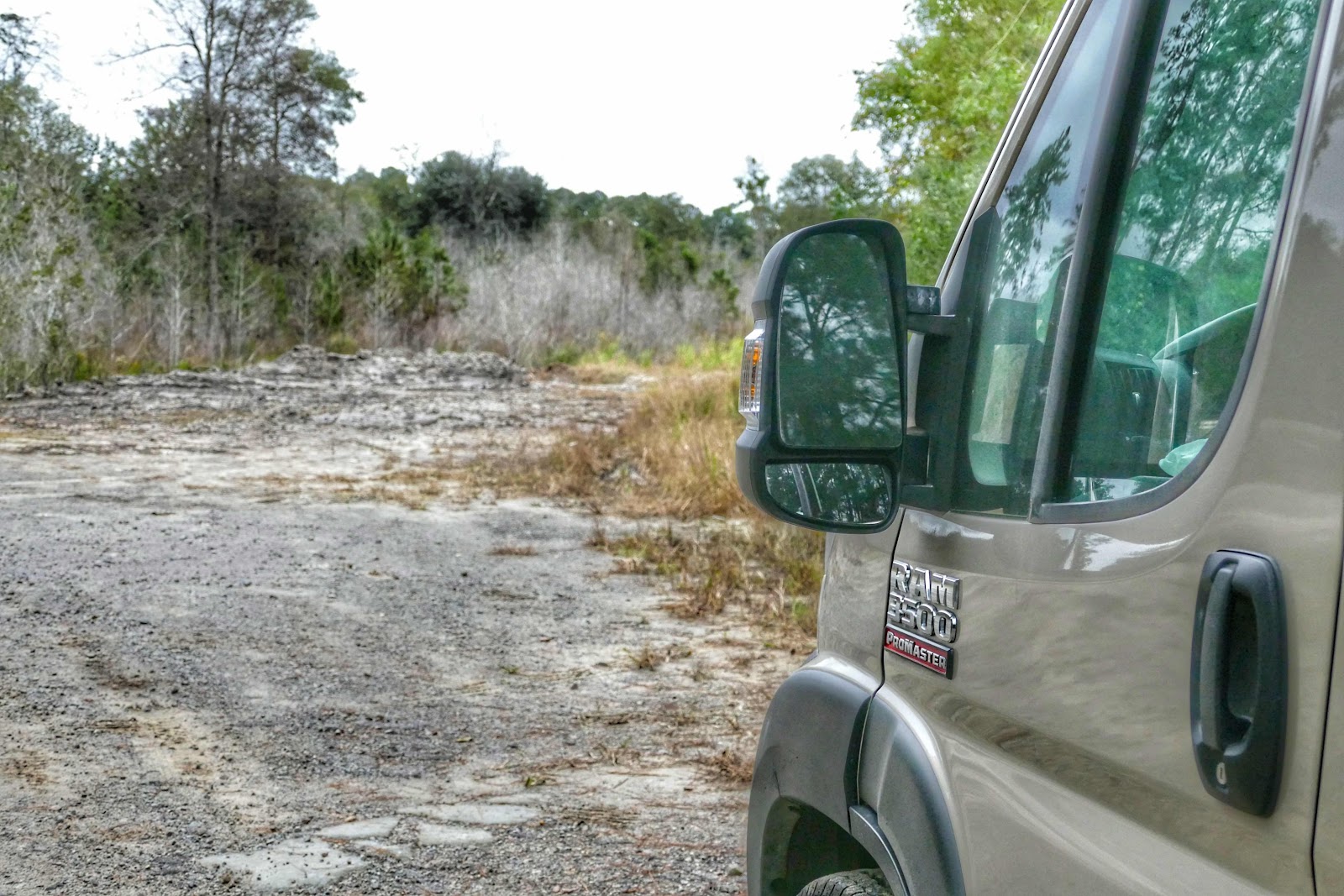 I expect that given time he will tear himself away from the security of his home on wheels but for now he likes to stick close to his familiar space. 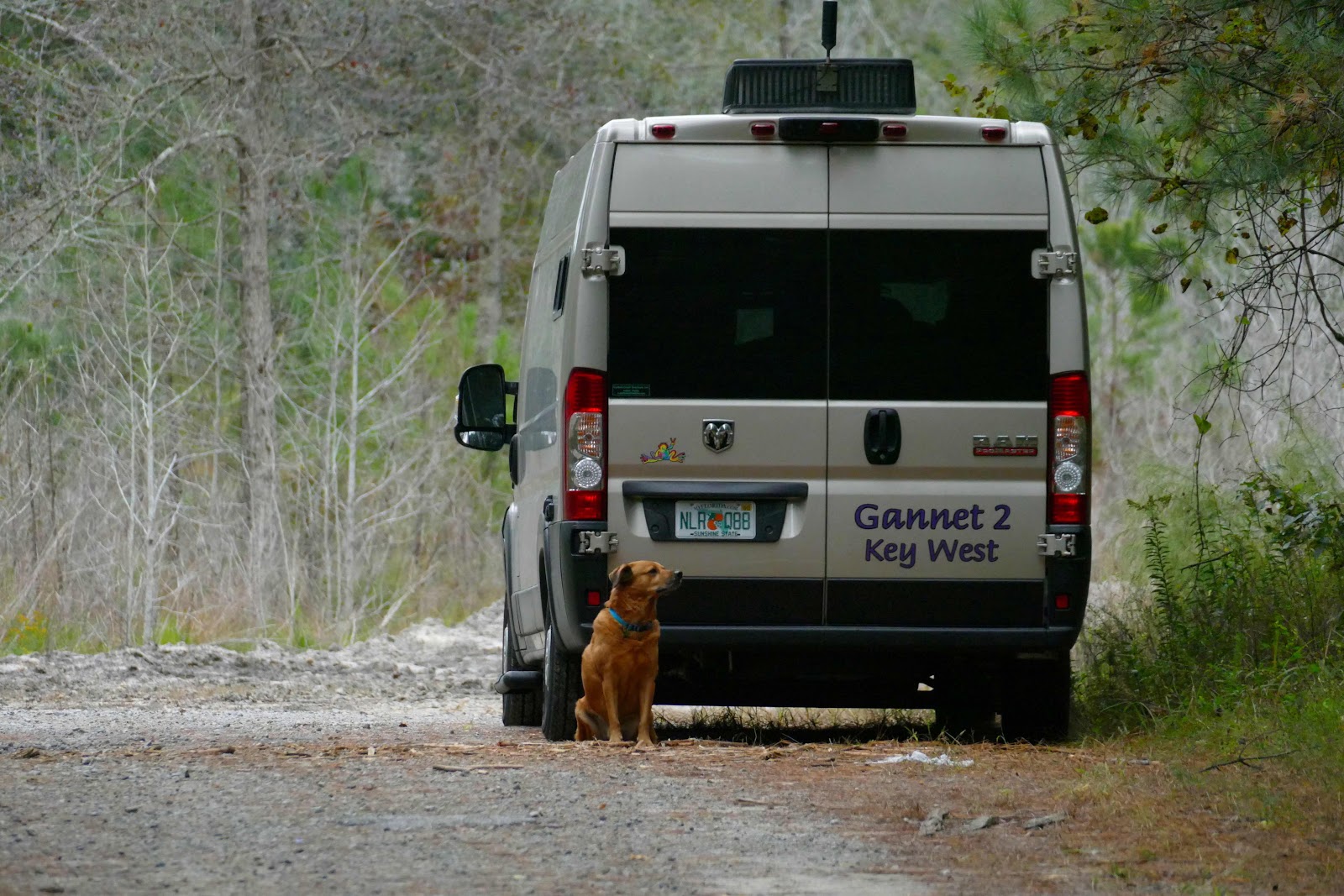 I have to confess much of this stop was to have been a chance to stretch my legs but I didn't get far! 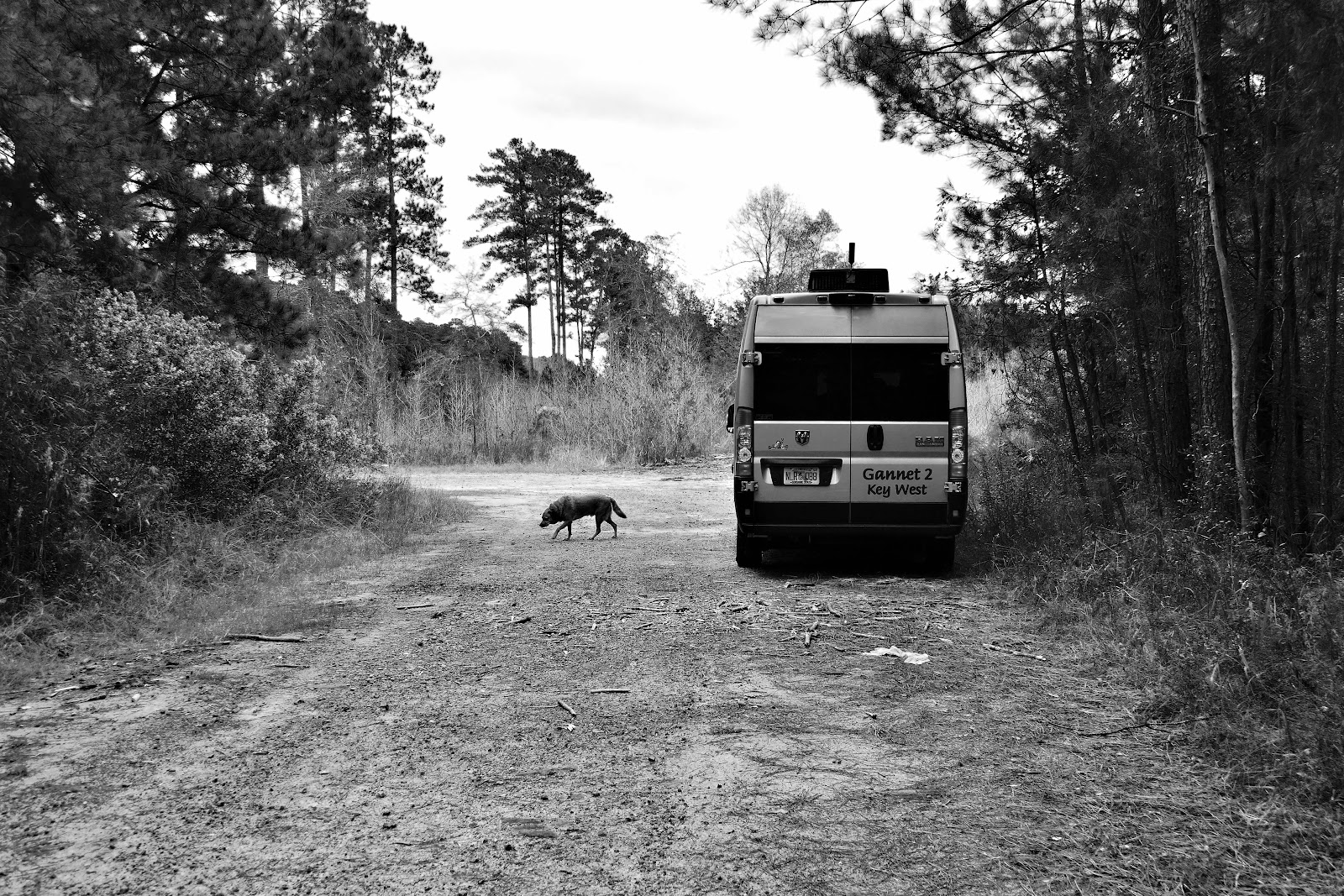 I had noticed on the drive up the always busy interstate that there was a vast number of recreational vehicles of every RV type flowing south. We appeared to be bucking the trend and pretty soon I pointed out to Layne that it was remotely possible we might be doing something wrong. "Never," she replied with confidence so we kept heading north on I-95 and I pretended to ignore the southern flow of gaudy camping machinery of every sort. I think also the population of kayaks in the Sunshine State may be tripling next month judging by their rooftop popularity. Maybe you get a free kayak with every vaccination? 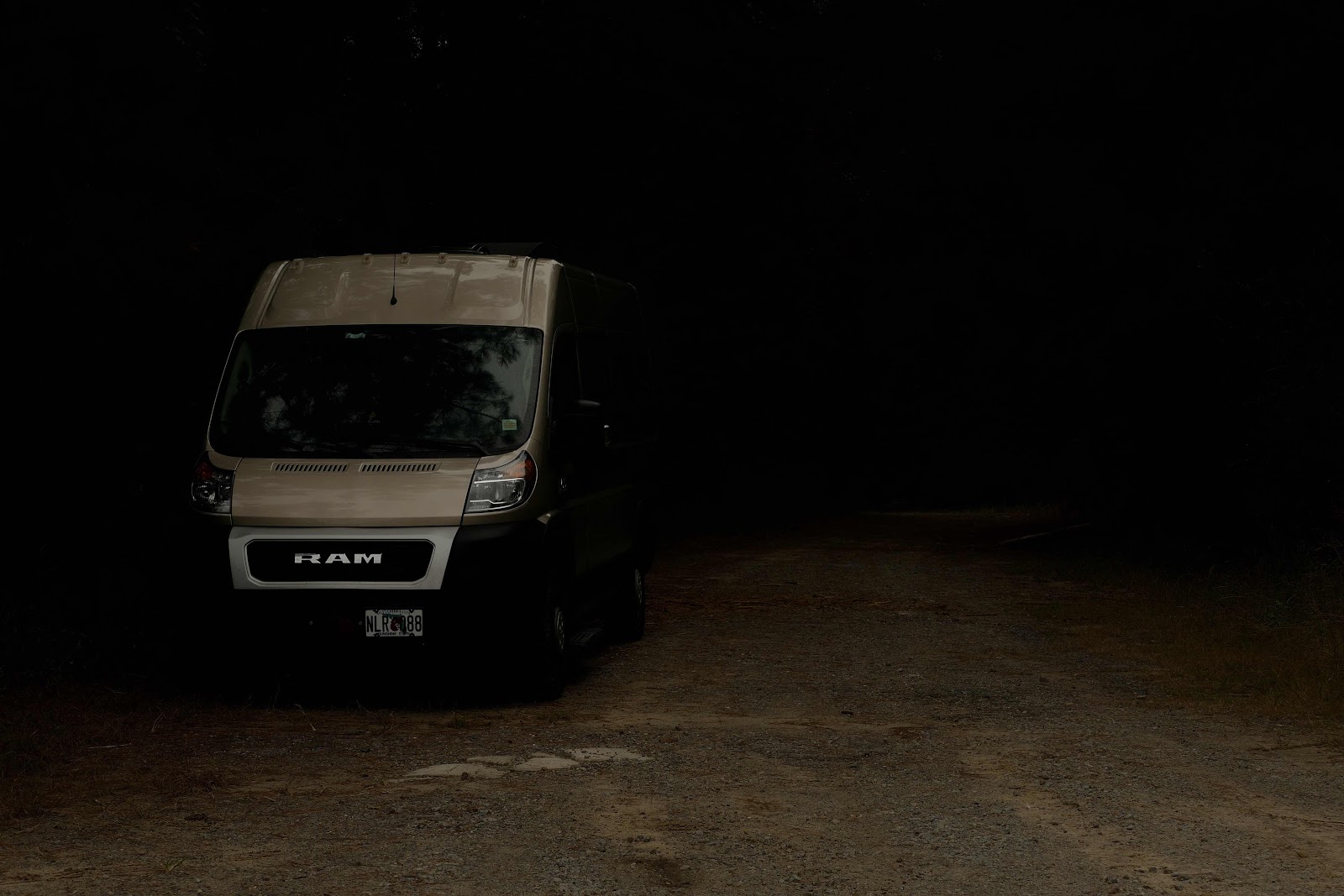 Eventually I took off by myself and around the first corner I found a wayward boat. Odd this I thought to myself eyeing its obviously dilapidated condition. I am on my way to visit one of the most famous sailors of the age and here is a stink pot high and dry and ignored for a very long time. As a road block, its apparent function I suppose it is effective strapped off to a tree, but I could have pulled it aside easily with the van's front winch...as a boat it appears past it's useful life. It was backed up by a no trespassing sign so I turned around, caught up to my distant dog and walked back to the mother ship. 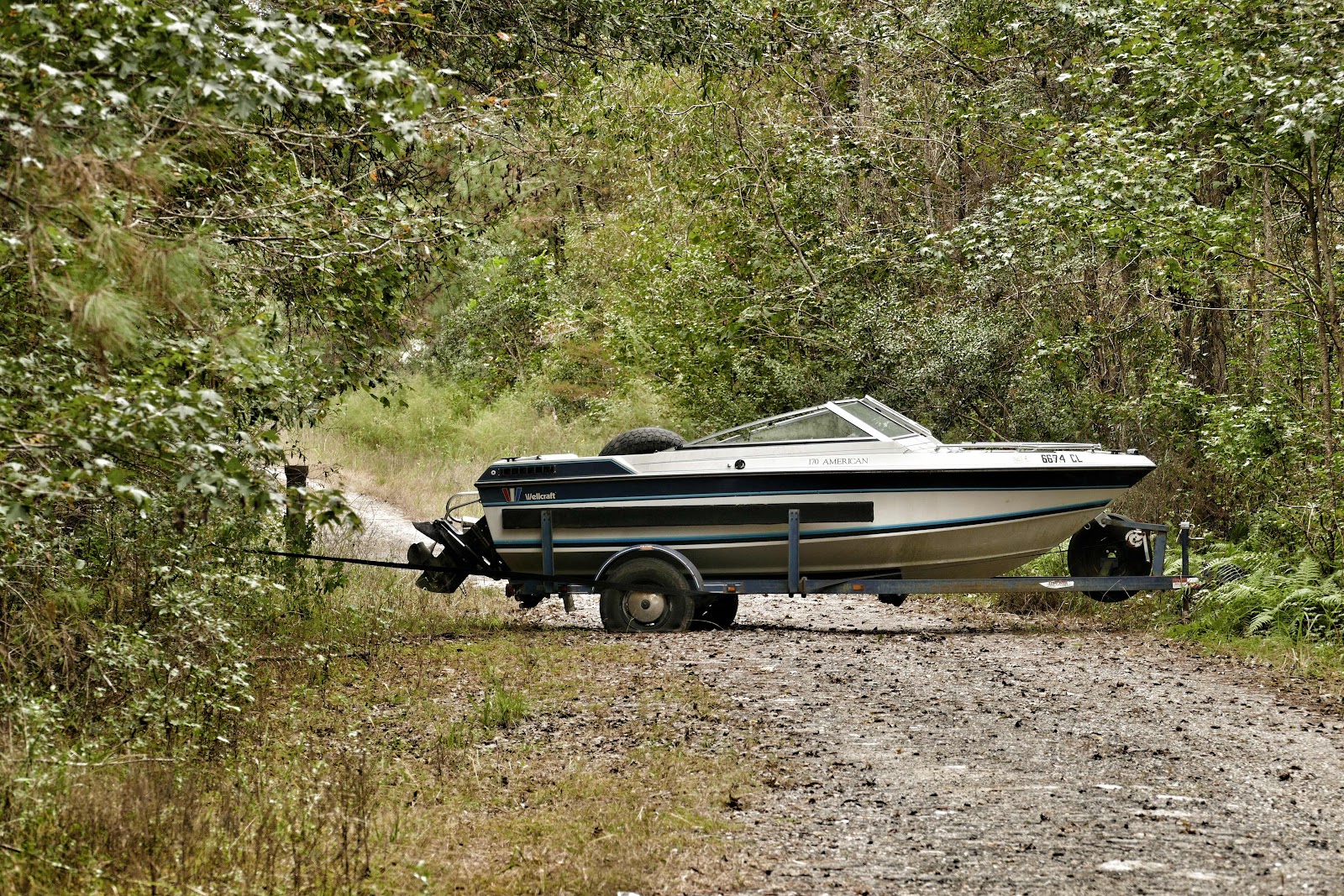 The gloom of the gray day added to the atmosphere so we piled back aboard to the accompaniment of Layne's log sawing competition. She never knew what excitement she missed. 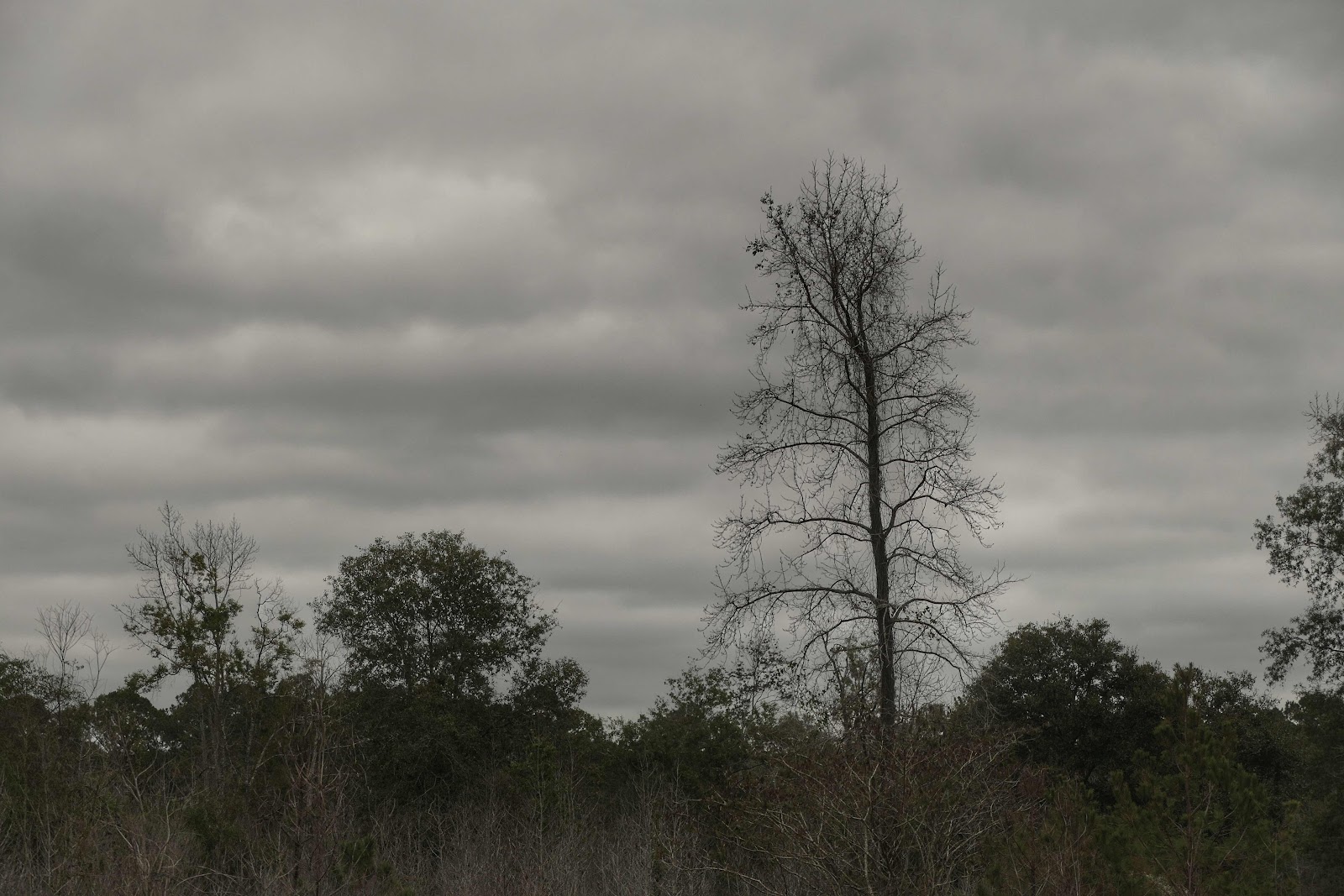 Adventure narrowly averted we fired up the V6 beast and aimed for an arrival dead on the proposed two o'clock hour. Definitely vans do better than boats on dry land though whether that can be claimed as an advantage depends on who's watching. 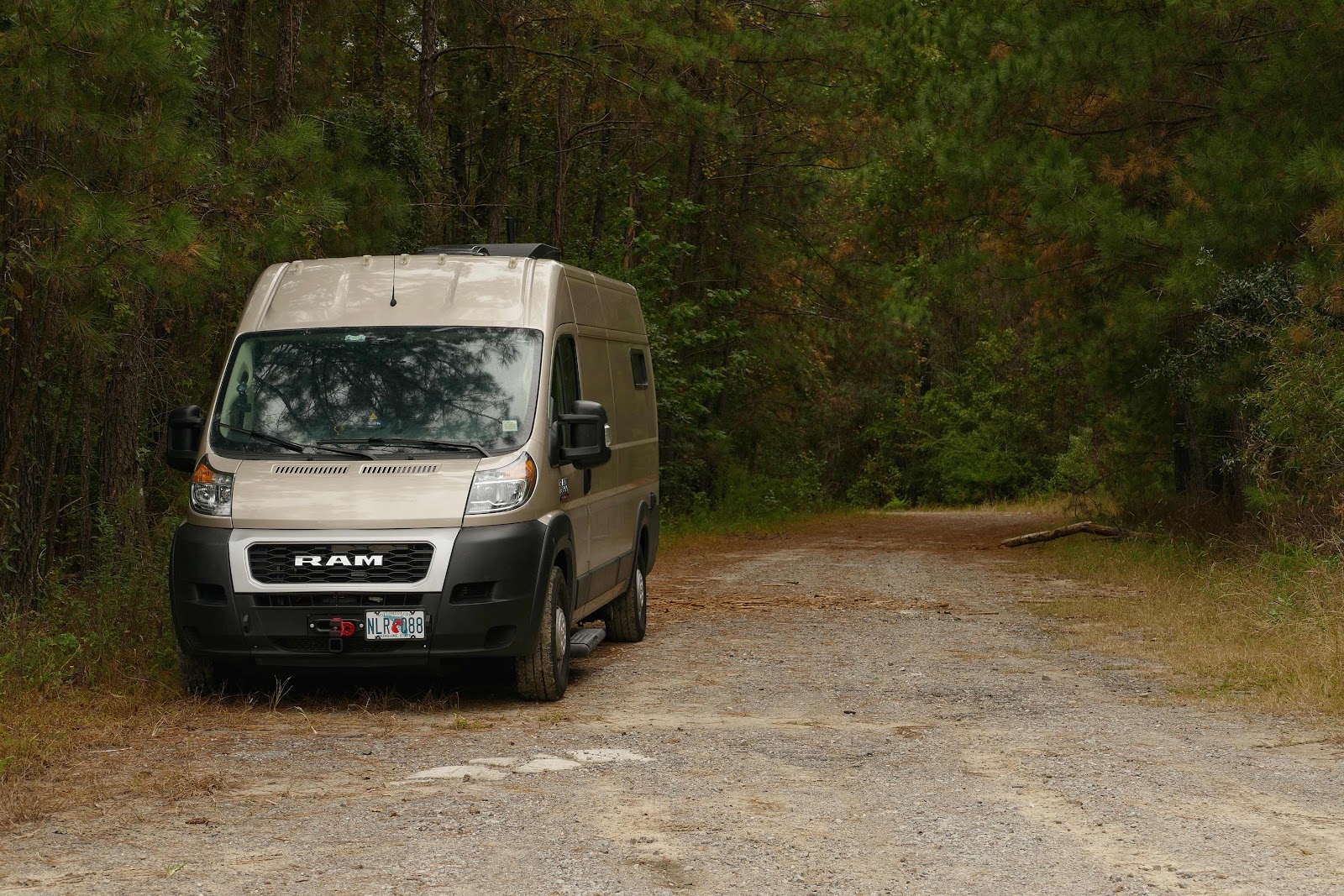 I shan't mention my theory to Webb a devoted adventure avoider and user of boats not on dry land but in water where they belong.
Posted by Conchscooter at 12:00 AM 5 comments: