This essay was originally published on the page in September 2009.


When I pass cars on the Overseas Highway I sometimes notice a box sitting on the dashboard, carefully obstructing the driver's view of the actual road with a picture of the road on the GPS screen. I wonder why drivers on the only road available even need a Global Positioning System receiver in their cars. Except of course to block their view. 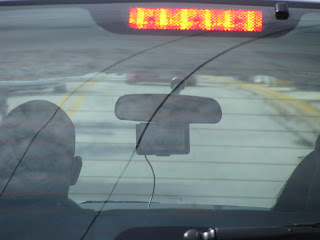 And when on a mainland road trip I am an advocate of leaving at least some of the route to chance, a concept that GPS cannot compute. Which is a rather long way round explaining how I found myself here and not at Matheson Hammock State Park as originally intended..."Here" in this photograph is the picturesquely named "North Canal Road" heading towards Biscayne National Park east of Homestead. 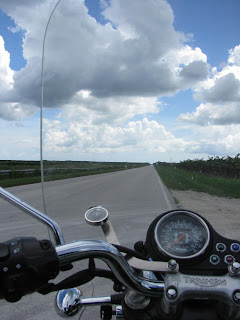 It was the day I left home with no fixed plan and no fixed route, other than the inevitable ride North on Highway One. After I took my pictures at Anne's Beach I figured it was early, not yet ten o'clock and I wasn't working that night so I pressed on. The (paper) map of Florida i carry in my saddlebag has only the faintest representation of South Florida on it and I really didn't look too closely. I followed Highway One north out of Homestead following my nose, ready to turn right or left as the mood and the signposts urged me. I paused under the cover of a gas station to fill up with premium and allow a rain cloud to move away while I drank with fizzy high fructose corn syrup with caramel and zero calories at 99 cents a can. I also chilled off with a frosty glance from a bandanna'd Hardly Ableson driver next door keeping his hot leather chaps out of the rain. 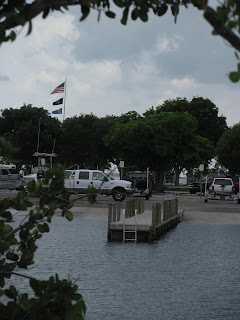 I followed a brown sign into the void of South Florida agriculture. "Biscayne National Park" it said, an organization that had yet to penetrate my consciousness. It sounded rather watery and I was game so off I went, leaving behind the four lane madness of pawn shops, car dealers and Latin hairdressers lining the highway. And indeed there is a marina next to the National Park, and for some unaccountable reason this large sub tropic spider got caught up in the web of my lens: 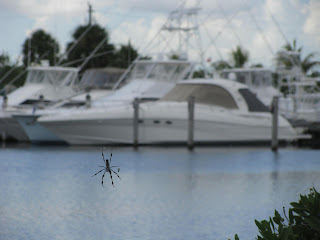 I am quite fond of spiders and bats and any creature that eats insects, though I like to leave them to their habitat as long as they leave me to mine. It is generally an easily digested agreement. 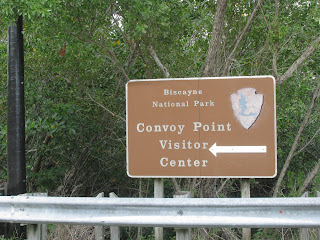 It was a hot overcast humid morning but there were a few cars in the parking lot, transportation as we shall see for some hunter-gatherers with fishing poles and a couple of other gawkers, tourists like me with nothing better to do of a weekday morning. I at least had a camera with me to record the immortal moment in this unheralded place: 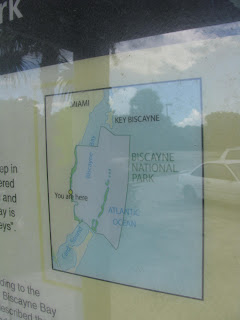 There was a massive imposing visitor center, but I wasn't in the mood for statistics (Biscayne National Park comprises x number of tennis courts if you stuck the bay end to end, that kind of thing) so I went for a walk instead, 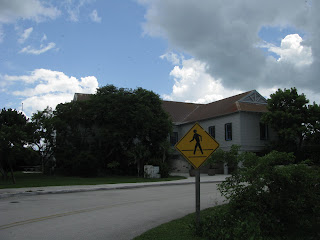 and took a look around at a National Park out of season, and thus peaceful: 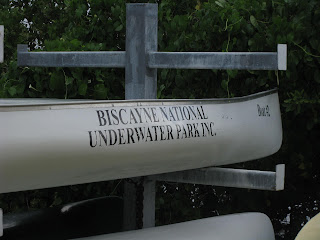 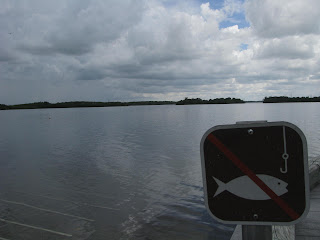 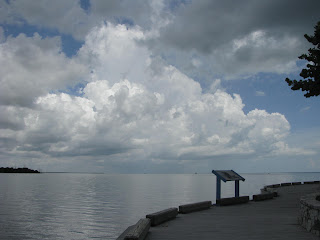 It's when you visit places like this that you know that people who hate the gummint are full of crap. I loved the combination of wilderness area spilling over into the crisp organized park ambiance on shore, the mowed lawns, the wandering boardwalk, with rocks growing... 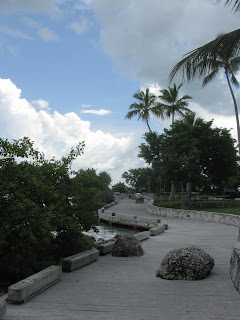 ...out of the post-consumer recycled plastic planking: 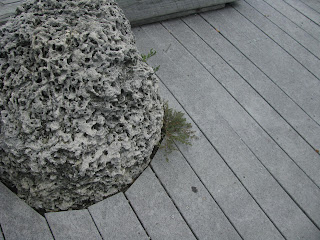 A playful conjunction of natural and not. All overseen by the heavy summer clouds promising more rain later: 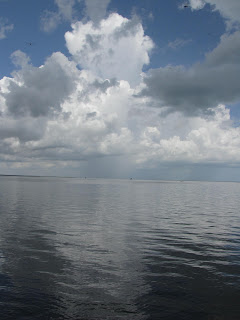 Where we would be, I wonder, without the tradition of open spaces and parks instituted a hundred years ago by the Federal Government? 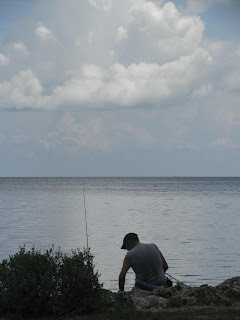 I envy the anglers their patient ability to sit and stare out at the waters of Biscayne Bay while waiting for good things to snaggle themselves on their hooks. Just above this woman's head the black spots highlighted against the bay waters are dragonflies. There were hundreds of them eating mosquitoes, the mossies repelled by my chemical layer: 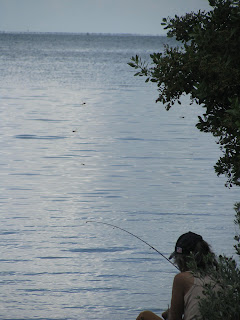 This fisherman was dangling a delightfully old fashioned cigarette holder: 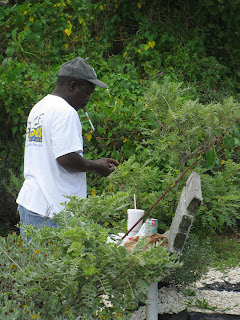 A little to the south of the Biscayne Park Headquarters lies Florida Power and Light's Turkey Point Nuclear generating station. FPL claims lots of good things from this plant, including warm water habitat for manatees in the winter from the plant's cooling system and a park around the plant has helped endangered American crocodiles breed and flourish in peace. However plans to expand the plant's generating capacity are being opposed at the moment because the cooling waters apparently produce salts that drastically change sea water salinity. Which I am told is a problem even as Miami gets hundreds of megawatts from these light water Westinghouse nukes, and gets the electricity without spewing carbon by-products into the atmosphere. 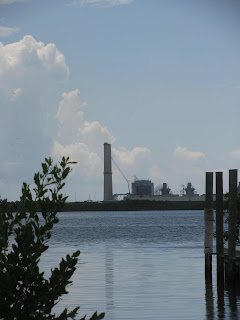 However should this thing decide to go mutant the neighbors have a warning system set up, just in case: 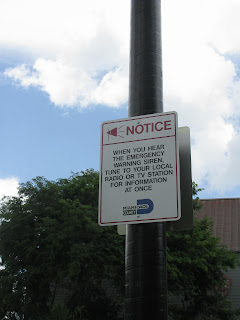 Turkey Point has been operating for decades with no history of major problems and it survived a direct hit from Hurricane Andrew in 1992. So I guess it's okay to paddle in the waters of the bay. I've done it and come away unharmed... 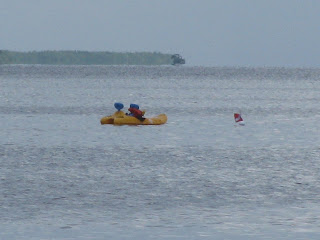 Camera-less tourists. I think they were foreigners which may explain that eccentricity. 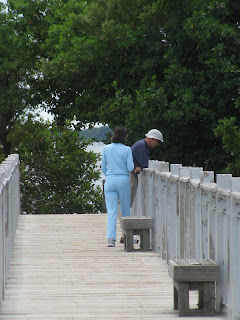 I watched the dive boat coming into the marina down a long, well marked channel. The coastal waters around here are shallow enough it would be difficult to drown a grasshopper. 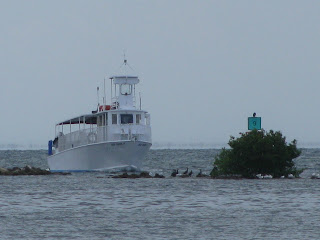 Then I got inspired to walk all the way down the causeway that sticks out into the bay. I crossed the path of the camera-free tourists here and he gave me a decidedly Francophone "Bonjour" about here, where they gave up and turned around. I pressed on. 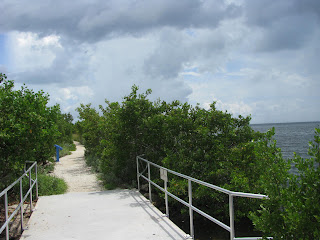 And what a magnificent edge this is. I love the look of the flat waters of summer: 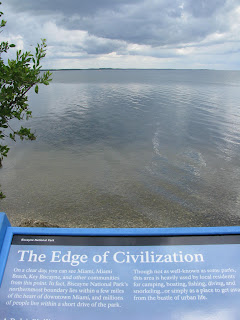 There was somebody out enjoying the waters of the bay. I had some memorable sails on Biscayne Bay when I lived on my boat anchored at Jack's Bight on the Coral Gables waterfront.

Even modest breezes give good performance on protected shallow waters like these. 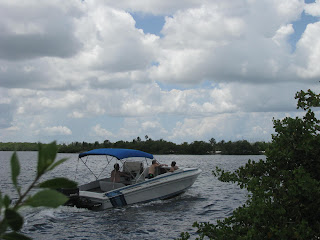 I was getting near the outer end of the little causeway and wasn't I surprised to see Spencer Tracy organizing his lure. I had been under the misapprehension the actor died years ago: 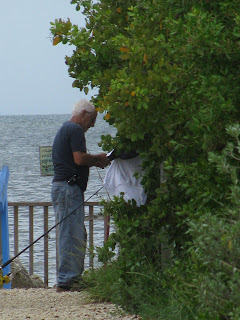 Up close he was actually fishing with a younger Latino, quite possibly his son. They nodded amicably and kept their eyes on their lines. I stared out at the empty waters for a minute and pondered the meaning of this sign: 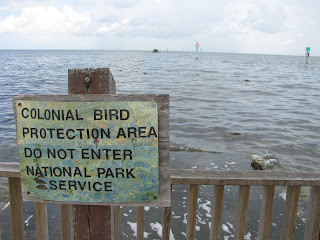 Far to the landward side lay the magnificence of the visitors center and the footbridge out to this causeway: 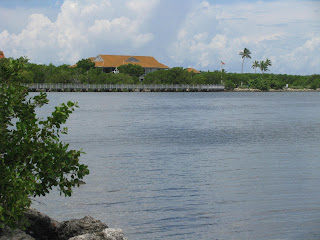 I have been hunting for manatee desultorily for some time and I have no doubt I will try again this winter. This was the best I could do here in summer: 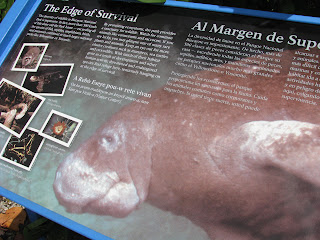 It was too hot to lounge and enjoy the day so I stood in the shade and ate a granola bar and drank some of my home-collected rain water from a carbon neutral flask and got back on the road back to civilization. Here represented by the Homestead Speedway track, a castle lurking in the middle of the fields, suspended between the bay and the noise of the city of Homestead. 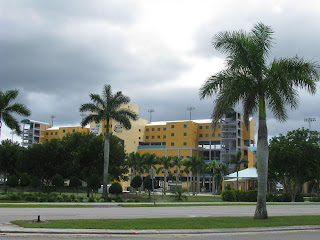 I dodged rain clouds and got back on the Highway home, arriving two hours later, only slightly rained on, enough to be cooled down, but not enough to stop and put on my waterproofs. Just think, had been following my GPS to my real destination I'd never have found this place. Matheson Hammock will still be there, when I get it together to go, but now I need to plan to come back here and wander the lush visitor center. And I won't need GPS to show me how to back track there.

Conchscooter
Key West, Florida, United States
An archive of more than 5600 photo essays about Keys living since June 2007. My thanks to all those who have made up the 2.8 million views and 20,000 comments received by this page over the years. Please feel free to reproduce any original photo as long as you give Key West Diary the credit.

Live passionately even if it kills you because

something is going to kill you anyway