To my eternal shame I know nothing about Rome's Jewish history. Correction: for most of my half century on the planet I knew nothing of the life of the Chosen People in Italy and most especially in Rome. Now thanks to Mrs Goldman's desire to explore all things Jewish with her very goy husband I can tell you al you ever wanted to know about the Hebrew population's history under the Popes.

You might be surprised to know that generally the popes weren't the least bit sympathetic to the unfortunate unbelievers who lived in their midst and had lived since well before Christ was a glimmer in one of his father's eyes. They created a ghetto in the 16th century to keep the Italian rite Sephardim which is a separate and unique Jewish rite I have discovered today, from the standard Sephardim who were kicked out of Spain and took refuge in Rome.

When the pope was finally dethroned and confined to the Vatican in 1870 the 5,000 Jews confined to an area you can circumnavigate on foot in ten minutes, were free once and for all. This single street housed up to five thousands Jews in the 17th century.

Even though the Ghetto was expanded in the early 19th century to accomodate the increasing size of the place. But not by much.

Today there are 30,000 Jews in Italy and half of them in Rome where they have 17 synagogues to choose among. Their ancestors closeted on the back of the malarial river left behind a huge amount of history and a massive "new" Great Synagogue completed in 1905 and which now marks the site of the old ghetto on the east bank of the Tiber.

The story of the ghetto is the usual one of crowding, poor sanitation, poverty and petty aggravating rules limiting travel and simple human dignity. This doorway was blocked off when the ghetto was expanded to prevent jews and goyim from mixing and jews were not allowed to have christians in their homes. The doorway has remained as a window:

The idea was to show Christians how crappy life was for non believers and how good life was if any Jews chose to convert. I'd have converted had I been around and most likely so would more Jews had the idea of eternal damnation not been used for crowd control.

The ghetto survived the German occupation of 1943-44 with the inevitable deportations and cruelty. Signs on the walls attest to land ownership restrictions and the second class citizenship of the residents through the centuries of oppression. The signs are all still there though mostly forgotten except by the visitors on their guided tours:

It looks to me today as though the modern Jewish Quarter is a relic kept alive for the pleasure of North American visitors.

English is the expected language on the street. Nevertheless I'm glad I went, as my wife helped me fill a serious deficiency in my education. And I'm glad the ghetto is still there.

- Posted using BlogPress from my iPad
Posted by Conchscooter at 4:51 PM 2 comments: Links to this post

I'm in Italy as you check out this picture, showing my wife the Eternal City where I used to ride a motorcycle on my visits to the Big City to hang with my cousin when we were kids. Meanwhile GarytheTourist let me pick through hundreds of his vacation pictures of my favorite city. 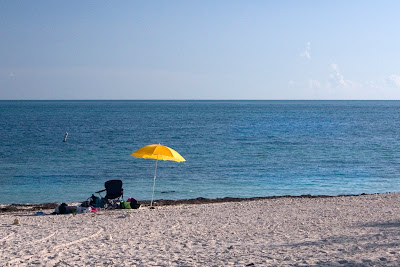 Key West doesn't have the best beaches in the world but a vacation in the Southernmost City without a day at the beach isn't a ...vacation.
Posted by Conchscooter at 4:01 PM No comments: Links to this post

"What day is it today?" I asked my wife as we strolled the riverfront checking out the dust catchers on display in the stalls.

"It's still Monday " she replied " but almost Tuesday by now"
"Bugger me, the longest day" and it had been. Consider we arrived in Rome at nine in the morning and were on the train to the city by 9.30 after a mad run down the platform.

We walked what seemed like miles through the dusty station past the crowds of hawkers and touts and lost souls waiting for God knows what to our hotel on Via dei Mille a couple of blocks away and immediately dumped our bags and set off to explore the city.

We took a tour bus to start, Rome's answer to the Conch Train so my wife could get the layout of the city, and we stopped to admire the history of the place.

"I never did get why Americans were so hung up on the old buildings" I remarked to my wife who was raised in California and she looked at me like I was stupid, which perhaps I am sometimes.
When my wife was last in Rome on her first ever visit in 2007 we did a blitz tour of the city with my buddy Giovanni on motorcycles and my wife felt she didn't quite get to see the Eternal City on his rather superficial view of being a tourist. This time I promised her different. I picked up the scooter still on Monday and off we went for the long awaited night tour of the city.
I have to admit the €5 ($8) GPS is an absolute blessing for a rider who last hung out in Rome 30 years ago.
"Turn right in 200 meters" the voice says imperiously. Then when we miss the turn she says sweetly "Recalibrating" which means "The dork driver fucked up- again" and off we go the three wheels of the MP3 eating up the cobbles and potholes and tram lines like they weren't there.
The tour bus showed us the major sights, the Colosseum,

The Altar of the Nation

St Peters which my Jewish wife saw in 2007 and feels no need to revisit,

But at night we took off for the alleys and back streets looking for fried fish by way of a few more sights:

Campo De Fiori,and all it's confusion. I don't think scooters are actually allowed here, but hey we're stupid tourists and I suddenly forgot how to speak Italian. I like being a visitor.

St Peter's by night which she thought looked quite different:

But that's another story for when the steam powered Internet gives me access....

PS Thank you Gary for the home pictures while we are away and thank you Chuck Licis for helping me get Blog Press on my iPad to make remote posting possible.
- Posted using BlogPress from my iPad
Posted by Conchscooter at 8:51 AM 3 comments: Links to this post

I'm in Italy as you check out this picture, showing my wife the Eternal City where I used to ride a motorcycle on my visits to the Big City to hang with my cousin. Meanwhile GarytheTourist let me pick through hundreds of his vacation pictures of my favorite city. 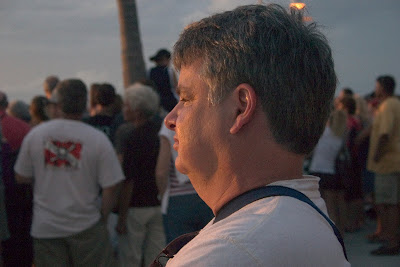 The man himself, Gary, enjoying one more Key West sunset.
Posted by Conchscooter at 8:01 AM 1 comment: Links to this post

"If you catch me sitting in a line of cars you need to pinch me" I called out to my wife. She was riding pillion on the 250cc Piaggio MP3 scooter we had rented for two days to explore Rome and it's suburbs, but I was not pulling my weight in the Roman traffic. Too much Florida was still coursing through my tropical veins and I was acting polite where Rome's car drivers expected me to cut and thrust my way through traffic. Showing cages mercy was just confusing them as they expect scooters to rip them to shreds in the congestion. No more sitting passively waiting for a green light dammit! We're not in Key West anymore. Check this street scene out, scooters and a car approaching a light:

Car slows for the traffic signal but the scooters move in and surround the hapless driver. I took this sequence of pictures from the top deck of a tour bus, by the way.

Then the light changes and the scooters swarm ahead.

What's interesting about this technique is that cars yield to scooters, they expect the mad rush and they defer to scooter riders in a way SUV toting Americans would never do. And the scooters actually treat the Rome traffic like it was an amusing obstacle course. Pedestrians and scooters dodge between the lines:

Over the lines into oncoming traffic :

Weaving between cars stopped at lights:

And between lanes of cars:

Traffic can be horrendous too so riding a scooter is a job for people who need to stay mobile, and not just scooting enthusiasts:

If only I can get used to being thoroughly rude on two wheels. That I can do, I just have to get back in the Italian riding groove of my youth and that takes a couple of days.

We have some great riding to show in the days ahead around the Eternal City, if my steam powered hotel wif-fi will ever let me post...

Posted by Conchscooter at 3:00 AM 4 comments: Links to this post

I'm in Italy as you check out this picture, showing my wife the Eternal City where I used to ride a motorcycle on my visits to the Big City to hang with my cousin. Meanwhile GarytheTourist let me pick through hundreds of his vacation pictures of my favorite city. 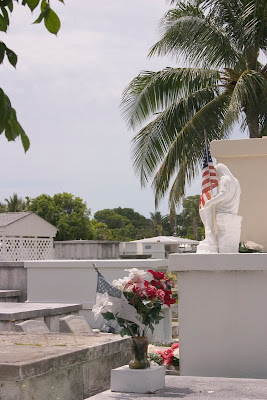