Shannon asked me Saturday night where did I suggest she might want to go with her parents when they visit next week. I thought about it and because she wanted to take them on a road trip, which is to say drive them well outside the city limits of Key West, I started by suggesting Sparky's Landing in Key Colony Beach, well out of range for people who think 50 miles is beyond the pale...No Name Pub? Been there... Square Grouper? Done that...Kiki's Sandbar? Huh? Well I said it's new so its clean, as her mother is germ-phobic, but it has a nice Keys atmosphere and pleasant water views...Whatever she decides I wish her luck.  I hate giving advice so I wish her well on her trip. 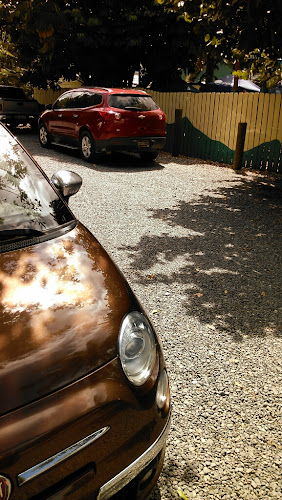 As it happened we had a lunch date Sunday at No Name Pub where we haven't been for a while, but it isn't far  from our house so it was a short drive with the roof open on the wife's Fiat 500 convertible. This is the first convertible I really like so the drive at 10 minutes was rather too short and as I had to work that evening I couldn't order Yuengling draft to wile away the time we had in hand waiting for our key West friends who got hammered by the gruesome winter traffic on Highway One. I drank a lot of iced tea instead. 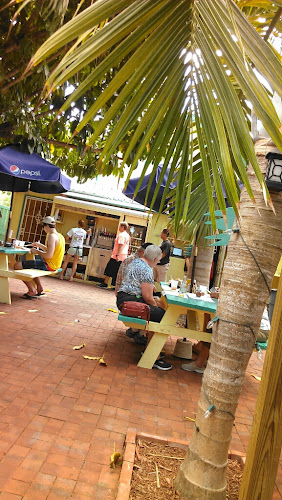 I guess it really has been a while since we visited No Name Pub as I had never previously seen the outdoor seating, and very nice it was too. We got the last table open when we walked in; the place was packed as usual. Stacey and Steve made it in good order, complaining as my wife and I frequently do that traffic on the Overseas Highway all too often just crawls along. 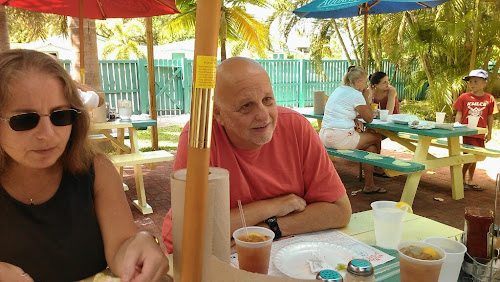 It was a perfect day for an outdoor lunch, sunny bright but not too hot and with plenty of shade both human made and from the many trees. I always wondered why eating here was not allowed. That era has ended, I guess. 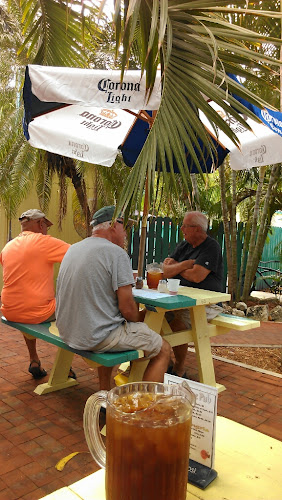 Three of us got fish and chips which  included the dollar fries, round slices of potato instead of the usual French fried contraptions while Stacey got a calzone that appealed to her native New York nature. A lifetime spent in Syracuse was rewarded by a giant football of pastry filled with molten cheese. 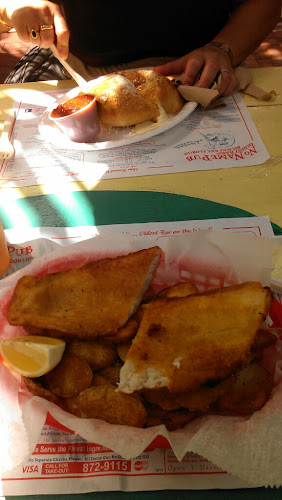 This sort of life is why people move to the Keys and Steve has retired after a life of teaching law at the university in Syracuse, a life he enjoyed but whose famously harsh winters tired him. However they are neither of them willing or able to leave New York behind completely. This summer they will return back north leaving those of us that live here to enjoy the tranquility of low season. 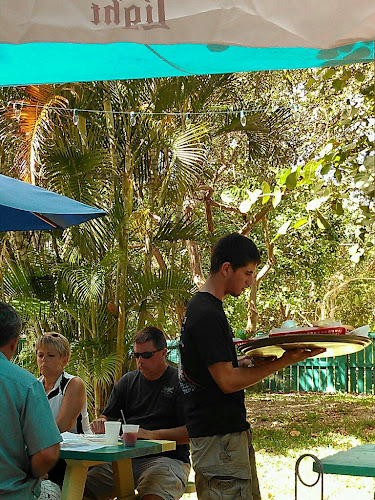 We dawdled over lunch for a couple of hours I think and eventually we dragged ourselves away from the wreckage, fifteen dollars apiece with drinks and tax etc...and made our way back through the inner sanctum of the venerable pub. In summer when its not packed on hot humid weekdays the dark cool interior will be welcome but Sunday was not the day to be packed indoors like a sardine. 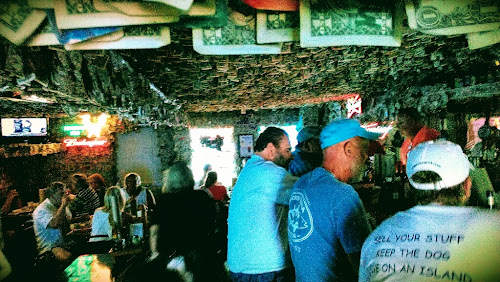 A pleasant change for us to come here, even as we read of continuous never ending snow and storms Up North. 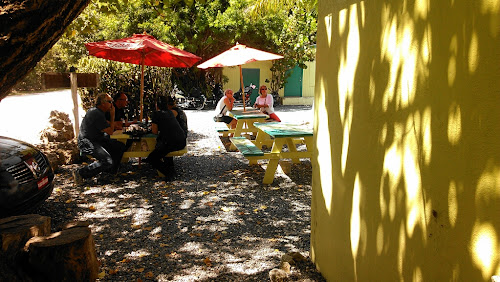 No Name Pub is not high class eating or innovative food or spectacular beer lists. Its just a nice place to hang out and enjoy the weather and the relative peace of distant Big Pine Key. Its really not that hard to find.

Posted with Blogsy
Posted by Conchscooter at 11:16 PM 2 comments:

I work this entire weekend, every night, Saturday Sunday and Monday and that's okay. However my heart did sink when I went downtown with my wife and we sat at the Courthouse Deli a con leché each and watched the world go by. We were pretty alert so we soon figured something was up with all the greenery. 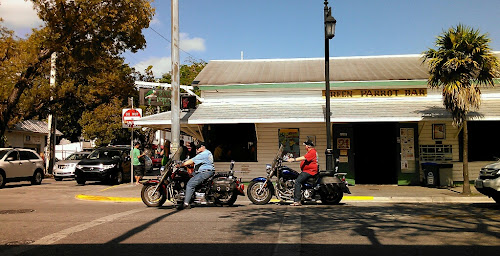 The plan had been to sit in comfort in the remains of the cold front breeze and listen to the sound check from the Green Parrot but no such luck. The bar was as silent as a bar could be when hosting a St Patrick's Day crowd. 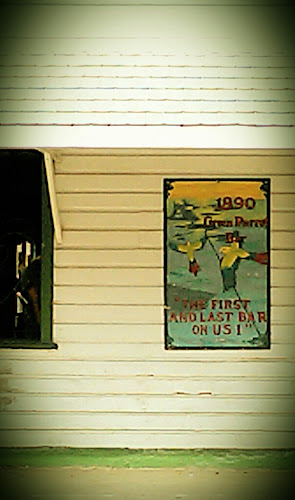 I have to say that it seems to me that the crowds at these events seem to be getting older and older and far from the sun dappled youth of just a few years ago we seem to be getting sun dappled middle aged crowds at these types of events. I am not armed with statistics, just casual observation but it makes sense to me that young people, caught in this endless non-recession, can't afford to spend time and money in Key West as they could in the past. 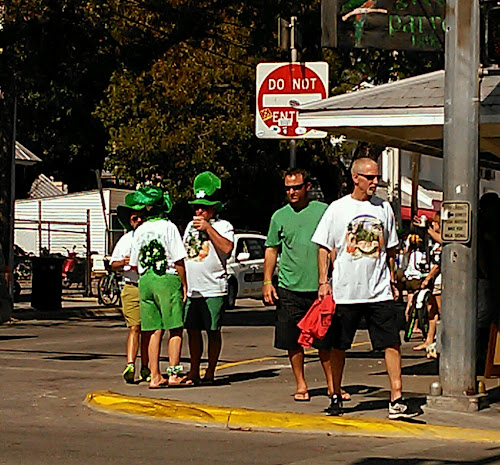 That is not to say Spring Break isn't happening, that essay is for tomorrow, but things like St Patricks Day, observed on Saturday the 15th(!) people seemed older. Just like Fantasy Fest...This young dude seemed intent on mowing down his elders and intoxicated betters with his scooter: 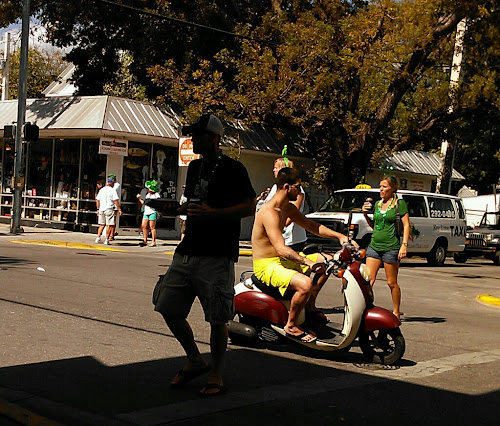 The city commission has been debating tightening up Fantasy Fest rules for this October, which is already in the planning stages. Some locals, led by former city commissioner and arch-Conch Harry Bethel want to see rules on nudity swept away. Body painting seems inadequate to them even though the crotch and backside crack have to be covered at all times, one hopes good taste makes that obvious but not so. 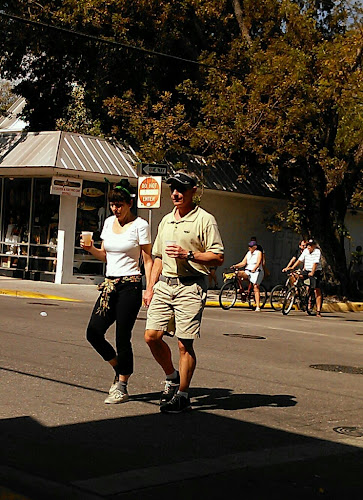 And one can sympathize with people whose home town gets turned into a display of public bad taste each Fall for a week, but their clamor for toning it down is falling on the very deaf ears of the people who run the bars and make the money. City commissioner Mark Rossi who owns the Rick's /Durty Harry's/ Red Garter complex on one entire block of Duval Street was loud in his condemnation of the rules proposed by the owner of Fausto's Jimmy Weekly. It is weird to me that a city commissioner with an interest in these matters is not automatically recused but to the contrary Rossi told the newspaper he ran specifically to defend his interests! 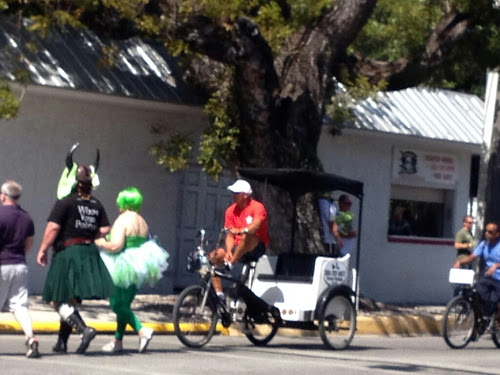 So far opaque covering for woemn's nipples is still required and body paint at least must be employed to cover everything as usual. For my part I take no joy in most of Fantasy Fest. It is a part of this town's annual series of summer (low season as was) events and there it is. If it went away I would not cry too hard or too long, and these days even what used to be known as the local's parade has become, by my rather tired standards, a bit too popular and thus crowded. 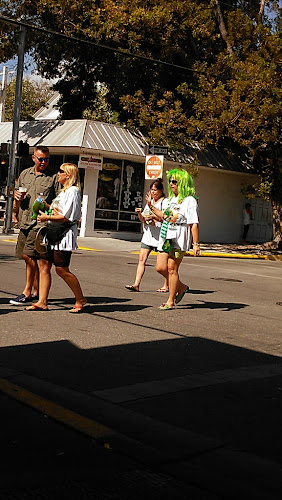 The city's noise ordinance was also up for change recently and the city commission grappled with that for a night. That debate brought to the fore some rather convoluted thinking and unexpected public alliances. Supporters of requiring quieter sound levels downtown found themselves attacked not as saviors of public peace and quiet but as job wreckers. Reduce permitted sound levels the argument went and the town will become a desert, bars will close early each night and people will be out of work. 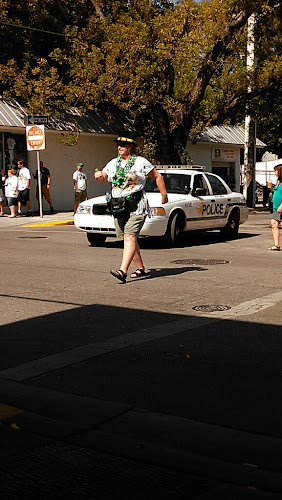 Never mind that long time residents pointed out they have lived near Duval Street longer than there has been a tradition of noisy bars...The noise ordinance didn't get changed either. It would drive me mad to listen to that cacophony every night I know that. 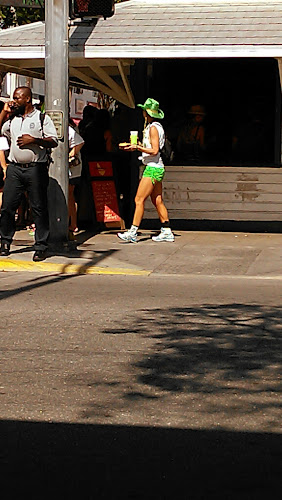 Things aren't easy to change around here. A few years ago there were proposals to change residential parking rules in Old Town and that debate went back and forth for a few weeks. In the end nothing changed. A few too many permits issued to allow people to park in residential spots were rescinded and that was that. Which is why my car has Monroe county stamped on the license plate. It increases my opportunities to park when I take my car downtown. Open container laws are flexible too, though walking around with alcohol is illegal it takes discretion to be enforcing codes sometimes. As long as people are cool I am okay. I really dislike everyone's need to be annoyed with their neighbors all the time. I try to mind my own business. 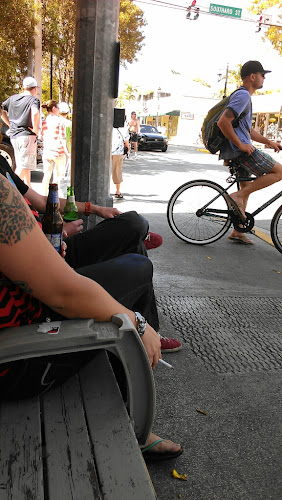 I observe scooter rentals riding around not too competently and with no hope of escaping road rash when they fall, but they are old enough to run their own lives: 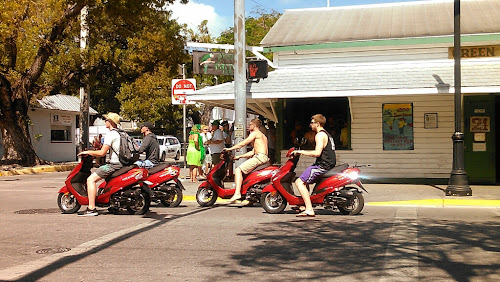 We sat for a long while nursing our Cuban coffees and watching people from our spot on the deli bench. It was a lovely day yesterday, fresh, not too hot and with a light cool breeze. No air conditioning needed. We had been to see the movie Omar set in Palestine. It was an Oscar contender me in my opinion should have beaten The Great Beauty from Italy which was a self indulgent piece of fluff by comparison. And. I enjoyed the Italian movie greatly but Omar was brilliantly written, moving and tremendously powerful as a love story, a thriller and a commentary on the Israeli mess in Palestine. If you see one movie check out Omar at the cinema. It's that good. 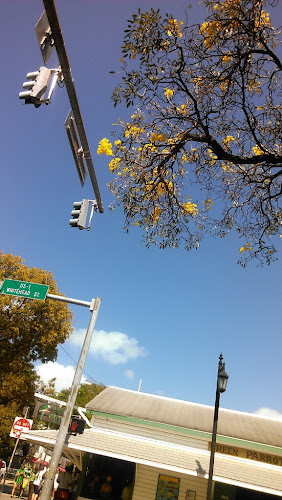 I always wanted a beach buggy like this when I was a kid. I'm not sure what I was thinking but I saw this one and I recalled that long lost feeling of desire for one. 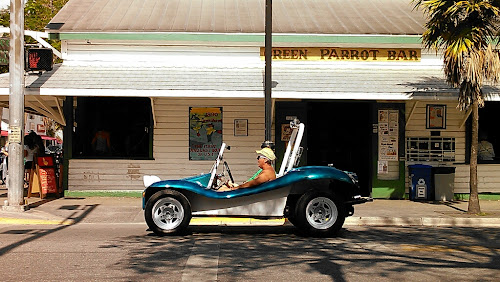 St Patrick's Day was very pleasant from across the street at the Green Parrot. A surprisingly calm oasis in which to think and reminisce and watch people stumble. 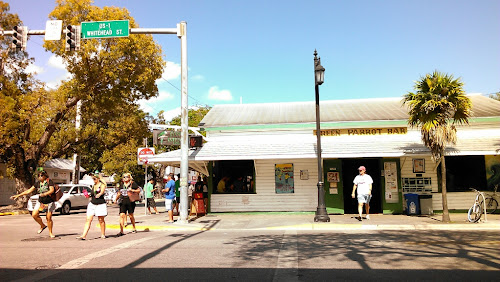