Everything Happens For A Reason

I  had been to my Broga exercise class yesterday lunch time and as I was riding home from Key West I came across a rather eerie accident scene on US 1 near my home. I turned off the highway on Cutthroat Lane and stopped to take this picture below. Looking North,  Key West is 23 miles to the left and Big Pine Key is six miles to the right. The vehicles involved in the wreck had been towed already and all that was left was road workers sweeping up the damage: 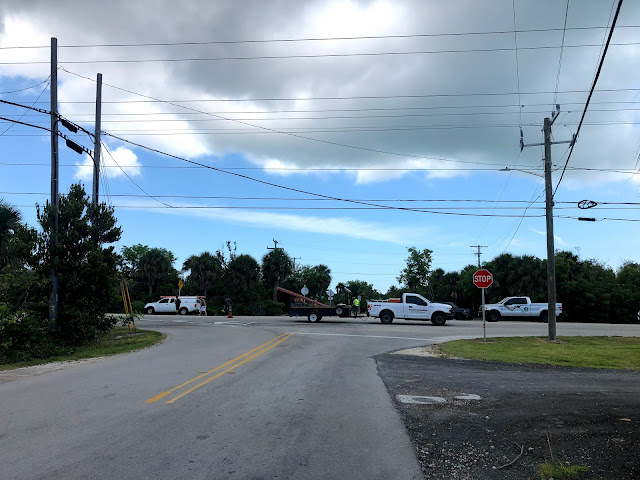 Here is a screen shot of the location, with My New Joint the upstairs tapas bar of the famous Square Grouper Restaurant. What made it all so creepy for me was that this was the exact spot where I wrecked last August 31st. At that time I was on my way to work and had just turned left toward Key West from Spanish Main Drive. I got to the intersection in a slow moving line of traffic and a car pulled out of Cutthroat lane just above the big red dot and tried to dart across the highway. In so doing she cut me off and I flew over the hood of her car, cartwheeling toward the line of guests waiting to have dinner at Square Grouper. 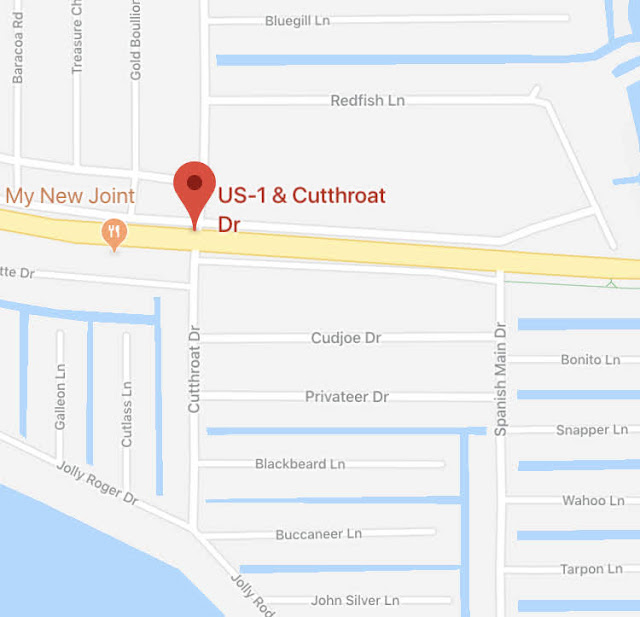 This picture of my poor old Burgman 200 was taken looking north across US1 at Cutthroat Drive in the background. This was the scooter that three weeks earlier took me to Niagara Falls in 32 hours on my 1500 mile Iron Butt ride. I had wanted to see how long distance riding would work and it went very well, as I rode a total of 3400 miles that week without a problem. I got home and this happened: 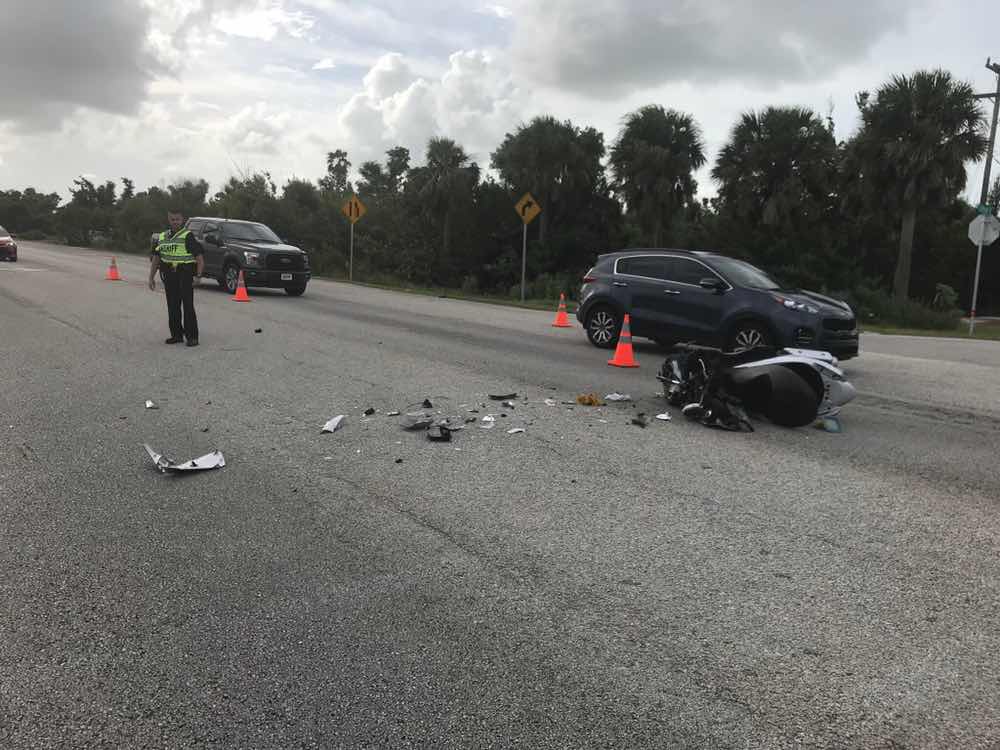 You'd think seeing this repeat action would have freaked me out and it did a bit, at first. Then I started to think to myself: Hey! Today it's not me...I get to go home... Which was a thought that quite cheered me up. 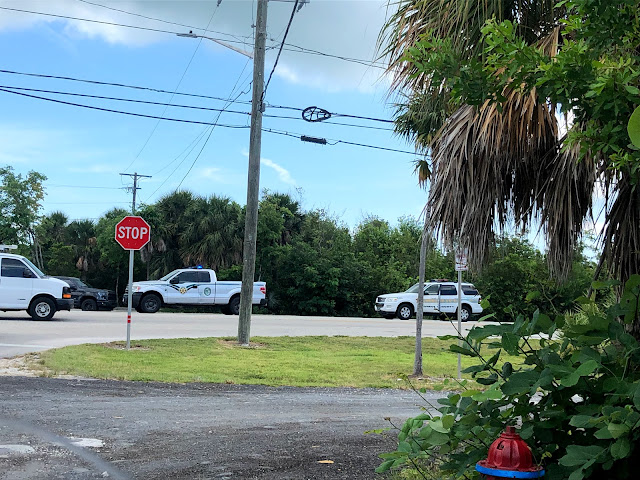 I remember most of what happened that afternoon as I hit the front wheel of the car I saw a kaleidoscope of  colors, the white paint of the car, the front wheel that the front of my scooter struck, being launched into the air and finding myself on my back unable to move. I thought I remembered what came next but after yelling at one guy to call my wife and another to call 911 I didn't remember this woman taking my hand, and even though I spoke to her I was already floating away. 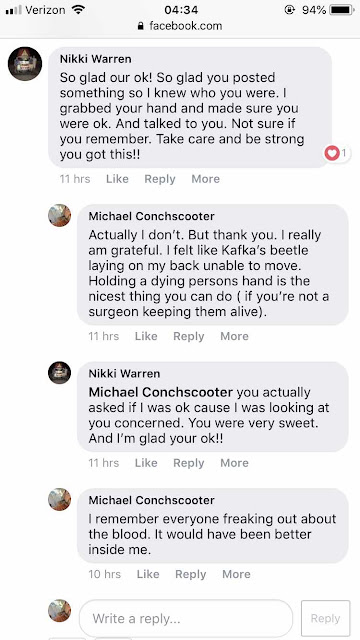 I wondered what happened at the scene of this wreck, and later when my wife and I took Rusty for a walk up Cutthroat she asked me if crossing the intersection freaked me out as it did her. I told her it doesn't really, which I suppose is odd but what does freak me out is the possibility of cars anywhere along Highway One pulling out of side streets without seeing me on my scooter. I have always been alert to that possibility but these days I am hyper vigilant and always try to make eye contact with cars pulling out. 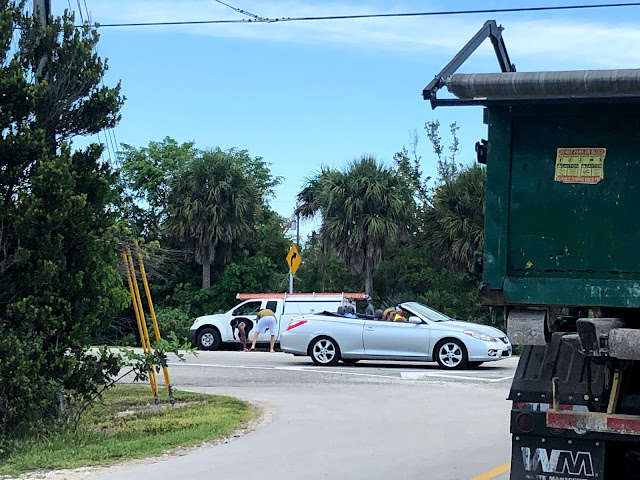 It's been a bad couple of week for accidents on the Overseas Highway. One dark night a pedestrian was killed trying to cross the highway in Big Coppitt at Mile Marker 9. There were a couple of serious accidents in the Upper Keys and  a ghastly pile up near Baby's Coffee. I saw several people comment on the four car crash on Facebook and apparently the cause of the crash, reported to be intoxicated, had been making a spectacle of himself passing recklessly while driving southbound toward Key West. 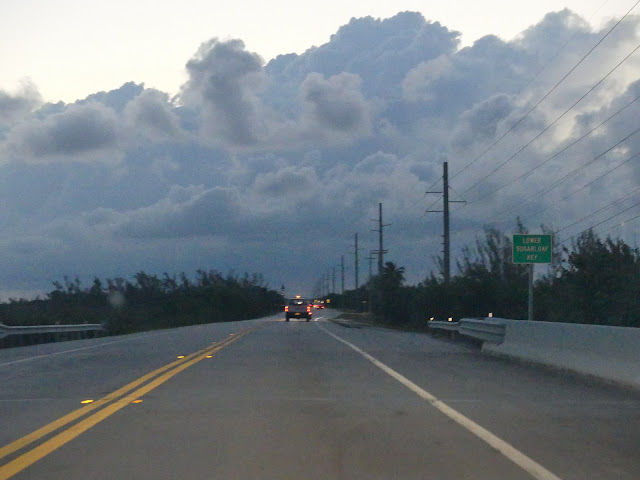 They ended up flying one of the occupants of the cars to a Miami trauma  center but several other people in the cars were also hurt. What made that accident reverberate in my mind was the news my wife passed on to me. This weekend she had met the Sheriff's Deputy who was first on the scene of my accident and in chatting with him, updating him on my recovery, he told her his family members were caught up in that wreck. I remember him at the scene of my accident; all I could see was his highly polished boot and the knife edge crease on his pants as he sorted out the accident scene around my prone form and made sure traffic avoided my wrecked body and the wrecked vehicles. He came to see me last winter and we talked for a while, when he told me that at the time he was actually going home off duty when he came upon the carnage in the highway. And now he ruefully told my wife on Sunday he has his relatives in the hospital with broken bones and the injustice of it makes me crazy. No one is safe, no one is immune, no one gets a free  pass. We are outnumbered by the drunks, the distracted, the incompetent, the under insured, the whole panoply of drivers who suck at driving and use us as their pin balls. Last year it was me, last week it was his people and yesterday it was some other poor unfortunate caught up in a shambles not of their making. Not everything happens for a reason, most of it is just bad luck. 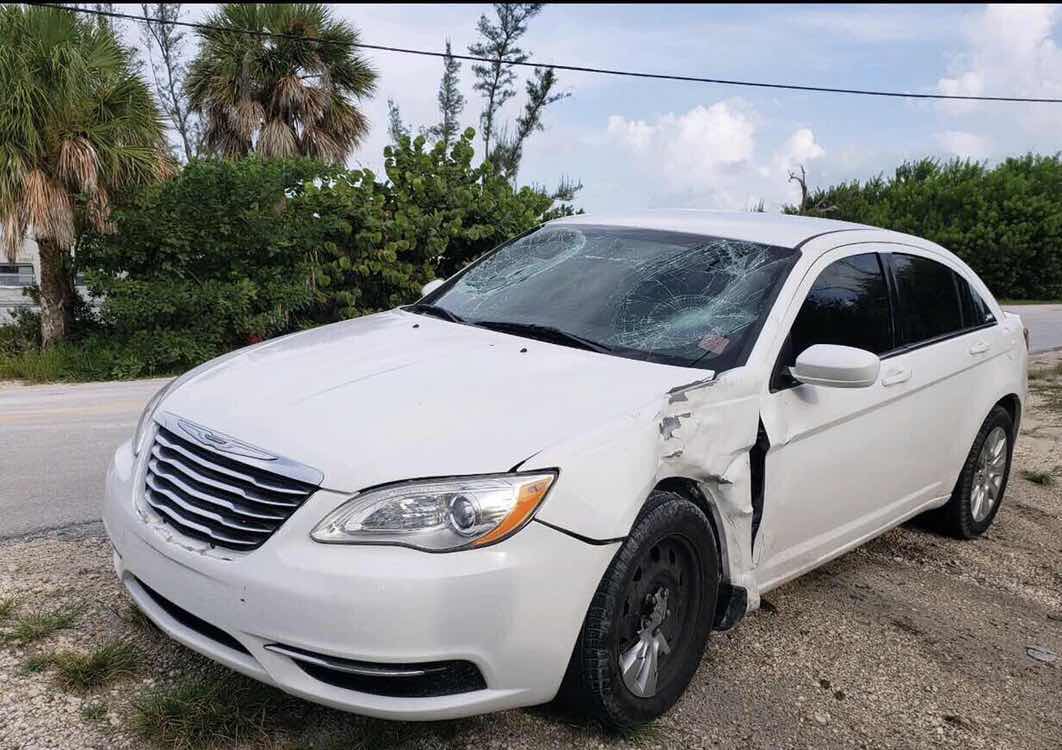