Hell Is Not Kentucky

The rest area in Ohio somewhere near a place called Lima (pronunciation unknown) marked the start fo the return journey, under gray threatening clouds which were a gift from the Gods. We needed reminding  the weather we had had was perfect and could not be expected all the time at these latitudes. 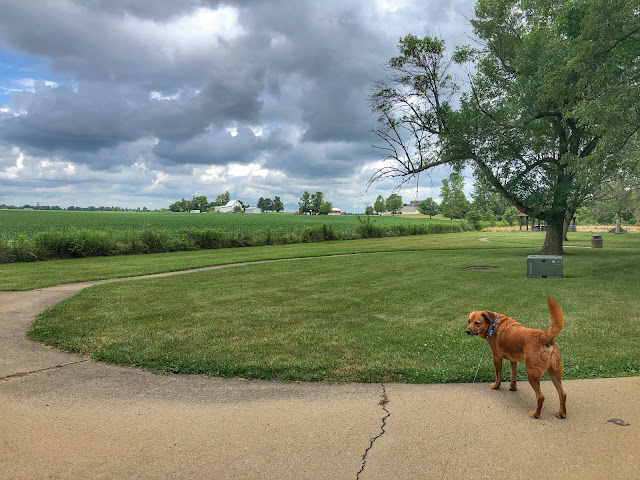 And yet standing there on the edge of the rest area we could look across the fields at the typical mid western scene of barns and crops and silos and so forth.  I know the flatlands are supposed to be boring but I find they have their own beauty and raise their own questions about farming and living so far from the world with which I am most familiar. 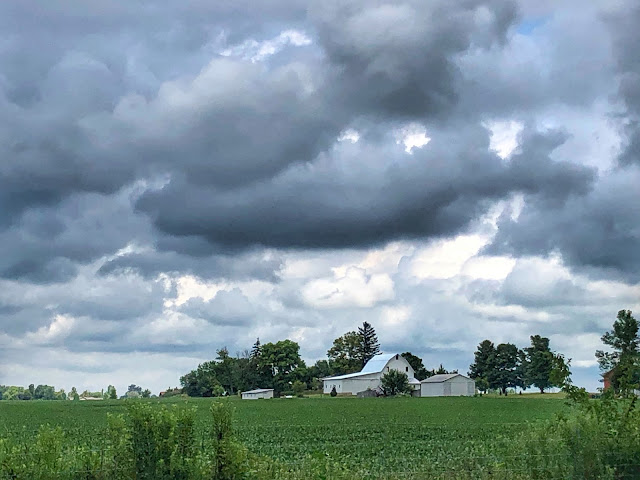 I found when I was out sailing on an apparently featureless flat body of water I could spend hours sitting on the edge of the cockpit watching the water flow by in some form of meditation that left me wondering where the day had gone. In driving the van on cruise control in the slow lane I get the same feeling of a meditative unraveling as the machine drives itself and frees me to think of everything and nothing. 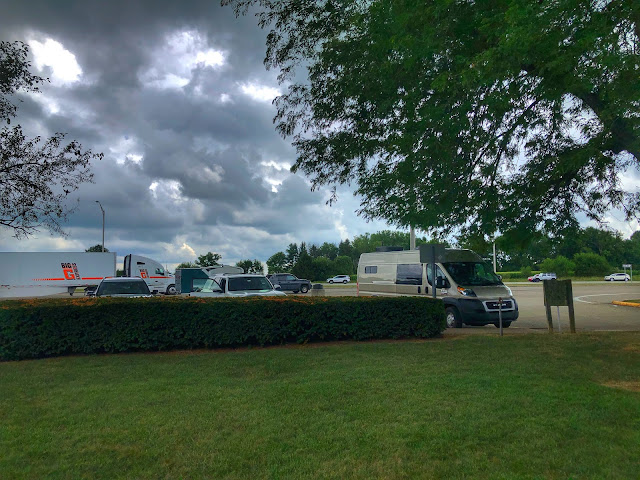 I saw the billboard below preceded by one that asked if I were to die now would I go to heaven or hell for eternity, which question seems rather absurd to me as no one alive knows the answer. If hell were real there would be no need to make the statement by the side of the road. I saw no signs advising me rain is real or hangovers are real or pain is real.  We know and accept them all without question. I have no time for threats or bullying or implications that the maker of all this abundance is a being filled with thoughts of revenge for our minor human failings. If I am overly confident on this subject the authors of the billboards will get their opportunity to rejoice at my pig headed misfortune. But for now we drive. 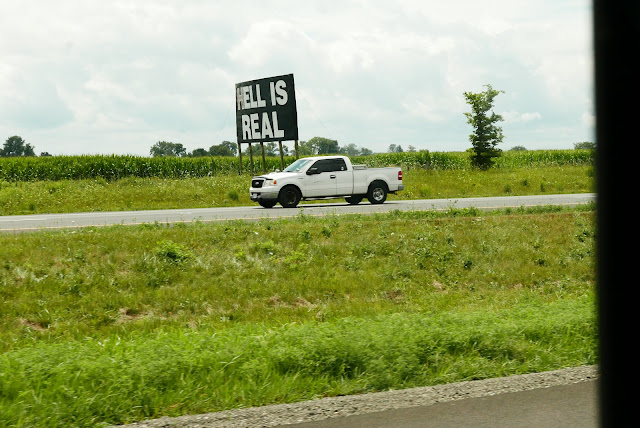 The road ahead, I-75 promising an arrival in Tampa in 1100 miles looked rather threatening but I was in my box on four wheels with climate control and windshield wipers. 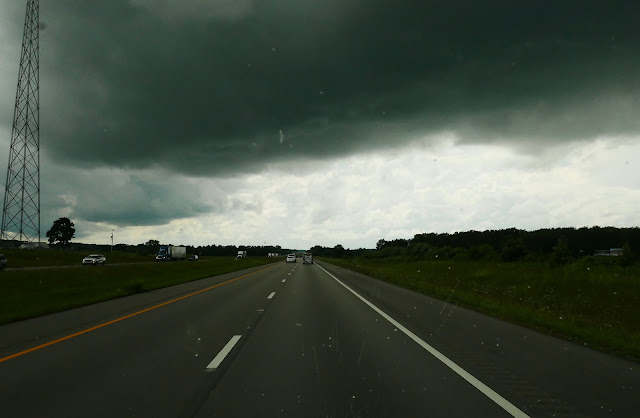 The good thing about riding I-71 into Kentucky's "unbridled spirit" was that pretty soon we would be off on the back roads. 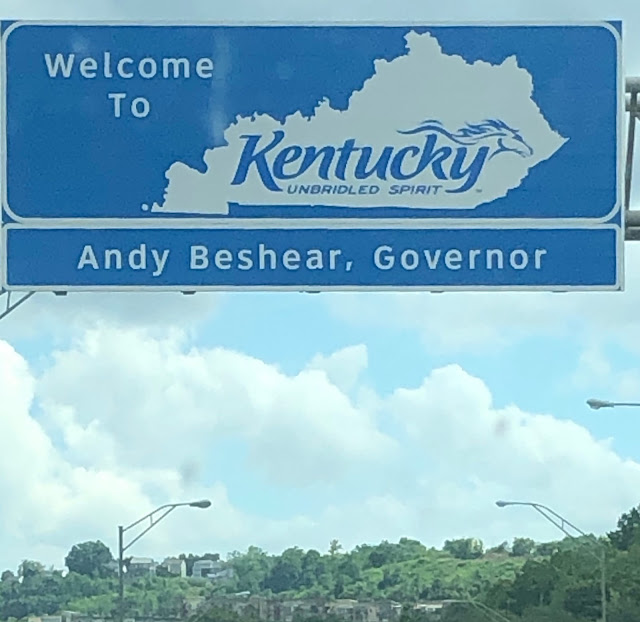 It was a winding narrow berm of a road with sharp drop offs on either side and it wound up and over and around like a double jointed snake. I kept pulling over to let the fearless locals by and, I swear this is true, they kept stopping to ask f I was okay. White knuckled yes, but okay? Sort of. We drove through small villages with lots of churches and dead cars but not many tow trucks. I wondered how long it would take to pull the Golden Van out of the very deep very sheer ditches close on either side of the narrow ribbon of asphalt we were following. 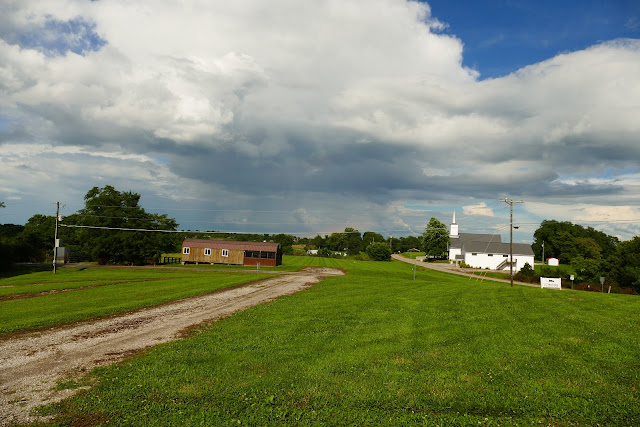 When we arrived at the farm imagine my astonishment at seeing two other recreational vehicles both towing cars and Botha great deal larger than Gannet 2. They must have nerves of steel we whispered lest we draw attention to our modest presence in the field. We did manage to find a small mud hole and it took. moment to drive out of that with minimal wheel spin and soon the owner in an all terrain vehicle came alongside and told us where to park as we were not the sharpest knives in the RV. 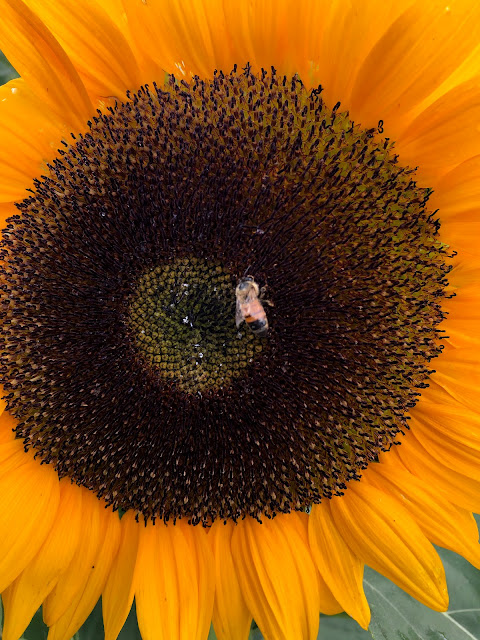 It was it's own world, Steepleview Farm, suspended between a green and abundant heaven below and paradoxically a gray and thunderous hell above. The afternoon was a mixture of sun and rain, huddling inside and quick walks outside with an umbrella and keen dog. Rusty was heedless when it came to getting wet and he ran through the grass as though born to such activity, which in a sense he was. I followed holding an absurdly bright umbrella picking my way through rain squalls. 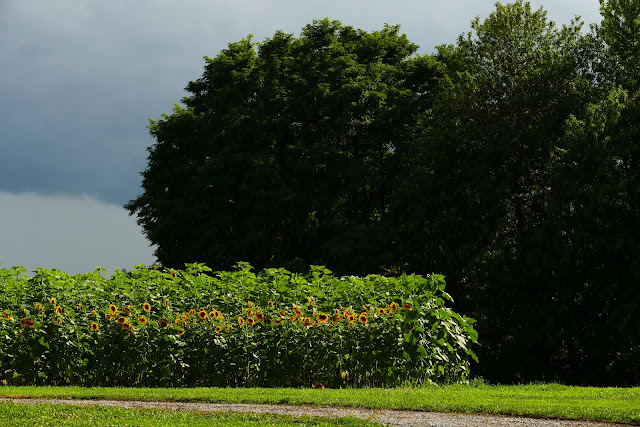 Apparently stuff grows in the soil around there as each plot of vegetables was surrounded by a great deal of finely mowed grass. 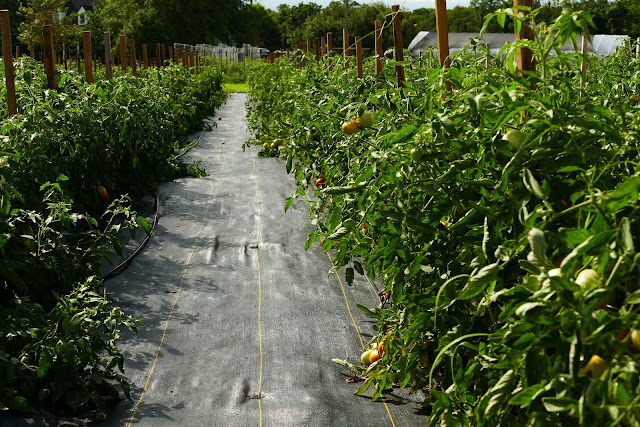 Water melons, raspberries, peppers, onions and even sunflowers all grew in endless plots. We sent the night for free and bought twenty bucks worth of vegetables in the morning. Harvest Host at work again. 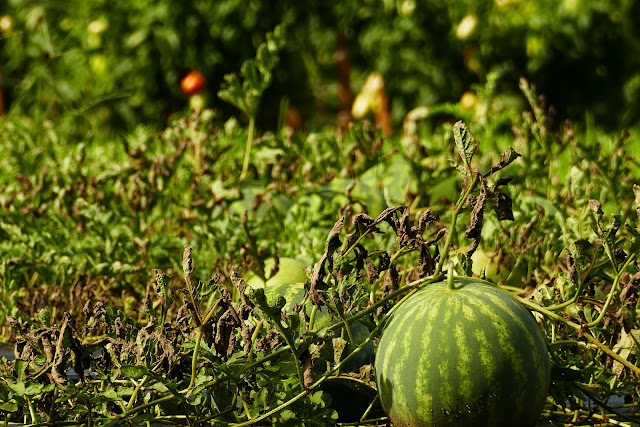 It has always seemed slightly unlikely to me that anything I put in the ground might grow up to be big and real and multicolored as others manage to accomplish. Yet given minimal encouragement  it seems we all have the drive within us to sprout.  I had no idea where to point my lens as everything was pushing up into the light. We walked across the field and found the path to a promising sign that read "Produce" which was where we planned to stop in the morning on our way out. Rusty went back to being a proper civilized house pet as we approached the farmhouse and he is luckily very easy about playing the role of canis familiaris as needed. When not needed he does the Carolina Pariah Dog of the wild very well too. 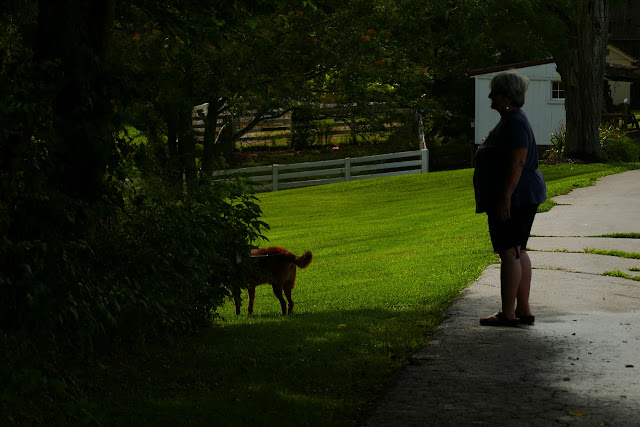 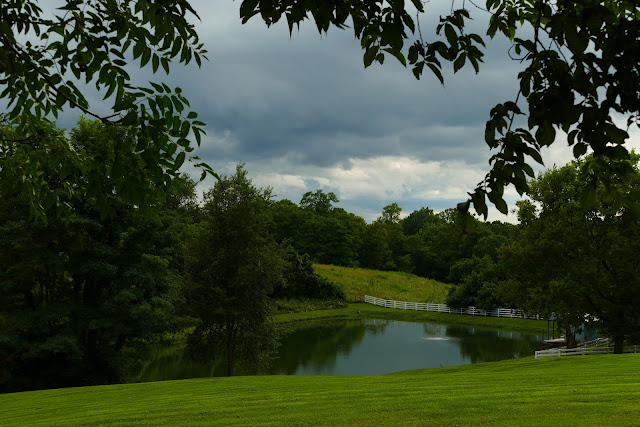 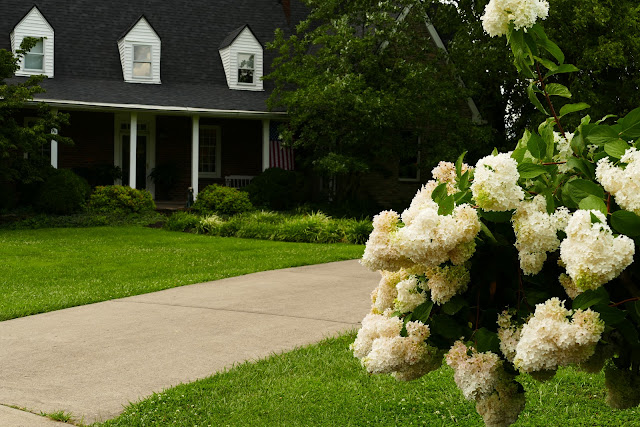 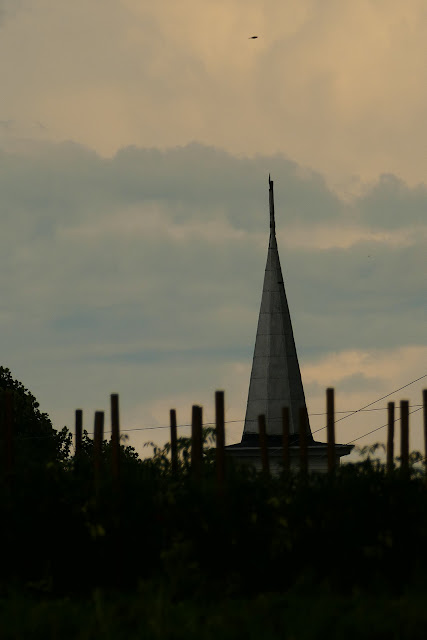 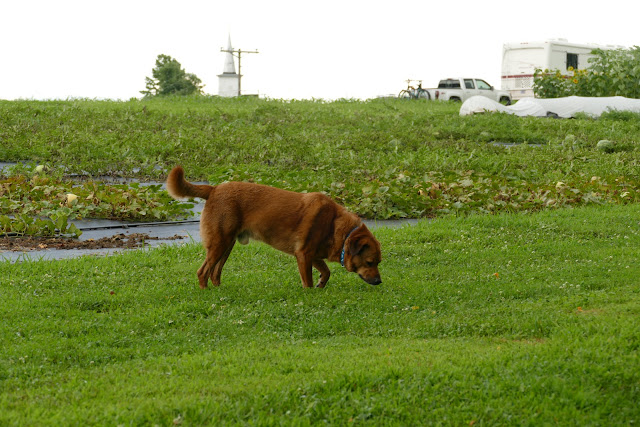 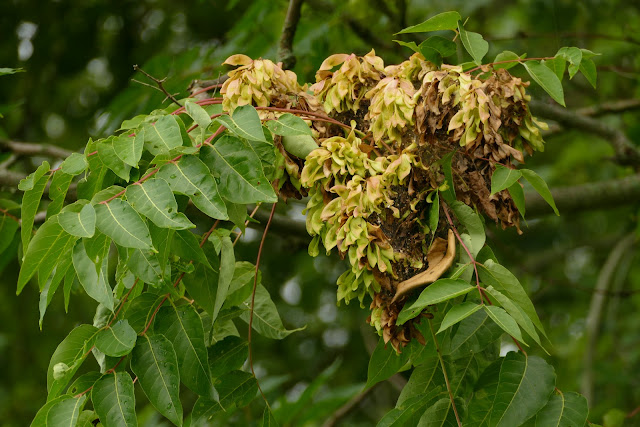 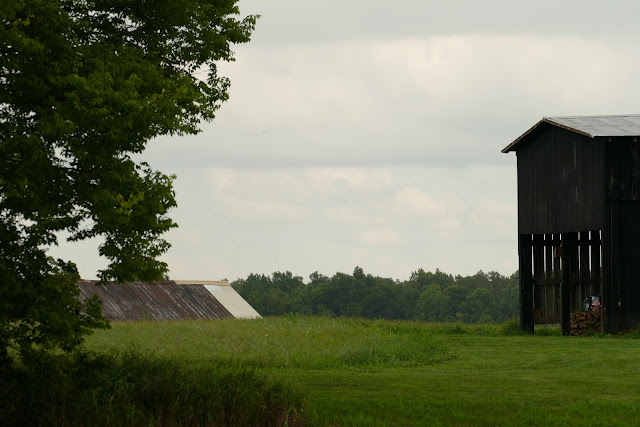 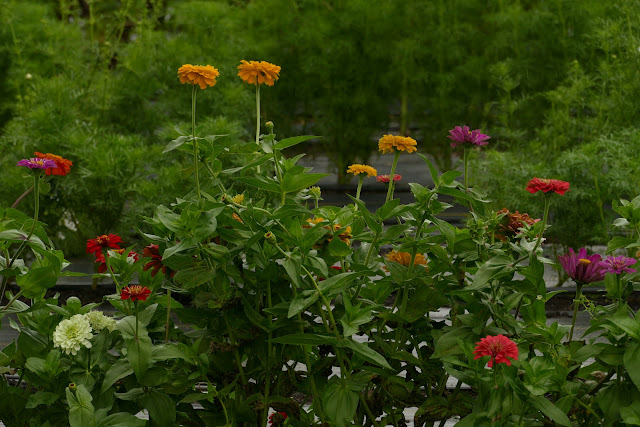 We got back to the house on wheels as the rain started back down. Rusty got on the bed and looked at the raindrops sliding down the back windows. 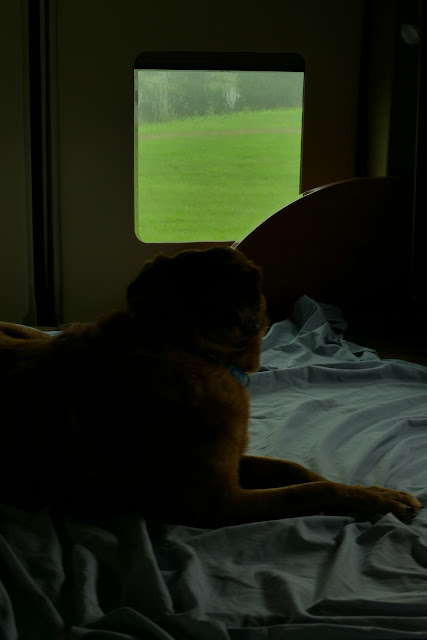 The view out the side window wasn't terribly encouraging but we were warm inside the van and oddly enough have needed no more than light blanket to sleep even on the coldest of nights on the road, in the low 50s. 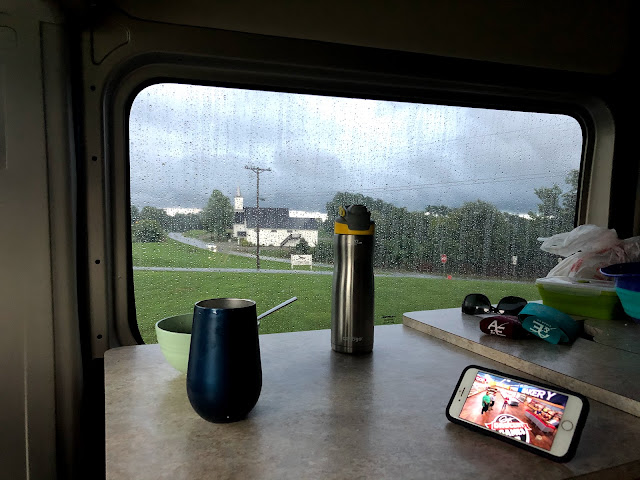 After the rain slowed down a bit I got the incandescent umbrella out and took it and Rusty for one last stroll in these open fields. 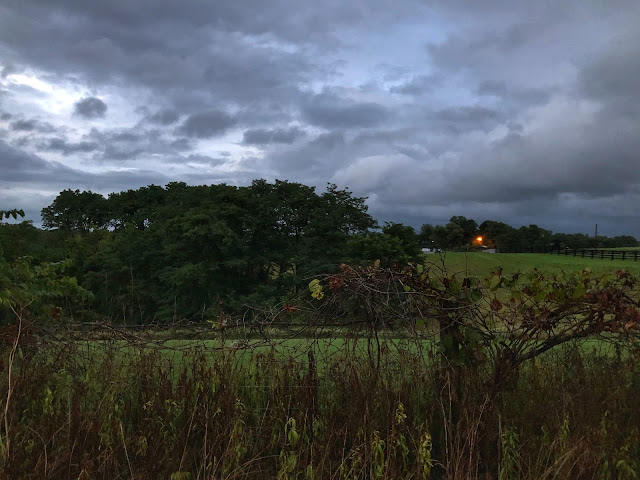 It really is a bright umbrella. 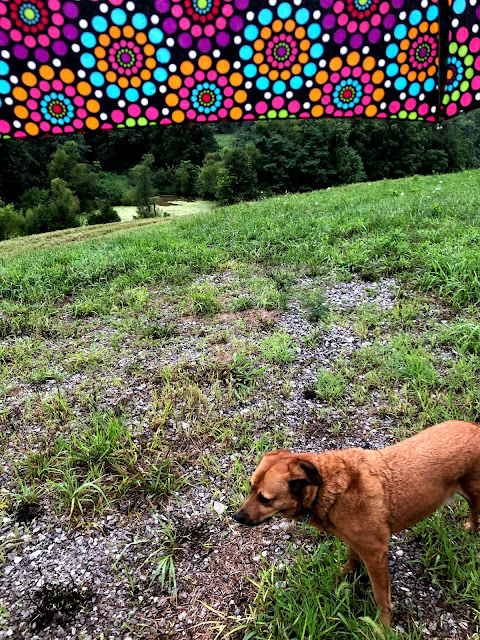 We ate mushroom and beef filled tortellini which we bought in Columbus earlier in the day at the North Market and there happened to be a bottle or red lurking somewhere deep in the stores so the rain was free to do its worst outside, which it did, a long night of drizzle and downpours. 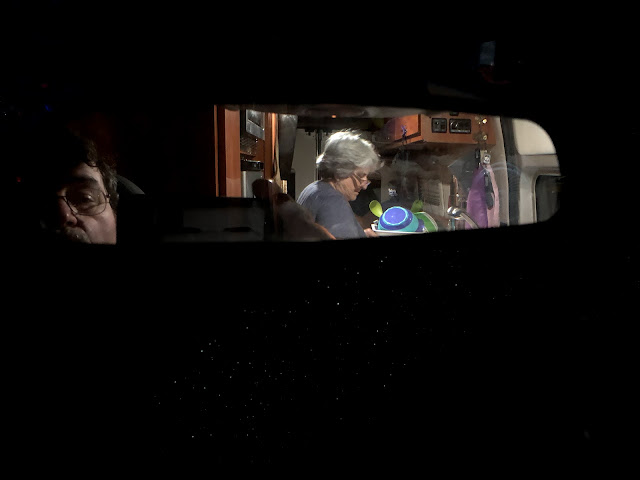 I still don't know how those very nice charming people got their large RVs and their towed cars down those backroads. I was extra grateful for a mere 21 foot van that night. 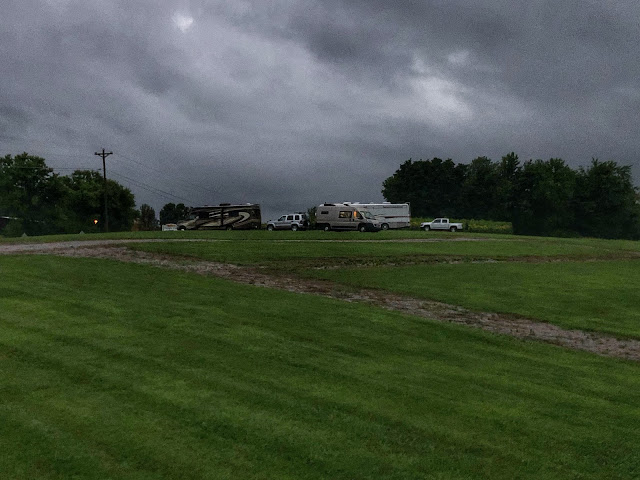 Posted by Conchscooter at 1:00 AM 3 comments: