My biggest disappointment about the new display about the playwright's life in Key West was that I didn't allow nearly enough time to explore it properly. My phone pinged announcing my lunch appointment was on the way and I had to beat a retreat. This exhibition is free (they take donations of course) and it's at the Key West Business Guild at 513 Truman, so unless you are riding a Vespa, ahem, parking is non existent. 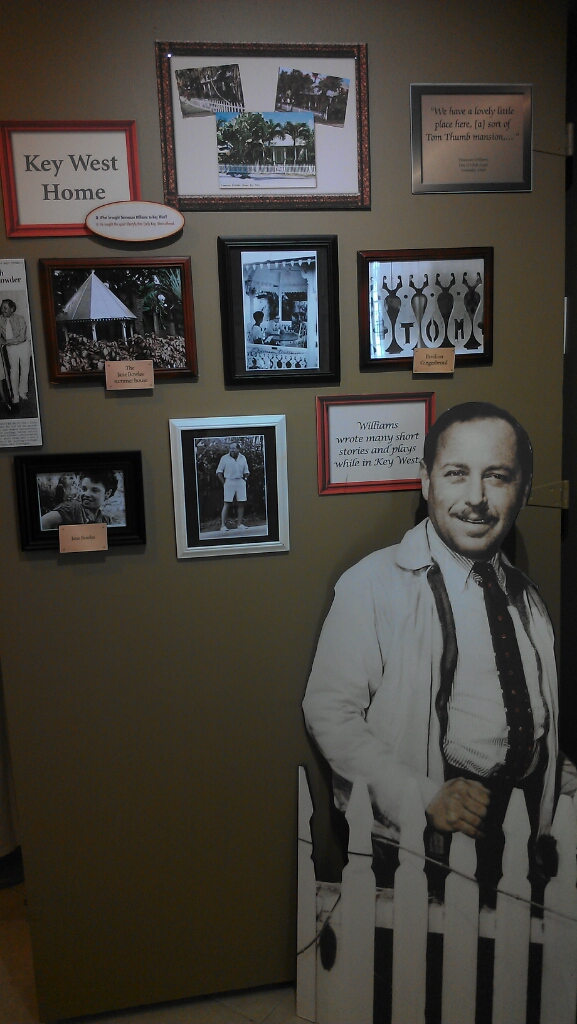 The displays are well presented, full of information with pictures and include a video that I wanted to sit down and watch. Gore Vidal is interviewed, I saw him and wanted to listen but I was on my way out the door. Grr! 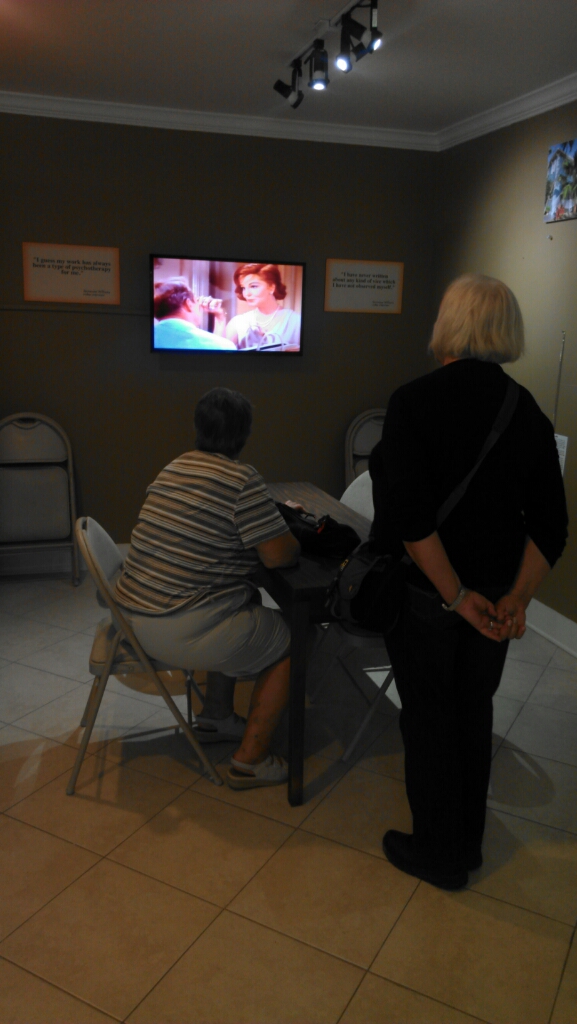 The location may come as a surprise considering the numbers of arenas that hold these kinds of events around Key West but it's not the first time they have shown something worth seeing. I've heard the Guild described as Key West's "Gay Chamber of Commerce" which as far as I know fits the bill, but they are also a resource center for visitors looking for gay Key West. I'm not gay and I don't run a business here so my encounters with the Guild are limited to this sort of visit. 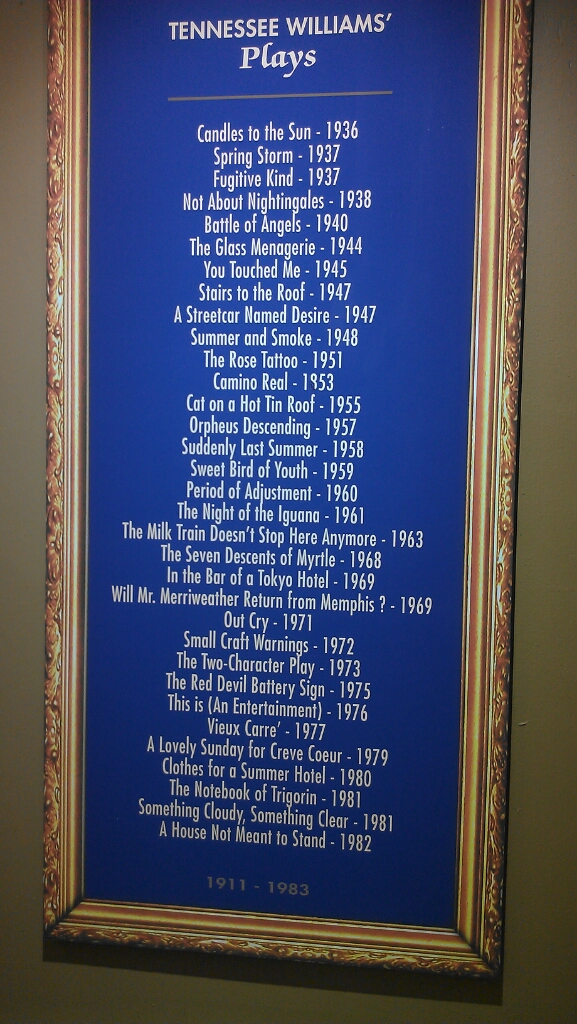 Thomas Lanier Williams III was born in Mississippi March 26th 1911, which explains why this month was chosen for this exhibition. He was gay which explains the location and he loved Key West which over the course of time has become a mutual attraction. Tennessee Williams' life in Key West epitomizes what we all tend to seek here at the end of the road, freedom from judgement, time to be yourself, and purpose expressed through art. He had a little house, he had a swimming pool and he had love and friendship. Pretty cool, huh? 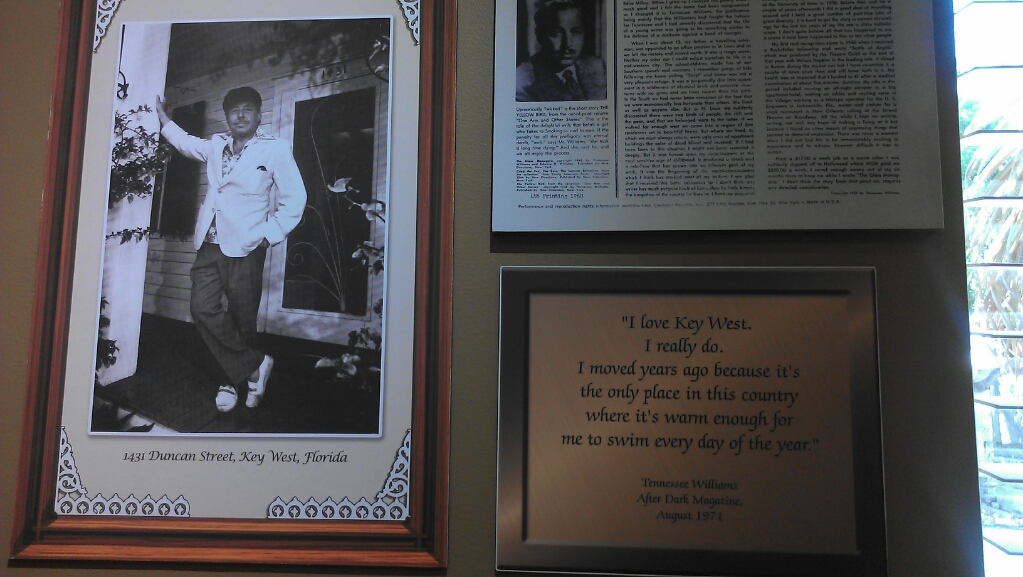 The thing is, Tennessee Williams just wasn't as cool as Ernest Hemingway and I wonder about that. Hemingway was an alcoholic essentially, a womanizer, he killed large animals for fun and he wrote in a style I find difficult to digest. I've heard it suggested that Key West loves Hemingway because he was a manly man. Tennessee Williams not to put too fine a point on it was a poof. 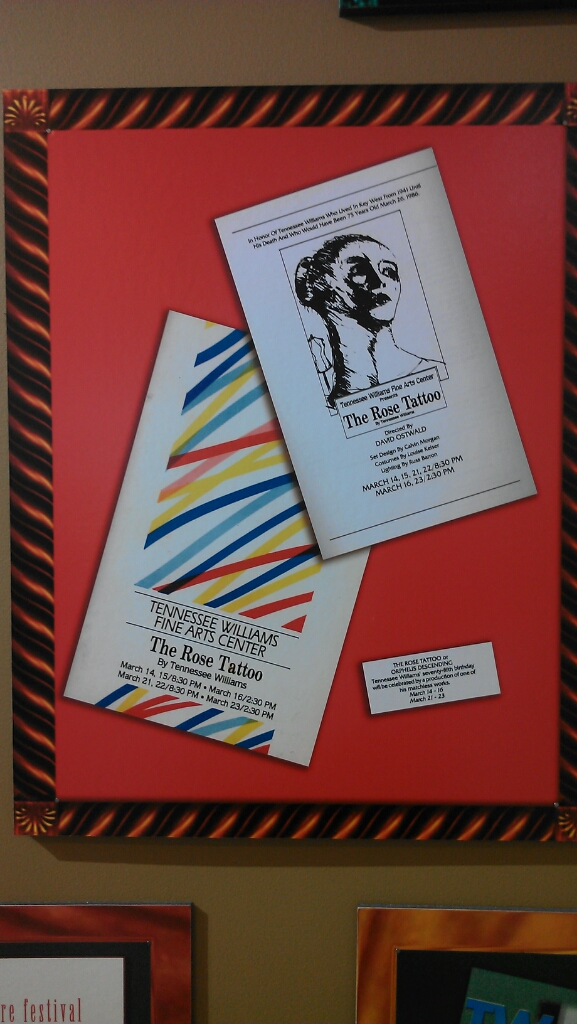 His plays, which only received acclaim after a decade of obscurity and struggle, deal with profound issues, deeply adult stories about the sort of family he grew up in, messed up and unbearable. Considering Mississippi today, one has to wonder what a young gay man would have suffered there 80 years ago. Key West was paradise indeed. 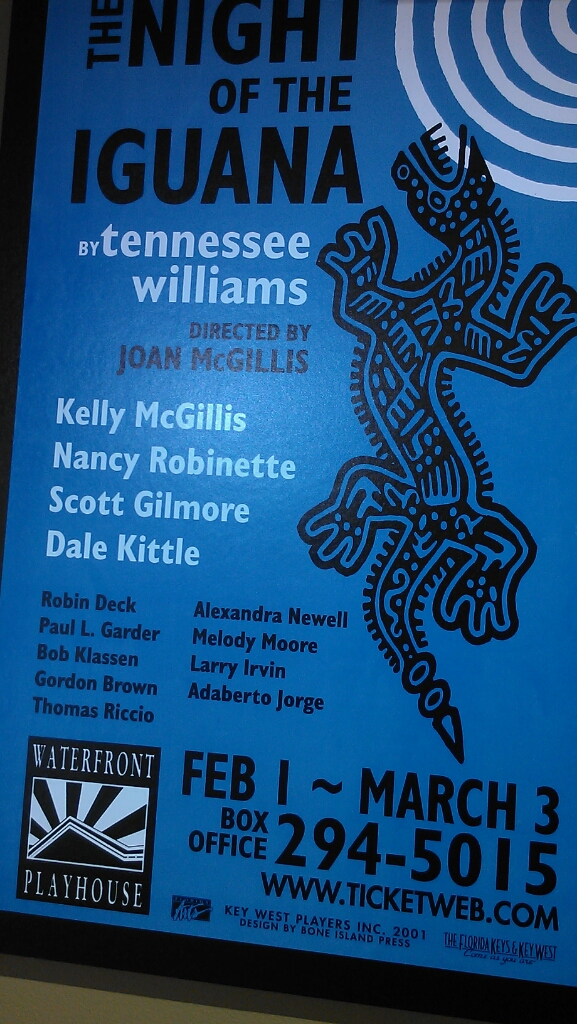 This man suffered for his art and put his suffering down on stage for all to see. I find his story compelling for he wrote as an outsider, without bluster. He also fell deeply in love, a man he lost to cancer, a loss that seemed to derail him. 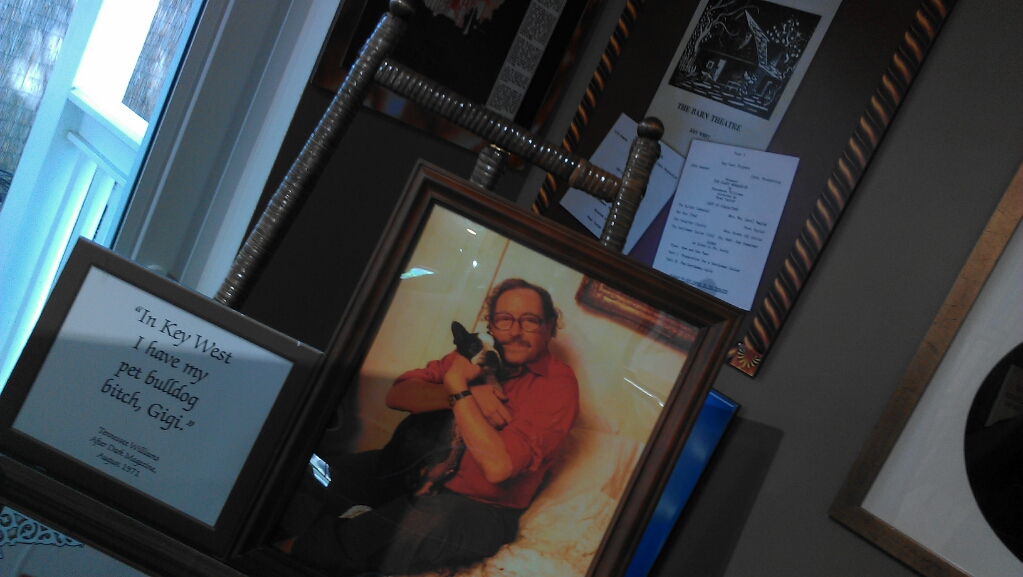 Through all those years the honors piled up and they are listed and displayed here. There is a ton of stuff to read, to absorb. Key West was of course too small a cockpit for his over sized drama to play out on, so as it happens of course his connection to Key West waxed and waned. 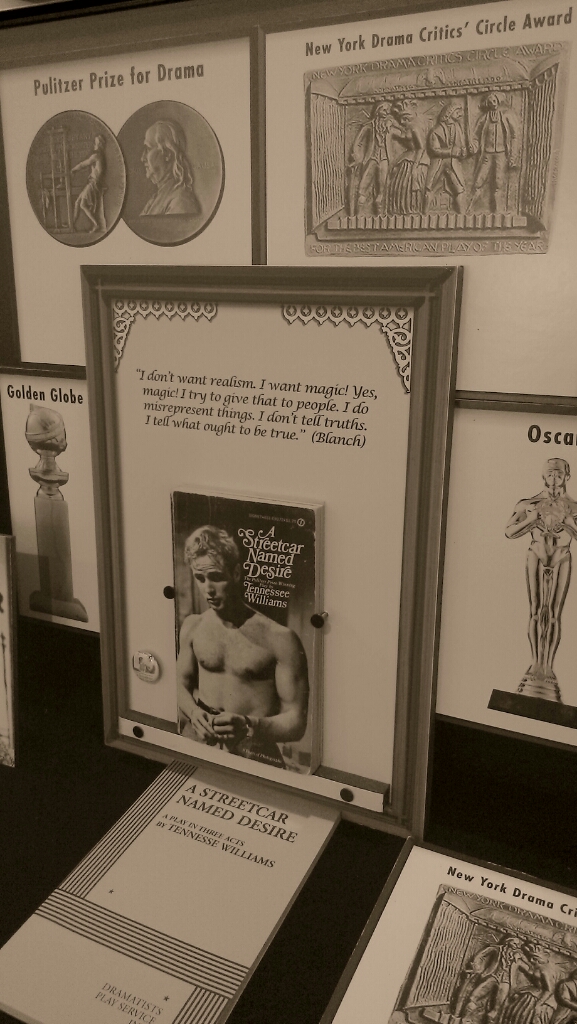 But its clear from these pictures he was happy here, he smiles a lot. A while back I went to Oxford Mississippi to see Rowan Oak and I made the mistake of contrasting and comparing William Faulkner to Ernest Hemingway, the two big names of the two small towns. I should have compared the two men from Mississippi, it would have been more interesting. Faulkner ended a nascent friendship with Hemingway by suggesting he did not put much of himself into his writings and therefore he lacked bravery. Which could never be said of Williams who wrote repeatedly about all the worst aspects of his family. Williams was brave all right. 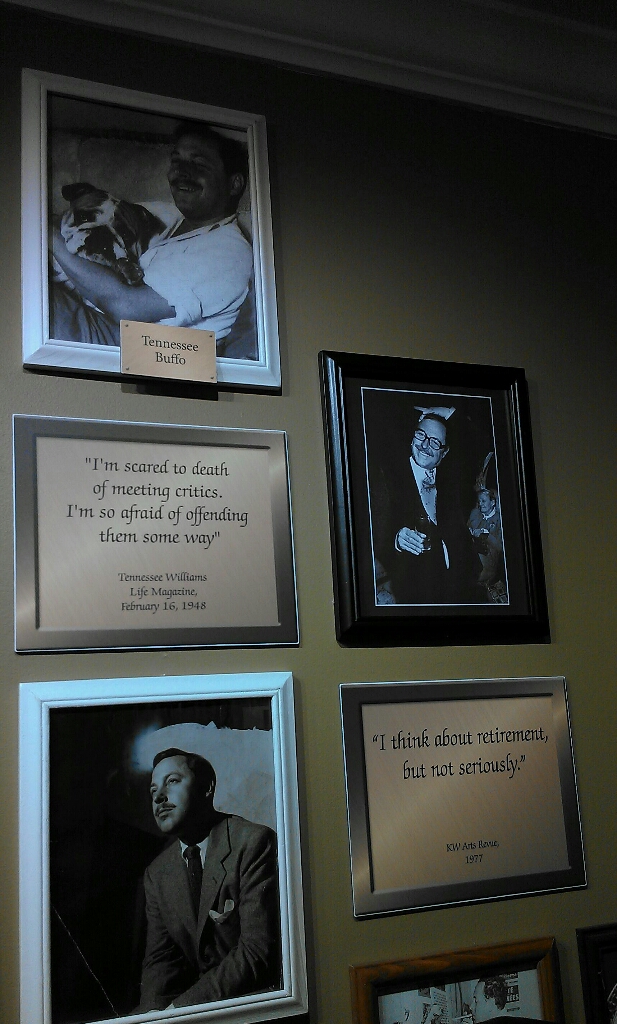 Faulkner, seen from the outside was a dour man, and there is only one picture of him half smiling, check the link above, while here Tennessee Williams was always smiling. Maybe just for the camera maybe just because he wanted to. Reading the clippings he got into small town life, making contributions with money and time, posing for pictures and so forth. Faulkner hid in his forest with his horses. I'd be more like that, but I'd like to have the nerve to be more like the Tennessee Williams of his Key West years. 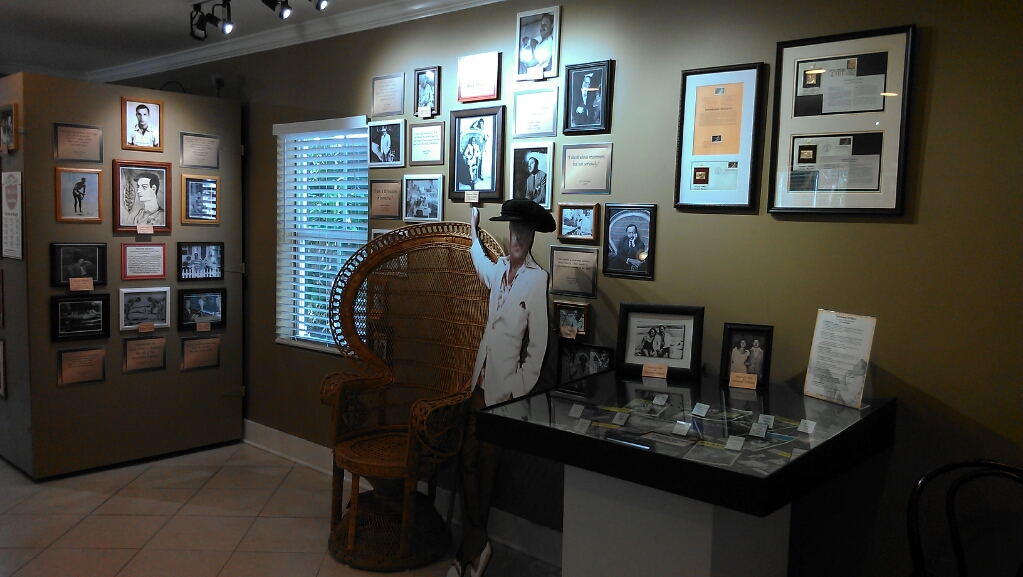 Williams painted, and I'm no art critic but I am kind of glad he kept his day job, far be it from me to criticize anything about the man. Others did that for me, especially in his later years. He dealt with depression with amphetamines and took sleeping draughts to sleep, and things gradually got worse. His death is shrouded in mystery generally attributed to choking but some say it was some kind of accidental drug overdose. Either way it wasn't a death most of us would seek out, alone in a New York apartment. 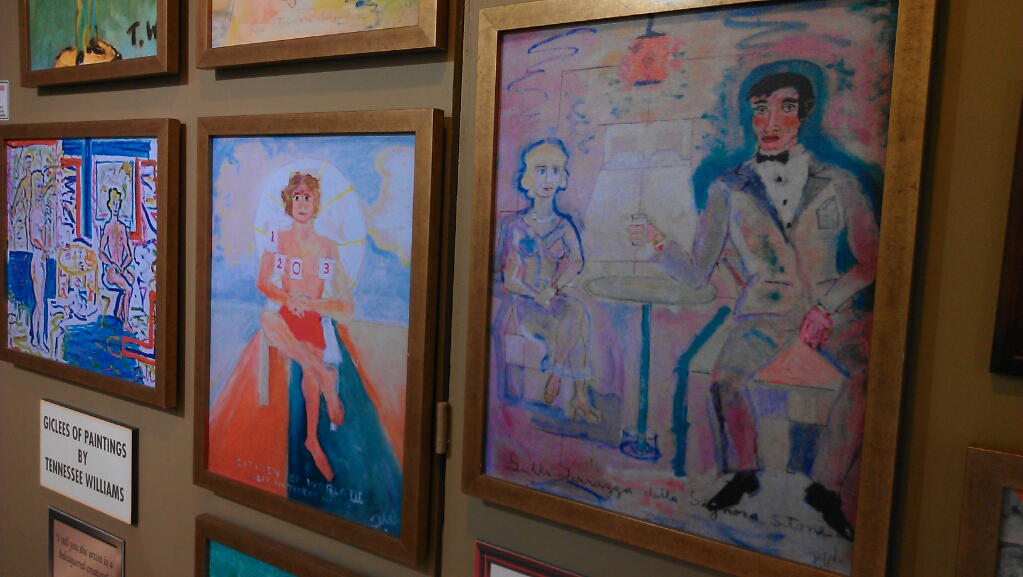 Unfortunately for Tennessee Williams the love of his life Frank Merlo, a strapping Italian American ( his last name means "blackbird") died of cancer in 1963 and apparently the playwright lost the man who had been his anchor for the best years if his life. I didn't get to see what they might have about the end of his life and I plan to go back and fill in the missing parts that I did not have time to read. I have read about those last years elsewhere and they weren't good, his talent in decline, recognition evaporating and his health held hostage to his medications.. 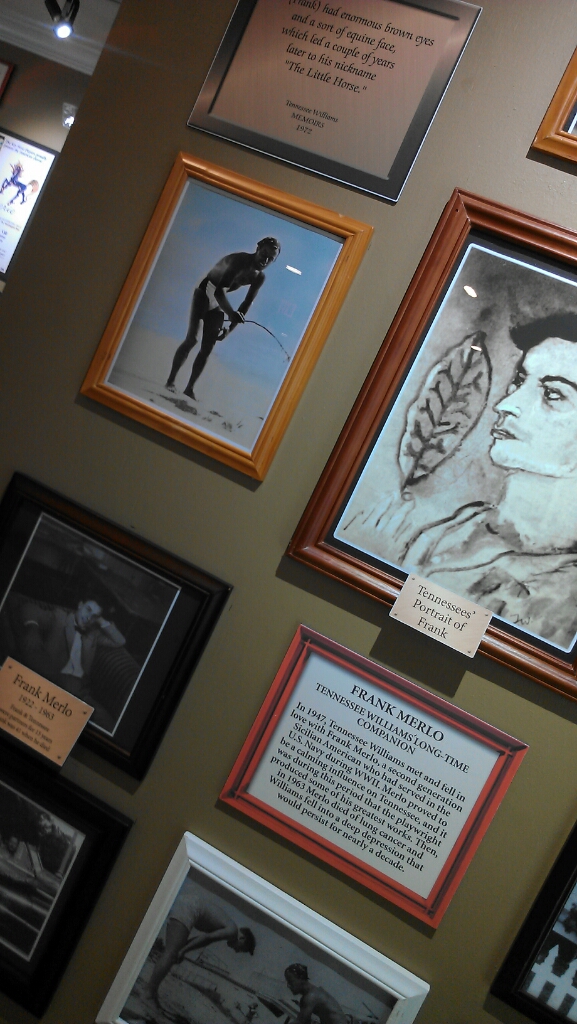 He died in New York in 1983 and personally I think he'd have done a lot better to live out his years on Duncan Street in Key West. That he was happy here says a lot. This exhibit does that justice.
Folks: one week ago I mentioned the podcasts I have been recording for a producer in New York. The launch was awkward, with Apple delaying their appearance on iTunes for a few days. They have been available for the past week and we have five interviews up now at www.travelandsafety.com/iTunes which page should get you here: 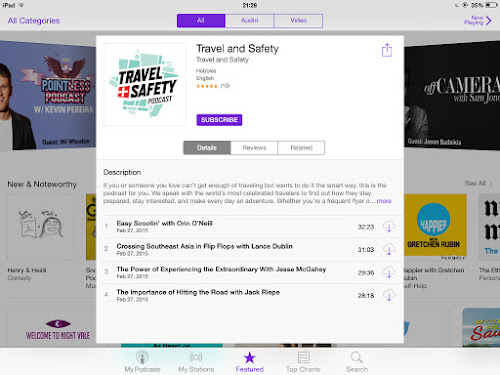 Click the "reviews" box in the middle of the page which will get you here: 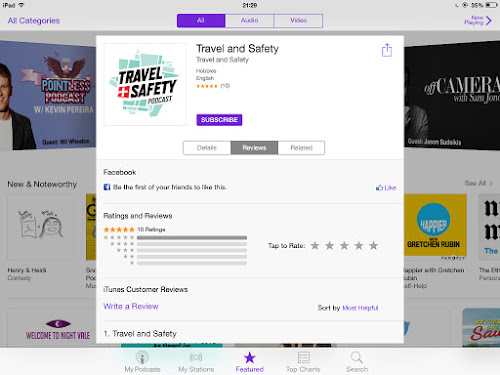 And then give it a fine star rating and earn my great thanks. Much appreciated and sorry for the confusion. The engineer has been flogged and deprived of sleep.