The Hole In The Wall Gang

Bandits have taken over Key West. He was a blur in the distance but his fishing gear following along behind reassured me. 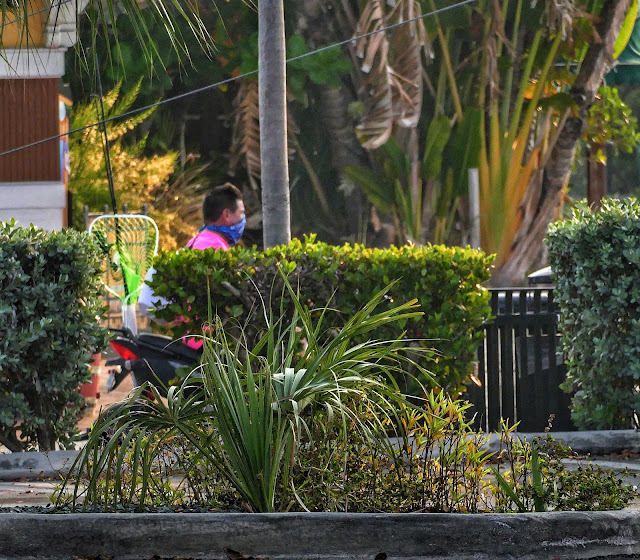 I am sure you like me, have seen the pictures of mass graves in New York, anonymous pine coffins half covered in dirt, lined up like 19th century plague victims. You've heard the stories from big cities across the US which now enjoys the distinction of more coronavirus deaths than any other lucky country. And yet in the Florida Keys the numbers remain low, hospitals are coping and most people are paying attention to their social distancing. 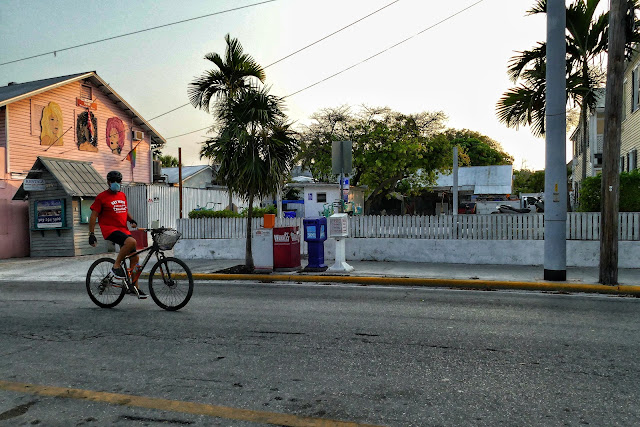 There is hardly any testing and our public health system is run, as it were, by a lawyer who is about as visible as any ghostly presence might take in a leadership role. And yet the Keys are coping under the redoubtable leadership of the Sheriff of all people. Law enforcement has taken the lead in this health care crisis and the Sheriff has overridden the State even though they told him to take down the checkpoints on the two entry points to the islands. One person has been arrested and to my astonishment they say thousands have been turned back. Thousands of people still think it's a good time for a Keys vacation? 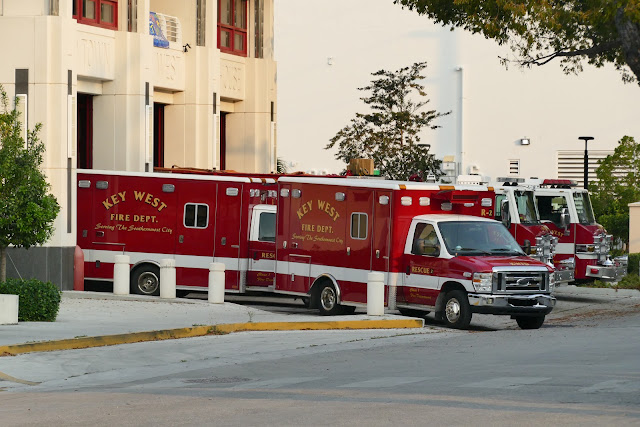 I was always a big fan of the fire department taking over the ambulance service when the private company lost the contract. Since then the business of collecting money from a population largely uninsured has been problematic but the service has been pretty damned good. Combined with the Sheriff's expanded public helicopter service if you can't get it in the Keys, Miami is not far away and Miami has  first class healthcare, as I found out rather painfully.  The ambulance service in Key West has doubled up with spare ambulances, lots of cleaning and sterilizing and protective gear. They are ready to cope and that makes my job of dispatching them a lot less stressful. And yet so far the number of Covid-19 cases reported is easily managed.  I feel like we in the Keys should be feeling very very lucky so far. Or I'd like to think we are well managed. 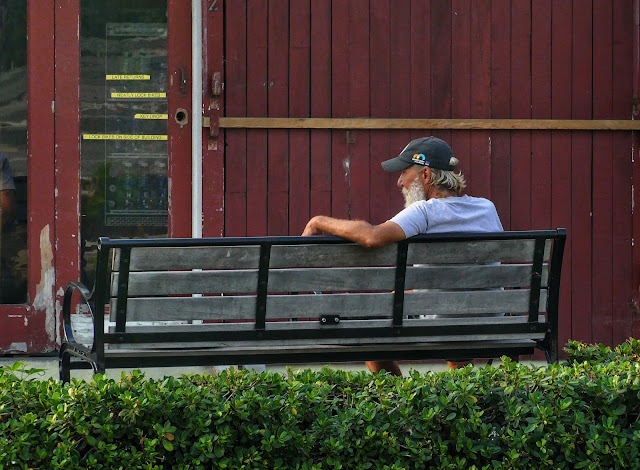 In my early morning walks I find people stand well back, everyone gets the idea that separation is important. At the same time everywhere you go you see evidence of a stationary city, the old curling signs telling people businesses are closed, a community that stopped still when the plague swept through town. 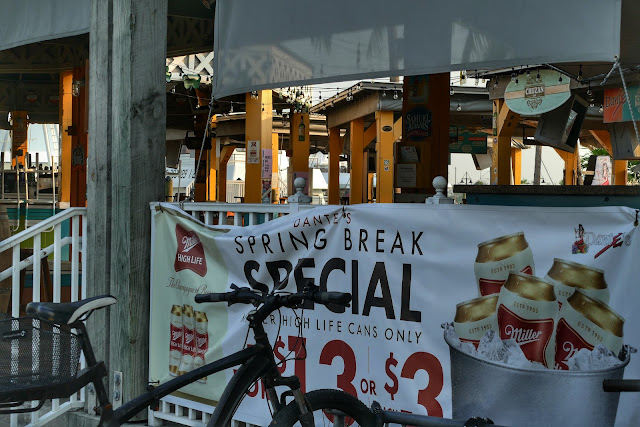 I was asked on Instagram what it's like to be in the Keys during the epidemic. That's a tough one to answer as I'm not typical, I don't hang out in bars but I do miss the choices of visiting places that made me appreciate life in this small town. Take your pick, Key West is yours. For me the live theaters, the Tropic Cinema and the Studios of Key West top my list but its pretty arbitrary. I miss the public toilets in the morning whose absence means I can't drink tea on my drive into town with Rusty. Is that weird? I have a whole circuit of places I can pee in peace when out with my dog and now they are all locked. Bugger. I like my morning Yorkshire Gold and now I have to wait until I get home. First world problem. 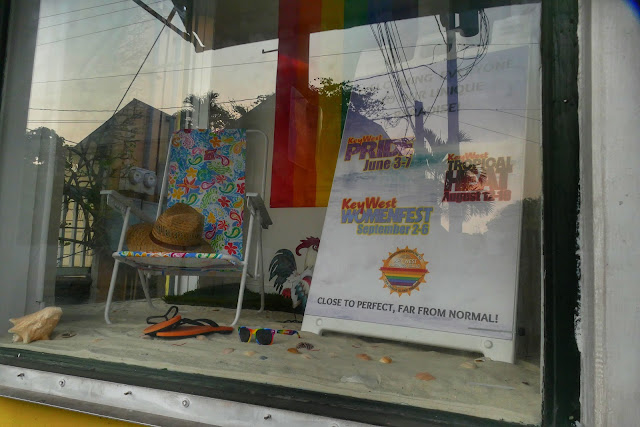 The hopeful sign in the window of the Business Guild on Duval Street...you suppose June will see us "back to normal?' It's inconceivable to me that we could still be here drilling the tourism economy into the ground. I got a call at work from some guy Up North who asked me, a police dispatcher, when the Covid-19 shut down would be over. I just sat there wondering why he needed me to help him to decide to cancel his fishing trip. Dude, I wanted to say, I canceled my Irish vacation at the beginning of March. But there again I'm an adult and I felt no need to call the Irish Gardai to ask their opinion. But we live in an age of learned helplessness I find. 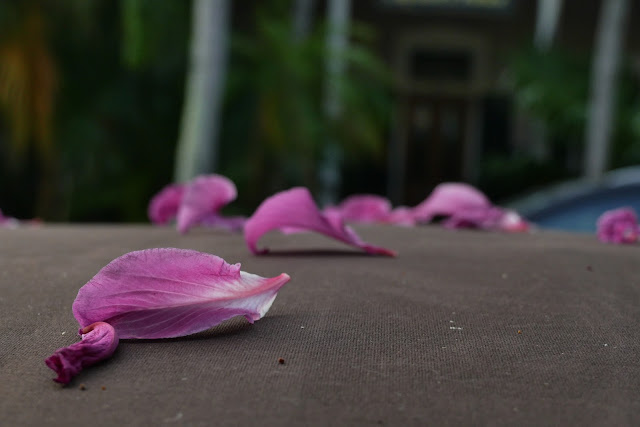 And then there are the members of the community who won't let their standards down. Leaves are falling and accumulating. They make the town look forgotten, and I know it's a temporary thing but that sound of leaves blowing in the wind feels like a ghost town is wrapped around you and your dog. 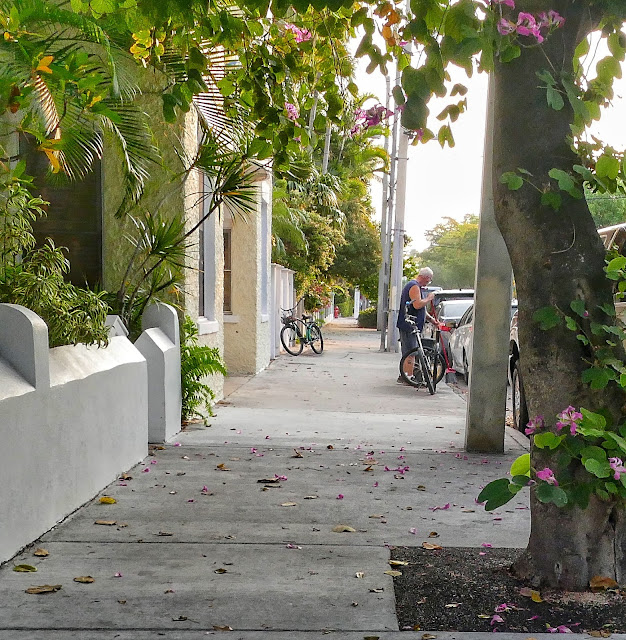 We stepped into the street to avoid him, he barely acknowledged us as he kept on sweeping with determination and precision. I admire such dedication especially as I suck at it. Though in my defense I trimmed the bushes lining my drive and encroaching my mailbox. Doing my ineffectual bit to push back entropy. I can't stand gardening. 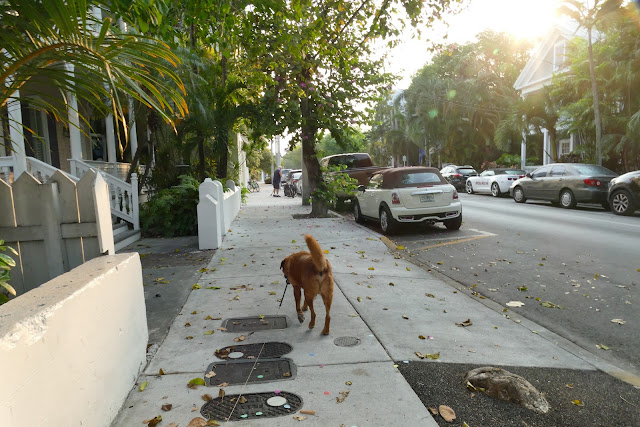 This endless hurricane evacuation is wearing on everyone, the shortage of work and money, the confused and uncertain future, leaders who can offer no advice as they seem to know as little as we do. What a life. And then there are our neighbors who just don't get it. Seen Sunday morning at the White Street Pier, the real bandits gathering in a large clump in a public place. I looked and wondered why they feel the need to do it while the rest of us are trying to stay apart: 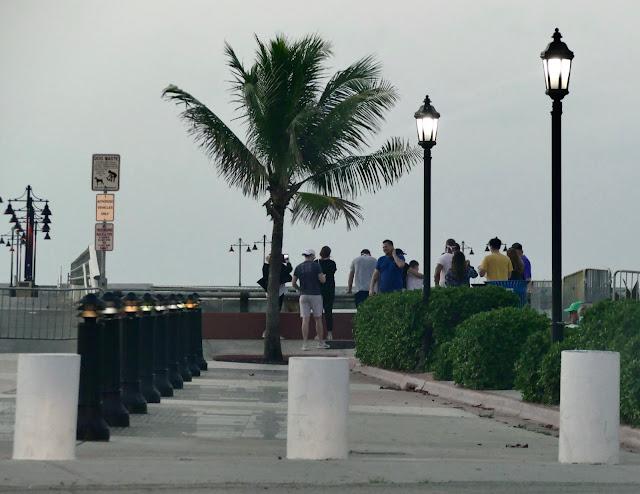 I keep hoping for the best, I keep wanting to believe we are close to peak infection, I trust this virus won't come back before there is an effective vaccine. I know you are doing the same and in the end we can only hope this social distancing stuff works and the imbeciles will get onboard. If they don't this thing could drag on beyond even my capacity to be isolated. Then what? 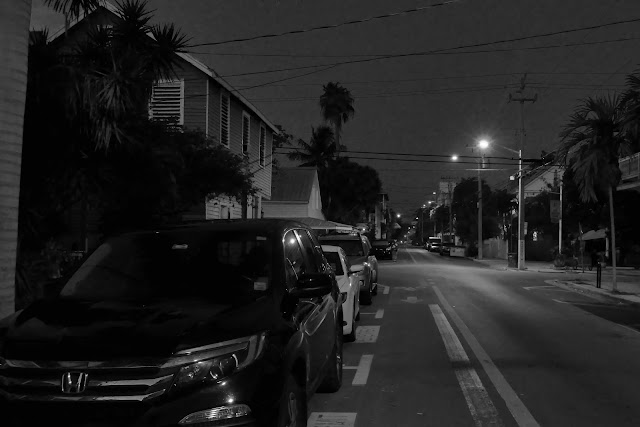