A Walk With Giovanni

It was my second to last evening in Terni, I has food shopping to do, I had bags to pack and weigh, I had decisions to make about which riding clothes to leave behind for my next visit, hopefully next July. All that could wait, we had an evening together to do nothing more serious than talk. 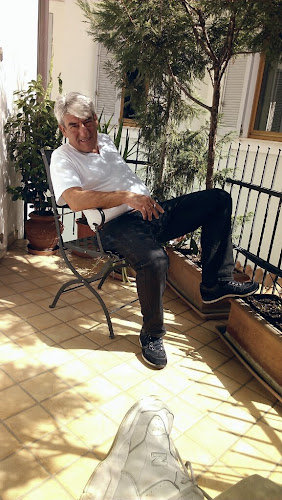 Italians love to talk and I find it draining. With Giovanni its in a good way as we talk about our families, our lives, our common history, the economy, politics and traveling. Giovanni (the cardiologist) isn't allowed to smoke in the house but he has a rather nice balcony cultivated by his wife for the purpose. His home is quite lovely though from the outside it is rather austere compared to the older buildings across the street. I caught this one near sunrise: 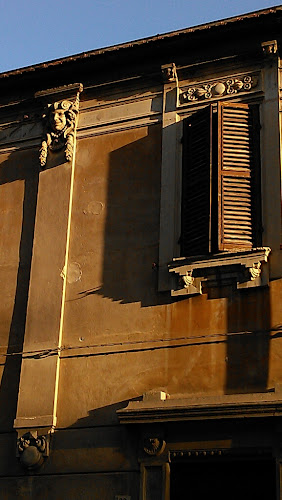 Giovanni's home in the heart of Terni, the second province of Umbria is on the second floor and his kitchen is hidden behind the balcony with the plants. His wife loves to grow things. 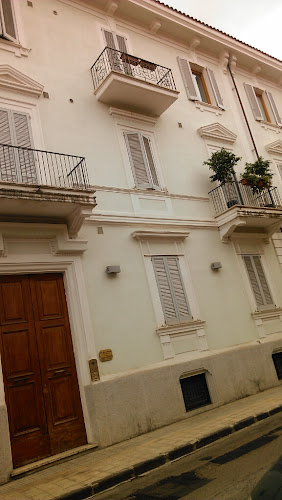 Giovanni has been working as a cardiologist for thirty years in the local hospital but he isn't every political and thus not very ambitious so he hasn't risen in the administration which is okay by him. He likes his work and does a lot of private practice to earn a good living. His work in the hospital gains him a public pension and pays off his education funded by the state, the private practice buys him motorcycles, German cars, an RV and vacations. At home he sweeps the kitchen floor like any dogs body. 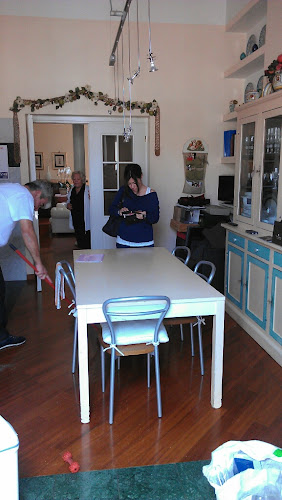 His mother in law lives up the street and at age 92 she is still driving, and is sufficiently alert to beat her son in law and his daughter at cards. Signora Giuseppina startled me by winking and twisting her mouth using "secret" signs to tell me what cards she was holding. We were using traditional Italian cards, a pack of forty in four suits reminiscent I am told of the Tarot pack. My hand was terribly weak, no high cards, no face cards, no aces. We paid the price. 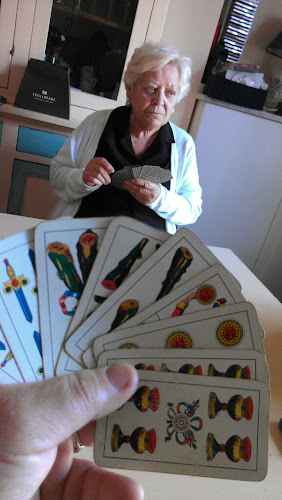 Giovanni was into it trying to get his daughter to meet his expectations. We beat her back thanks to my partner's high cards. Tre sette is an ancient game I learned as a child and we passed many summer afternoons throwing down cards and shouting ourselves hoarse in the village square waiting for the heat of the day to pass. Its a game that requires players to follow suit and the three is the top card, then the two and then the ace. Scoring is a little complicated but if you can remember cards you can do well. Giovanni thinks he can keep count of the discards. 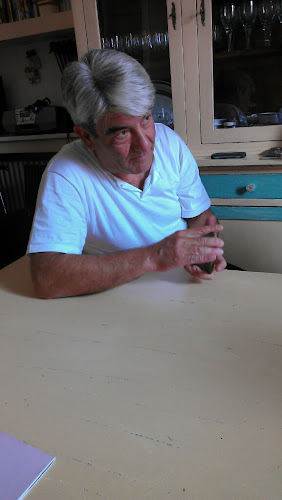 It was a pleasant way to pass an hour as Eleonora took a break from driving lessons and Giovanni and I waited to take an evening walk. 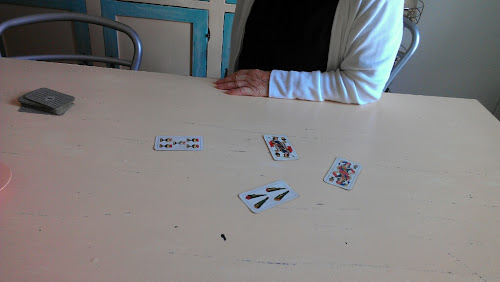 We ended up thrashing our opponents as was right and proper. I had a much better hand later with lots of faces, colors and a big fat ace in the form of a plump bird with a crown on its head. 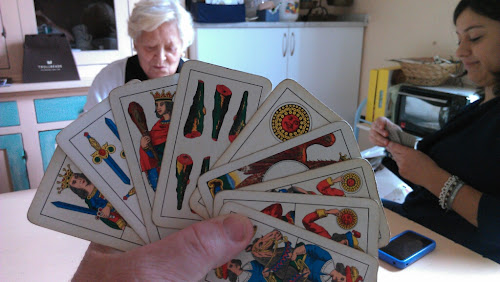 Waiting for Giovanni to get his myriad things together to go out I stopped in his study to read a motorcycle magazine which was where I noticed once again the picture of him getting married some thirty odd years ago: 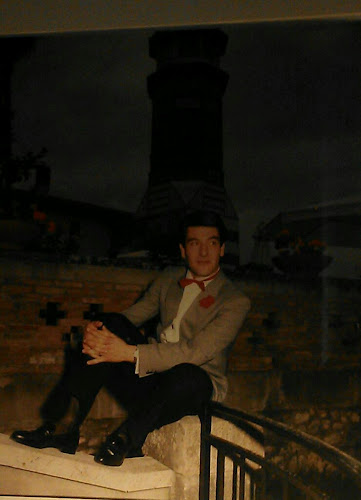 And Rossana his wife trying on his beret which he wore during his year long national service (now abolished in Italy). Time has passed. 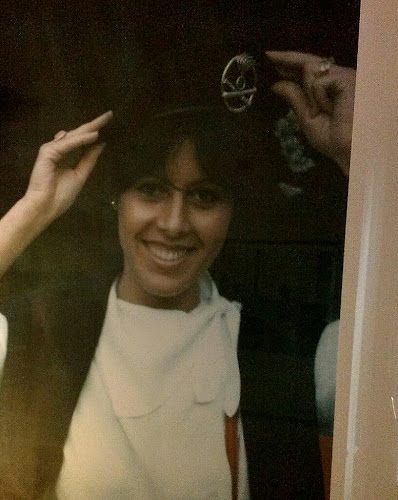 My suitcase was a reminder of the present as I struggled to get my wife's food requirements into my bag, flavored pasta, jars of truffles, particular Italian candies and my favorite toothpaste, The Captain's paste. Eventually I got the bag to 48.7 pounds, just under the fifty pound limit, using the digital scale my wife had thoughtfully provided. No overweight charges for Mrs Beattie's little boy! 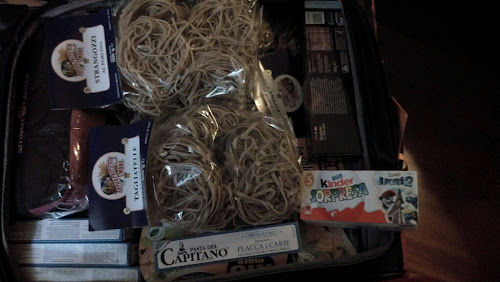 Shopping was actually quite easy in this vast spacious ipercoop (hyper-co-op) as they call the enormous Costco-sized supermarket complete with underground parking and every single product you might want, including three dollar coconuts and equally expensive limes 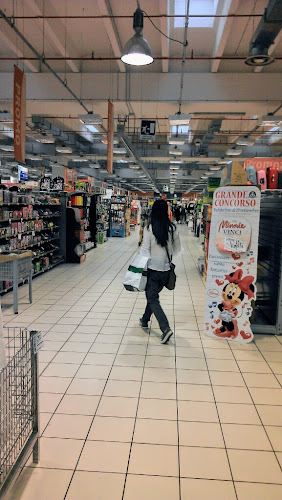 Finally we got out walking and cruised Corso Tacito, Tacitus Street if you can imagine such a classical name for a thoroughfare. My hotel where I stay when in town is on Pliny The Younger Street! The first casualty I noticed of Italy's deepening recession was Mickey D, a former Internet site which I found useful. A friend of mine told me cold pasta at MacDonald's is one his favorite fast foods. I never got to try it but he is a gourmand and highly recommended it. 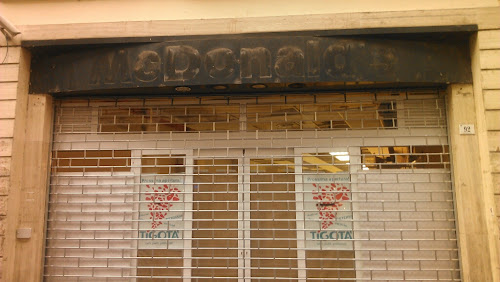 This elderly Vespa 50 is the spitting image of my first ride bought by my mother in 1970, except mine was orange. "You wanna buy it?" a voice boomed out as we (I - Giovanni is no Vespa fan) admired it. 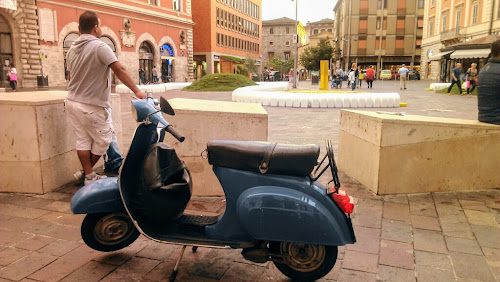 "It spent thirty years in my garage. I pulled it out last year to save gas, gave it a new paint job and I ride it to work every day, and I really like it," the pizza parlor owner told us with some satisfaction. I told him I hope to do the same with my 1979 P200 if I ever get it back from Pennsylvania where it will be restored, soon I hope. 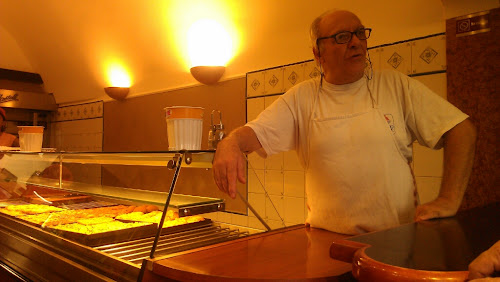 There was market stall selling hunting gear for the newly opened Fall hunting season. Italians love to go out and shoot small birds with large shotguns and they roast the starlings and sparrows over an open fire for dinner. If you have never been presented with a roasted feather-free small bird as prized treat and been required to bite the brains out of the little bald cooked round head and express deep appreciation you haven't lived. I hate hunting and won't do it. 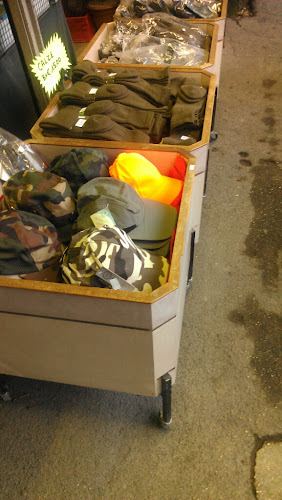 We next stopped at Vitali Amleto, the Honda dealer on Via Roma where Giovanni bought his Benelli moped forty y4ears ago. The new-ish CB1100 was on display and we admired it for a while. I don't see where it is better than the Bonneville actually but it is a nice bike. 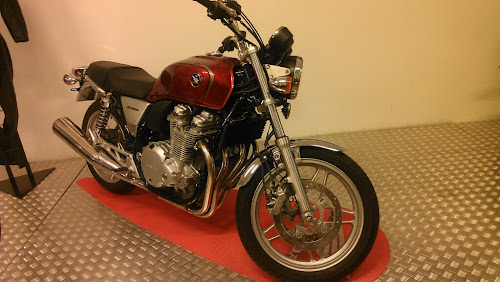 And this 350cc survivor with 1500 whole miles on the clock carries the original Vitali sticker from when it was brand new. I nearly bought one of these in 1976 but I went with a Moto Morini 350 Sport instead and never really missed electric start and turn signals. 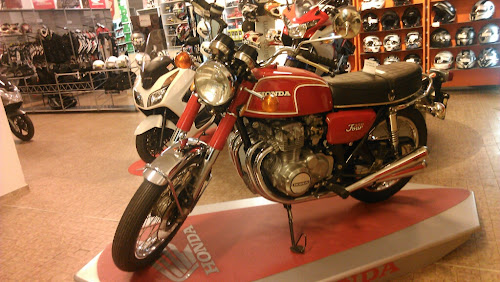 That was all the nostalgia we needed to walk and talk about the past and how much better motorcycles are now but how much more fun it was to be less regimented back then... the usual. "Hey Giovanni!" a bum hailed us from his seat on a nearby wall. It turned out he was waiting for his wife and we exchanged pleasantries. Giovanni always has trouble introducing me as American or something. I call myself emigrato which all Italians understand as people have been going abroad for work forever. When Giovanni insists I am American I re mind him that my family has lived in Umbria for three hundred years after moving there from Viterbo before that. My ancestors were Etruscans, not from the Mayflower. 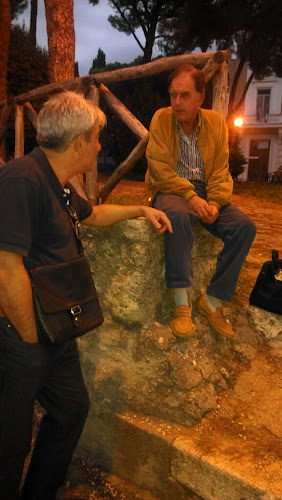 Terni is a modern city built on a grid pattern, bombed flat in World War Two to discourage production of steel and guns but there are parts of this non-tourist town that have a certain aged beauty. 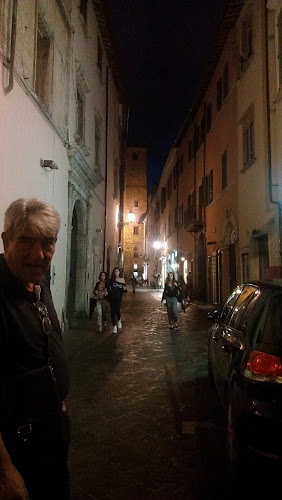 Of course we got flagged down again, this time it was Antonio, Giovanni's younger brother and the living breathing stereotype of a spiffy fashionable successful lawyer. These two professionals would give my late Jewish mother-in-law palpitations. Antonio rides to his office in the pedestrian zone on an electric bicycle and he took off after wondering vaguely about a possible dinner date as silently as a witch on a broom. I remember him as a twelve year old boy bugging us, his elders, to come out and play. Time passes. 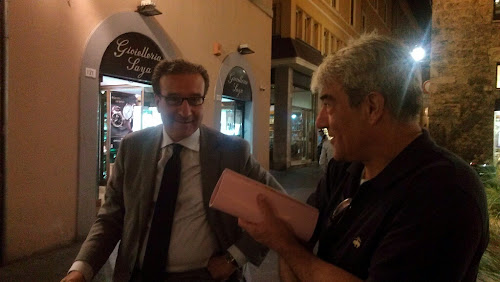 Giovanni doesn't make time to go to the movies and I am not fond of the dubbing used in Italian films. The voices are strained and as weird as it is to see Italian voices coming out of Hollywood actors the artificial quality of the dubbing voices bugs me much more. Normal delivery is apparently frowned upon. Oddly enough I n Italian movies made these days normal voices are the norm. Fancy a Saturday late show starting at quarter to one in the morning? 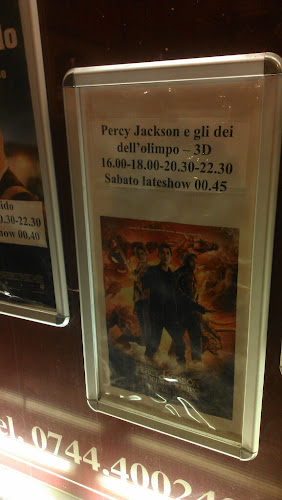 A bit of excitement to remind me how glad I was to be away from work. Firefighters were busy being admired by a small crowd as they removed a loose piece of guttering battered by winds and rain that fell on the city while we were riding around the Alps in blazing sunshine. 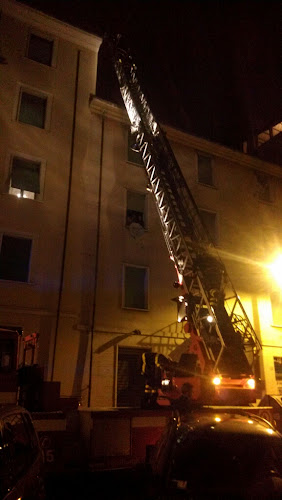 We meandered home with some fried rice balls to supplement a dinner of left overs, all talked out and ready to think about bed. A game show on television did nothing for me, though there are a couple of original detective shows on Italian TV I'd like to watch. Don Matteo about a sleuthing priest in Gubbio is a huge success and Commissario Montalbano is about an eccentric and willful policeman dealing with crime in Sicily. To watch the videos at home I'd have to get a converter and blah blah blah. Better not to get attached! One day all electronics will be universal I'm hoping. 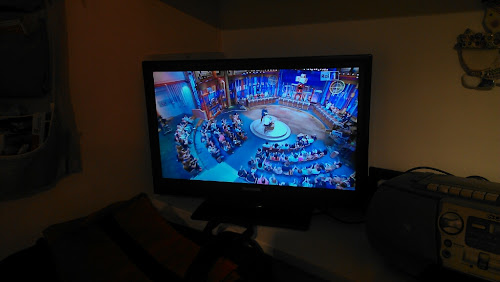 And so to bed. Tomorrow another day a last ride and then back on the plane home. 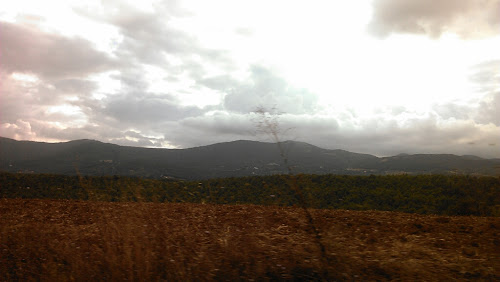 I was glad to get back filled with memories to carry me through the winter, a photo album on Picasa with several hundred pictures and lots more things to talk about next year.