I was standing at the end of a leash watching the wind flutter flags beyond the row of charter fishing boats in Marathon. And then I read the sign. Fishing boats...no fishing. I know what it means, no fishing from the pier but the implication struck my funny bone.  No money to be made from people standing on the rocks tossing a line into the billows my more cynical inner voice said. Lunch of fresh fish was good though. 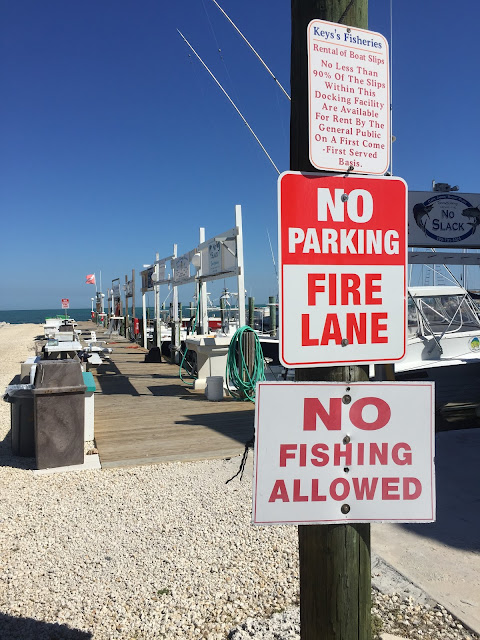 Later this summer lobster season will kick in and all these pots will be dropped in the water and thousands of lobster will be caught. How they aren't wiped out every year  don't know. Then there is the two day amateur lobstering event encouraged to bring visitors to Keys that no longer have quiet seasons. They slaughter lobster, break rules and give themselves heart attacks from time to time as killing lobster is more strenuous than they imagine. Through it all the lobster survive. I am no great fan of lobster meat and have been a marked man since I once described it as a string cheese with a fishy flavor. 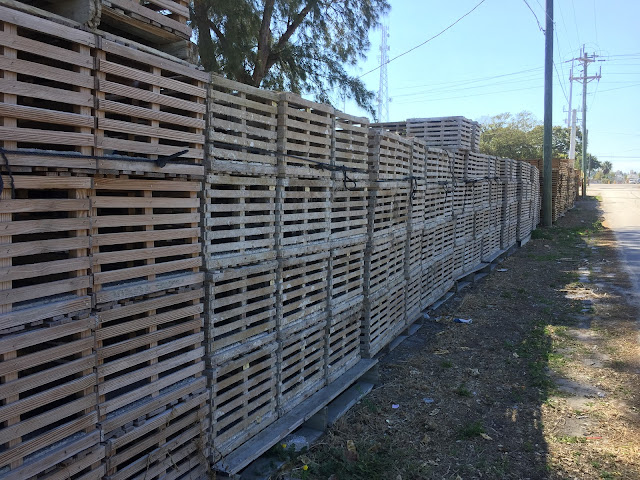 Rusty likes the smell of lobster pots and he took me a merry dance on what was a quite warm day. He caught and killed an iguana while on the leash which astonished me and I shall spare you the pictures as some people are fond of iguana. They are like lobster invaders, not easy to catch or kill and they eat everything in sight, wrecks birds nests and destroy plants and gardens and so on. Rusty hates them and I do not much care for them either. I am no longer quite so surprised he made it for four years on the streets of Homestead. Judging by the state of his nerves when I got him they weren't easy years, and he no longer feels driven to eat his prey but thrown back on his own devices he's do better than you or I. Amazing dog. 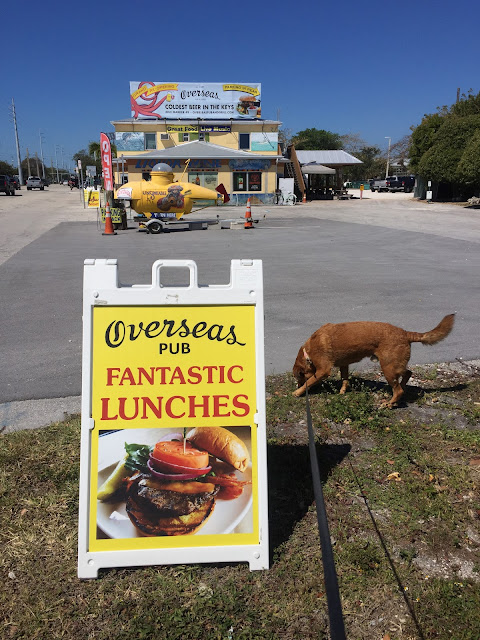 This summer I have a vacation booked in Europe for most of July to see friends and family in Italy after three years away. I have mixed feelings, principally I'm not keen on leaving him behind though he will be in good hands. I know, it's months away but already I'm thinking about the pain of separation. And he will be fine. 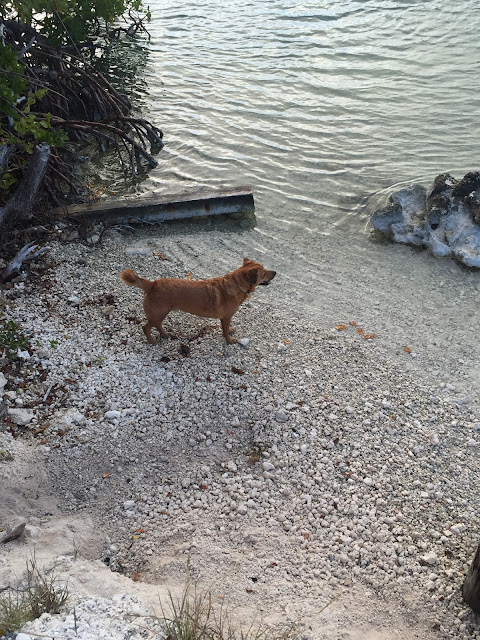 He waits for me every morning at the top of the stairs. In the early days last year he used to run down unable to contain himself. Now he knows I come upstairs to get changed (and give him a treat) so he waits and jumps all over me as I reach the top step. These walks in the wilderness are my chance to put the night's 911 calls behind me and his chance to be a dog with a lively curiosity. 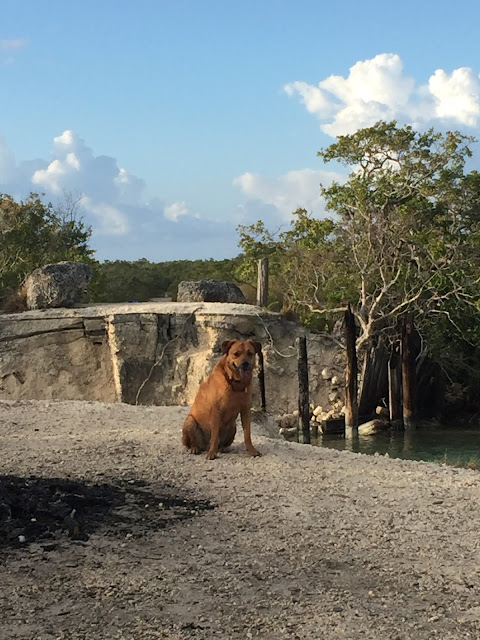 I feel lucky to be out on these trails with a chance to decompress especially when the main road is generating complaints of all kinds, too much traffic too many people, the Keys they assert are full.It comes as no surprise to anyone who hasn't been asleep. You can't keep building and expect to maintain the same quality of life. I met a guy as we walked back to the car. He was carrying a big stick and i wondered what he intended to bash with his club.  Rusty ignored him and he used my little dog as his justification for the club...just in case. I have no idea what fearsome things outsiders expect to find on these trails but after decades of walking my various dogs out here I have never been molested by anyone or anything. I trust it will stay that way. 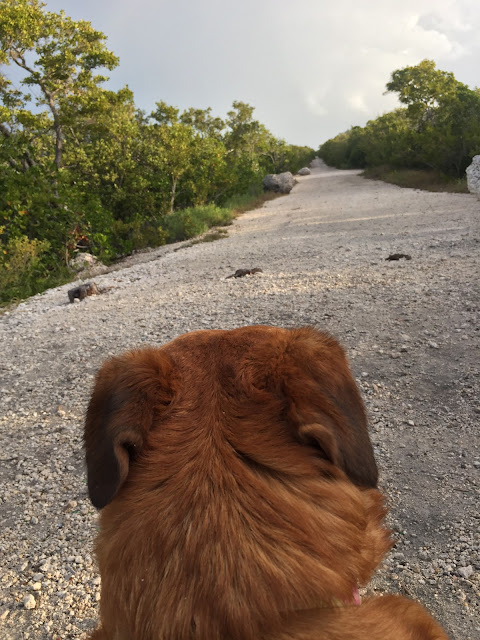 I stop from time to time as I ride Highway One and I still take time to admire the views. I find the visitors who slow down and stick phones out of car windows absurd in their efforts to multi task on their vacations. These places, unique in North America deserve a little time and respect to be enjoyed. The great thing about driving the Overseas Highway is that you can pull over and stop almost anywhere - and the few places its too dangerous to do so are clearly marked. The rest of the roadside shoulder and numerous turn outs are all available for you to stop and listen and look and take a composed picture for the scrap book. 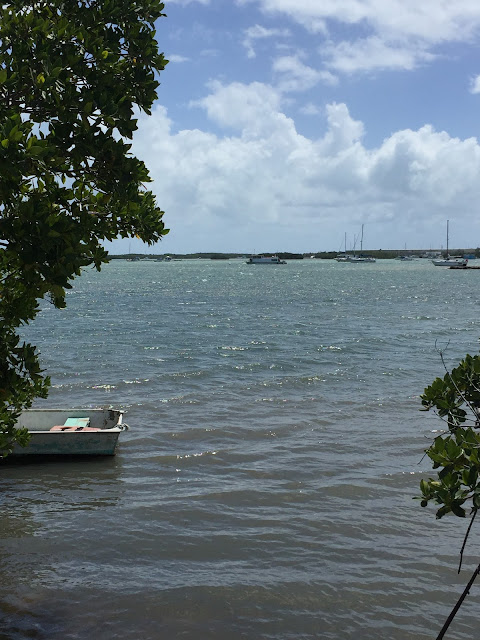 I was alone on the headland above the creek and I thought to myself how pleasant it is to be alone with my dog and my thoughts in this place. I hope your place treats you right this weekend and may no big sticks be in your immediate future. 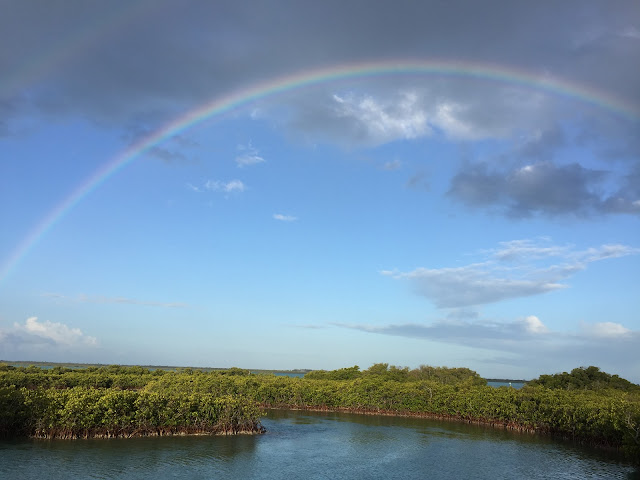