Come home, slip into daily life and then ask yourself: where exactly is it I live? 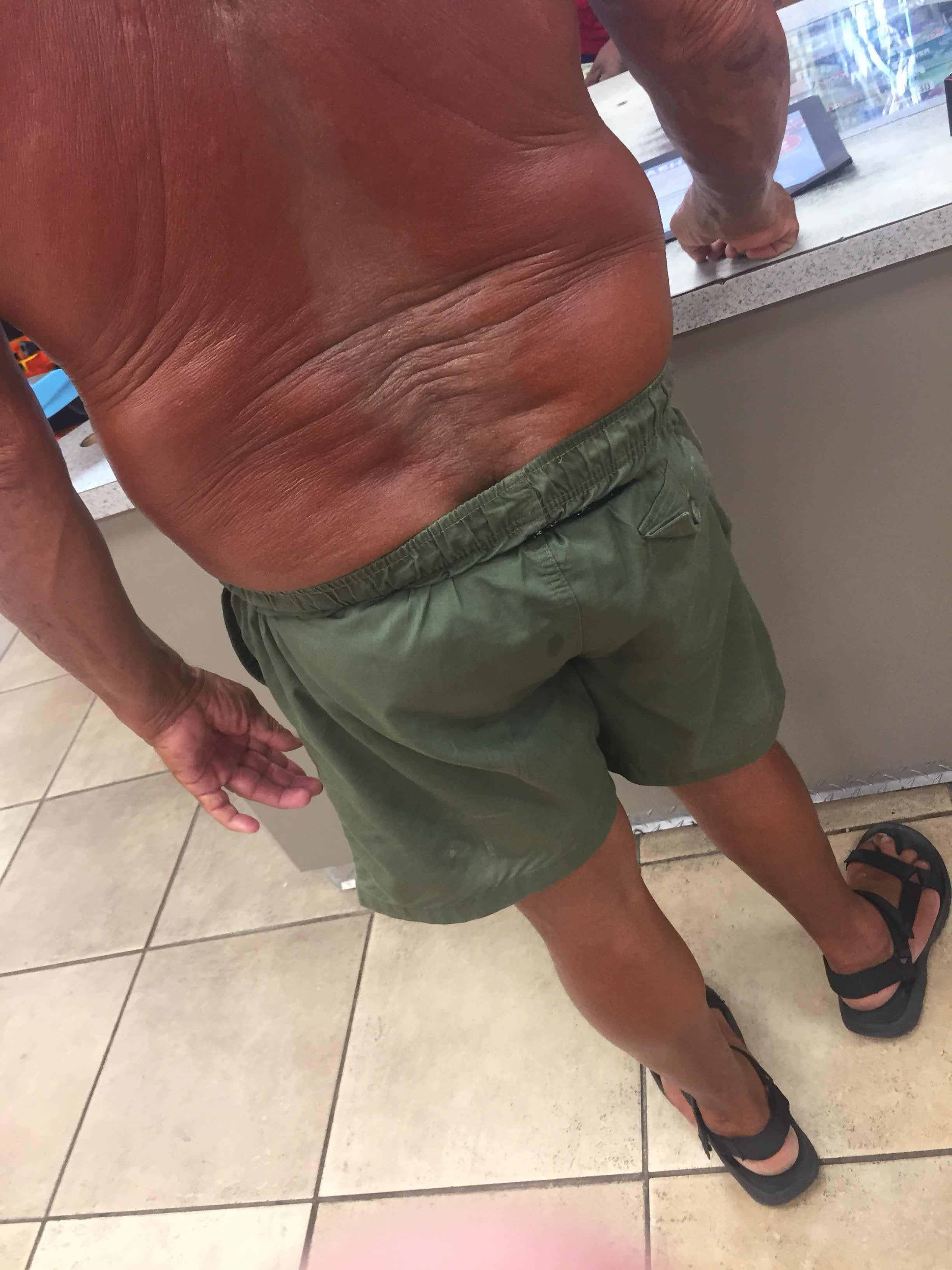 In my defense I was in the convenience store  escaping the heat and I was standing in line  to pay for a dehydration special when I remembered I don’t live in the fashion center of the world. Thank God people like this live amongst us in the Southernmost City because as bad as my clothes sense may be, and boring, there is always someone ready to be the focus of startled attention. 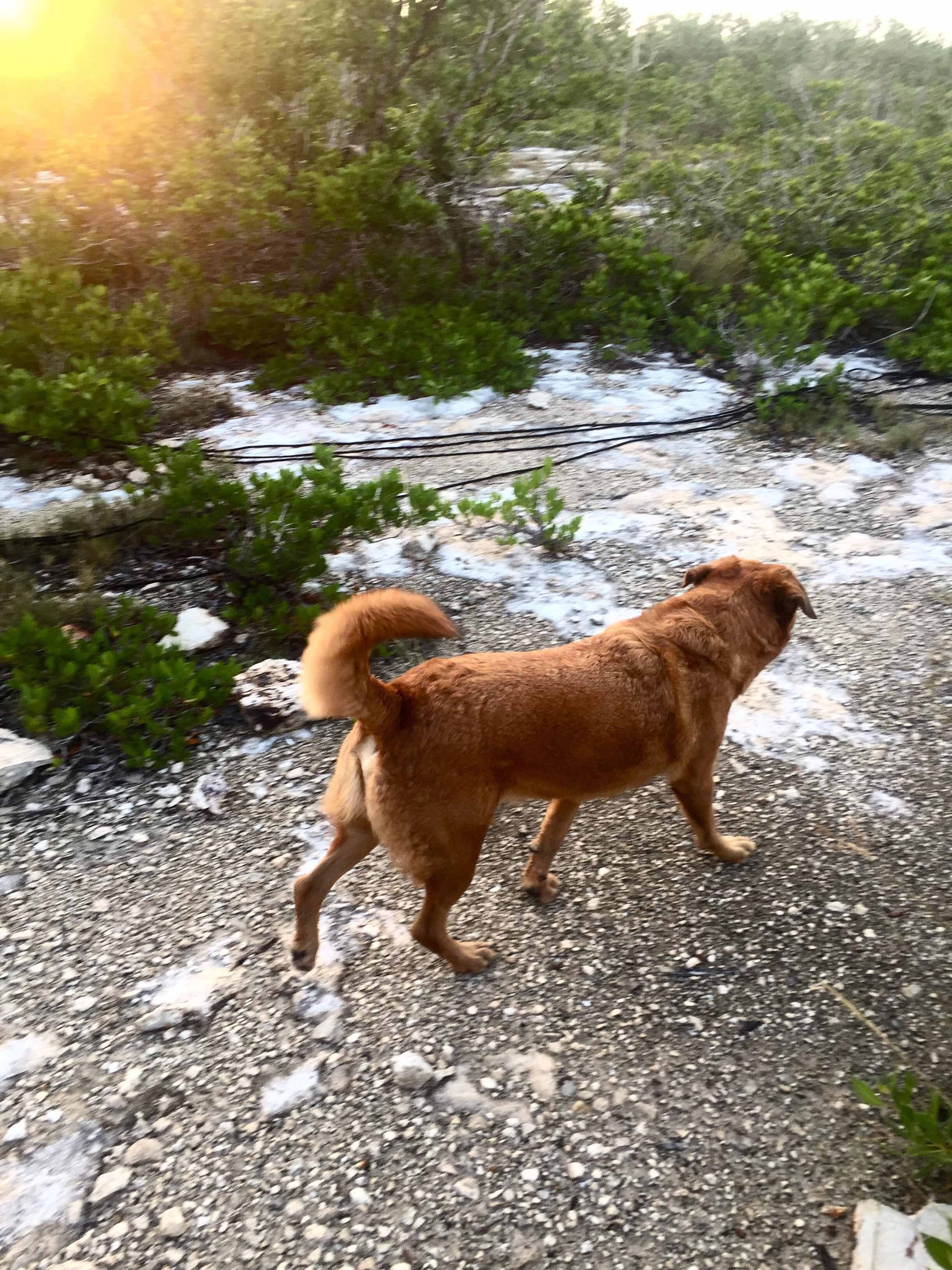 And when all else fails there’s Rusty. Might as well get out and see if the mangroves are still there. They are.

And that strange map shows a power outage affecting a thousand Lower Keys customers. Including me. Air off, Netflix off, clock off.  Grr. Give them credit Keys Energy was on the job right away but I went to work grumpy and a bit late but leaving my wife with power at least. We were powered up at work as usual: 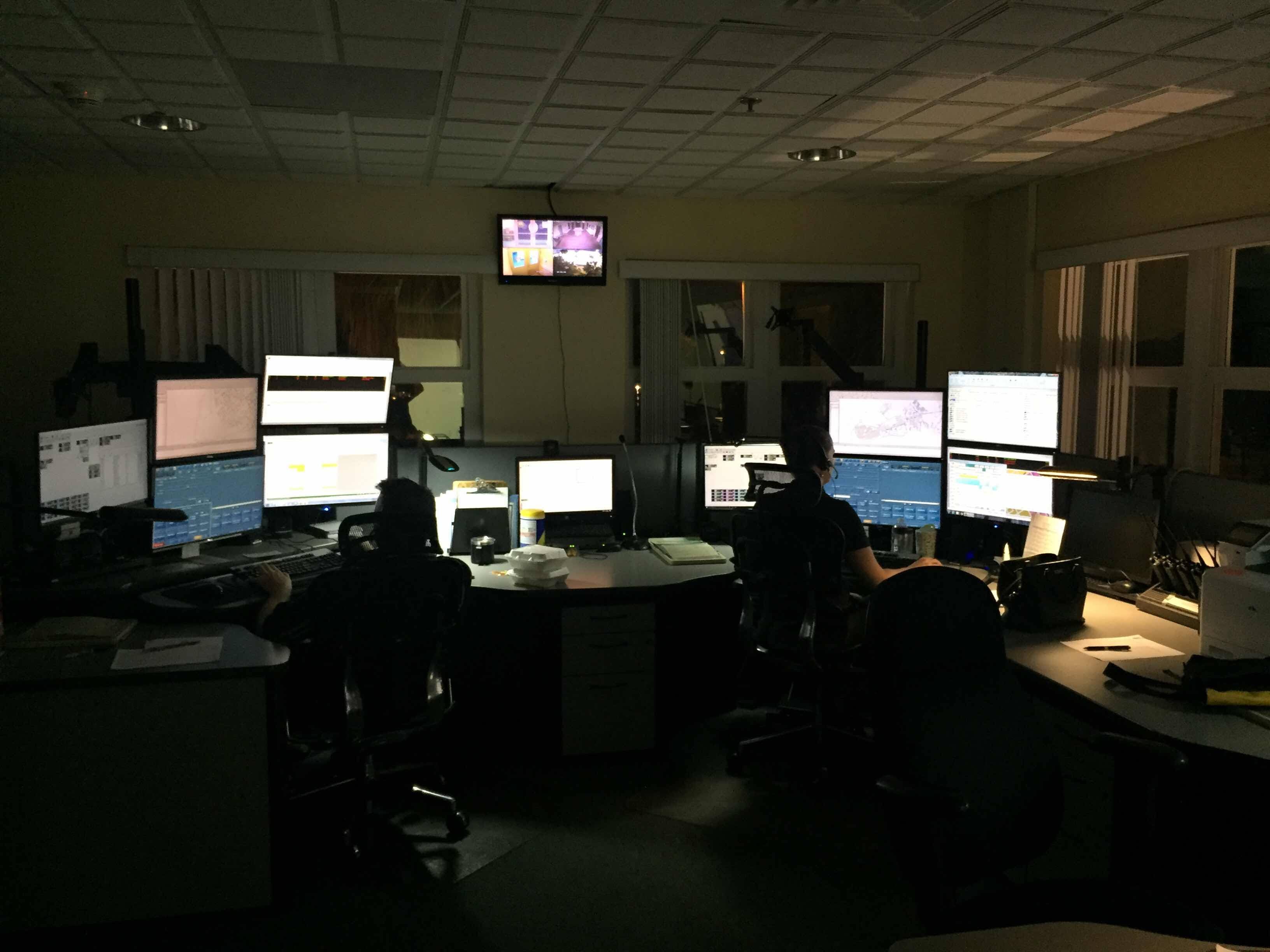 I took a break half way through my overtime and spent a little time on the balcony at the back of the police station.  This is where we have access to the outside air and a view that never changes behind the car dealership next door!  These days the prison block that is the middle school rises up to the south and there behind it I saw the moon. It wasn’t a great picture but it was a moment I took to reflect on vacation and it’s counterpart: being in my routine. 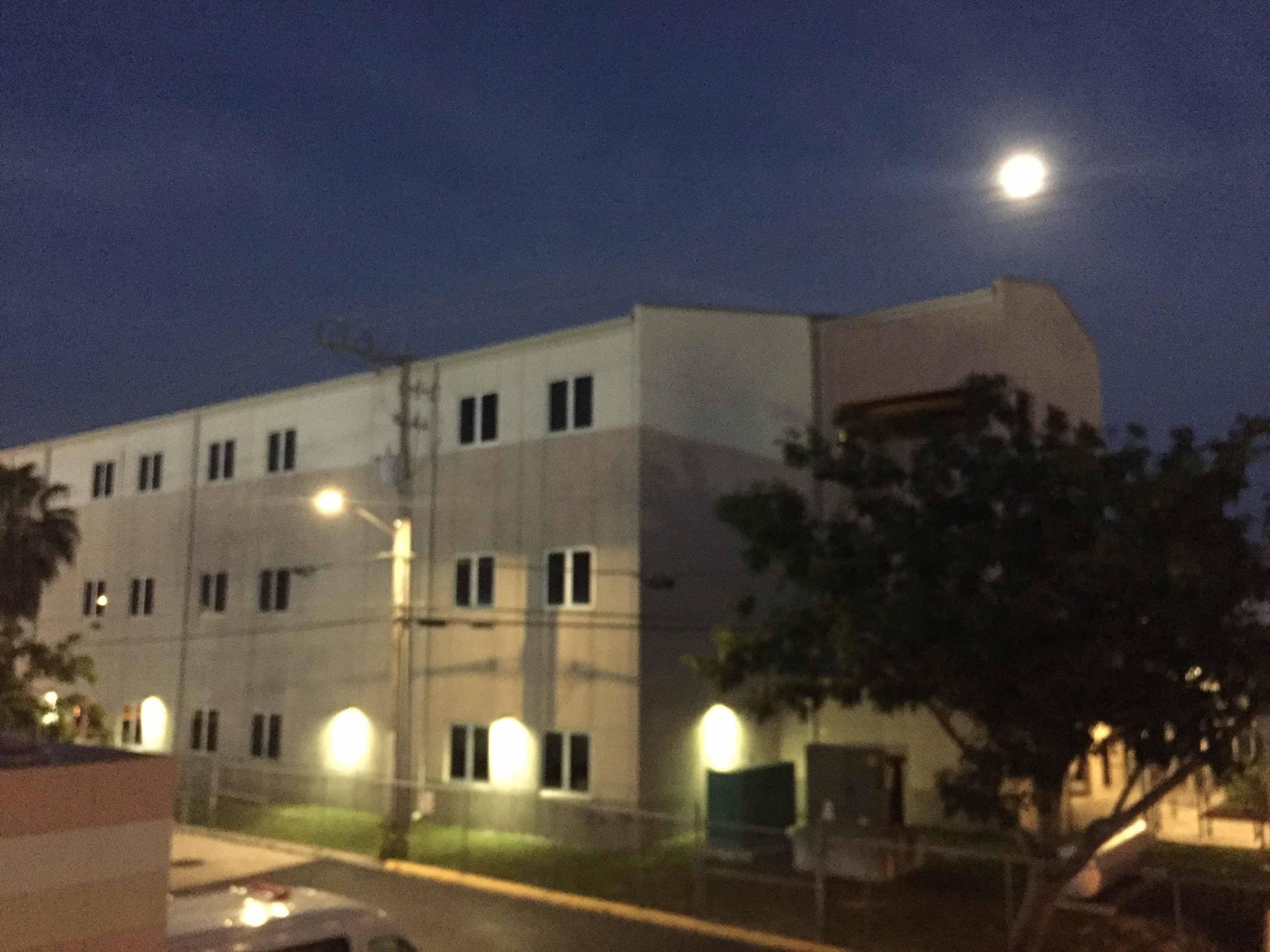 Back home Rusty was on the couch as I climbed the stairs at 2:30 in the morning, but he was ready to check the neighborhood.  We do this quite frequently when I get home in the early hours and I enjoy being out alone with him. But last night dragged its feet a bit.  He had to check every rock, every lamp post, every blade of grass. He had been away for two weeks so everything needed inspecting, obviously. 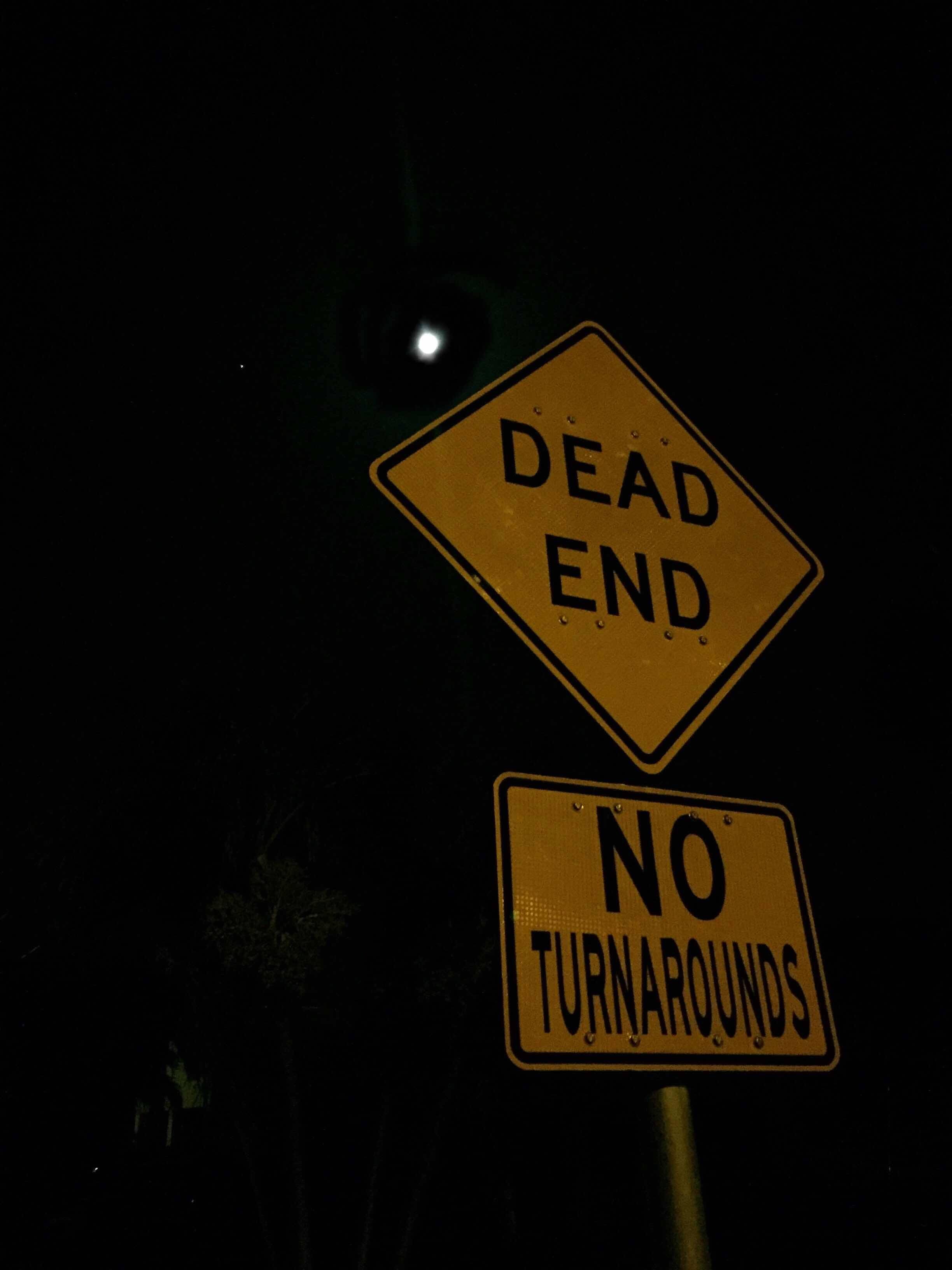 While he ran back and forth and I kept a benign eye on him the hot night air did not slow him down as I had hoped. Everyone complains about the heat which should not come as a surprise in late July, but to me it feels about average. So I should not have been surprised Rusty had lots of energy. I was home abed by 3:30. The arc of twenty four hours should have brought me back to my gym but I got derailed.  A call from the mechanic said the part was in and he could install it right away if I got there NOW. Here’s the thing: when the drivers door handle breaks suddenly it is the most crippling annoyance. Wind the electric window down after remembering not to turn the engine off. Reach out. Open the door. Wind the window back up.  Grrr. I went straight to Oily’s; sod the exercise. 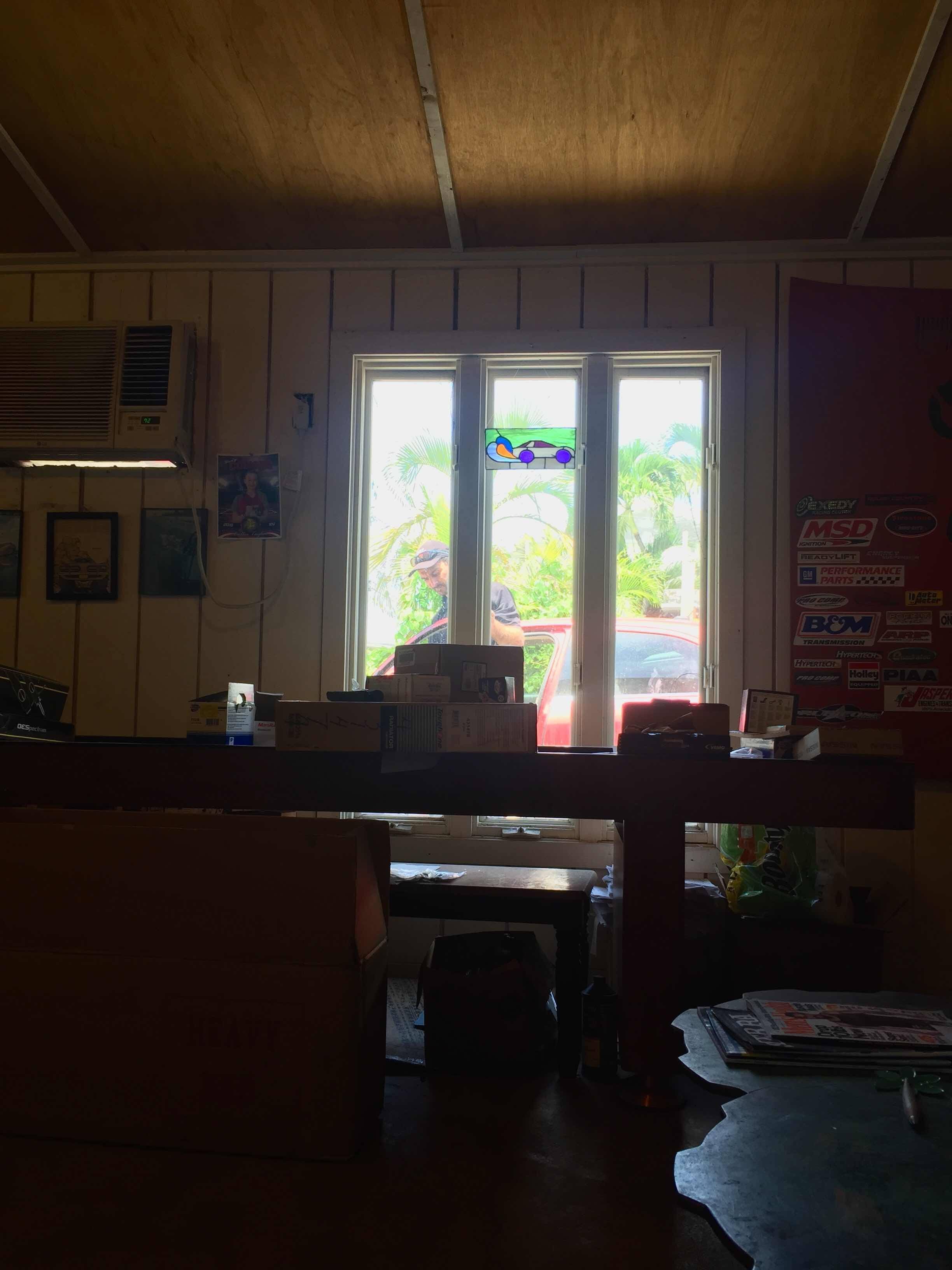 After three days without a door handle it felt lovely to have a complete car back. Lunch with friends presented me with a new experience. Tea in a French press. It was okay.  I got a vegetable sandwich instead of the steak sandwich I ordered and when I told the waitress I was okay with it she was pathetically grateful for me not blowing up. What the hell is wrong with people? Get mad over a sandwich? 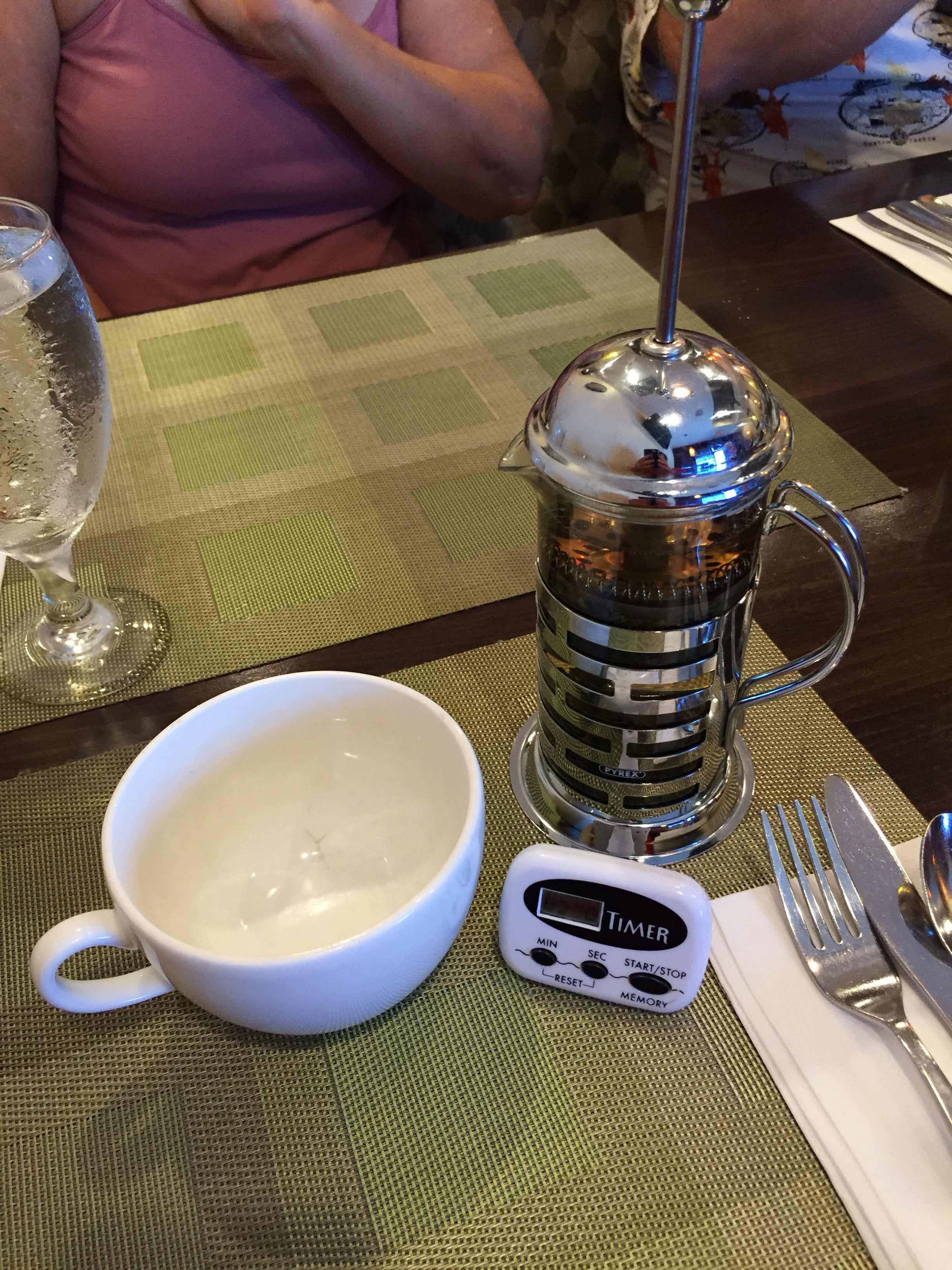 Lunch was conversation and sandwich and tea and then back out into the heat. In twenty four hours I should have a new iPhone a new shift at work and a whole bunch of angry drunk people dialing 911 all night long.  I hope it’s so hot they all retire early and the power doesn’t go out so the air conditioning kills them to sleep.  I’d like to be home in bed before they wake up.
Posted by Conchscooter at 4:14 PM No comments: