Rusty likes to sit from time to time on our walks and watch what's going on. I am happy to join him. 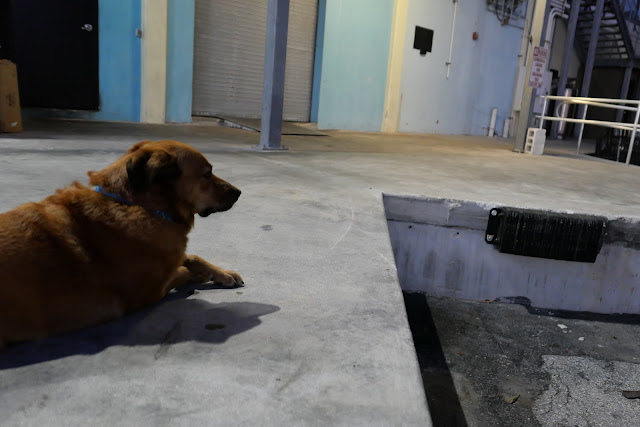 The lights will lead you to the toilet block overlooking the water and its surprisingly scenic. 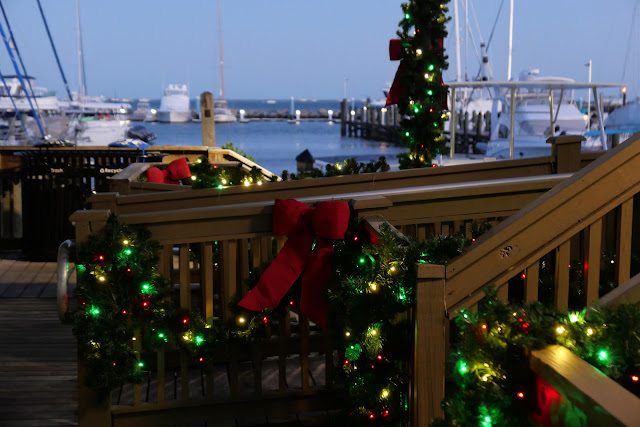 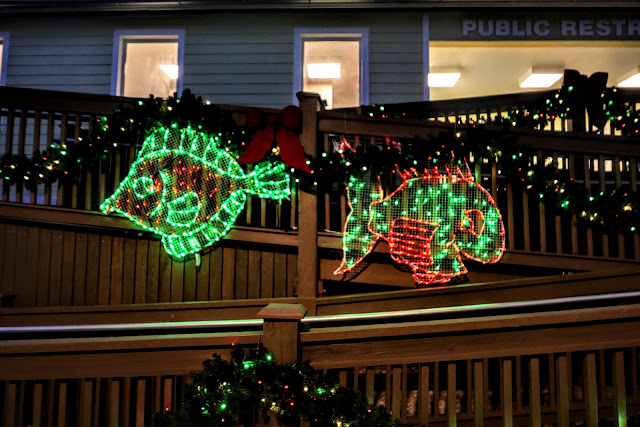 Turtle Kraals is still here and every time I pass the signage I feel compelled to recall it's passing before it becomes something new. 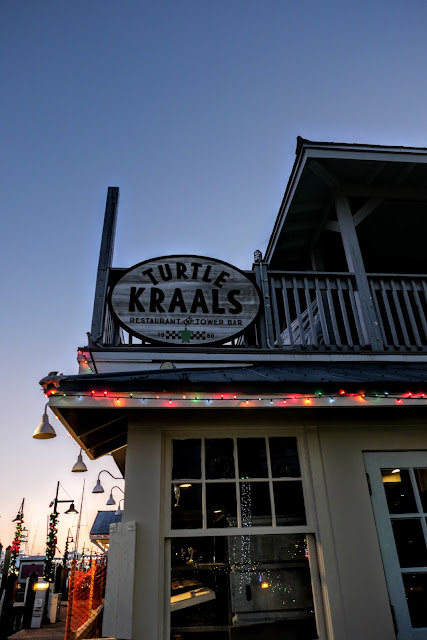 The windows are growing dusty and the decorations are being removed with a  few notable exceptions. I doubt the Conch Republic Navy will survive the passing of this older generation, and more's the pity. 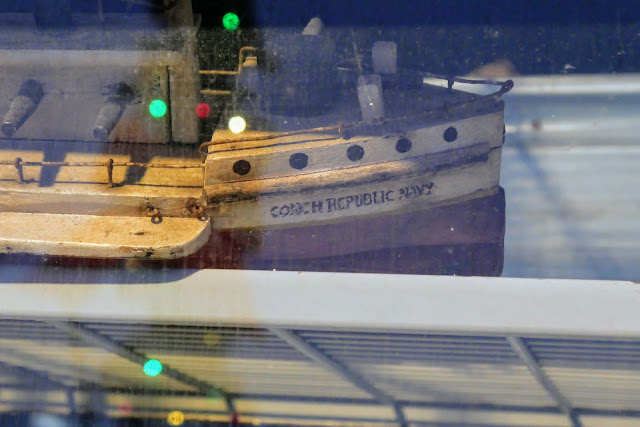 The turtle museum, which ironically will outlast the Turtle Kraals restaurant. The pool between the two is the corral ("kraal" in Afrikaner) where the captured wild turtles were housed prior to their slaughter. 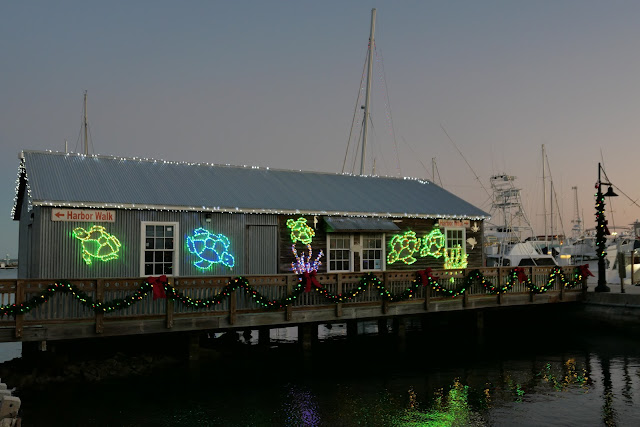 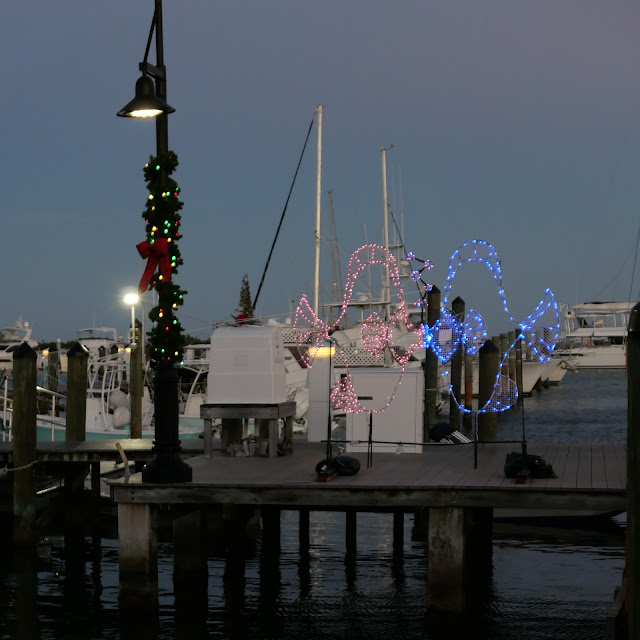 Winter dinghies are coming back but obviously in far fewer numbers this season. 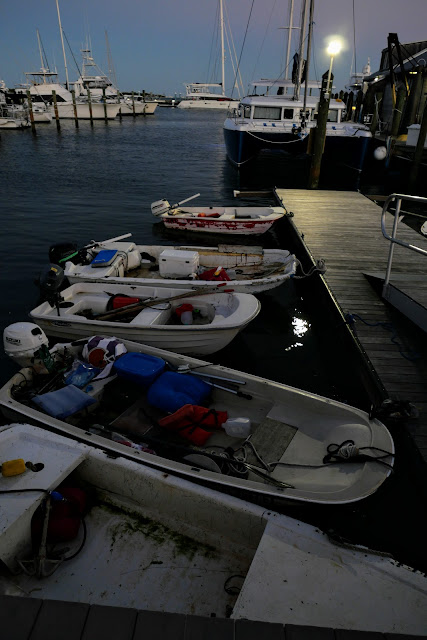 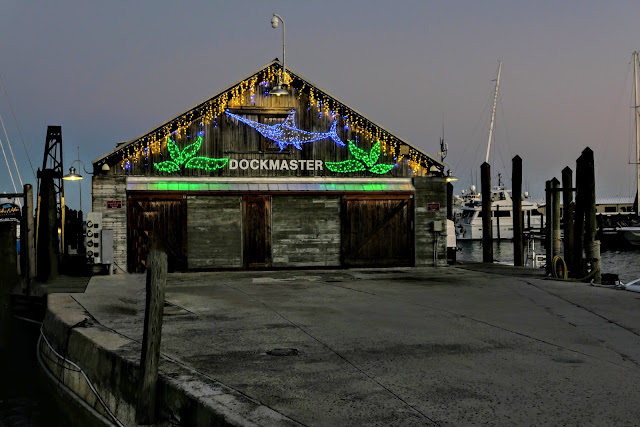 He does spend a fair bit of time waiting patiently for the photographer. 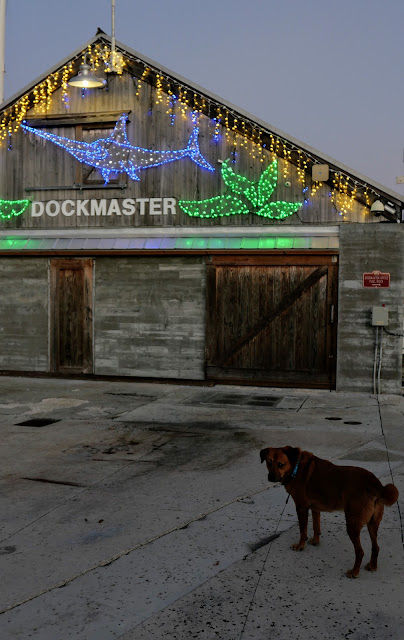 One dinghy user took exception to me standing on the dock while Rusty sat and watched the world go by. I only noticed him when he walked up to me and pointed his phone in my face and said "cheese" loudly and ironically as though getting me back for standing with a camera. As you can see he was of no interest to me and I wasn't sneaking his photograph in my landscape picture of the early morning light over the harbor. I was waiting for my dog and getting cold in the north breeze while doing it. I was quite pleased my tourist disguise was working. 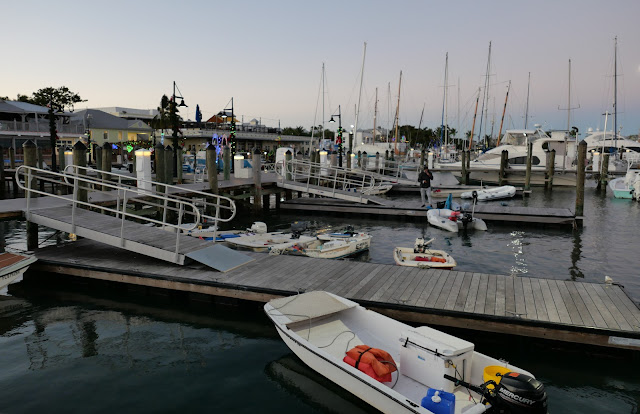 Hawaiian shirt, camera around my neck, looking for things to catch my interest, I often get lectures from people explaining Key West to me as though I have just arrived in town. One of the best things about being a police dispatcher (aside from the health and pension benefits) is the anonymity of sitting in an office and not being on patrol in a  police car. When I have had to do a ride-along  as part of my refresher training I always feel really uncomfortable sitting in the front seat of a police car.  Even when doing nothing more exciting than sitting at a traffic light the stares bore right through you. Cops hate the idea of sitting in an office through their shifts but I cannot stand the attention of a police uniform in public. 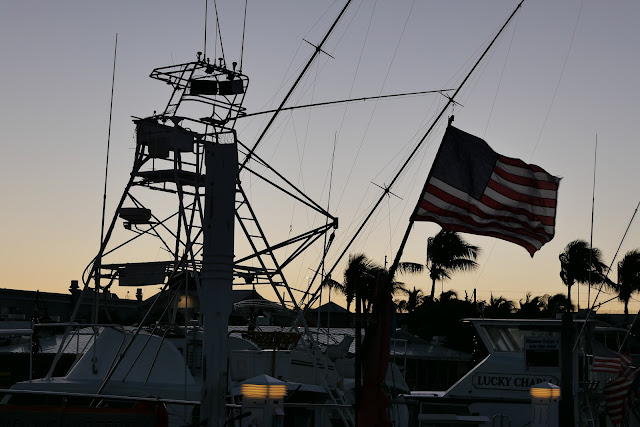 To be identified as a tourist is totally liberating and I like being mistaken for a  "touron" the cruel and derogatory term some locals use for people who come visit Key West with joy in their hearts and full wallets in their purses. You will find the less time someone has lived here the more they try to differentiate themselves from visitors by looking down their noses at them, an attitude I find a little odd. On the street even with my dog I am the invisible tourist and occasionally I take abuse for it, but I get paid to be abused every day on the phone anyway. Cheese! 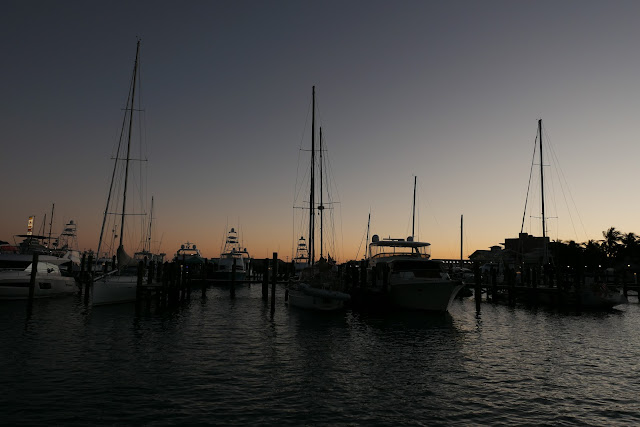 Mind you it takes me a few weeks to adjust my driving expectations as roads clog up with winter traffic after a Fall season of few visitors, fast internet and open roads. But once I step out of the car and look around expectantly, glad to be here, I melt into the background of people not lucky enough, or tough enough to hear the barflies say it, to live here. Honestly anyone can come here and give it a go and most people have very good reasons for not making the move but I suppose it is human nature to boost yourself at the visitors' expense. When I lived in California I discovered two things about the Golden State that surprised me in 1982. Californians never refer to their state as "Cali" and San Franciscans never refer to their city as "Frisco." One newspaper columnist suggested it was because both nicknames expressed excessive familiarity not appealing to locals. And we of Northern California never refer to Highways as "The" 101, that is a usage reserved for the lower life forms prevalent in Southern California.  They really do make that distinction and it has stuck with me. 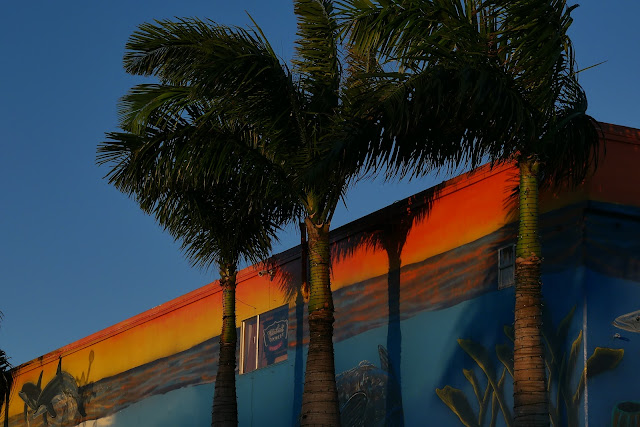 So if you see me being dragged by a  dog and you want to stop me and roundly abuse me and explain to me how Key West really does have wild Cuban fighting roosters on the streets and how Hemingway really did transport a bar urinal back to his home, go right ahead. I will express suitable astonishment and ask to take your picture. If you want mine you are welcome and I do know how to say cheese.
Posted by Conchscooter at 7:34 AM 4 comments: