We have been watching California shrivel up in an apparently endless drought that would have me concerned if I lived there. I did in fact live through what was then an historic seven year drought and enjoyed ever minute of every endlessly sunny day, but this effort seems ominous and overpowering, with reservoirs empty and rivers shriveling up as fast as the aquifers dry and hollow out the very substance of the Golden State. 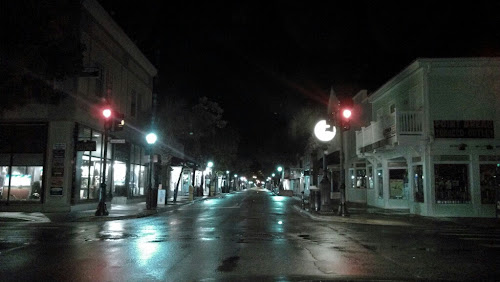 No such luck here in the Sunshine State where summer has been an endless parade of clouds and rain and thunderstorms and sudden winds and all the drama I love as long as temperatures in the worst of it stay well above 70 degrees. Cheyenne likes it well below seventy degrees but she has a couple of months to wait. 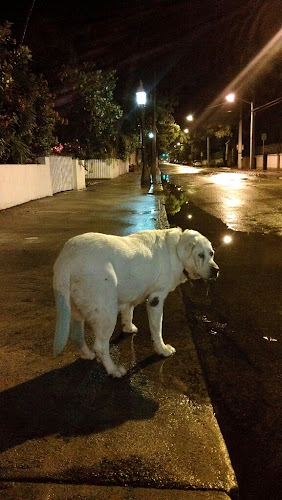 Spanish Lime season is upon us and  without warning you will find yourself rolling on these small green marbles littering the sidewalks under the trees. Why they are left to fall to the ground and rot I couldn't say, perhaps as a statement of abundance and surplus in our town, but Spanish Limes are delicious. Shown here from Wikipedia in all their lush glory, you break open the leathery skin with your teeth and pull out the little lychee ball inside, and suck the sweet-tart flesh off the over sized pit inside. The joy and irritation of Spanish Limes, aside from slipping on those abandoned on the sidewalks, is the taste of the flesh and the tiny quantity of it found on each fruit. Eating Spanish Limes can become obsessive. 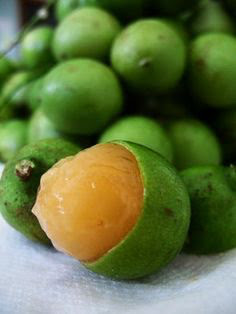 These reflections were prompted by several trees shedding their loads somewhere around Caroline and Whitehead which encouraged me to turn on my phone/flashlight and grovel around imitating my dog at a trash can. I salvaged quite a few intact fruit, knocked down perhaps by the recent summer thunderstorm winds, and we marched on, me dripping lime juice. I felt quite the philistine eating found fruit and remembering I have yet to visit the Audubon House. I will, soon, if not in October then in November. 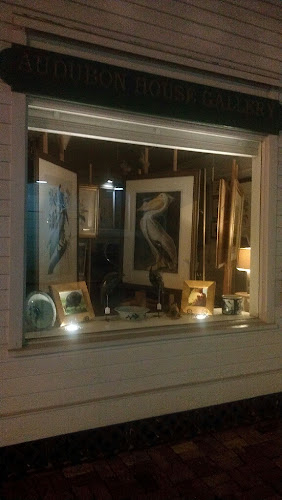 Audubon didn't spend long in Key West, a few months, long enough to slaughter a bunch of birds he'd never seen and reduce the flesh and feathers to Art. That Victorian propensity for killing that which you admire seems so alien these days as we number the species set for extinction, the reduction of habitat and the abundance of cement and plastic in our lives. "Here's a pretty bird! Let's kill it for posterity! Good show!" Odd people. Then I saw a couple of pigeons sheltering under a colonnade. I wondered if they thanked their lucky stars they were born common as dirt and thus of no value to Art. 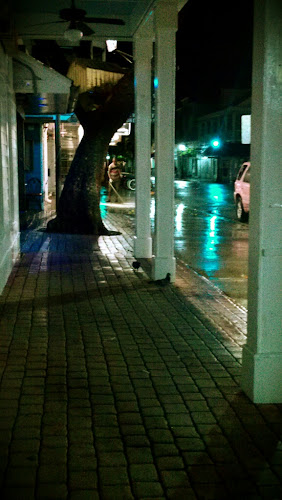 I first met Spanish Limes in St George's Grenada  a few decades ago. My wife and I had chartered a sailboat  for a two week cruise through the southern Caribbean and one of these summer thunderstorms of the kind that also sweeps Key West, kept us huddled below decks after we dropped anchor in the capital city harbor of Grenada. It was a miserable night, our first on our cruise, hot and sticky, the cabin cushions were made of some synthetic material that vaguely resembled the corpse of a particularly wiry sheep which made sleeping on them feel like a peculiar act of bestiality. We sweated copiously struggling to find a comfortable position in the greenhouse-like cabin, wrapped in damp sheets, stretched out on the floor (the sole landlubbers) as endless rained pittered and pattered on the cabin roof. 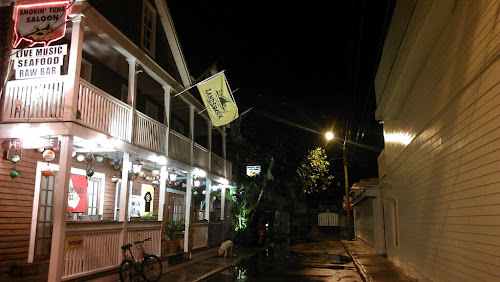 Morning brought steaming relief, and the sight of sunshine and a circular hilly harbor, the slopes rising straight up from the deep blue water, hillsides covered in greenery and rusty tin roofs. The Carenage they call the harbor, seen in the Wikipedia picture below, pretty much as I remember St Georges twenty years ago. We went ashore to look for coffee, the cabin being still too hot to contemplate breakfast among the disorganized herd of cushions piled in a damp heap. We also found the market, the sort of place you might imagine finding in a  small Caribbean country, piles of this and that, food, household items, clothes shoes and small mechanical parts, each table presided over by eagle eyed somnolent salespeople. My wife lives for this kind of shopping when we travel and we ended up spending some time moving from shady spot to shady spot checking stuff out. I discovered custard apples, large dark colored pine cones filled with yellow vanilla custard produced as God intended and easy to suck out without making too much of a mess. The best breakfast ever I figured.

We made our way back to the dinghy ready to blow the metropolis and explore the Grenadines, classic tropical island dots of palms and sand in a cerulean sea which we had read about in the gloomy California summer back home. But before we left for desert island living we loaded up with food. Serious sailors call grocery shopping "provisioning" as though they are equipping a 19th century man o' war for a distant expedition; my wife and I go shopping like the bourgeois middle class sailors we are. As we got back to the dinghy dock some kids came out with bunches of large green grapes offering us "christophenes" which we tasted and liked and bought bunches to decorate our cabin and our taste buds. I have never heard them called that since that trip to Grenada, but for me, Spanish Limes will always be christophenes and I will remember that start of a cruise that turned out to be a wild and most enjoyable adventure, so much so my wife was hooked on travel by sail from there on. And I am glad to remember the crazy anti gluten fad was not even on the horizon. 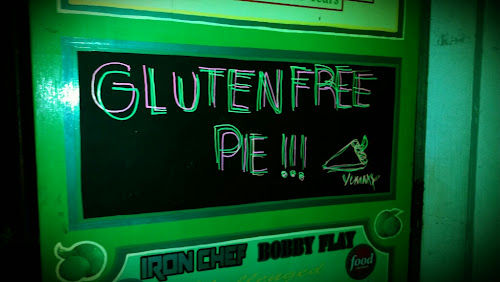 Key Limes and Spanish Limes should not be confused. Key Limes taste like you'd imagine but more concentrated, Spanish Limes are delicious in a very different way. 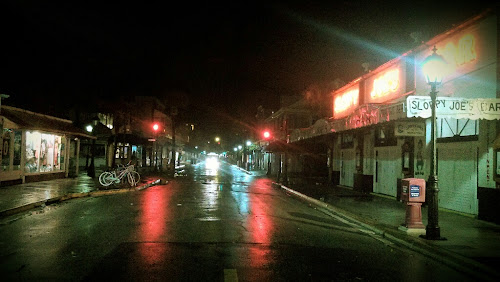 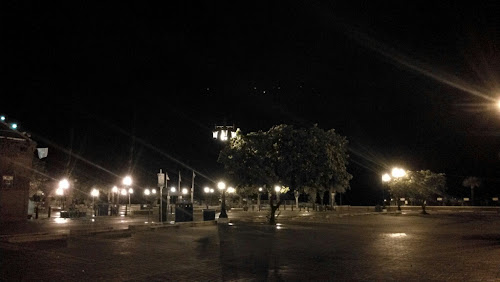 Rain on Duval Street and rain across Mallory Square. And below we see an MG Midget by a new trainee in dispatch. I wondered if it would start after the rainstorm and she looked at me as though I were an idiot. Her husband has restored it top to bottom it seems and the roof doesn't leak she said, reminding me I was riding home on my roofless Bonneville. 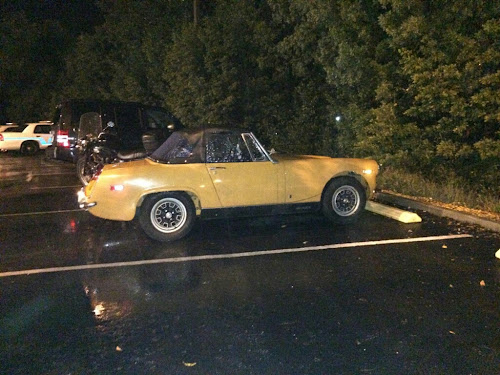 Actually it did fire right up, not drowned by the soaking wet night and she left the parking lot while I was still standing around, shrugging and dancing my way into my Frogg Toggs in an effort to go home mostly dry. Rain, not as much a pain in the Keys as you would think.