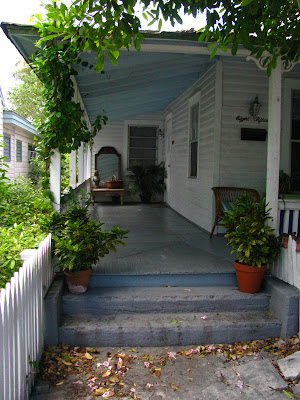 It takes no effort at all some days for me to nail down a couple of views of Key West that illustrate why people like to live in this town. Certainly the weather seems to be the biggest draw, especially if you like to ride a motorcycle (or a Vespa) but architecture can't be dismissed... 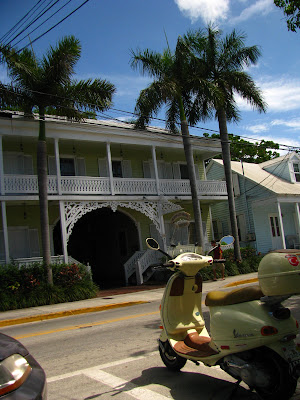 ... all those 19th century wooden homes with their gingerbread details, comfortable porches and indoor outdoor living. The archway on the picture above is the entrance to the Old Island House. 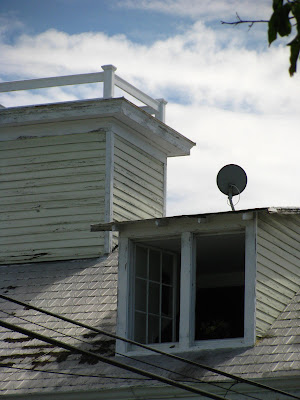 The details some times tell a story and these windows thrown open in the 91 degree heat set me to wondering who was toughing out summer inside. The satellite dish on the roof must serve someone else in the house, I figured, for i would rather have air conditioning than television if it had to be a choice. 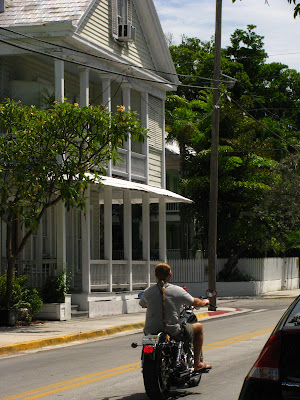 A perfect day to be out and about on two wheels.
Posted by Conchscooter at 5:01 PM No comments: Links to this post

These days all I have to do it seems is leave the house with Cheyenne, take her for a walk and I am greeted by the sun in a perfect blaze of glory. 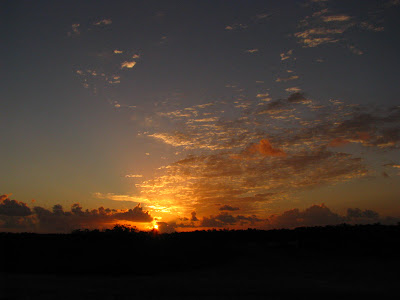 Every day, before I head to bed after work, I watch the sun come up over the mangroves and set the sky on fire. I never tire of observing the puffy pink clouds, the texture of the clouds themselves revealed by the sun striking them. The play of shadows and sunlight makes the clouds three dimensional as they hang overhead. 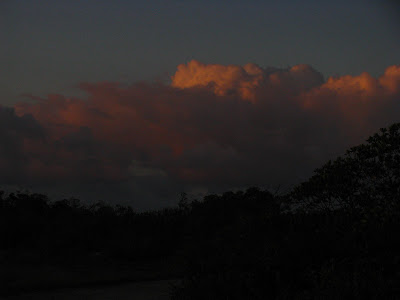 I am almost always alone in my contemplation of the heavens. Cheyenne wanders with her nose to the ground and I pretend to read the newspaper, more likely engrossed in the shape and movement of these Florida mountains. 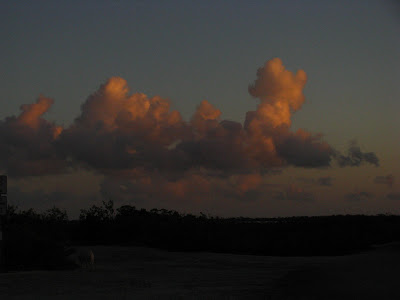 But it's not just clouds in the sky, there's the indefatigable Fat Albert protecting us from who knows what peril. The sun shines on the blimp and clouds alike. 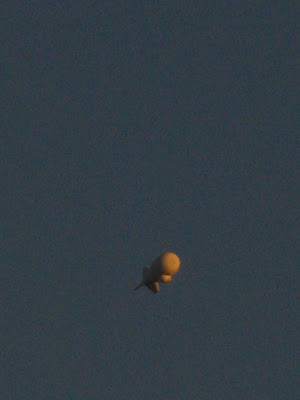 And finally we find ourselves back essentially where we started, with the sky on fire. 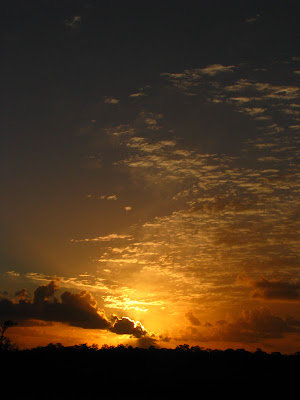 It's over all too soon, Cheyenne wants her breakfast, I want my bed and the sun has risen high enough the sky is pale and the sunlight is white and the morning magic has faded for at least another 24 hours.
Posted by Conchscooter at 11:01 AM 3 comments: Links to this post

I had reason to hunt through the archives of my blog, all 1847 essays only to discover I had never previously photographed Gecko Lane. Never let it be said I rejected Gecko Lane as unworthy because here it is: 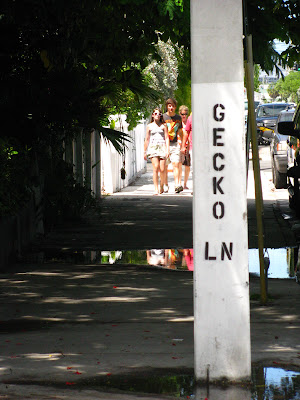 It's on the north side of Eaton Street, a main road into Old Town leading to Lower Duval, where the bars are. But Gecko Lane is a whole world away from Rick's and Irish Kevin's and Sloppy Joe's... 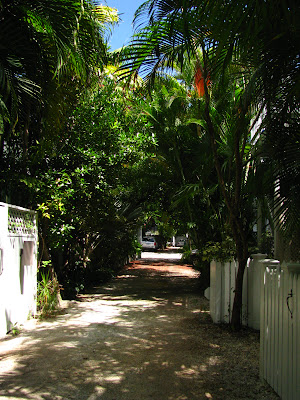 Usually when I check out these lanes and alleys in Key West I come across funky little bits of art work or designs, the sort of thing I would never think to have at my own home. But here I found mostly vegetation. 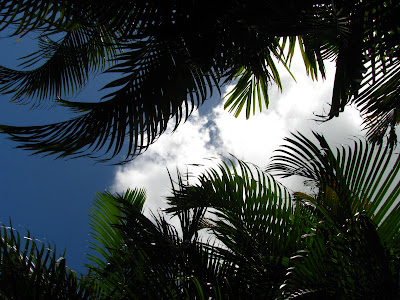 Imagine driving this alley in a Jeep, it barely seems wide enough. 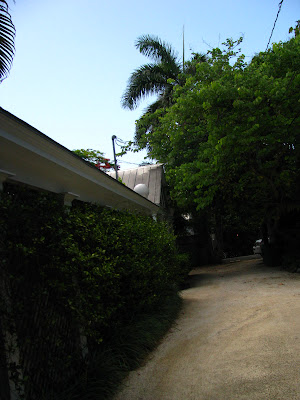 As far as a place to live this kind of alley might be ideal in the heart of Old Town, yet just off the beaten track. 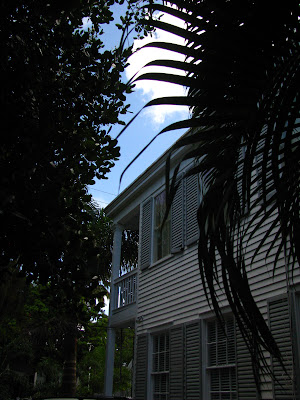 The abundant foliage made up for the lack of artistic knick knacks on Gecko Lane, a quiet corner of Old Town.
Posted by Conchscooter at 5:01 AM 5 comments: Links to this post

Cuba's symbol of liberation has his own corner of Key West at Bayview Park. And there he stands looking contemplatively at his island home across the water and I have to wonder what he might be thinking were he still alive.

Jose Marti is a somewhat mythical figure in the 21st century inasmuch he is claimed by all sides in Cuba's bizarre political mix of Communists and Capitalists, stay-at-homes and Gusanos worms in the lexicon of the The Party which teaches Cubans to hate the emigres of what it calls tHe Miami Mafia. And not without reason as the old timers in Miami are an angry bunch when it comes to modern Cuba.

You can see their point; they were the bosses before 1960 and Castro took it all from them and sixty years later they aren't over the pain of the loss and furthermore their loss has to be borne by everyone else through the mechanism of the abused embargo. Oh well, compared to Jose Matti our burdens are as nothing.

Marti was born in Havana in 1853 and spent his life advocating for independence from Spain, but at the same time he was no fan of the Monroe Doctrine and also pushed for independence from US hegemony in all of Latin America. He started his activism inn school and
was imprisoned at age 16 whee he suffered torture and confessed, as one does. Because his father was Spanish he was "repatriated" to Spain.

He spent much of his short life traveling and preaching revolution in Spain and Central America as well as Venezuela and the US. He spoke to cigar makers in Tampa and Key West where he arrived in1892. he died in battle in Cuba in 1895 and from then on he became the multiple purpose symbol of political struggle in Latin America.

The traits that Marti admired in the 19th century United States he knew seem quaint when viewed through our Tea Party steeped lens. He spoke of the way education was valued, as was the hard work of immigrants and thrift and industry of all Americans.

Marti actually suggested American democratic values be adopted in Latin America a suggestion that is rife with irony as we slip into extreme economic inequality even as Cuba herself trundles on struggling to figure out how to maintain a concept as outmoded as 21st century Communism.