Rolling south on Highway 29 from Alligator Alley I spotted a road sign to Copeland, a village of trailers that have apparently suffered some not so recent devastation. I wondered if it was possibly from Hurricane Wilma from distant 2005 but there were graffiti asking the Feds to please mind their own business (I'm paraphrasing here) and keep out of people's homes. 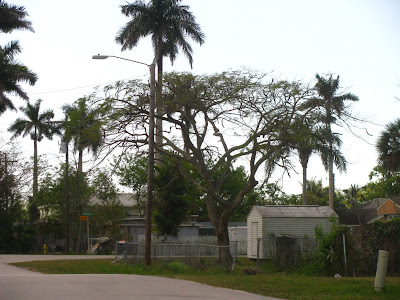 I saw people living in homes with hurricane shutters on the windows and it all looked terribly depressing. I came to Copeland about four years ago on a Vespa ride round the Everglades but that time I was busy checking out the nearby Turner River Road and I barely stopped in here. 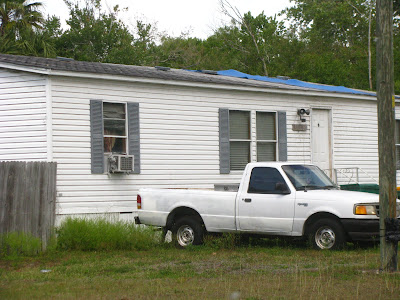 I wrote a ride report for Advrider: http://www.advrider.com/forums/showthread.php?t=236885&highlight=Vespa+Everglades about that trip in 2007 in June before I started this blog. I go tired of all the attitude on fora that i decided to carve out my own niche on the web in mid 2007. And now almost four years later I was back at this spot and ready to penetrate all the secrets of this place: 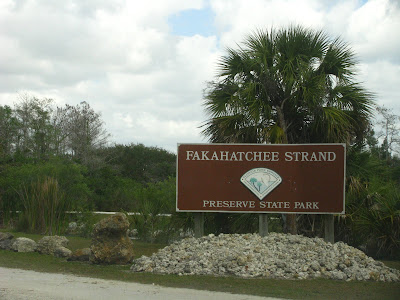 The signs promised an eleven mile dirt road through the preserve followed by more miles of the same dirt which is currently interrupted by construction before I could reach Naples on the other side. 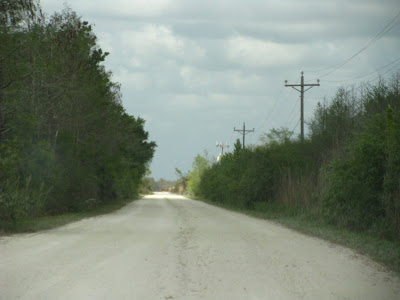 Cheyenne was not excited by the rumbling noise and lurching of the dirt road and I hadn't the heart to tell her we'd have to double back the way we came to get out. 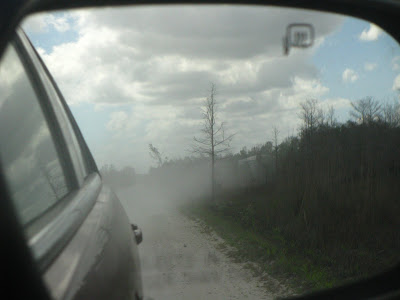 It was a glorious day, one more in a series we'd been having for weeks. 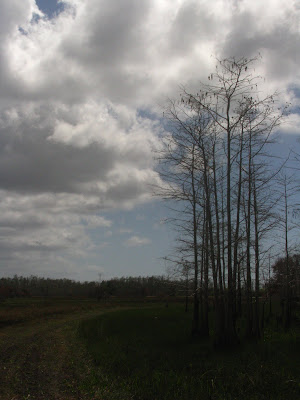 We stopped and Cheyenne took off across the grass. 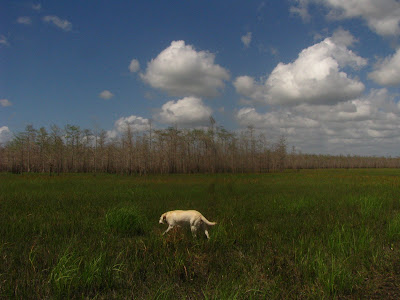 A flower, an orchid possibly but of course I am still not a botanist. 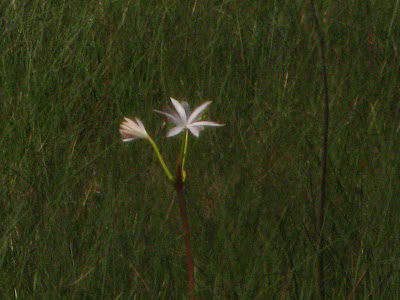 This, I later discovered was a bicycle tour operator towing bicycles in the trailer. 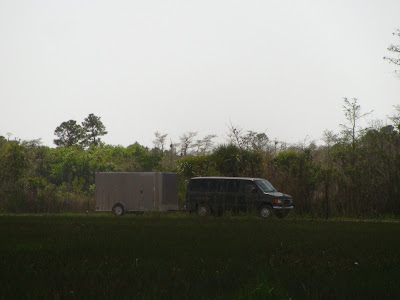 This diminutive animal looked quite like a Key Deer, bounding around and utterly ignored by my dog. 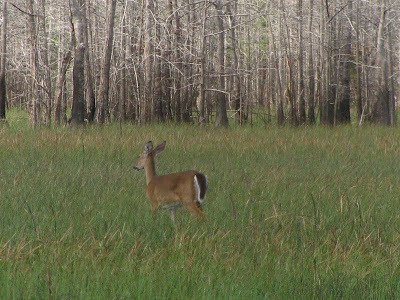 The road droned on feeling a lot longer than eleven miles and my car got progressively whiter with the dust. 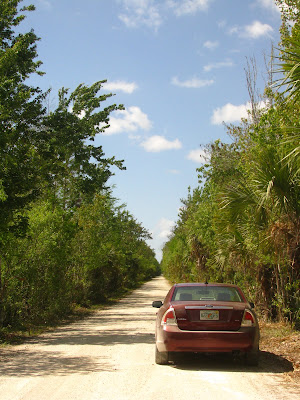 The road, narrow as it was, had frequent turn outs and several of those had intriguing looking trails wandering off through the woods. We did a bit of checking out together much to Cheyenne's delight. 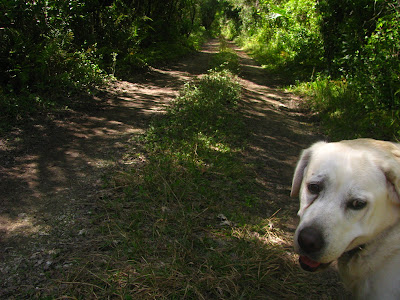 These watery woods were more like what most people expect to see in the Everglades... 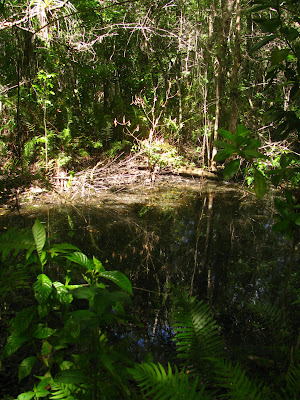 ...and Cheyenne took advantage to cool off and have a refreshing drink in a small running stream. I was rather concerned about alligators so I kept a rather closer eye on her and limited her wandering, more than I usually do in the Keys. 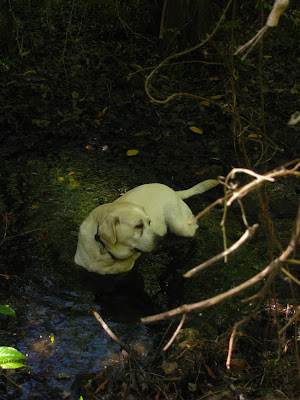 There was no pedestrian crossing marked but the bird behaved more like an annoying high school student dawdling in the crosswalk. 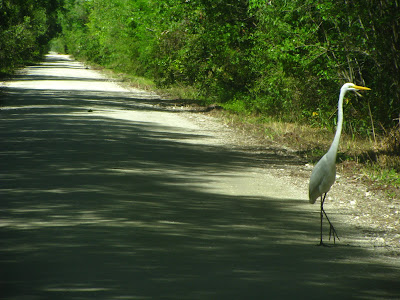 For some reason I swerved to avoid a stick in the roadway, and when I looked back in the mirror I noticed the stick was all coiled up, pissed off, as though suddenly awakened from a deep slumber. I backed up to take a picture: 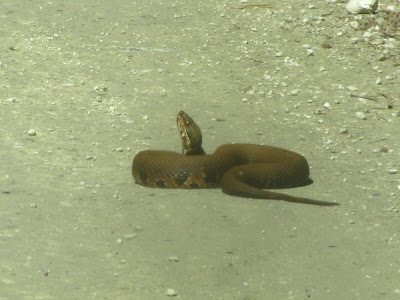 I have no idea what make or model it was but I didn't get out of the car and off it went into the brush. Eventually the eleven miles came to an end and we broke out into a new preserve. 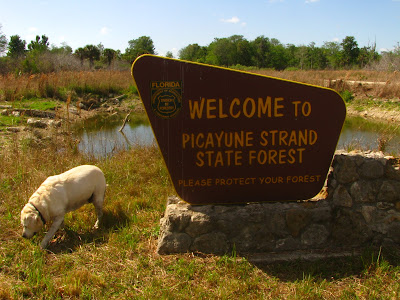 This place has been in the news lately as our new idiot governor wants to stop rejuvenation work in this section of the Everglades, work that has closed the road heading west for several more weeks. In the bad old days canals restricted the flow of water drying up the Everglades and now that work has to be undone to get the flow going again, flow that filters the water before it ends up in Florida Bay to the south. 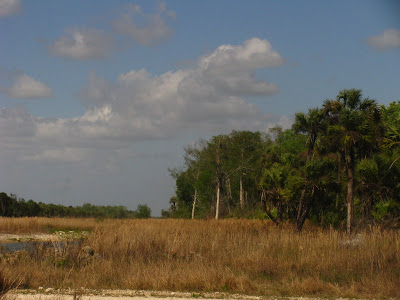 Florida's wilderness never ceases to amaze me, blue skies, winds whistling and whole stands of trees bending to the breeze. The silence was perfect. 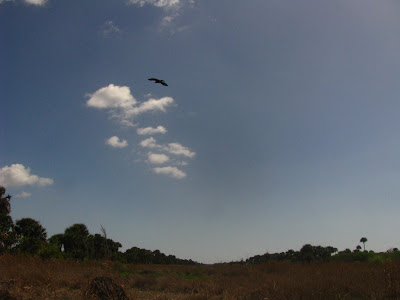 Cheyenne pottered about happily, coming and going on those weird missions only dogs understand. 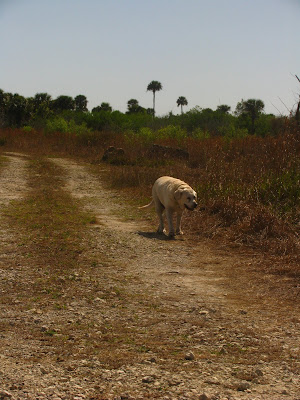 The signage was as bad as a home owner's front yard in Key west, notices all over the place and not many making much sense: 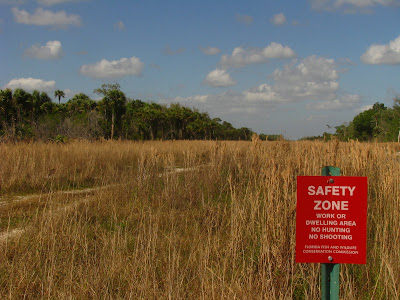 Here's a road map to show where I was. The dirt road comes out somewhere near where "Naples Manor" is written on the map. My only option was to turn round and drive back eleven miles to Copeland as a barrier was across the road closure. 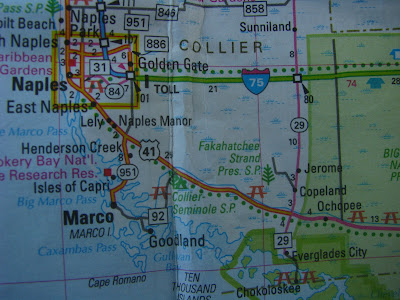 Back at the entrance to the park we stopped by some old gravel pits filled with water. I played with the camera while Cheyenne took one last wander. 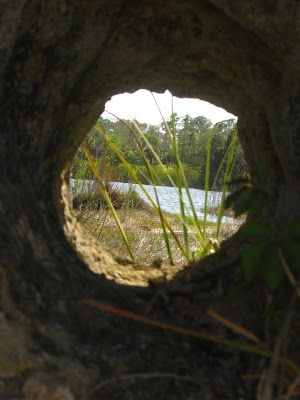 It would have been a pretty spot had we had a picnic. 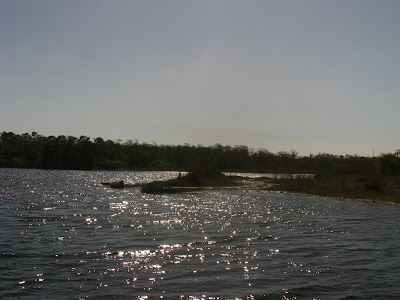 Then it was on to Highway 41, the Tamiami Trail, the original early 20th century road across the Everglades. I find it much more fun to drive than Alligator Alley, even though the speed limit is 60 in Collier County and a modest 55 in Dade. Motorcycles don't help either as they seem to be ridden by people barely interested in moving at all. 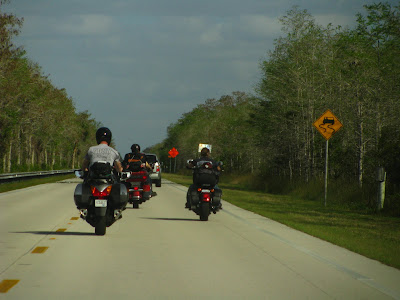 The frequent Indian villages are a nice speed trap as the limit there drops to 45. I got a ticket here a decade ago after a Highway patrol car followed me at four in the morning blasting through the zones at 60 miles per hour. Nose bleed speeds, I'm sure. Then it was back to the Keys via Card Sound Road and the seventy foot tall bridge giving a view across the northernmost mangrove islands: 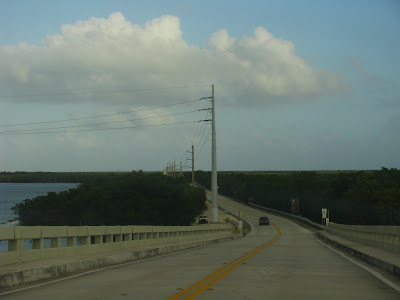 In Key Largo I went through a gas station car wash to get rid of the white dust and Cheyenne was quite startled by the process: 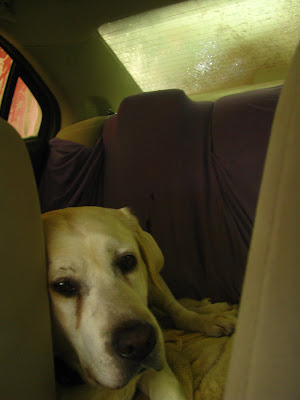 From there we rode the Overseas Highway into the night getting home at 7:30, thirteen and a half hours after we left. 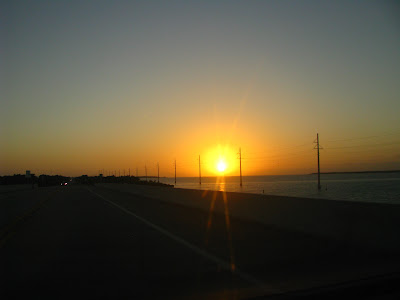 It was as tiring as riding a motorcycle, so after a glass of wine and dinner I was ready for bed. I had scratched the itch to see the mainland and for a while at least the Everglades won't call me back.
Posted by Conchscooter at 12:00 AM 3 comments: