A night off work often leads to an early morning in town walk for Cheyenne if I wake up before the sun. I got lots of pictures as I trailed around behind my eager dog, and they will show up here in the fullness of time. Starting with a rising sun on Mickens Lane, a right angled alley between Angela and Whitehead Streets. 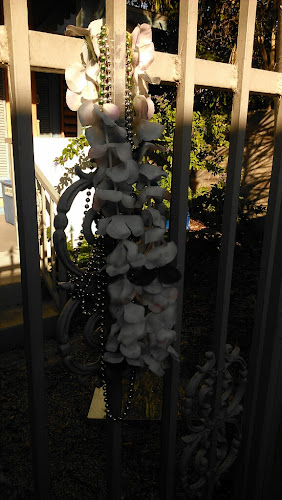 The modern obsession with hydration leaves me puzzled, for instance when did thirst become a need to 'hydrate?' Indeed I can frequently be found hundreds of yards from potable water with not even one plastic bottle of commercial water about my person, and I may even drive home feeling thirsty. I carry water for herself in the trunk but on our walks we end up relying on the kindness of strangers, like this bowl outside the Green Parrot under some street art. david wegman's art and painting.
. 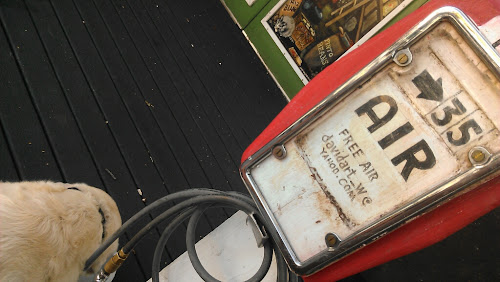 Some people hydrate by sitting at a bar all afternoon despite the warning that alcohol kills cells and dehydrates the body. It also can lead to some really stupid behavior like walking onto a strangers porch, hammering on the door and then proceeding to take a leak under the gaze of the astonished visitor to Key West renting a cottage for a peaceful vacation. Sometimes a well hydrated driver will go off the rails, like the ick up truck driver who missed the intersection the other night and hit a palm tree and a house instead. I kid you not, there was a hole in the house on Eaton Street to prove it. The driver slept it off at the jail and will end up paying thousands for drinking and driving after conviction. The good news is that alcohol brings money to town and employs people to clean up after the booze has been poured. 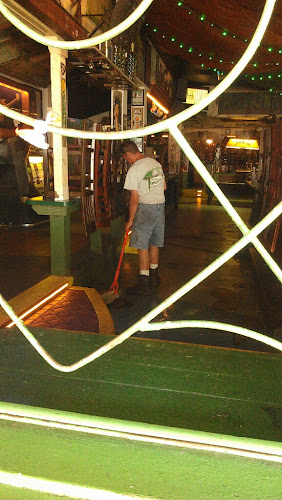 I've been riding motorcycles since 1970 and I have come to loathe drunk drivers for their unpredictability and weird aggressive behavior. I met another one last night riding home at two in the morning. The car came up behind me at speed on the highway, high beams blazing, and I pulled off to let them by. That they had no tail lights at all was a bonus act of stupidity but after passing me they slowed down, typical for drunks behind the wheel struggling to find their way in the dark. For a while the car slowly straddled the yellow lines then at Baby's Coffee they sped up madly and even though I was doing sixty in the fifty five they disappeared far into the distance even as the speed limit dropped to forty five and I dropped back while they disappeared up ahead. I fully expected to come across them doing field sobriety checks up the road but they were nowhere to be seen when I turned off up my street. That far they had got away with it, as had any unsuspecting unfortunates whose path they crossed and who they did not kill in a weaving head on. 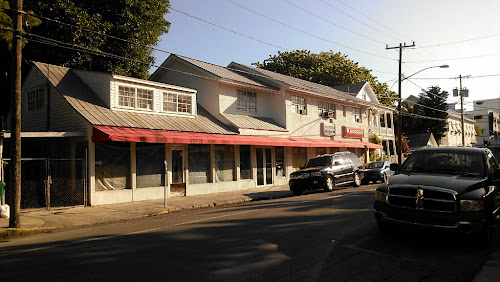 The former motorcycle dealership shown above on Southard Street has moved to White Street. Motorcycles crowded the parking on this block of Southard much to the irritation of some vocal neighbors, and now the building s shuttered up and cars have returned to the on street parking. Neighbors at the White Street location have been telling he newspaper the motorcycle shop has cleaned up a formerly blighted spot! Change can be good. 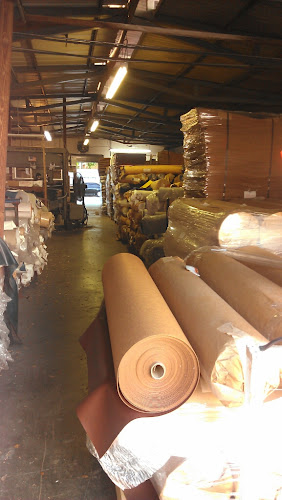 There are so many odd little corners of Key West that go unseen and unnoticed in the rush to serve the tourists. Above - carpets for sale? Below, an empty early morning street reflected in the windows of one more store that will likely be busy later in the day. 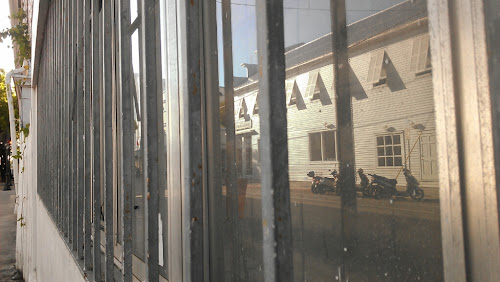 The Strand, now a pharmacy once a theater is also abandoned by people. You have to be on Duval fairly early to see the five hundred block this deserted. 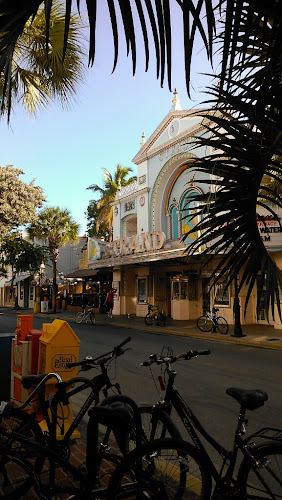 It's the five hundredth anniversary of the arrival of white people in Florida, the flowery state, the Spaniards called it, and much of he state is celebrating. Key West has a hard time celebrating history, last year's centennial of the arrival of the railroad passed almost unnoticed and this year five hundred years of Florida settlement merits little flags draped off street lamps. This town, chartered in 1828, is very focused on the present, not the past. 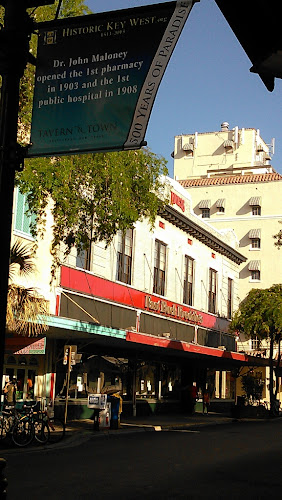 By the time I steered Cheyenne back to the car on Olivia people were starting to appear on the street. This guy strode past me in shoes of a shade of electric blue that they eclipsed my pink Crocs. 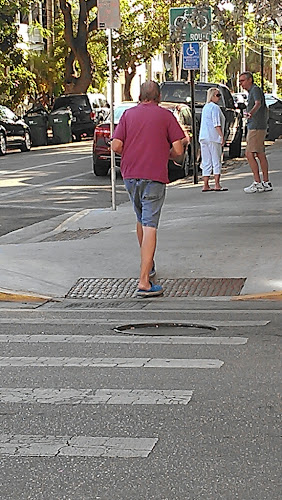 I am no longer alone as Cheyenne takes her next pause on Angela at the corner of Duval. 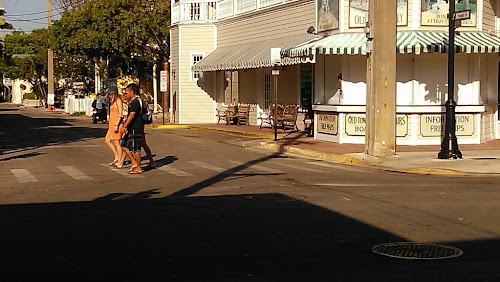 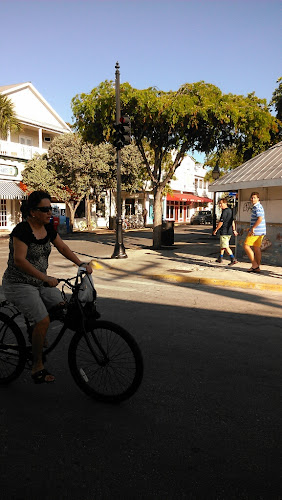 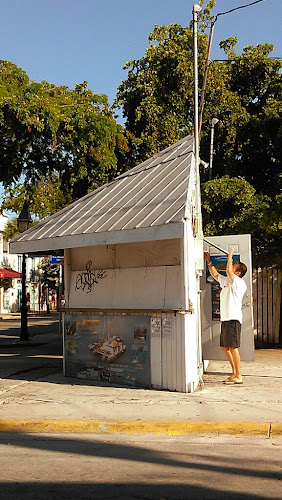 The weird shaped shed is actually a ticket booth for tour boats and the day's occupant was setting up shop. Peop,e think I have a high stress job answering police phones but I can't imagine sending all day answering questions and selling tickets like that. It remains a source of amazement to me that I landed the job I did when I did. Cheyenne's job in retirement is to check out absolutely every single thing everywhere. 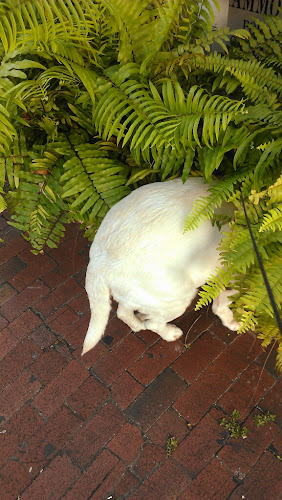 She spent her first eight years producing puppies and being kept in her rather uncomfortable place in the home of some freaks that dumped her for the crime of being too old. Nowadays she gets her daily walk where she sets the pace and the direction. It is hard work and she had to stop off for a drink at the 801. That is to say she stopped to hydrate. 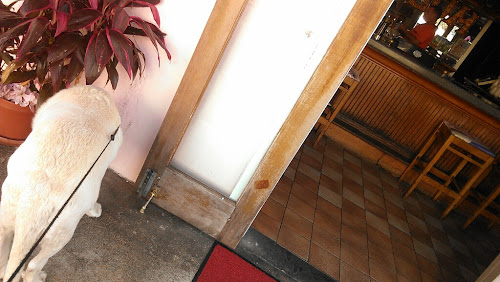 And then she stopped for a final rest on this lengthy walk on the sidewalk between the car and the Hemingway House wall. She likes to end her walks with a pause to people watch. I get the feeling she never got to spend much time just watching the world in her former life. These days when not sleeping she likes to sit on the porch and watch the boats on the canal at home. 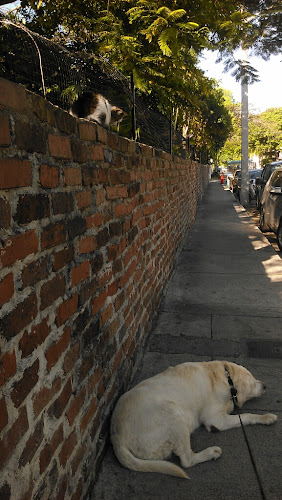 I don't think she noticed the rather anxious Hemingway cat perched on the wall. The cat sure noticed her. 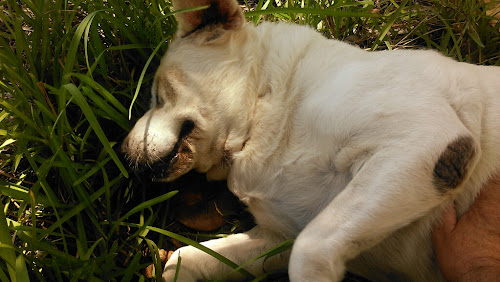 Back home she passed out snoring on her grass bed. It must have been a good walk.

Posted with Blogsy
Posted by Conchscooter at 7:30 AM 6 comments: