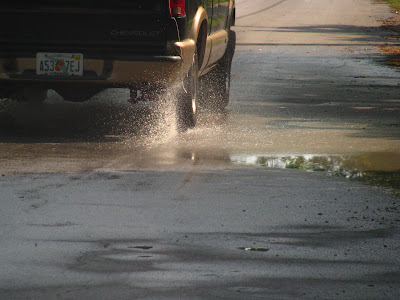 They did insist it rained in Key West and it must have done, the evidence was there in the street as I rode through New Town. The air was clear of dust and the light was crisp and extra bright. I liked the look of the city refreshed by rain. 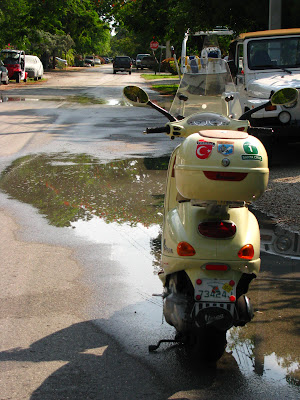 We are told temperatures are higher than they should be for the time of year and of course the drought continues unabated but it was lovely to see water lying on the ground evidence that we have not been completely forgotten by the seasons. 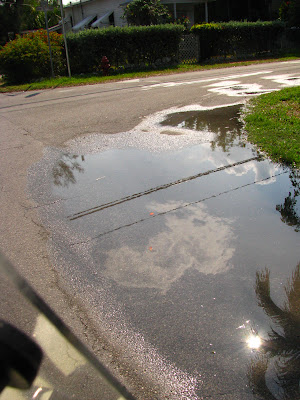 I feel bad for the mid westerners madly sandbagging their cities against swollen rivers, and the bayou residents in Louisiana losing their homes to planned flooding, while in the Pacific Northwest rain won't stop, but let me say we sure could use some of that water in our parched islands.
Posted by Conchscooter at 9:01 PM No comments: Links to this post

To ride a bicycle through Old Town is a fine and splendid thing but to ride a scooter may be even better, especially I hasten to add, a properly muffled four stroke like my wife's Vespa. As seen on the back of a shiny car. 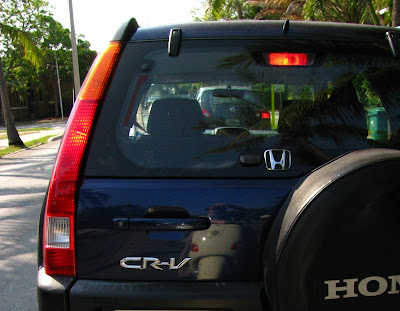 A two wheeler is easy to park and I chose a spot near the library whence to stroll. I wondered at this elaborate number holder, hints of a past life perhaps. 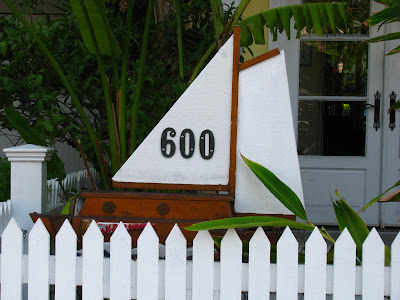 For all that I like to live outside the city itself there is sheer de;light in strolling the streets and lanes as a visitor. I cannot recall who it was that mentioned to me a meeting with visitors who had been coming to Key West for a dozen years and they had seen none of the city than Duval Street.What a waste. 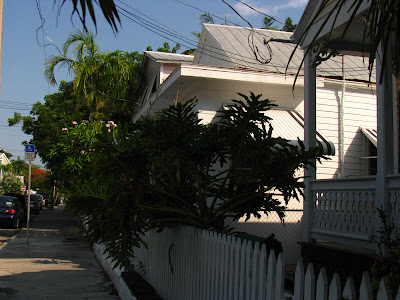 There is of course always the vexing issue of parking. I was delighted to spot this vehicle in a handicap spot with the proper documentation of course but what a dork! Not even close! 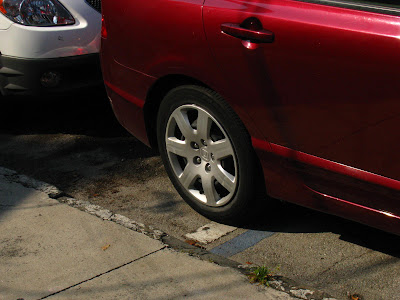 It is said the words Jesus Christ, Son of God, Savior spell out, when taking the first letter of each word, the word fish in Greek which is why modern American Christians adopt the fish outline for their symbol (!). So naturally one has to wonder what this ancient notation from the oppressed in Rome was doing as a public mosaic in Key West.

Most likely nothing but it attracted my camera in pursuit of the whimsical nature of life. So much effort to create meaning and order when none seems to exist. Someone lays out some pretty pieces of tile and I start thinking of catacombs. I think too much.
Posted by Conchscooter at 5:01 PM No comments: Links to this post

Next year will be the centenary of the arrival in Key West of Flagler's East Coast Extension. The Art and History Museum on Front Street in the Customs House has (or had) a newspaper on display from the time noting that some people opposed the arrival of the railroad in town, fearing it would upset the nature and balance of Key West's isolation. 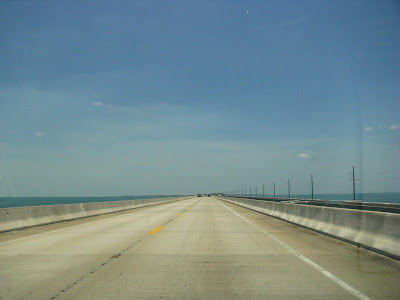 They weren't wrong. the railroad opened up the other islands in the chain to human development and the few hardy pioneers who had lived in the wild, communicating rarely by boat, were suddenly transformed into whistle stops by the arrival of the railway. Indeed until the railroad came through many of these specks of land were essentially unknown to the outside world and were named by the railway workers, frequently in honor of their home states. 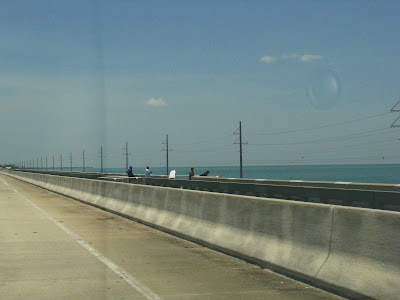 When the railroad, never a money maker, was knocked out by the great storm of 1935 the railroad basically gave up and Key West went back to splendid isolation which must have been a problem for the people living along the railroad line and dependant on it for trade. 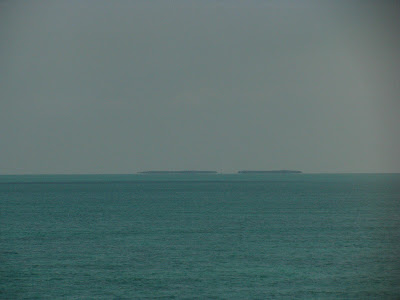 The state of Florida stepped in (imagine them having the vision to that today!) and turned the railroad into a highway, albeit a modest and rather slow one. The views were all the same though and in 1938 Key West was accessible by car without the use of ferries as had been the case previously. Things stayed the same until 1982 when the new decent highway was opened and a five hour trip to Homestead was reduced by half. 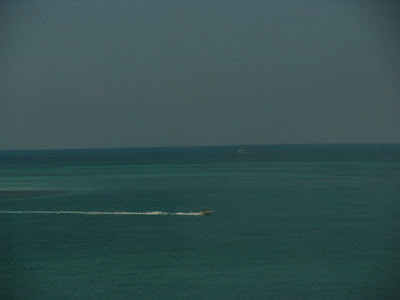 Whether or not that was a good thing depends on your point of view. For my part I like the "new" highway but I enjoy the ride. 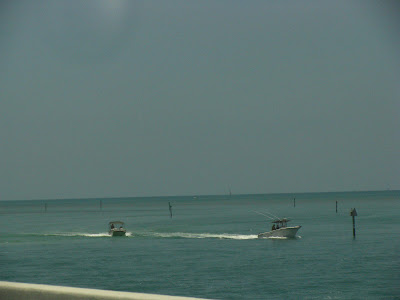 No doubt there will be a frenzy of reminiscence the closer we get to the centennial of that first train arrival in January 1912, but I have a tendency to think about it every time I drive the rails to and from Key West.
Posted by Conchscooter at 11:01 AM No comments: Links to this post

I think it was on this stretch of low lying roadway that Hurricane Wilma covered in sand in 2005 and the national Guard had to bull doze their way through to bring us ice and Chef Boyardee. 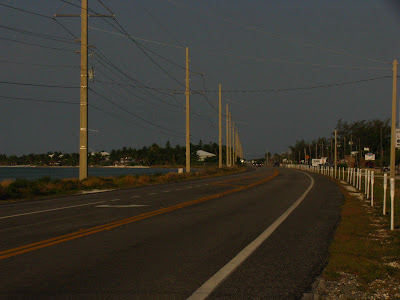 That was the storm that showed Governor Jeb Bush had learned the lessons of Katrina and help was on hand immediately and dispatched almost before we knew we needed it. It was kind of weird lining up for hand outs from the Army feeling like a Bosniack under siege but all was well in the end. These days you wouldn't spare a thought for all that sand-in-the-road drama, the place looks that peaceful. 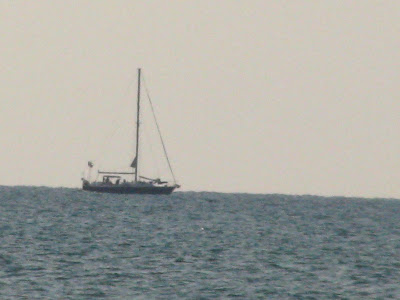 I always find the curve of the southern coastline very evocative with the tree covered point. 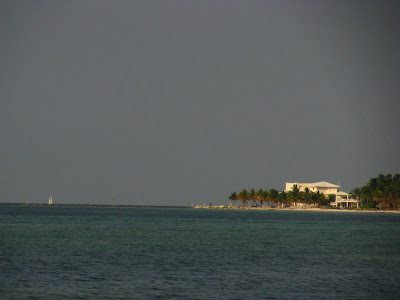 The tide was high when I stopped so the beach was a vestigial affair, but even at low tide there's not a lot of land around here. 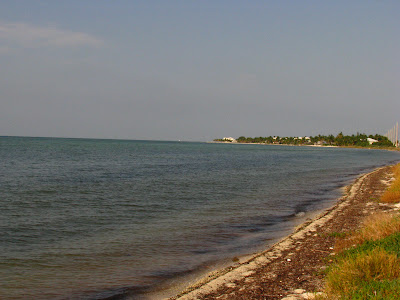 The road is straight and true through here with convenient dotted lines so one can get past the visitors slowing to ogle the South Pacific views. 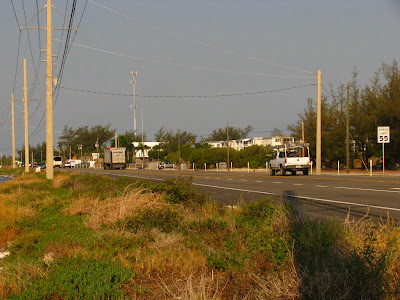 It was morning when I took these pictures and the view to the east toward Islamorada were dappled by the sun. 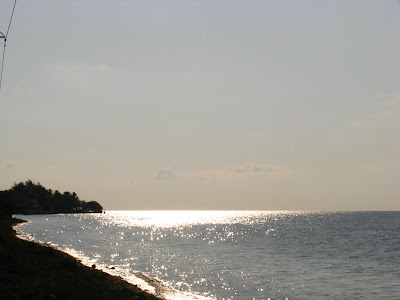 The side streets here are pretty much like most such dead ends in the Keys, stilt homes and trees. 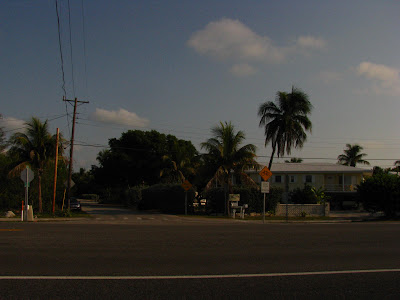 The bike path though is a bit better landscaped than the blasted heath cyclists ride through on most of the Lower Keys. 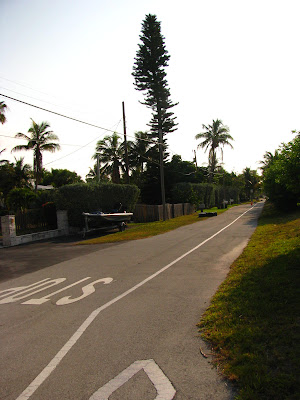 One local home and tree owner was showing some enterprise. I wonder if I should do a similar thing, offering some of the hundreds of nuts I get on my mature trees. I really don't think I can be bothered, and I shall continue to eat and drink as many as I can. I wonder if people really do pay fifty cents for what is essentially a non native nuisance? 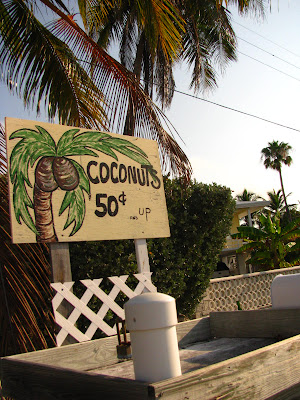 I took a coconut to Italy on my last trip in 2009 and Giovanni's wife, herself a gardener, thought it was the weirdest thing she'd ever seen, not having handled a coconut with it's out shell on. I suppose it's all what you are used to.
Posted by Conchscooter at 5:01 AM No comments: Links to this post

I was blowing along Highway One in the car looking for things to photograph and coming up short. I liked the city entrance sign at the north end of Marathon, which is actually something like what Key West could have done if they had actually wanted people to know where the city is. The Key West sign was delegated to the Rotary and they did their best but the city stuck the sign in a jumble of road signs unlike Marathon's proud and visible notice of arrival: 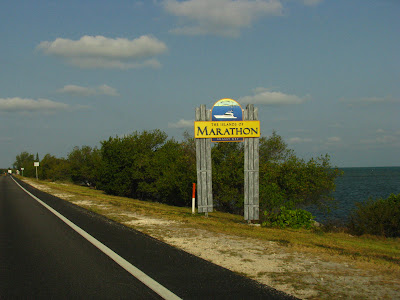 Then I was back on the Seven Mile Bridge with the road entirely to myself which was delightful. Summer driving in the Keys should be like this all the time but these days tourist season seems to be spreading across the whole year and I have been amazed by the number of cars I keep seeing buzzing around everywhere. 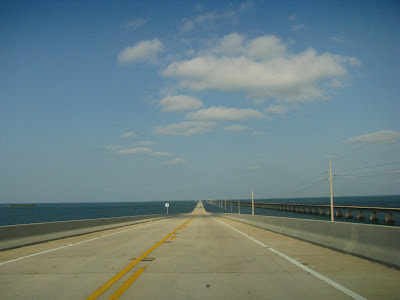 And then I suddenly remembered what I was fated to do this day. The tree! It's on the old Flagler Bridge closer to the south end of the bridge and it's been growing for a while. I have never yet got it together to snatch a picture, such is the haphazard nature of my photography, sometimes. 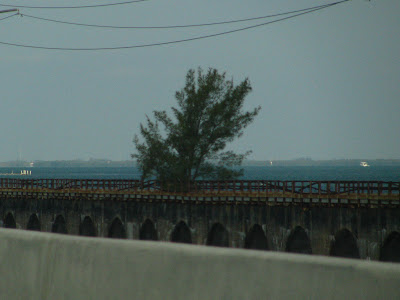 Australian pines, also known as casuarinas are not native trees and they propagate by spreading their roots so they are not generally very welcome in the Keys. This one is rather amazing considering it has made it's home in the cement miles from the nearest scrap of dirt... 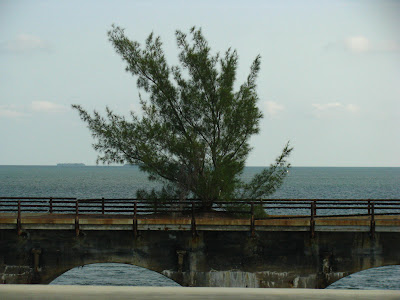 The other thing is that the tree is growing on a technically inaccessible piece of the old bridge, far beyond the Pigeon Key turn off which is where the walking portion of the bridge terminates from Marathon. The fishing pier that sticks out from the southern end of the old bridge doesn't get anywhere near the tree either. 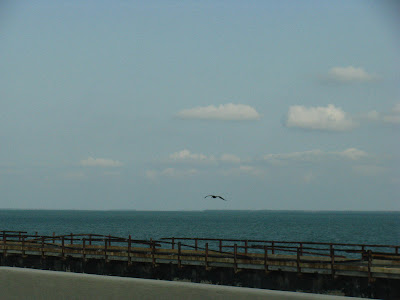 I wonder how tall they'll let it grow before some killjoy decides it's gone too far and it has to be cut down. I'll be watching.
Posted by Conchscooter at 12:01 AM No comments: Links to this post