From The Archives: Nicaragua 2009 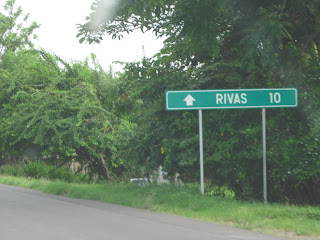 I was mulling over a bunch of photographs my wife took on her vacation in Nicaragua and I thought she took some street scenes that might be of interest. Nicaragua is a rated as the second poorest nation in the western hemisphere, wedged between Haiti at the bottom of the list and Honduras one step above Nicaragua. So street scenes here have a flavor that tends to be quite different from suburbia USA. Not all people have actual wheels to get around so they end up walking. When my wife and I were sailing down Nicaragua's Pacific Coast a decade ago we walked a ton too, though not usually with a load on our heads: 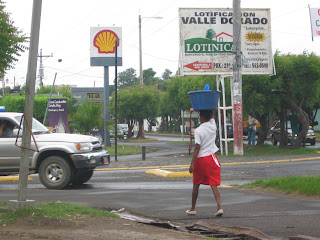 The US influence is obvious on the streets, the yellow lane paint, the green road signs and the fact gas is sold by the galon, not the liter. A new sight on the roads that caught my wife's eye were these Bajaj three wheeler taxis, based on the Italian Ape of years past: 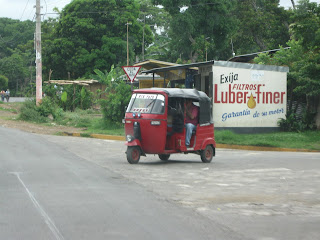 The more traditional cab is a multi-purpose pick up truck hauling people and stuff, and they don't spare the weight as economy is critical when you live in the second poorest nation in the hemisphere: 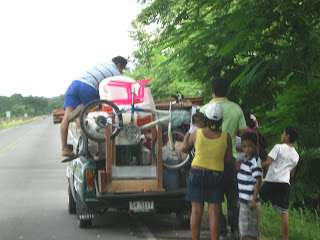 Nicaragua is fixed in the average American mind, if there is any consciousness about the place at all, as the place where the Sandinista revolution took over the government 20 years ago and President Reagan instituted a Counter Revolutionary War to win back the country for capitalism. 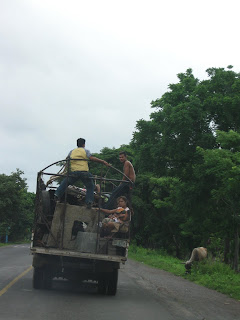 Those days are long past and Nicaragua has been at peace long enough it's difficult for an outsider to see any signs of that civil war. Nowadays it's a matter of working long enough and hard enough to make ends meet. The Danish government built some pretty decent roads across the country more than a decade ago and they are still there. The trick was the Danes sent their own engineers to Nicaragua to see that the money was spent on the actual project so the main roads are really quite excellent: 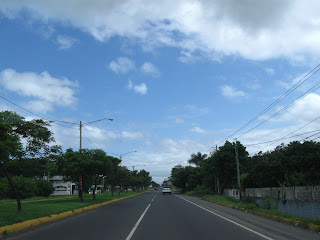 Earning a living is tough when there isn't work and Nicaraguans have to be adaptable and tough to try to figure out how to earn some cordobas, (20 to the dollar, roughly). Imagine earning minimum wage standing out in the sun all day doing cleaning windshields rather than take charity: 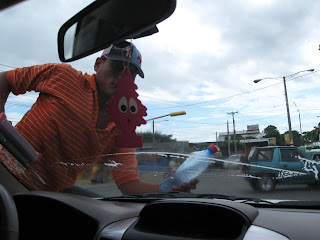 I find the anti-immigrant rants in the US to be extraordinarily uninformed. Granted these people who seek to make some money in the US don't have papers, but they don't come to the US for charity either. These are people that work: 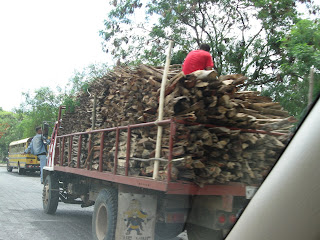 One aspect of Nicaragua that always intrigued me was the legacy of Sandinismo, the leftist ideology that left behind a series of social reforms that make Nicaragua one of the more progressive peasant societies in Central America. It's modest stuff, regulated hours and conditions on the job with some protections against arbitrary firing, but it's revolutionary in this part of the world. 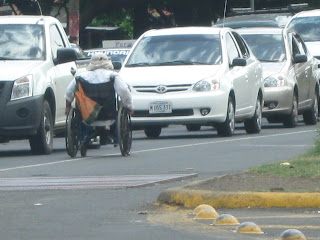 The World Bank has figured out that Nicaragua has the 14th most "free "economy of 29 in the Americas and is almost 70% "free" which I suppose means capitalist. And there they are out there beavering away as best they can: 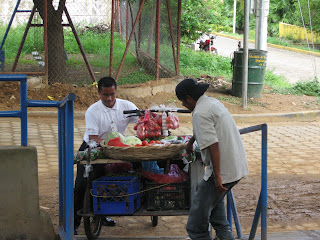 It would be hard to imagine threading one's way through this sort of rush hour traffic on a motorcycle if you were used to the orderly flow of North American streets: 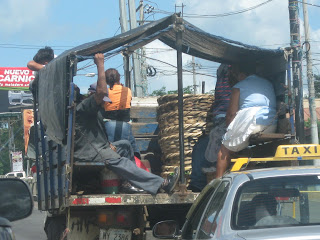 And even though it looks romantic, a horse and buggy isn't the most efficient way to travel, unless of course you can't afford the cost of gas: 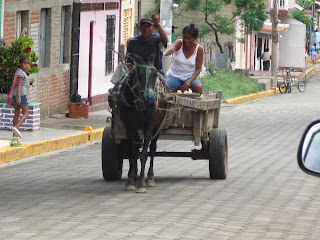 In Key West pedi-cabs are a tourist attraction, in the provincial capital of Rivas they are actual taxis: 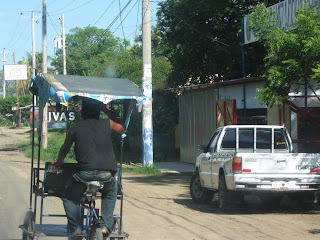 And where would be without a picture of the local fuzz? If stimulus money doesn't stimulate I wonder how long it will be before Key West officers are "protecting and serving paradise" with less than pristine cars? It seems we are all a recession away from being on the ropes, so one can only imagine what local government budgets look like down there: 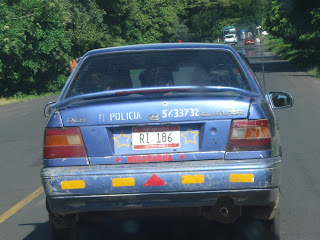 And there's another Bajaj doing sterling work hauling people and their chattels: 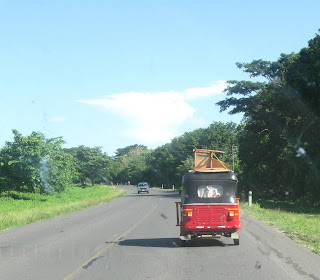 A one horsepower cab: 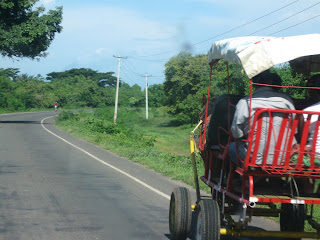 A one horsepower pick up: 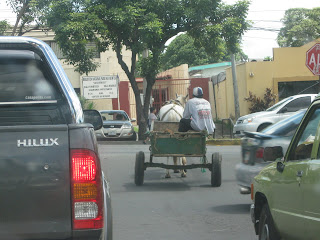 One feature of street life in Nicaragua (and other Latin American countries) are these gruesome noise pollution devices. They trundle around town advertising in loud horribly distorted voices, or alternatively they can be hired to announce political races or new city ordinances and the like. 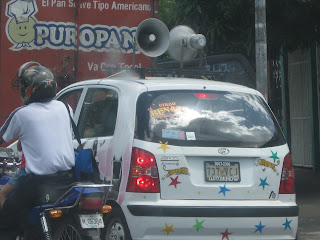 And yes these countries do have helmet laws, though brain surgery here would be a bargain compared to getting the noggin reassembled stateside. And before you sneer at the level of private medical care in these countries remember the doctors here trained in the US and Europe and nursing care is amazingly affordable. Rely on Key West Diary to waggle your stereotypes. 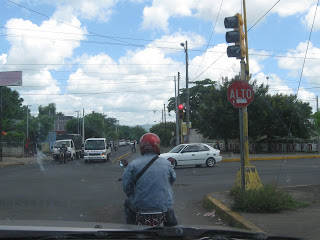 I've driven in all these countries at one time or another and I've found traffic to be no worse than anyplace else. It's a matter mostly of getting in the flow and remembering the basic right-of-way rule in all developing countries: whoever has the biggest wheels gets to go first. And whatever you do, don't get in a wreck because then your worst stereotypes will all come true!

Allen Madding said...
The last two pictures include scooters - the first has two up riders. one would think the cheaper 50cc scooters would thrive in this society.

I am warmed that they embrace the pedicab. Some where in Nicaragua is your compatriot who is contemplating launching a blog, recommending sites to see, places to stay, places to eat, and providing pedal-cab tours of the countryside. I wish him great entrepreneurial success.

I am confused. Looking at the map. I cannot find Nicaragua Key. While I see many things that remind me of Key West in these pictures (i.e. battered and aged scooters ripe for Sargeant Pepper-type paiting and neighborhoods and lifestock in the streets), everyone does seem to emp[loyed in doing something useful. Is this another kind of bizarro Key West festival?

Also, yesterday's blog seemed to contain a note from your wife, who is under the impression you are "funny." Can you chect to see if she meant "humorous" or "peculiar." (I'm running a pool with several other posters and I'd like to collect soon.)

And congratulations on your new tour operation. Will it include the nude beach? (Bob Skoot was too shy to ask.)

It seems that the A.S.S./F.I.S.T. collaboration wasn't as smooth as we had all hoped, though we're working towards the same end (namely the nude beach and "boobs and bugs"--copyright Jeffrey).

We expect that investors will help to lubricate the process, however, we may be forced to focus our attention elsewhere.

We have an attache communicating as we speak with the Nicaraguan Institute for Protected Serendipity (N.I.P.S.). We hope to clamp them down to an answer by the end of the month.. As always, I'll keep you all posted....
Sunday, August 2, 2009 at 7:02:00 PM EDT

I would just love to have a Bajaj, or an Ape, or a Tuk Tuk but they don't allow them here. Our Government has something against 3 wheeled vehicles. Now that Chrysler has been bought by Fiat, perhaps there will be a Topolino or Fiat 500 in my future

Conchscooter said...
My wife is losing her, mind: she thinks you lot are funny. We're on a road trip and I think the stress of being trapped for days in a car with me is causing her to lose her mind. Someone explain to riepe where Nicaragua is, else he too will go mad. Writing on an iPhone is exhausting.
Sunday, August 2, 2009 at 11:30:00 PM EDT