The term "cold front" has different connotations depending where you live. Around here a gentle north breeze, temperatures in the mid 70s and no humidity indicate an end of winter cold front that is quite delightful. 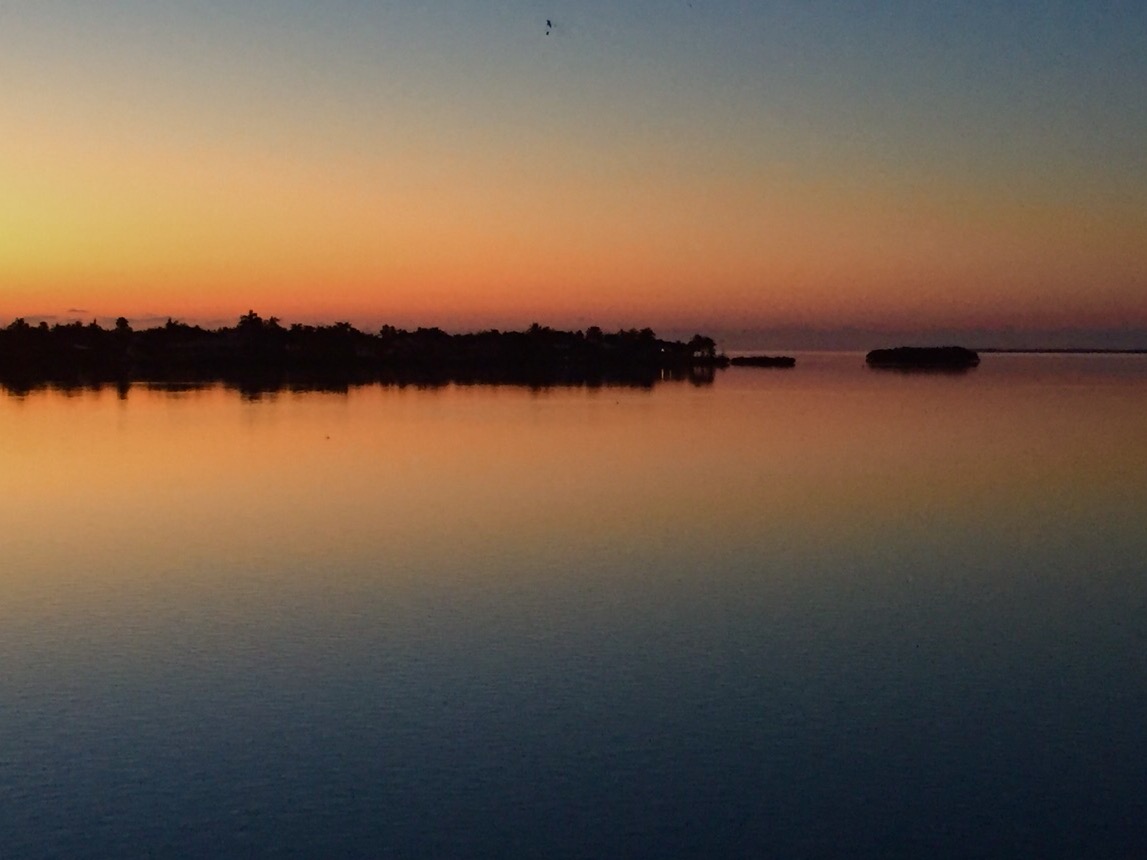 I had hoped it was cool enough that my dog might be energized but in  her new slower paced old age we walked half the bridge and went home to sleep. I had some homework to do so after lunch I worked and she napped because a girl can get tired after a morning spent sleeping. 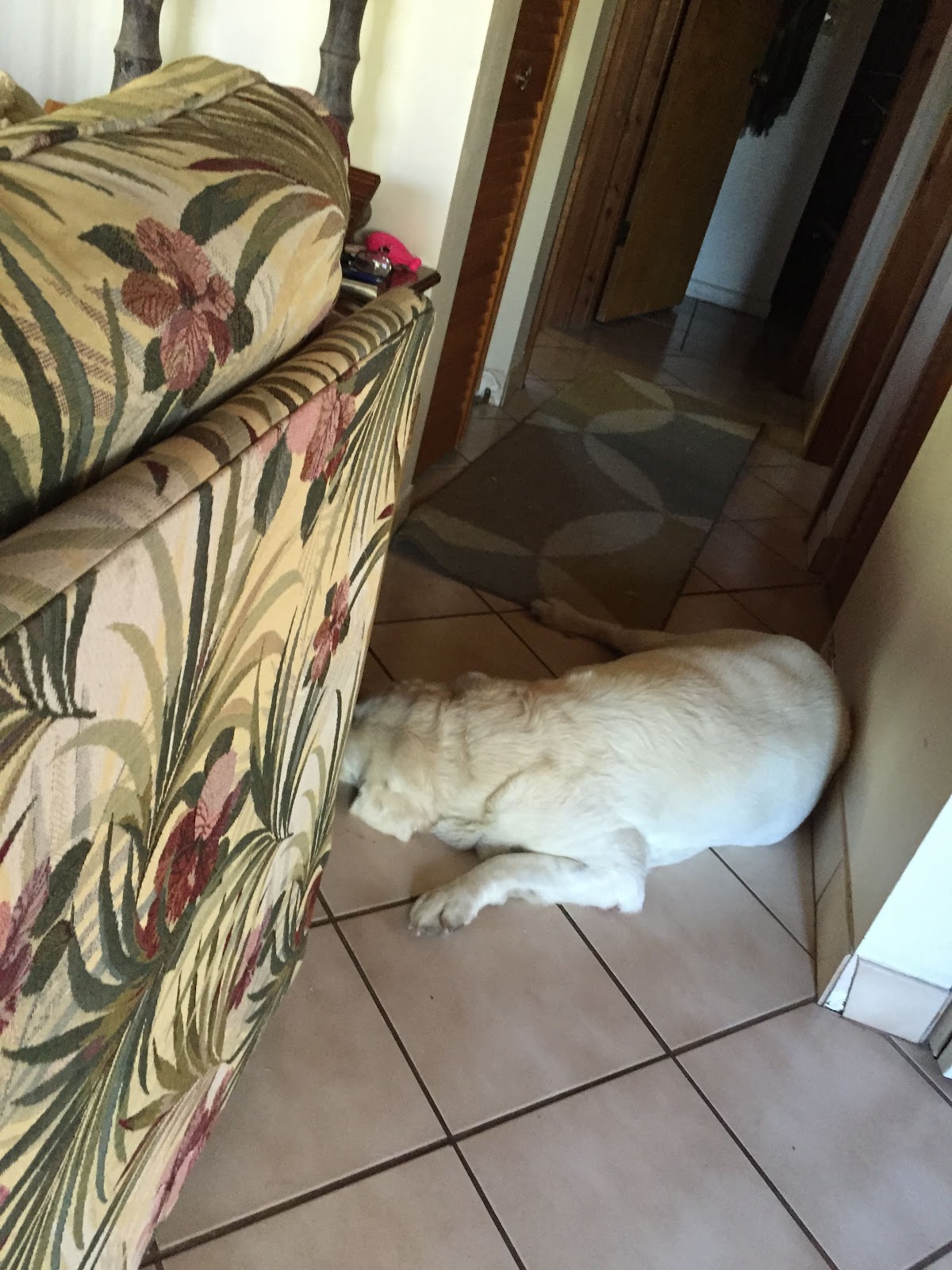 She was ready to jump up when I called her out for a walk and she trotted downstairs and stood expectantly next to the car. I found myself in the same position, expectant on the No Name Bridge which is getting some cement repairs. Of all the thousands of bridges around the country that need maintenance this bridge to almost nowhere is getting an elaborate make over for which I am grateful. I also enjoyed observing the dunderheaded behavior of one more over sized pick up driver. The sign says "keep left" which on my planet is an indication that after the light goes green you take the left lane, the one unencumbered by large obvious cones. This bright spark decided to block the oncoming lane as he waited for the light to change. Luckily no one approached and his knuckleheaded nonsense had no consequences. 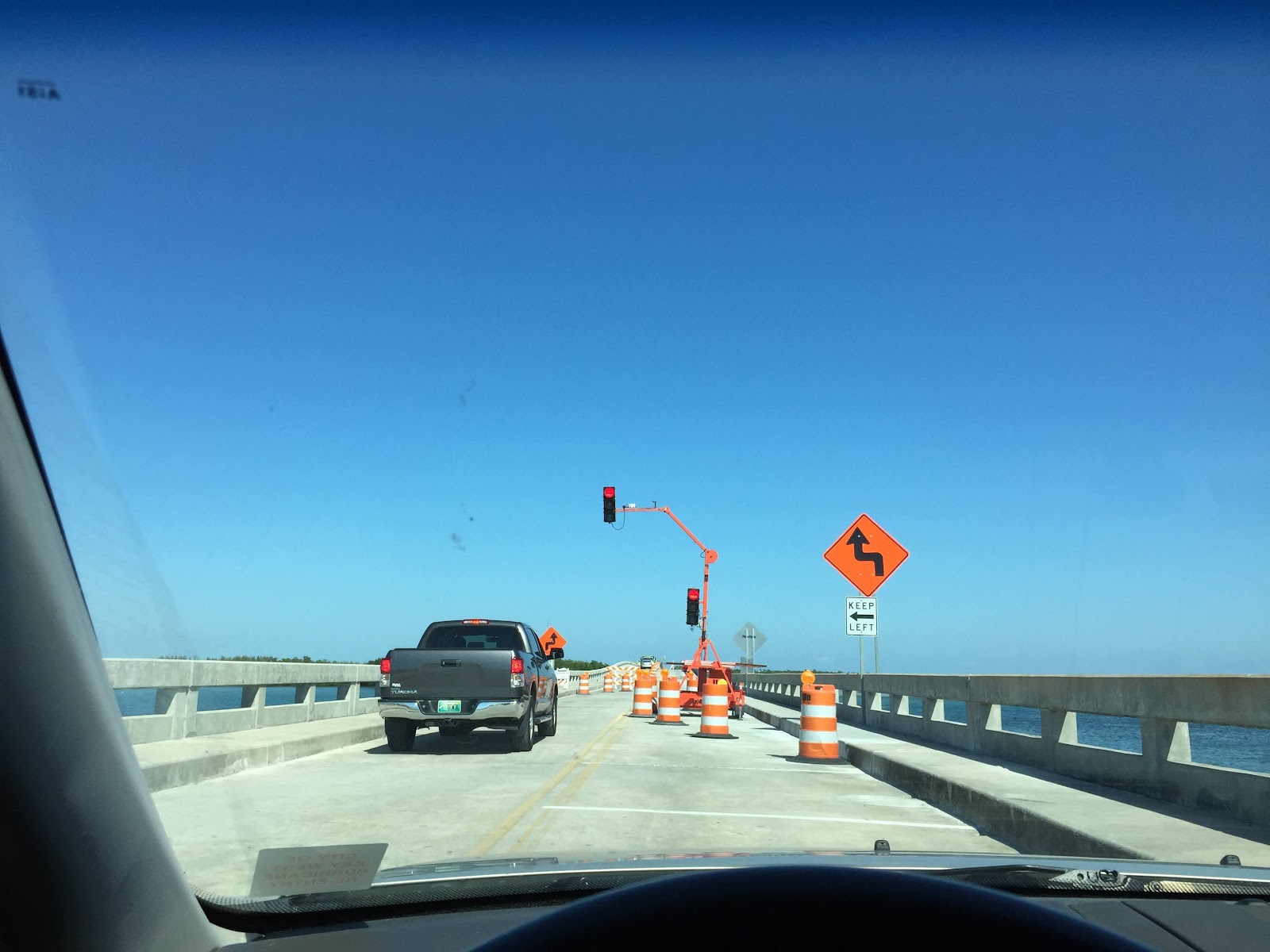 Cheyenne likes this walk on No Name Key but I doubt we will be back until the rains return because she went hunting for drinking water and found none at her dried up pool and she came back through the woods muddy and disappointed. 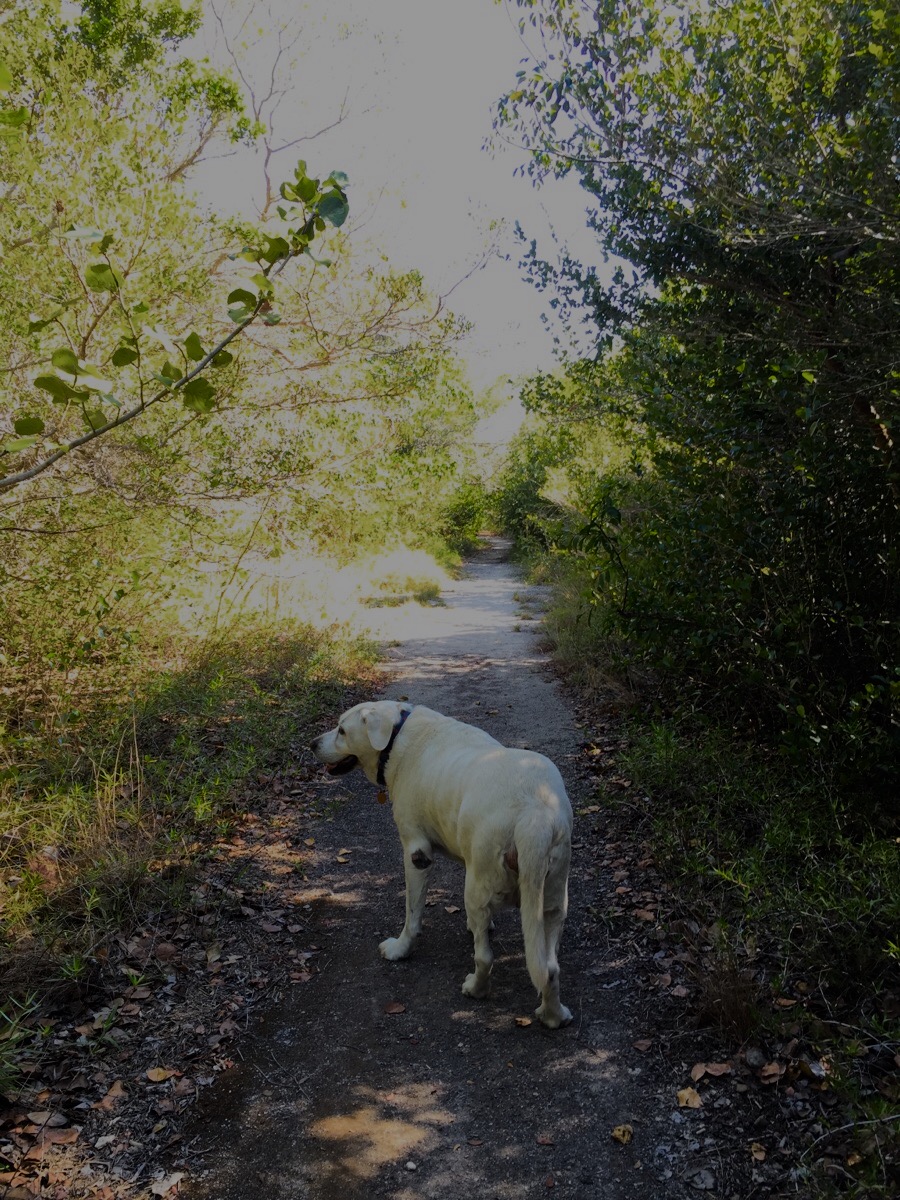 A nice couple in a car pulled  up as I was studying my latest issue of Rider magazine and asked about the trail. I wasn't sure what to tell them as these woods hold few surprises; no hills rivers lakes or views, what you see is what you get.  They walked and I did not see them again. Maybe the ghosts of the Bay of Pigs fighters who trained here rose from the undergrowth and got them. Or maybe Cheyenne and I left before they returned. 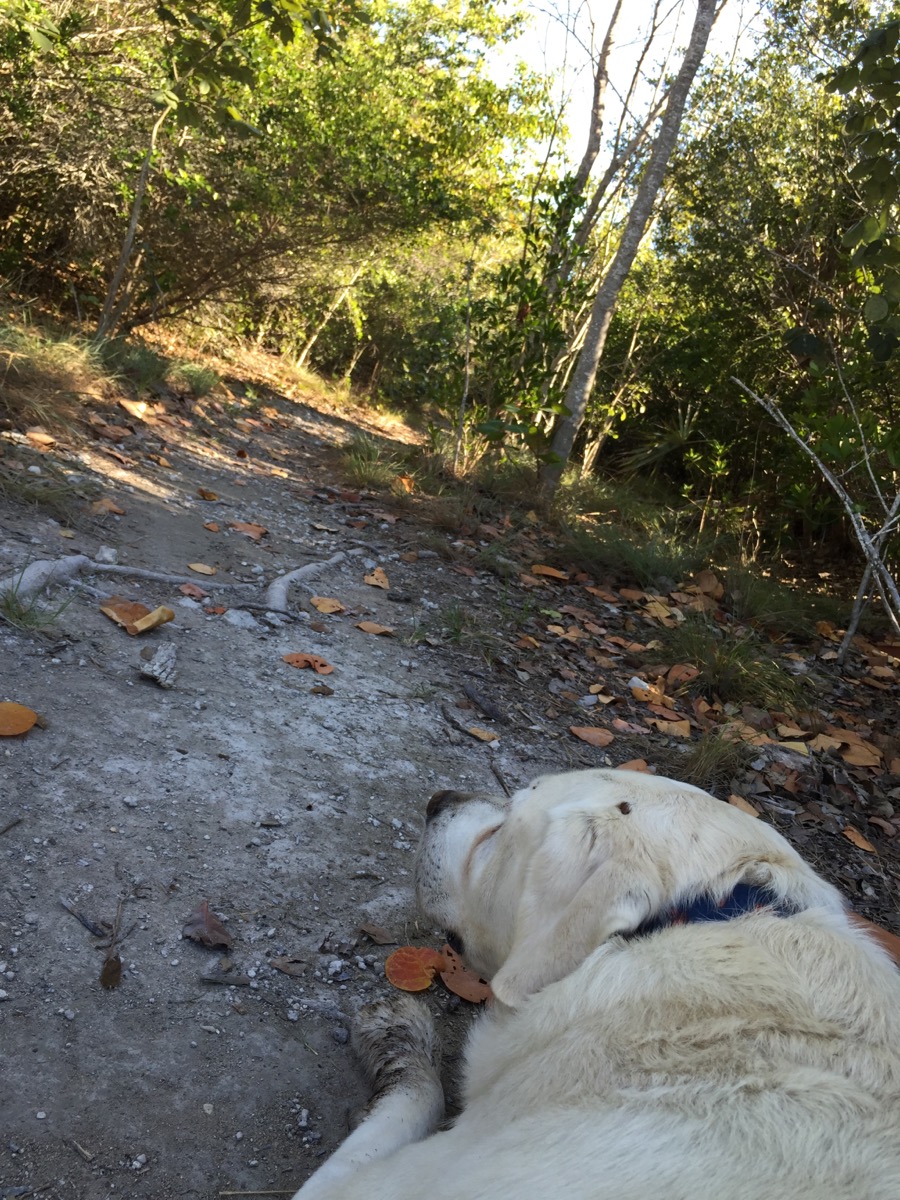 It was a busy afternoon on No Name Key Tuesday. Cars were coming and going like they didn't get the message that winter is over and its time to go North again. Then I heard the bizarre sound of an infantry platoon marching up the road, boots crucnhing in perfect cadence. I hardly dared look up. 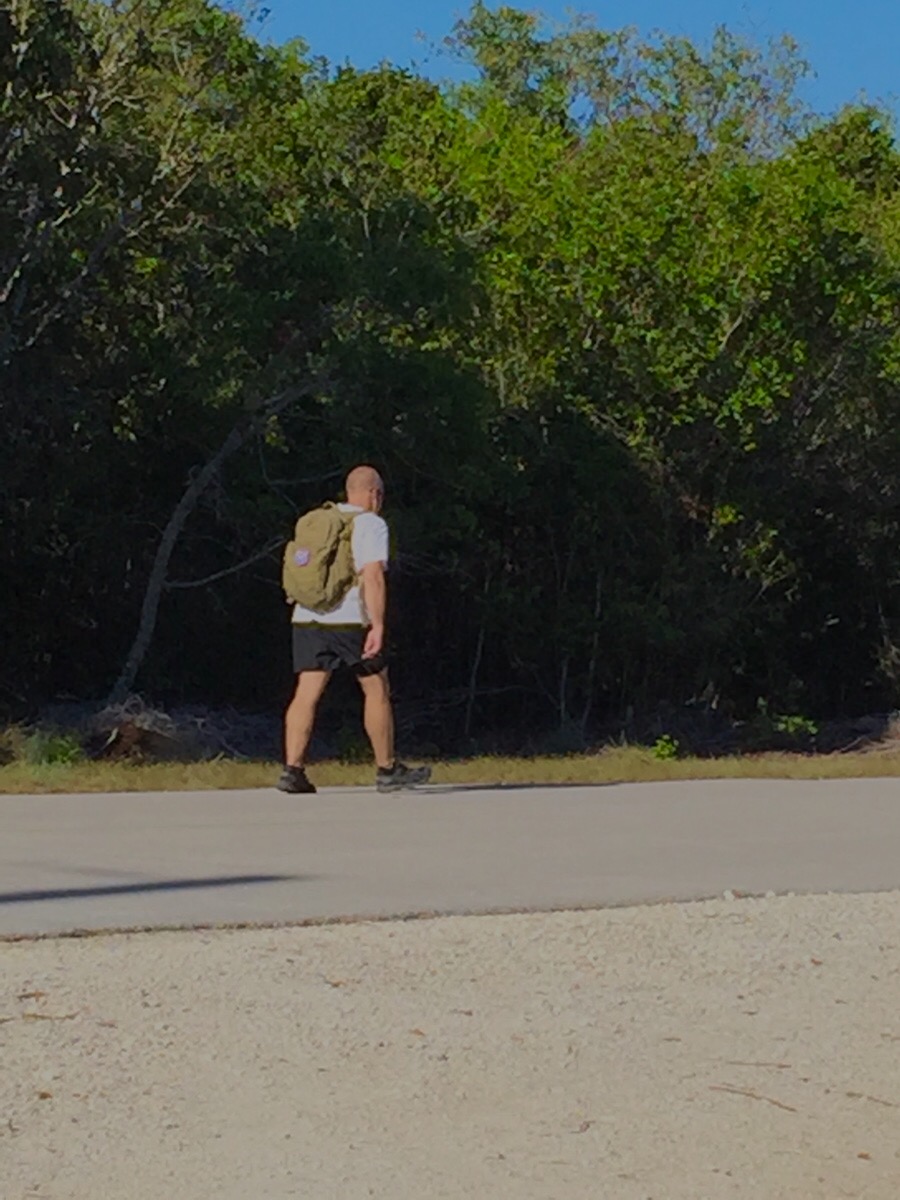 He strode by pounding the gravel to the inevitable dead end a hundred yards to the right. All side roads in the Keys end in water or mangroves often with red diamond shaped signs that indicate the land has run out. You can see tentative drivers driving ever more slowly as reality sinks in and they face the prospect of making a u-turn in a street far narrower than they are used to maneuvering at home. I guess this guy just had to make a smart about face. 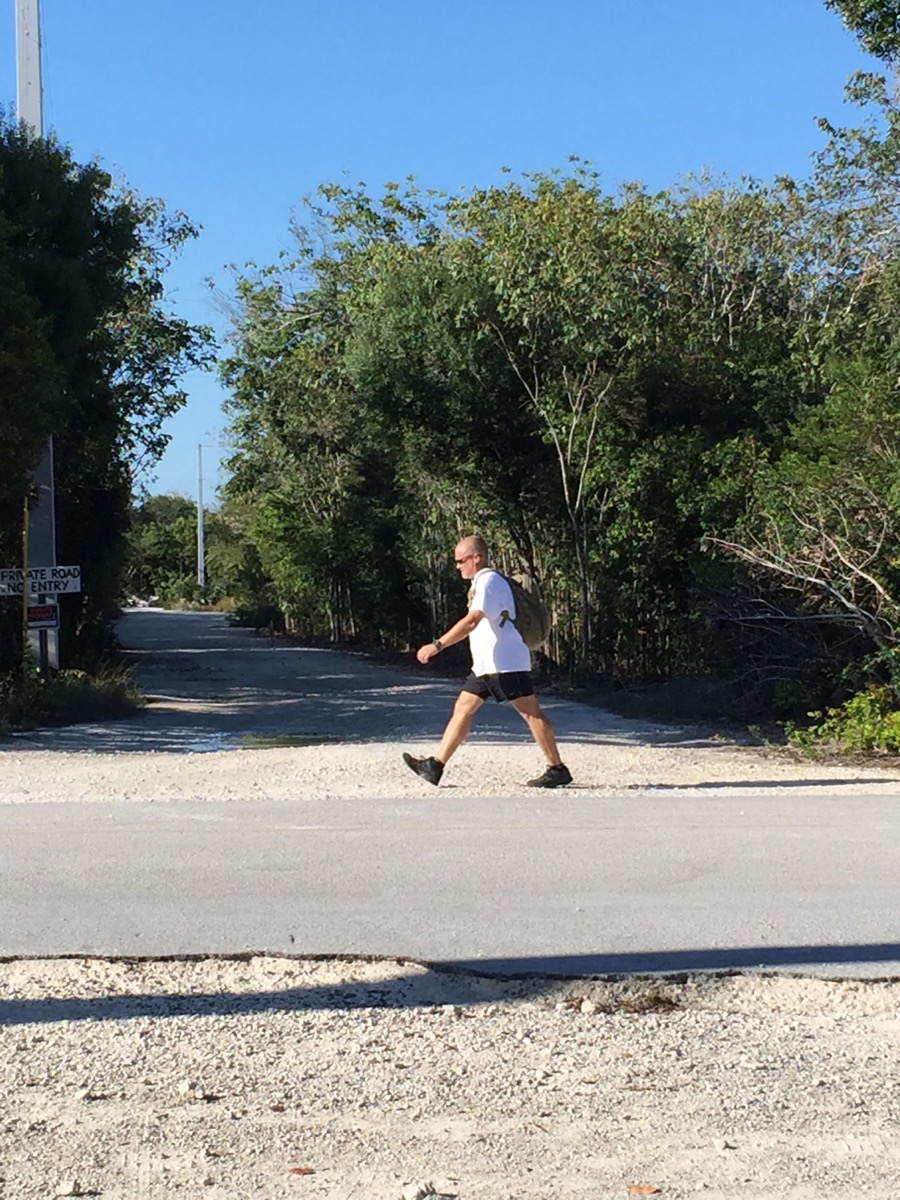 Marching dude crunched his way back. I don't know if he was exercising or looking for a destination and got lost but he was striding along with his ear buds in place...he put me in mind of Dominique Pinon in the French thriller Diva which I note is only available on disc on Netflix. Hmm, that's one of those flicks that is long overdue for another viewing.

He disappeared, all sinews braced, and I hung out with my dozing dog long enough he had vanished by the time I drove past No Name Pub toward my date with destiny, food shopping at Winn Dixie. 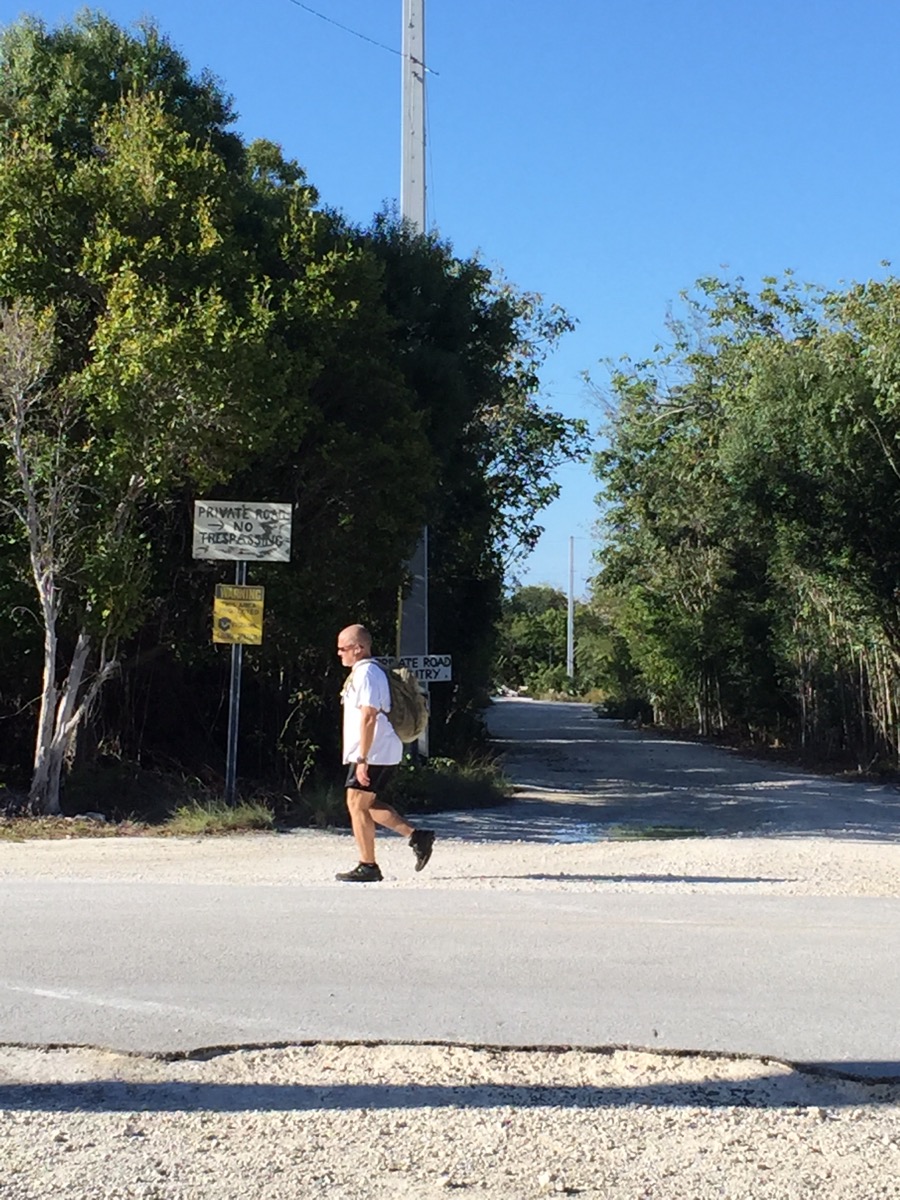 Just to confirm the point that I am all wrong about it being time to leave, a boat arrived  and edged its way into the development of houses nestled behind a barricade of No Trespassing signs. 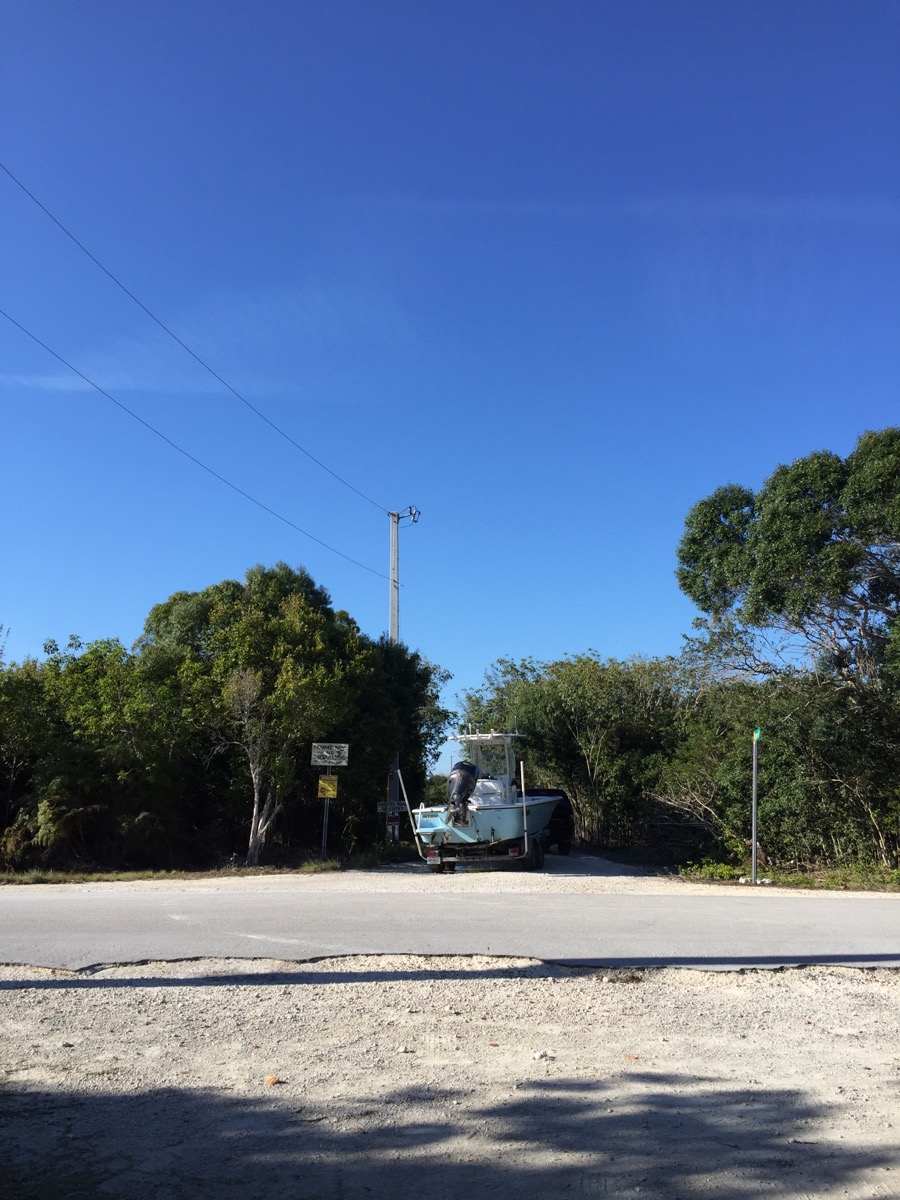 None of this excitement got a reaction out of my dog. Indeed by the time I had to leave in order to be at home cooking dinner by the time my wife got back from work, Cheyenne was still grumpy about being woken up and asked politely to get in the car. She got up as I approached her, then when I turned my back to lead her to the car she flopped down again, her way of asking for more time. Headline: wife trumps dog - Shock! Horror! 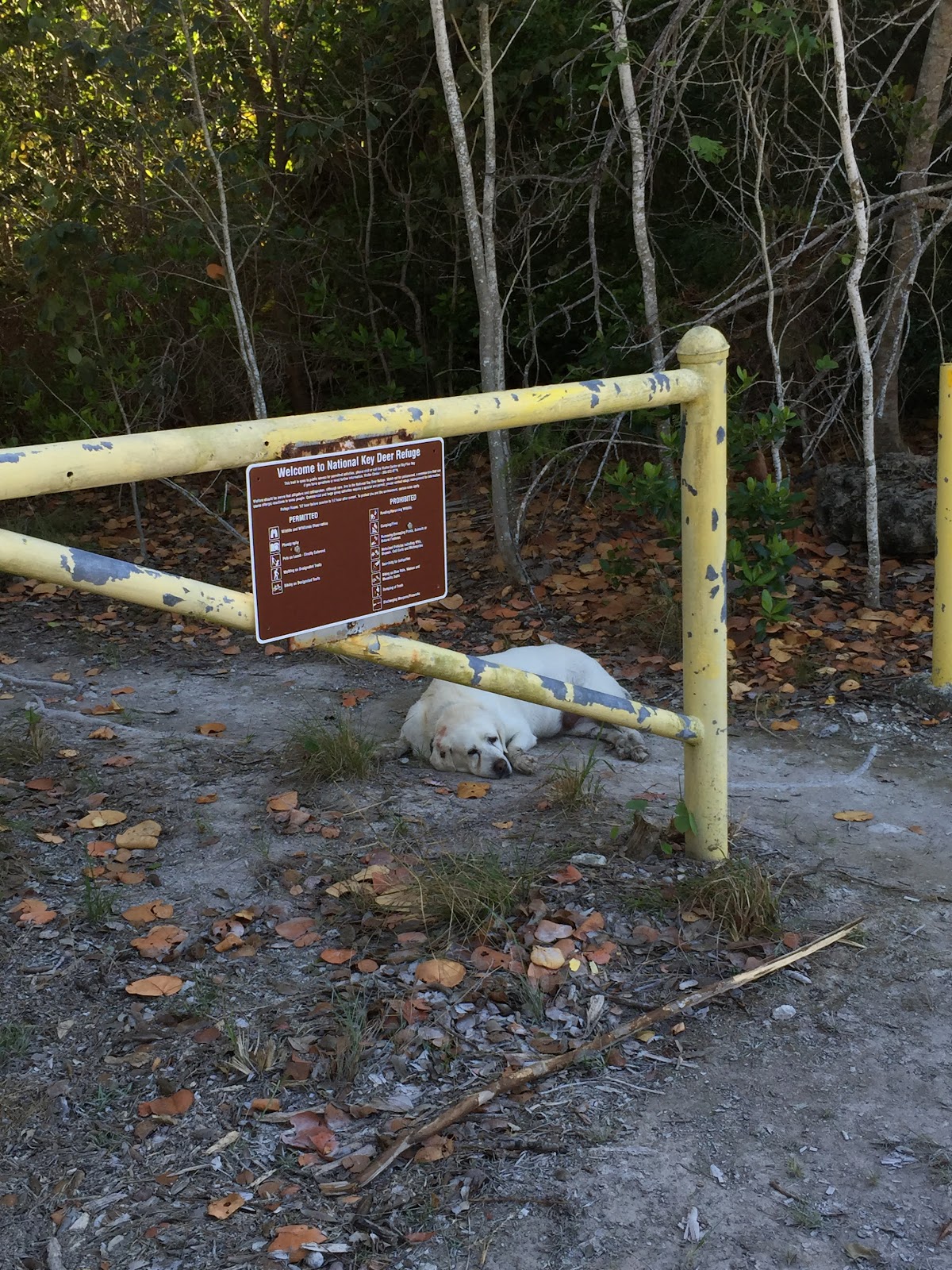 I had a late shift at work and the moon was shining bright on the world when I left home. I wanted to turn off the Vespa headlights and ride in the dark but that seemed a tad foolhardy on the Overseas Highway. Besides, the theme of the day continued and even at one in the morning there seemed to be far too much traffic on the Highway! 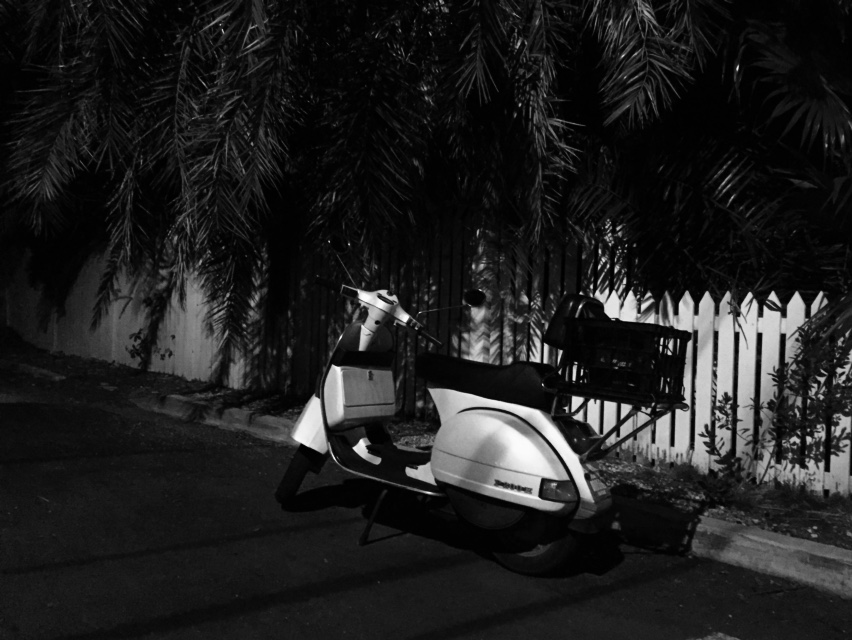 I took the picture for the scooter tag game I'm playing on ADVrider. I liked how it came out.
Posted by Conchscooter at 12:00 AM 1 comment: