I love this spot. They've taken to callIng it Scout Key for the Wesumkee Camp on the island. Wesumkee is derived from West Summerland Key which is the real name of this island. Why it lies to the east of Summerland Key no one knows but submerging eccentricity is a shame. Let them call it Scout Key, I shan't for I like this place too much. 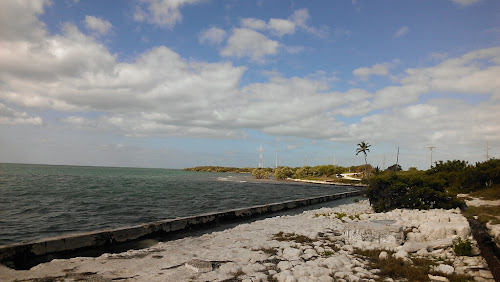 Just east of here lies Bahia Honda State Park which is more than a beach, it's also an historic site. However this side of the deep bay (Bahia Honda) lies a little bit of history too. The World War Two water pipe, the first utility connection to the mainland used to supply the wartime military in Key West: 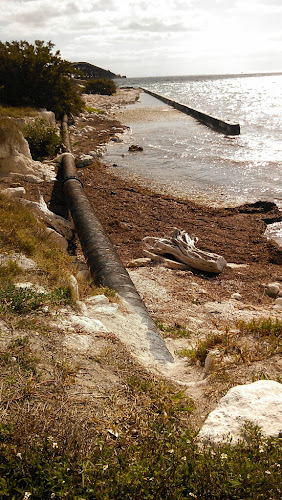 Dead seaweed tends to wash up here of course but Cheyenne, the world's only non swimming Labrador, enjoys a dunk, seaweed or no: 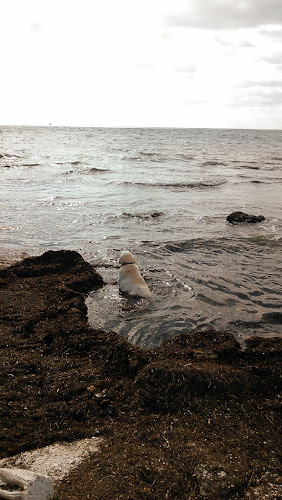 I prefer nature's art to the art of industrialized waste production. There aren't enough trash cans apparently to encourage visitors to do the right thing and trash cans are everywhere here in this informal park space. 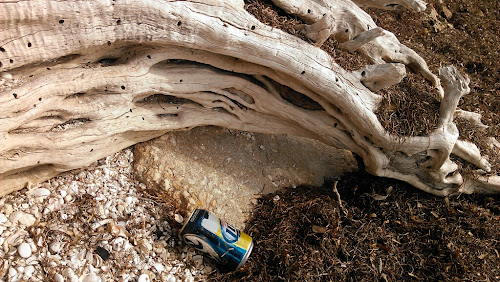 The other thing I like about this place is the fact that it is a hill, the only such slope in the Lower Keys. 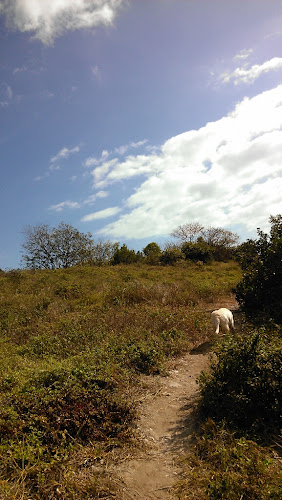 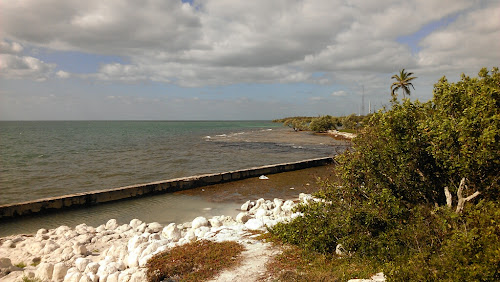 I remember well our last trip to Puerto Rico, parking the car and stepping out onto a hillside and looking east toward the Virgin Islands. I looked out across the water and suddenly I noticed how impossible such a view is in the Keys. Looking down is a rare privilege. 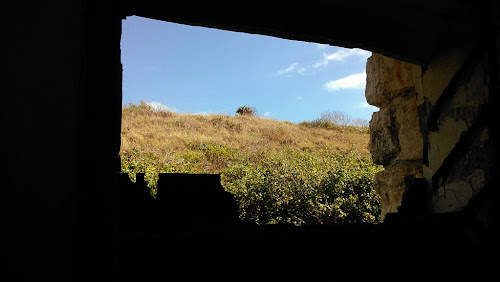 There it is again, that uphill slope. This time seen through the frame of an old window in an elderly stone pump house along that old rotting water pipe. 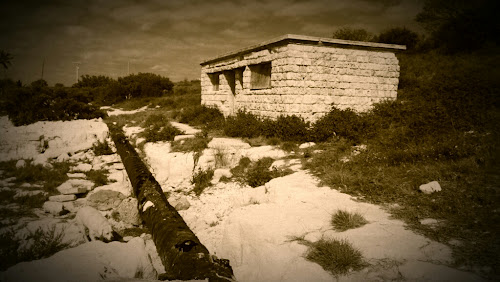 The pump house now is a shell, a few wooden shelves built into the wall, piles of shit, crude graffiti, all the usual debris of a society with no stake in the outcome. 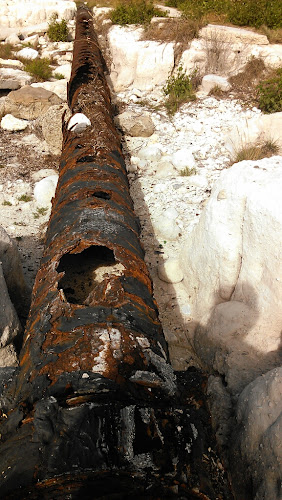 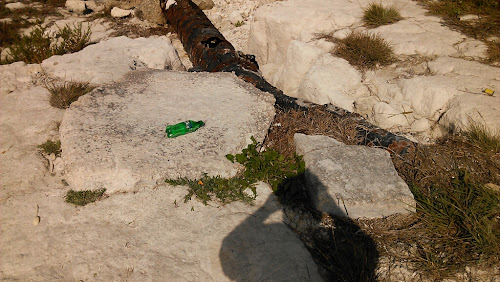 Yes indeed, I love this spot. 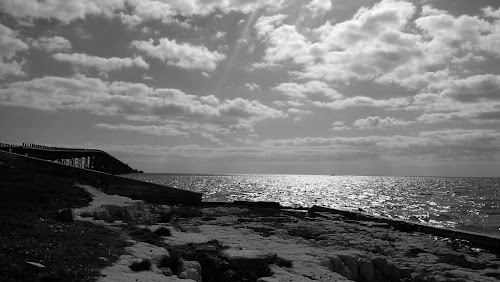 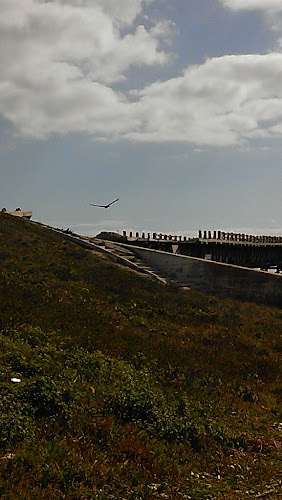 The old road was built on the rialroad bed in 1938 and abandoned in 1982 when the new highway was opened. The top of the hill used to be the jumping off point for the intricate Bahia Honda Railroad Bridge. 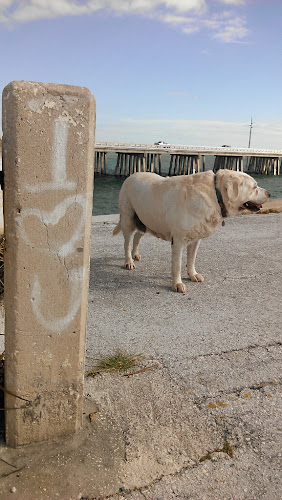 The state bought the railway after a hurricane wrecked the poverty stricken rail line and in a love impossible to imagine in these mentally retarded anti government times, the state built a road. 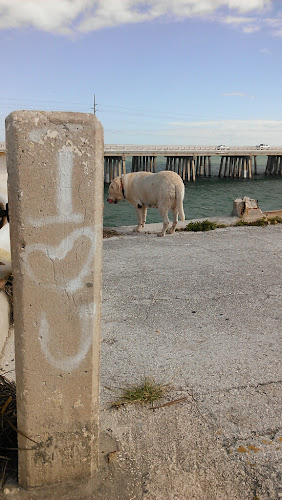 On the old road with my Vespa it took me five hours to drive to Homestead from Key West. The new road cuts that time in half if I am determined to get there... 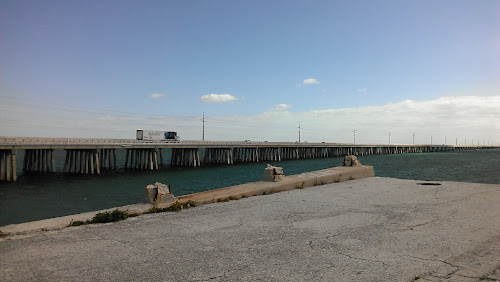 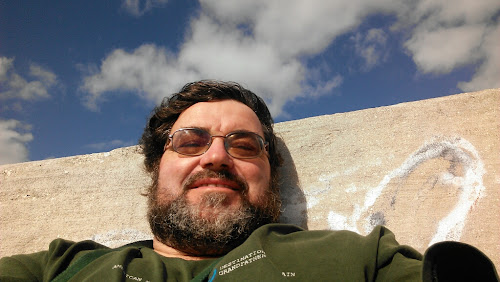 We like hanging out together my dog and I. This is a good spot to do it, early on a Sunday morning when everyone else is on their knees or nursing a hang over, depending on which altar they worship at on a weekend. 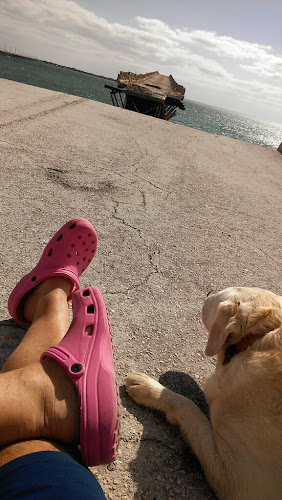 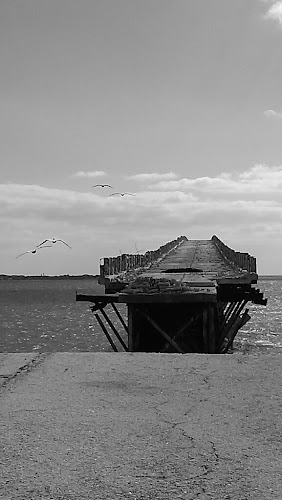 It's a good spot to visit from time to time. The only hill in the Lower Keys.